The "Make You Famous Trip" 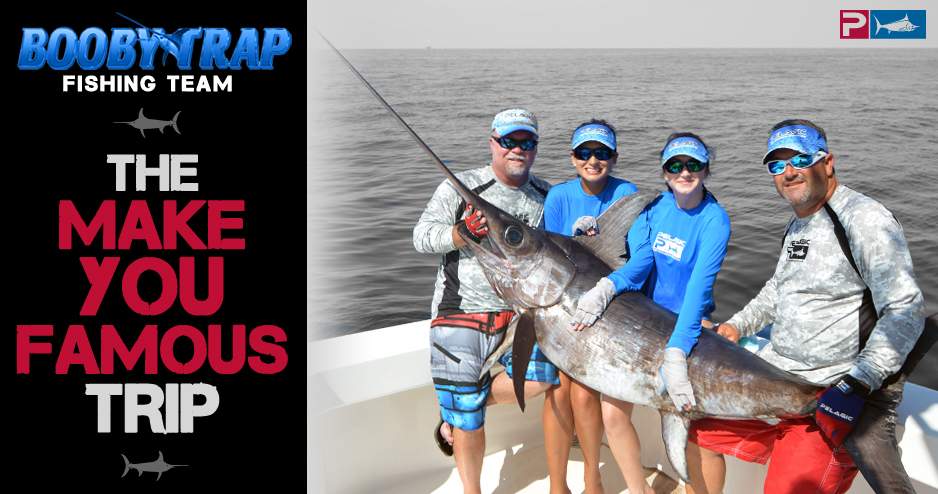 The “Get Tight Sucka! Texas Swordfish Seminar” had one of its best years, held in March 2013. The seminar aims to raise money for the charity Everyday Heroes. Everyday Heroes is a nonprofit organization that focuses on getting US veterans transportation to and from medical appointments and more – even wheelchairs and wheel chair ramps to their homes. One of the main highlights of that success was the “Make You Famous Swordfishing Trip” that was auctioned off by the Booby Trap Fishing Team.

This trip was donated by Holden Roofing and the Booby Trap Fishing Team. The trip was auctioned off and the winning bidder for the second year in a row was John Duffy of Richmond, Texas. The trip was for two people to join the Booby Trap Fishing Team on a multiple day swordfishing adventure, departing from Surfside Marina and fishing 100 miles off the Texas coast, with the main goal to target daytime and nighttime swordfish. The trip went for just under $17,000.00 and 100 % of all the proceeds went to the Everyday Heroes.

The Seminar, held at Surfside Marina in Surfside Beach, Texas, is presented by Brett Holden and the Booby Trap Fishing Team. With the help and promotion of The Waterman’s Journal, the event has grown into the largest swordfishing-specific seminar in the world. The first year, 2011, approximately 500 fishermen attended to learn how to catch and target swordfish from the best in the world, Brett Holden and the Booby Trap Fishing Team. In 2012, attendance was over 1200 people, and 2013 saw an estimated 2000-plus fisherman from around the US and even other countries attended the Texas Swordfish Seminar, raising around $500,000.00 in the three years with 100 % of the proceeds going to the Everyday Heroes.

Below: A large crowd gathered at Surfside Marina for the 2013 Texas Swordfish Seminar put on by the _Booby Trap _Fishing Team. The ticket attraction, of course, was the "Make You Famous" Trip being auctioned off. 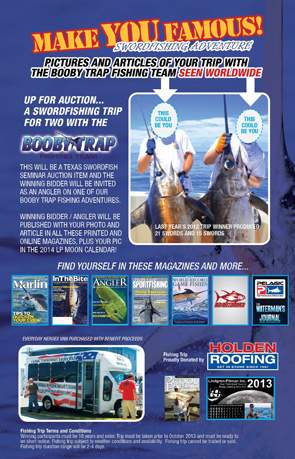 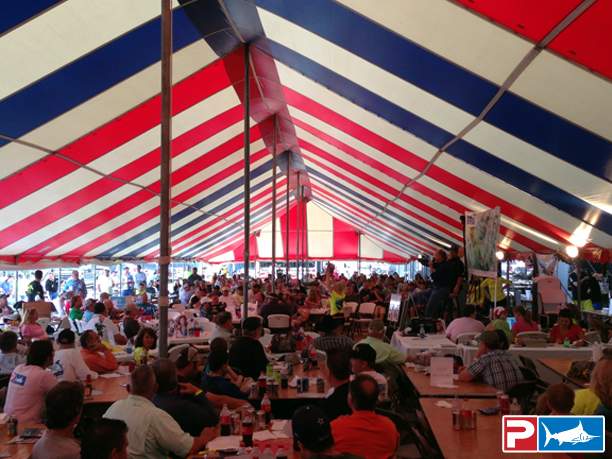 The Booby Trap is a 52’ Viking Express owned and operated by Brett Holden, AKA “Capt. Ahab”. Capt. Brett’s fine crew consists of Capt. Jeff Wilson, Capt. Travis Joyce, and newest member Capt. Matt Reed. The Booby Trap Team has set the bars very high worldwide in swordfishing. The team has pioneered daytime swordfishing in the Gulf of Mexico and redefined techniques, perfecting them in many ways. Brett Holden and his crew have set the bars in numbers that may never be tapped worldwide with record catches like two separate 21 swordfish trips 2012, a 30 swordfish trip recently in June 2013, and ten different trips that produced 10-14 daytime swordfish in one day. The team has logged over 800 swordfish total and has caught right at 250 swordfish in their last 50 straight trips. The team has now been focusing on conventional tackle records more and started out by weighing the new Texas State Record of 494 lbs. this past June 2013, which was caught by guest angler Bryan Barclay.

Below: _Booby Trap _and their recent Texas State Swordfish Record. 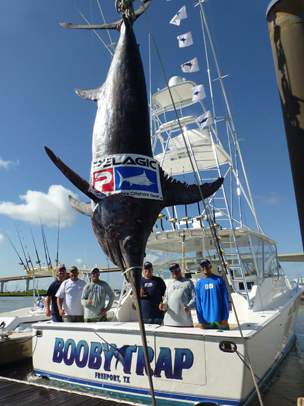 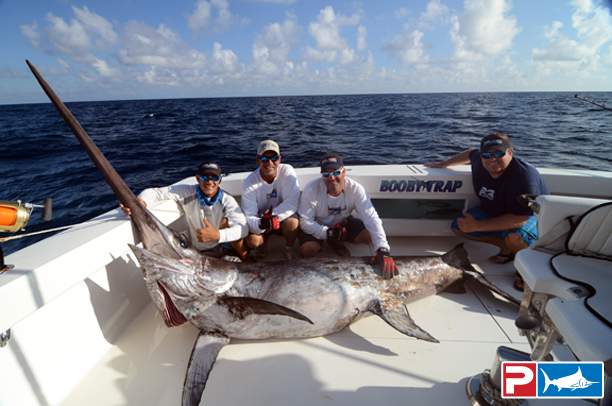 The trip donated from this year’s seminar was just taken. The crew consisted of Brett Holden ”Capt. Ahab”, Capt. Jeff Wilson, and first mate Capt. Matt Reed, with videographer “Miles”. The anglers for this trip would be John Duffy, his daughter Taylor Blair, Brett Holden’s daughter, Chelsey, whom is no stranger to big-game fishing. The story of the trip is as follows as it was told to me by Capt. Brett over phone from offshore, and also when he returned to the dock:

The Booby Trap headed out Thursday at Noon, July 11th for the 3.5 day "Make You Famous" Swordfishing trip. The girls were fired up! John Duffy had already said to Brett he was going to let the Taylor and Chelsey have all the swordfish fighting they could handle. First one in the chair was Taylor, and right out of the gate she nailed a 150 lb. swordfish after a one hour battle. Next Chelsey stepped up and a small sword was caught and released after a 40 minute fight. One more drop was made and the sun was falling which lead to Taylor handling another nice swordfish released of around 80 lbs. The night bite was a little slow with one Mako shark hooked and an 80 lb. sword caught by Chelsey, along with a pile of blackfin tuna jigged under the lights.

The next day resulted in one nice swordfish released after one drop. Brett, Jeff and Matt had been telling the Taylor, Chelsey, and John about the Grouper and Tilefish spot they had really been catching them at just a few miles away. The day’s plan changed with huge smiles. John and Taylor on one side of the boat and Brett and Chelsey on the other side deep-dropping with the LP-S1200, catching singles and doubles on big tilefish and grouper each drop.

Below: First Mate Matt Reed helps Chelsea (middle) and Taylor with a nice daytime swordfish // The girls all smiles with their tilefish and grouper. 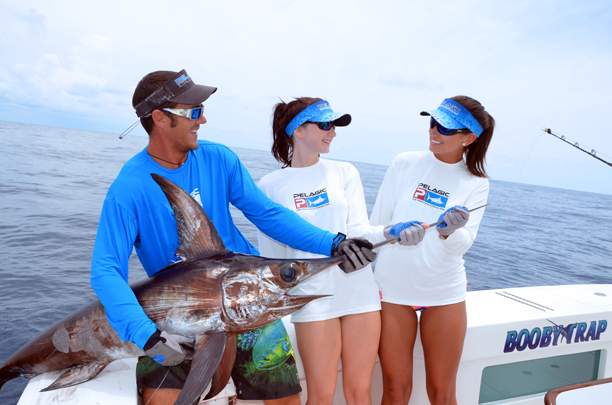 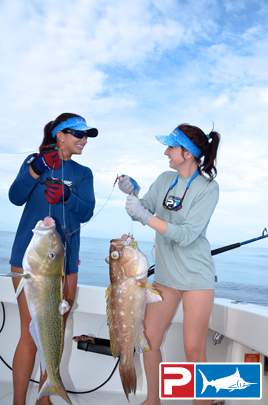 After talking with John that evening, Brett decided to make a 30 mile move and go to an area away from the heavy weekend boat traffic and target bigger swordfish. The ones the girls had been catching were nice swordfish, but after releasing 23 over 200 lbs. on the 30 fish trip just a couple of weeks before, they had to give this new area a shot once again. It was Johns turn on the rod. The girls made it clear that John had to sit through one of these swordfish battles this trip. No matter what John said they were determined he was getting in the chair. The first drop was “the one”, a big sword was hooked and after seeing it jump, it was estimated around 450-500 lbs. Unfortunately, the hook pulled after few minutes.

The next drop resulted in another great shot. John has caught several swordfish in the 200-400 lb. range on Booby Trap in the past, but this one was going to fight harder than any of them! The sword whacked the BaitMasters squid, then whacked it again, and with each whack John would start reeling up. After seeing this, Brett yelled, “Drop it!”

John dropped the bait back to the sword and yelled, “I’m Tight Sucka!”

He took the rod to the chair and the fight was on. Brett, Jeff and Matt were thinking this swordfish is going to be in the 400-500 lb. range based on the way she was fighting. The big daytime sword was hooked in 1730’ of water and finally all the line was put back on the 80 Tiagra. The leader comes up and Brett grabs the wind-on leader as he sees the big swordfish, but can’t really get a good estimate on the weight. The swordfish then takes the leader from Brett and takes approximately 2000’ of line without stopping, straight to the bottom and then at an angle racing back to the surface. The swordfish jumps 2000’ behind Booby Trap and on the slick-calm day, you could see the white water. The sword was getting tired now and so was John – it had been 3 long hours hand and hand with the big broadbill.

Below: John Duffy hooked up to a fighter as Capt. Brett Holden looks on // The big sword breaching behind Booby Trap . 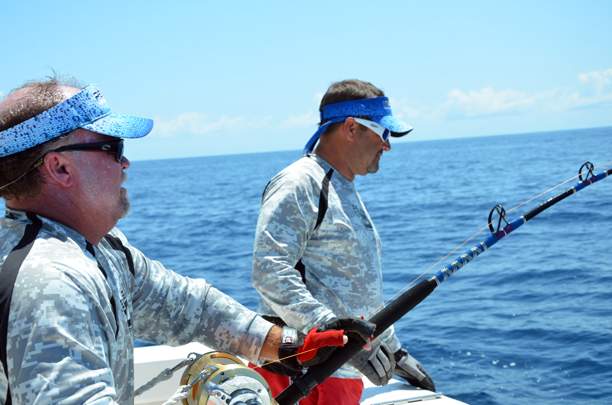 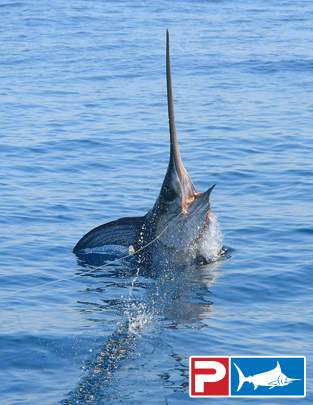 Once the Swordfish was boat side the crew was amazed. The swordfish was hooked deep and laid over, so it was then pulled in the boat and estimated at a shocking 275-300 lbs., although it fought more like a “nickle” (500 .lb class fish). Brett and Jeff just scratched their heads and Matt started to laugh. John grabbed about three Gatorades and ran for the air-conditioned helm.

Taylor and Chelsey asked if they could catch more grouper and tilefish, and that’s just what they did. The crew picked up and ran about 3 miles to another grouper- tilefish area and the two teams were back at it rounding out the limits of yellow edge grouper and big golden tilefish. After the fish box in the back of the boat was full of swordfish, tilefish, and grouper, the crew headed back on a 27 mile slow troll to spend the night and get a good night sleep.

Below: The "Make You Famous" group (John, Taylor, Chelsey) with Capt. Ahab // Golden Tilefish caught by the girls on one of Booby Trap's marked deep-drop spots. 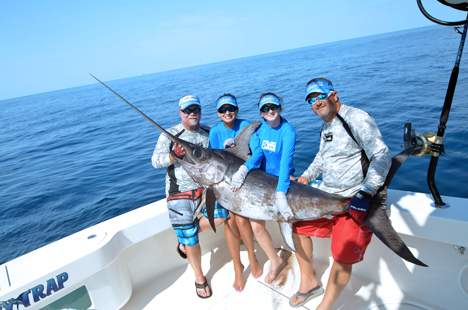 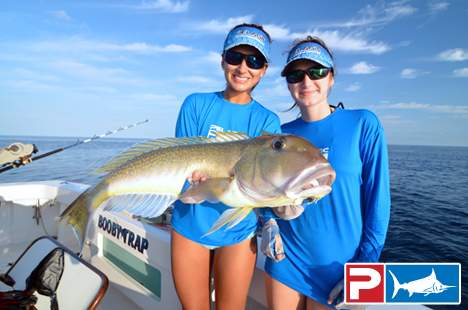 Brett tells me the next morning that Taylor and Chelsey both decided they wanted to catch more swordfish. The run to the closest daytime swordfishing spot was about six-miles from the night’s drift. The bite was on! This was the last day of the trip so Brett, Jeff, and Matt decided to break out some double-header action. The Booby Trap Fishing Team has logged over 30 double headers on swordfish and this would be the first attempt this trip. First sword is on. The second reel is down and whack-whack but no hook up. Same thing happens over the next four drops, but finally they produced one double-header and a total of five swordfish caught one the last day in four hours of fishing - making it another ten swordfish trip.

John Duffy, as before, was a pleasure to have on the trip and his daughter, Taylor Blair, the same. These two did a fine job fighting the big swords and never gave in for one second. Brett's daughter, Chelsey Holden, has been fishing her entire life offshore and did a great job during this trip as well. It was nice having young blood on the trip, as they never got tired and never stopped fishing. The Booby Trap Fishing Team is looking forward to having a repeat trip with this same group in the future! John said he plans on buying this trip every year if possible at the Texas Swordfish Seminar/ Everyday Heroes Benefit.

Below: The customary swordfish release flag shot // The whole crew got together for one last pic before heading in and calling it a trip. 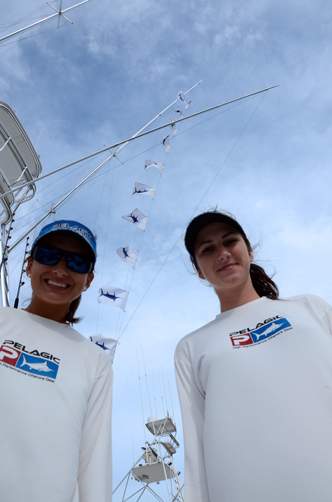 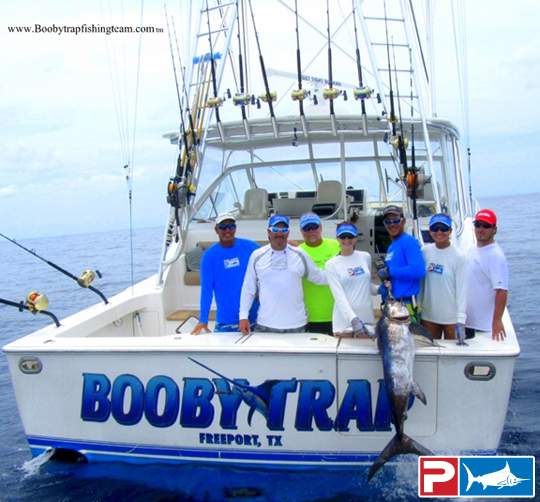 A special thanks goes out to all the great sponsors of the Texas Swordfish Seminar and everyone that supported and attended the last three years. We can’t wait to have you all back for the 2014 Seminar /Everyday Heroes Benefit. You can keep up with the Texas Swordfish Seminar by visiting ** www.Boobytrapfishingteam.com** . Make sure you visit “ Booby Trap Fishing Team” on Facebook, and also subscribe to their YouTube Channel to view their many swordfishing adventures!

VIDEO OF THE Booby Trap "Make You Famous" Trip...