Mahi Mahi, the fish so nice, they named it twice! Also known as dolphinfish, or dorado, the Mahi Mahi is one of the most sought after fish in the sea by fisherman because they are plentiful, strong fighters, and they put on a show of aerial acrobatics when hooked. Mahi Mahi may also be one of the most prized fish in the sea to take a photo with because of their beautiful color patterns. Regardless of what you call them, the Mahi is a fan favorite and we wanted to share a little more information about this amazing fish. 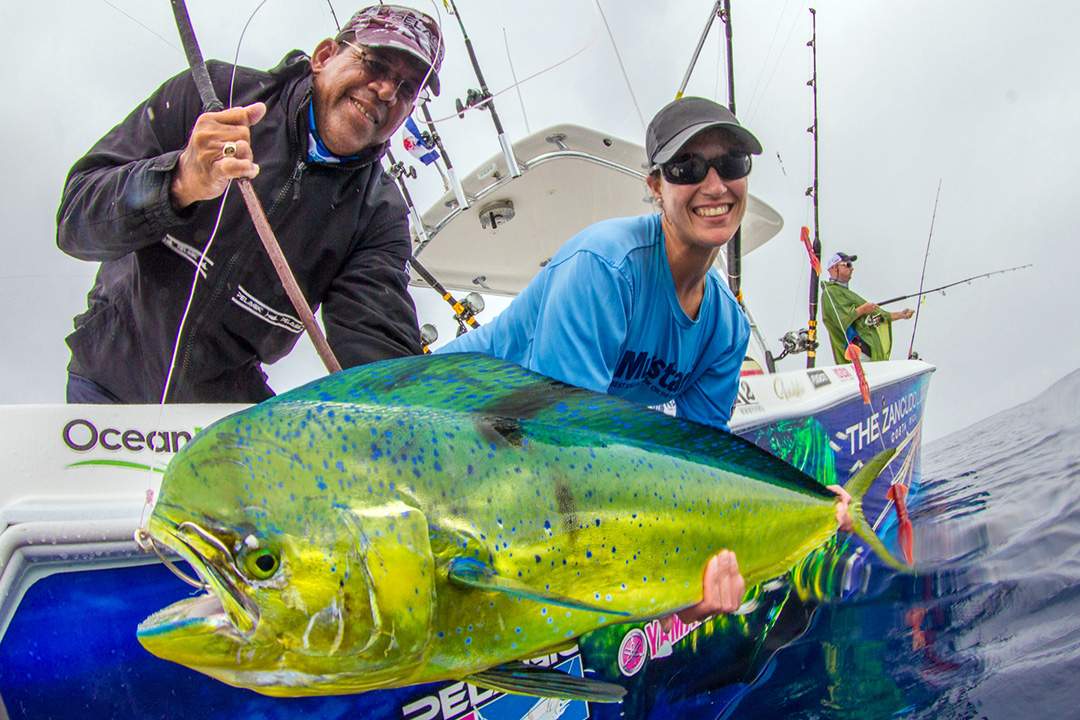 Mahi Mahi are easy to identify because of their bright color patterns and unique body shape. They usually are a vibrant green color with yellow and blue highlights, but they do alternate their colors to lighter shades of blues and yellows. They have special color changing cells called chromatophores, which are three dimensional, pigment containing, light reflecting cells, which gives them the ability to flicker their colors. These chromatophores are connected to the fish’s nervous system, which gives them the ability to change colors when they are excited and this is also the reason why their color fades when they die. 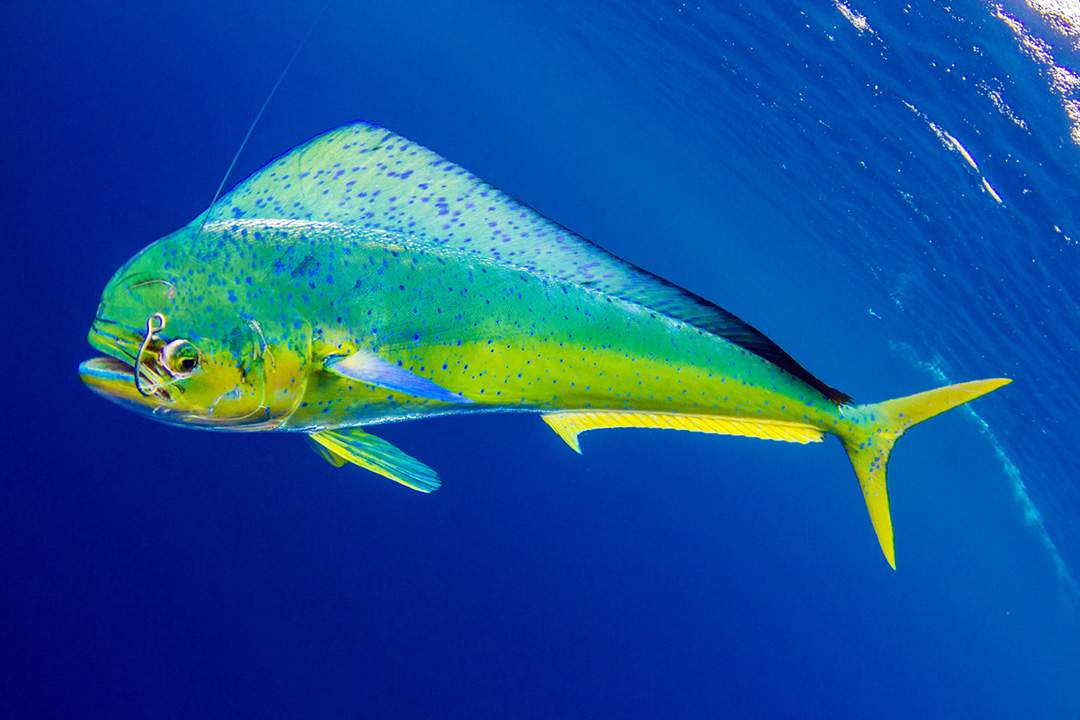 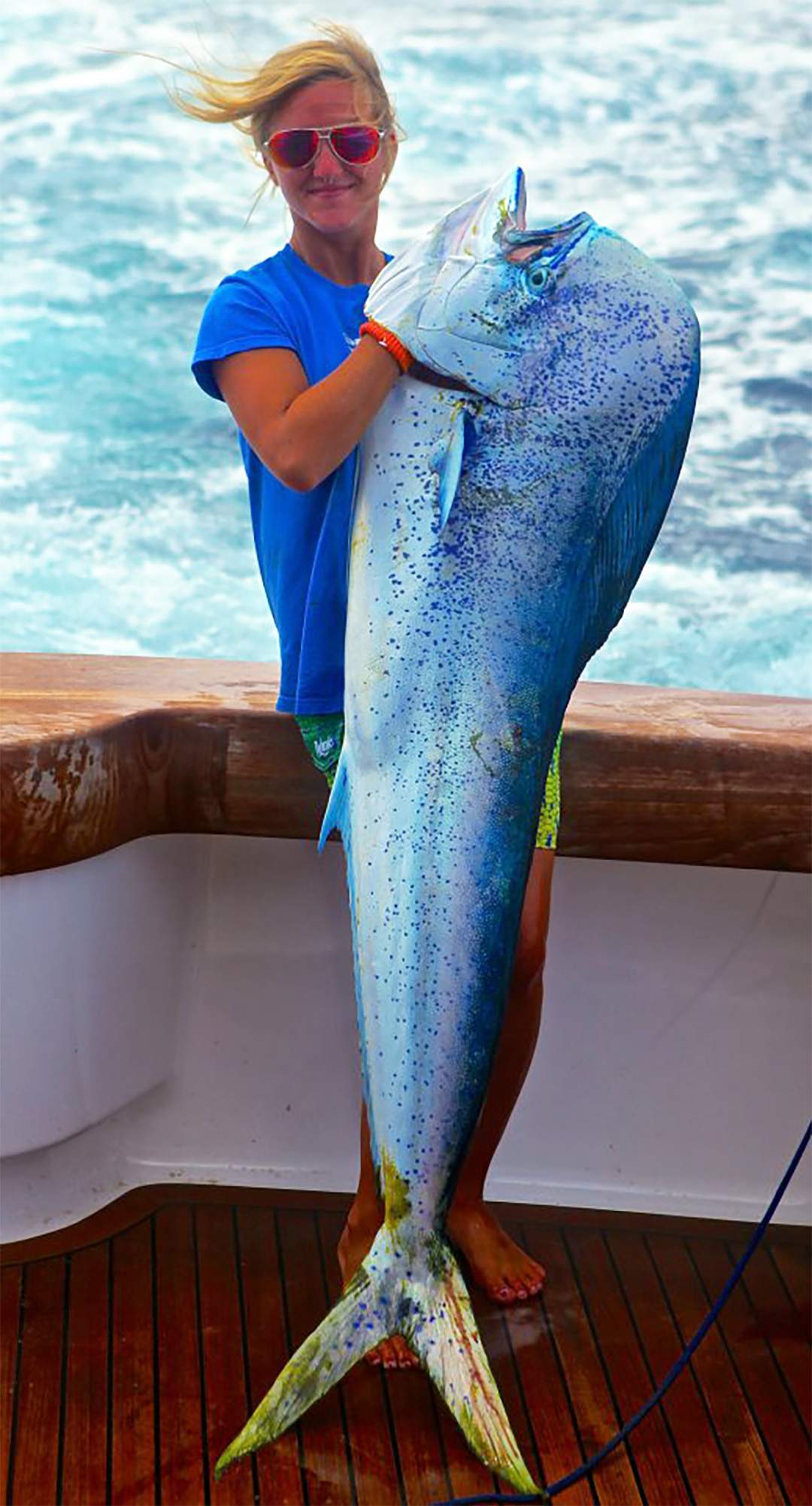 The Mahi Mahi has a long slender body that tapers into a blunt head, but the shape of the head varies with males and females. Male Mahi Mahi’s have a much more pronounced flat head, whereas females have a rounded out head. They are one of the fastest growing fish in the sea, reaching a length of four feet in the first year of life and reaching upwards of six feet within four years. They reach sexual maturity at four to five months of age and they reproduce two to three times a year with 800,000-1,000,000 eggs being released each time. They average Mahi lives two years, with some fish making it past the five-year mark. The IGFA world record Mahi Mahi was caught in 1976 off the coast of Costa Rica and it weighed in at 87lbs. 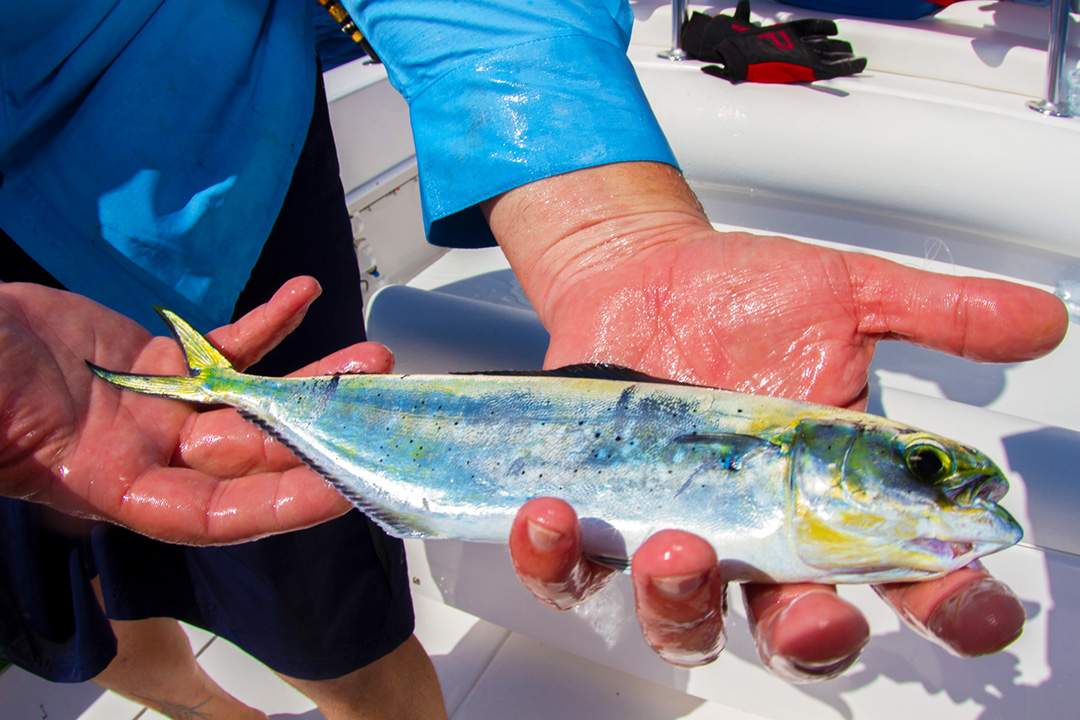 [In just a few months, this baby mahi will be double the size] 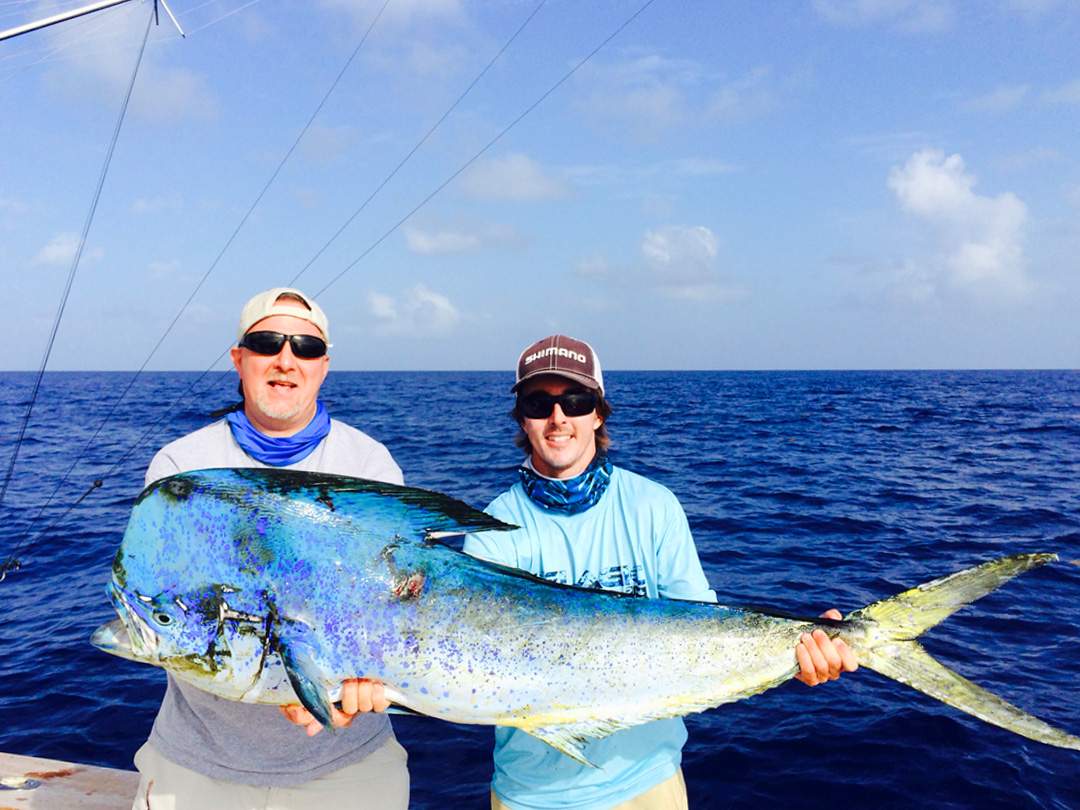 Mahi Mahi live in tropical and subtropical areas in the Atlantic, Pacific, and Indian Oceans. They live in the open ocean and will often associate with floating objects, such as sargassum weed, kelp, trash debris, and FAD’s, which all attract other forms of life that the Mahi will feed on. Mahi primarily feed during the day time, with some of their prey being small fishes, cephalopods, and crustaceans. Since Mahi grow at a rapid rate and are a popular table fare, this makes them a prime candidate for being farm raised. 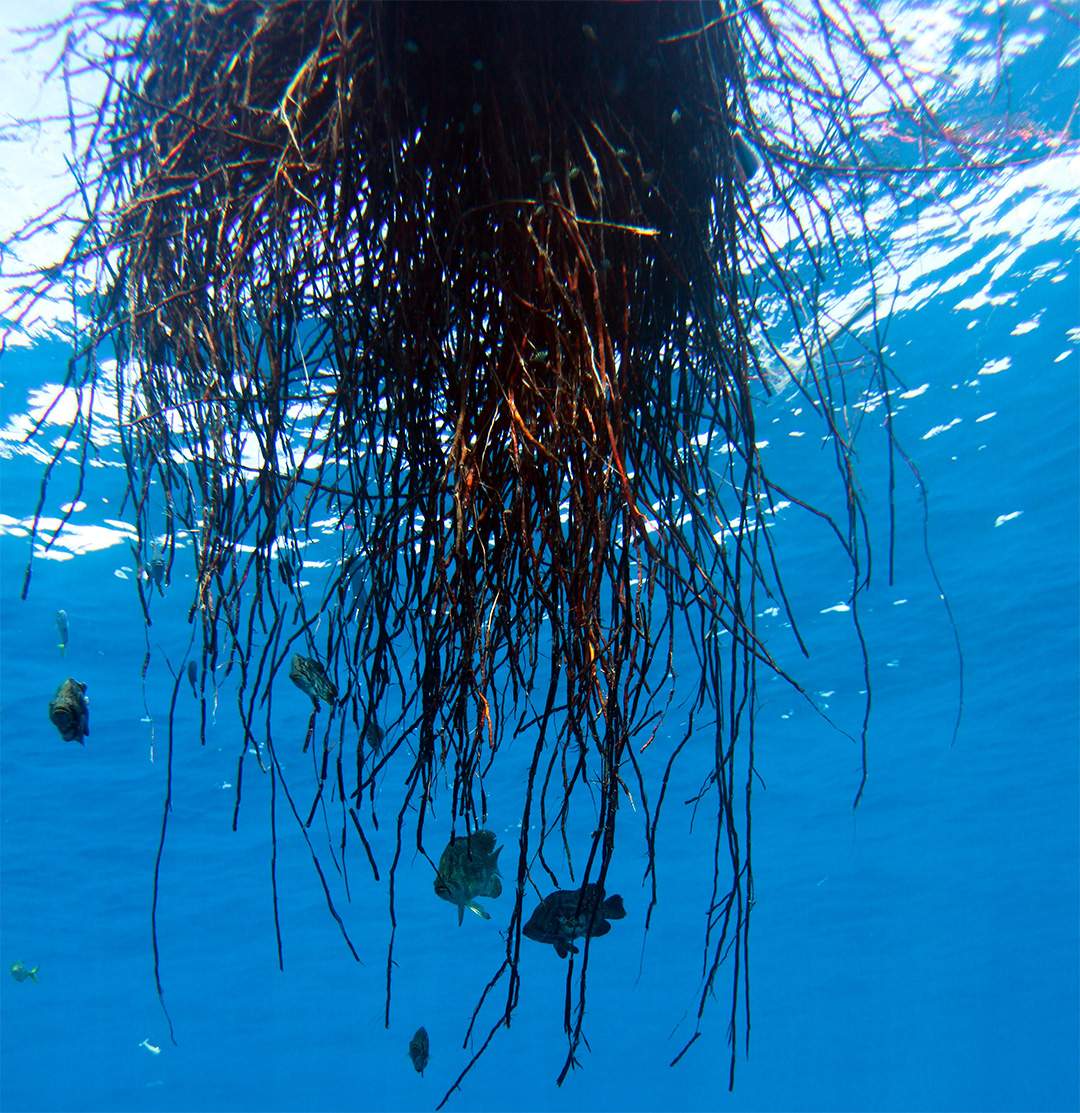 [Floating trees, trash, kelp, and many other floating objects are a floating haven for the mahi's prey/ Photo Courtesy of Steve Dougherty] 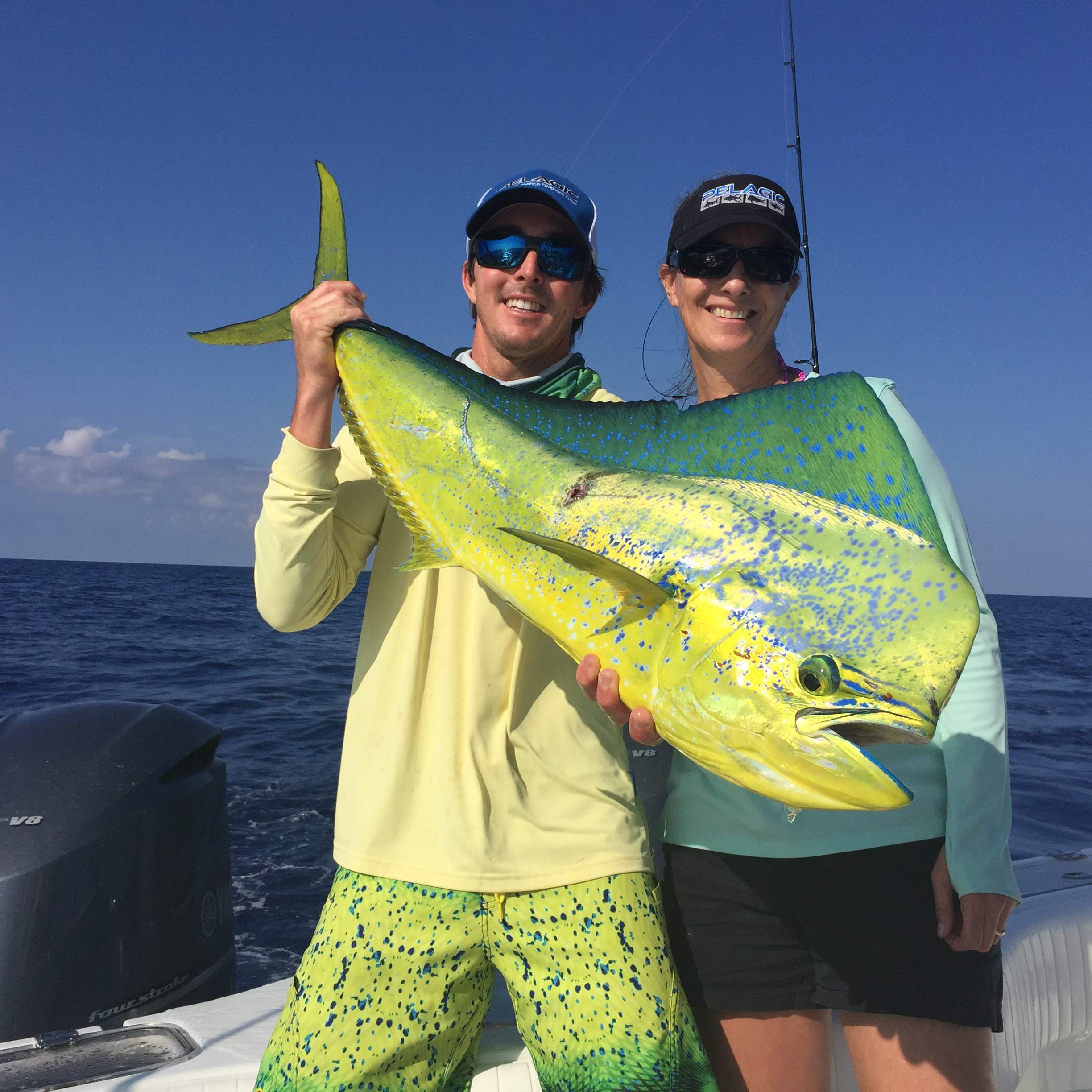