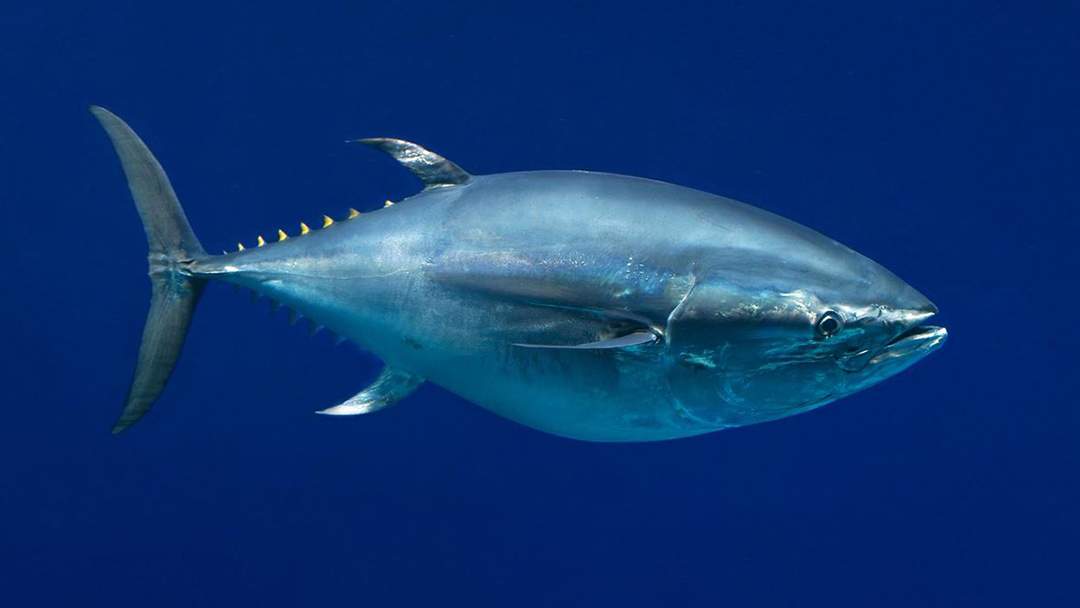 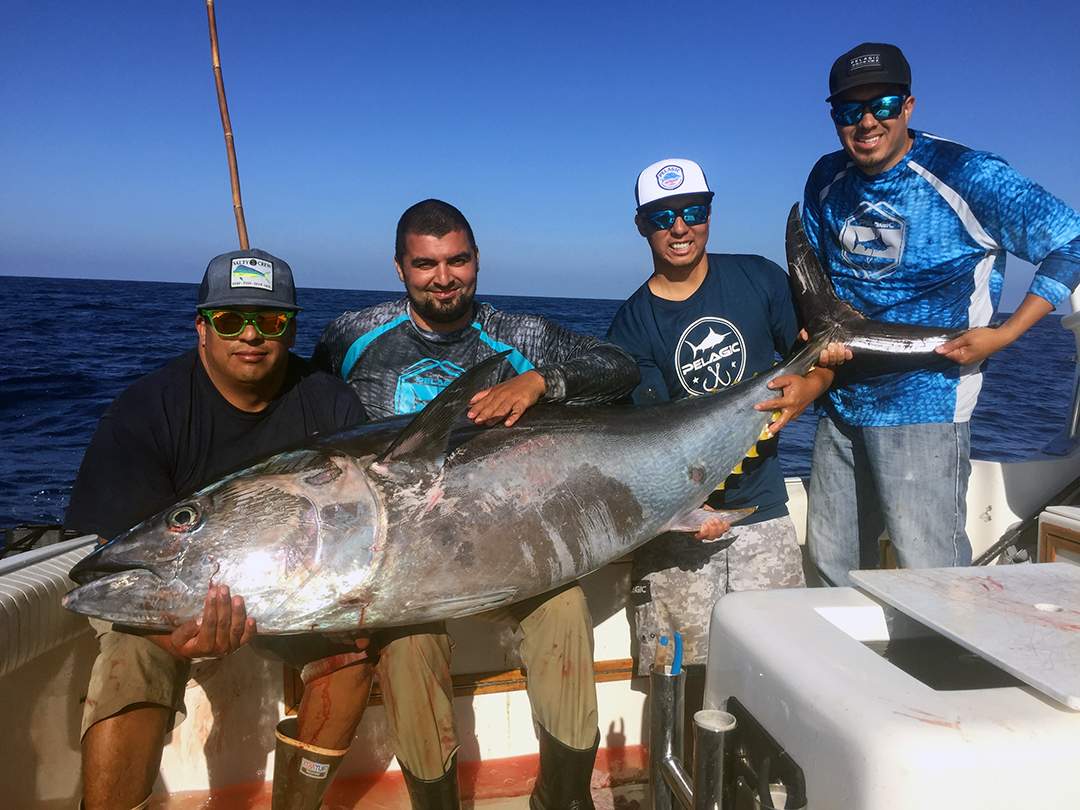 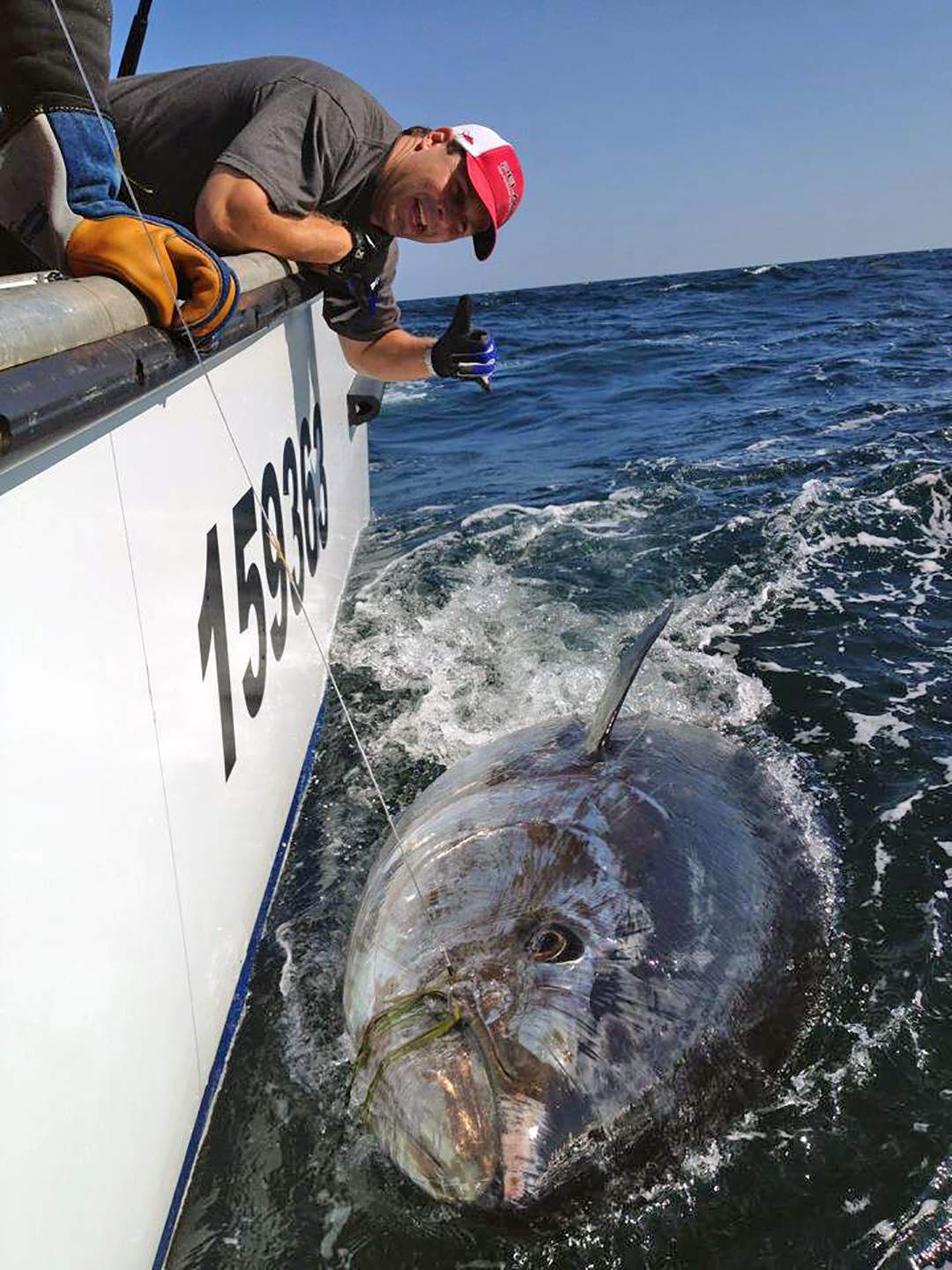 [Monster Bluefin like this one are caught off Nova Scotia, typically between July and October/Photo courtesy of Pelagic Pro Capt. Josh Temple]

Like other tuna, Bluefin have two dorsal fins that are depressible into grooves, which helps them reduce drag for faster swimming and bursts of speed. They have a pointed snout, small eyes, finlets along the top and bottom back half of their bodies, and a streamlined, torpedo-shaped body overall leading to a deeply forked tail. One noticeable difference from other tuna is that the Bluefin has very short pectoral fins. 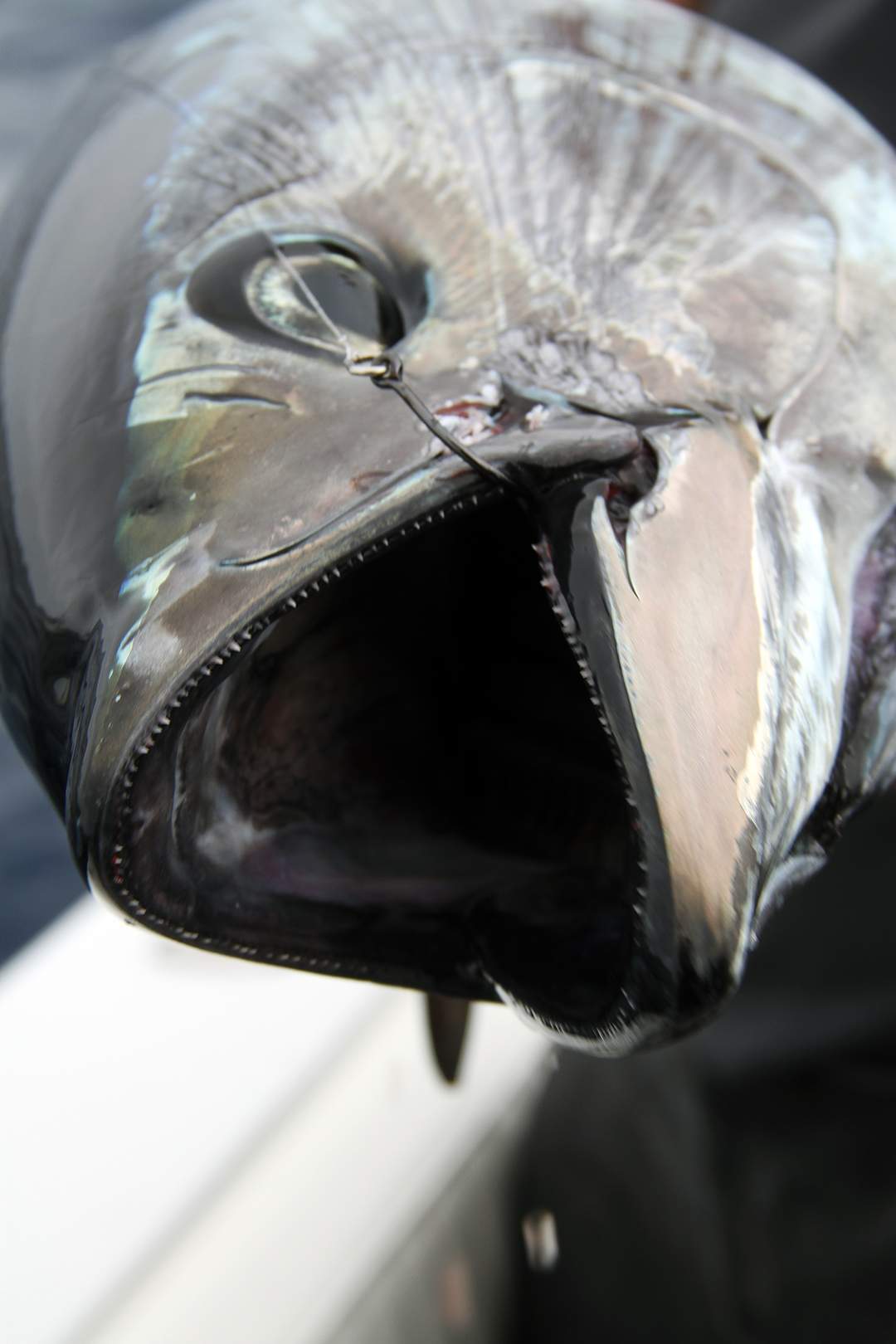 [No matter what size Bluefin you're after, circle hooks typically work best to keep the hook in the corner of the mouth and prevent breakoffs from their toothy craw]

Bluefin are strong, powerful swimmers with a body structure made for speed and raw power. As with other tuna yet different than most other fish species, Bluefin tuna are warm-blooded fish. They’re actually able to regulate and adjust their body temperature to their surrounding water which allows them to adapt to many different water conditions. 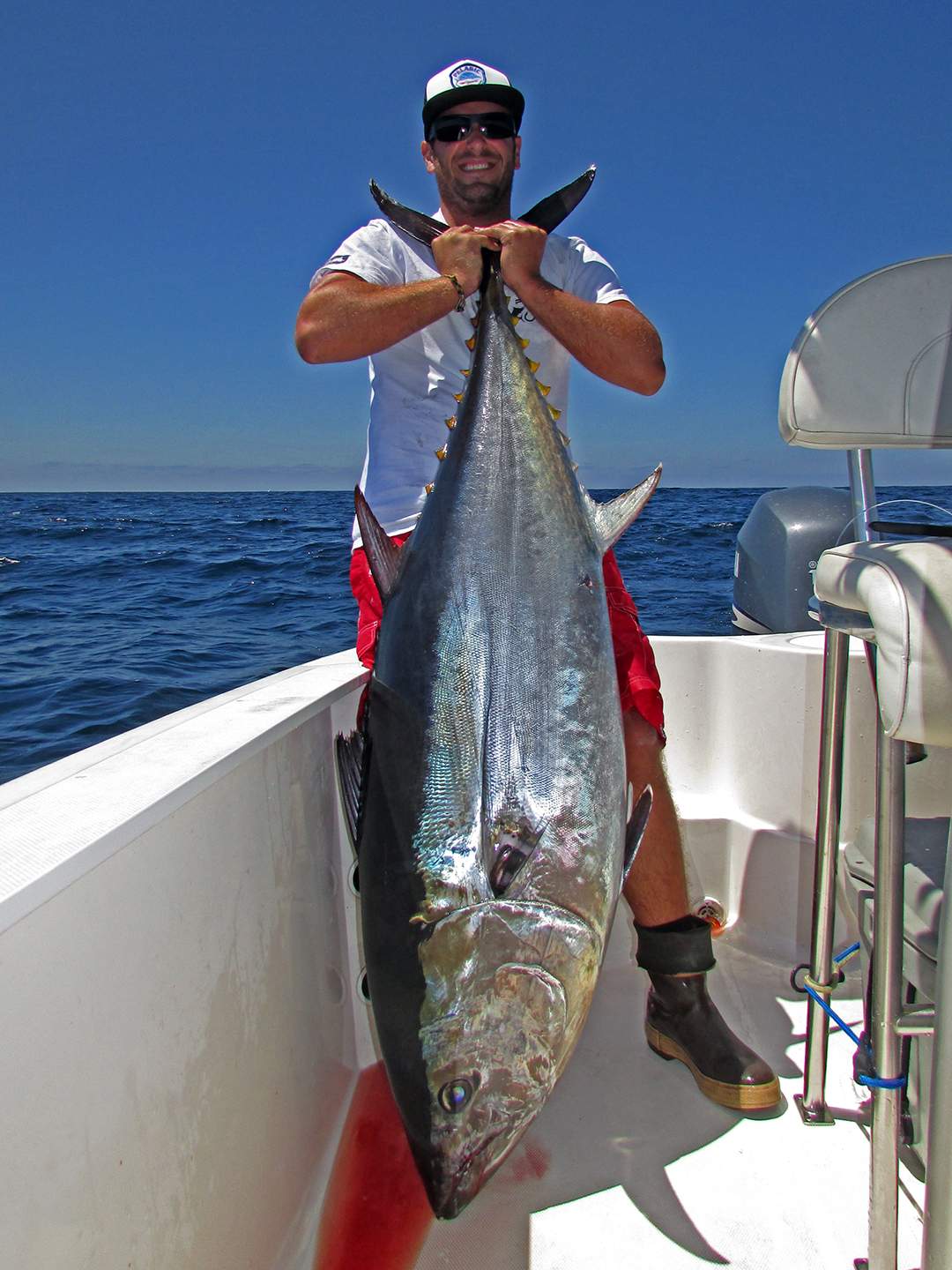 Bluefin tuna are the largest of all tuna species, particularly the Atlantic Bluefin, which are also referred to as Giant Bluefin Tuna. These fish can reach an excess of 1,200 lbs. with the world record fish weighing 1496 lbs. caught off Nova Scotia in 1979. The range of the Bluefin Tuna is wide reaching. Fish can be found off Japan, the western and eastern pacific oceans, New Zealand, French Polynesia, Mediterranean Sea, northern Brazil, Canary Islands, Austrailia and more. Because of the high value placed on Bluefin tuna, tuna aquaculture or tuna “farming” has grown significantly in places such as Japan, Mexico and Australia among others, to help with the worldwide demand. 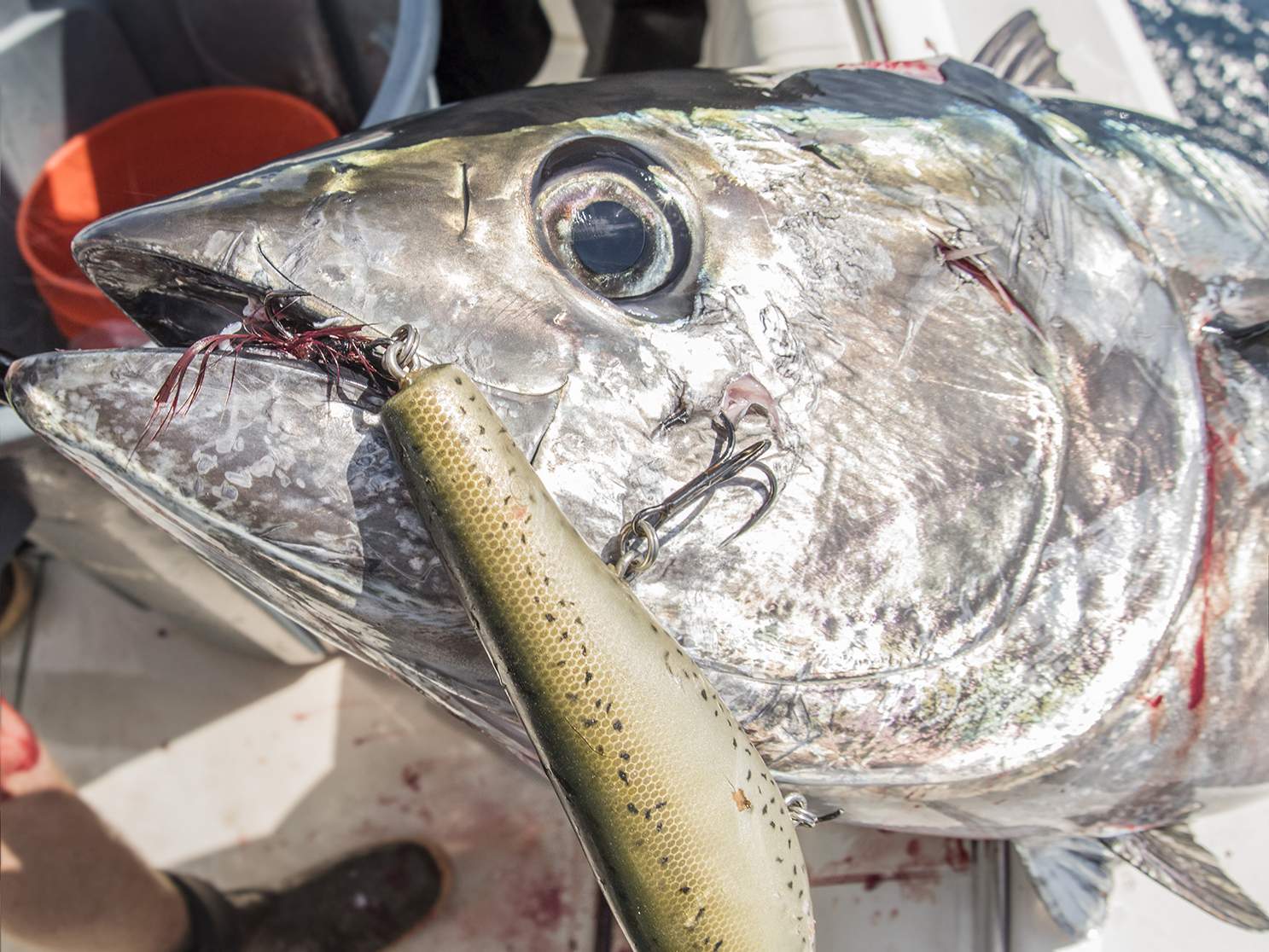 [Topwater lures and poppers will work at times on bluefin and make for an awesome visual strike/Photo courtesy of Pelagic Pro Capt. Evan Salvay]

The diet of the Bluefin tuna includes krill, many types of baitfish and squid. Naturally, most fishing methods and baits that mimic their preferred prey work best. Depending on the areas of the world, Bluefin will hit a variety of trolled offerings such as skirted lures and diving plugs. They can also be caught by cast-and-retrieve methods with swimming lures, jigs and poppers. Kite-fishing using live bait or soft-plastic baits works wonders on skittish fish. Live baiting and chunking is also an effective method, especially in areas such as the northeastern Atlantic and Nova Scotia where typically the largest Bluefin are caught each year. 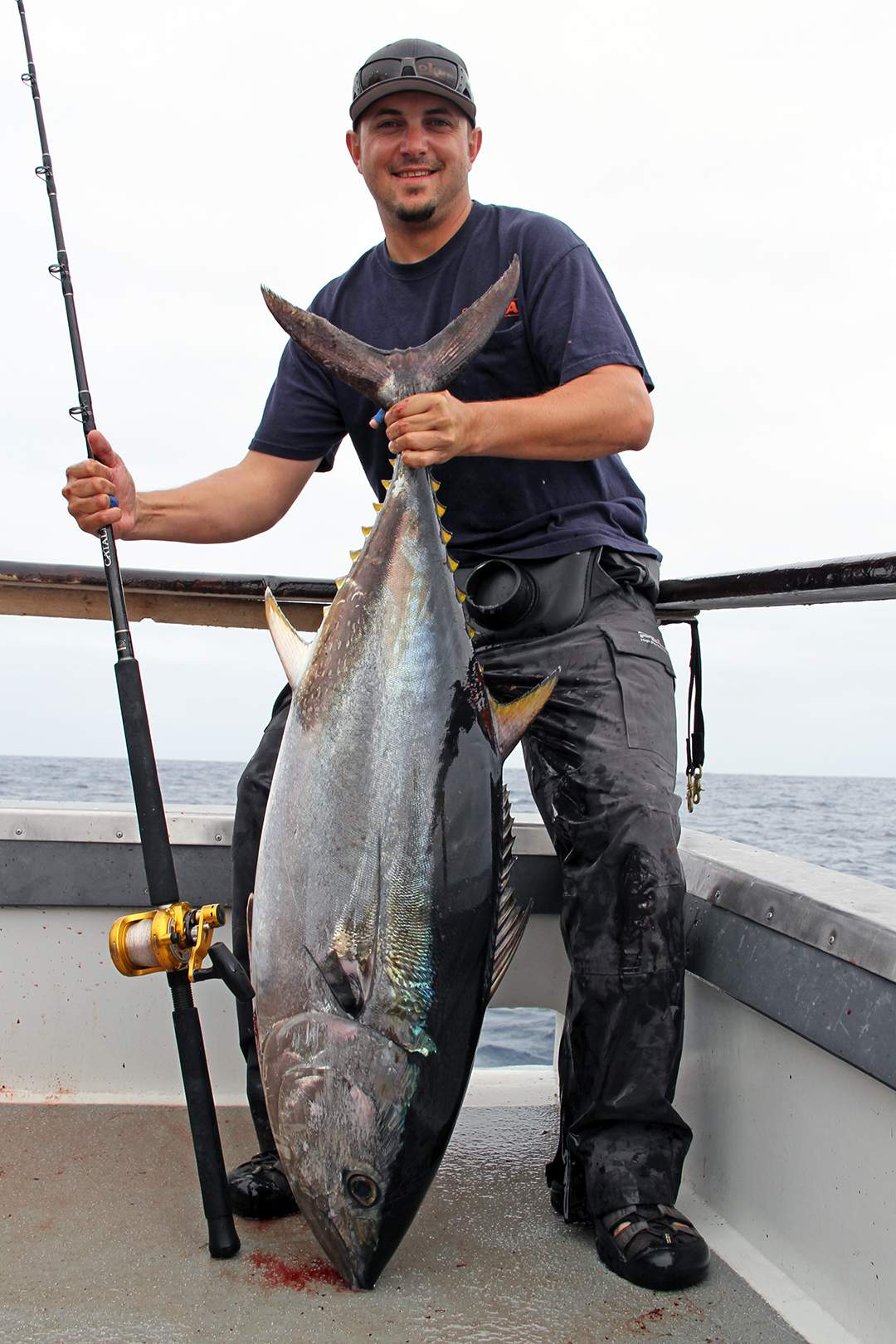