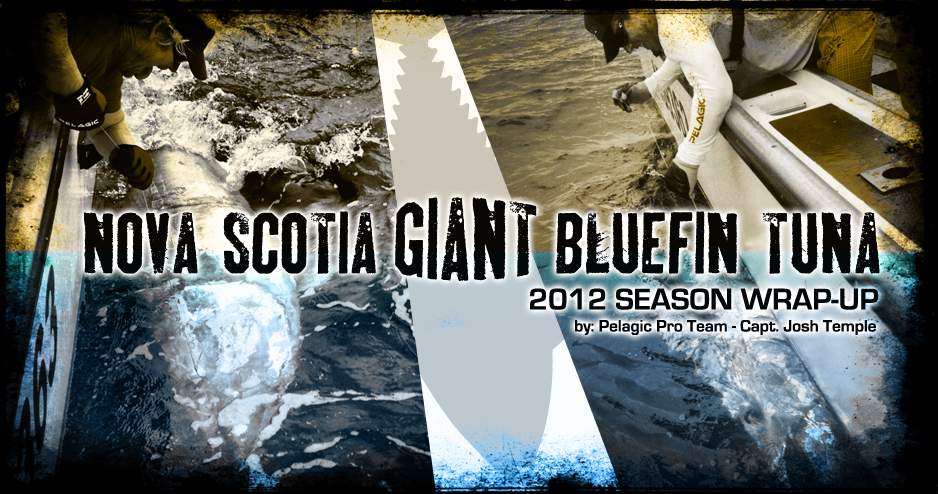 Ask any ardent saltwater angler what their top ten big game fishing destinations are, and you're likely to get a long list of places spanning the globe. Renown locations like Australia, Africa, Mexico, Panama, and Hawaii will surely grace most lists, and they certainly deserve to be there. There's one location however that I can almost guarantee won't appear on any of them. Canada. But it's probably the ONLY one that demands to be on the top of every list. 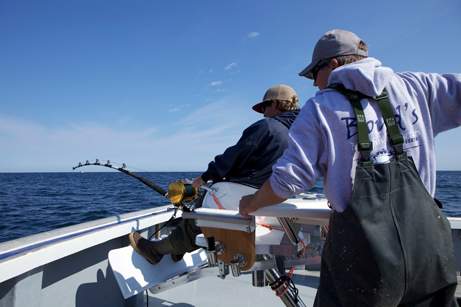 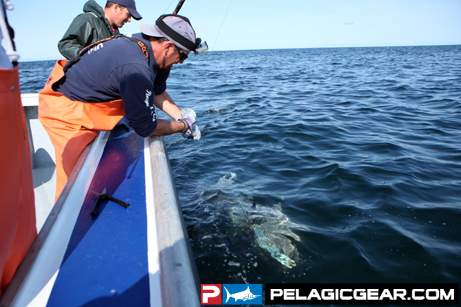 Most people would laugh out loud in your face if you mentioned Canada as your top worldwide destination for big game fish. But all you would have to do to quiet their boisterous challenge is whip out your iPhone and show them the pictures of the giant bluefin tuna of grander proportions that you caught each and every fall off the shores of western Nova Scotia. Schools of giant tuna that filled the shallow, 60 - 150' waters of the Northumberland Straight to gorge upon plentiful herring and mackerel stocks. Video of the massive tunas eating baits right out of anglers hands after they were chummed into a frenzy at the side of the boat. Audio of the reel as a grander feels the bite of the hook and tears off for the horizon at a rate of unimaginable speed against ninety pounds of drag. No sir, Canada deserves serious and credible mention as perhaps the best place in the world for anglers to catch, and release, fish of a thousand pounds or more each and every day of the season.

Below: Canadian Coast Guard and Federal Fisheries officers keep a close eye on anglers and crew to ensure safety and compliance with all rules and regulations when fishing for these massive tuna // Skylar Sheaves battles an estimated 800#er on 90#'s of maximum drag from the chair - local Nova Scotia women anglers and crew have shown unique penchant for heavy tackle fishing. 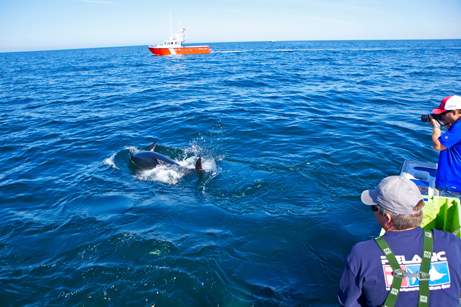 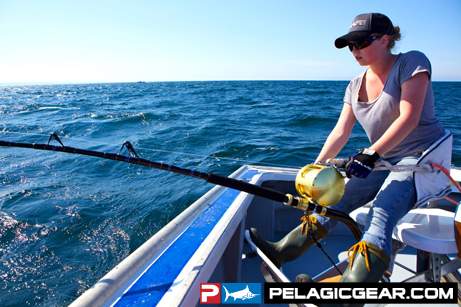 After nearly a century of dormant obscurity, Canada's back to reclaim her place at the top of a very distinguished list.

The 2012 giant tuna season in Nova Scotia can only be described in one way - UNBELIEVABLE. The sheer numbers of giant bluefin tuna that invaded the waters of the Northumberland Straight were reminiscent of the glory days of the early-1900's, when the worlds elite discovered Nova Scotia's amazing fall bluefin bite. Famous authors, actors, athletes, and adventurers flocked to eastern Canada to sample what was considered at the time as the best big game fishing in the western hemisphere, if not the world.

Below: Numbers of fish have returned to historical levels in the past few years - here, a school of giants mark below the boat on the display from the sonar // A common sight in Nova Scotia waters, as an angler goes to battle against another grander bluefin tuna. 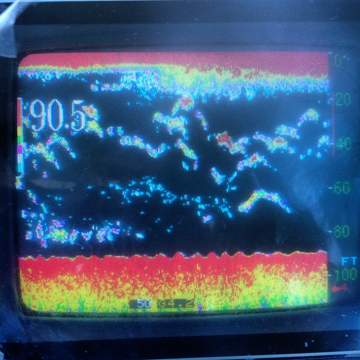 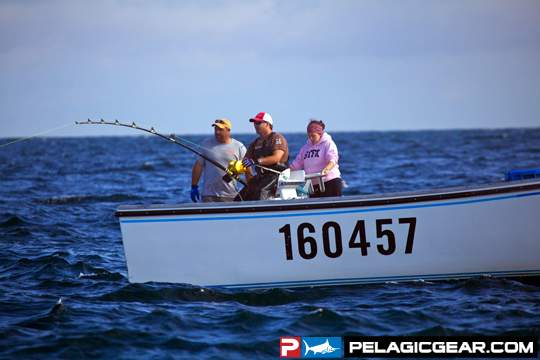 Zane Grey, Michael and Helen Lerner, Ernest Hemingway, Amelia Earhart, and countless other distinguished anglers enjoyed decades of unparalleled action every summer and fall. On primitive tackle these pioneering big game fishermen succeeded in landing remarkably huge and terribly fierce fighting fish in staggering numbers. Imagine the sight of these angling legends hooked-up from simple plank and frame boats as schools of giant bluefin tuna crashed the surface for miles in every direction. It must have been something to behold.

Below: Michael Lerner, founding father of the IGFA, poses with 5 Giant Bluefin Tuna caught in Nova Scotia // 1924 Zane Grey and his world-record Bluefin Tuna taken in the waters off of Nova Scotia. 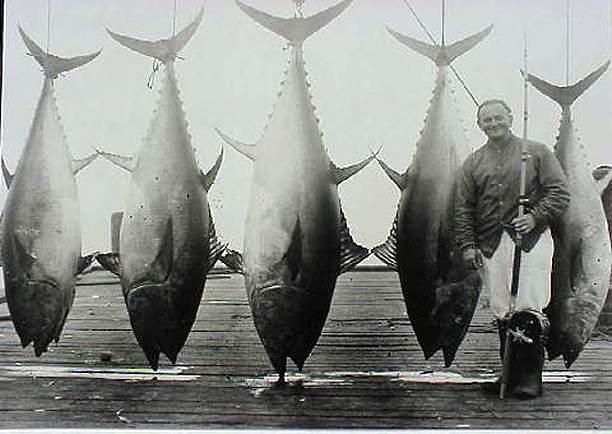 Canada remained at the very top of most saltwater fishing anglers lists as THE place to travel to for guaranteed success day in, and day out. However, after nearly fifty years of great fishing, it was all about to change.

Thanks to several factors, including poor ocean survival, commercial fishing pressure, and adverse environmental effects amongst others, the giant bluefin tuna that once swarmed the waters of Nova Scotia suddenly failed to return. The consensus was that the crash in local baitfish populations were the greatest mitigating factor in the decline of bluefin stocks, but the fact is we will truly never know. Fisheries science was in it's infancy, a far cry from where it is today, and too many questions remain as to exactly why the massive schools of giant bluefin all but vanished.

Below: Skylar Sheaves preps her 800# giant bluefin for release // Although, Nova Scotia enforces a strict catch-and-release fishery for giant bluefin, certain charter captains are allowed a small commercial quota where lucky anglers can take part in a "harvest" day - here, a lucky angler from southern California stands in for a quick pic with his 901# giant bluefin. 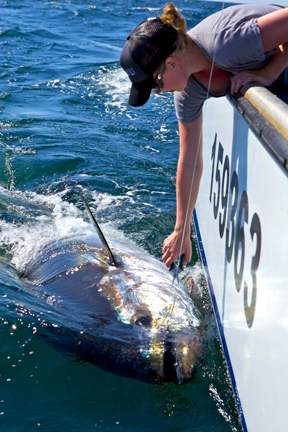 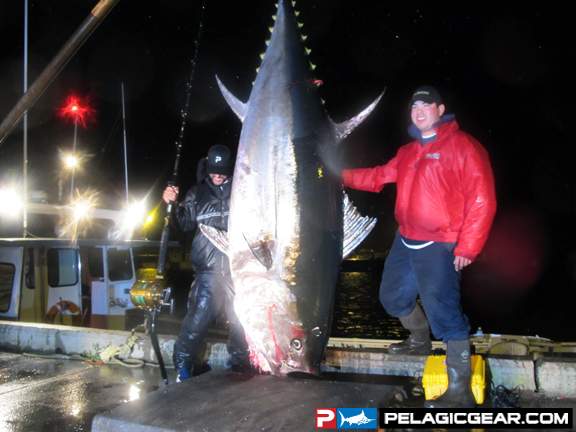 Tourists and locals hoped that it was an off year, but when one year stretched into ten hope was all but lost that the waters of Nova Scotia would ever teem with tuna again. After three decades the stories of the fish and the people who endeavoured to catch them faded from memory. The big game world for the most part eventually forgot all about Canada.

Below: Ron Kawaja brances himself as another volkswagen-sized bluefin makes a blazing run // Graham Weiss all-smiles after successfully reeling in this 1,100# giant. 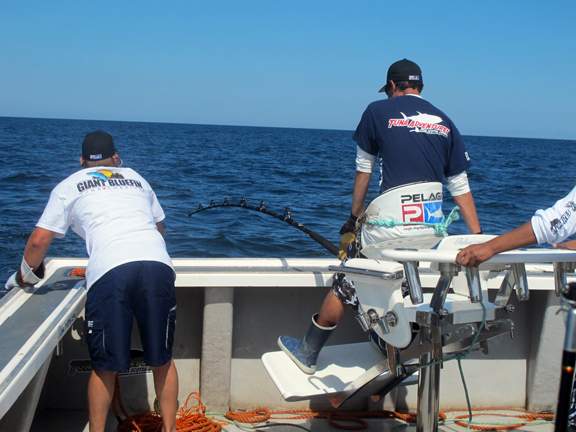 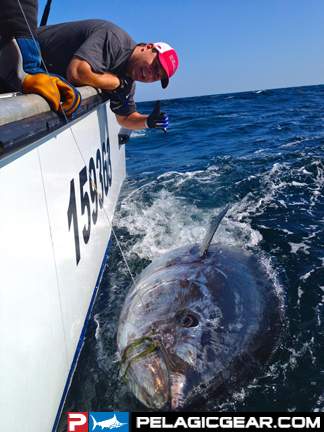 Fast forward a generation, or two, to this season. The late-summer and fall of 2012, where I report to you LIVE from the giant bluefin tuna grounds off of western Nova Scotia. My hands are raw, my back requires surgery, and no I wasn't run over by a truck, though it sure feels like it. I've spent the last month and a half doing day to day battle with hordes of giant bluefin tuna on heavy tackle, and heavy drag. For the entire month of September we enjoyed a 100% success rate and caught and released giant bluefin between 600 and 1,100 pounds each and every day. My friends, that's all the reason I need to rocket Canada right back up to the top all of my lists.

Below: "Big Al" Gross, owner of the San Diego-based long range sportfisher EXCEL , with his estimated 900# Giant Bluefin Tuna caught with Prime Time Adventures // Another giant harvested as a part of the small commercial quota - certain captains are allowed this commercial quota, which is one per year. 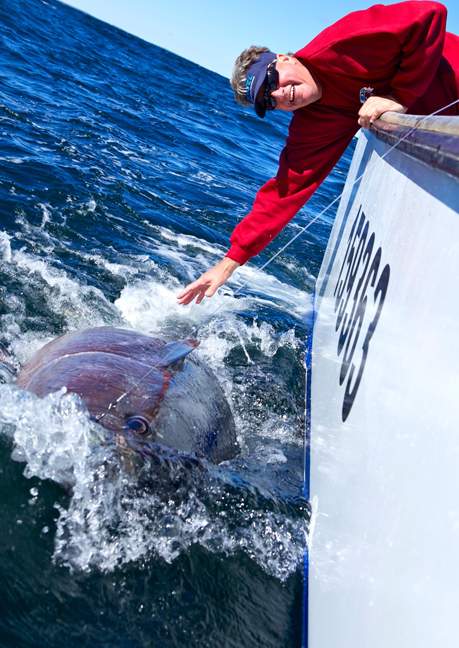 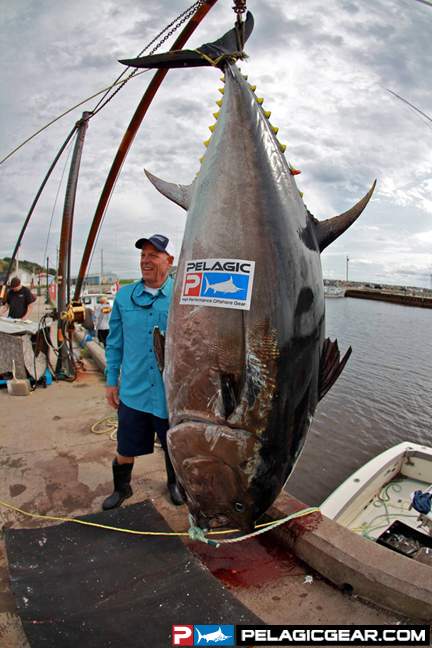 After my second consecutive season I can safely report that Nova Scotia, Canada is once again home to vast schools of giants. Anglers and crews were treated to what can only be described as phenomenal action during the 2012 season, and we're still going! As of today, October 9th, 2012, they are still out there, and still biting. A scientific tagging boat working in conjunction with Stanford University and the Canadian Federal Government counted five successful releases today alone. Thanks to a new viable mentality focused on conservation, these fish were all released with satellite archival tags designed to help all of us learn a great deal more about these magnificent fish. Sport fishing regulations subsequently lean toward conservation as well, and anglers are required to use barbless circle hooks and release all fish. Recent fisheries studies have proven that nearly all fish released will survive and return to the waters of Nova Scotia year after year. Remarkably, one fish was tagged in 2011 and recaptured this year, on the very same day and in the exact location that it was tagged and released at last year. Science and conservation certainly work.

Below: Pelagic Pro Team Captain Woody Woods made the journey from Venice, LA to fish with Capt. Josh Temple and the Pelagic crew for a week during the 2012 season - here, Woody wires his first giant // Team Pelagic's, Mike Curtius, up close and personal with one of many giants caught during his week long trip. 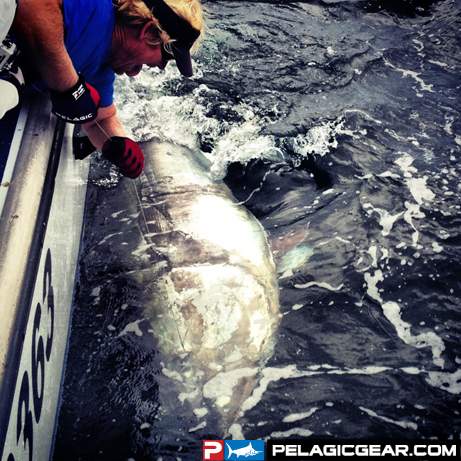 As we sail towards the end of the 2012 giant bluefin tuna season here in Nova Scotia, I take great comfort in the fact that at this very moment there are countless giants swimming not far from shore. If these past few seasons have been any indication, the ghosts that once haunted these waters have been resurrected, and Canada has reclaimed it's place in the hallows of big game fishing once more.