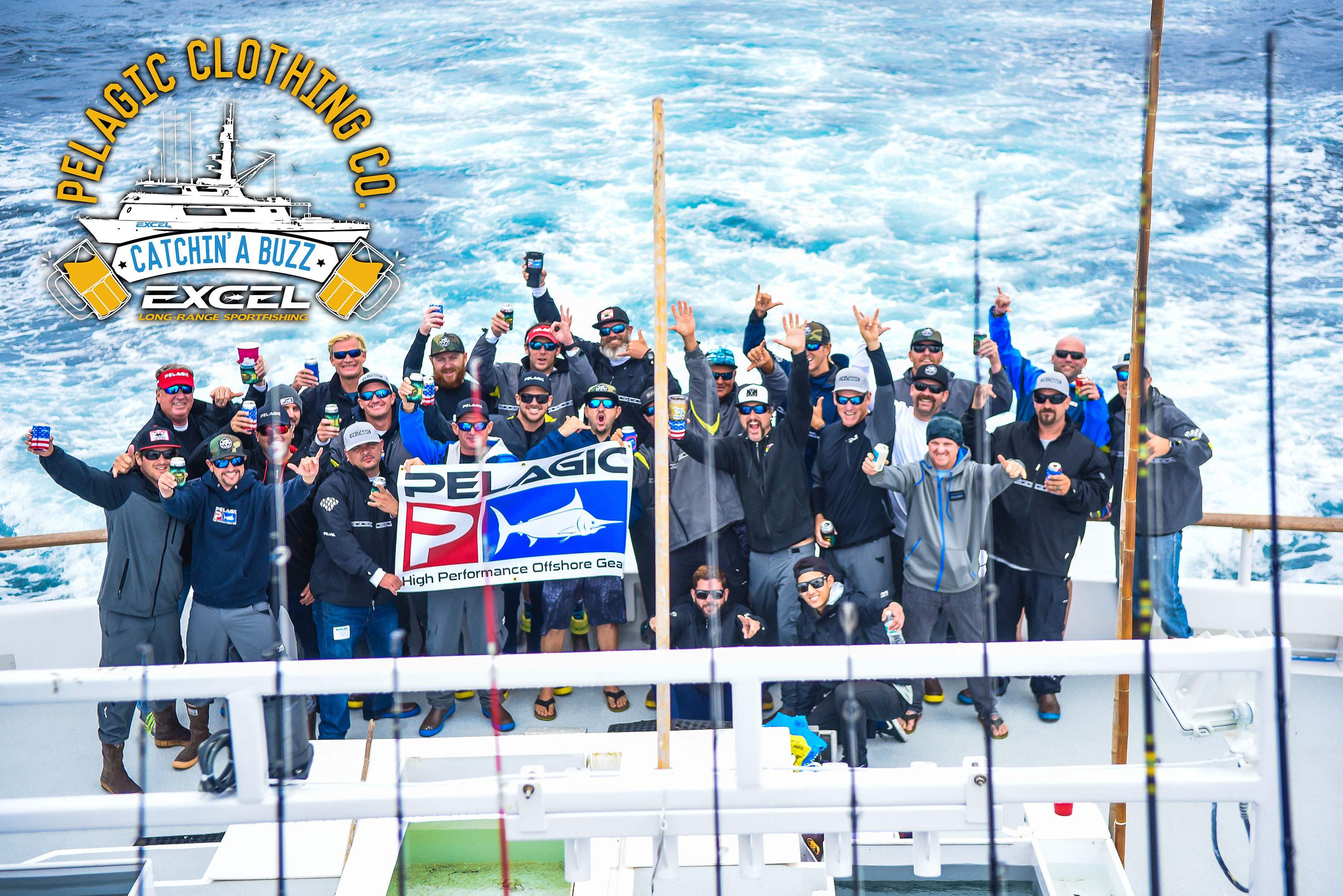 May 12, 2017 - San Diego, CA - The moment you see the boat you instantly feel a rush of anticipation and excitement, and you soon realize you’ll be fishing on one of the largest, and best equipped long-range sportfishers found anywhere. The EXCEL is a beautiful 124’ sport fishing vessel equipped with the latest in state-of-the-art navigation and fishfinding electronics, a wide 32’ beam with more than enough deck space, amenities that are unsurpassed, and some of the best fresh cooked meals you’ll ever eat.

The 124' EXCEL is the premier boat in the San Diego fleet. 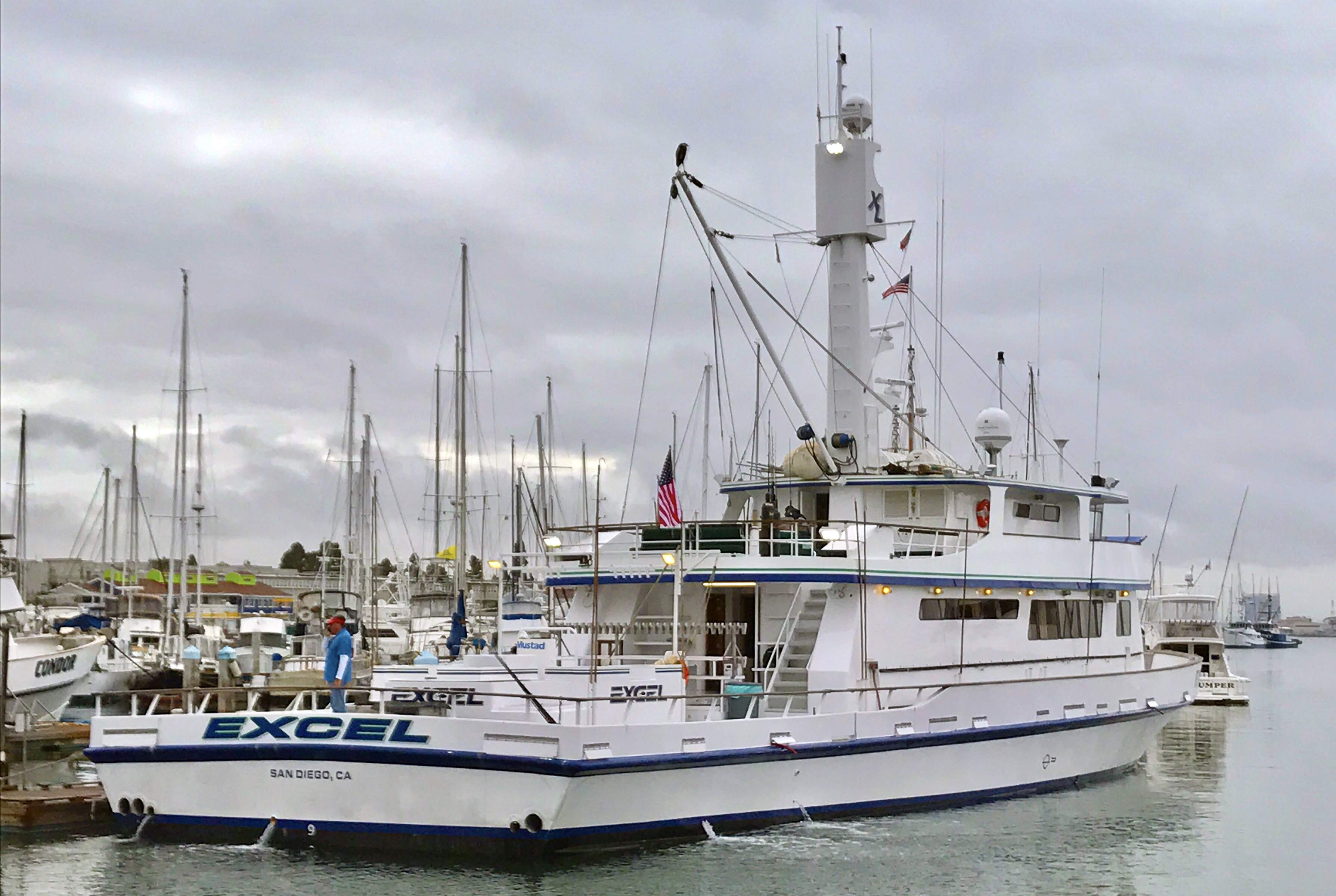 With its 32' beam and extra large deck space, anglers have plenty of room to fish in comfort. 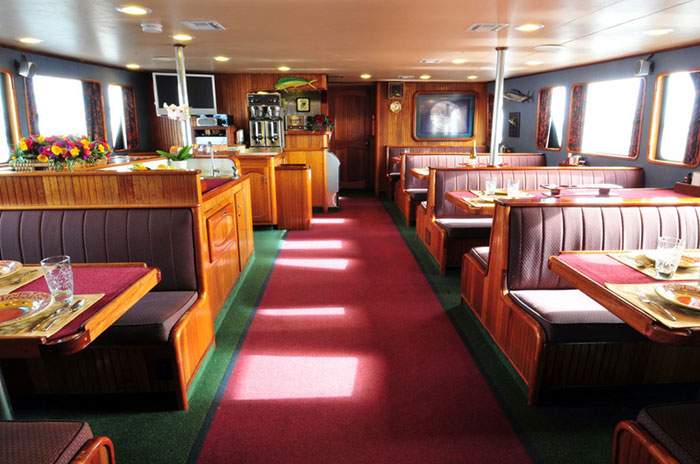 Among the top-of-the-line features, the spacious and well-stocked galley keeps anglers fueled and comfortable the entire trip.

PELAGIC and the EXCEL have been partners for many years now, and it was only natural when we were having our National Sales Meetings in Southern California, we topped off the week with the 1st Annual PELAGIC “Catchin’ A Buzz” Sales Expedition aboard the world-famous EXCEL . Not only was the trip an opportunity to bring the Pelagic Family together, it was also the perfect mission to put some of the new PELAGIC performance shirts, jackets, and boardshorts to the test.

After boarding the boat and getting the fishing forecast and safety talks out of the way, the group got to setting up all the tackle, getting the jackpot nailed down and crackin’ a few cold beverages. We’d be running about 40 miles or so into Mexican waters to get to the most recent productive grounds. The weather had been overcast with some light rain that morning but was projected to back off as the day went on. 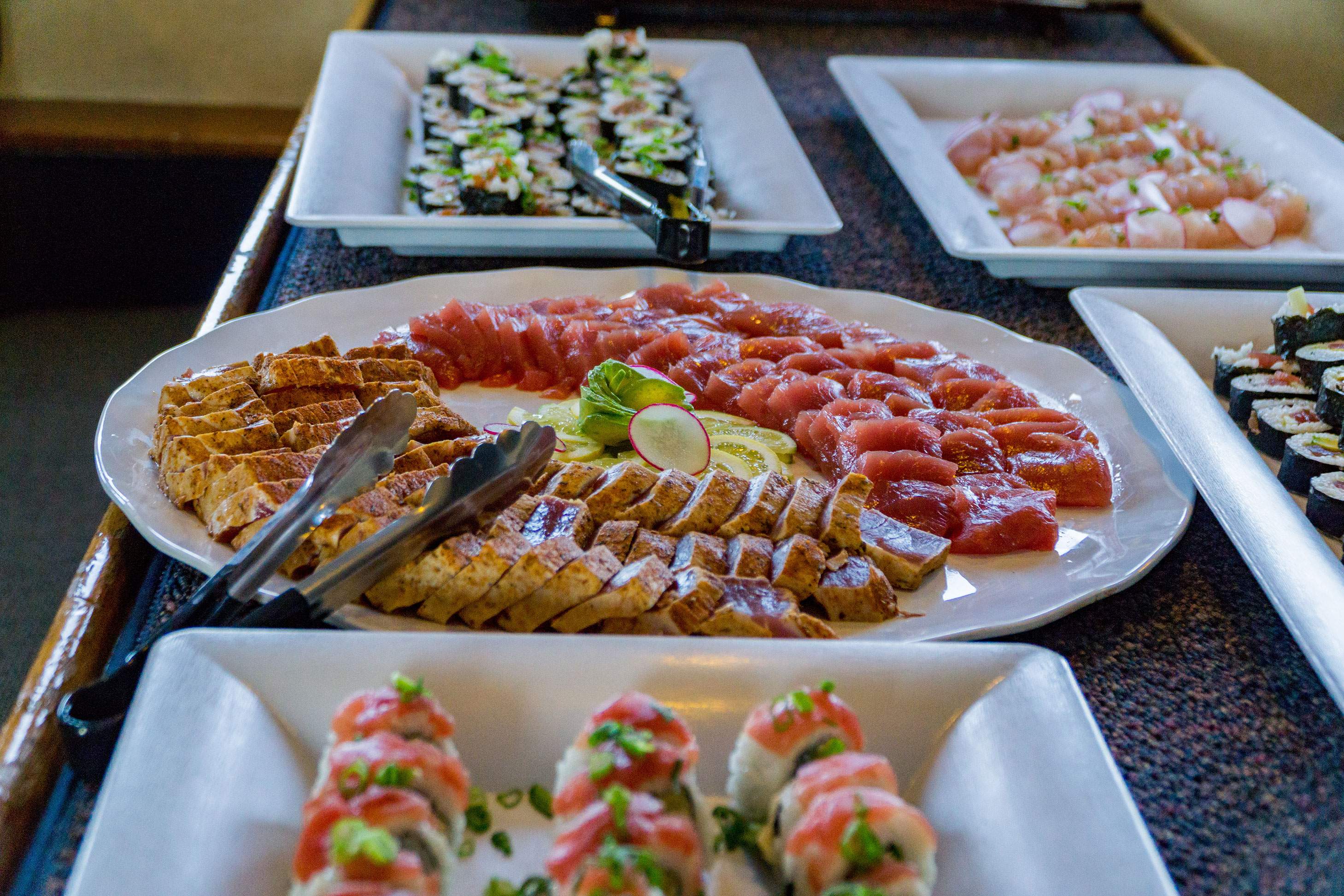 Above/Below - Among the five star meals and snacks, huge sushi and poke platters are always a big hit. 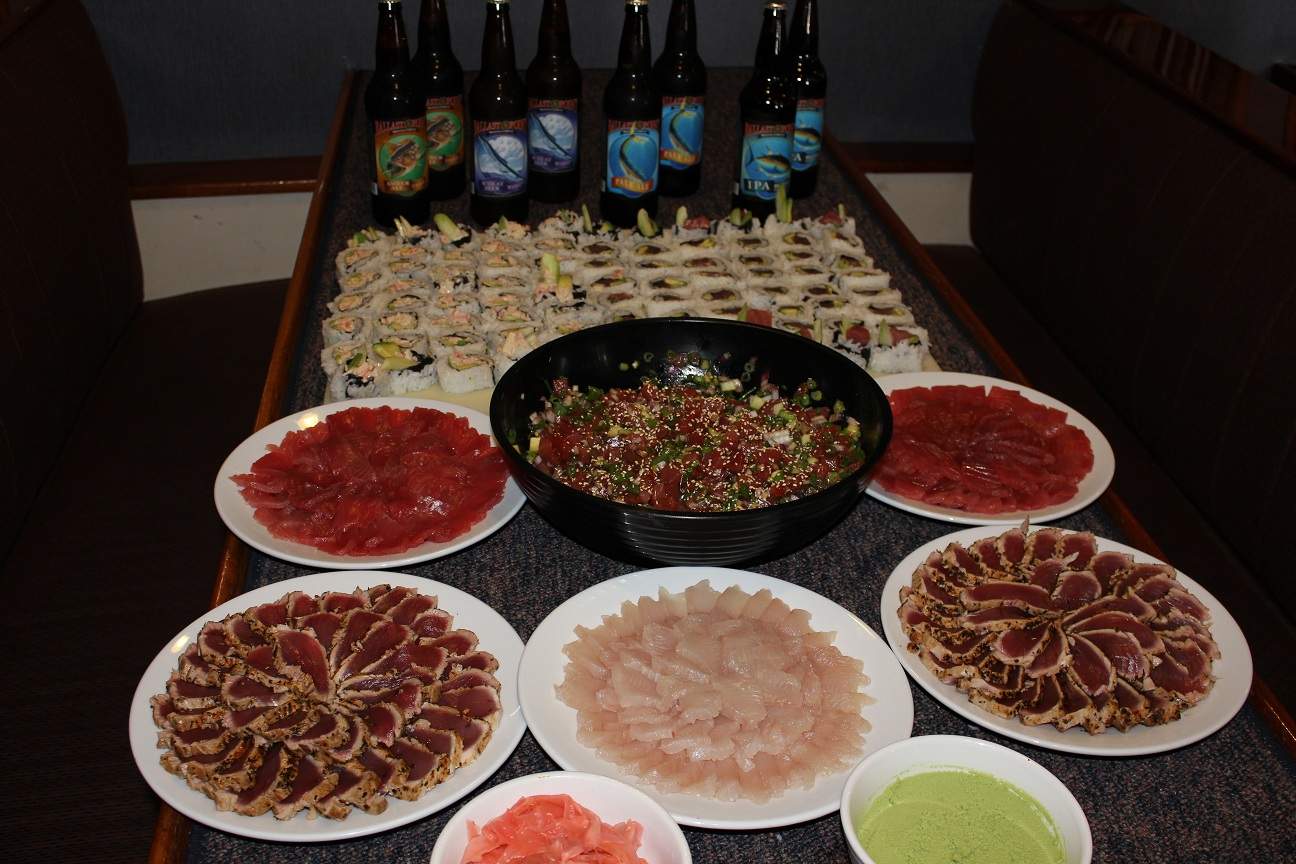 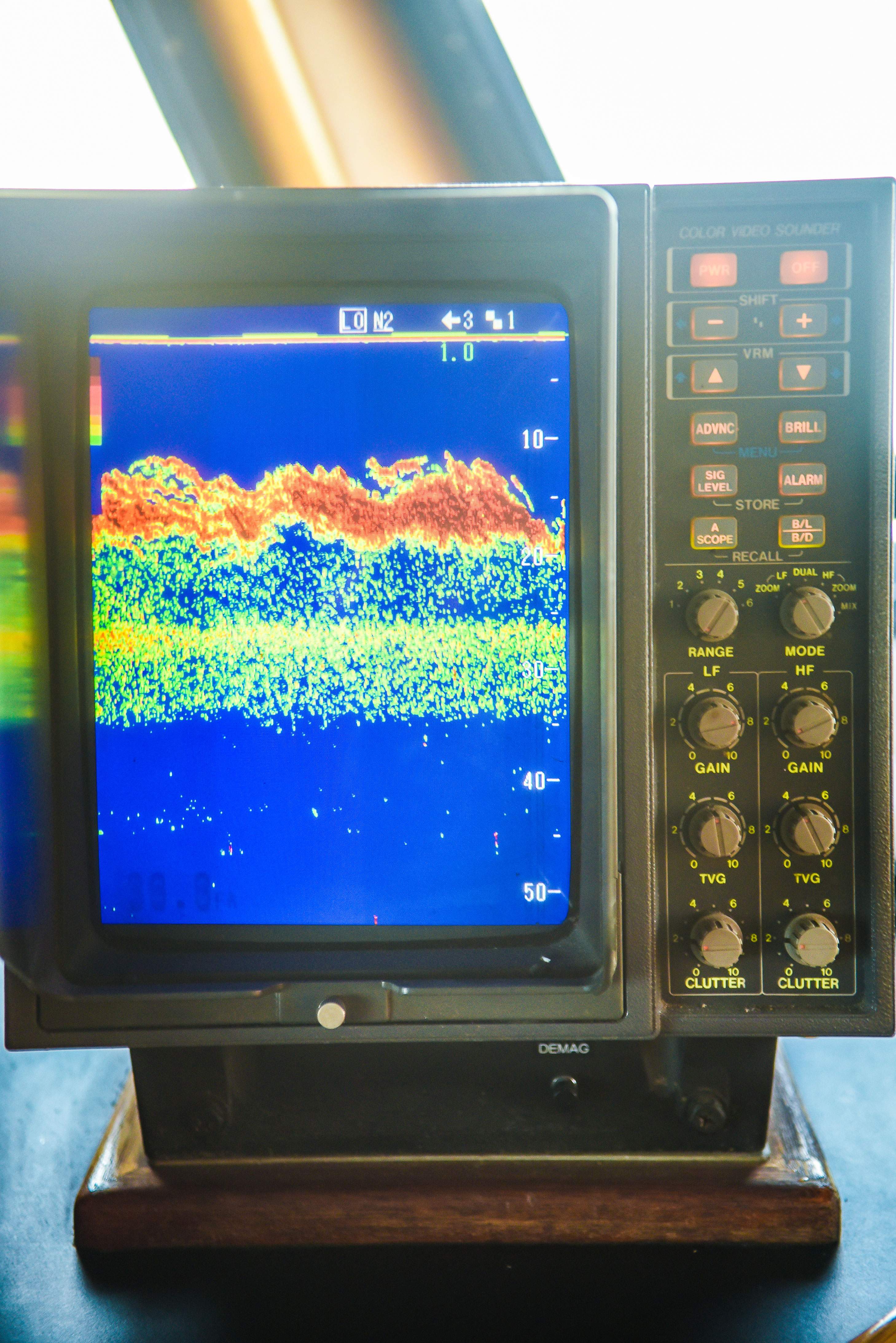 After sliding up on breezers of bluefin, the meters lit up with good spots of fish.

As forecast, the weather steadily got better and as we got in the zone, the fish where there. Capt. Justin Fleck slid in on breezers of bluefin tuna and we began to pick away. 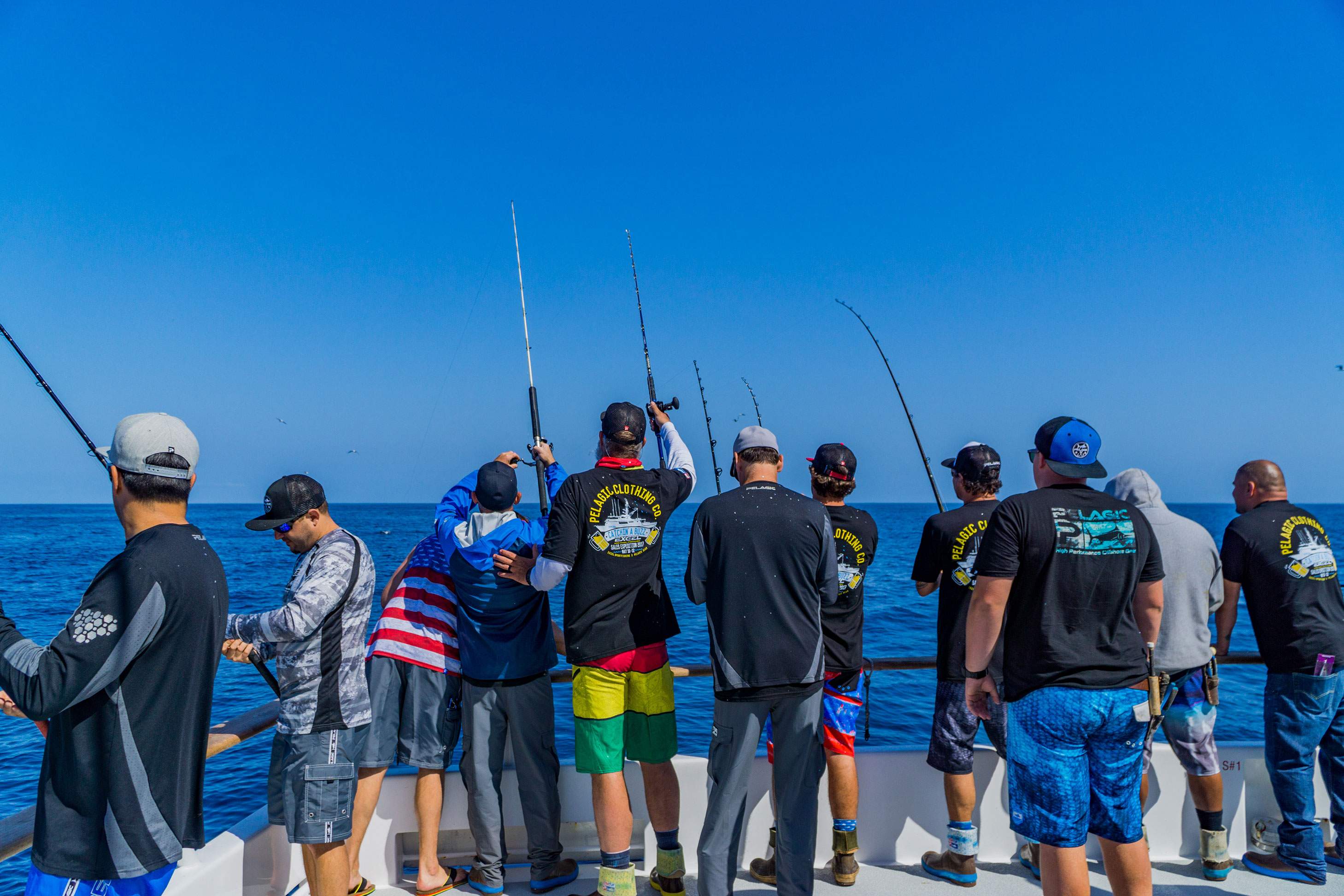 A few fast and furious stops had everyone at the rail eager to get in on the action. 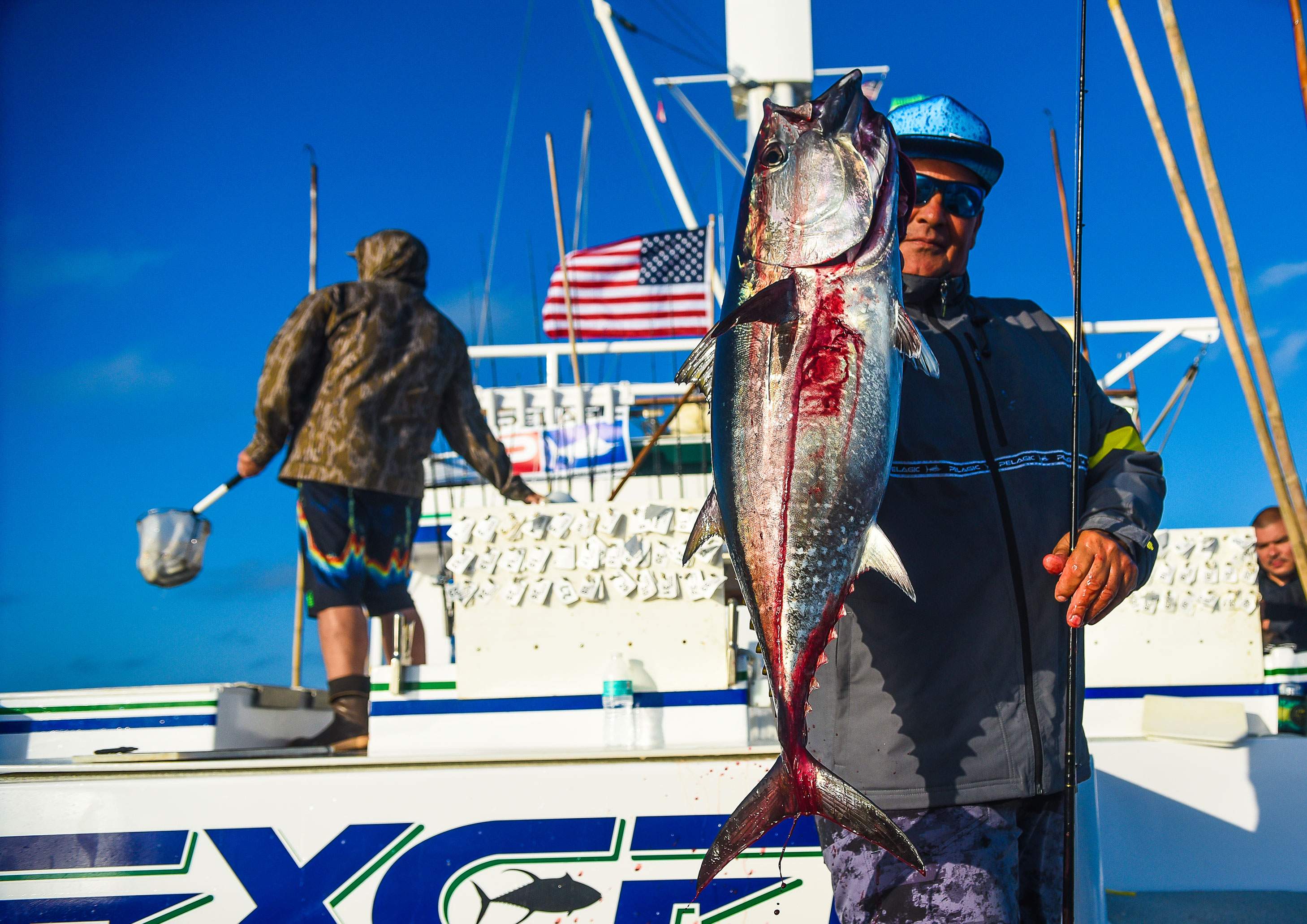 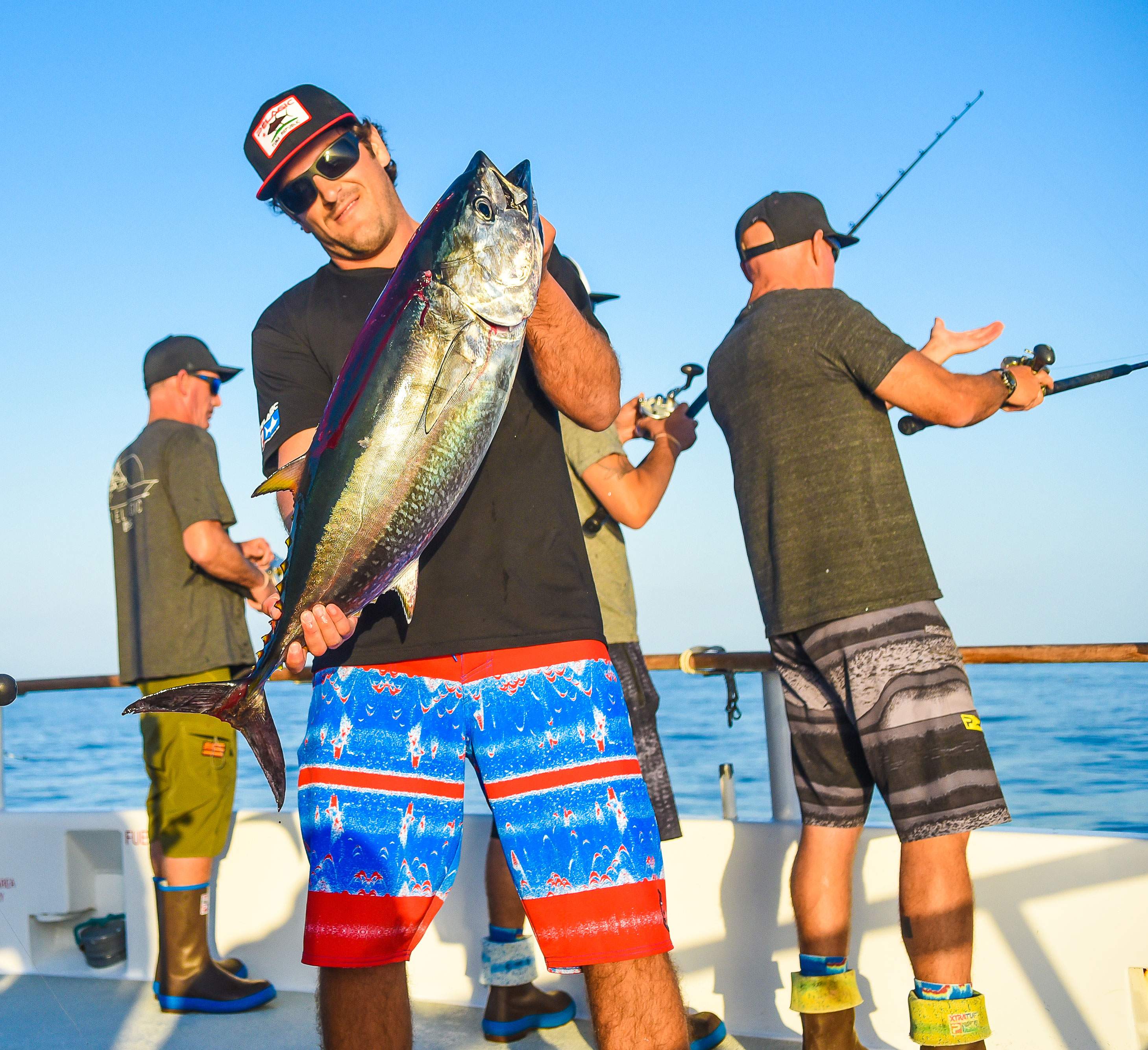 Colin Sarfeh with the first fish on the boat - a 20-lb. class bluefin that took light line and a small hook to entice.

The great weather, laughs and good times continued throughout the day as the PELAGIC Team were able to entice a school of 20-lb.-class bluefin tuna. Light line, a small hook and the liveliest bait you could find was needed to have shot at getting a bite. 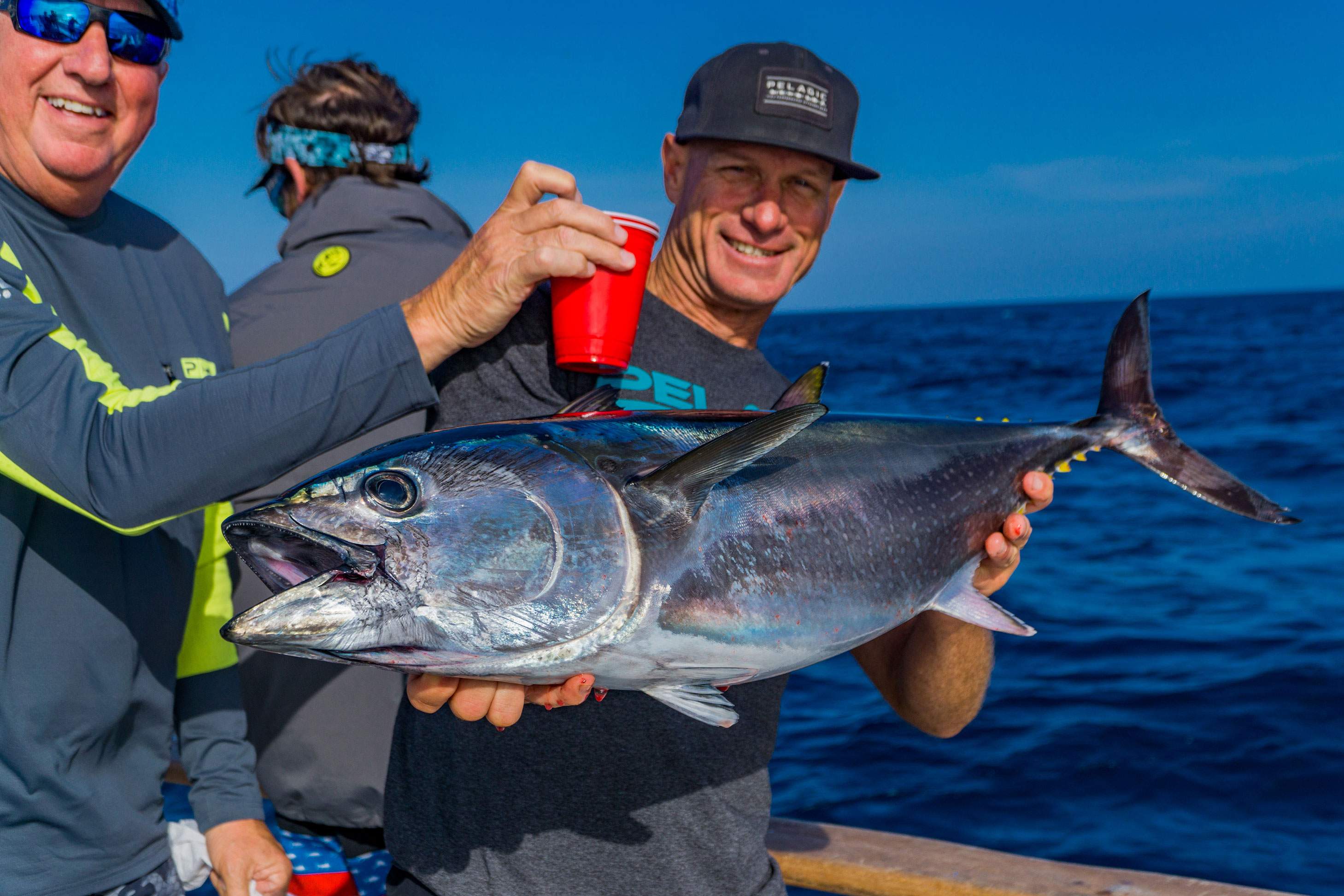 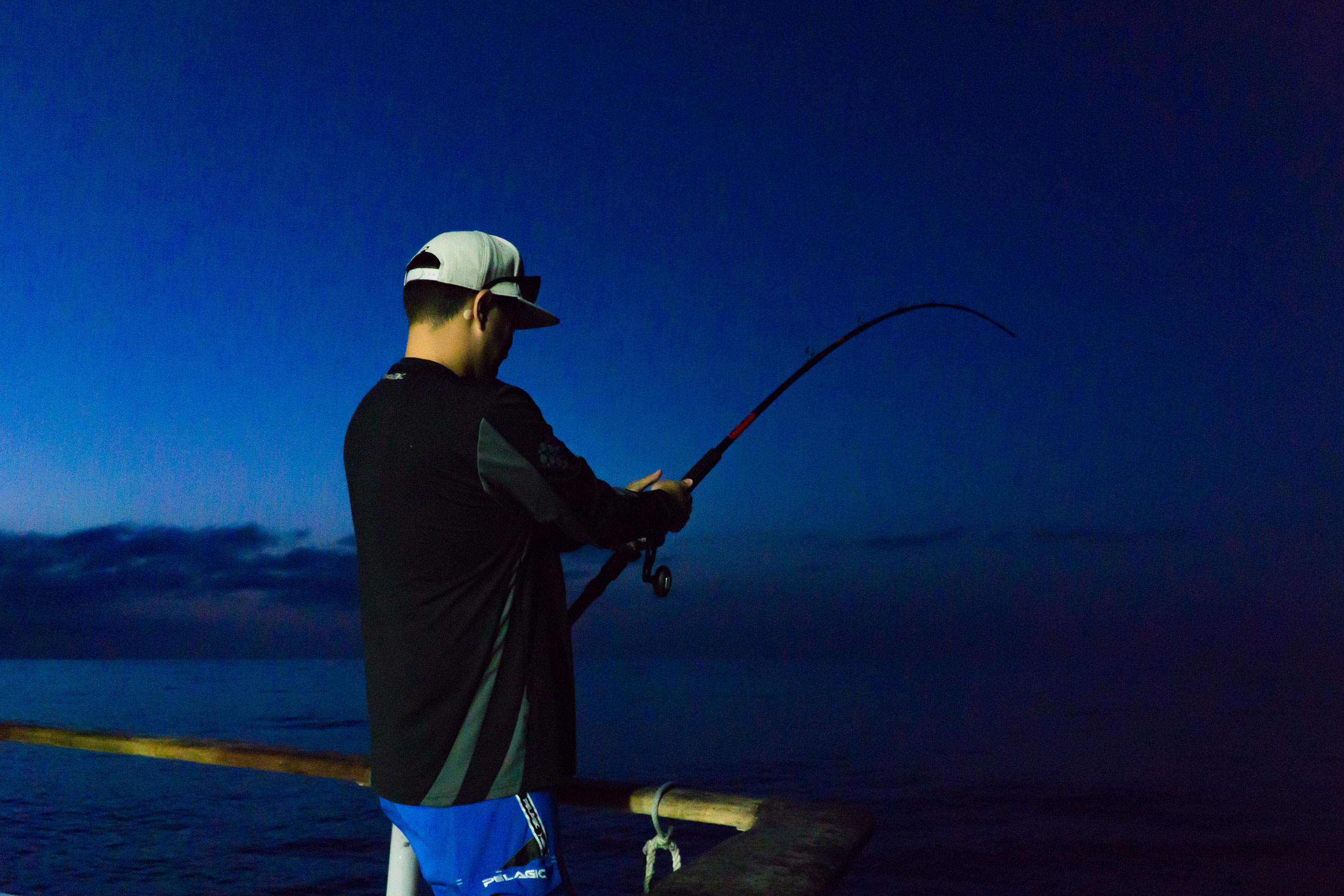 Derek Ngayan drops a heavy jig and hooks a big fish right as light is fading.

No more fish were caught until right at dusk, when Derek Ngayan hooked into a monster on a heavy flatfall jig. The fight was on and he soon had a gallery of onlookers as the rest of the group watched, coached and cheered throughout the entire 2 hr and 45 min fight. 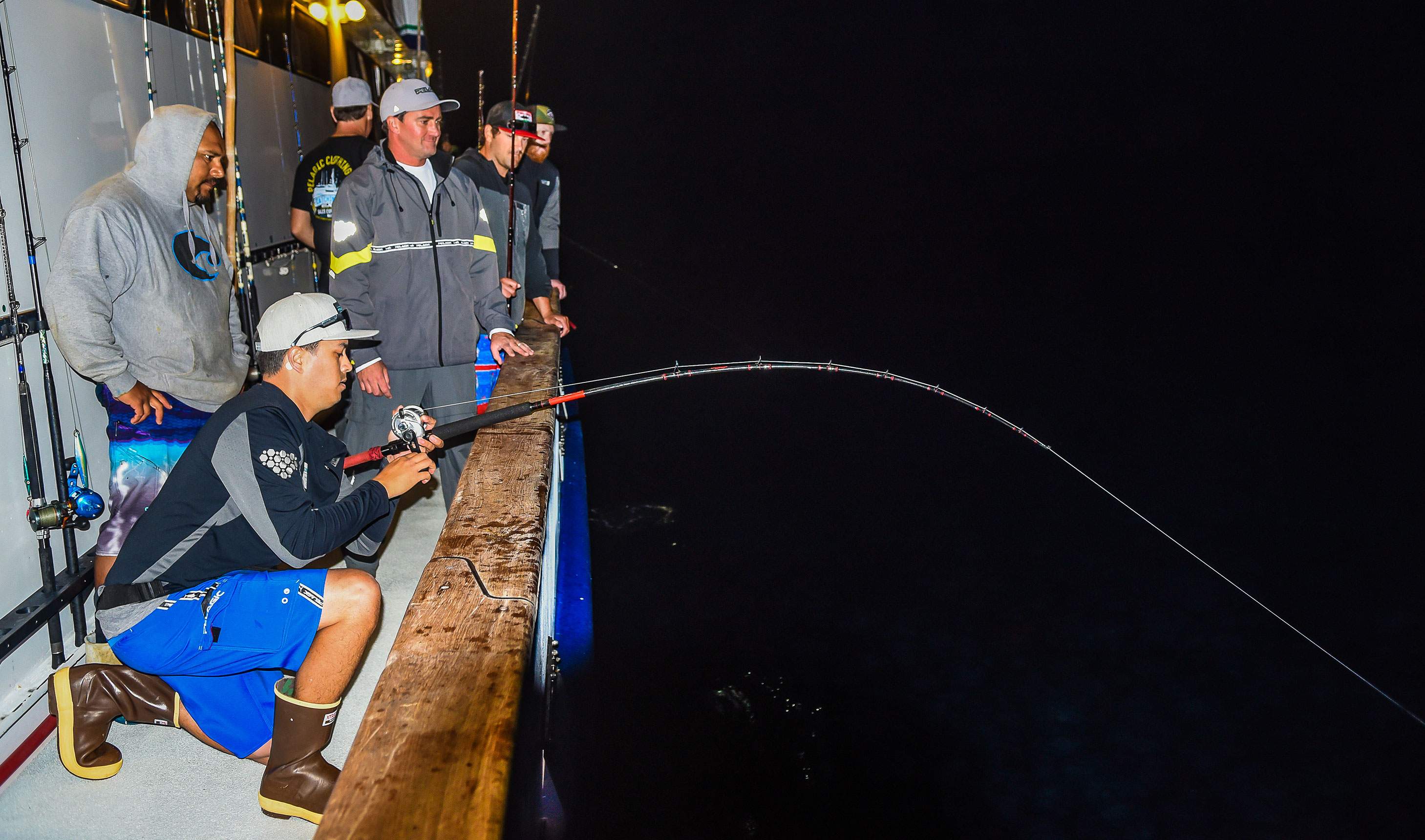 The big bluefin put the Okuma reel/Seeker rod combo to the ultimate test for almost 3 hours. 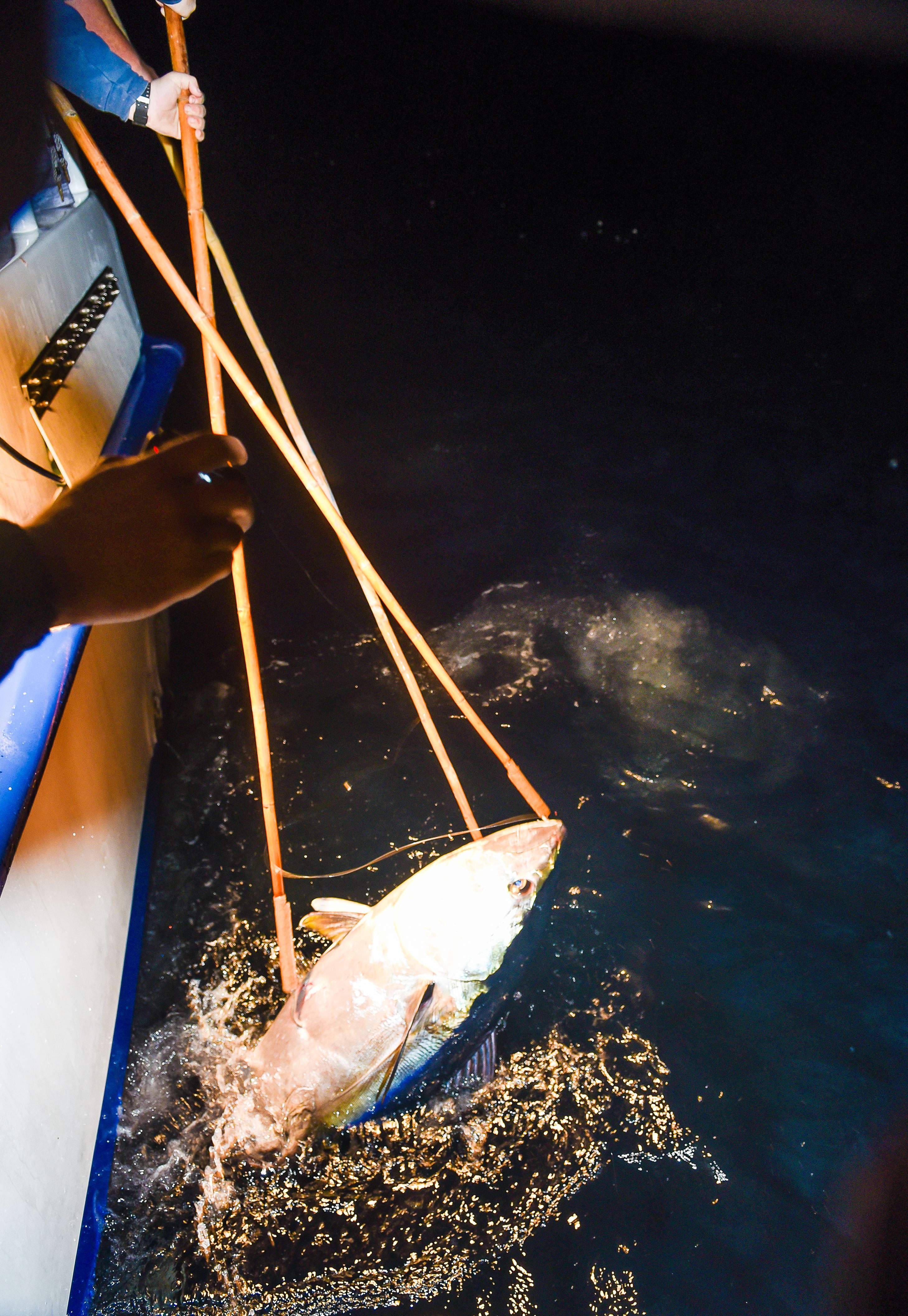 The EXCEL crew sinks 3 gaffs into the big bluefin and prepares to hoist the fish aboard. 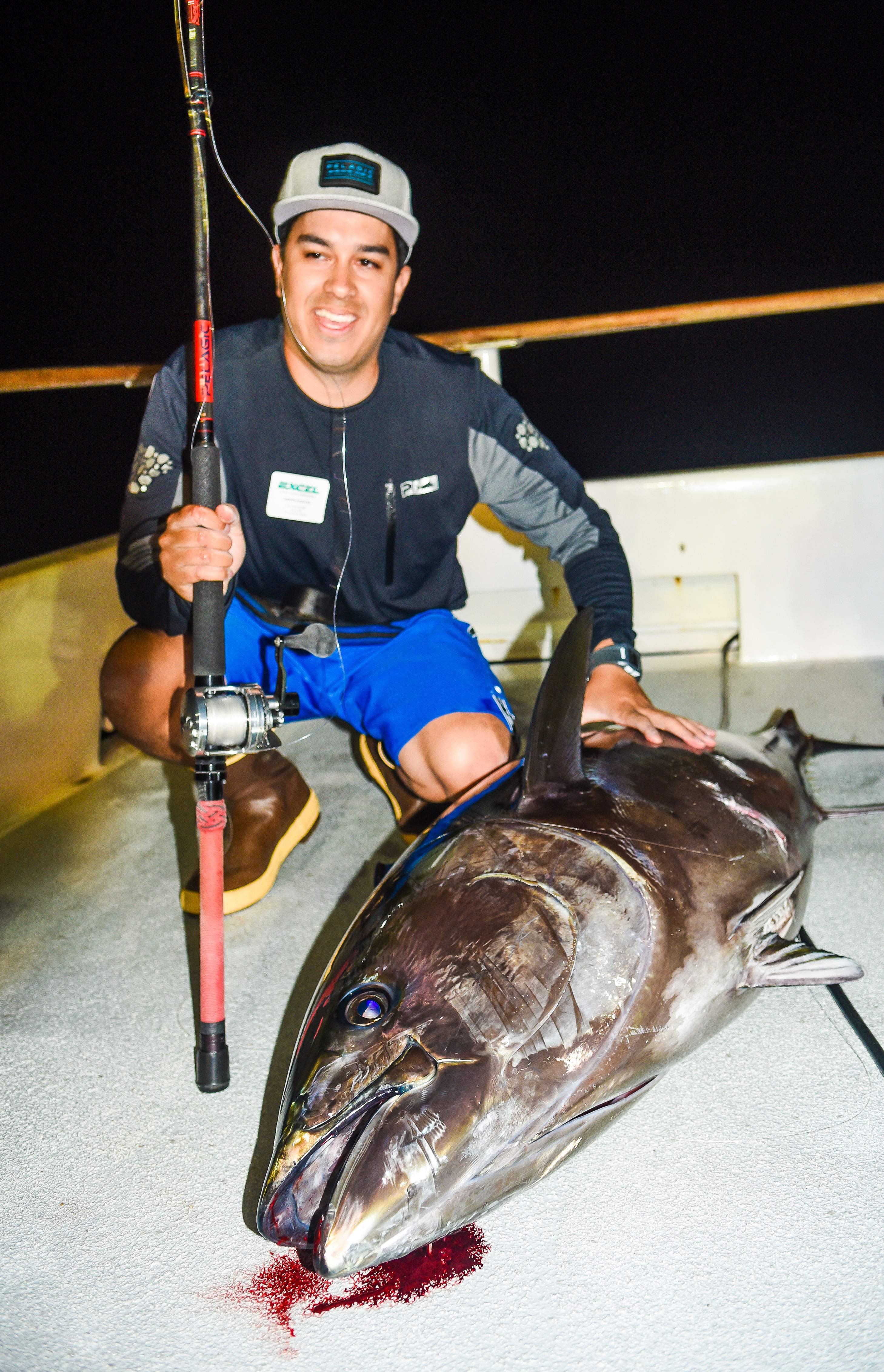 A victorious smile next to the prize

The big fish took Derek around the boat multiple times and every time we thought the fish was done, it would take off and make another long run. In the end, the fish gave into to exhaustion before Derek did and the EXCEL crew sunk the gaffs into the big bluefin and cheers erupted as the fish was pulled over the rail. Countless pictures were taken and high fives were handed out as everyone celebrated the 195-lb. bluefin tuna! 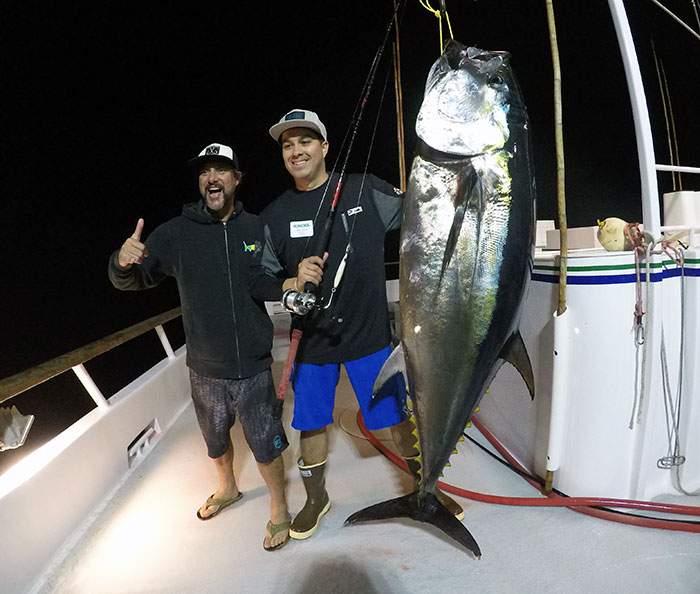 After drifting in the area overnight, we began a slow “plunker” bite on smaller 20-25-lb. class bluefin. Light line and small hooks were the name of the game just to get a bite, and we managed to boat a handful of fish before we took off in search of more fish.

By that evening, the wind and weather had started to kick up as we headed for the barn. With the sun setting behind Coronado Island, and delicious plates of prime rib coming out of the galley it was clear the 1st Annual PELAGIC “Catchin’ A Buzz” Sales Expedition was a roaring success. The fishing, food, drinks, laughs and shenanigans throughout made for an exceptionally great trip – along with Derek’s near 200-lb. beast of a bluefin. 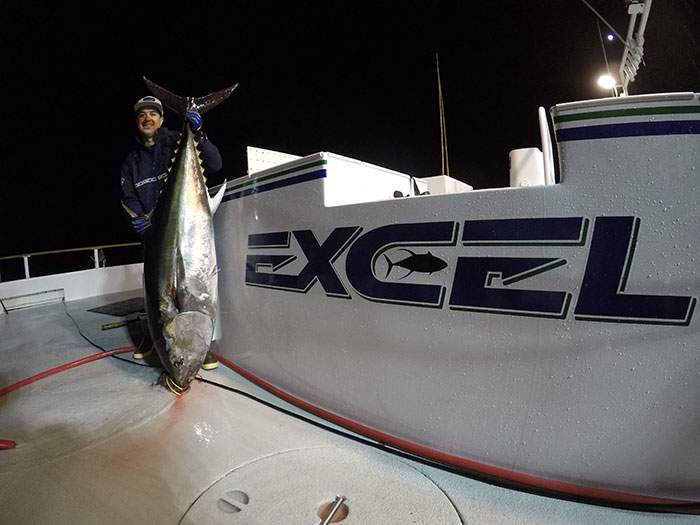 Another celebratory shot of Derek and his fish of a lifetime.

Check out more pics from the trip in the photo gallery below.

For more information and open trips aboard the EXCEL, check out the website HERE .