An Expanded View into the World of Daytime Swordfishing 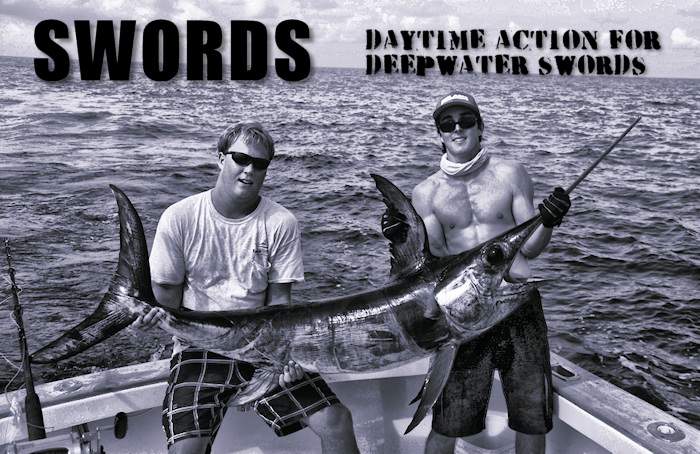 The Florida Keys are known for some of the most tropical waters that run anywhere into the United States coastline. Currents sweep around and bring rich waters and countless fish into the Gulf of Mexico from the Atlantic Ocean and Carribean Sea. The variety of fish around these islands in simply amazing. These were the waters that Ernest Hemmingway often called home which helped induce the full on creativity for the story 'The Old Man and the Sea'. These generally warm waters teaming with life are a sportsmans paradise, and highly regarded by anglers from around the globe.

Below: Islamorda found in the Florida Keys is in a prime location for mayhem and adventure! 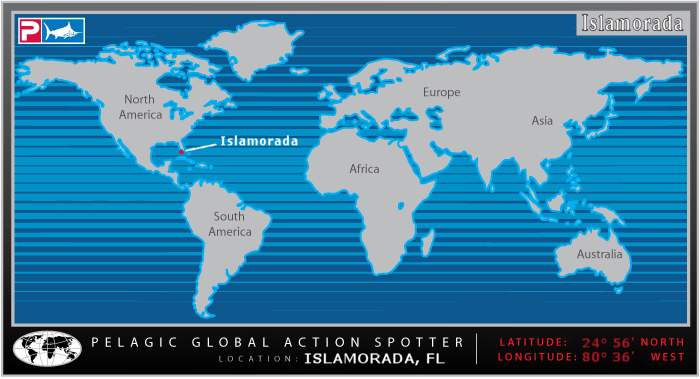 Islamorada is a very unique area. Just about any species that is present in waters between the equator and the north Atlantic can be or have been caught in close proximity to the Florida Keys. Anglers have a wide open choice and what they want to target. These waters are well known for blazing fast King Mackerel, super healthy populations of Sailfish, countless species of reef fish, Dorado, toothy Cuda's, and at times Tuna and other Billfish. Some of the largest sharks, including Great Hammerheads, call these waters home as they prey on giant silver-king Tarpon.

For Capt. Nick Stanczyk and crew of the B n' M out of Bud n' Mary's Marina , there is always an adventure to be had. Recently, they have perfected the art of daytime Swordfishing... a practice that isn't often utilized due to great variety of other offshore species. However, the boys have had some great success and continue to show us proof of monsters from the deep!

In normal procedure, Swordfish are targetted at night, which often come up to feed on squid and various baitfish. It is a common practice around many locations of the world, even Florida, to night-time fish for these Broadbill with Squid, usually with the aid of underwater lights. The practice has been altered and customized countless times over to fit the preferences of captains themselves. Up until recent the thought of targetting broadbill in the day was thought to be ludicrous. With nearly everything, it was only a matter of time until being perfected. Over the past 10 years day-time swordfishing has been growing more and more popular amongst anglers.

Recreational fishing has developed a sub-specialty called swordfishing . It has become quite popular throughout many parts of the world. Because there is a ban on longlining along many parts of seashore, swordfish populations are showing signs of recovery from the overfishing caused by Longlining along the coast. The population recovery is far from complete and the swordfish population is still at a much lower level than it once was.

Below: Nick poses with a beautiful Broadbill that was landed in the midst of the day... 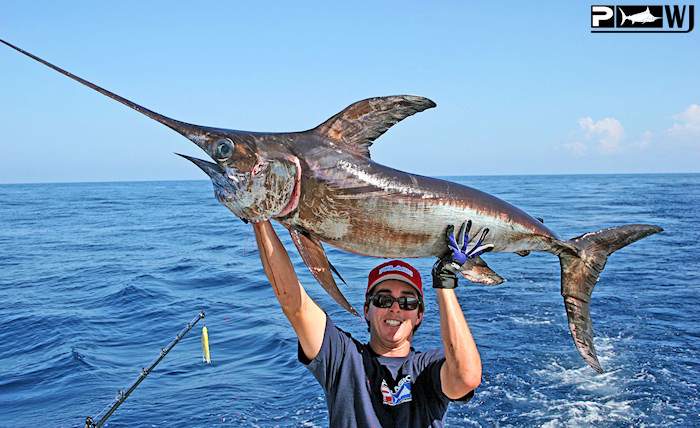 Swordfish like most pelagics are fast growing fish, reaching sexual maturity at about 2 to 3 years of age, and live for at least nine years. While they may survive longer, no such documentation exists. The majority of swordfish caught in the North Atlantic sport fishery are thought to be 4 to 5 years old. It is reported that in the North Atlantic, the swordfish stock is fully rebuilt, with biomass estimates currently 5% above the target level. This has helped given way for anglers to pursue these beautiful and powerful billfish without too much worry of population decline. Capt. Nick was involve with the discovery of daytime swordfishing off the shores of Islamorada and this is actually one of his charter specialties! Nick and crew have been long in the pursuit of the daytime sword and have efficiently developed productive methods for targetting these elusive fish.

The crew will take a Sword for harvest, but often practice and encourage catch and release of as many billfish as possible. Longline commercial fishermen take by far an expotential amount more of Swords than recreational fishermen. Despite commercial companies harvesting the fish for worldwide sale, they have in recent years been limited to certain areas and quotas to help maintain a healthy stock and prevent over-fishing in the future.

Below: Another quality Sword this time making its way in the boat... 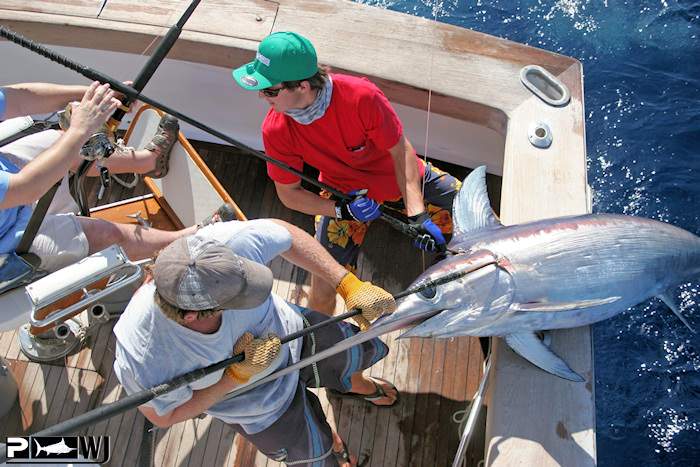 Fishing for Swords in the daytime have similarities and differences then the traditional night-time method. Perhaps one of the most important rules regardless of time, is bait presentation. Whether squid, belly strip, or live bait... presentation is key to enticing a hungry Sword. The Broadbill is often mistaken for other billfish (like marlin), but upon examination their physiology is quite different. Swordfish have larger, more advanced eyes creating exceptional eyesight. Their vision is the best of all billfish and perhaps out of all pelagics. They can dectect bait in the deep by bioluminesence from yards away. If a bait looks too generic or unappealing, they will avoid it. However, if finely rigged to perfection... a bait can prove rather enticing to a hunting sword. 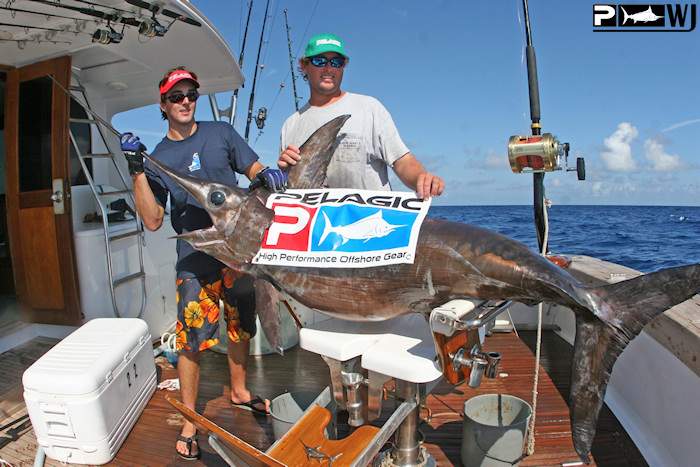 Bait presentation is vital, however if you are not in the right location, then it is completely irrelevant at any rate. Their are prime locations all along the Atlantic and Gulf of Mexico for Swordfish. Just like during night time fishing, target the same deep drop offs along the continental shelf, sea mounts, or near-shore ocean ridges. In many coastal areas of the Atlantic, these places with depths between 1000'-2000' are optimal. Most of these Broadbill are residential throughout the year and can be targetted on any given night.

Below: Getting ready to release another sexy Sword... 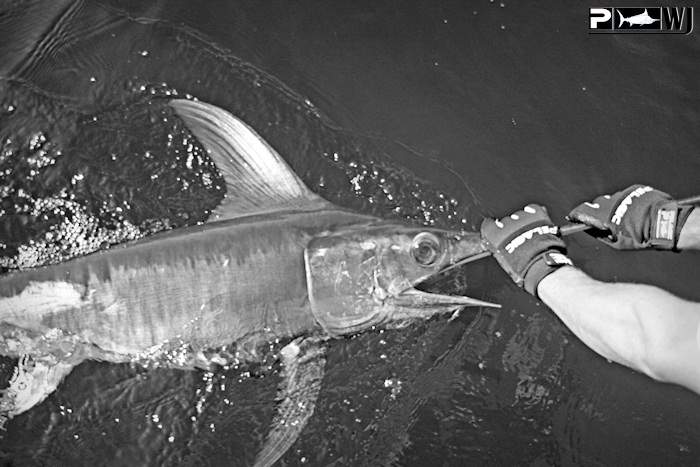 Swordfish hang very deep during the middle of the day. It is essential that you fish extreme depths during this time. Ideally you want to stay just a couple hundred feet off the bottom depending on the total depth of the area/structure. Deep dropping a bait requires a heavy weight ... upwards to 10lbs depending on currents and upwellings. Often a breakaway weight is the most logical method depending on how you rig. It is important that you know exactly where your bait is in the water column at all times. Your leader and weight should be set up so that everything is streamlined to prevent tangling. If a bait is tangled in the leader or wrapped it, then it is virtually useless.

Keep an eye on the line/tip. A trained eye is a result of vast experience. You must learn to distinguish what may be a pickup versus random erratic motion through the water. You have to remember that your bait is over 1000' down, and detection of a rod bounce could be anything from a small pinner Sword or even a 400lb brute. It is important to stay on top of the game and get tension immediately to prevent either gut hooking or the fish spitting the bait.

Below: The crew carefully sticks a gaff into a quality Sword... 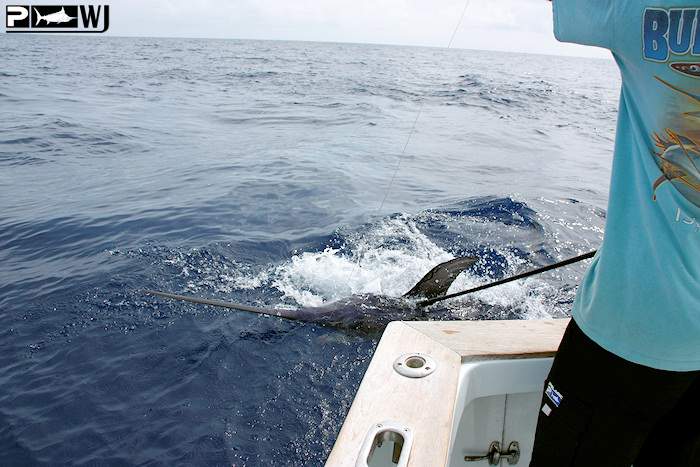 Swordfishing is a time consuming process. You may go hours and hours of waiting without hooking up to a single fish. It is then that methods are modified and optimalized in hopes of better success. Knowing where you bait is and where the most consistent hits along the structure are educate the angler providing useful knowledge that is utilized for future success. It takes a special breed of angler to do this type of fishing. You could go just about anywhere around the US Coastline and hammer fish all day long, but to duke it out on the water hour after hour in the hot sun just waiting for a broadbill to inspect a bait down deep below takes a little extra patience. However, the rewards could be quite great and daytime Swords up to several hundred pounds have been landed.

Below: Teamwork Pays Off... 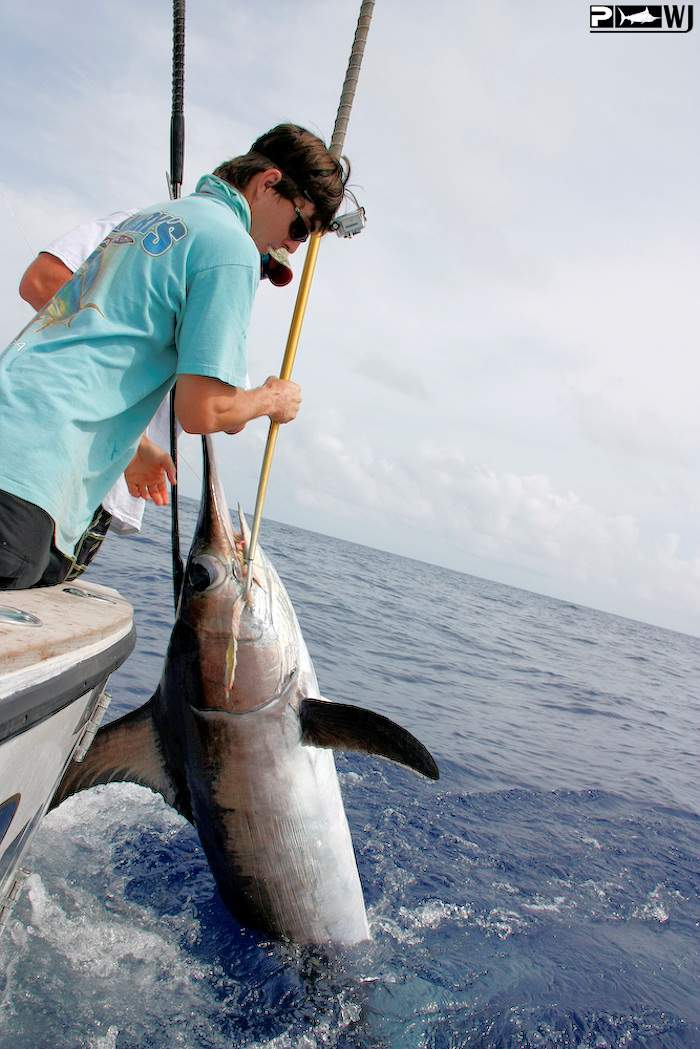 The Future of Swordfishing

While many, if not the majority of the swords off FL are released to go back in the wild and breed , Swordfish are highly prized for table fare, which unfortuantely has led to their moderate decline due to commercial fishing in the North Atlantic. Strict laws have been in place throughout the world to help preserve these great fish and they are making a respectable recovery. Stocks are currently stable for anglers to take part in an epic Swording adventure.

Florida is and remains one of the top Broadbill destinations in Northern hemisphere. Due to advance techniques and new breakthroughs utilized by Capt Nick and others, many locations throughout the world are learning to take advantage of their untapped sword fishery. As time progresses, more people will naturally take part in the sport, and new methods will ultimately be discovered. As long as our stocks remain protected, then future generations will have a chance at enountering one of the ocean's great deep-water predators.

Below: Katie poses with her 196lb trophy Sword...

To book a Trip with Capt. Nick Stanczyk on the B n M out of Bud n' Mary's Marina , please click the link below for more info...

Check back with the Waterman's Journal for more of the latest Sword Reports from Around the World.