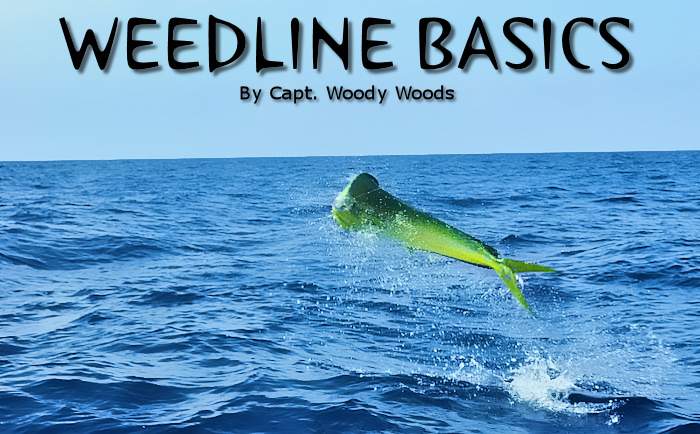 Summertime here off the coast of Louisiana represents my favorite time of year for fishing. The run down the Mississippi River is warm, the seas are near flat almost every day, and there’s much more to catch than just tuna and wahoo. The loop current stemming off of the Gulf Stream brings massive mats of Sargasso weed, and when the wind and the currents oppose, it makes for mile long lines of grass and debris. These massive mats of grass provide cover for bait, which in turn attracts pelagic predators such as mahi mahi, billfish, tuna, and wahoo. One of the best methods of targeting these fish is by trolling a spread of either artificial baits, naturals, or a combination of both, along these grasslines.

Below : An aerial Mahi gives Hunter and Woody an air show... 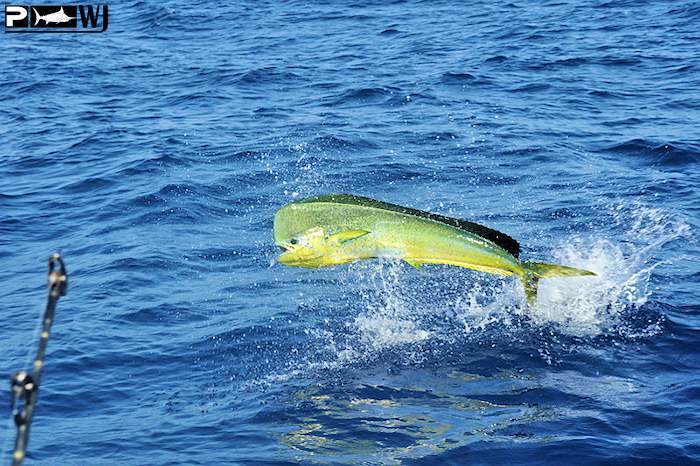 Trolling a spread of six to eight lines represents a school of bait. Most boats pull two short flat lines close to the boat, right off the corner of the transom, one or two baits on each rigger, a single bait right down the middle run straight from the rod tip, and another long bait often called the “shotgun” off the center rigger, way back in the spread. In nature, the most healthy, physically adept members of a school of bait will be at the head of the pack, leading the way. For this reason, I like to pull my biggest lures off the corner position. Usually your biggest billfish and tuna will come and hit these lures real close to the boat. Sick, old, or weak fish usually bring up the rear of the pack, and for this reason, the shotgun bait sees a lot of hits. I prefer a straight running lure or bullet-headed lure in the shotgun position, as it makes an easier target for predator fish to strike at than a big bait which dances all over the place.

Below : Posing with an awesome Bull Dolphin... 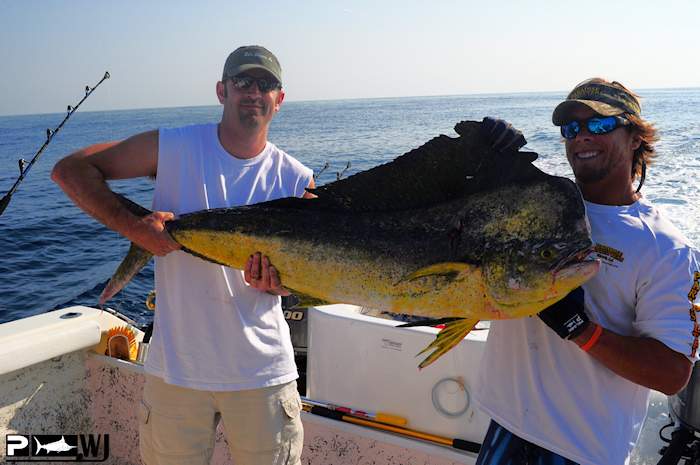 I often get asked about my favorite colors, and there are a lot of different theories around as to what the best colors are. While I have personally seen a lot of fish come off of crazy color combinations such as Mexican flag, orange, root beer, pink, etc., I prefer to run baits whose color most closely represents the most prevalent bait in the area at that time. “Matching the hatch” is a good strategy in any waters. If there are a lot of skipjack in the area, I like running baits with a lot of black and purple in them. If dorado frequent the area in which you are fishing, baits with blue, green, and yellow do well. Massive schools of blackfin would bring about baits with black and gold or yellow in them. Around here, we have a lot of flying fish in the area most of the year; so blue and white baits see more action than almost any other color combination.

Below : Billfish are common residents under a solid weedline... 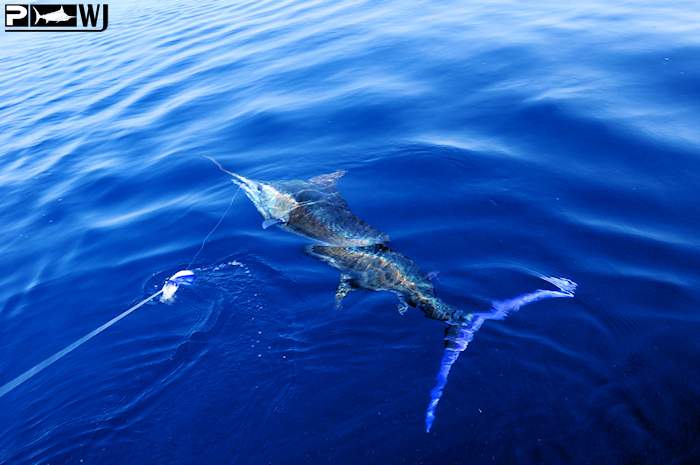 I like to pull all artificials when searching an area, as they allow a faster trolling speed than naturals. Artificials run well between 7 and 10 knots. When pulling naturals, such as rigged ballyhoo, mullet, and Spanish mackerel, these baits tend to wash out if pulled at the higher speeds with which artificials can be pulled at; for that reason, naturals do well when pulled from 4 to 6 knots. When initially arriving on a good weedline, artificials do a good job of raising a lot of fish. But if they become finicky, I will switch to almost all naturals, as it usually will coax fickle fish into eating.

Below : Capt. Woody about to release a beautiful Blue Marlin... 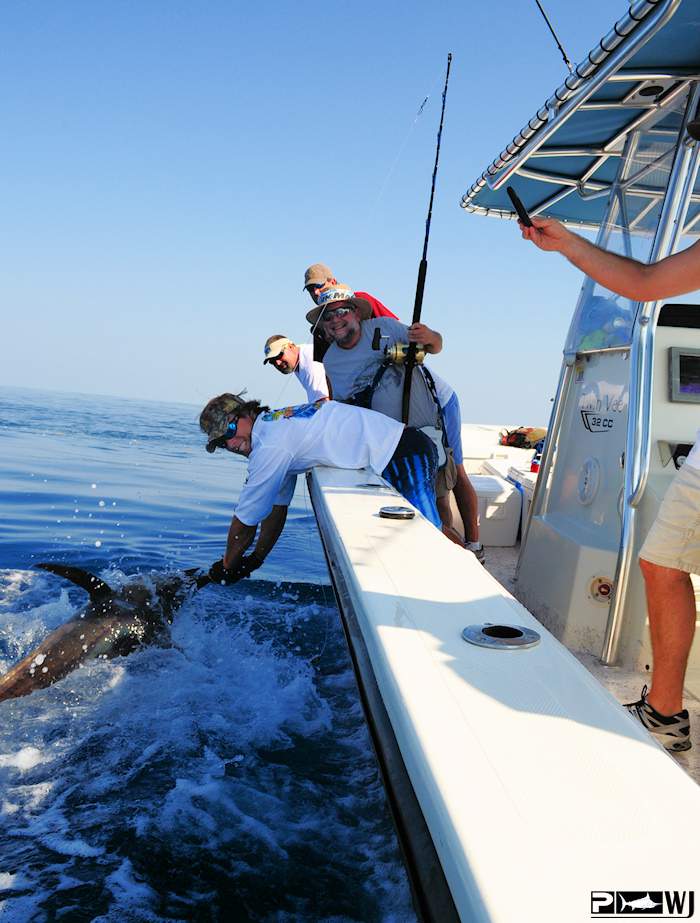 While there are certainly certain locales in the world which require different techniques for having the optimum chance at harvesting trophy tuna and billfish, the nice thing about the weedlines is that they frequent many parts of the world, and they all will hold fish, especially mahi mahi and marlin. It’s a special feeling when you’re up in the tower scanning the horizon, and you see a killer line in the distance, as it almost always guarantees that reels will be screaming in a matter of minutes.


Below : Cashing in on success! Woody and crew collect on some recent winning Wahoo 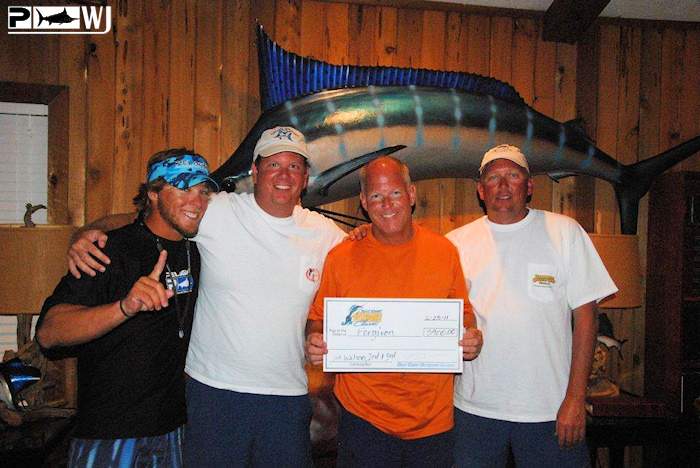 Click Below to view the latest video from Paradise Outfitters 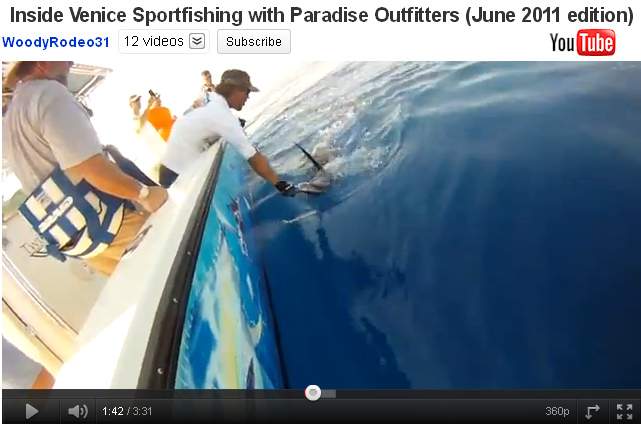