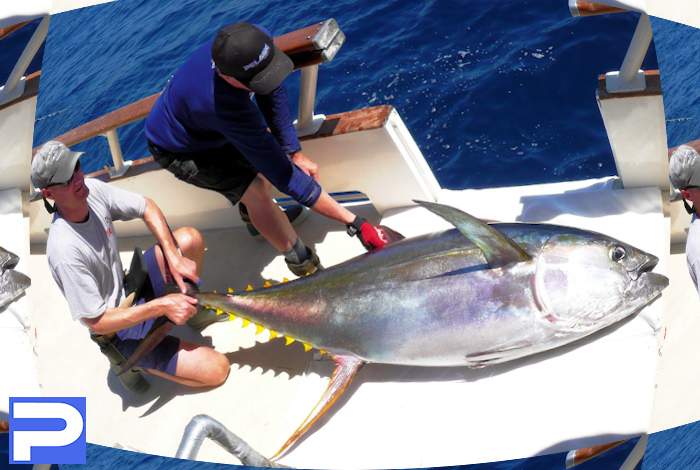 Pelagic and The Waterman's Journal are extremely honored to have Senior Scientist Kurt M. Schaefer of the Inter-American Tropical Tuna Commission (IATTC) to share what goes in to their detailed research regarding Yellowfin Tuna , and why it is important. Their studies were conducted around the chain of four volcanic islands called the Revillagigedo Islands off Mexico's Pacific coast. The ecosystem presented in the deep Pacific islands are known to contain at times some of the largest Yellowfin Tuna in the world and makes it an excellent area to conduct the study. By inserting various tags, the info gained can help us understand migratory movement amongst other valuable factors. While Tuna is one of the worlds most desired and harvested fish commodities, it is vital that we begin to understand and manage before its too late.

The researches will conduct their study aboard the long-range fishing vessel the Royal Star ( royalstarsportfishing.com ) based out of San Deigo, CA .

Below, you will find a complete write-up and pictures courtesy Kurt M. Schaefer surrounding the tagging study...

The IATTC is responsible for conducting research on the biology of tunas within the eastern Pacific Ocean (EPO) in order to make informed management recommendations to the coastal nations and the nations with vessels that fish in the EPO. Prior to 1980, several tagging cruises focusing on yellowfin and skipjack tunas were conducted in Mexican waters, including around the Revillagigedo Islands. Since then many aspects in the dynamics of the fisheries for yellowfin in this area have changed, and additional tagging studies, particularly using archival tags, would be useful for assessments of this resource. It could be particularly useful to know more about the movements and behavior, including utilization distributions, of yellowfin tuna and wahoo in various regions of the EPO, including the Revillagigedo Islands Marine Reserve. This area is characterized by extremely high biological productivity, historically supporting large concentrations of tunas. In addition, because of the closure of the Marine Reserve to fishing activities since 2002, short-term recaptures of tagged fish should be eliminated, resulting in more recaptures of fish at liberty during extended periods.

Beginning in 2000, the IATTC reinitiated large-scale tuna tagging studies with its bigeye tuna tagging project, focusing on the equatorial EPO. In that project, significant numbers of yellowfin tuna have been tagged with dart tags. Also, since 2002 the IATTC has been tagging yellowfin tuna with archival tags off Baja California, Mexico, as part of the Tagging of Pacific Pelagics (TOPP) program, one of several programs supported by the Census of Marine Life (COML). Concurrent tagging of yellowfin tuna with both dart and archival tags within the Revillagigedo Islands Marine Reserve will be ideal for obtaining a better understanding of the movement patterns and behavior relative to bathymetric and environmental features in the EPO.

The archival tags intended to be used for yellowfin tuna in this study are capable of recording data on depth, internal and ambient temperature, and light level every 30 seconds for about four years. Estimates of dawn and dusk events obtained from ambient light levels can be used to estimate daily positions, from which movement paths of the recaptured yellowfin can be reconstructed. The depth and temperature data can provide useful information on behavior and habitat utilization. The estimated movement paths and ambient environmental data obtained from the archival tag data sets, when coupled with data from other sources, such as sea-surface temperature maps on the same time-area scales, can provide insights into the behavior of yellowfin and their utilization of the environment.

Regarding the tagging of wahoo, very little is known about any aspect of the biology of this species. Nevertheless, it is an extremely valuable resource, highly sought after for sport and food, and is historically an important component in the sport fishing catches around the Revillagigedo Islands. Tagging wahoo in that area will be worthwhile because it will yield data with which to determine whether the species is a permanent resident or a visitor in the Marine Reserve.

The first permit received from the Comision Nacional de Acuacultura y Pesca (CONAPESCA) of Mexico, requested by INP and IATTC, was to conduct fishing
activities within the Revillagigedo Islands Marine Reserve, with the objective of tagging and releasing yellowfin tuna and wahoo during January-February in 2006 and 2007. That permit was extended for the period of January -May of 2008 and 2009, and we are in the process of renewing the permit for the period of 2010-2011.

Below: Kurt M. Schaefer quickly battles a large Yellowfin Tuna to the boat to be tagged and released... 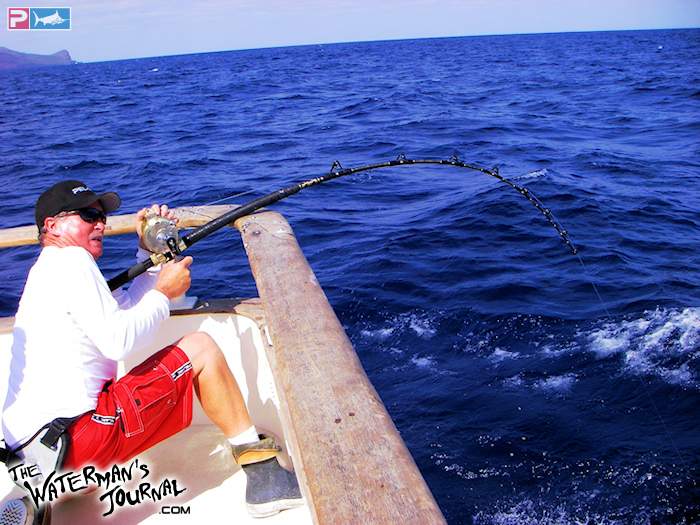 Objectives of the proposed project

To conduct a tag-and-release project for yellowfin tuna and wahoo within the Revillagigedo Islands Marine Reserve, using conventional plastic dart tags and archival tags (electronic tags that record and store data). The primary scientific objectives will be to obtain information on movements and behavior of these species, including habitat utilization, within the Marine Reserve and in areas to which they might move.

The proposed project will be carried out on a sportfishing vessel, through a partnership between the INP and IATTC, the owners of the vessel, and participating sportfishers. The fishers will catch the fish, which will be tagged and released by INP and IATTC scientists aboard, with the help of the crew.

Below: One of MANY Yellowfin Tuna specimens that is a perfect candidate for the tagging study... 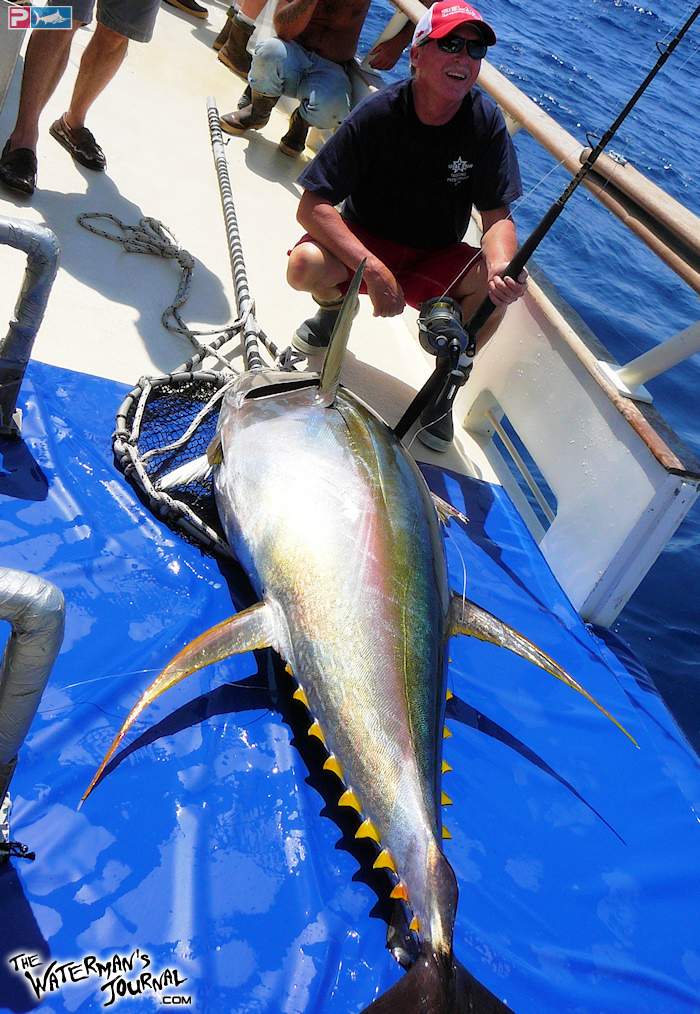 The project will use the 92-foot US-flag long-range sport-fishing vessel Royal Star , operated by the owners, Messrs. Tim Ekstrom and Randy Toussaint (http://www.royalstarsportfishing.com) . The Royal Star will depart for the Marine Reserve from its home port of San Diego (USA), with a total of 18 passengers, plus scientists from the IATTC and INP. A detailed logbook of all activities aboard the vessel during each cruise would be maintained by the scientists. At the end of each cruise, a report on the fishing and tagging activities would be drafted, and a copy sent to CONAPESCA and any other agencies within Mexico that requests it.

Yellowfin and wahoo of as great a size range as possible will be tagged throughout the Marine Reserve, using landing nets, tagging cradles, and tagging poles with sequentially-numbered plastic dart tags with stainless steel applicators. For each fish tagged and released, the date, time, location, species, length, condition, and tag number will be recorded. For yellowfin, we expect to deploy about 500 plastic dart tags tags per cruise in fish of about 75 to 150 cm in length. The dart tags would be placed in the dorsal musculature at the base of the second dorsal fin, for those landed and for larger specimens tagged in the water using poles as close to that location as possible. The number of archival tags deployed per year should be about 50. The archival tags will be implanted in the peritoneal cavities of yellowfin specimens. For wahoo, we expect to tag about 300 specimens per cruise, using similar techniques. Rewards of US$5 for the return of each dart tag and US$250 for each archival tag will be paid.

Each of the 18 participating sportfishers aboard the Royal Star will pay a fare plus an additional US$1,500 to cover the cost of an archival tag and the potential reward for its recovery.

Below: A couple various smaller Tuna get tags inserted... 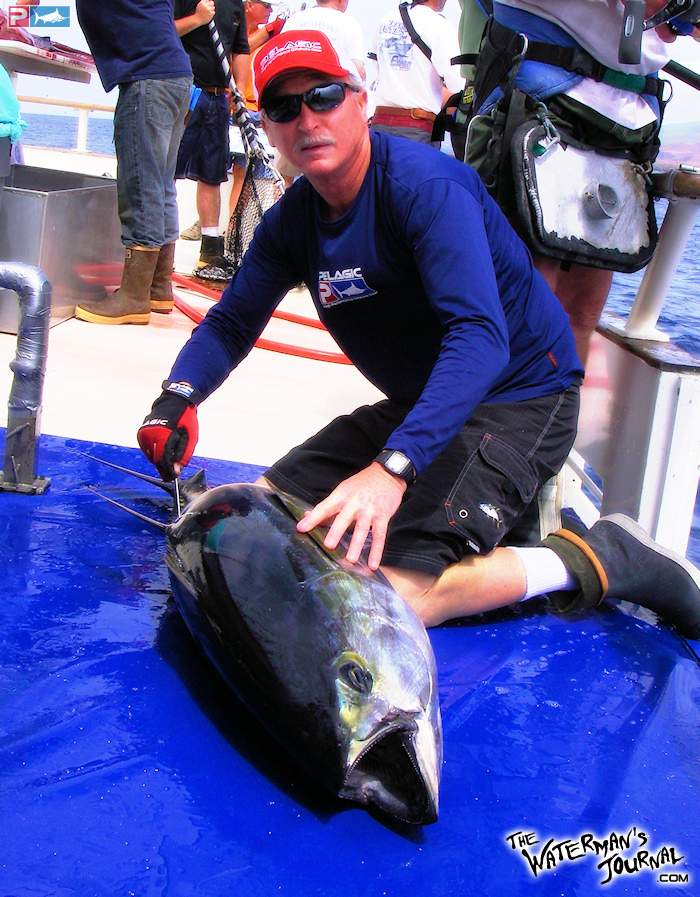 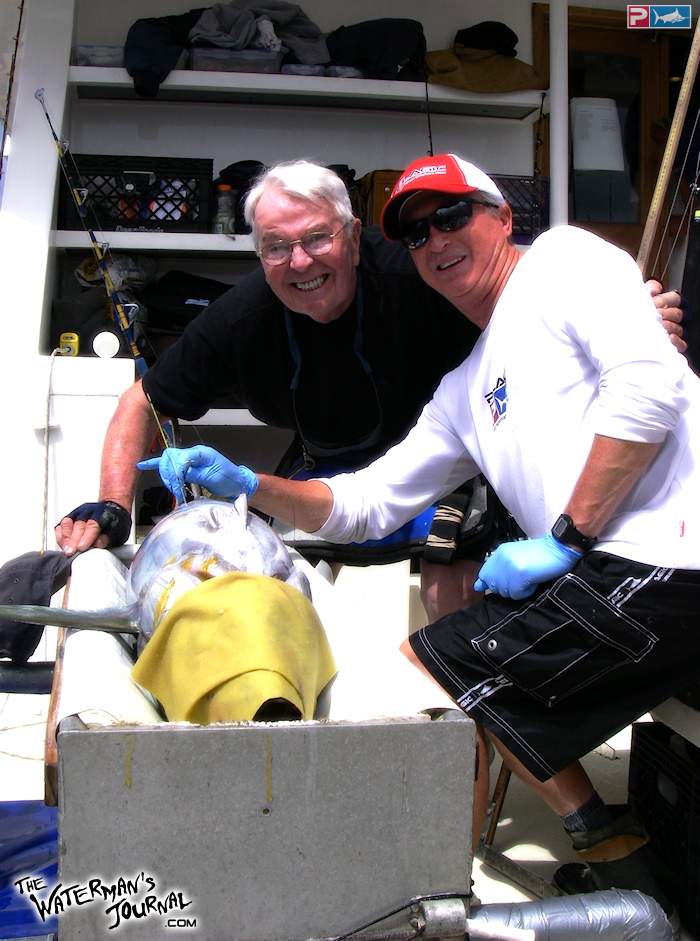 US-flag long-range sport fishing vessel Royal Star on a fishing trip, February 11 to 25, 2009, to the Revillagigedo Islands Marine Reserve, Mexico, for tagging yellowfin tuna and wahoo. The tagging project is a collaborative effort between the IATTC, the National Institute of Fisheries of Mexico, and the owners of the Royal Star. The permit obtained from the government of Mexico for this project provides a unique opportunity to conduct a comprehensive scientific evaluation of the movements and behavior of yellowfin tuna and wahoo within the Revillagigedo Islands Marine Reserve and in areas to which they might move, through no-retention tag-and-release fishing trips aboard the Royal Star. The cruise was highly successful as 557 yellowfin were landed aboard the vessel, measured, and tagged with conventional plastic dart tags, with another 11 yellowfin pole tagged in the water using plastic intra-muscular tags. 162 of the tagged yellowfin were greater than 100 pounds, and 12 greater than 200 pounds.. An additional 21 yellowfin were landed, measured, and had archival (electronic data storage) tags surgically implanted in their peritoneal cavities (5 released at San Benedicto Island, 5 at Socorro Island, 5 at Roca Partida, and 6 at Clarion Island). In addition 79 wahoo (mostly 20 to 40 pounds) were tagged and released in the water with plastic intra-muscular tags.

Below: 300lbs of Tuna Thunder, this Yellowfin becomes one of the larger subjects... 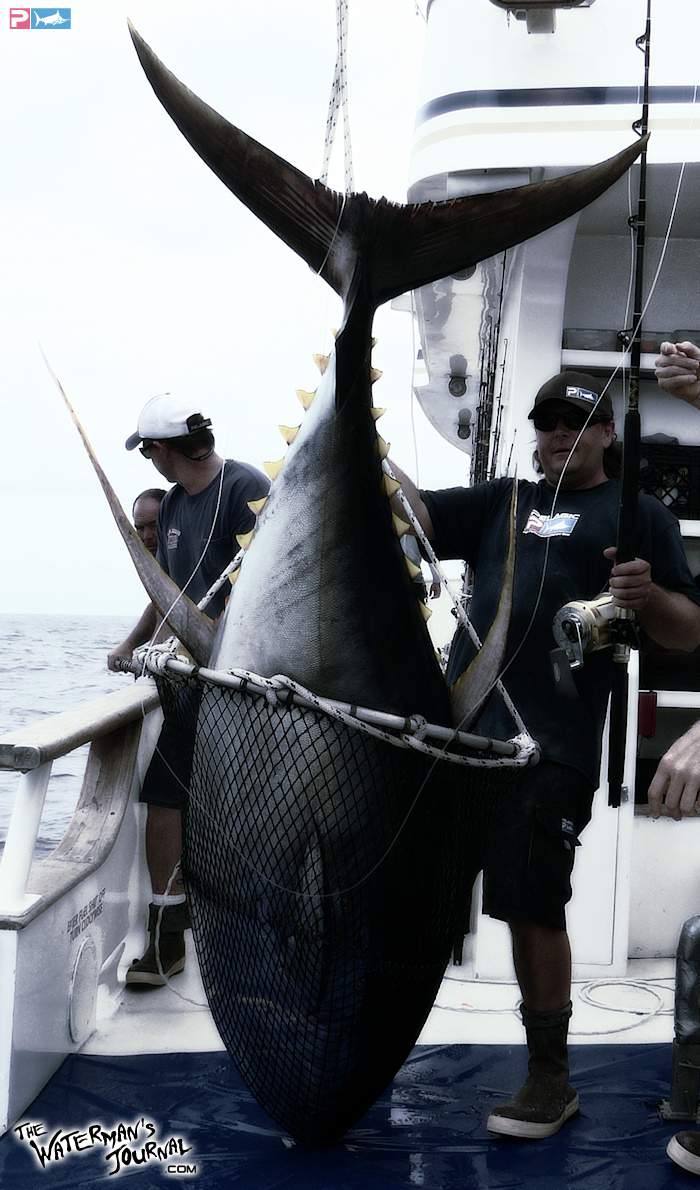 Below: Another Massive Yellowfin... 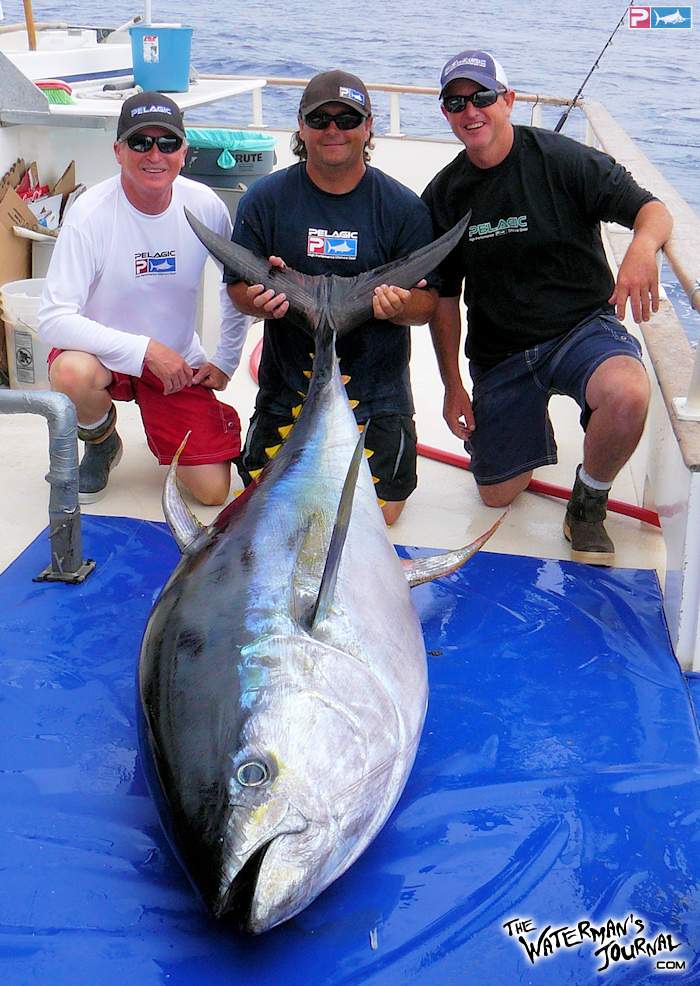 Below: Another Cow YF gets hoisted up... 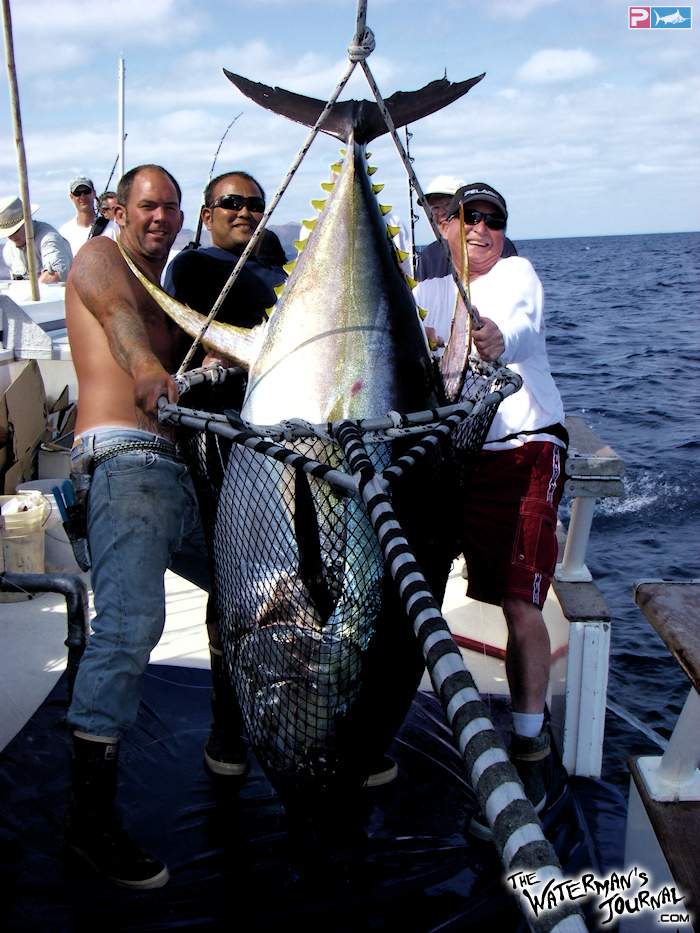 For more information on the IATTC and its tagging studies or to book a long-range Tuna Trip * aboard the *Royal Star , simply click one of the images below... Tell them The Waterman's Journal sent you!