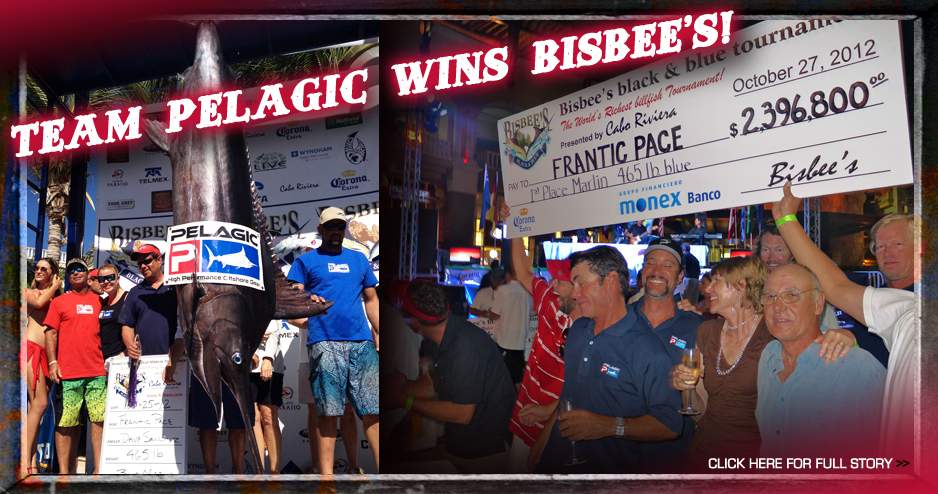 Cabo San Lucas, Mexico – Before the week of the Bisbee’s Black & Blue Billfish Tournament, the claim to fame for entrant Dave Sanchez was a 9-pound largemouth bass caught near his home in the Midwest United States. His first ever saltwater fish caught, a 465-pound blue marlin landed Thursday, October 25th, 2012, during the world’s richest fishing tournament, turned out to be the highlight of a week where one missed fish, or one-single bite meant going home empty handed versus going home a millionaire.

Sanchez and his team fishing aboard Frantic Pace were entered across the board in all jackpot categories. And, since no other team was able to weigh a qualifying fish during the 32nd annual tournament, the team aboard Frantic Pace took home a monstrous $2.396 million for their one fish – not bad a few days of “work”. That massive payout also happens to be the second largest single-team payout in fishing history; the largest payment is also credited to the Bisbee’s Black & Blue.

Below: Frantic Pace , with it's bright orange hull, at the shotgun start to kickoff the 2012 Bisbee's Black & Blue. 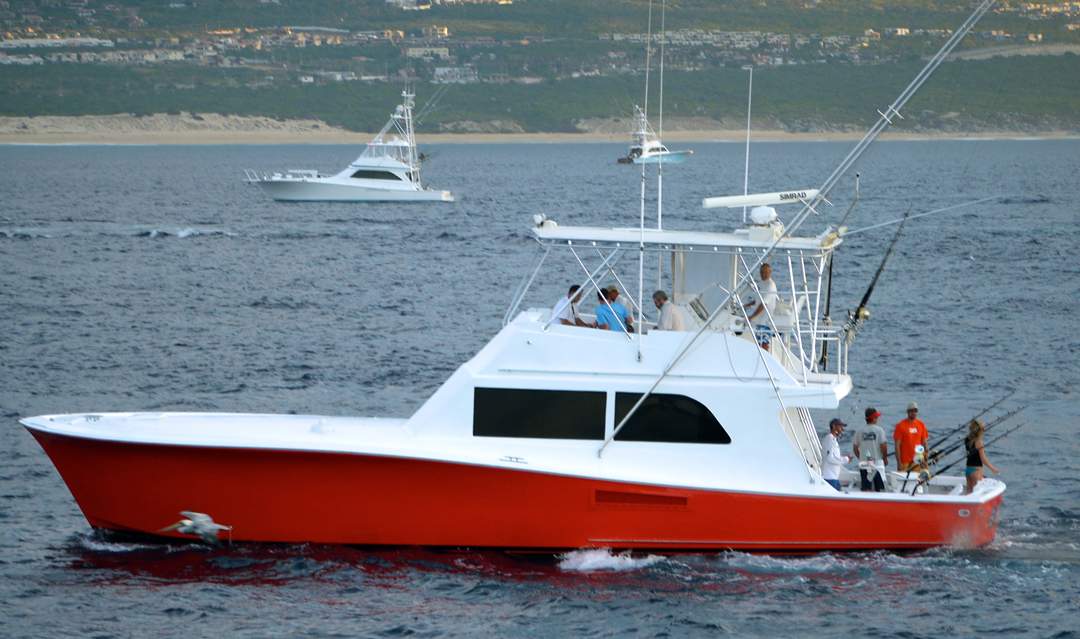 And, although Dave Sanchez was the angler who reeled on the great fish, he credits the crew of Frantic Pace for the catch and ultimately winning the tournament.

“It was a thing of beauty watching JT (Josh Temple) and Berky (Tony Berkowitz) go to work on the raging fish at the leader,” Said Sanchez after weighing their fish. “And with Herk in the wheelhouse – these guys are like a well-oiled machine when it comes to finding and landing big fish. No words can describe the feeling right now.”

At the awards banquet held the Saturday night following the conclusion of the three-day event, Tournament Director Wayne Bisbee addressed the crowd saying, “You know me, I always like to spread the money around. But, part of the appeal of the Black & Blue is the chance to win a really big check, and tonight that honor goes to the Frantic Pace team.”

The team’s victory did not come easy, however, and the story behind how the fish was landed is one to behold.

Sometime during the rugged hour-and-a-half long battle between Sanchez and the blue marlin, the snap swivel connecting the reel’s main line to the lure leader had opened. The only thing connecting the lure leader to the main line was a quarter-inch bend at the end of the snap that was holding a loose loop in the leader. When Josh Temple realized the predicament, he cautiously leadered the fish to within gaffing range for Tony Berkowitz. The fish came up green, still bucking wild, and Josh and Tony looked at each other knowing they were only going to have one shot at getting the fish.

Below: The opened snap swivel that made many hearts skip a beat // The $2.4 MM Blue Marlin 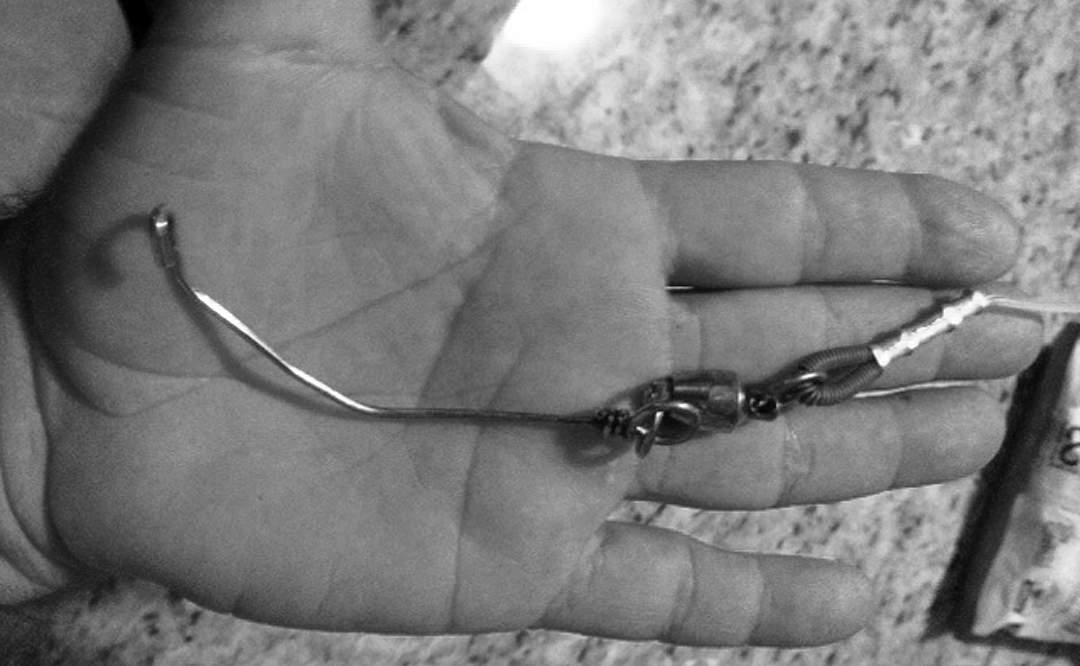 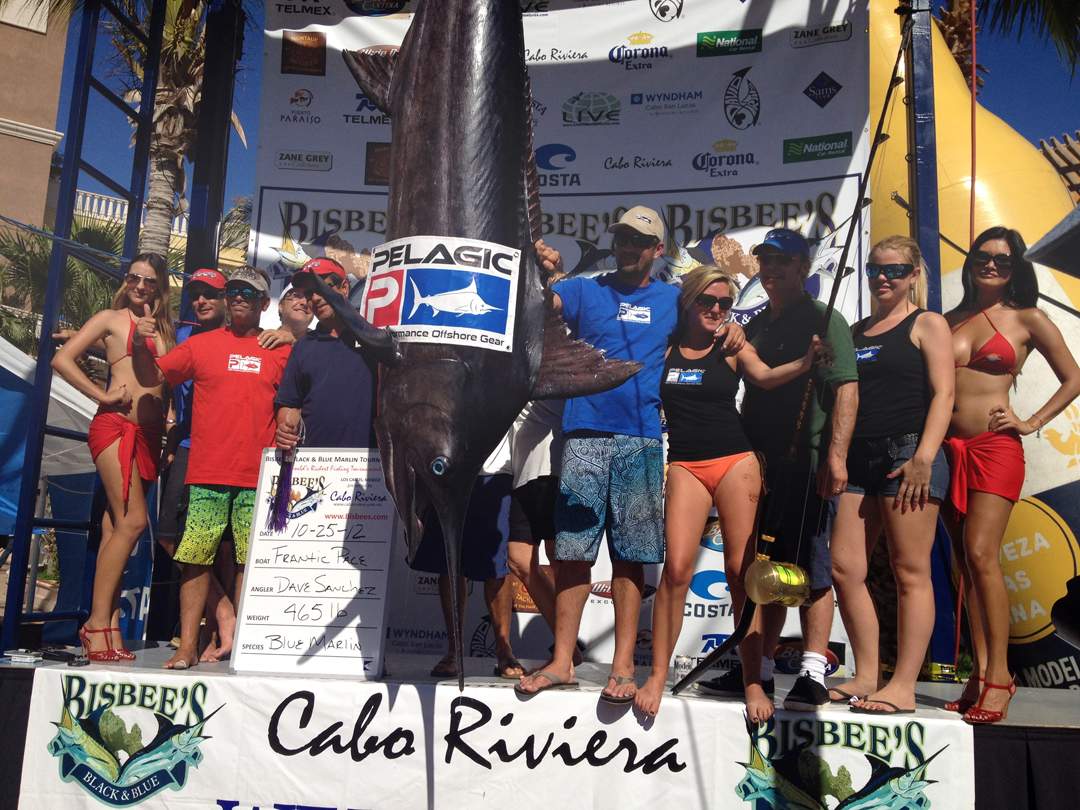 Using all his strength, Josh took a triple wrap on the leader and held on for dear life. In doing so, the leader came loose from the snap swivel – now the only thing connecting Team Frantic Pace to $2.4 million was Capt. Josh Temple. Tony came over the top with the flying gaff, knowing he would only have one opportunity to get it right, and hit a perfect shot that subdued the marlin, giving the team the chance to pull the great fish into the 53’ Pacemaker.

The leader scenario and the fact that angler Dave Sanchez was a first-time saltwater fisherman makes a great story in itself. What just might be even more remarkable was how the team came across this fish, at the right place, and the right time.

After being blanked on day one of the tournament, Capt. Tony Berkowitz went over some charts with Capt. Herk. Looking at water temperatures, chlorophyll levels, currents, and tides, Tony advised Herk to be at a precise location at an exact time (the time of the tidal swing) the next day. Rolling over their specified coordinates at the pre-determined time, the team watched in shock as the 465-pound blue marlin slashed its way into the spread before finally annihilating the HI-5 Purple/Black lure. You know the chaos that ensued from there… the rest is history. 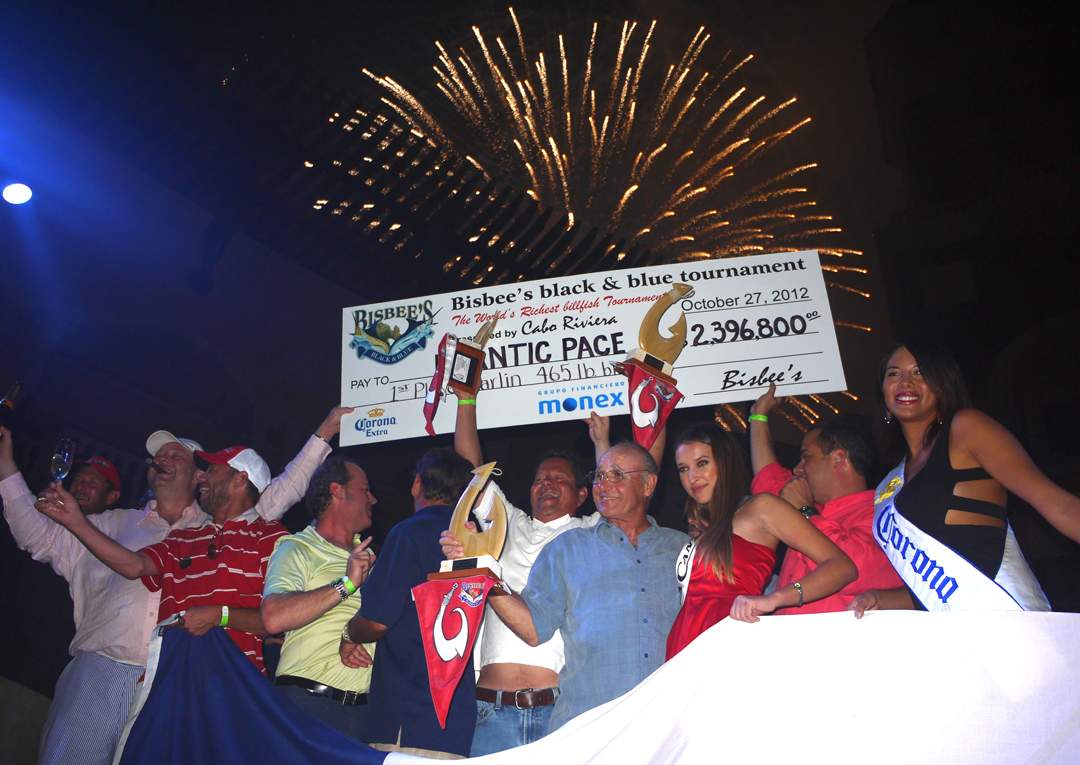 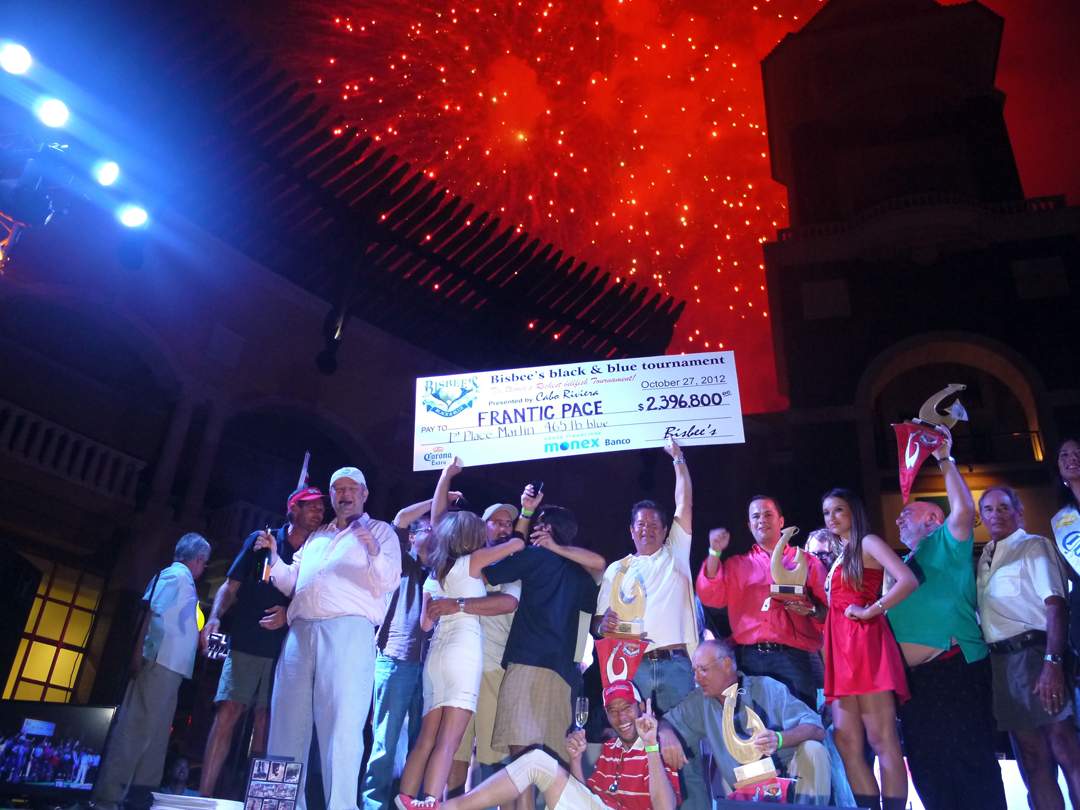 It’s not easy to win the Bisbee’s, hailed by Sport’s Illustrated as “The Super Bowl of Fishing” – 740 anglers completed the field of 106 boats, all with high hopes of going home millionaires from the 2012 event. Top captains and crew from all over the world travel to take part in the world’s richest sport fishing tournament. And, it’s not cheap either – it took $63,100 to be entered all-in in the daily jackpots.

A combination of skill, teamwork, and willpower set the stage from Team Frantic Pace to take home the big money and bragging rights as overall champions. A little bit of sheer luck goes a long way too.

“I'd rather be lucky than good any day,” a grinning Temple said after the tournament was all said and done. “But, that whole scenario, that was just a little too close.” Well put, Josh… Well put.

Below: Congrats to Team _Frantic Pace _on their $2.4 MM sweep of the Bisbee's Black and Blue Marlin Tournament!!! From everyone in the Pelagic family, we want to send out a MONSTER congratulations to Pro Team Captains Tony Berkowitz, Josh Temple, and Herk! Way to go guys, we couldn't be more proud and happy for you! 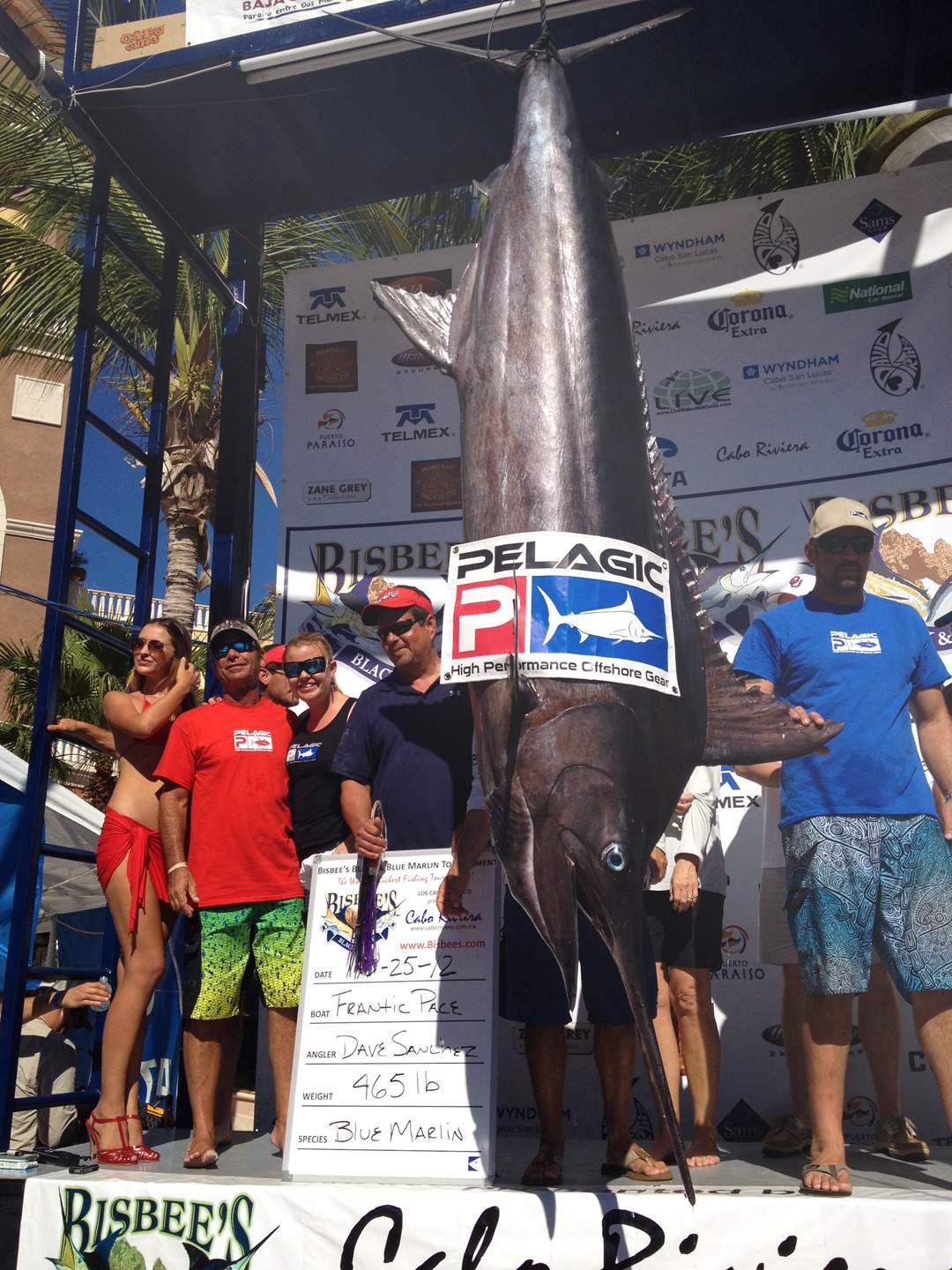