Summer 2017 is officially winding down with Fall approaching here on the Texas Gulf Coast. Our season so far has taken us from off our coast, to Louisiana and Mississippi. Through early Septmber we’ve caught 40 swordfish, two blue marlin and cart loads of groceries including wahoo, grouper, barrel fish and tilefish. 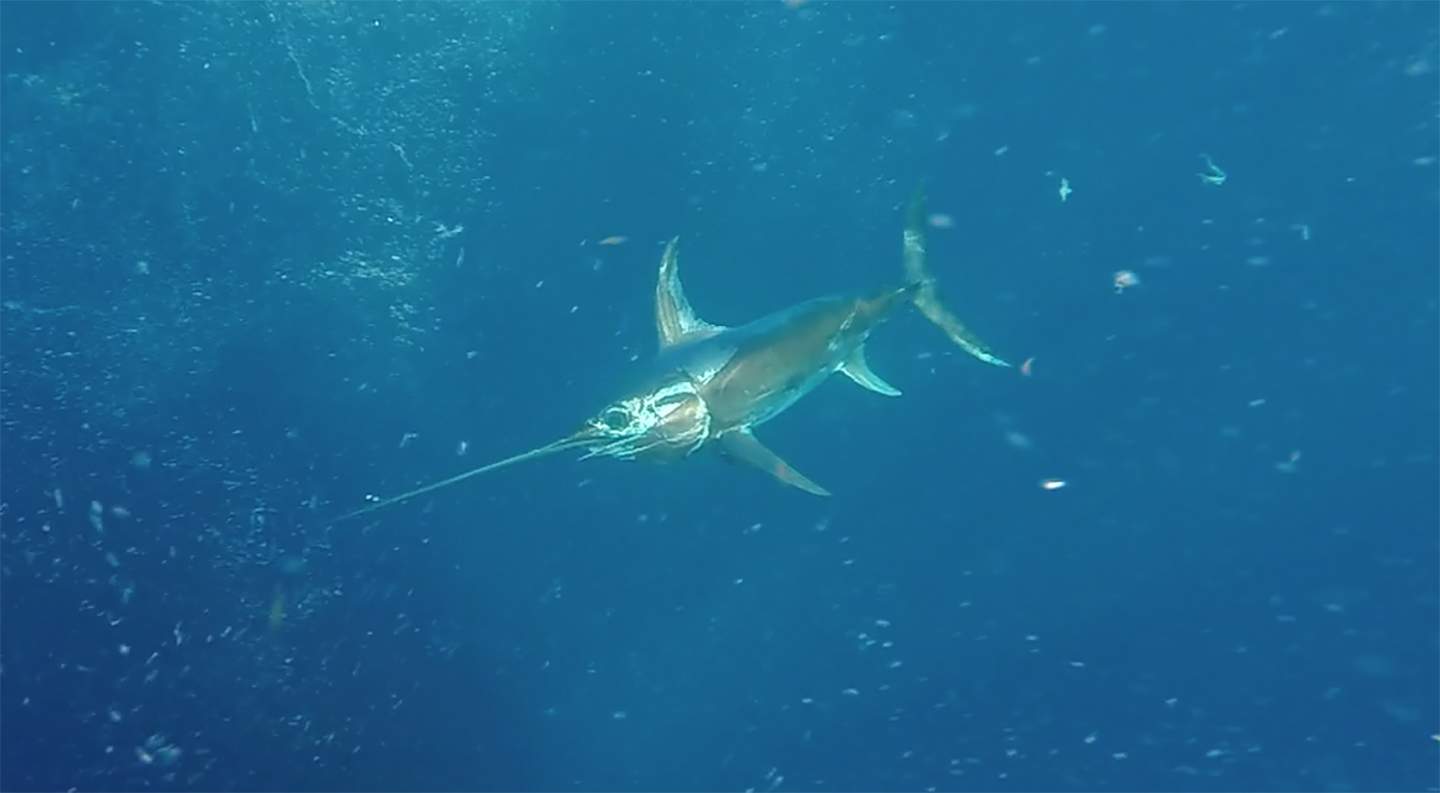 A nice Go Pro shot of a smaller swordy underwater, soon to be released. These ‘darts’ have the sharpest of swordfish bills.

In May we set up to prefish for the Mississippi Gulf Coast Billfish Classic featuring for the first time a Swordfish category totaling over 350K. Our home away from home was Hurricane Hole marina resort in Grand Isle Louisiana. A Great facility, great people and tasty cooking is sure to always be found there. 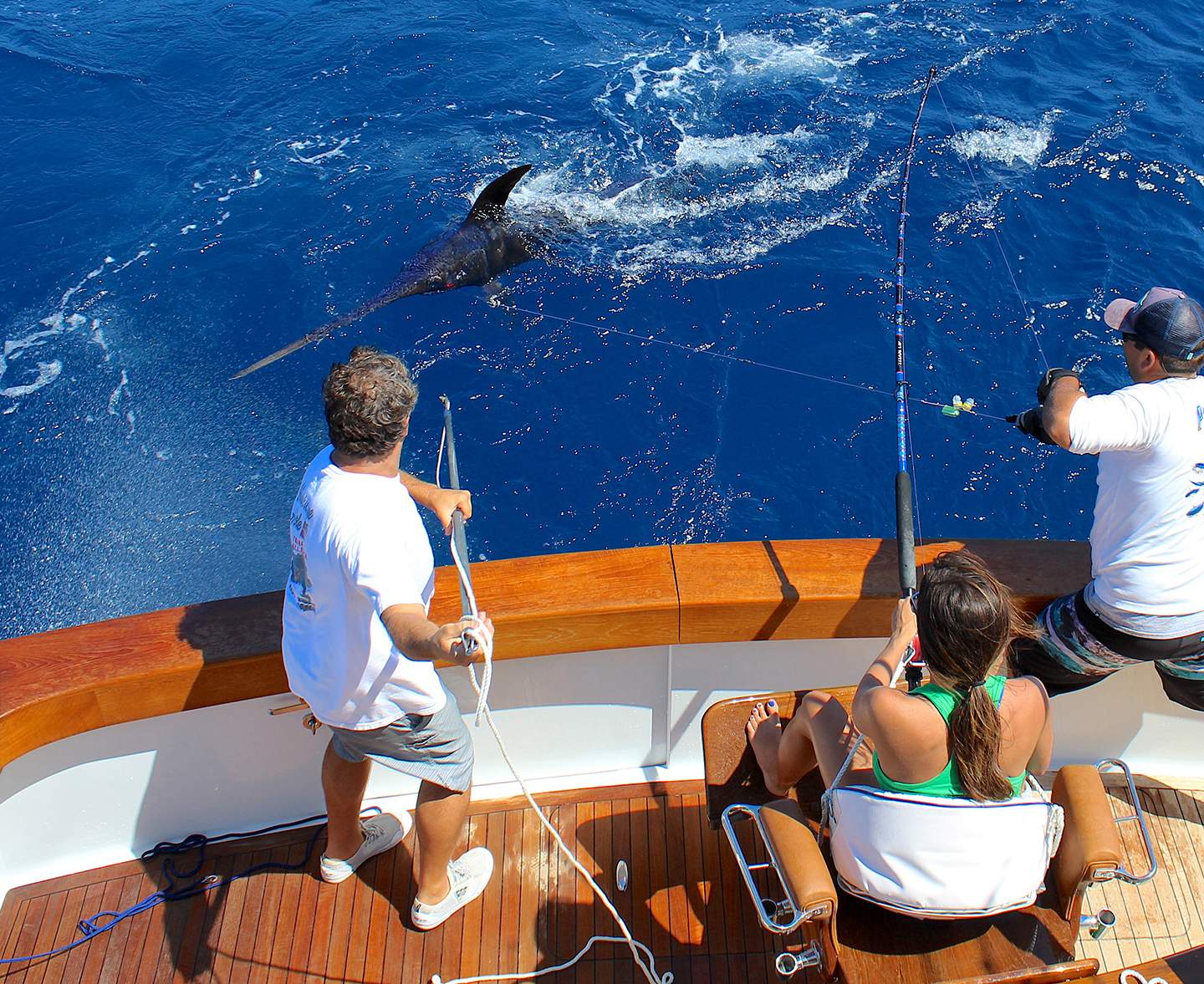 Louisiana daytimer about to feel the business end of a harpoon on the BADONKADONK, a beautiful 80’ Merritt based out of Grand Isle, LA.

The Mississippi Canyon and other areas offshore of the Mississippi river have become prime areas to target broadbills. Close proximity to port with an abundance of bait and structure help make Louisiana a target friendly environment. Nutrient rich waters also help contribute to the diversity of the species one may find throughout the year. 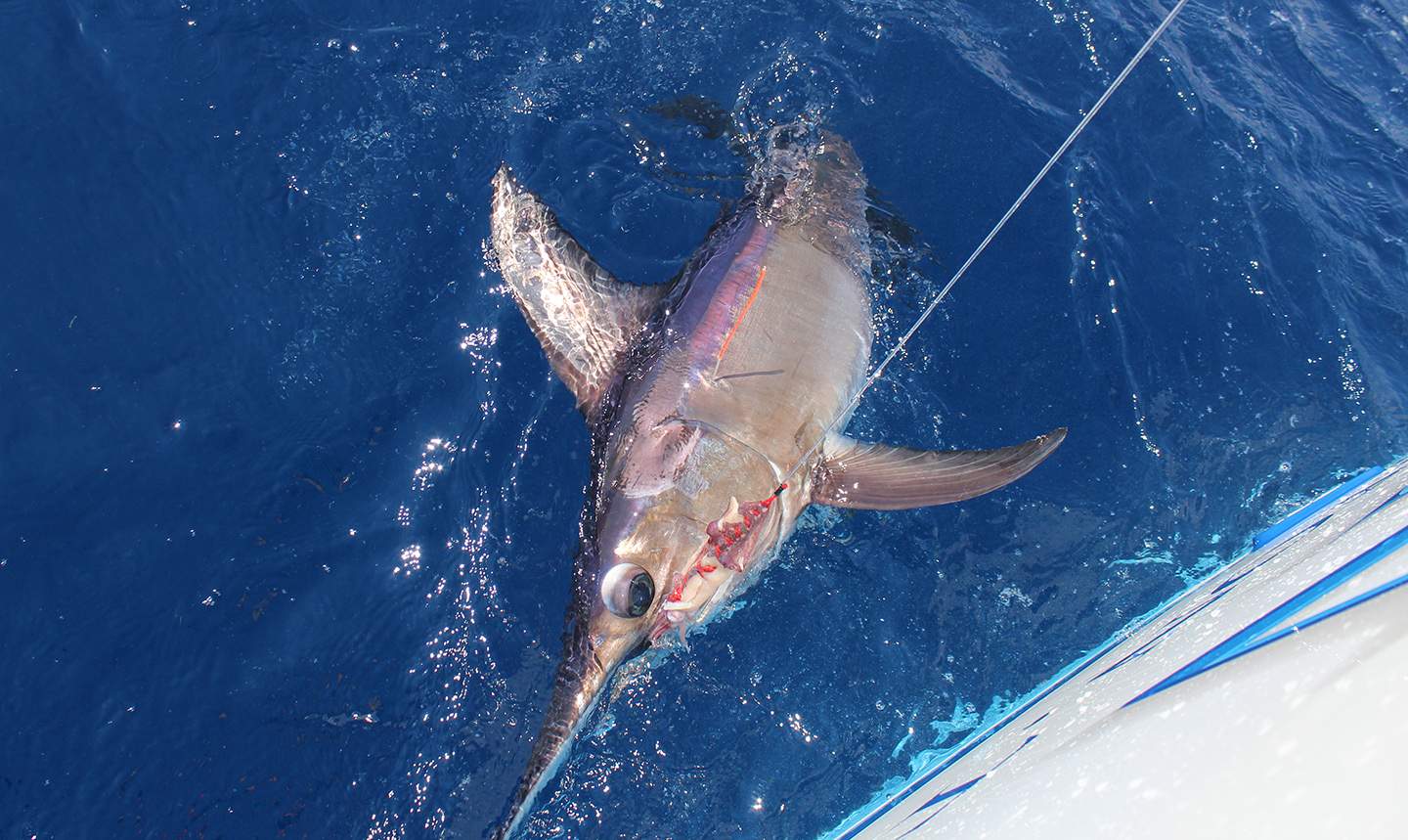 Broadbill tagged and ready to be released in good shape behind the transom. The vast majority of the fish we catch are released in good condition. Leaving the fish in the water and quick work removing the hook are key for a healthy release. 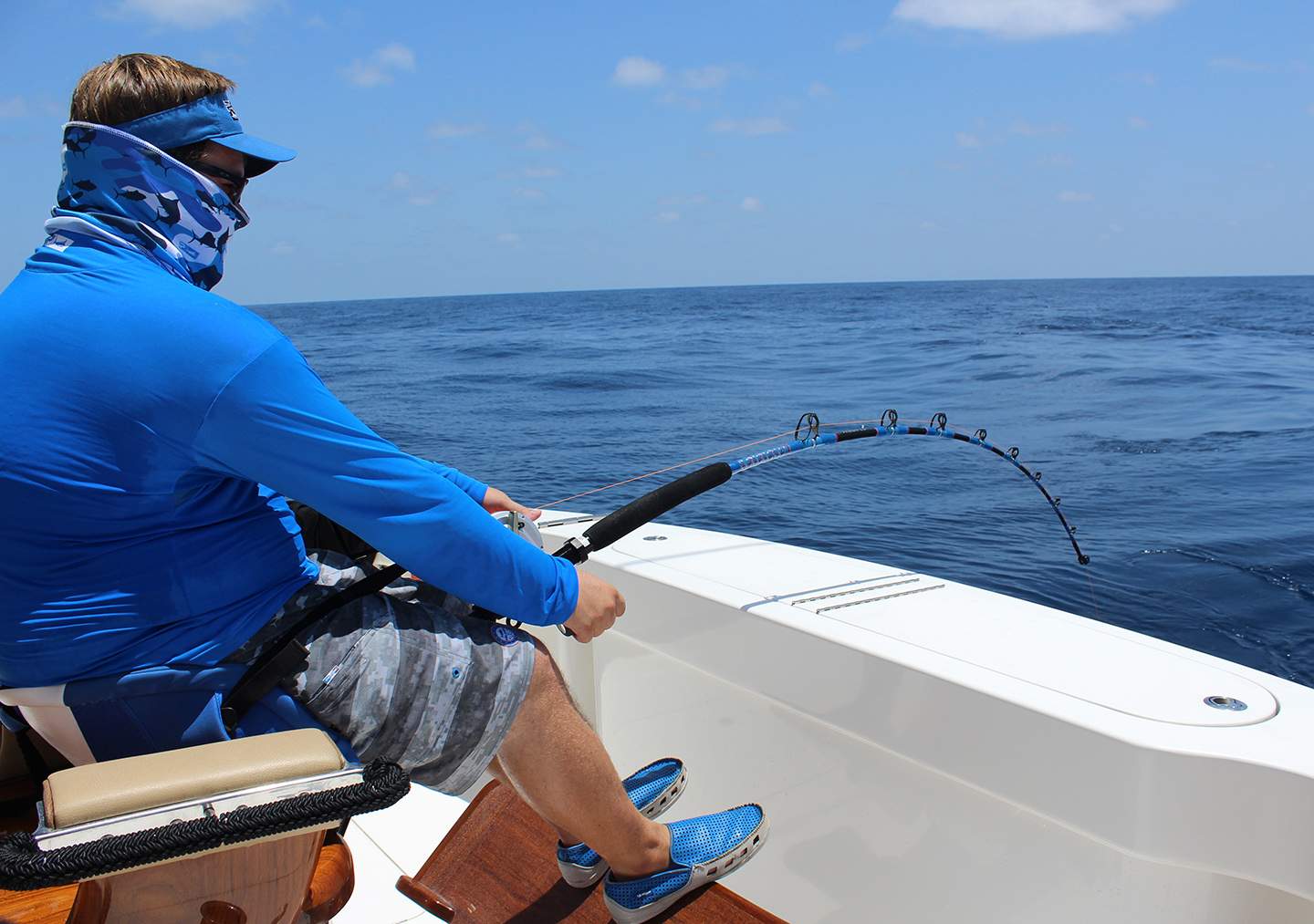 Bent on a nice swordy. Our hand-crank set-up includes a stout rod and a 50-size reel.

Most of the swordfish we catch are while using whole rigged squid. We have used several other types of baits including tinker mackerel, Spanish mackerel and strip baits. All in all it’s tough to compete for their favorite treat - a whole 8-12” squid.

Stomach contents of swordfish often reveal some pretty interesting things! This fish’s belly (below) was super full of a variety of deep-sea creatures that rarely see the light of day. Pounds of Arrow squid, viperfish and a partially-digested blue runner were found inside.

Like most predators when trying to fill their stomachs, swordfish can be indiscriminate eaters. 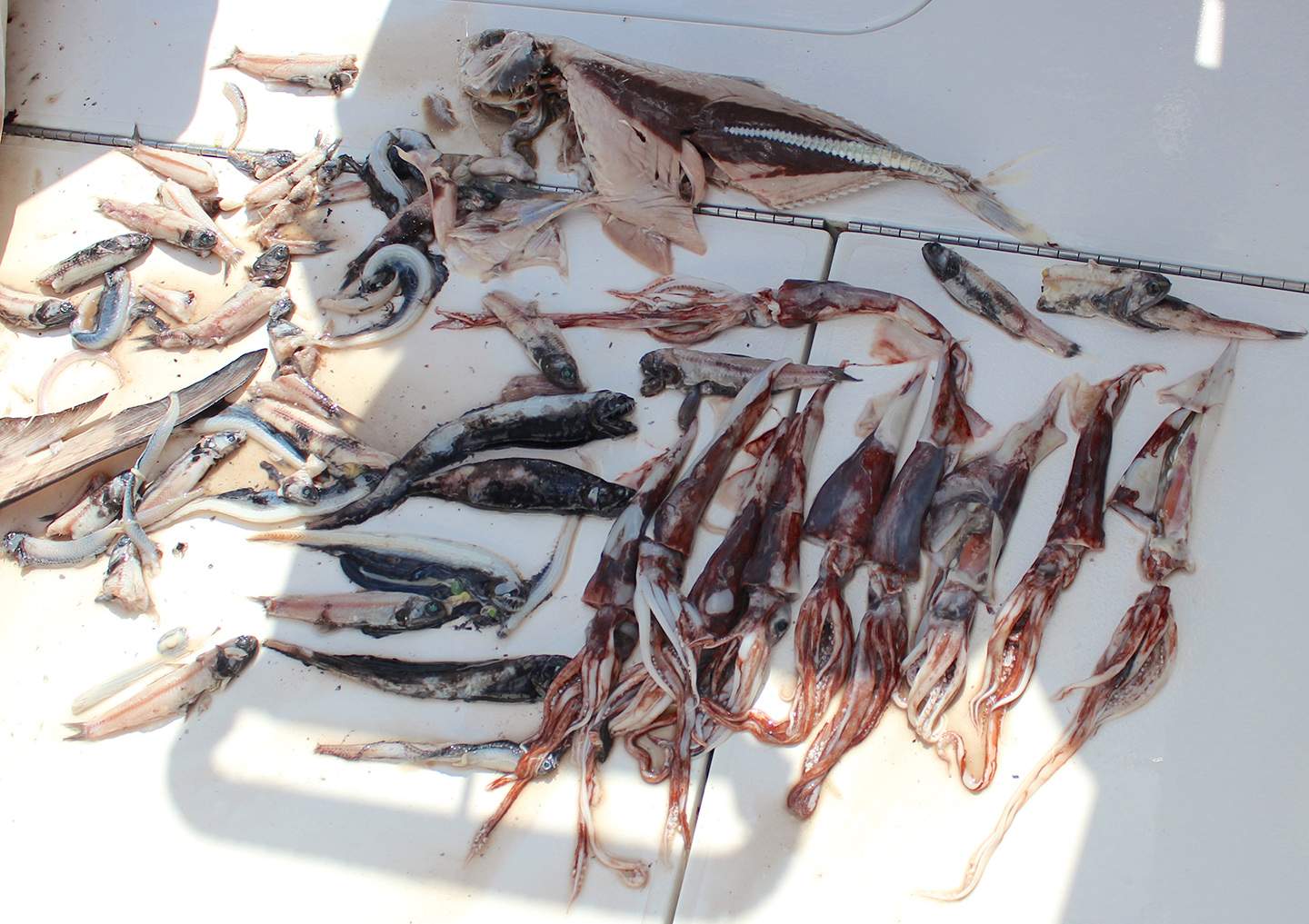 We can only assume that the fish in the below picture was eating a smaller fish while also being consumed by the swordfish…true food chain at work 1500’ below the surface. 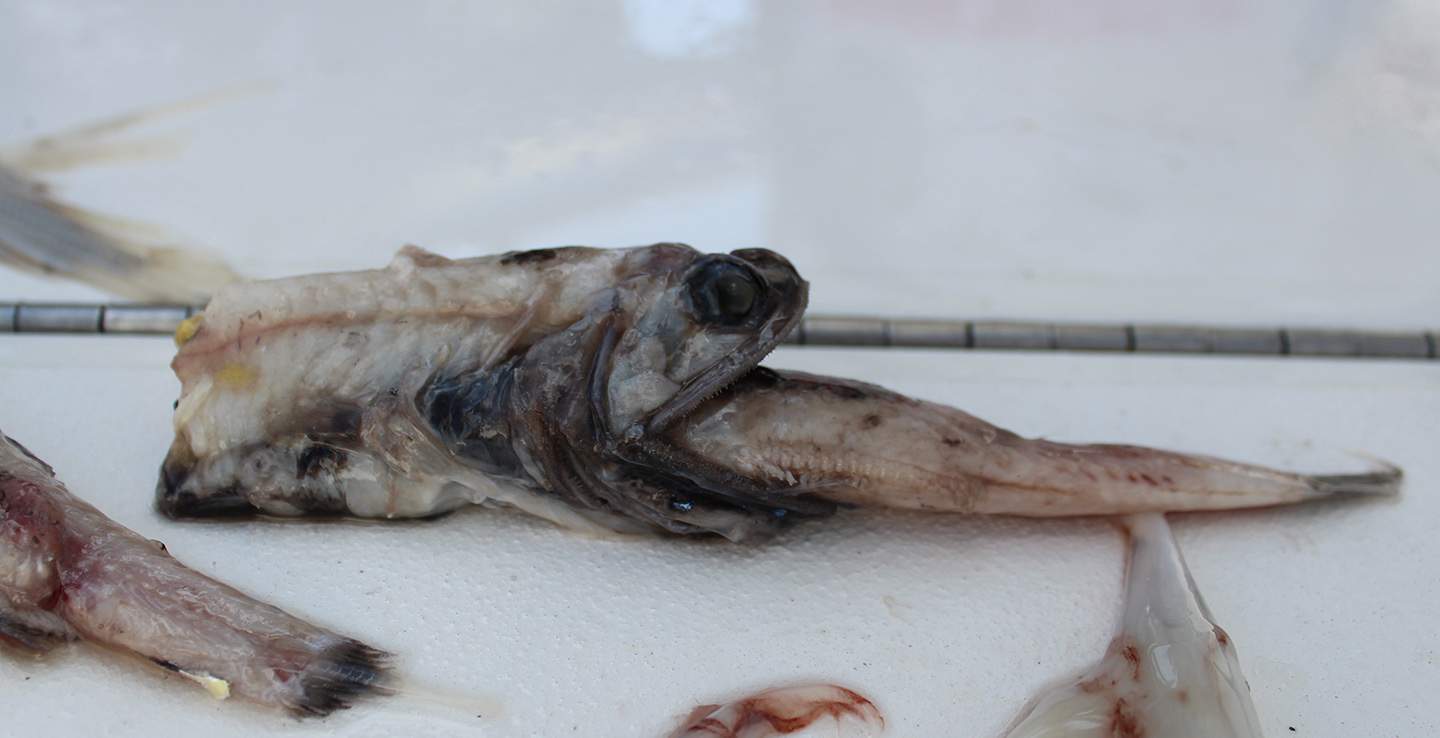 A pair of nice 250 lbers on the deck after tough battles this past July. 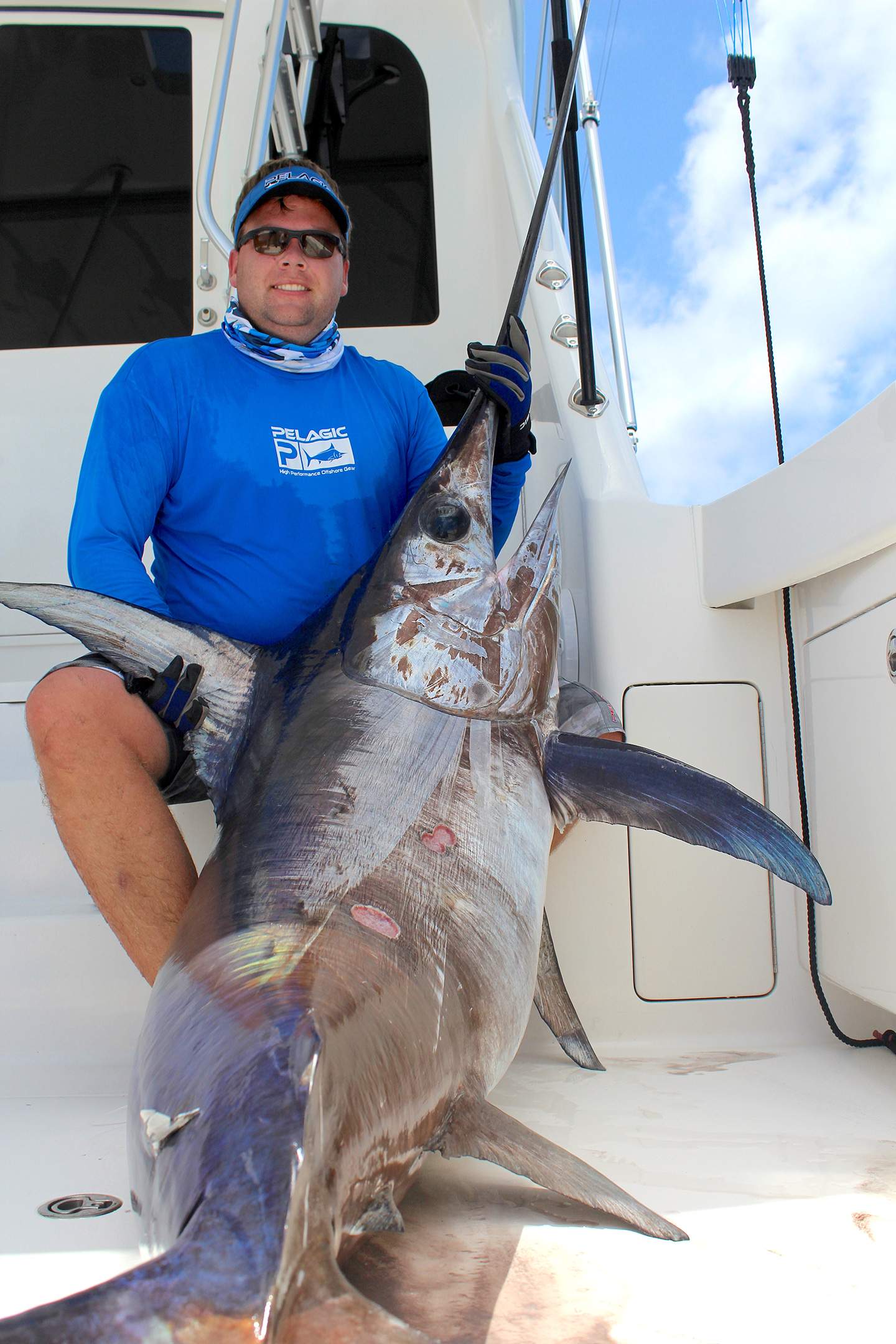 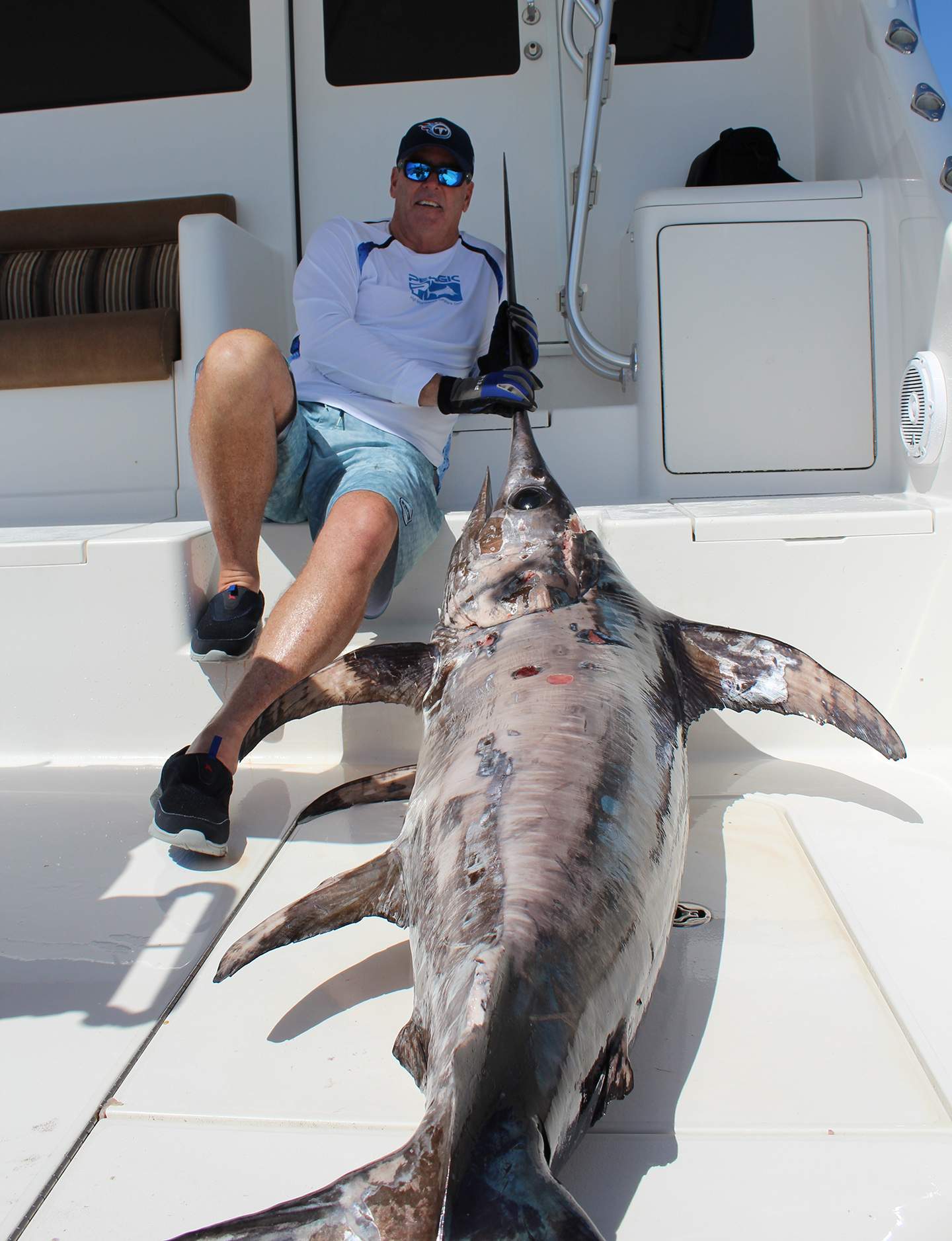 Great shot of a skyrocketing swordfish right off the transom. 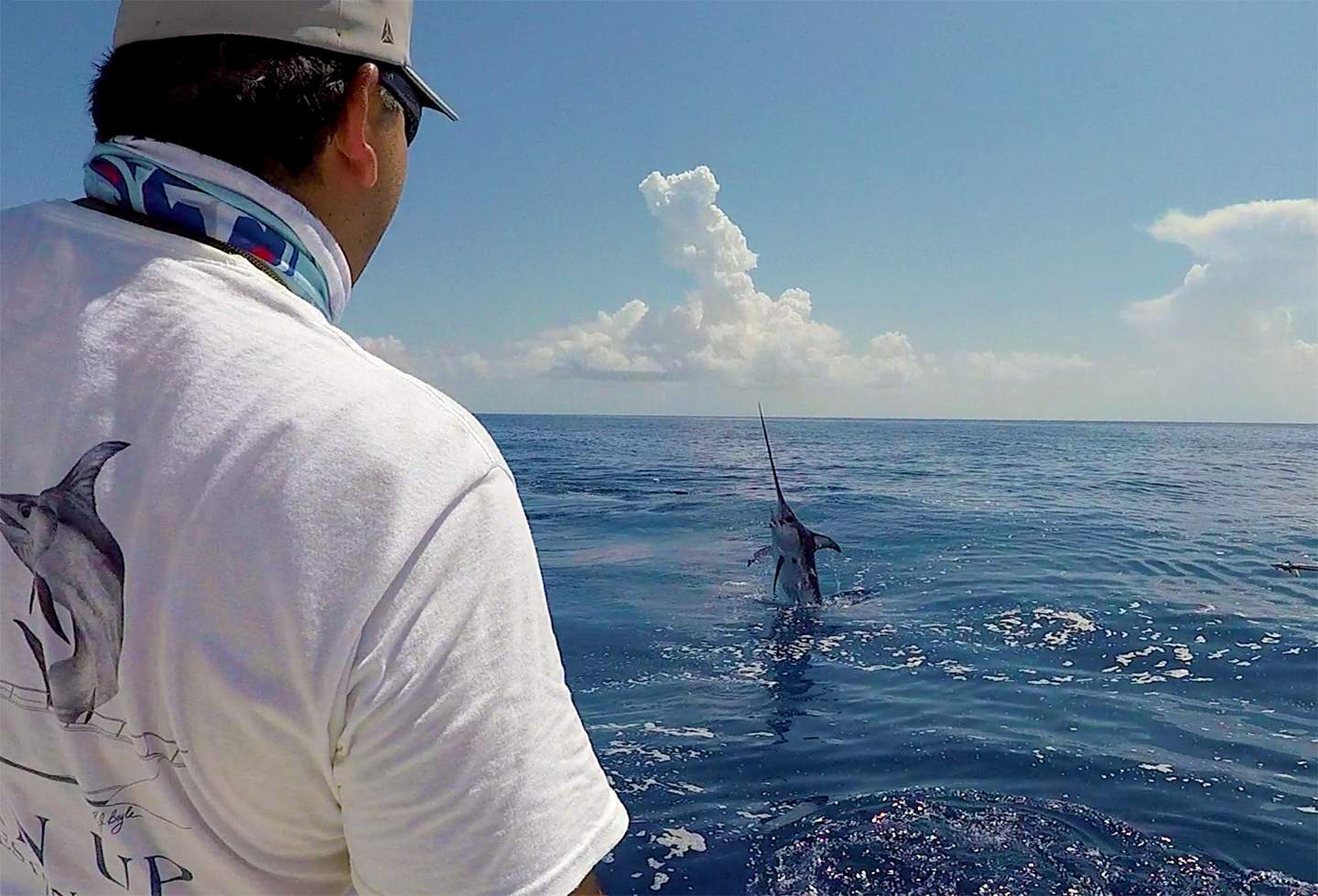 Wrapping up the hot Texas summer we look forward to fishing through the winter and seeing bigger and more plentiful swords as the water temperatures begin to finally drop. We also look forward to the end of this catastrophic hurricane season as so many families and friends close to us have been affected in Texas, Florida and the Carribean. I want to give a HUGE thank you to the PELAGIC family, Mrs. Amy and the TITAN UP family and so many others for their contributions to the Houston Big Game Fishing Club’s Sportfishing and Marine Industry Recovery Fund and also the Houston Flood Relief Fund.