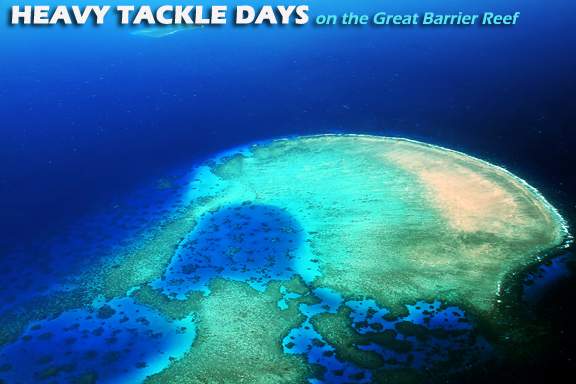 The Cairns Heavy Tackle Marlin season runs every year from late September to early December as the giant black marlin congregate in the warm waters of the Great Barrier Reef in far North Queensland, Australia. The giant females (up to and over 13 foot long and more than 1000lbs) come here from all over the pacific, attracting in the process smaller male fish (up to 350lb) and the keenest of local and international anglers.

This Cairns aggregation is one of just a few locations around the world where giant black marlin are known to be present in numbers. And since the charter industry was established here in the early 1970’s, more big black marlin have been caught in this area of the Australian coast than anywhere else in the world. 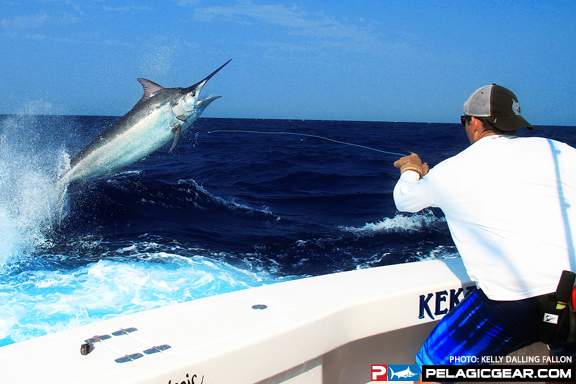 These days, the professional marlin charter fleet numbers close to 30 boats, many of whom operate out of this area of the country for only these two-three months each year. Most trips on the reef run between a 4-10 days live-aboard duration, with guests joining the boats in Cairns, Cooktown and Lizard Island. 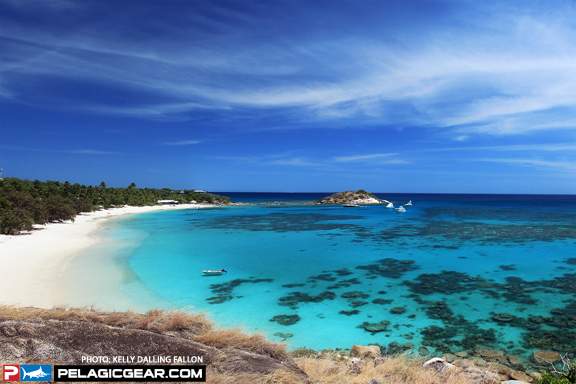 In most cases the exact departure and return location will remain flexible giving the captains the best chance to put their guests on the fish as the main body moves up and down the reef at different times of the season. Mothershipping is also an option as are day trips out of Cairns at the very start and end of the season.

Below: View from above - the ribbons of The Great Barrier Reef 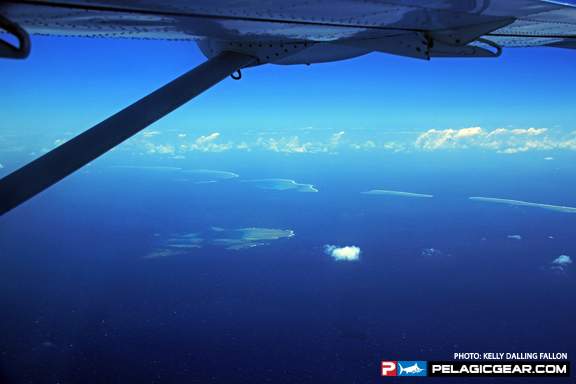 The reef itself is a spectacular playground – it offers a safe and calm overnight anchorage. We fish the drop off near hard edge of the reef and quite often, the evening’s anchorage is literally minutes from where you are fishing. That means we can fish until quite late in the day (dusk), to enjoy the best fishing.

Below: Coral Trout - one of the many species encountered while fishing on the reef 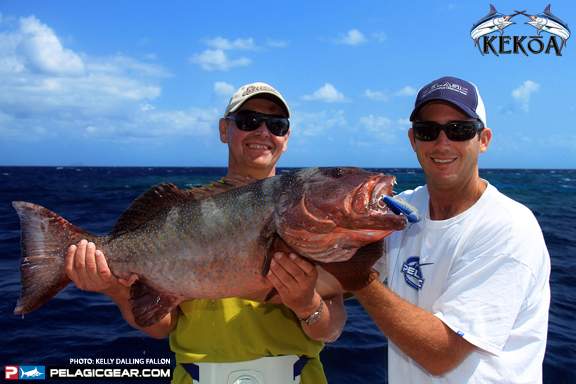 In the morning, before ‘start fishing’, the options are endless. A typical day on the reef might start with a snorkel/spear fish in the shallows in the protection behind the reef—don’t forget, the Great Barrier Reef is one of the Seven Natural Wonders of the World.

Below: It's not always about the marlin - snorkeling is one of many activities available in pre-fishing hours. 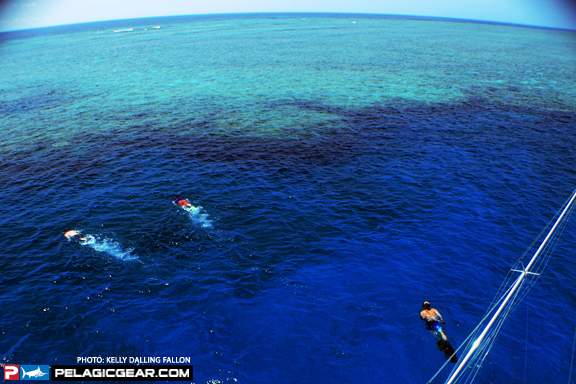 Some of the spots along the reef are internationally renowned dive spot—for example, the “Cod Hole” at Number 10 Ribbon, is one of the most famous and most spectacular for fish species. 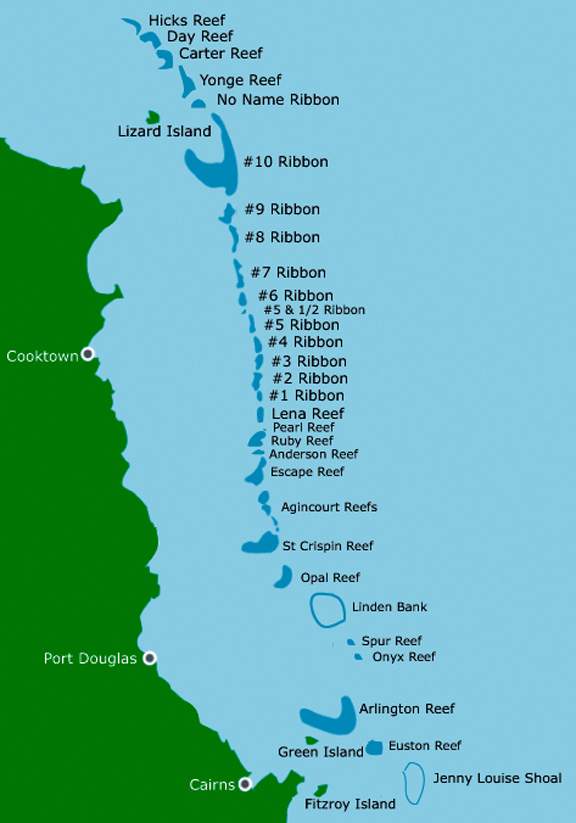 Then after a swim, perhaps some trolling for Pelagic species for bait and fish for the dinner table, or throwing poppers on the reef edge for GTs (giant trevally) or jigging for dogtooth tuna--just some of the options available.

Below: Giant Trevally and Yellowfin Tuna - common catches while fishing the reef or trolling for bait. 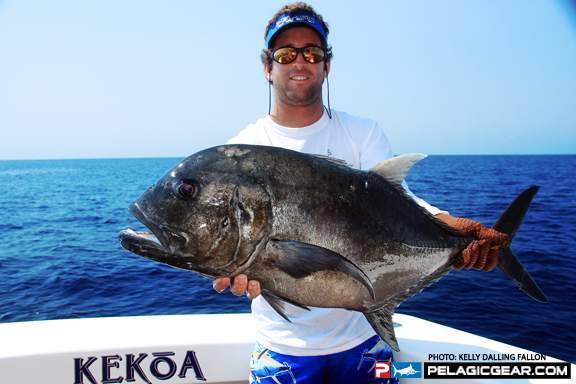 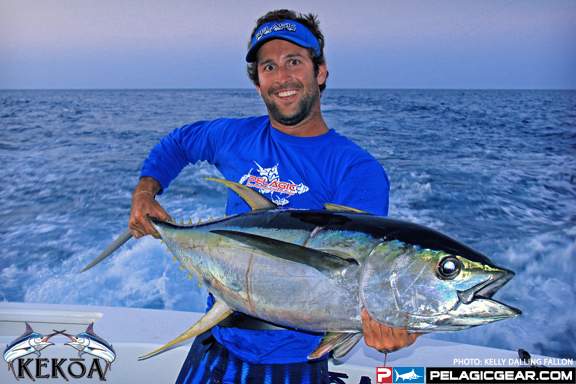 The marlin keep gentleman’s hours and most boats don’t start the marlin fishing until close to 11am daily where trolling with dead-baits is the preferred option. A skipping “Scaley” mackeral or tuna or two as well as swimming “Scad” (like a small American Spanish mackerel) are the most popular baits and to many the baits will seem a pretty grand catch themselves—a 20lb mackerel will make a good skip bait for a giant marlin. 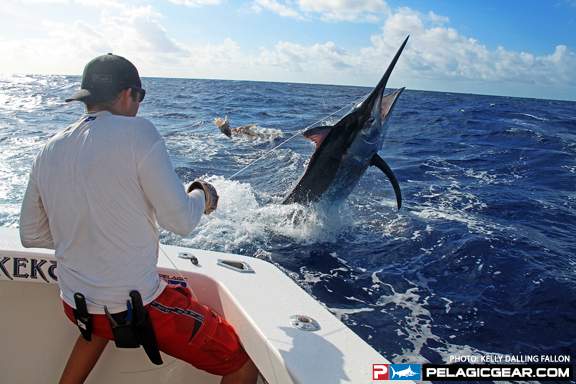 On this page, Kelly Fallon shares some of her action photos from the 2011 season on the reef on board KEKOA_** with her husband and Pelagic Pro Team Captain Luke Fallon. Luke grew up in North Queensland and has been fishing the Giant Black Marlin Season for over 25 years. He started out as a deckie (crewman/mate) at 16, and became one of the youngest skippers at only 21 years old just six years later. 25 years later again, he is considered one of the most experienced skippers amongst the fleet. KEKOA **_, is a 56” O’Brien Boat, and was locally built specifically for marlin fishing in these waters. She was launched in March, 2010.

Below: Another big black comes to leader; great shot of a "greyhounding" black marlin. 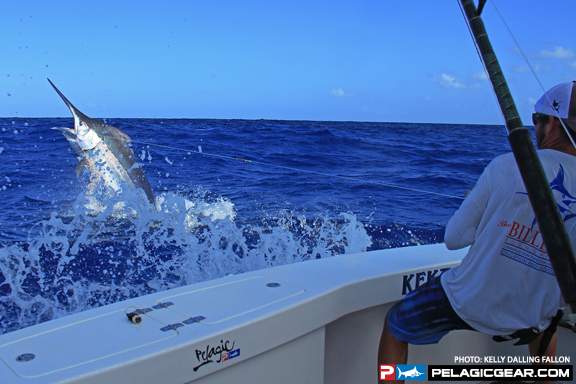 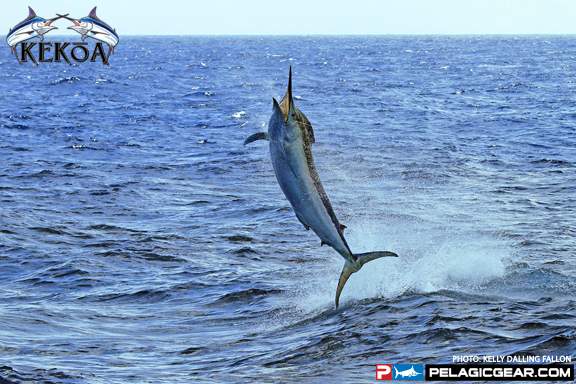 2011 was another great season on the reef with over 20 grander class marlin recorded from amongst the fleet. For the team on board KEKOA , 2011 was one of our best seasons in many years with just shy of 80 heavy tackle marlin released for the season including 2 fish over 1000lb and several more giant blacks pretty darn close to the magic number! 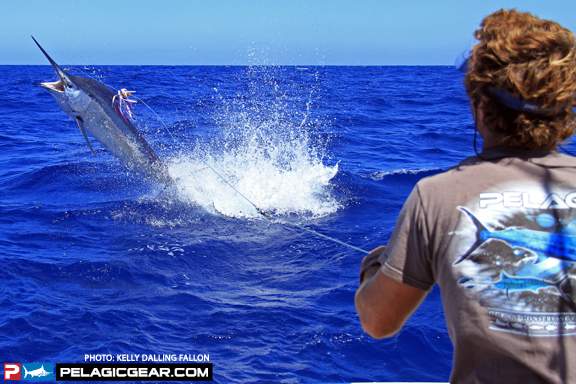 About the author
Kelly Dalling Fallon, Luke’s wife, has likewise grown up on the waters of far North Queensland and spent several season on board Reel Chase with her father Capt. Jim Dalling until his retirement in 2009. These days she spends the full year on board _** KEKOA**_ alongside Captain Luke. Kelly is also the owner/author of the Black Marlin Fishing Blog and also contributes articles and photos to several Australian fishing magazines on a regular basis.