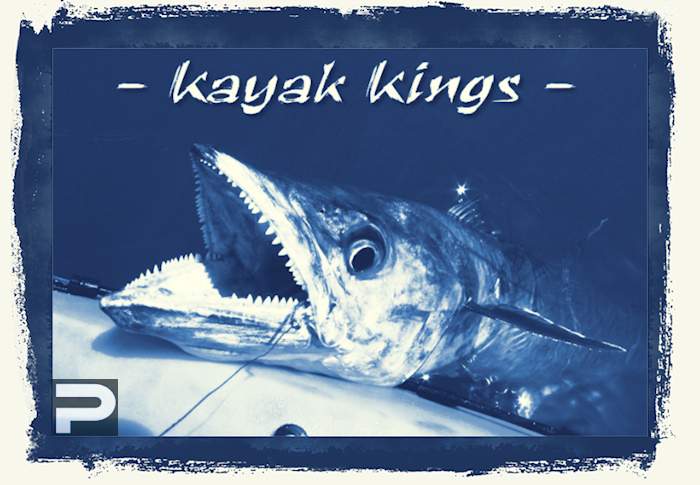 Anglers prove that you don't need an expensive boat to catch quality fish in the Gulf of Mexico !

Summer months along Florida, Louisanna, and Texas provide for calm winds along the coast. Warm water temps help fuel the feeding and activity of gamefish such as King Mackerel, Cobia, and Tarpon. On certain days you can go out and specifically target a species you like. Due to the Kayak Revolution, there are more and more anglers taking advantage of this inshore activity by means of Kayak Fishing.

Below: Currents from warm Caribbean waters feed into the Gulf, bringing in many predatory fish that can be taken by a kayak.. 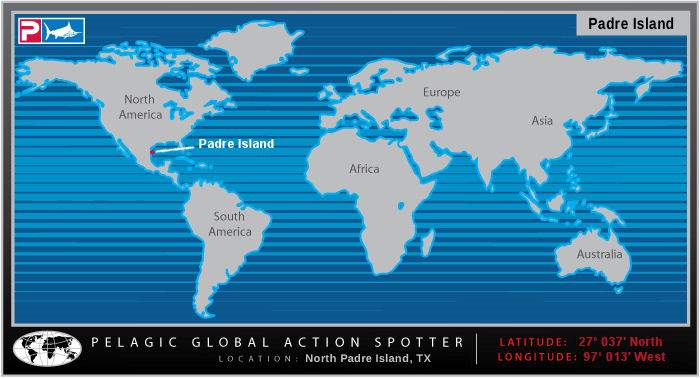 Kayak Fishing for Kings and other Gamefish !

The sport of Kayak fishing as heavily grown over the past few years. More and more anglers are taking advantage of getting out on the water without having to dish out the high expenses for fuel. Anglers from the kayak are more able to sneak up on cautious fish as well. For this quick look into summer kayak fishing, we venture to the coastal waters off South Texas. Here, the calming of summer brings clear water, and multitudes of bait to various inshore locations. King Mackerel have been caught here as close as the beach itself. However, one of the more productive methods to find these fish is to hop in the yak and journey out a mile or two chasing flocks of feeding birds over bait, which is getting blasted underneath by predators.

Below: A Kayak is rigged for the on-the-fly chase of birds and bait 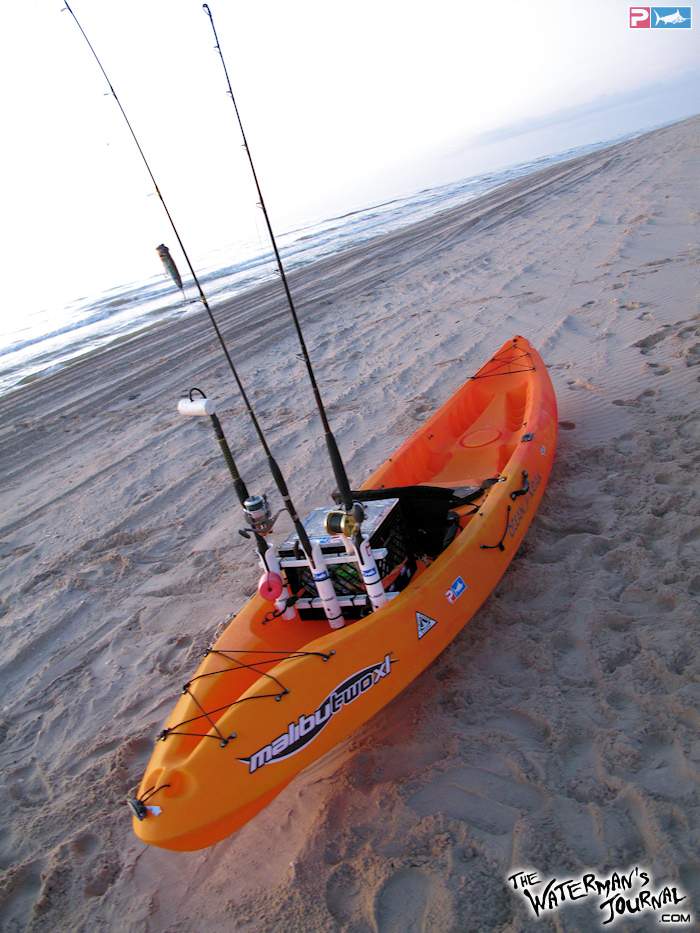 Upon arriving at a location filled with activity, it is well worth it to throw out a Top-Water lure. These topwaters drive Mackerel and other larger fish crazy, just be sure to use a small trace of wire to help with the vicious teeth. Also, don't be surprised if these silver missles blow out of the water breaching at high altitudes putting on a magnificent aerial show.

Below: An average King Mackerel is landed and released. This fish fell prey to a large top-water lure. 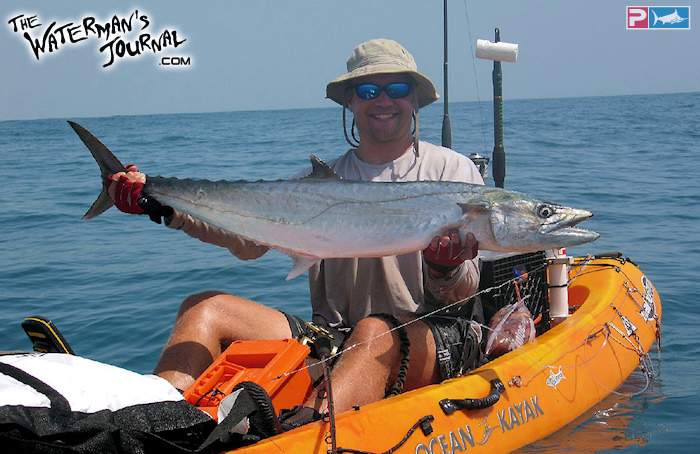 Below: A baitball gets destroyed by Jack Crevalle and Spanish Mackerel. 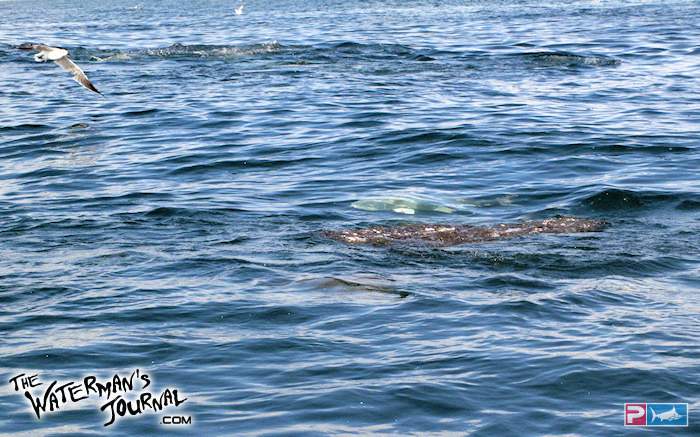 Duing these mass feeding frenzies, you always have the chance at one of several different predators, and you may not know which until the fish actually hits. Often, you can throw into a mix of bait like so and as soon as your lure hits the water, it gets demolished. Jacks are excellent pack hunters and can desimate a bait population very quickly.

Below: A decent Jack Crevalle beat a Mackerel to the punch and sucked down a topwater split seconds after hitting the water 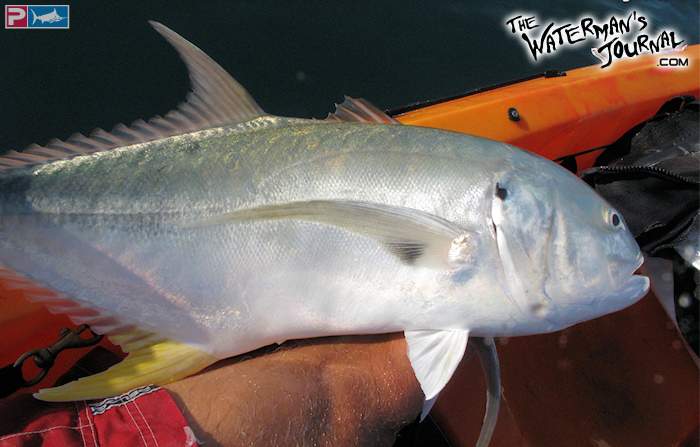 Some times the predators can be so vast in volume, you have sit back and analyze the situation first hand to see if you can target a particular or quality fish roaming on the outskirts of the activity.

Below: Another King Mackerel falls prey to a top-water. 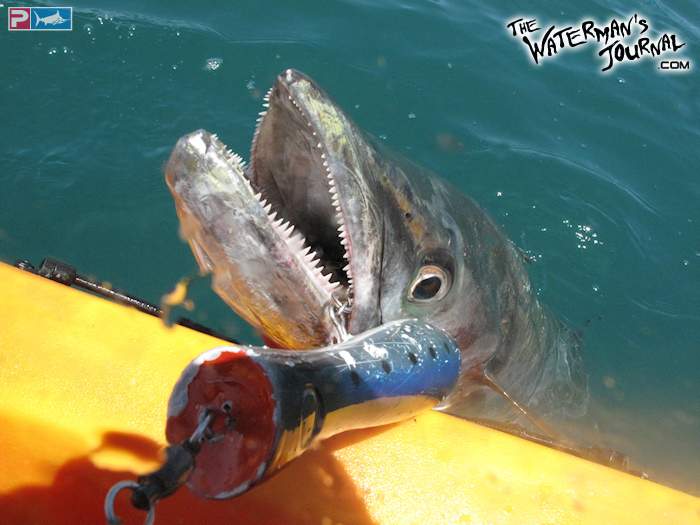 While you do not need any electronics on board of the kayak, at times it does help to have a fishfinder to detect bait down deep. If you track the activity more than likely they will rise up to the surface where the next possible frenzy may happen.

Below: Another King is quickly landed and released. 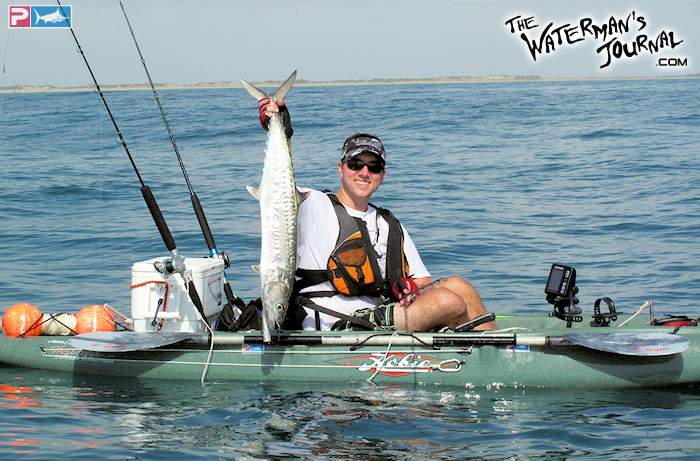 While top-water lures may be one of the more exciting and adrenaline pumped ways to catch these Kings, there is even a more productive way. Ribbonfish (or Atlantic Cutlass fish) are one of the Mackerel's favorite treats. Nearly every troll or drift with a well presented Ribbonfish will likely get blasted if the Kings are indeed around.

Below: A Kingfish sucks down a Ribbonfish and is battled to the kayak. 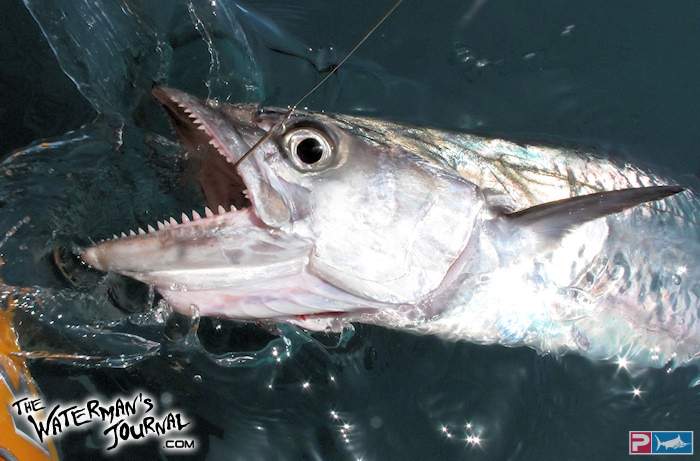 Fish like Mackerel and Jackfish have a very high metabolism. This essentially means they need to continually eat to replenish their energy. It is not uncommon to have schools of these fish blow up and destroy acres of bait during the middle of the day with sun directly overhead.

Below: A great display of Predators and Prey. 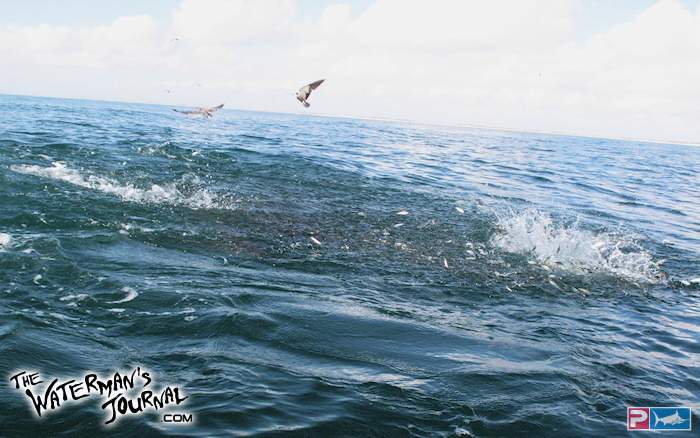 Due to chaotic activity on the surface, many other species like Sharks, Cobia, and Tarpon will often fin their way and take part in the feeding..

Below: A couple of Cobia swim by and inspect the activity. 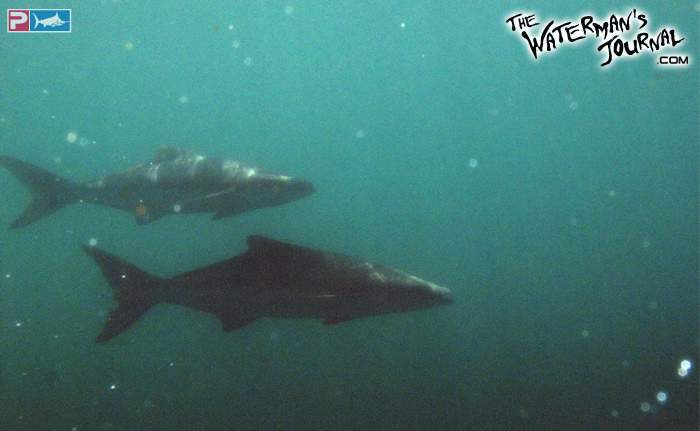 These feedings will last as long as the food source remains or until the fish are full. A large group of gamefish can destroy these pods of bait in minutes. If this happens, keep on fishing. The fish are still around.

Below: A larger King Mackerel falls prey to a top-water once again. 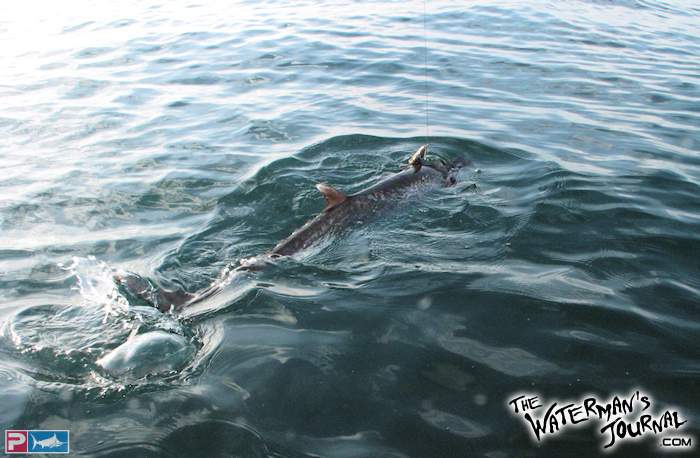 IF you plan to harvest these Mackere, be sure to tire them out before handling them or sticking them with the gaff. These Kings have some of the most impressive teeth designed solely of cutting away at a food source. Safety is always an issue on the water and an accident offshore in the kayak could end very badly. It is best to just take your time with your tackle, and more importantly your fish.

Below: About to release another quality Mackerel... 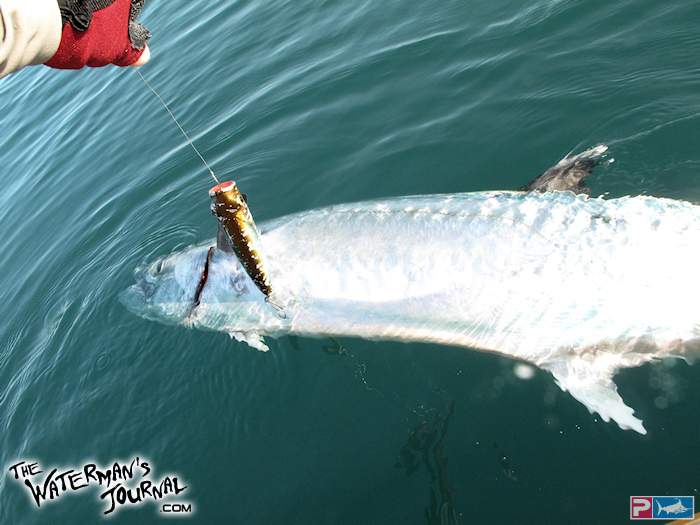 One thing you do need to be aware of is the fact that these feedings do infact attract sharks. The majority of the sharks are Bulls and Blacktips 6' or less and couldn't care less about an angler. They are dead set on the bait in the water. It is important to remain calm and not freak out if/when you do see these sharks.

Below: A feeding Blacktip Shark slices the surface of the water picking up anchovies in its open mouth. 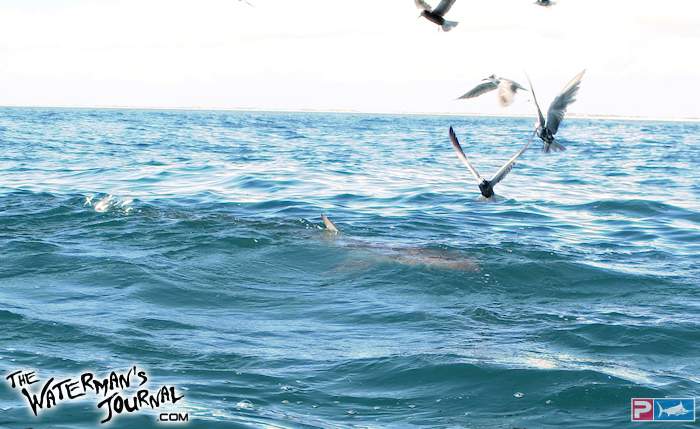 Sharks underneath the kayak can be a very intimidating experience, but also a true display of nature's raw beauty right in front of you. You are in their realm and their world when on the water.

Below: Another Blacktip Shark cruises underneath the kayak. 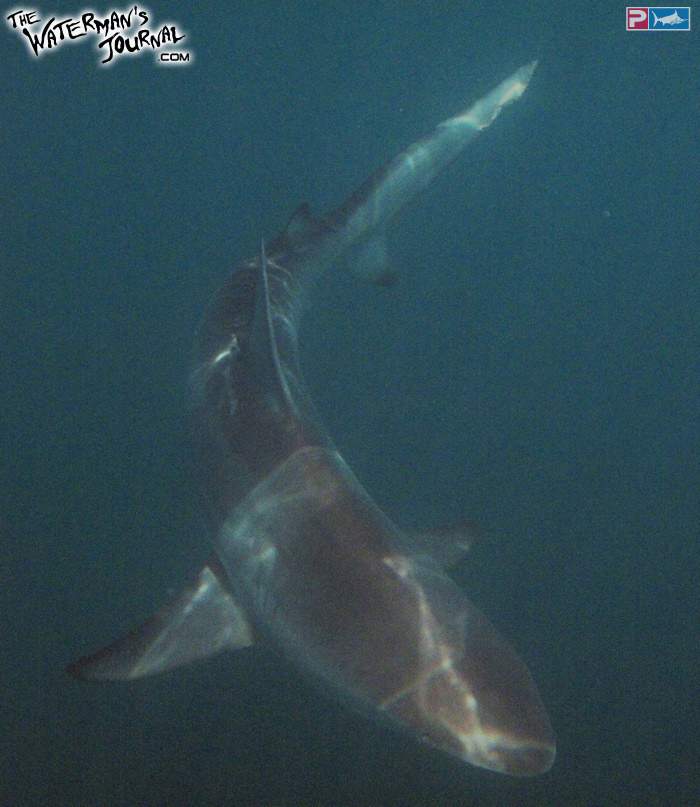 Summertime feedings may last all day, from sunrise to sunset. The bite will be sporadic but nonetheless keeping an eye on everything and waiting for the next bit of surface activity can prove to bring you your quality fish of the trip.

Below: This smoker King is subdued and brought to the kayak. The fish was photographed before being sent back on her way. 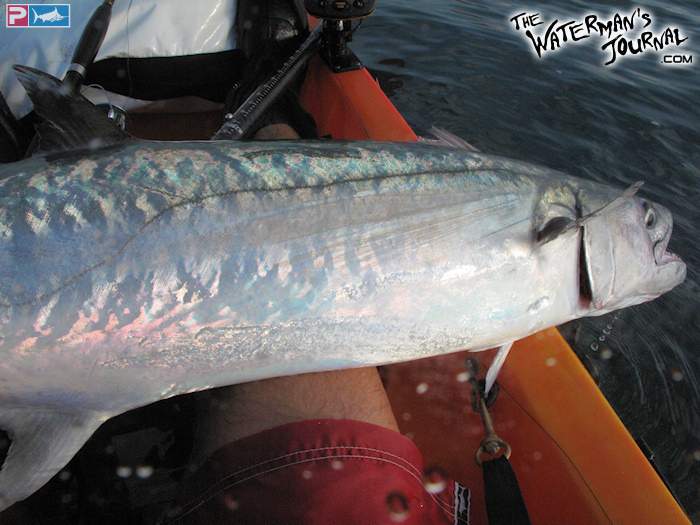 Kayak fishing can be a blast any way you look at it. If you cover ever safety aspect properly, chances are you will have a good trip. And if you find the fish and convert it into a productive outting, then it is all worth it.

Have fun, be safe, and go on for the ride of your life!

Check back with the Waterman's Journal for more Killer Kayaking Reports from Around the World.

For more information about Texas fishing and previous TX Kayaking Reports , click the banner below