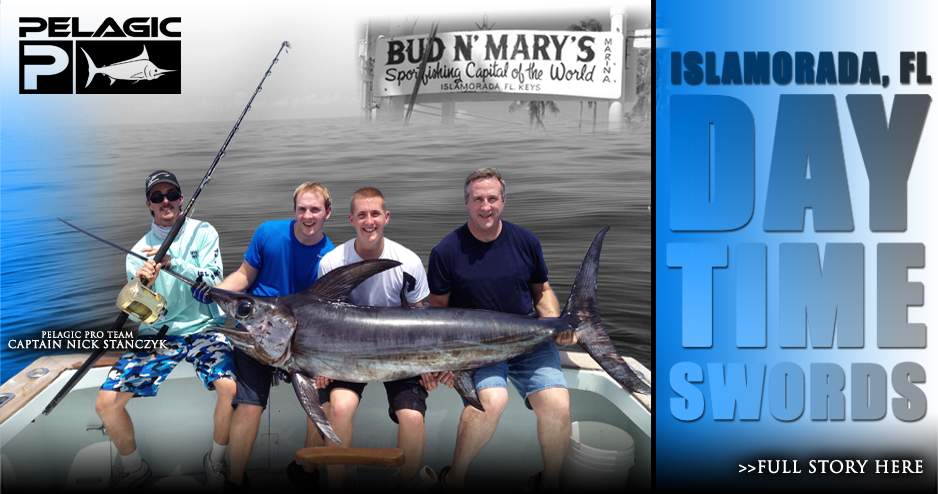 Daytime Swordfishing is a relatively new concept in the sport fishing industry. Discovered in 2002 off the Florida coast, Pelagic Pro Team Captain Nick Stanczyk, along with his father and uncle, Captains Richard and Scott Stanczyk, have perfected this technique over the past decade or so. Their stamp on this unique fishery has been made as several articles and TV shows have been published featuring their proven daytime Swordfishing system. Based out of the famed Bud N' Mary's Marina in Islamorada, FL, most of the fish caught come from the deep water trenches offshore from the Florida Keys. Capt. Nick runs his 34' Crusader _B n' M, _and as one of the best in the business, we highly recommend getting in touch with the Stanczyk family to catch your fish of a lifetime. Here are a few recent excepts we put together for Capt. Nick:

"Master daytime swordfisherman and Pelagic Pro Team Captain, Nick Stanczyk, is at it again putting his clients in line to catch a fish of a lifetime. Based out of the famous Bud 'n Mary's Marina in Islamorada, FL, and fishing on his boat BnM , Capt. Nick first put 71-year-old Rolf on three swords, one of which went 173 lbs. Stanczyk next put more lucky clients on a 183 lb. swordie, this one come in flat calm conditions off the shelf of the Florida Keys."

Below: Capt. Nick Stanczyk and Rolf with his 173-pound Swordfish // Happy clients pose with their 183 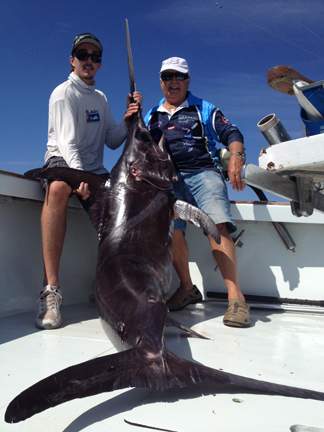 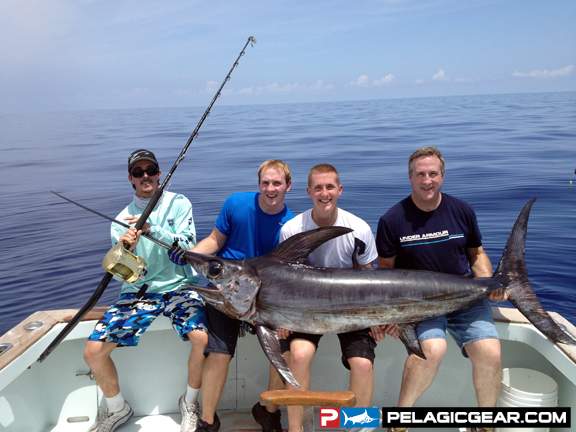 "It’s no secret any more – fishing for Swordfish in broad daylight is proven to be just as, if not more productive than fishing in the dead of night. Pelagic Pro Team Captain Nick Stanczyk, along with his father and uncle, pioneered the sport of daytime swordfishing.

Earlier this week, Capt. Nick hooked a monster just 30-miles offshore from Islamorada in the Florida Keys. The angler, John, who just retired from the military, fought the beast for over five hours before finally boating the whopping 455-pound Broadbill Swordfish. This impressive catch dragged Capt. Nick’s_ B ‘n M_ some 11-miles during the course of the fight. This incredible fish is the biggest sword weighed-in at the famed Bud ‘N Mary’s Marina, and is likely right up there with the biggest ever caught on rod and reel in the Florida Keys." 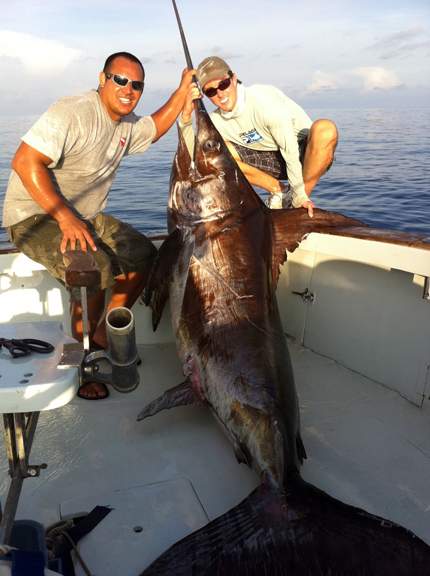 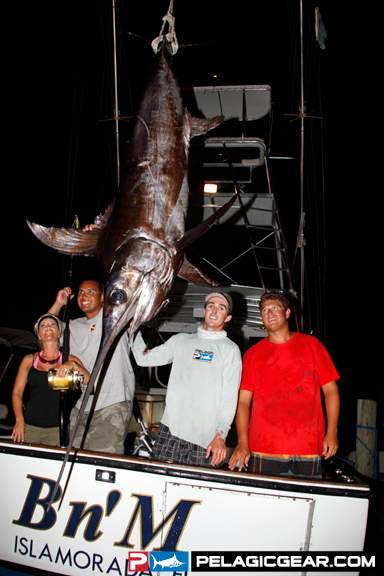 "Another daytime Swordfish came aboard the B ‘n M for Pelagic Pro Team Captain Nick Stanczyk and his lucky charter anglers this past weekend – this one a certified “double-marker” weighing in at 230-pounds. Captain Nick described the great fish as “a pumpkin, it had orange meat – should make for a sweet meal on the grill.” This charter also released a small “pup” sword to fight another day."

Below: Another solid 200+ lb. sword // A "pup" Sworfish ready for release - after a quick photo, of course 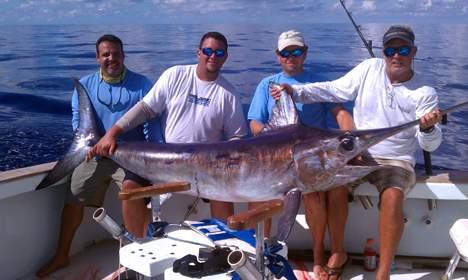 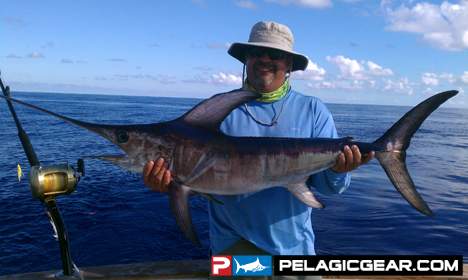 "The hot action on daytime Swordfish continues for Pelagic Pro Team Captain Nick Stanczyk and his charters. This past week, Capt. Nick’s report includes his own 280-pound fish and a 321-pounder caught by German angler, Jens Laub. All fish are caught on rod and reel aboard his 34’ Crusader, B ‘n M , fished in the deep-water canyons offshore from the famed Bud ‘N Mary’s Marina."

Below: Capt. Nick got his turn on the reel // Jens Laub was more than satisfied with his 321-pounder 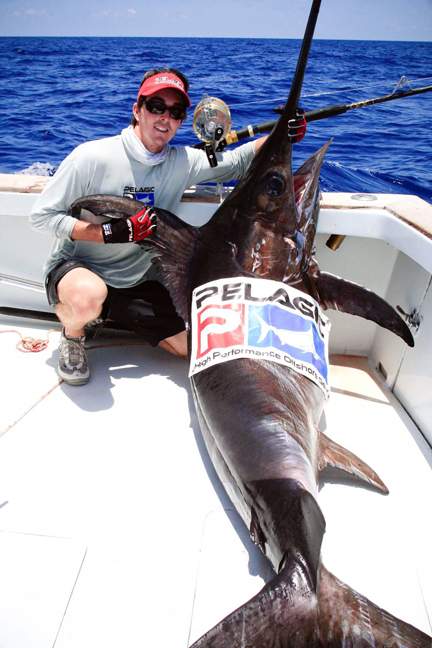 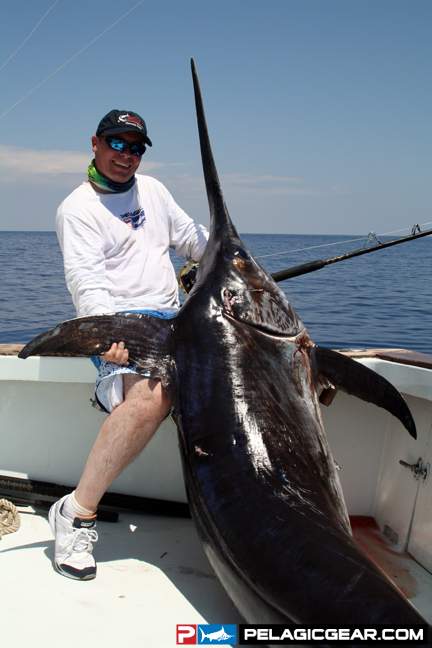 "The 'Swordies' are continuing to provide Pelagic Pro Team Captian, Nick Stanczyk, and his lucky anglers with incredible action on 200-400 lb. fish. Recent action shows Telby Turner of Texas with his 209 lb. Swordfish taken aboard Capt. Nick’s 34’ Crusader B n’ M . People travel from all over the world to experience this outstanding fishery which lies just miles outside the famed Bud ‘N Mary’s Marina."

Below: A broadbill ready for release // Check out the bill on Telby Turner's 209-pound swordfish 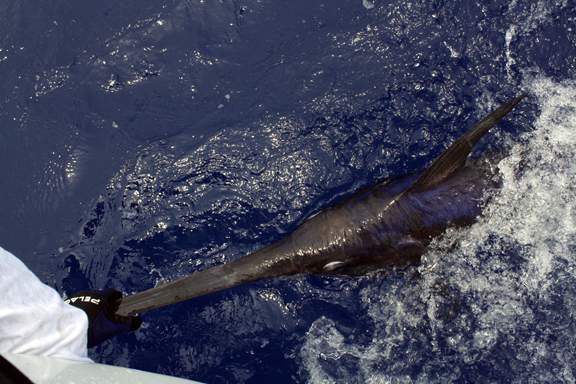 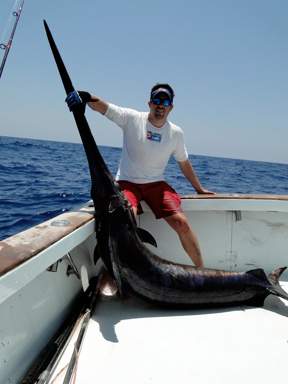 To fish with Capt. Nick Stanczyk or to learn more about this incredible fishery, visit: www.floridakeysswordfishing.com