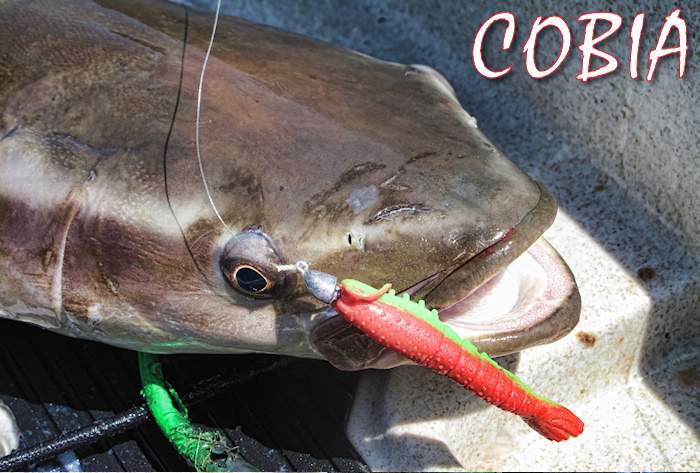 Each year, the Cobia migration attracts many anglers throughout the Gulf of Mexico and Atlantic coast of Florida. They are very powerful fish and have known to take just about any bait presented. Anglers can lure them with live crab, mullet, hardhead catfish, ribbonfish, cut bait, and a variety of artificials. When caught deep, they are often a pleasant surprise to an angler, for the table fare is exceptional. Cobia are a respectable and very fun game fish to come in contact with.

Below : A Cobia is landed on artificial/jig. 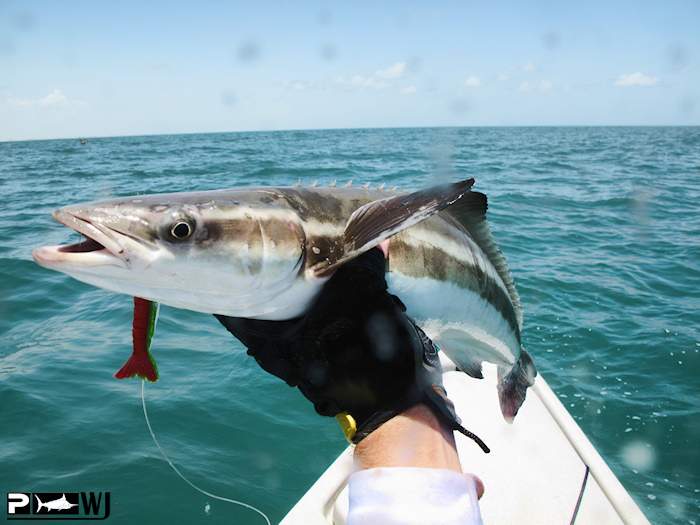 Attaining a maximum length of around 6' and maximum weight 150lbs , cobia have elongate fusiform (spindle shaped) bodies and broad, flattened heads. Their eyes are small and their lower jaw projects slightly past the upper jaw. On the jaws, tongue and roof of the mouth are bands of villiform (fibrous) teeth. Their bodies are smooth with small scales, their dark brown coloration grading to white on the belly with two darker brown horizontal bands on the flanks. These may not be prominent except during spawning when cobia lighten in colour and adopt a more prominently striped pattern. The large pectoral fins are normally carried horizontally, so that, as seen in the water they may be mistaken for a small shark. When boated, the horizontal pectoral fins enable the cobia to remain upright so that their vigorous thrashing can make them a hazard. The first dorsal fin is composed of six to nine independent, short, stout, and sharp spines. The family name Rachycentridae , from the Greek words rhachis meaning "spine" and kentron meaning "sting," is an allusion to these dorsal spines. Mature cobia have forked, slightly lunate tail fins with most fins being a dark brown. They lack air bladders .

Below : A Cobia is hooked on the surface via live bait... 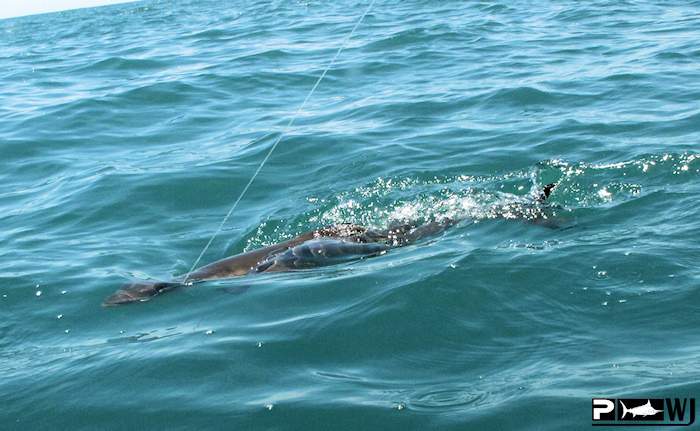 Cobia feed primarily on crabs, squid, and other fish. Cobia will follow larger animals such as sharks, turtles and manta rays in hope of scavenging a meal. Cobia are intensely curious fish and show no fear of boats and are known to follow other caught fish up to a boat and linger to see the action. Their predators are not well documented, but the dolphinfish ( Coryphaena hippurus ) is known to feed on immature Cobia. Shortfin mako sharks are known to feed on adult Cobia and have been seen by fishermen following Cobia during their annual springtime migration in the northern Gulf of Mexico.

Below : A large Cobia is landed from the kayak... 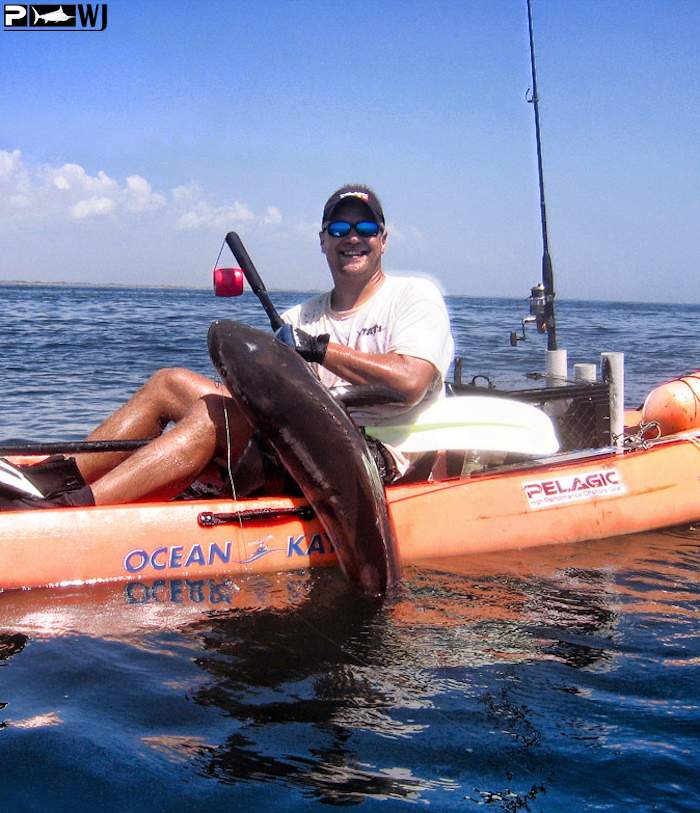 Below : Another beautiful Cobia is landed and released from the kayak... 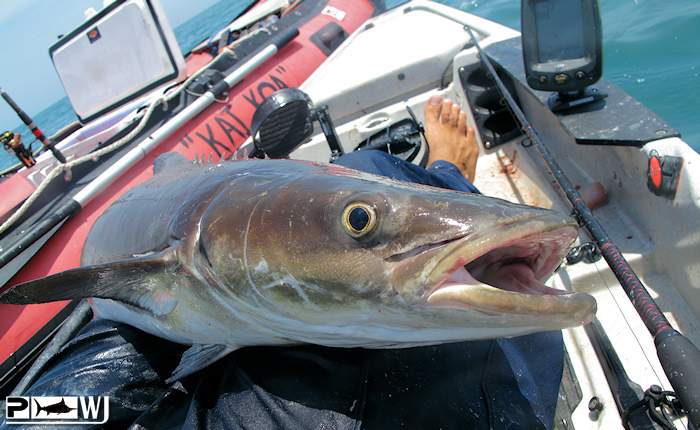 Cobia are pelagic spawners; that is, they release many tiny (1.2 mm) buoyant eggs into the water which become part of the plankton. The eggs float freely with the currents until hatching. The larvae are also planktonic, being more or less helpless during their first week until the eyes and mouths develop. Males mature at two years and females at three years. Both sexes lead moderately long lives of 15 years or more. Spawning takes place diurnally from April to September in large offshore congregations. Up to 20 individual spawns may take place in one season, with intervals of about one to two weeks.

Below : Cobia can often be found 'escorting' manta rays and whale sharks 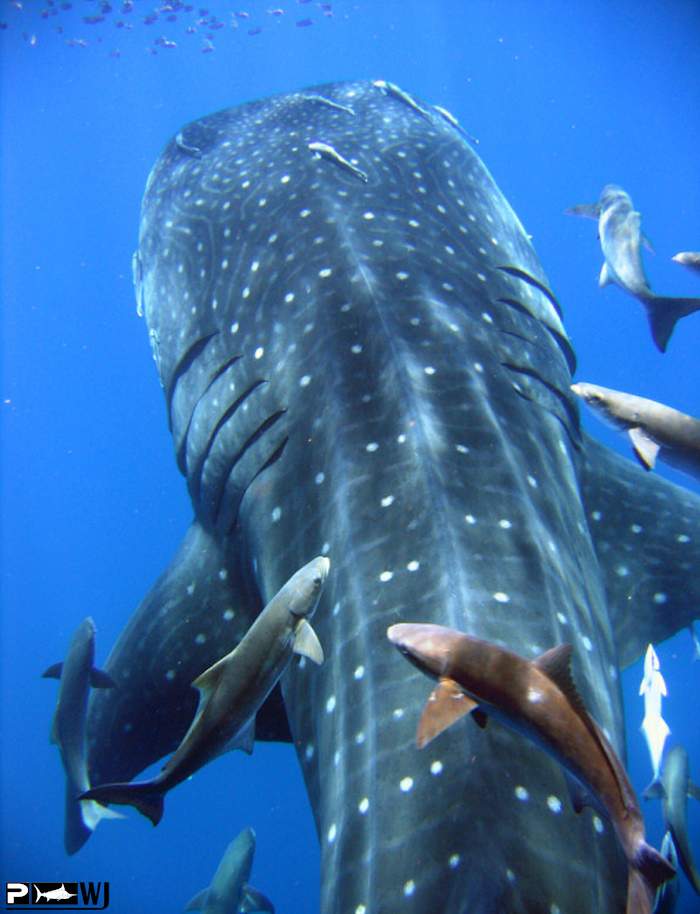 Cobia are sold commercially, and command a high price for their firm texture and excellent flavor. However, there is no directed fishery owing to their solitary nature. They have been farmed in aquaculture for this reason. The meat is usually sold fresh. They are typically served in the form of grilled or poached fillets. While great table fare, it is always good to practice and promote catch and release of this fish as to protect stocks for future generations to enjoy.