Circle Hooks: What You Need to Know 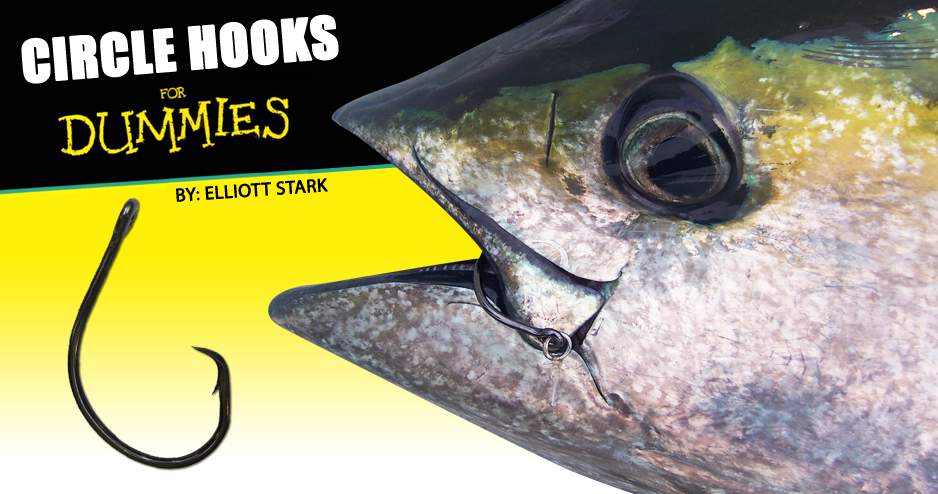 Circle Hooks For Dummies — What You Need to Know...
by Elliott Stark, Pelagic Pro Team Conservationist

What’s the difference between a healthily-released 500 pound blue marlin and a quarter-ton mud dart? When you have old "stick nose" switching from a teaser to something with a hook in it, what makes the difference between curses of excitement followed by the squeal of drag, versus that hollow, kicked-in-the-nuts-type feeling that happens when the fish eats, but you practice release before catch? The answer to both questions relates to the hook. Hook placement and hook up ratio are two things of central importance to blue water fishing success. Both of these things can be directly improved by the use of circle hooks. More fish caught, more fish released in good condition… how can you go wrong?

A circle hook is defined as a hook whose point is perpendicular with its shaft. J hooks are designed with points that are parallel to the shaft. The formation of a J hook is meant to snag whatever tissue it encounters first. If you are live baiting for fish that requires a bit of a drop back, such as tuna and marlin, setting the hook can result in run-ins with the throat, stomach or gills. This is intuitive, after all, when a fish eats a bait, it is not doing so with the intent of gumming it to death. The fish is trying to get the bait inside of itself. In order to do that, the bait must first be swallowed.

Below: Note the perpendicular point of the circle hook (left) versus the point that is parallel to the shaft of the J-Hook 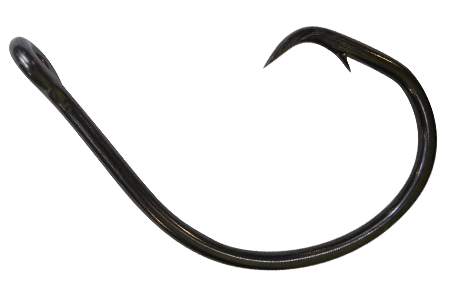 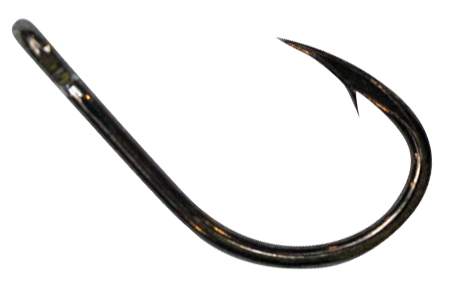 The form of the circle hook is such that when the bait is inhaled, the point of the hook is shielded from contact with internal tissue by the curvature of its end. The fish is given the appropriate drop back to ingest the bait and the reel is thrown into gear. At this point in the process the bait along with the hook are in the fish’s mouth. When the line comes tight, the leader and the hook are pulled toward the boat. This drags the hook out of the fish’s mouth, at which point the hook rotates into the corner of the fish’s jaw, where it is secured. The angler then reels until the fish starts taking drag and the fish is hooked.

Below: The circle hooks worked perfectly, as you can see, they have settled themselves nicely in the corners of the two beauty blue (left) and black marlin 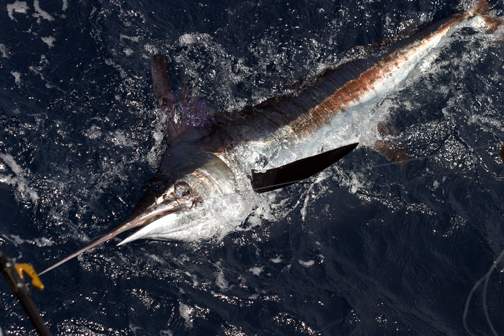 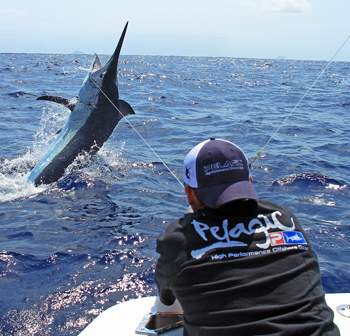 For an illustration of how it works, take a leader with a circle hook and grab it six inches up the line from the hook. Take the line with the hook laying against the inside of your wrist. With your other hand, pull the line, drawing the leader through the crease that is formed where your thumb meets your hand. As the hook is drawn up your wrist and hand the curve prevents it from engaging. As the hook comes to the web of skin between your thumb and index finger, the point encounters the inside of your hand, with the gap of the hook and its shaft on the outside. The point of the hook then rotates and works itself into position. The crease of your hand has become the corner of the fish’s jaw. It’s like some type of geometry that actually has a real world application.

Below: A quick demonstration is all it takes to understand the dynamic of how a circle hook works; note how the hook in the second and third images has started to position its way into the palm of the hand, or in the case of a fish, the corner of its mouth 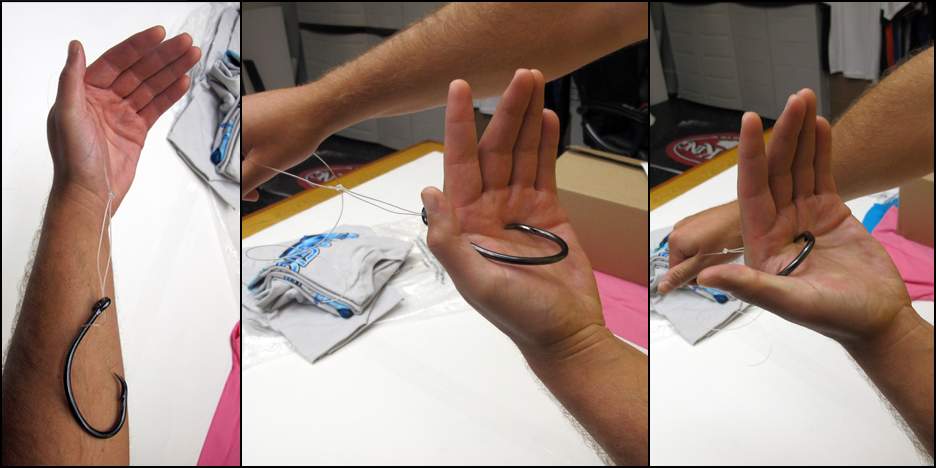 For proof of the benefits of circle hooks, you can research scientific literature or look to the cockpits of some of sportfishing’s best. In the United States anglers are obligated by law to use circle hooks when using bait to target billfish. This law was established for the conservation benefits for the fish. Some of the best captains in the world exclusively use circle hooks. Their reasoning, in addition to conservation, they catch more fish.

Below: This Sail and Roosterfish (caught by the author) benefited from the use of circle hooks as these fish were released cleanly and unharmed, after a few quick photos, of course 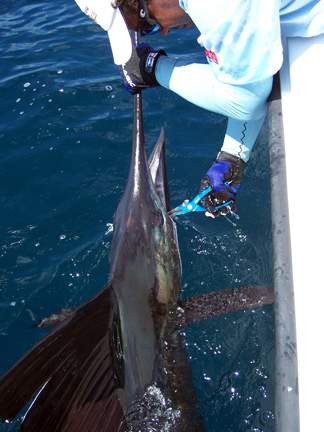 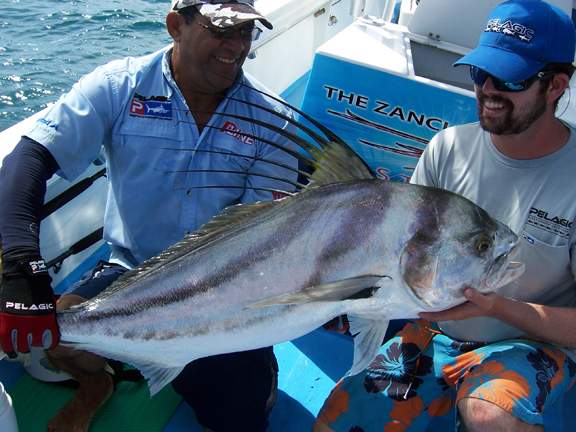 A 2002 study by the United States National Marine Fisheries Service quantifies this assertion. The study was performed in Guatemala targeting Pacific sailfish and blue marlin. Of fish caught on circle hooks, 85% were hooked in the corner of the mouth. Fish caught on J hooks were hooked in the corner of the jaw 27% of the time. Circle hook-caught fish were hooked deep (in the throat, back of the mouth, or gills) only two percent of the time--- 46% of the time with J hooks. J hooks resulted in hook-relating bleeding at a rate 20 times higher than with circle hooks. The study, utilizing the same captains and anglers, reported that hook-up rates with circle hooks were 1.83 times higher than with j hooks. Fish were also less likely to come unstuck once hooked.

Below: Whether releasing Giant Bluefin Tuna or boating a delicious Dorado for the dinner table, the use of circle hooks will simply increase your hook-up ratio after a fish has taken your bait 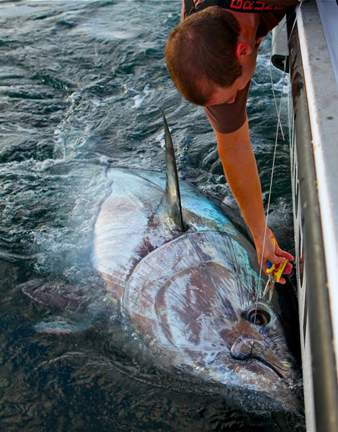 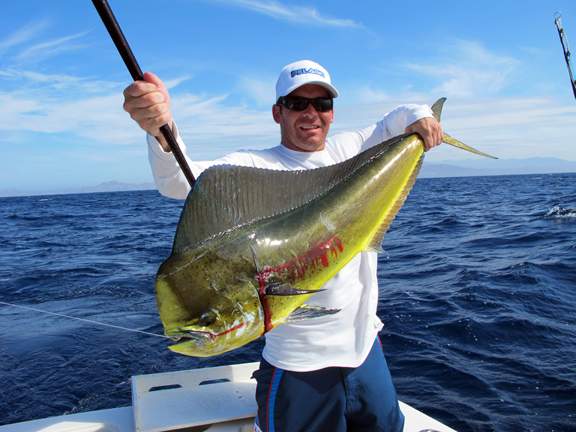 Why would fish be less likely to come unglued with a circle hook? Each of the 85% of fish that are hooked in the corner of the mouth on circle hooks are hooked in hard, bony tissue. Not only is this durable tissue anatomically designed to absorb shock—mashing bait fish and ramming into things while trying to eat them, it is also tough and does not easily tear. These characteristics make the corner of the jaw the perfect spot for securing a hook if your plan is to put a lot of heat on a fish, whether to boat it or to release it in good condition. Compare this with the tissue of the stomach, the throat, or the gills of a fish. In each case, not only are these biologically essential tissues not designed to withstand encounter with hooks, they are also soft and easily ripped.

Even if it is your goal to take a fish, a circle hook’s placement provides it with a much greater likelihood to be located in a place on the fish that can withstand prolonged pressure without tearing out. This is to say nothing of how much more confident you can be with a fish that is jumping at the boat when it has a circle hook hanging out its face.

Below: For tuna fishermen, circle hooks also present the advantage of keeping the eye of the hook and attached line outside of the fish' mouth where its teeth could fray the line and eventually cause failure - Colin Sarfeh's circle hook of choice here was a 7/0 Gamakatsu Ringed Super Nautilus HD 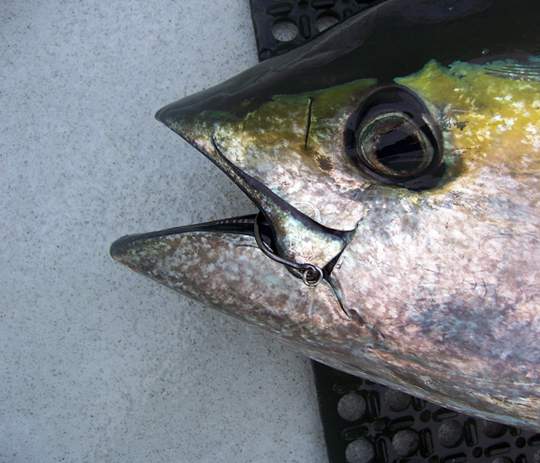 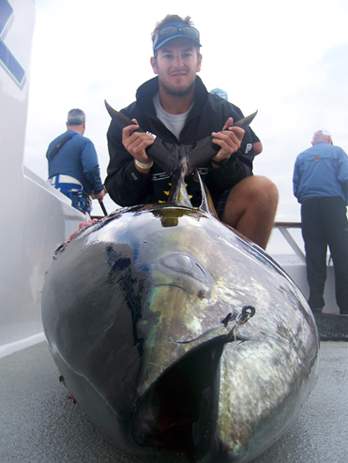 In short, circle hooks are a very interesting proposition. They not only catch more fish, but as importantly they prove that you can do something that is good for the ocean without being a hippie. Besides, in an age with high definition video cameras and super fancy digital photographers, nobody really likes to see pictures of big beautiful fish that come up gushing. That, and a 500 pound creature released healthily on its way to becoming a grander makes for a much better story than a mud dart.