One species of Tuna which is overshadowed by their big brothers the Bluefin and Yellowfin are the Bigeye Tuna . Found globally in just about all tropical and subtropical waters, Bigeye Tuna _(Thunnus obesus) _are highly prized as a gamefish and even more so for tablefare. Bigeye tuna vary up to 98 inches in length. Its maximum weight probably exceeds 400 pounds, with the all-tackle angling record standing at a very impressive 392 pounds. They are large, deep-bodied, streamlined fish with large heads and eyes. The pectoral fins of this tuna are very long, reaching back as far as the second dorsal fin.

Below : An illustration of a Bigeye Tuna 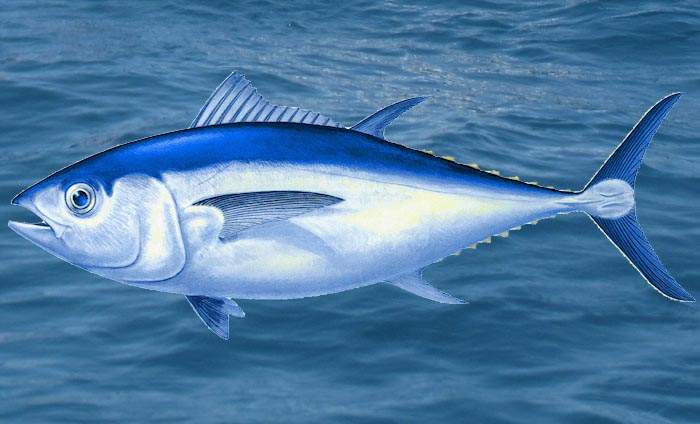 The vision of the Bigeye functions well in low light conditions and often hunt deep. Fishermen often hook into them when deep dropping heavy jigs. Like all tuna, the heart has an unusual ability to function effectively while foraging in cold subsurface water. Nonetheless, they must periodically return to warmer surface waters to warm up.

Longer-lived than the closely related yellowfin tuna, the bigeye has a lifespan of up to 12 years, with sexual maturity at age four. Spawning takes place in June and July in the northwestern tropical Atlantic, and in January and February in the Gulf of Guinea, which interestingly enough is the only known Atlantic nursery area.

Satellite tagging showed that bigeye tuna often spend prolonged periods diving deep below the surface during the daytime, sometimes reaching 1600'. Bigeye have been tracked entering water as cold as 41 °F . These movements are thought to be in response to vertical migrations of prey organisms in the deep scattering layer.

Below : A small Bigeye off Texas waters is brilliantly lit up... 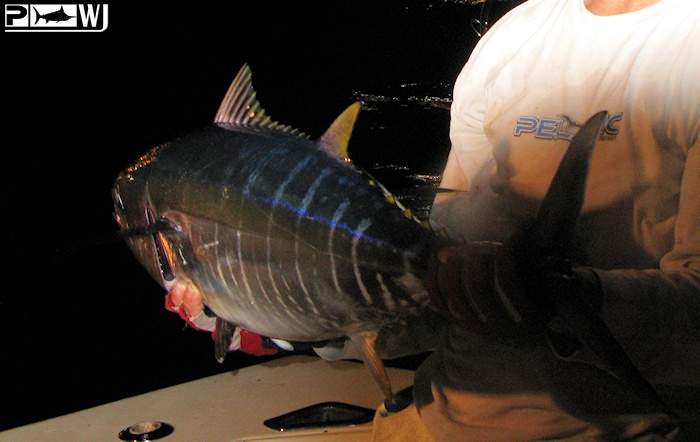 Bigeye tuna are amongst the tuna species most threatened by overfishing. Juvenile bigeye tuna associate closely with floating objects such as logs, buoys and other flotsam, which makes them susceptible to purse seine fishing in conjunction with man-made fish aggregation devices . The removal of large numbers of juvenile bigeye, before they reach breeding age, is a major concern to fisheries managers, scientists and sport fishermen. Most seafood sustainability guides encourage consumption of other types of tuna. Nonetheless Bigeye are also a highly sought after commodity in the sushi market.

Below : Capt Woody Woods and Capt Hunter Caberallos pose with a quality Bigeye out of Venice, LA. 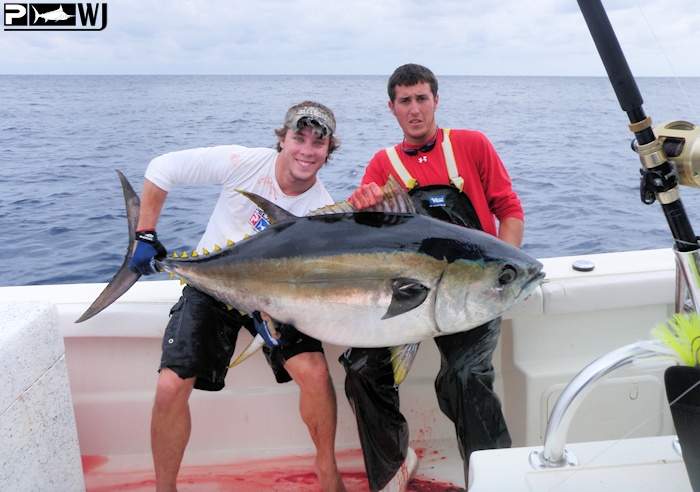 Anglers the world over will always have a facination with the hydro-dynamic torpedos known as Tuna. While the Tuna stocks around the world have been vastly depleted, there are currently more laws and regs being developed to help protect remaining stocks. Unfortunately not are they one of the most down right fun fish to battle, their true fault is their food quality which does and will always have a high demand regardless of the species of Tuna. For now, Bigeye's will stay near the top of Pelagics for their beefy endurance and bone crunching action.