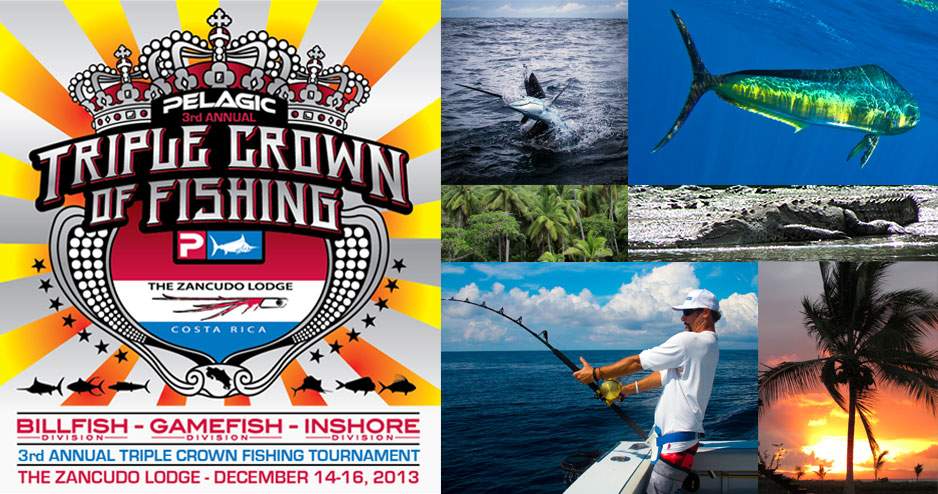 The Third Annual Pelagic Triple Crown of Fishing Tournament wrapped up in fine fashion last week, concluding on December 16th, 2013. Hosted by the world-famous Zancudo Lodge, located on the Southern Pacific side of Costa Rica, this event showcased the great sport fishing the tropical paradise has to offer. And with $15,000 in cash and prizes on the line, it provided tons of excitement right up to the final minutes of fishing.

The fun tournament structure offered anglers great variety on targeted species and different fishing styles, with the team the performed the best across all four divisions (Billfish, Tuna, Dorado, and Roosterfish) winning the overall title. Teams could score points via successfully documenting the release of blue marlin and sailfish (Billfish category), or roosterfish measuring 24” or more; and by weighing your heaviest tuna and dorado daily.

As previously mentioned, the fishing during the event was nothing short of sensational. For the first time in the tournament’s young history, there were more blue marlin recorded than there were sailfish. This stat puts the icing on the cake for Costa Rica in a year that saw an unprecedented catch and release total for blue marlin. It also speaks for a healthy blue marlin population in general – something that all anglers should appreciate.

In conjunction with the hot marlin bite during the tournament was a mass showing of dorado that weighed in the 15-30 pound class. All of the blue marlin that were caught were estimated to weigh between 300-400 pounds, and were surely feeding on the dorado that were seen throughout the event.

The stars of the show during the previous two events were large yellowfin tuna, some of which weighed up to 150-pounds. While the quality and size of tuna was not at the same level as in year’s past, the quantity of “school-sized” fish definitely made up for it. The scrappy 20-30 pound yellowfin that were caught put on a fight on lighter tackle.

On the inshore scene, those teams that spent time fishing close to the beach were rewarded by scoring plenty of points in the Roosterfish Division. By slow-trolling a lively blue runner or sardine bait, or by throwing poppers and other attractive lures towards structure provided a lot of excitement on these hard-fighting members of the jack family.

In the end, there could be only one overall winner. With a total score of 1100-points, Team Bad Habit came out on top, taking home the Triple Crown trophy as well as a hefty paycheck.

Thank you to all tournament participants who traveled from all regions of the United States, Canada, and Costa Rica to take part in the event. The perfect mix of camaraderie and competitiveness made for and extremely fun tournamenrt. Thank you to the staff of Zancudo Lodge for offering an incredible experience and top notch customer service – Gregg and Goldine, your lodge is, simply put, beautiful, and we can’t wait to come back again next year!