November 2-4, 2018 – Cabo San Lucas, Mexico - The highly-anticipated Inaugural ROCKTAR! Tuna Tournament presented by PELAGIC kicked off last week in the bustling city of Cabo San Lucas. November is typically prime season for big tuna in the rich waters off southern Baja, and with reports of consistent tuna in the triple digits coming in recent weeks, the stage was set for an exciting two days of fishing.

$101,800 reasons to smile for Team CHINITO BONITO // The "eye in the sky" captures the shotgun start // One-of-a-kind custom Mahagony trophies up for grabs 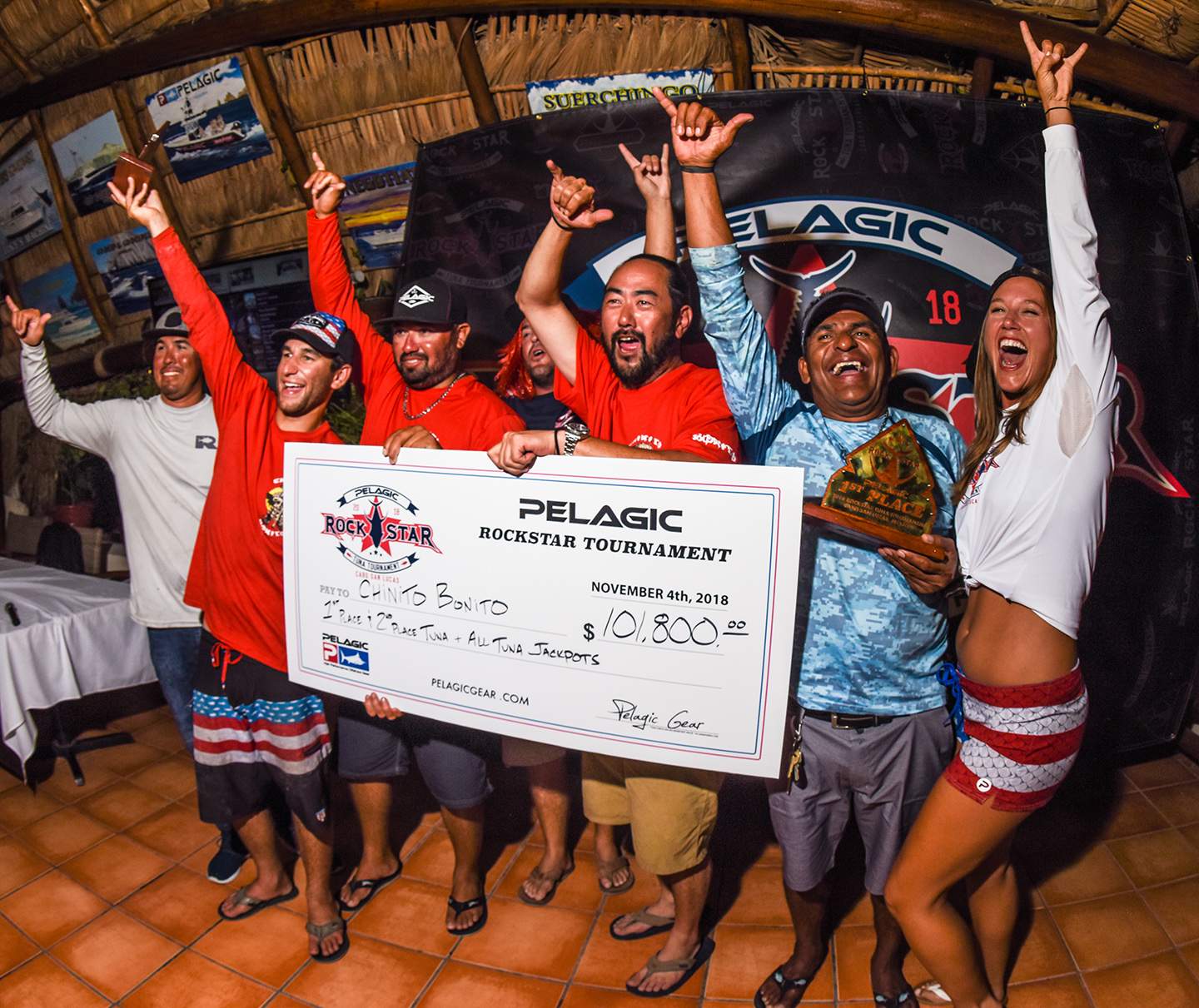 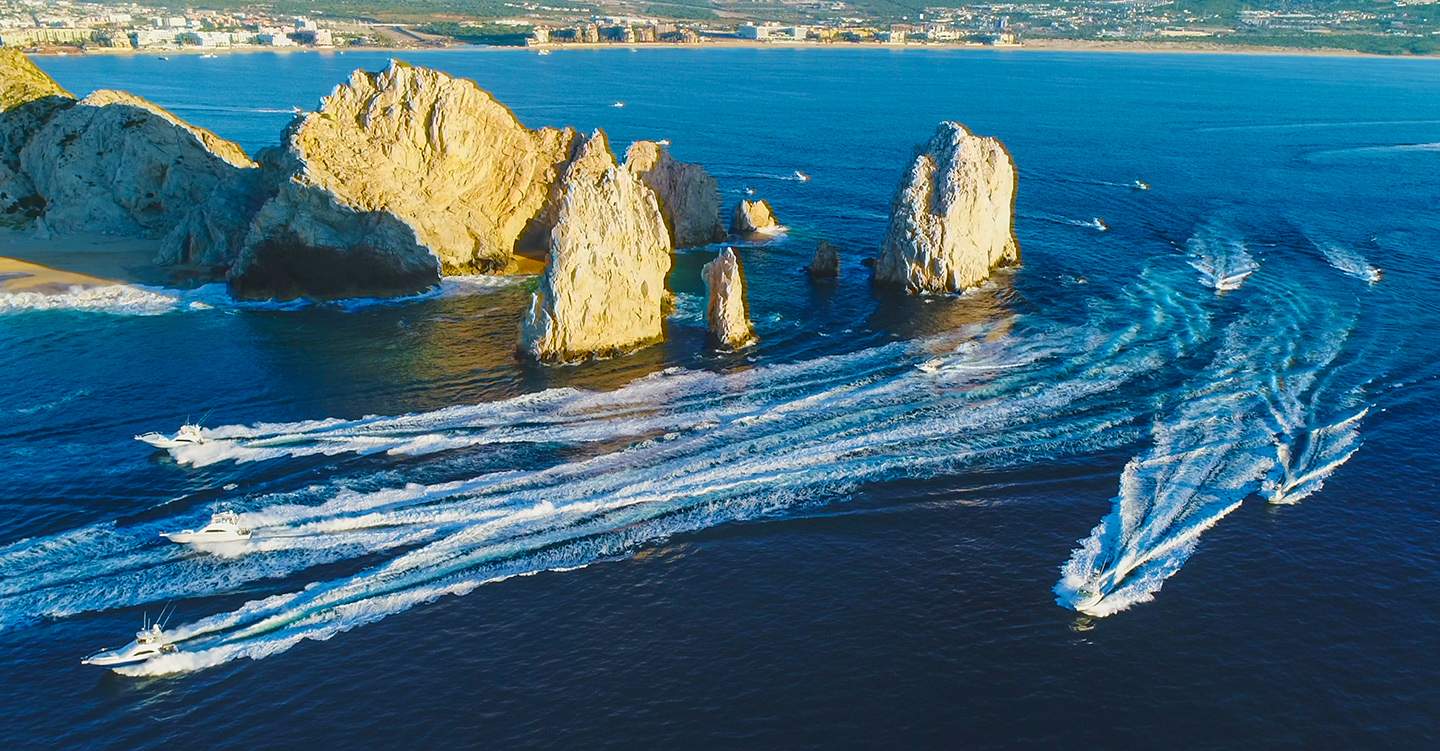 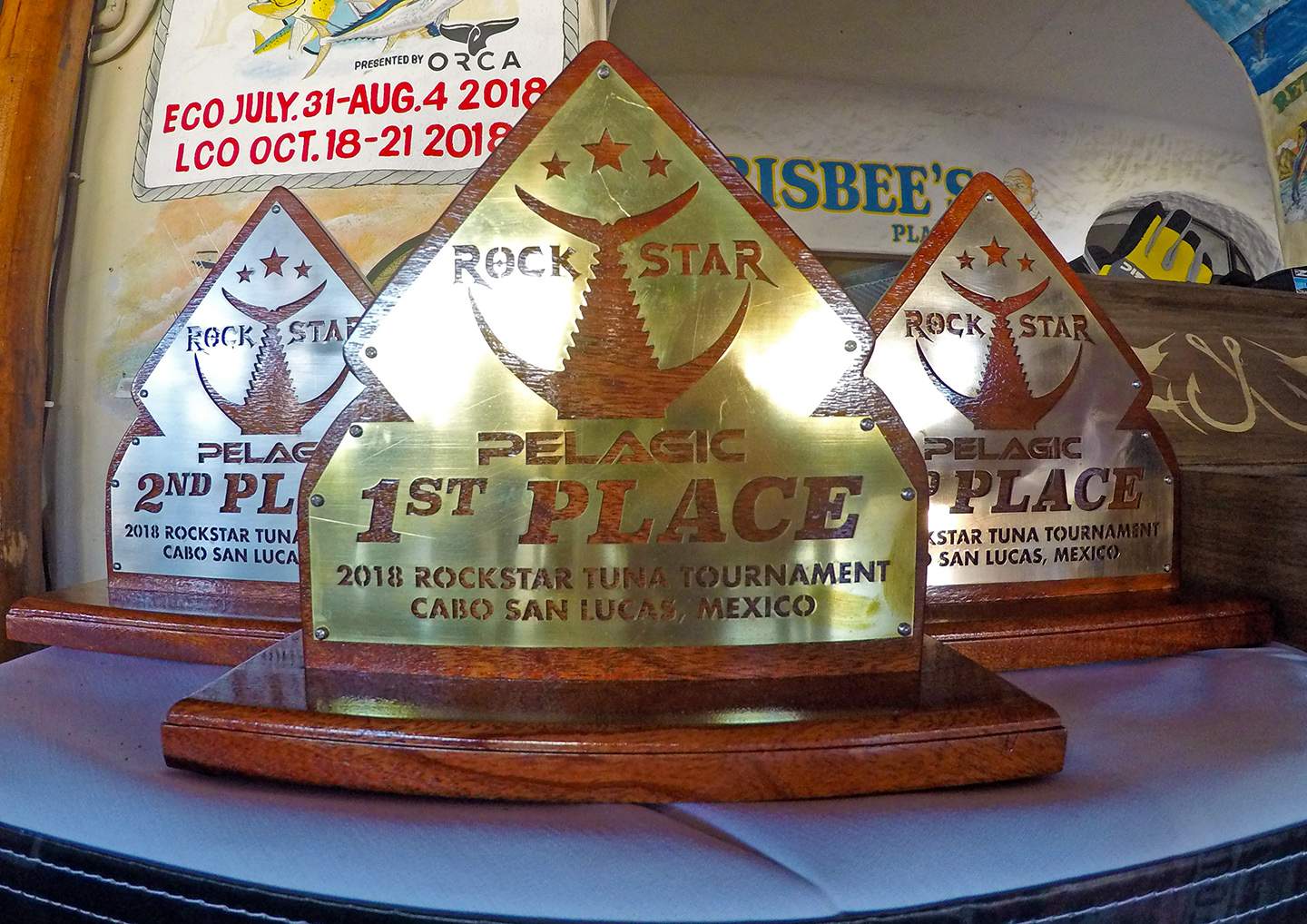 The ROCKSTAR! Tuna Tournament is a team event with cash and awards to well over $150,000. Awards were presented to anglers and teams for catching the heaviest yellowfin tuna during the two-day tournament, as well as optional daily jackpots for the heaviest tuna, wahoo and dorado. 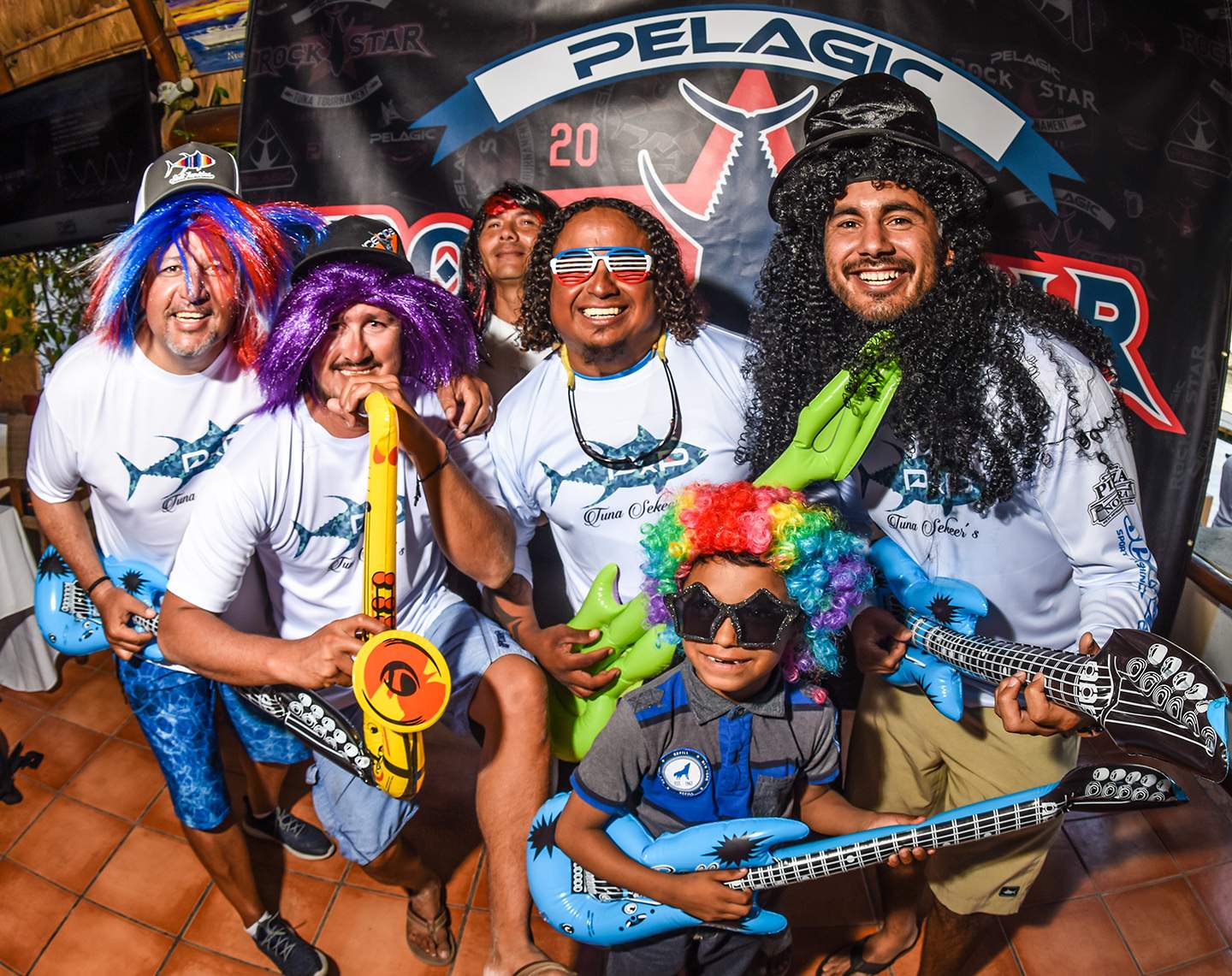 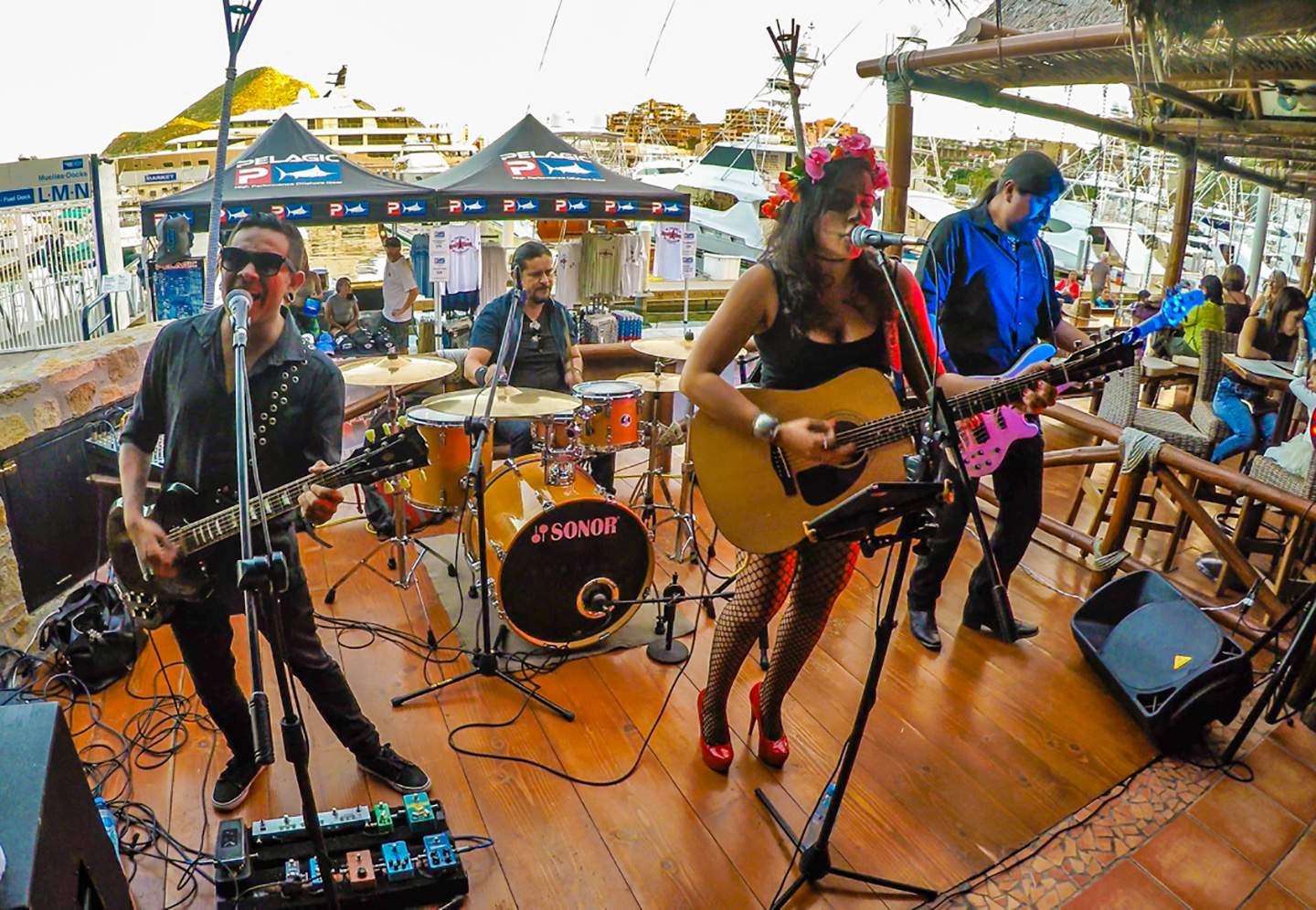 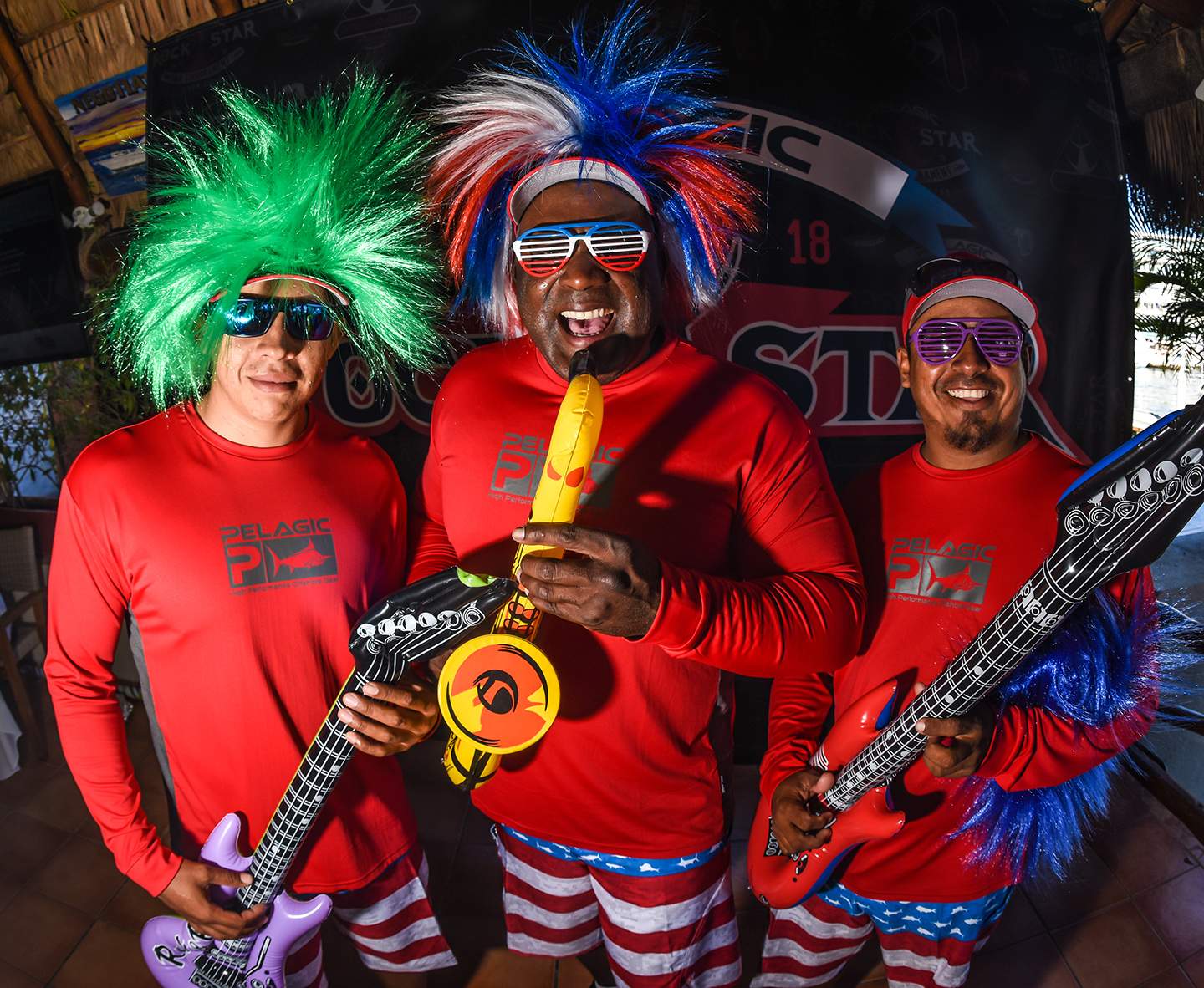 Rocking to the tunes of Lady Electric Band , teams enjoyed great food and libations from Baja Cantina, who played host to the Tournament Registration and Kick-off Party. The PELAGIC mega-raffle kept things rolling as several teams walked away with some premium gifts from PELAGIC, including: AquaPak backpacks & duffel bags, high-end Pelagic Polarized sunglasses, and Limited-Edition Marlin Magic Lures. The PELAGIC retail tents were set up along the boardwalk and featured custom PELAGIC ROCKSTAR! Tuna Tournament apparel, including hats, tees and tech tops.

Team PELAGIC ready to get the party started aboard SNEAK ATTACK // Twin flares signal the start of the Inaugural ROCKSTAR! Tuna Tournament // Tournament boats blast off toward the tuna grounds // The imaculate 87' TOURBILLION served as Official start boat for the Tournament 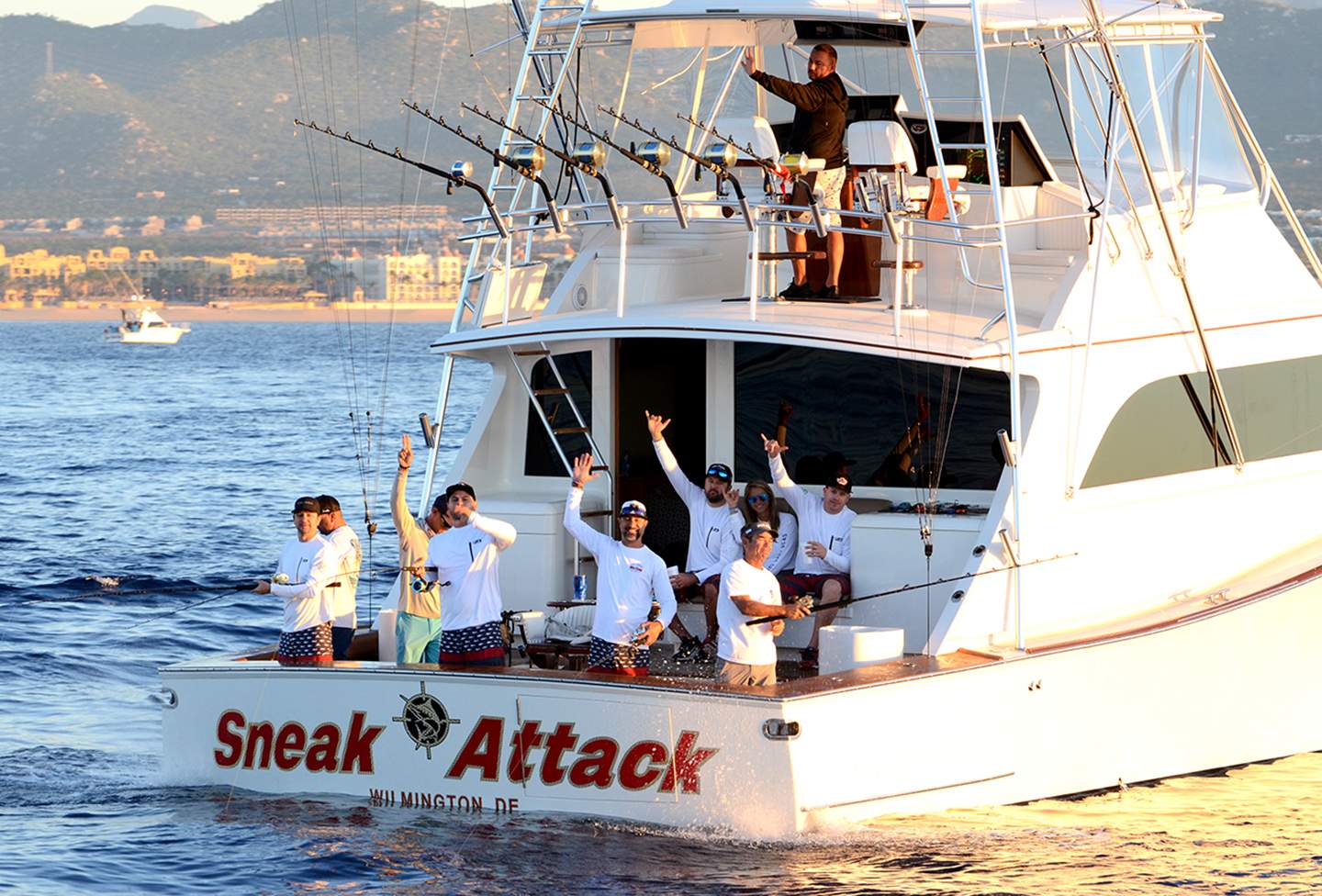 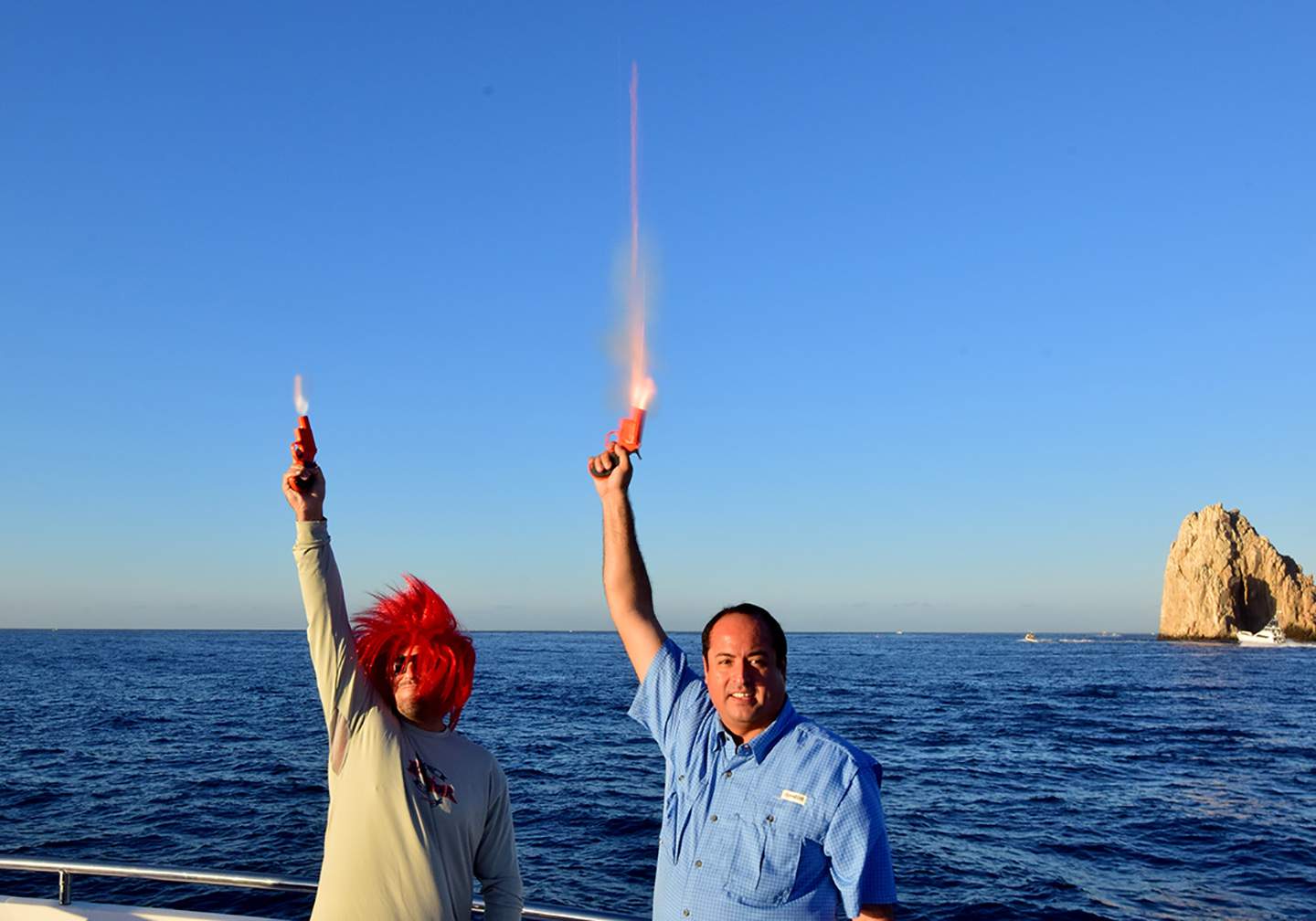 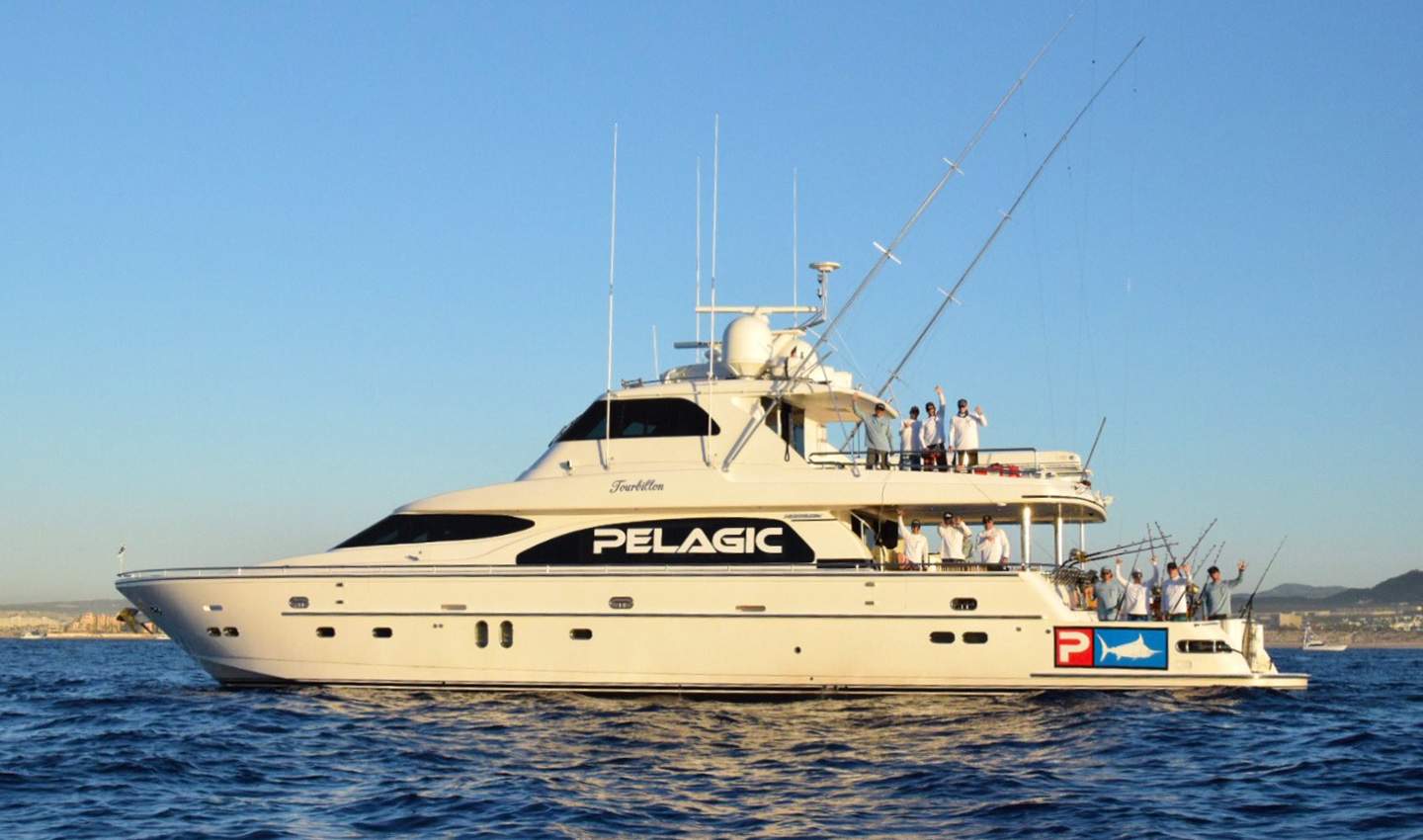 As the Baja sun rose over the horizon on Day 1 of fishing, teams lined up between ‘El Arco’ and the Official ROCKSTAR! Tournament start boat – the beautiful 87' Horizon Yachtfisher TOURBILLION . At exactly 7:00am, the signal of twin flares sent teams throttling toward the open blue as the ROCKSTAR! Tuna Tournament had officially begun.

The Tournament crew living the ROCKSTAR way // CHINITO BONITO setting the bar high on Day 1 with a 243-lb. tuna // POCKET ACES taking the Day 1 Wahoo Jackpot with a 23.5-lb. wahoo while an 18.9-lb. dorado was enough to claim the Dorado Jackpot for F-TROOP 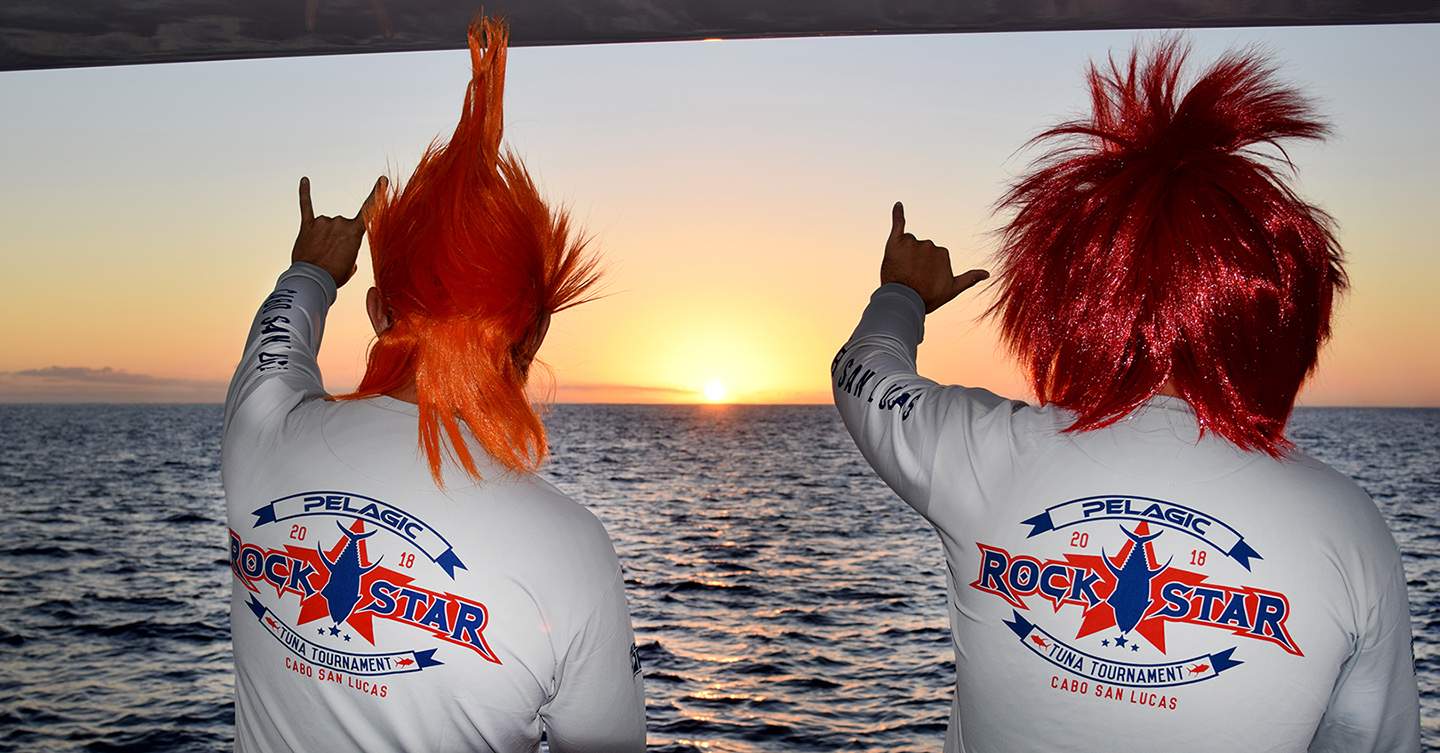 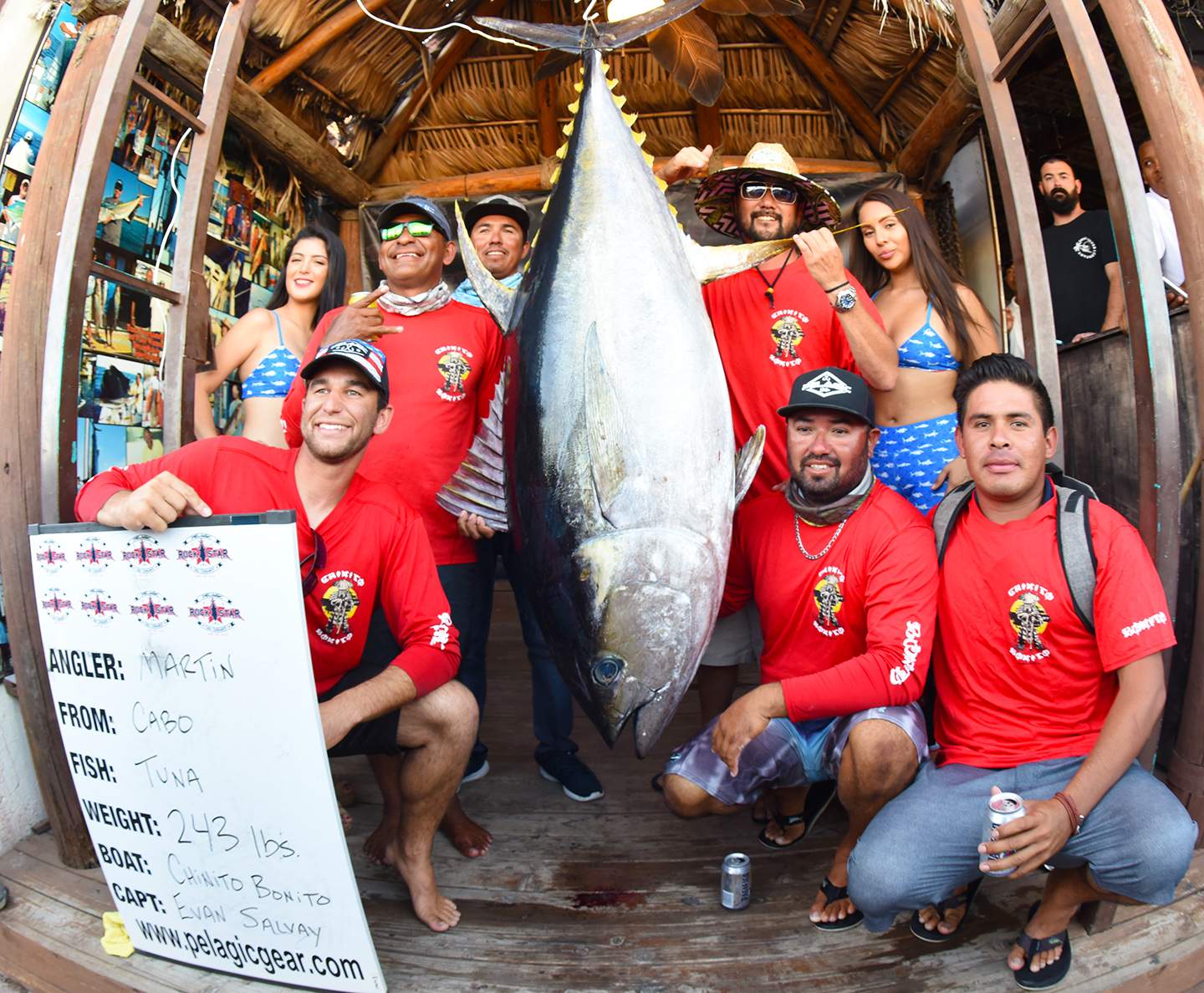 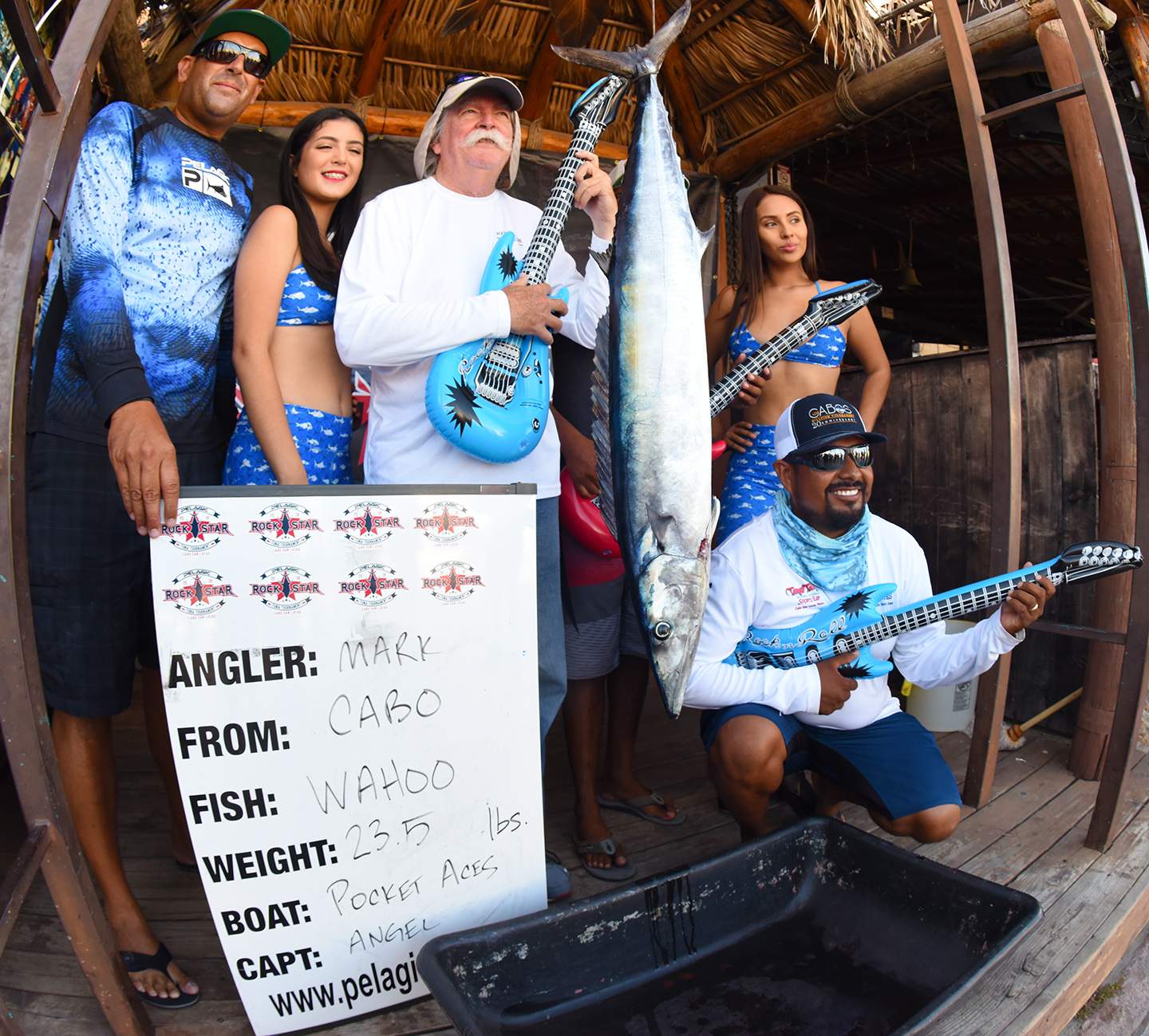 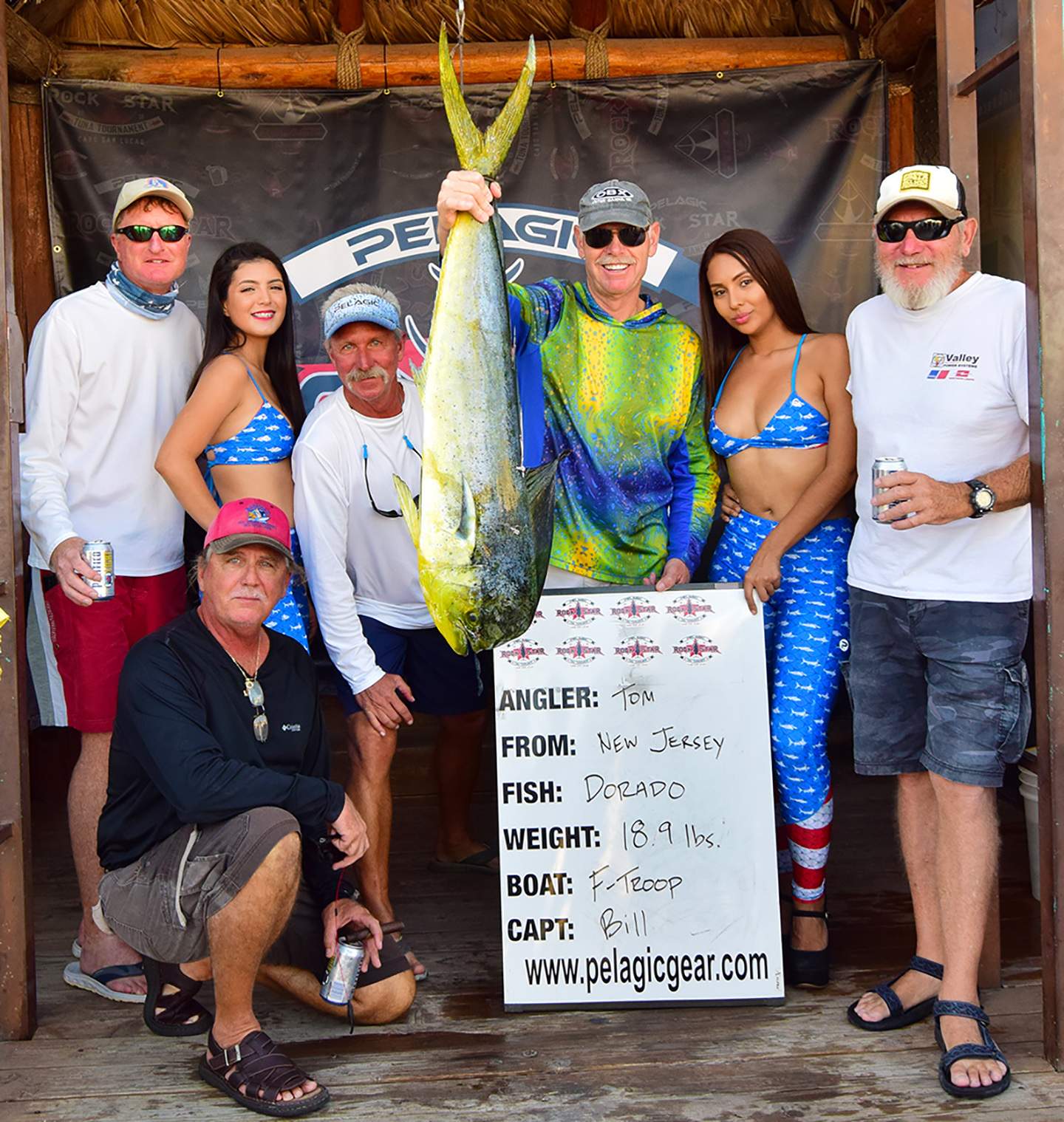 Day 1 saw all gamefish categories filled as a number of tuna, wahoo, and dorado found their way to the scale. But it was Team CHINITO BONITO’s monster yellowfin tuna that drew the biggest crowd. Onlookers whooped and hollered as the final weight of 243 lbs. was announced and a sea of cameras & cell phones captured the moment. Would lightening strike twice for this young team from Southern California? 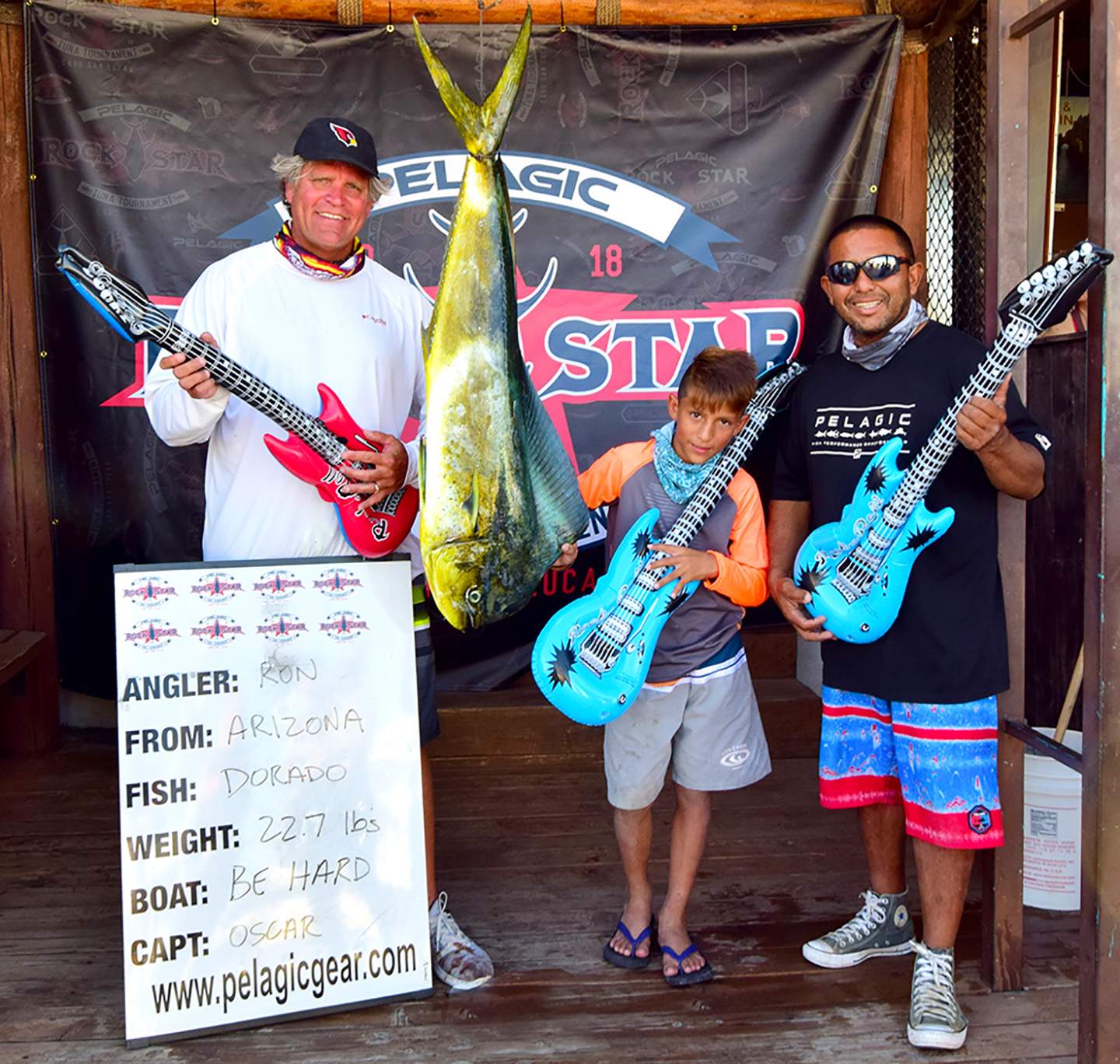 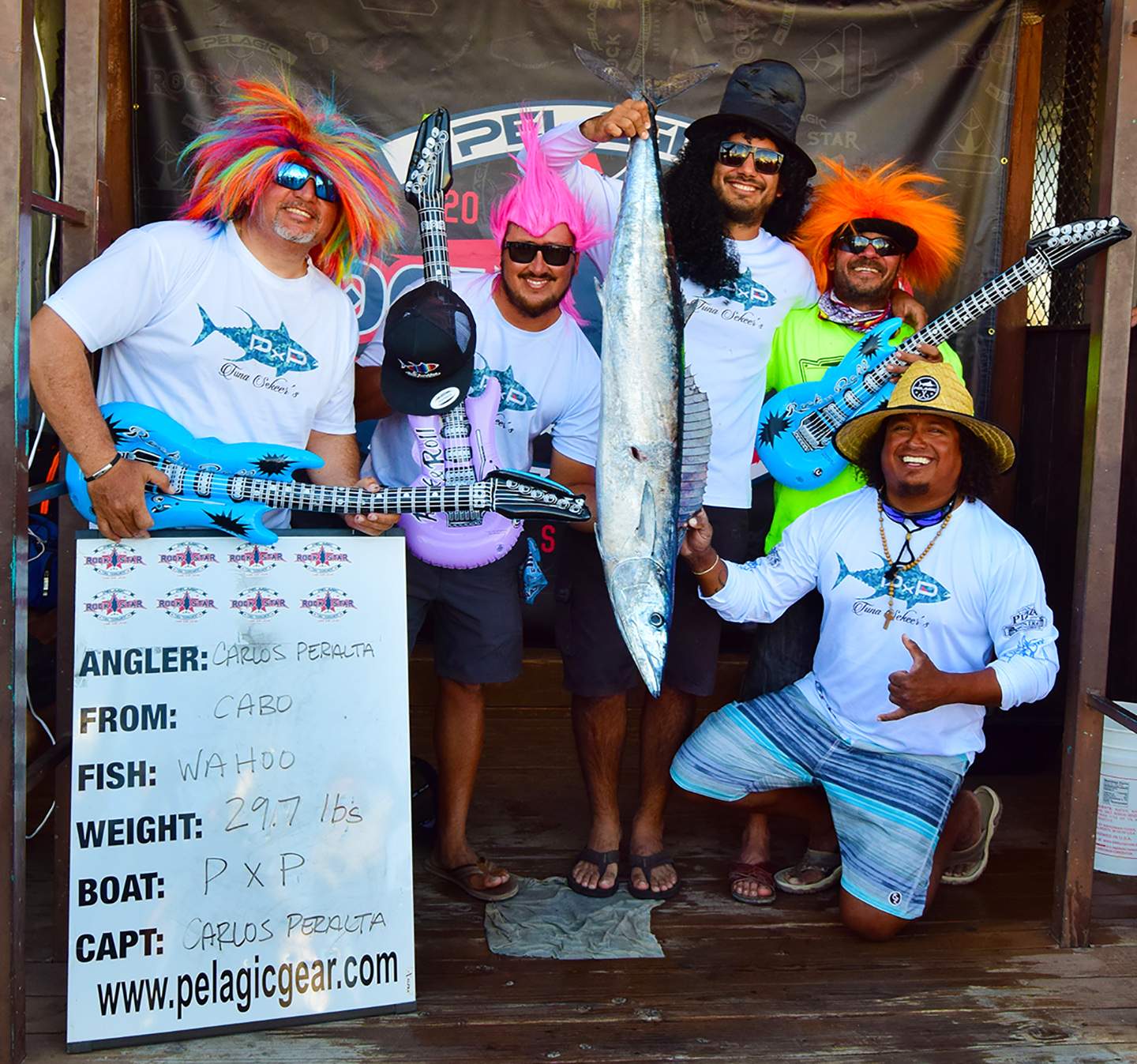 The bar was set high on Day 1, and teams knew they needed a big fish to be in contention. A number of dorado, wahoo, and tuna under 100 lbs. had already been weighed when Team CLOUD NINE came to the scales with a big tuna. When the scale had settled, the team had taken over first place for Day 2 with a 185.8-lb. fish! However, the weigh-ins were far from over, and Team CLOUD NINE could only wait and hope their big tuna would stand.

A 185.8-lb. yellowfin put Team CLOUD NINE in the lead for the Tuna Daily Jackpot on Day 2 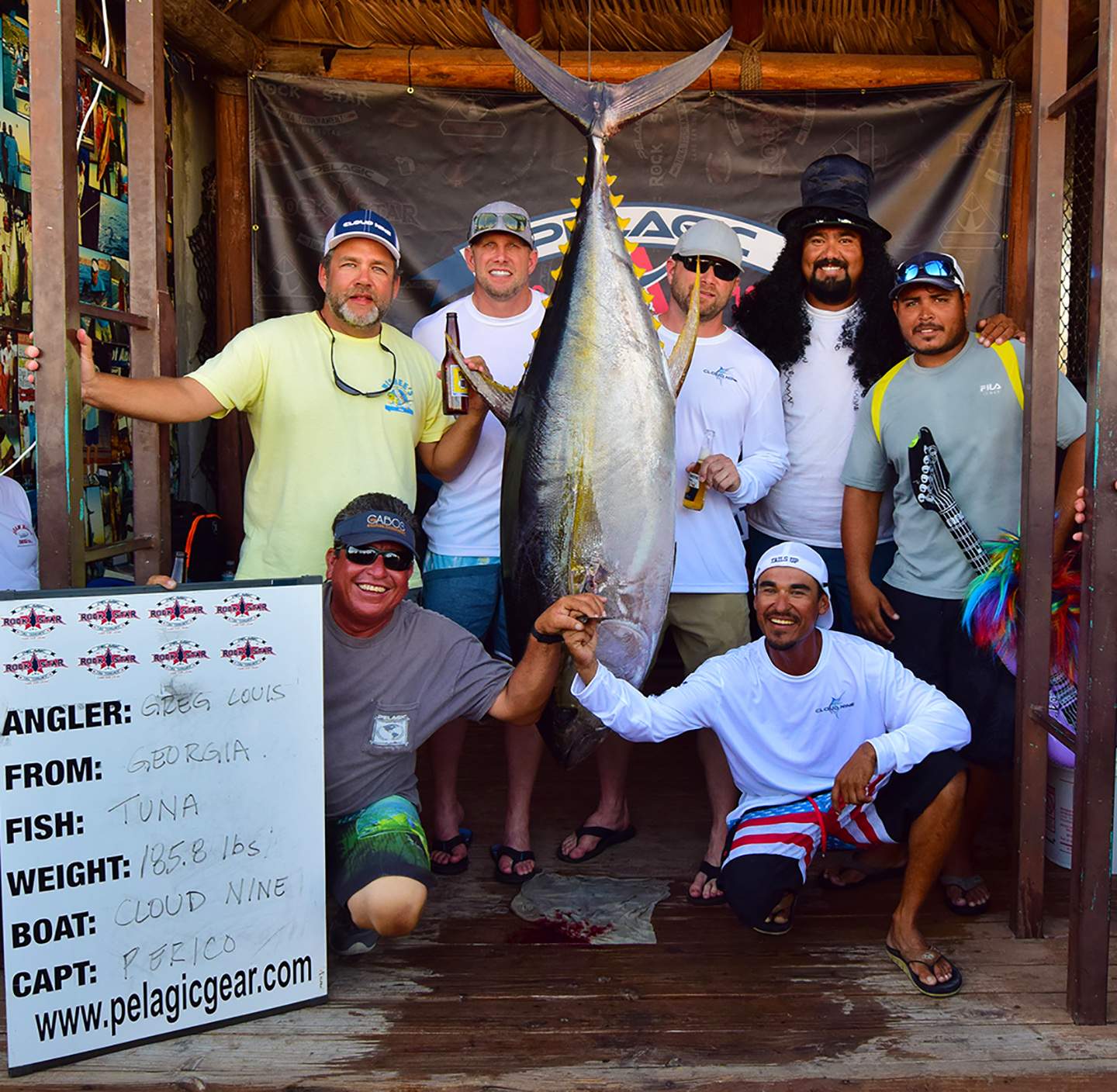 With little more than an hour left to weigh in, Team CHINITO BONITO hit the docks with what looked to be another serious big-fish contender. The crowd of onlookers began to get loud as the giant tuna was hoisted from the dock cart at Gricelda’s Smokehouse – the Official Weigh Station of the Rockstar! Tuna Tournament. As the scale settled and the weight of 218 lbs. was announced, the crowd erupted as Team CHINITO BONITO had done it again! 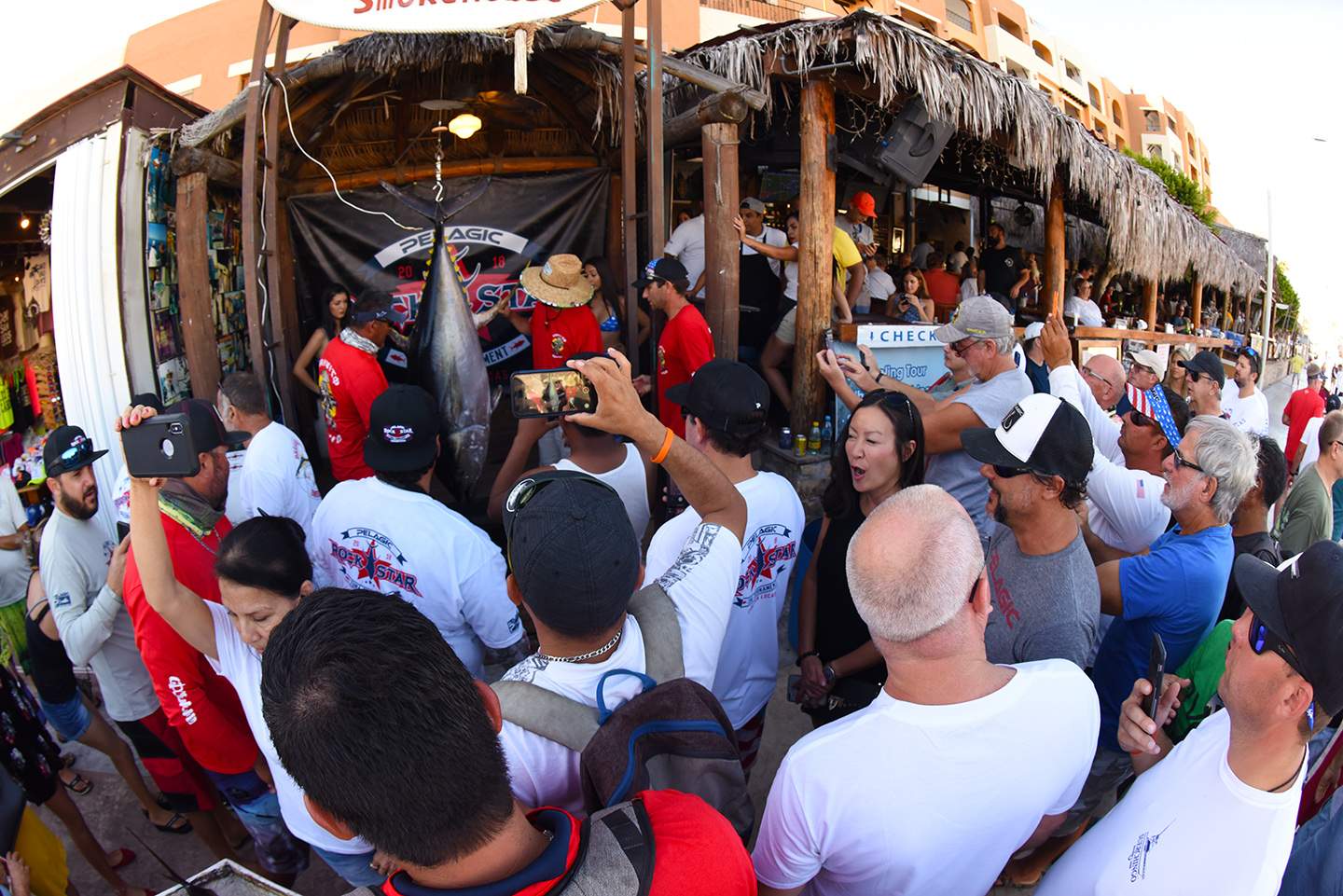 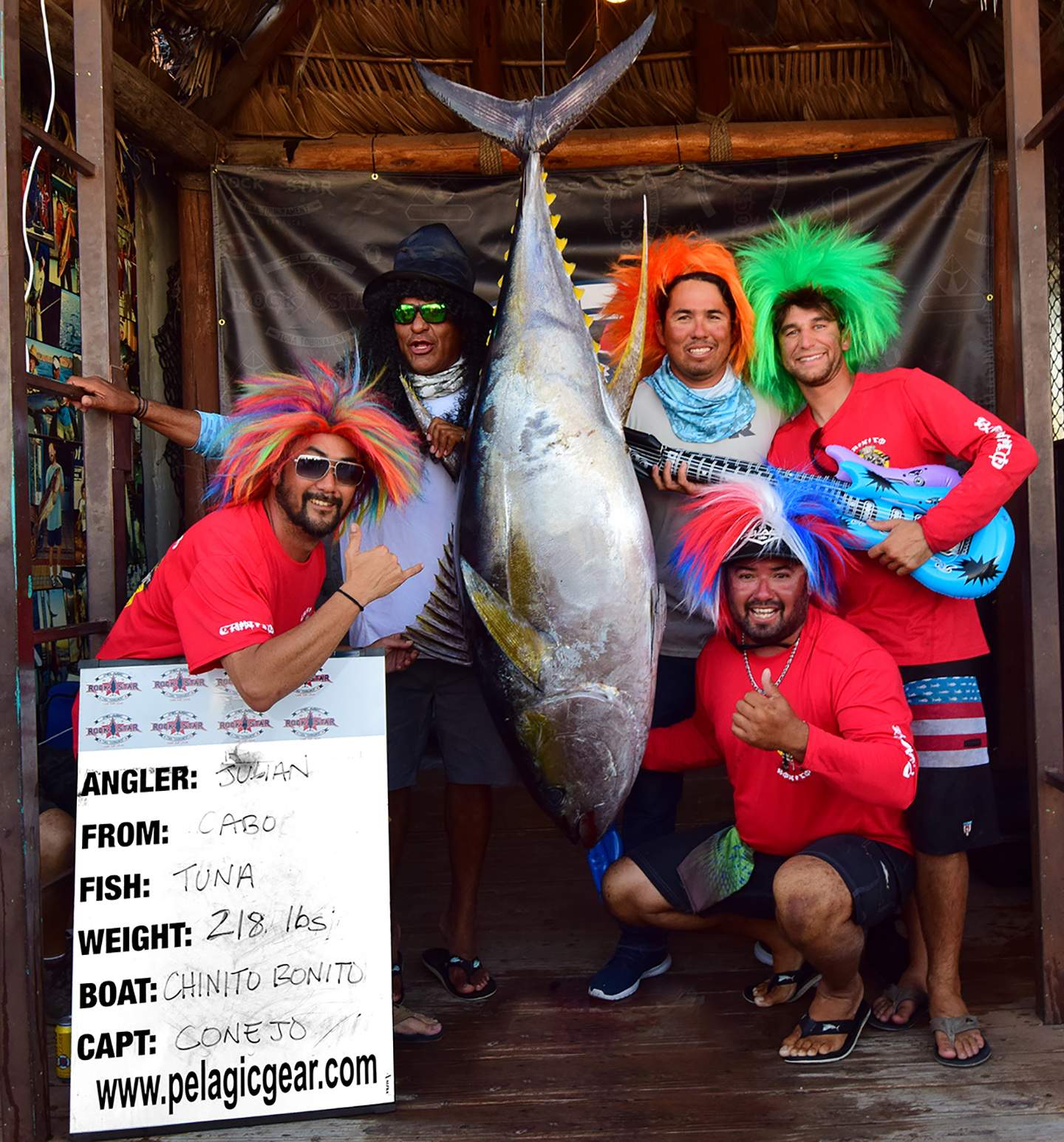 Upon conclusion of Day 2, the Awards celebration began at Baja Cantina as winning teams were announced and trophies and prizes were given out. After winning a $3,004,900 payout the week before, 2018 Bisbee’s Black and Blue Marlin Tournament Winner Team CHINITO BONITO continued their hot streak by taking 1st and 2nd Place Tuna Overall, sweeping all the daily tuna jackpots, and earning a whopping $101,800 tournament winning check! 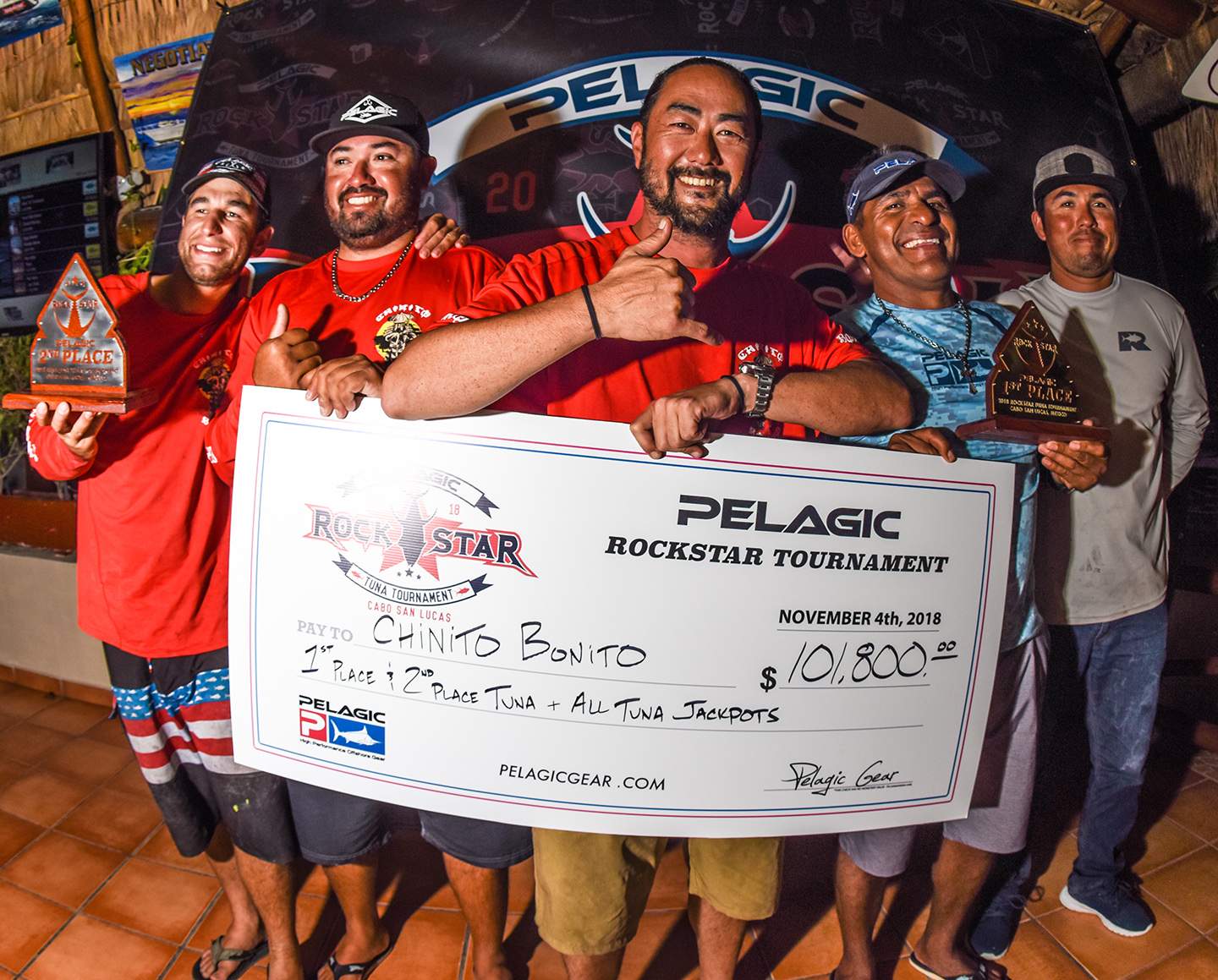 Here’s how the rest of the numbers shook out: 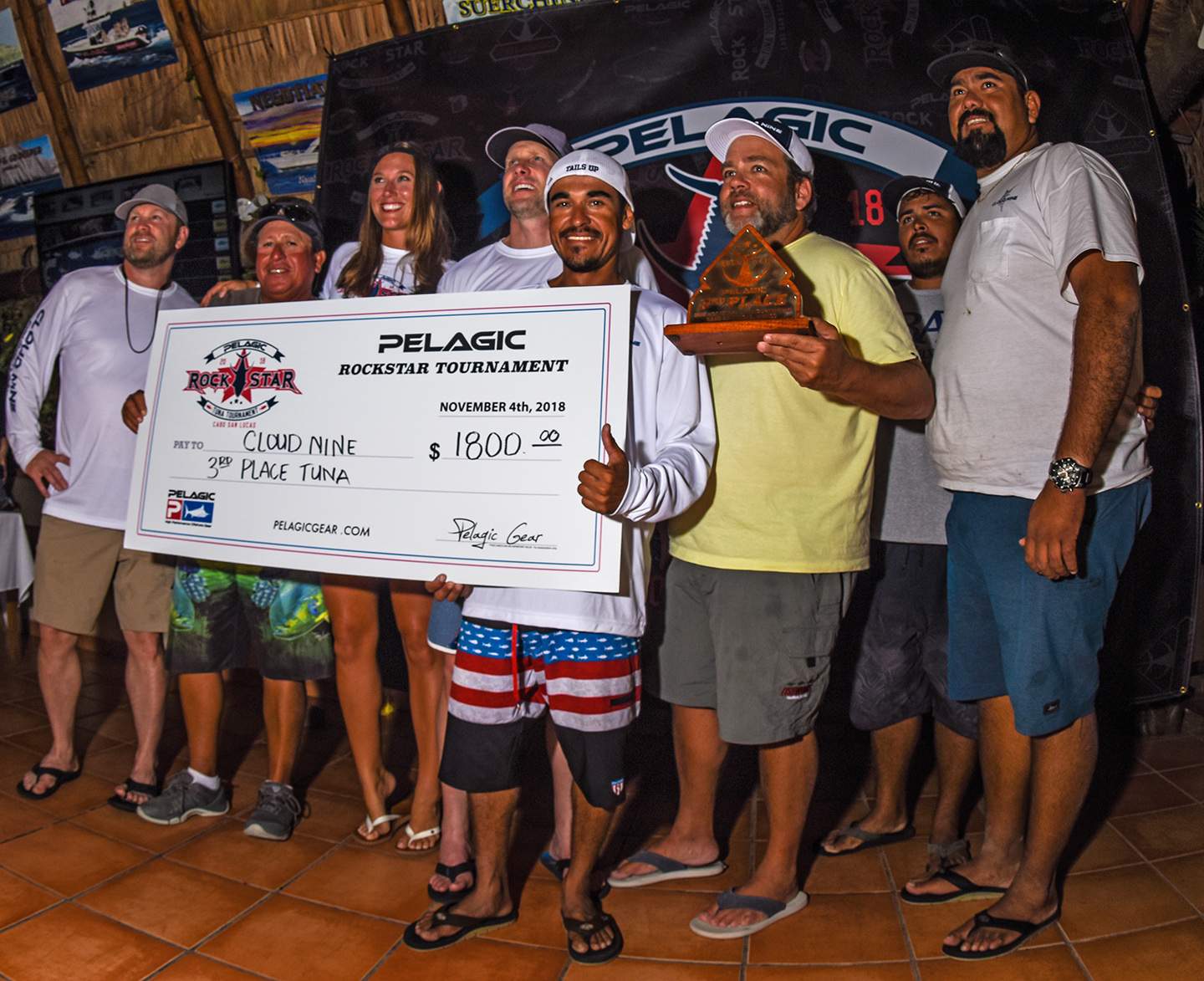 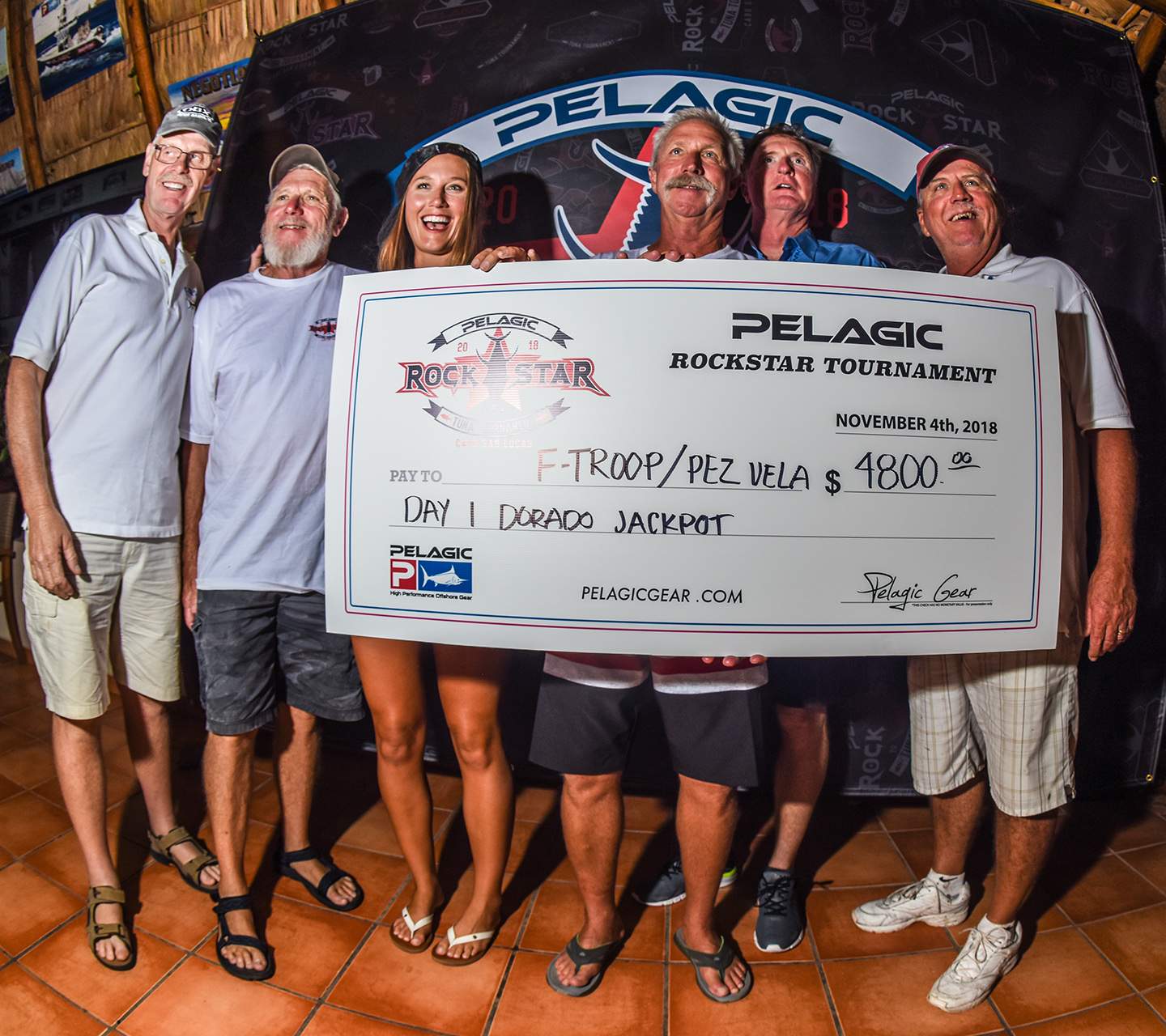 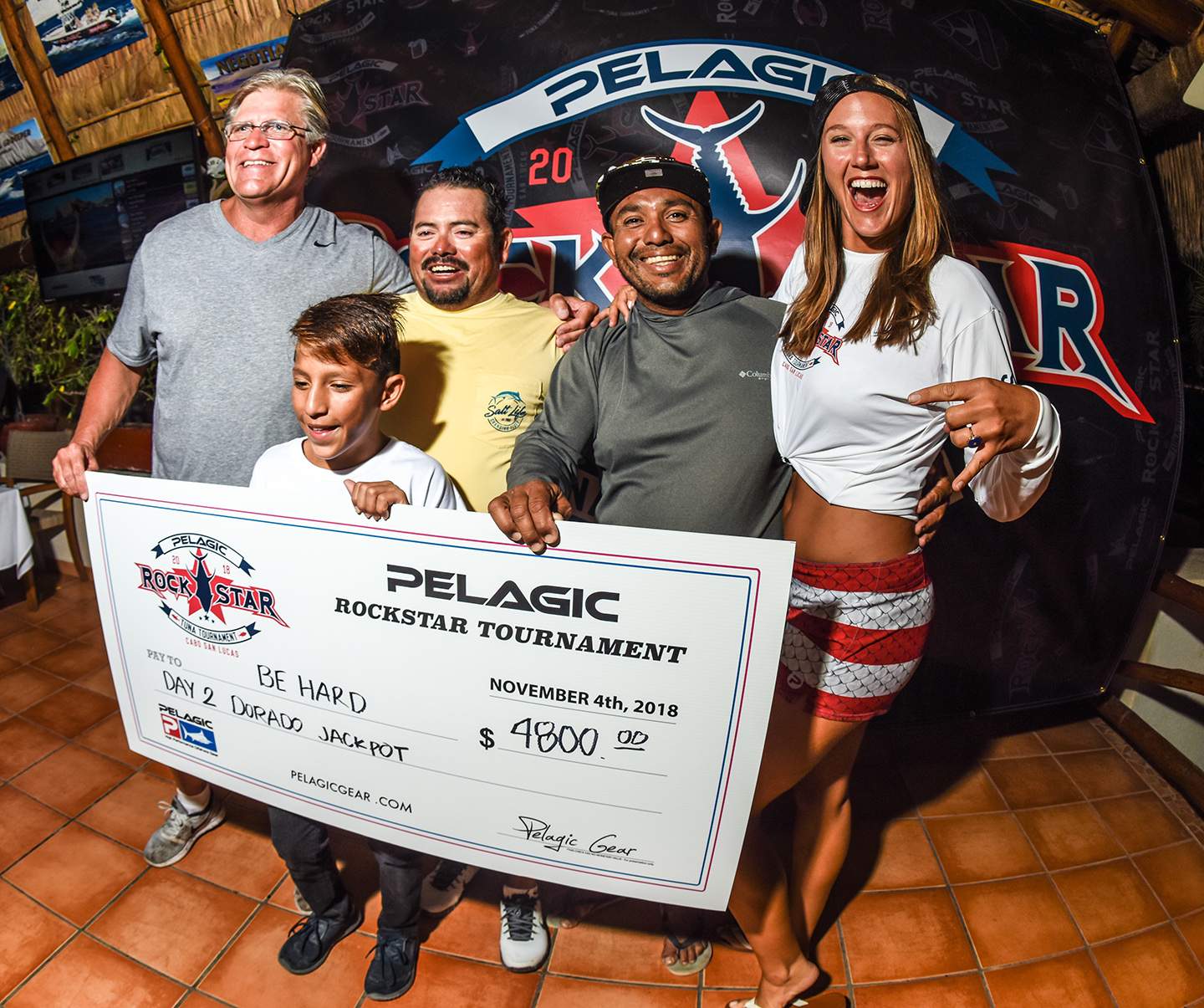 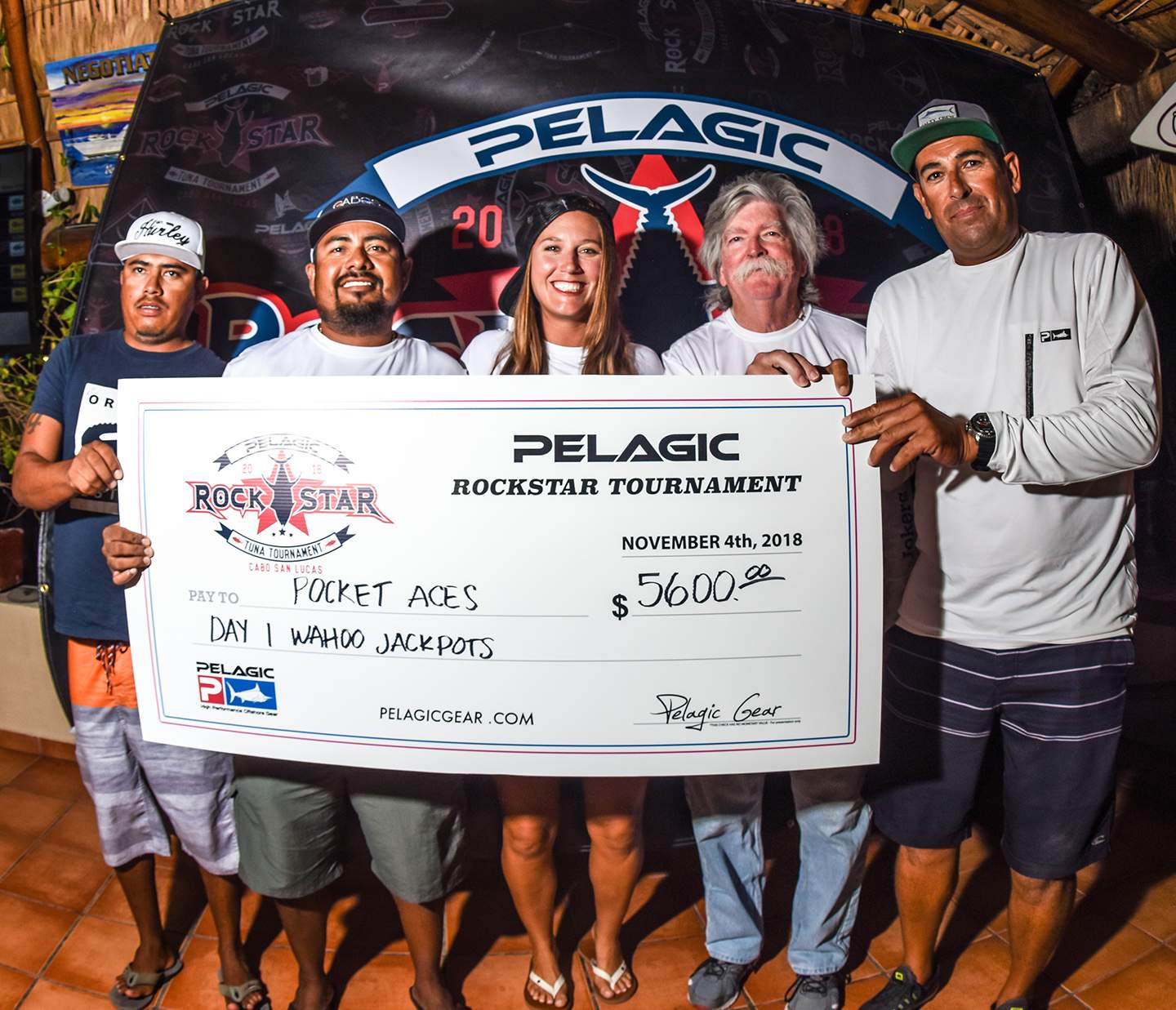 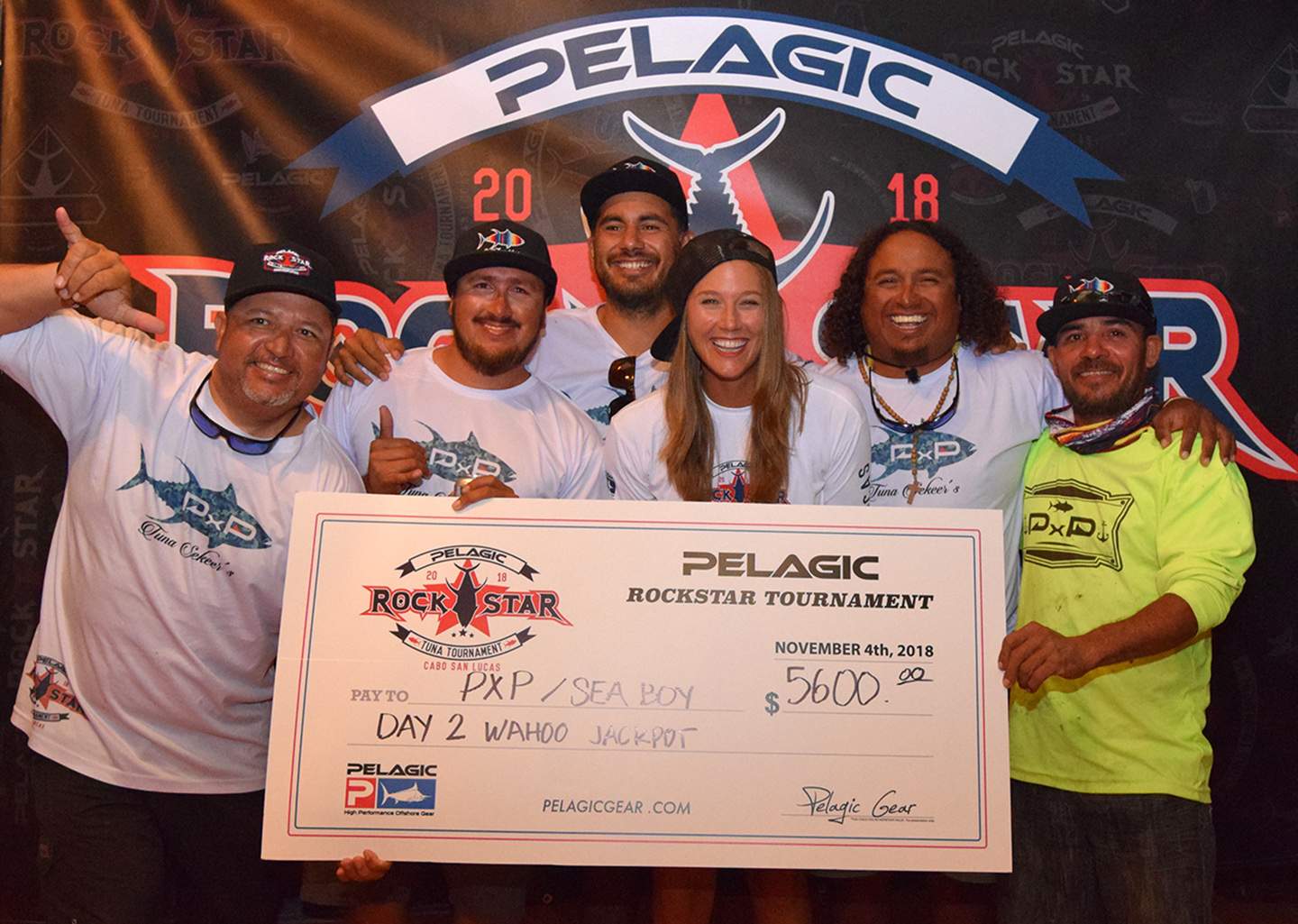 PELAGIC would like to thank all tournament participants and our generous sponsors for making this another incredible event south of the border. We hope to see you all again in November 2019 for the 2nd Annual ROCKSTAR! Tuna Tournament presented by PELAGIC!

Join us January 11-13, 2019 for the 3rd Annual ROCKSTAR! Offshore Tournament presented by PELAGIC out of beautiful Marina Pez Vela [Quepos, Costa Rica]! Click the image below for full Tournament details and to register now.