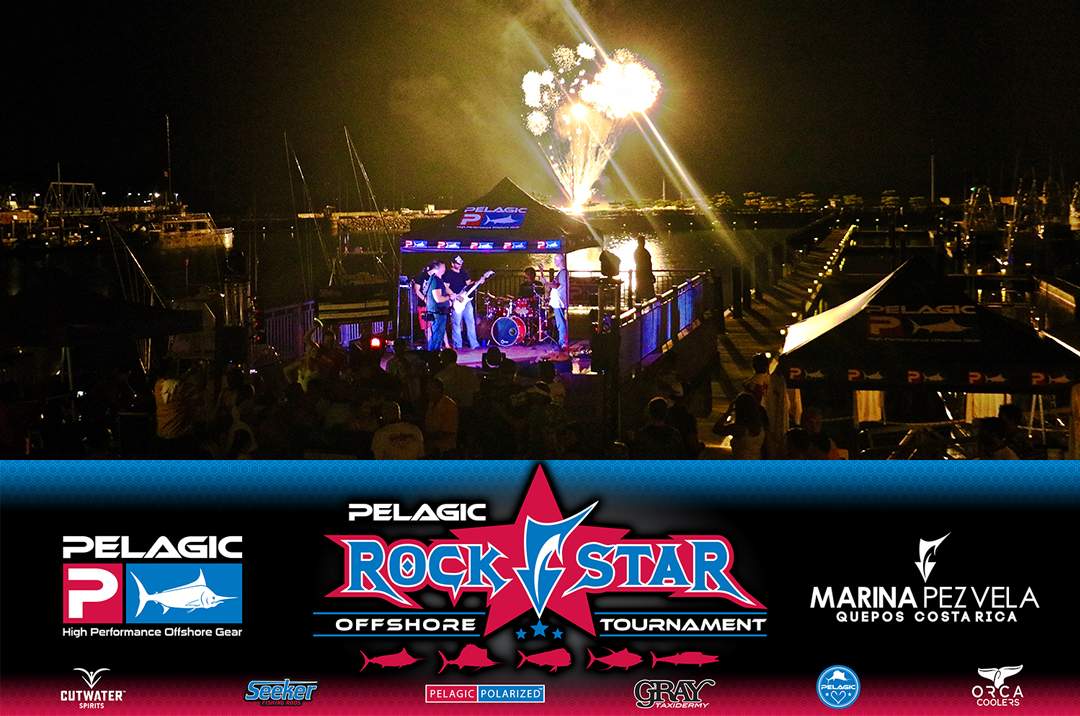 The sound of AC/DC ’s “Hells Bells” radiated from a stack of high voltage amplifiers as a shaggy, Costa Rican guitarist serenated a procession of tournament vessels through the port of Marina Pez Vela. The twenty-seven-team fleet lined up in the warm, Pacific waters off the coastal town of Quepos, Costa Rica with heavy anticipation of red-hot fishing ahead. Directly at 7:00am, twin flares fired to the sky signaled all captains to push their throttles to full as varying sportfishers – large and small – galloped towards the horizon. The Inaugural Rockstar! Offshore Tournament presented by PELAGIC had begun…

Below: The customary shotgun start in front of picturesque Marina Pez Vela was a "blast" 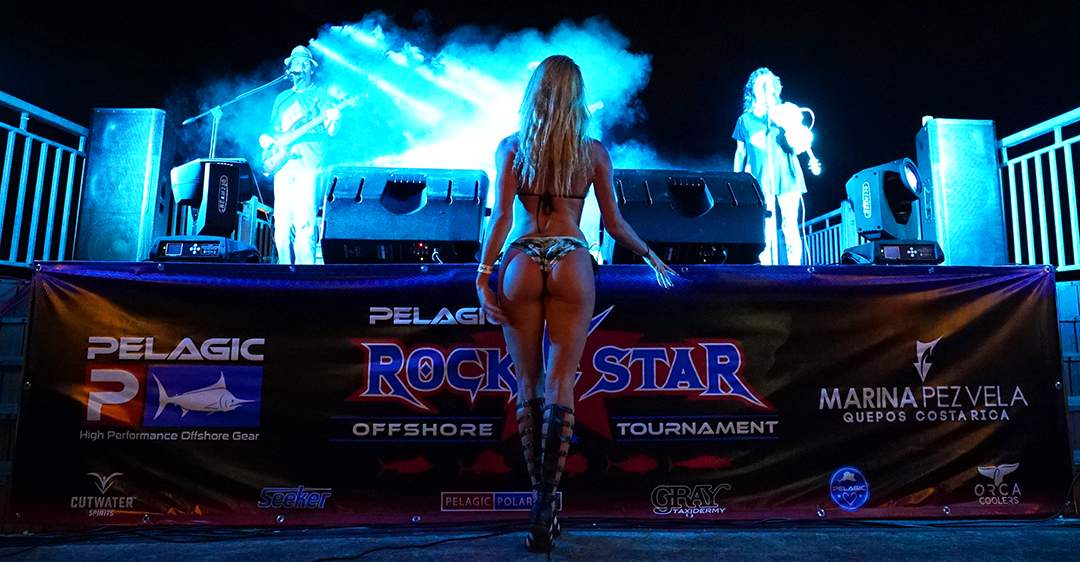 Below: Marina Pez Vela was the perfect venue for the Inaugural Rockstar! Offshore Tournament presented by PELAGIC

This tournament hosted both a large (35’ and over) and small (34’ and under) boat category, with general divisions of: Billfish Release, Tuna, Dorado, Wahoo. $110,000 in cash prizes were presented to teams for their performance in releasing the most aggregate billfish points (sailfish, blue marlin, black marlin, striped marlin) and/or weighing the heaviest two-fish total of each gamefish species (tuna, wahoo, dorado) during the two-day tournament.

Below: Plenty of dorado and sailfish joined the Rockstar! party 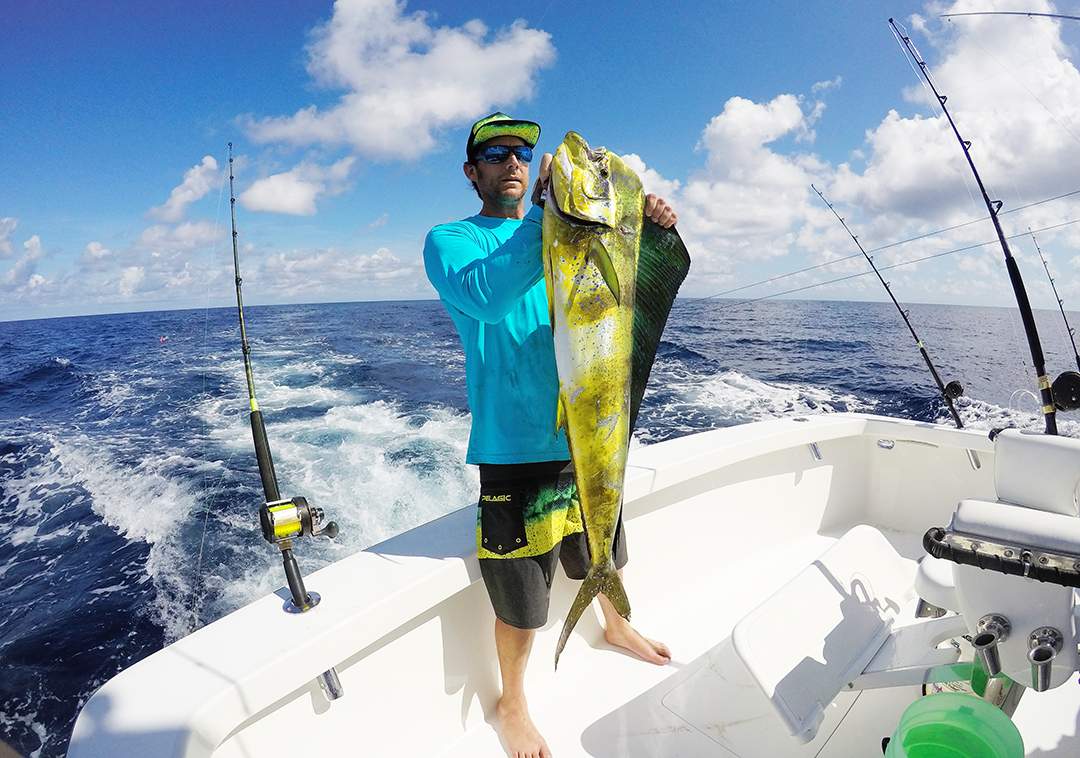 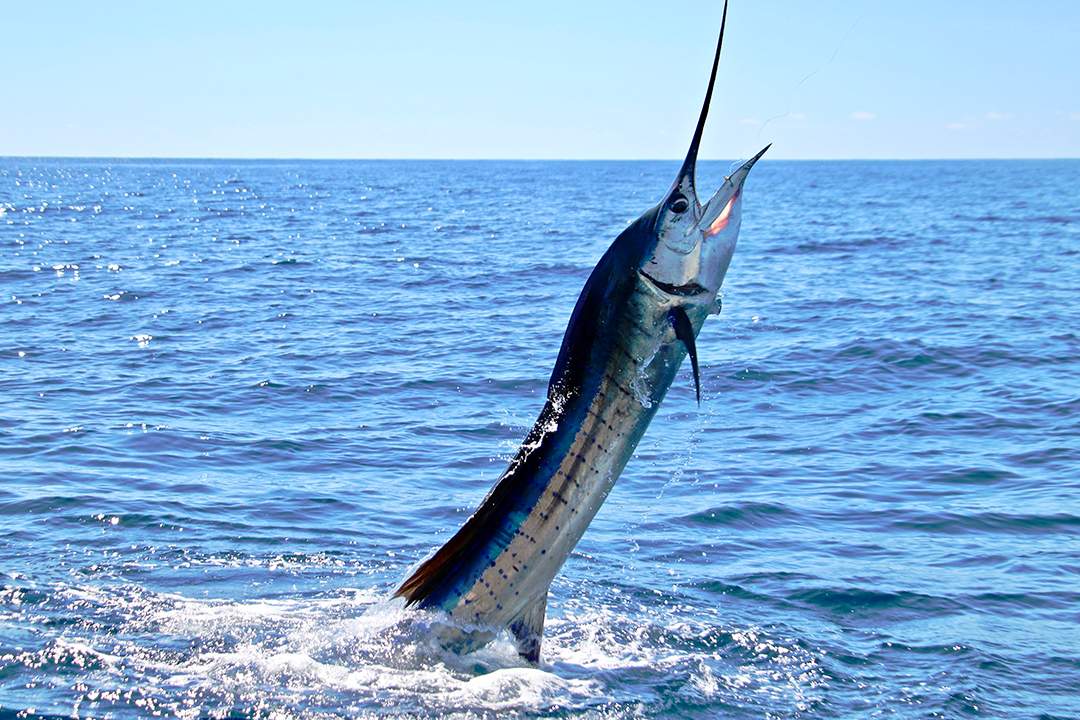 The event kicked off in fine fashion on January 12th as twenty-seven teams committed their entries and jackpot bets to the tunes of Ben Jammin & The Howlers playing live on the main amphitheater stage of Marina Pez Vela – the center piece of Rockstar! Tournament Village. In between sets, the beautiful PelagicGIRLs hosted a super raffle that featured some incredible prizes from Seeker Rods, Orca Coolers, Cutwater Spirits, and Pelagic Gear. The atmosphere was electric, the beverages were flowing, and everyone was geared up for day one of tournament fishing the next morning…

Below: PelagicGIRLs Skylar, Heidi, Heather, Marissa, Michelle, and Christina hosted the super raffle // Standing room only at the Captain's Meeting 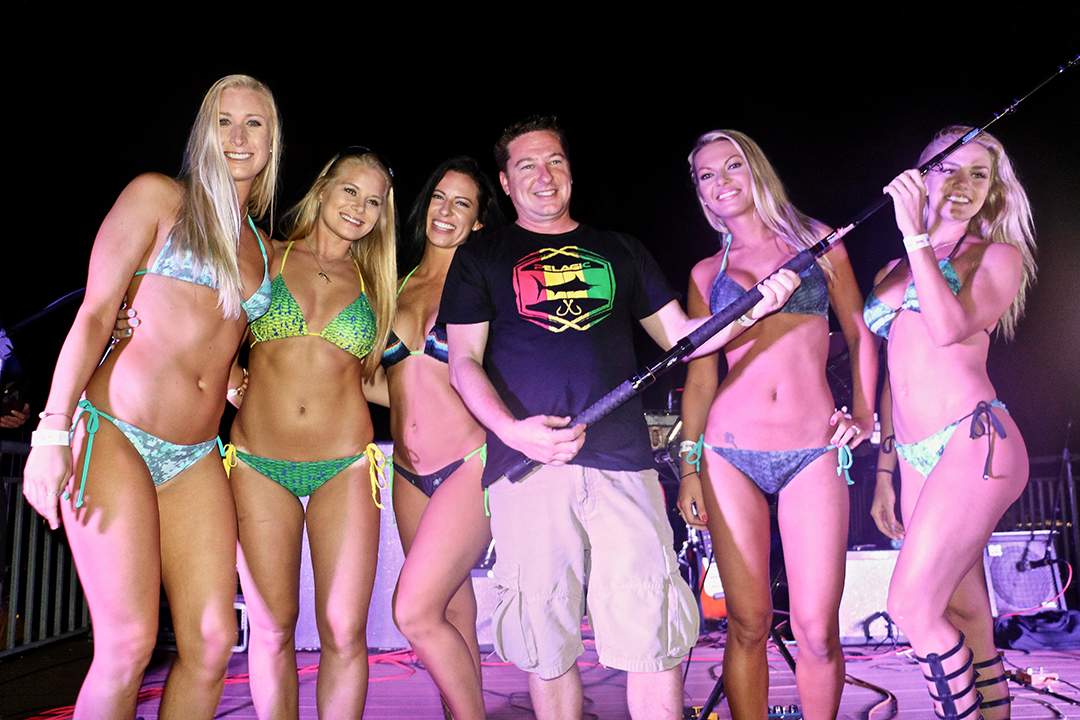 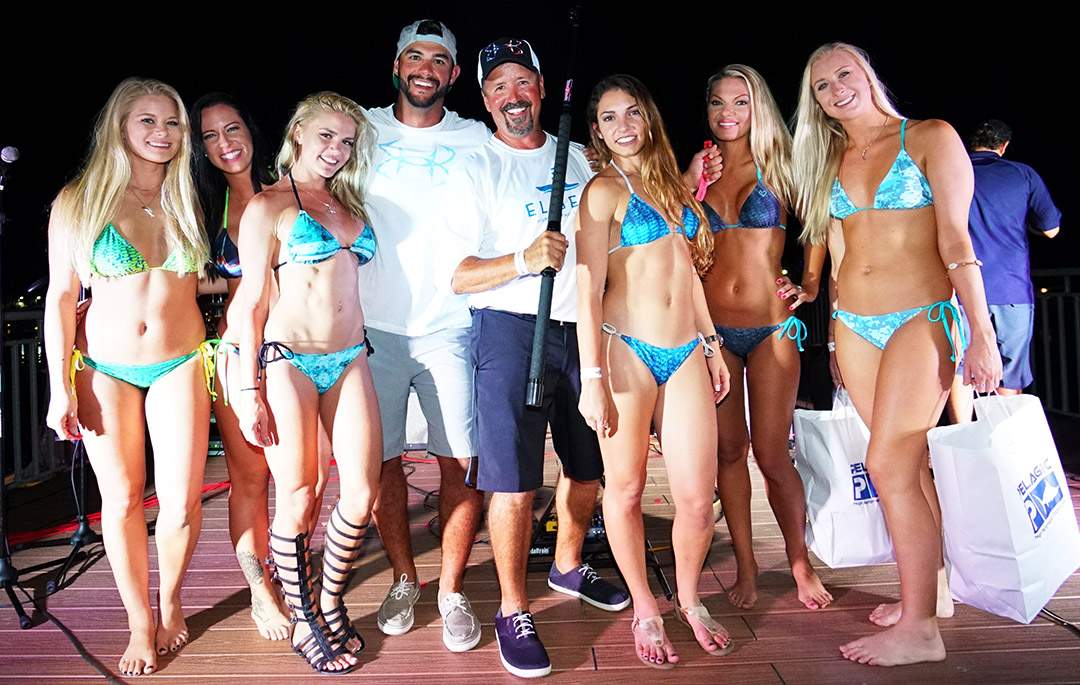 The first day saw 111 combined billfish tallied for our fleet highlighted by a 1200-point release total (9 sailfish & 1 blue marlin) and largest dorado of the day (23 lbs.) for Team Tranquilo . This performance sealed the deal on a triple header of daily jackpots, including levels of High Rollers $5K, $1K Billfish Release, and Dorado. In the small boat category, it was Team Good Day who held the lead for Billfish Release with a combined 800-points (5 sailfish & 1 blue marlin), while Swordfish weighed-in the heaviest dorado (28 lbs.). The evening culminated as the sun sank into the Pacific and Los Mojados played a high-energy mix of reggae-fusion-rock to cap off a great day on the water.

Below: Team Tranquilo wrangles one of their 10 billfish released during day one of the tournament // Los Mojados put on an incredible show // NFL Hall of Famer, Warren Sapp, all-smiles with a Costa Rican mahi 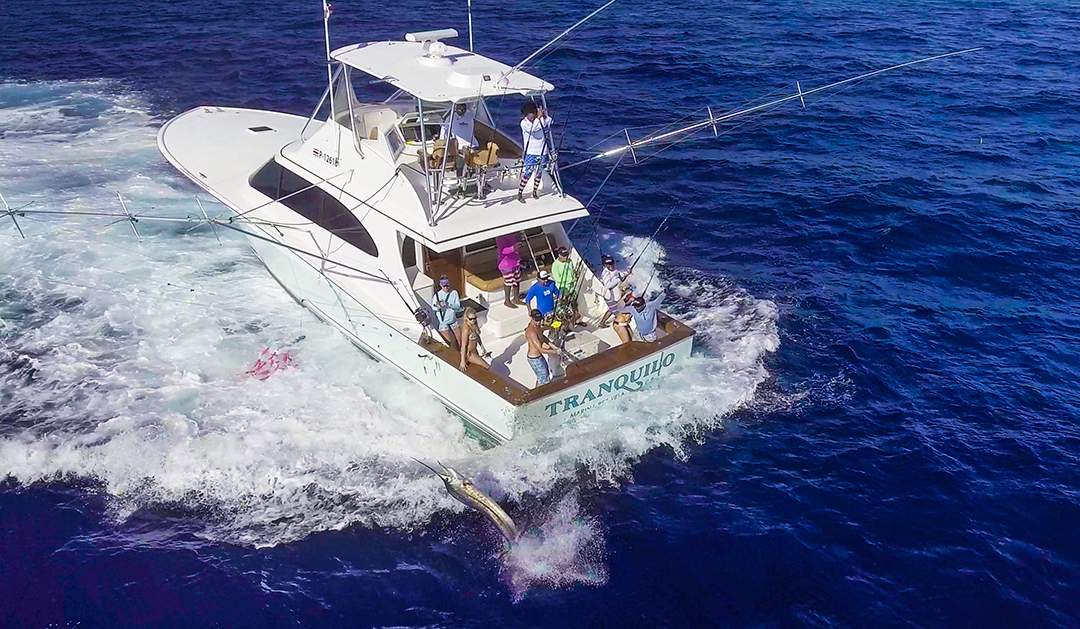 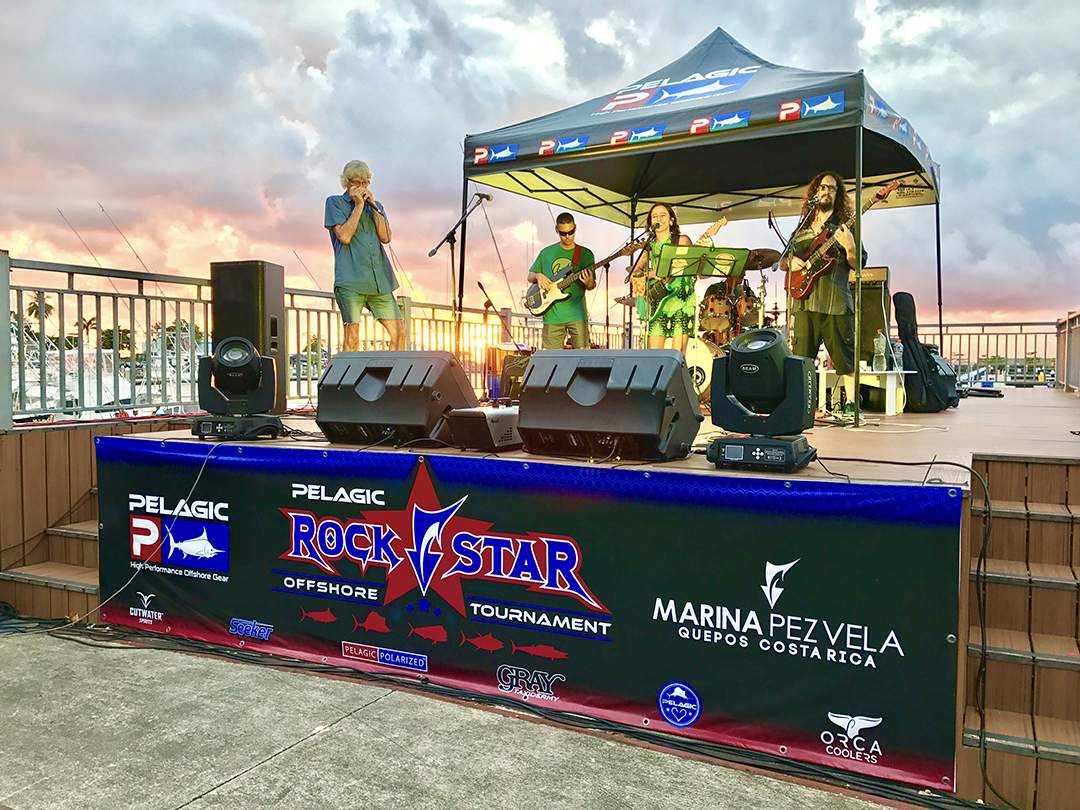 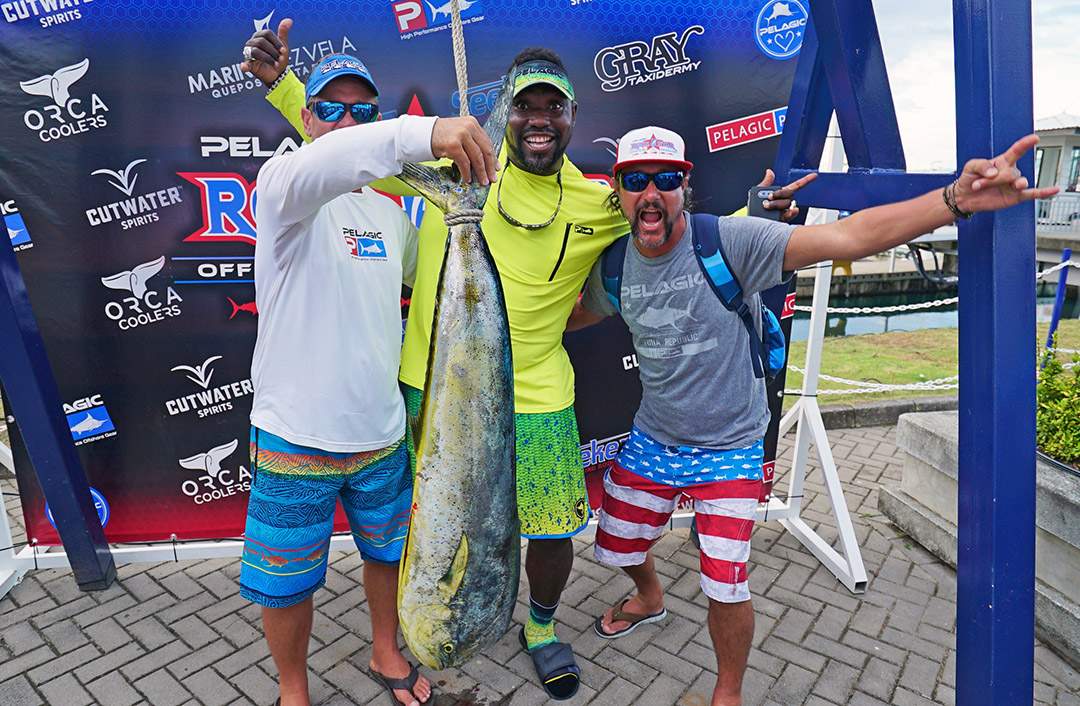 Day two saw a total of 125 billfish released, capped by a tournament-best, single-day score of 1600-points (13 sailfish & 1 blue marlin) and the largest dorado of the day (30 lbs.) by Team Miss Judy , earning them two daily jackpot cash prizes. In the small boat category, both Swordfish and Un Toque ended the day with 500 release points (5 sailfish), a daily jackpot prize that would be split by the two teams. Team Reel Deal took home the daily jackpot for their 28 lb. dorado. 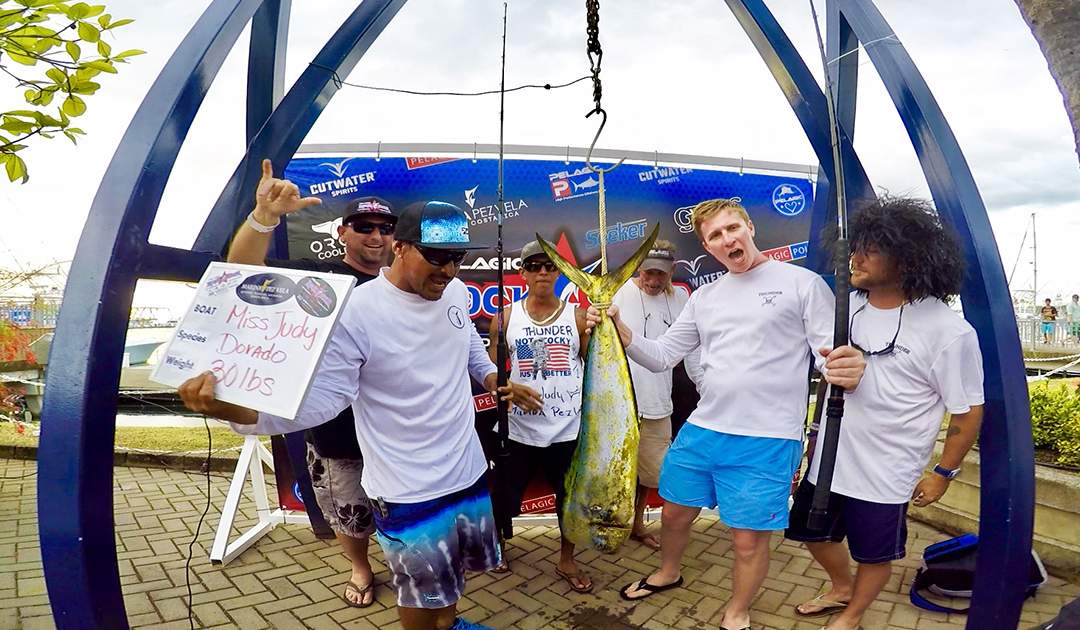 When the dust had settled and all points had been gathered, the tournament fleet released a staggering total 236 billfish, 23 of which were either blue or striped marlin! And, furthermore, of twenty-seven teams entered into the inaugural tournament, ten were awarded cash prizes for their performance.

Below: Tranquilo takes center stage with the biggest check of the tournament 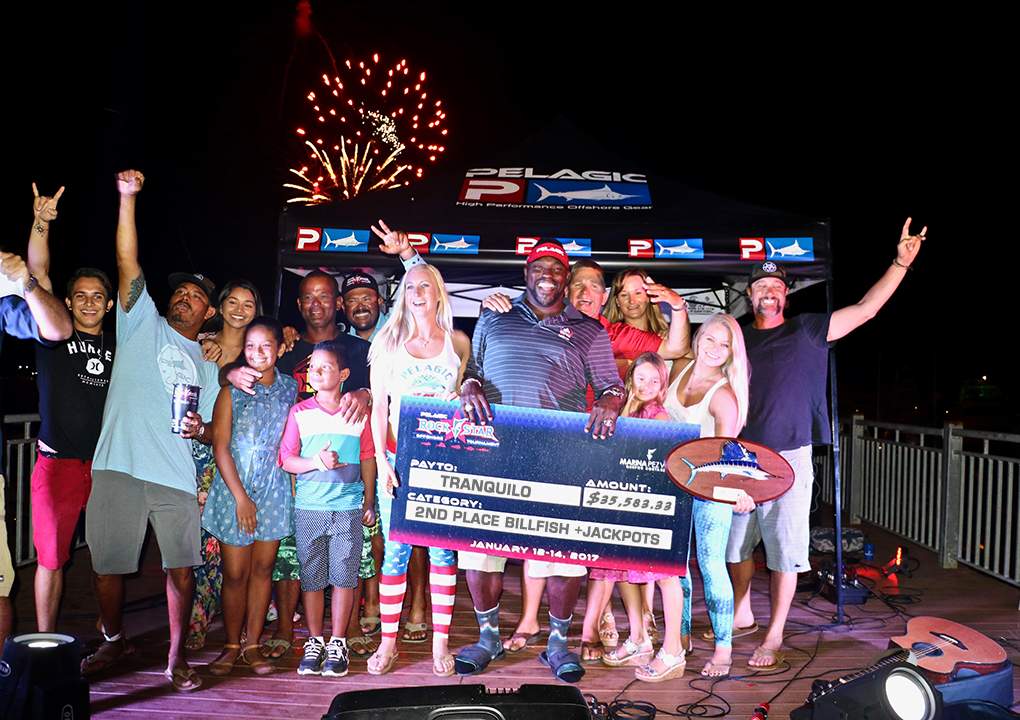 Winning 1st Place in the Billfish Release Division was Team Pescadora with a combined release total of 2000-points (14 sailfish & 2 marlin) earning them a check for $12,413.33. They beat out Team Tranquilo (also 2000-points) by scoring their last billfish release 6-minutes earlier. Team Sea Angel took 1st Place Dorado by scoring a fish on each day for an aggregate weight of 45-lbs (17 & 28-lbs). Combined with a $5K High Rollers Day 2 Jackpot, Sea Angel took home a check for $20,690.00. Scoring the only tuna of the tournament was Team Sea Hawk ; their 17-lb. yellowfin earned them a check for $7,600.00. Congrats to all our First Place winners!

Below: Pescadora took home the billfish crown // Ben White and Austin Angel of Sea Angel rockin' out with their solid bull // Great things come in small packages, like this 17-lb. yellowfin that earned Sea Hawk a nice check 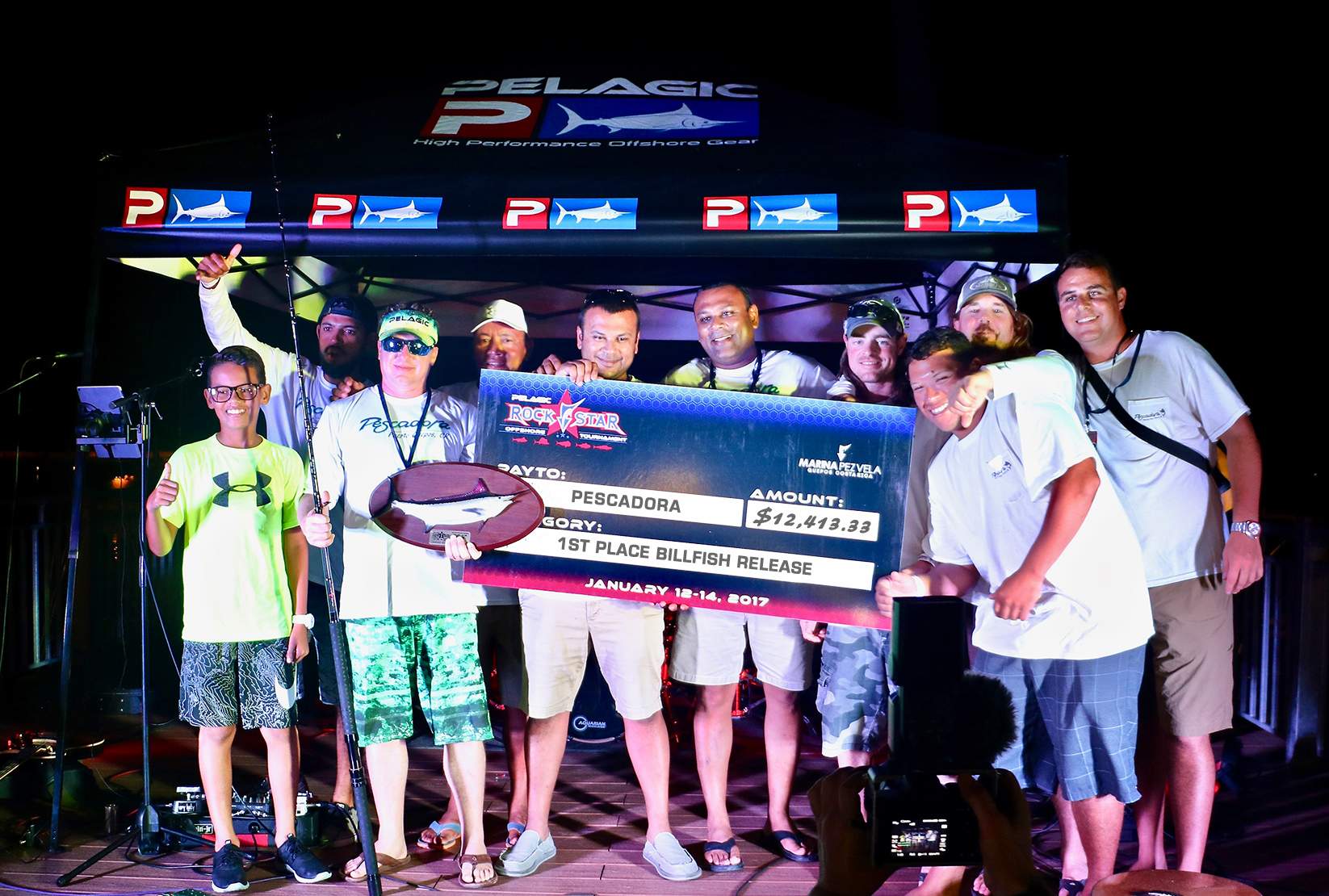 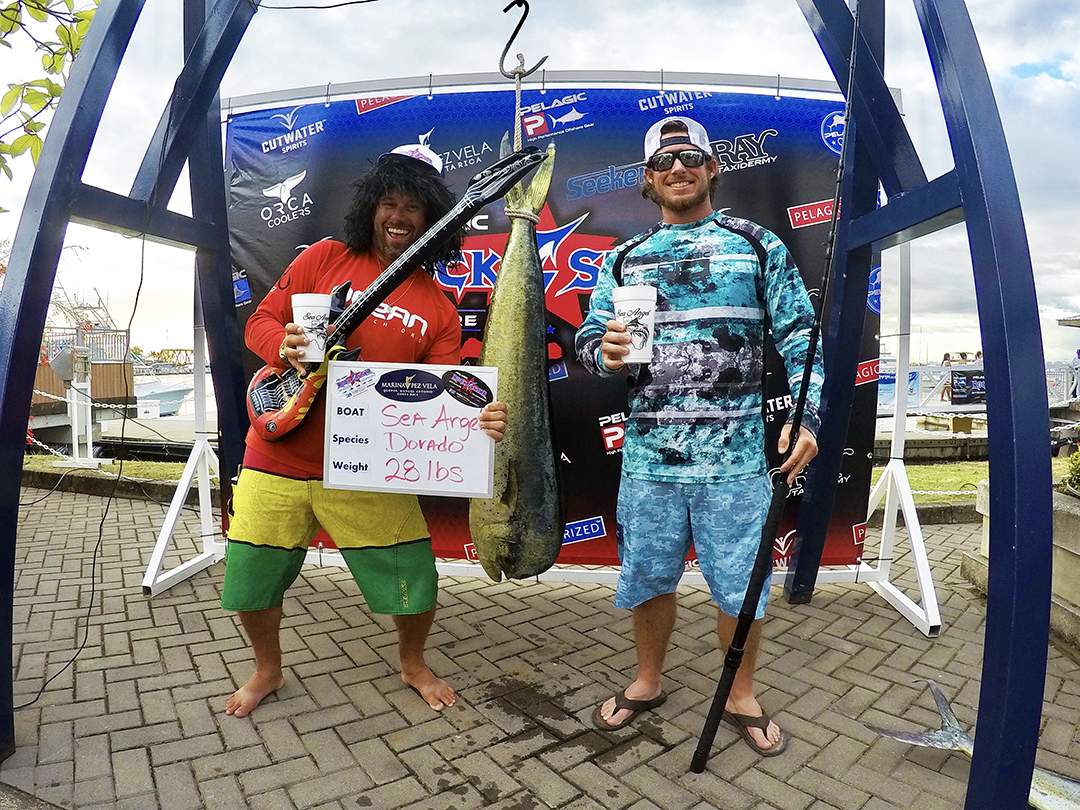 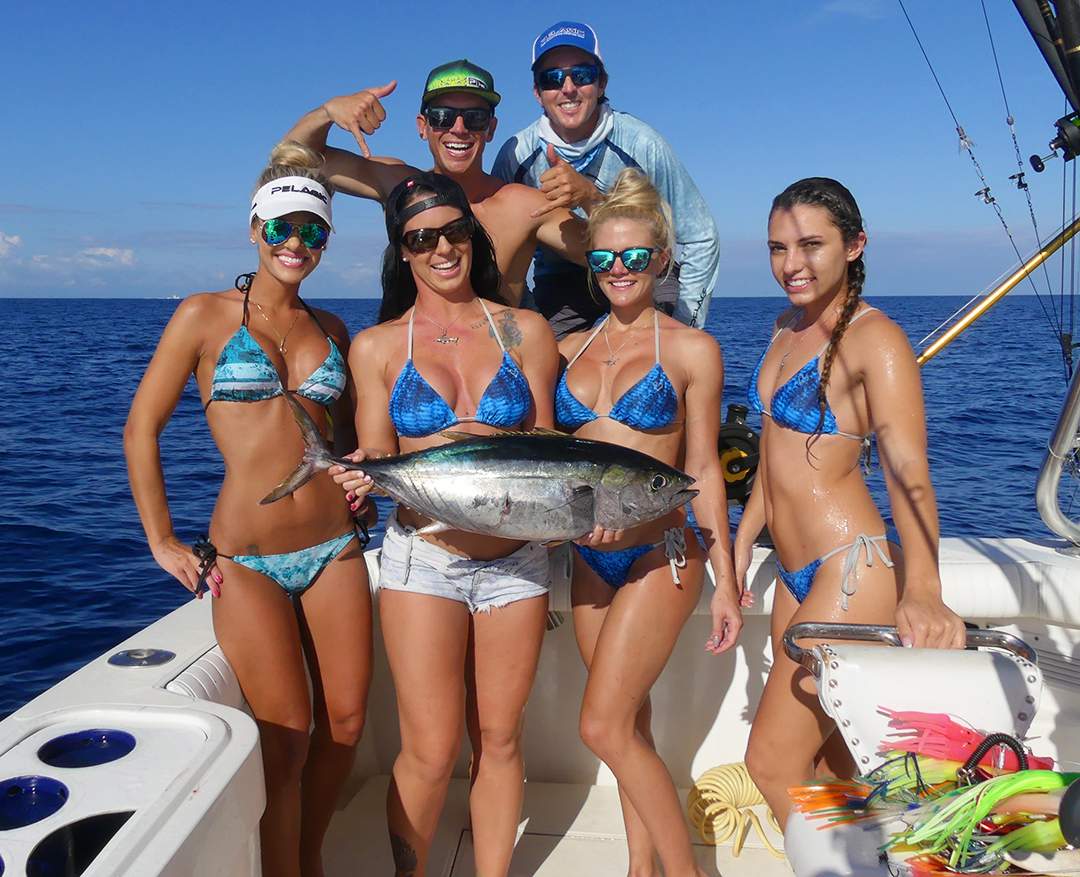 In the tournament’s small boat category, it was Team Good Day that walked away with the Billfish Release championship by scoring 1,000-points (7 sailfish & 1 blue marlin) during the two-day event; they cashed in a check of $6,225.00. Team Reel Deal stole the dorado show by winning the division with a two-fish tally of 45-lbs (21 & 24-lbs). Congrats to our Small Boat Category winners!

Below: Team Good Day and Reel Deal victorious in the small boat category 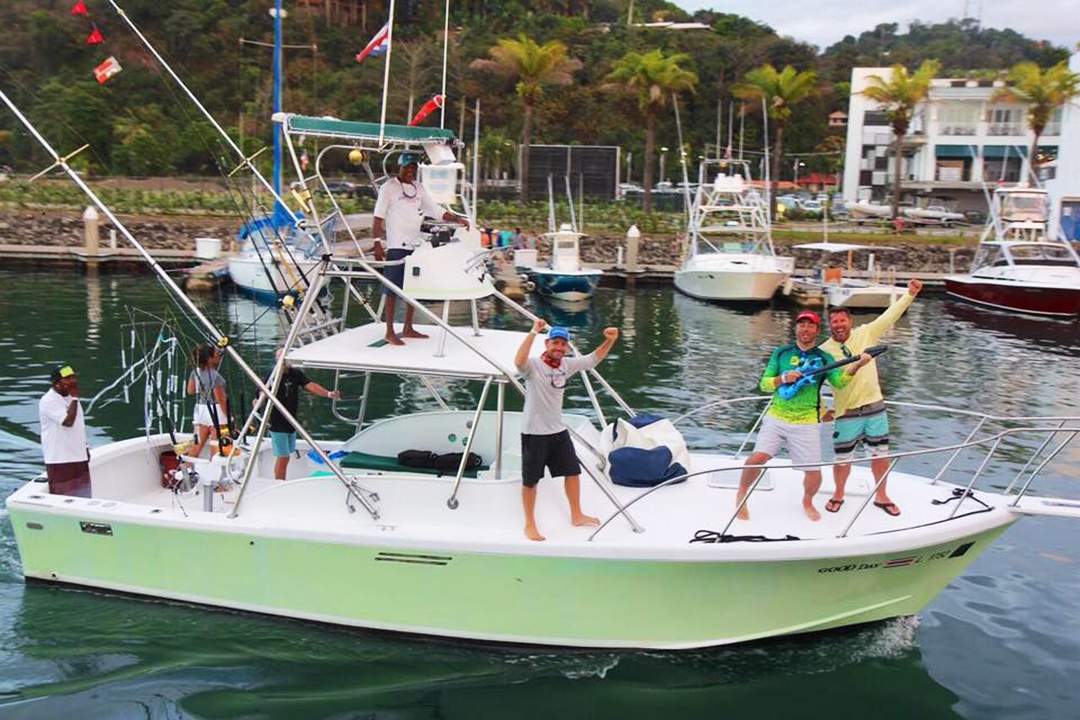 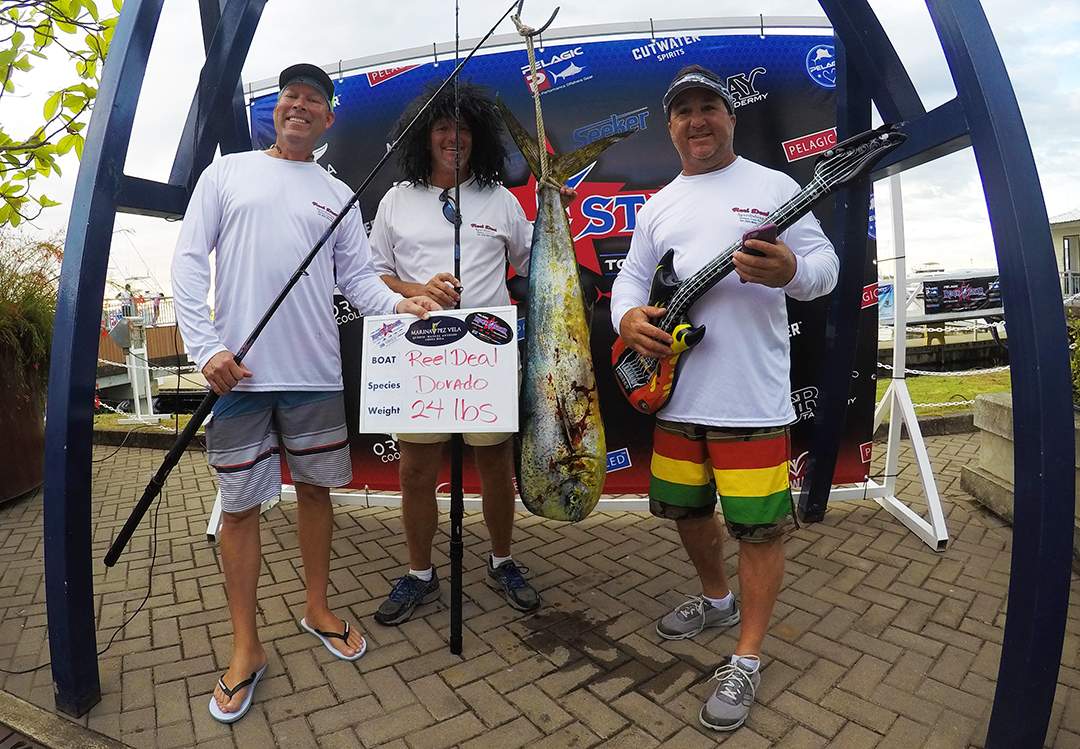 Below: Team Frenzy took home the award for most-fun-had during the tournament 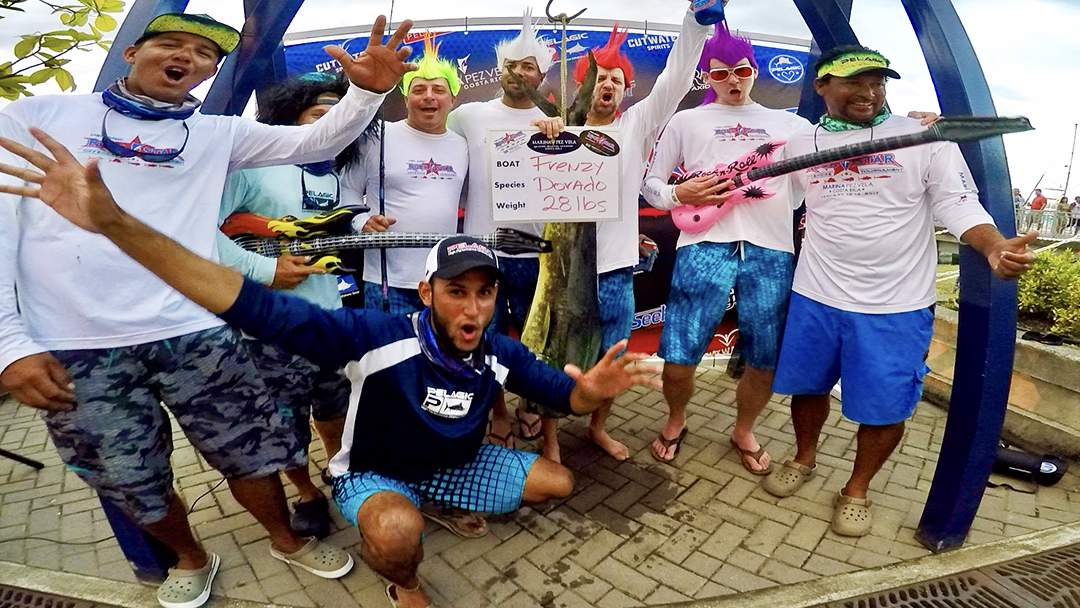 On the event’s final night, all winners were welcomed to the concert stage in tournament village and presented with large ceremonial checks and trophies by Gray Taxidermy. The night was an evening of celebration in Marina Pez Vela, capped with an awesome rock-n-roll concert by Mustang65 that included a fireworks extravaganza and send-off of Queen’s hit track “We are the Champions”.

Below: Mustang65 rocked the stage on the final night of the tournament

We’d like to give a huge THANK YOU to Marina Pez Vela for hosting this great event; to our fine sponsors and friends Seeker Fishing Rods, Orca Coolers, Gray Taxidermy, and Cutwater Spirits for going above and beyond as always to provide some incredible prizes and donations; and to everyone who attended this inaugural event to make it one we’ll soon never forget.

Mark your calendars…. The Rockstar! Offshore Tournament presented by PELAGIC will be returning to Marina Pez Vela next January 11-13, 2018 !