Use Your GPS to Catch More Marlin

My good friend Manfred had just climbed up the tower on the 57' Dean Johnson MAXIMO that I run out of Puerto Vallarta, Mexico to bring me an ice cold gatorade. The late summer humidity was sweltering and the cold drink was a welcome relief from the heat. As i chugged down the beverage, Manfred asked me what I thought our chances were at catching a marlin that day. I pointed to a few closely grouped waypoints on the GPS chart plotter that we were trolling around and told Manfred that over the years those few waypoints had produced incredible numbers of black and blue marlin. I explained that since we had the right water temperature, color, current, and had already seen several schools of baitfish working the area, that conditions definitely looked promising for marlin. No sooner had the words escaped my lips when a 500 pound black marlin annihilated one of our lures and tore off for the horizon at a rate of unimaginable speed.

Below: A hungry marlin slashes at a trolled lure. 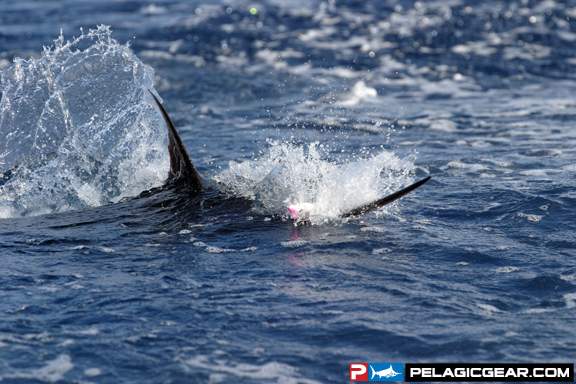 Manfred, who by now was yelling encouragement at the top of his lungs as his uncle strapped into the chair and went to work on the fish, had just learned perhaps the most important facet to catching marlin on a consistent basis - _whenever possible, fish in places where you've caught them before. _

Below: Airborn! A nice black marlin tries to throw the hook. 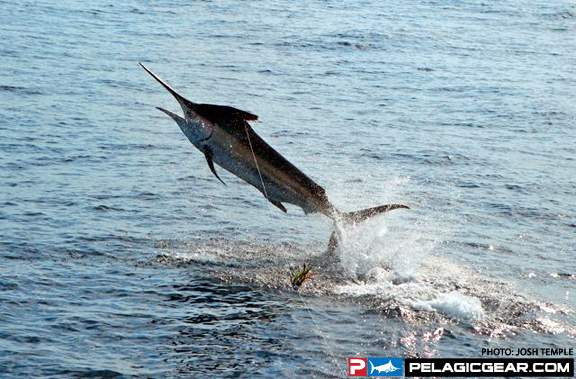 Marlin, despite their inherent wanderlust, are simple creatures of habit and necessity. They require certain water temperatures and an ample baitfish supply in order to survive, and that is pretty much it. If you look at the oceans of the world on a globe, and then eliminate the portions of those oceans where the water temperatures are too cold to support marlin, you are left with a remarkable swath of water in which to target marlin world-wide. Out of that massive global range certain consistencies arise and locations like Cairns, Australia and Kona, Hawaii (amongst countless others) have proven that large concentrations of marlin will return to the same areas year after year. 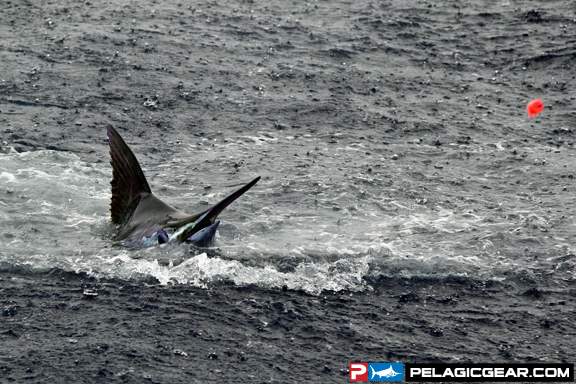 As fishermen, we seem attuned to this general knowledge. But what many fail to realize is that just because you are fishing in a well-known marlin hot-spot doesn't mean you are fishing it effectively. To become a better marlin fisherman you must first understand that each of these locations harbors hot-spots within the area that are going to produce marlin more consistently than others. It's finding these areas and keeping track of them that is going to make you a more successful marlin fishermen, _and one of the best ways to do that is mark every location you raise a marlin with a waypoint on your GPS chart plotter. _

Below: Two blue marlin put on an aerial display. 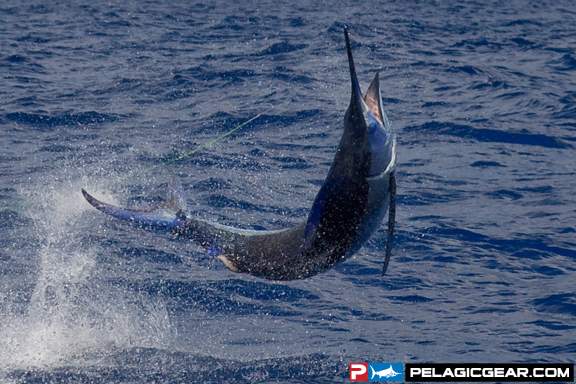 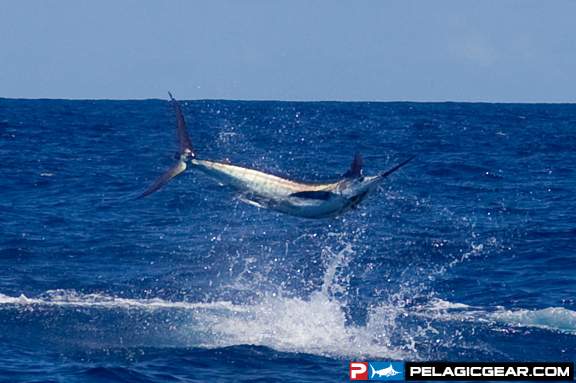 It's simple science, but it's often surprising just how few fishermen take the time or think to do this, particularly when you consider how important it is in marlin fishing. For some crews, trolling around without any thought or care to where they've caught fish before might account for enough success over the season to keep them happy, but I can guarantee you one thing - when it comes time for adding up the numbers at the end of the season the crews that have put the extra effort into keeping catch records are going to boast better marlin numbers every time. 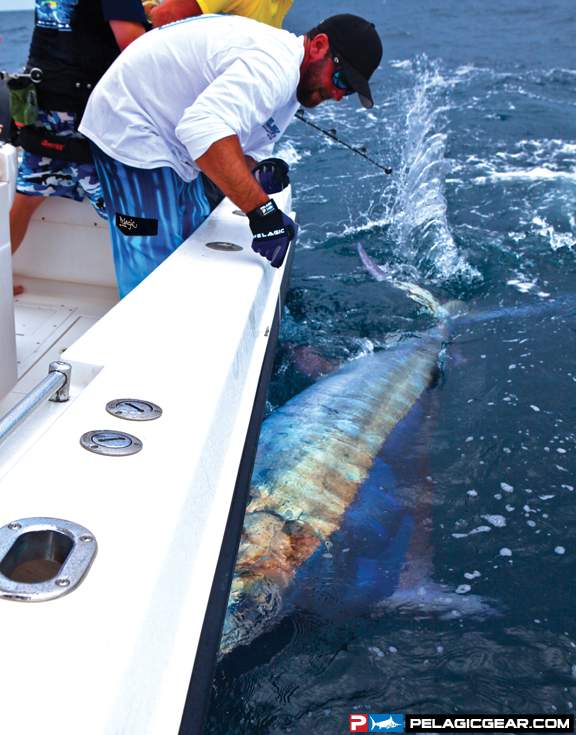 A very good example of a hot-spot within a hot-spot is the particular area I mentioned fishing with Manfred earlier. After countless hours of trolling up and down the 1,000 fathom curve off of Puerto Vallarta over the years I realized that a certain stretch of the edge was consistently producing more marlin than any other spot along the curve. Thanks to the simple fact that I always create a waypoint when i hook a marlin, it only took a few seasons to prove that over a 50 mile stretch of the 1,000 fathom curve that i regularly troll, one scant 5 mile area produced over 75% of the fish. Think about how much time I save in my day to day marlin fishing now that i know where the most consistent concentrations of marlin are going to be found in my area. All it took was simply punching in a waypoint every time I hooked a marlin and allowing time to pass and patterns to appear.

Below: A blue marlin ready for release. 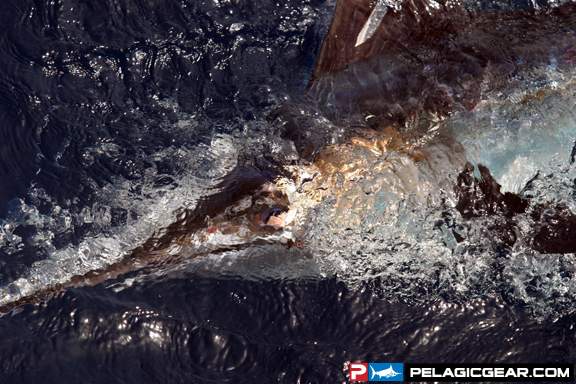 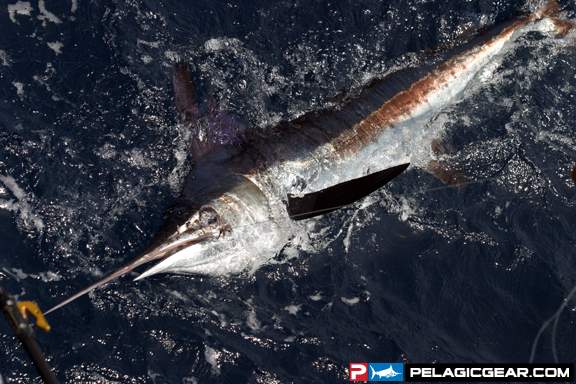 Of course this is a very simple way of keeping track of marlin migration and feeding zones in your local area, but it's perhaps the most effective tool in your log. Just like real estate, productive marlin grounds are all about location-location-location! Start by keeping track of locations where you raise marlin, and then add further information like stage of the tide, moon phase, water temperature, and so on. Over time you are going to see patterns develop in your local area and you'll be able to reference these consistencies to maximize precious daylight efficiently during your fishing day. I've learned that blue marlin in our local area particularly prefer the last few hours of the incoming tide, and will often bite best right at the high slack. This information lets me structure my day to include hitting some of my favorite marlin grounds at precisely the right stage of the tide, ensuring that I am fishing in the best possible location to catch a blue marlin, at the best possible time.

Below: 3-2-1 Blast off! A chunky black marlin launches in front of the camera of Josh Temple.

Start using your GPS to keep track of marlin bites in your area, and it won't be long before you develop your own hot-spots to maximize your time and effort in search of marlin. Good luck out there!!!

Pelagic Pro Team Captain Josh Temple is from Tofino, B.C., but spends most of his days running charters in the fertile waters of Puerto Vallarta and Panama. Visit Capt. Josh on the web and follow his blog at www.PrimeTimeAdv.com