Southern Belize: The Other, Less-Traveled Side of Paradise 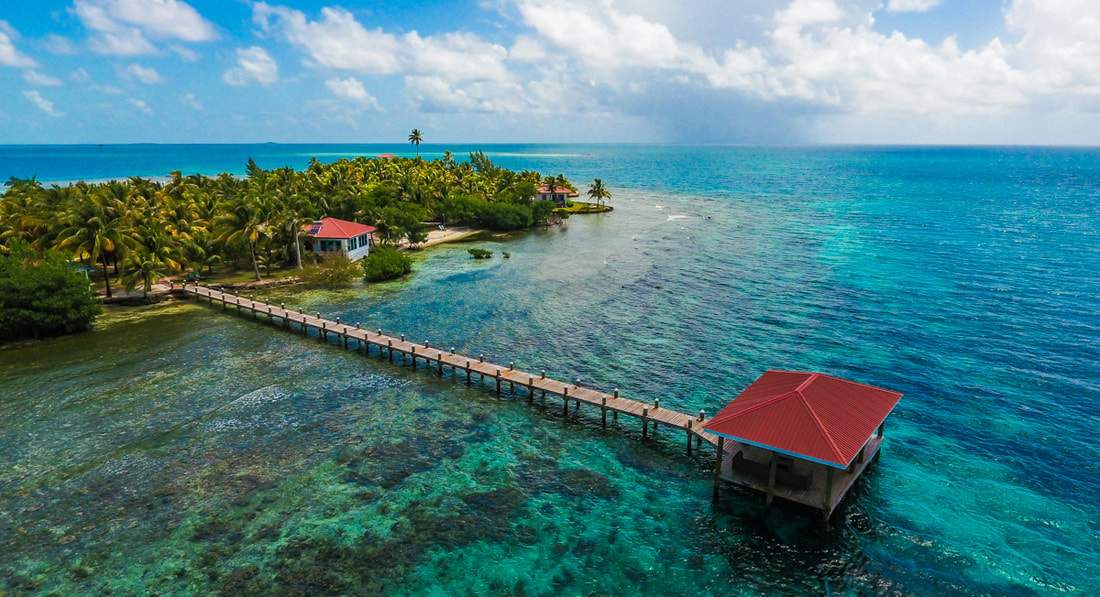 When the subject of Belize comes up, it’s not uncommon for people to talk about their adventures to areas like Ambergris Caye, San Pedro, and the Blue Hole. These destinations have long been bucket list material for people exploring central America from the US, and for good reason; they are stunning examples of the average person’s idea of "paradise" – Crystal-clear waters, the largest barrier reef in the Northern Hemisphere, and at first glance world class fishing. But when one takes a closer look at Belize on a map, the true nature of this wild country becomes more apparent. To the south of these well-known tourists hot spots there is an entire, far less trampled region just waiting to be explored by the discriminating angler who seeks genuine adventure and abundant targets. 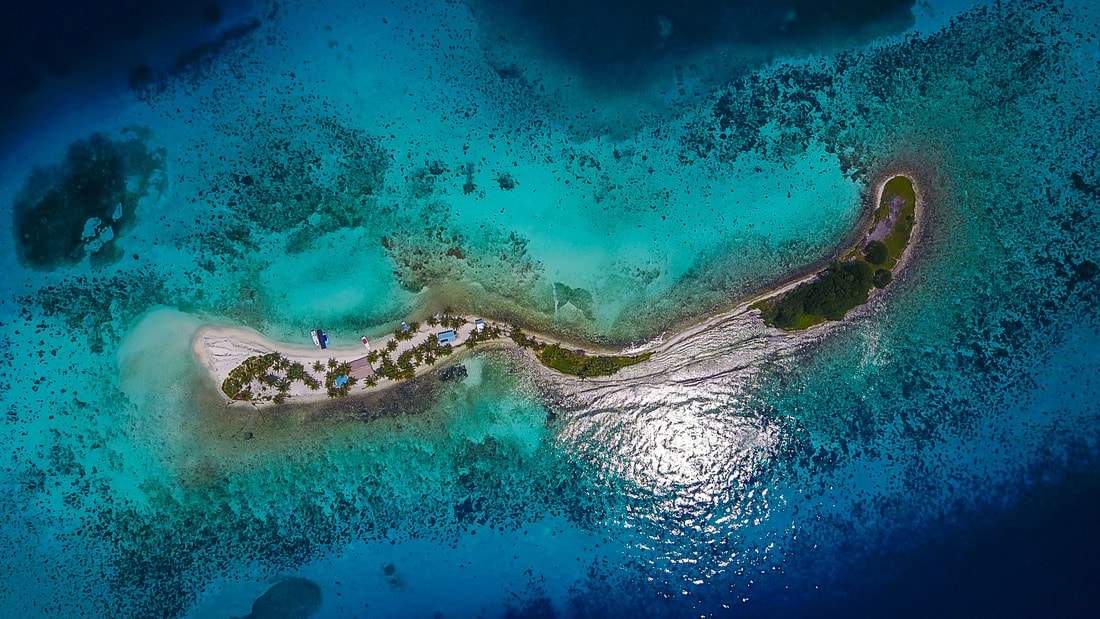 Laughing Bird Caye is a protected island off the coast of Placencia and a heavenly spot to dive beneath Belize's crystal clear waters. photo: Sean Sullivan

For the past 18 months, I've been making regular trips to this region as part of a documentary film project examining the effects of cruise ship traffic in this ultra-pristine Southern region of Belize. My homebase during this series of visits has been the multi-generational fishing village of Placencia. 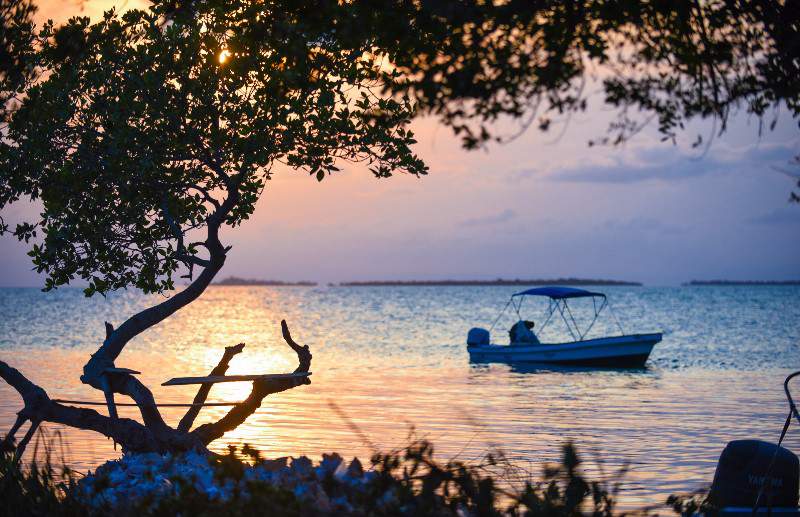 Sunset on the cayes is never a dissapointment. photo: Sean Sullivan

Located on the end of a long narrow peninsula, over the years, through hard work by locals and expat alike, Placencia has taken on a reputation as a chill spot to experience the relaxing, less touristy side of Belize. But more than a place to hang a hammock, Placencia has also established itself as the perfect launch point to explore the southern cayes and barrier reef. 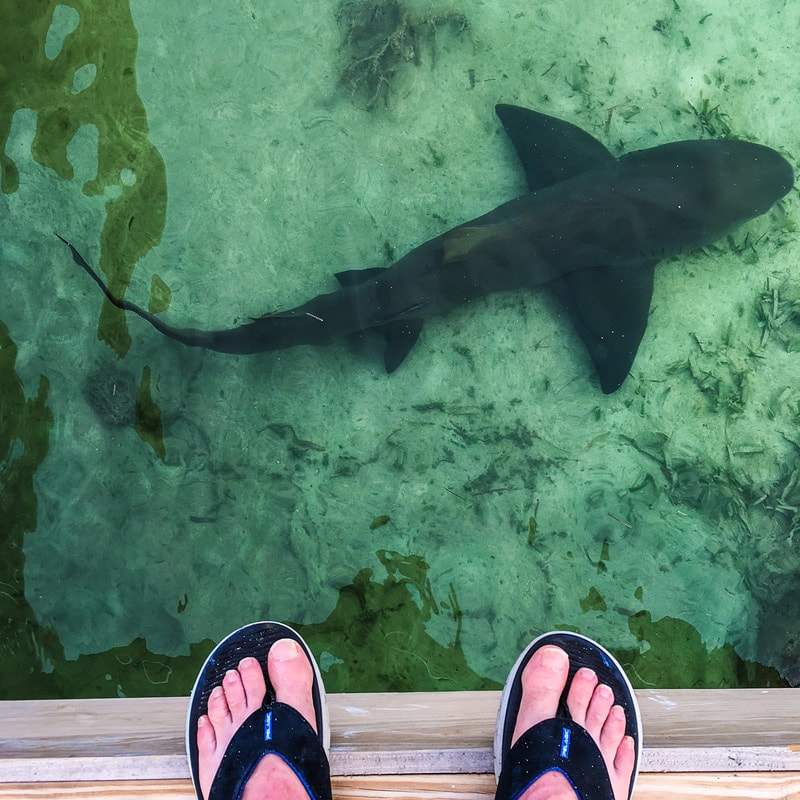 Sharks are an ever-present reminder on the reef that mother nature is in charge out here, we are only visitors. photo: Sean Sullivan

Norwegian cruise lines recently moved their entire cruise operation to a new island base 3 miles south of Placencia on a new amusement park/island port called Harvest caye. While there is much to be said about this unfortunate turn of events, (bringing 3 times Placencias population to the region by ship 4 times a week), we're going to focus here on both the amazing fishing opportunities of this region as well as the unexplored potential of the outer blue water, 50-100 miles off the mainland coast. It’s fair to break up Belize fishing prospects into three different objectives, Inner Reef, outer reef, and blue water. Some consider the waters just outside the barrier reef to be "blue water", but from my experience this fishery is distinctly different from that of the "true blue" one finds out near Glovers reef (35 miles beyond the edge of the reef) and beyond. 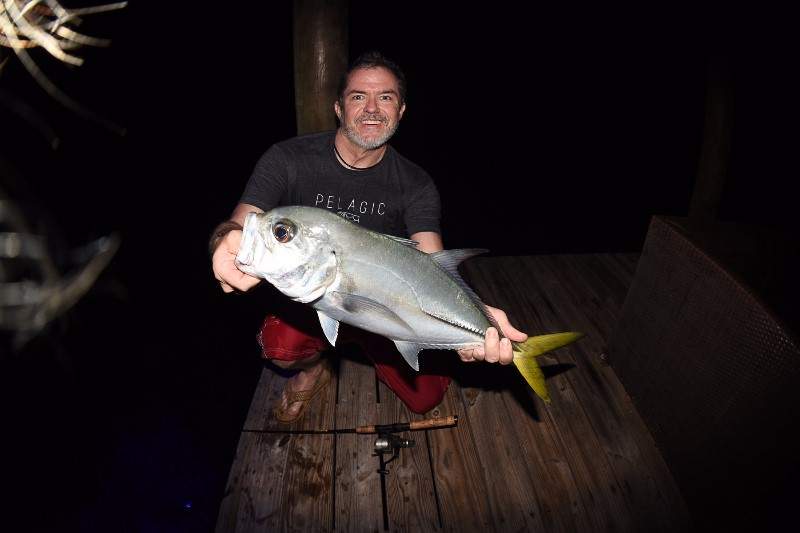 This chunky Horseeye Jack hit a plug in the pitch dark out on Hatchet Caye and put up a battle on 8-lb test! Photo: Marisa Anthony

This includes all waters from the mainland to the inner edge of the barrier reef approx 25 miles out. Here the water is crystal-clear, and rarely drops deeper than a couple hundred feet. This is the kind of fishing that Belize is most known for, primary sought after species include Tarpon, Permit and Bonefish; and often fished on the fly. One remarkable thing I came to understand from the guides I worked with, was that these fisheries are generally not seasonal affairs – these species are present in varying numbers all year round.

Big migrating Tarpon can be found around the outer cayes at various times of year and are a worthy adversary for those who can coax them in! photo: Sean Sullivan 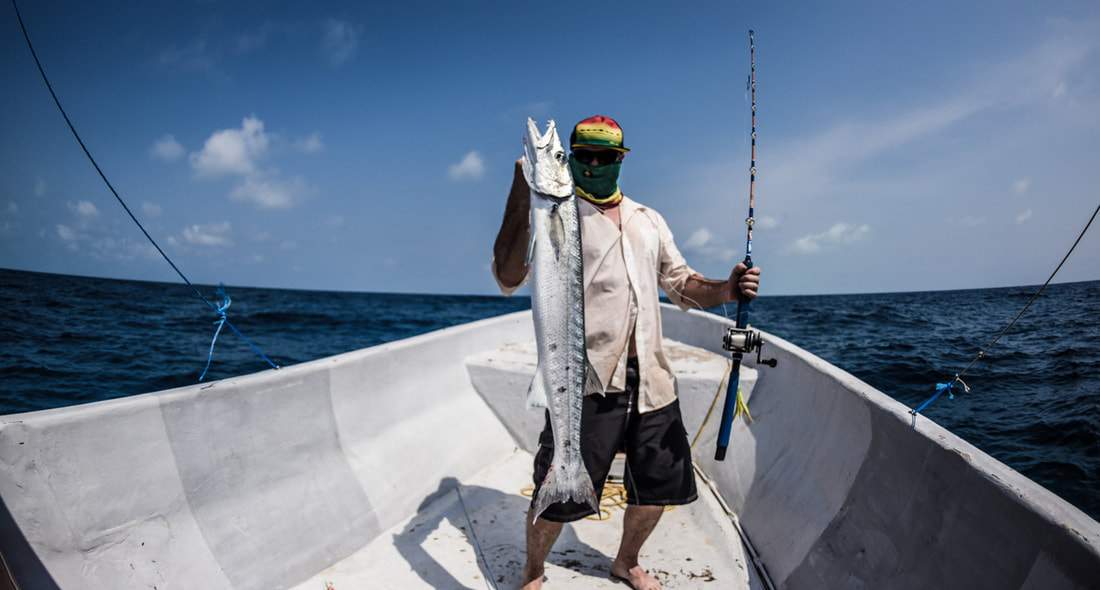 A log Barracuda for the author. photo: Randy Tucker

Pursuing the grand slam of these inshore species is mostly about tide and moon cycles. The two hours prior to high tide are known here as the Permit tide and is considered prime time for pursuing these shallow water predators. Most fishing is done on shallow flats or tidal lagoons, each species having their own unique techniques as well as frustrations. 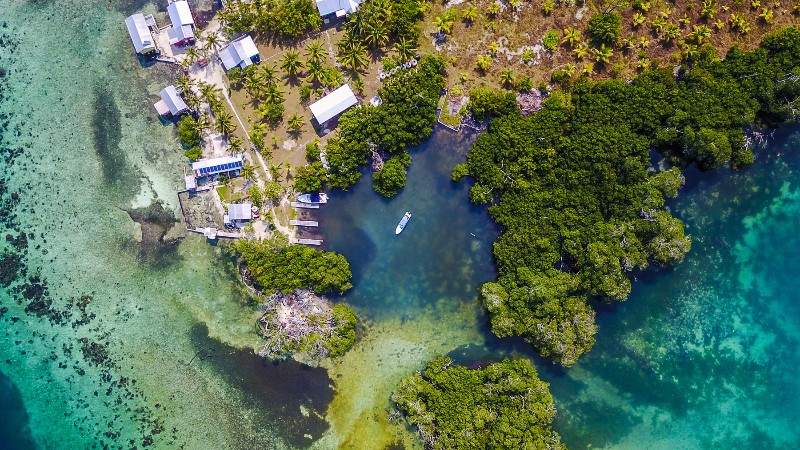 Lagoons like this one near the reef edge can be loaded with Tarpon on an incoming tide as they push baitfish into the shallows. Matching the tiny baitfish is key here, as is wicked sharp hooks. photo: Sean Sullivan

This is the water that marks the interface between the calm shallows of the inner reef and the deep blue. On the Ocean side of the reef, the bottom drops away thousands of feet and the waters are exposed to the energy of the open ocean. Most fishing here is done against the reefs outer wall. Species include big Snappers, Barracuda, Grouper, as well as topwater predators such as King Mackerel, occasional Wahoo, and school-size Tuna. This is also a known area for Whale sharks that follow these schools of Tuna in close as they push baitballs against the reef. 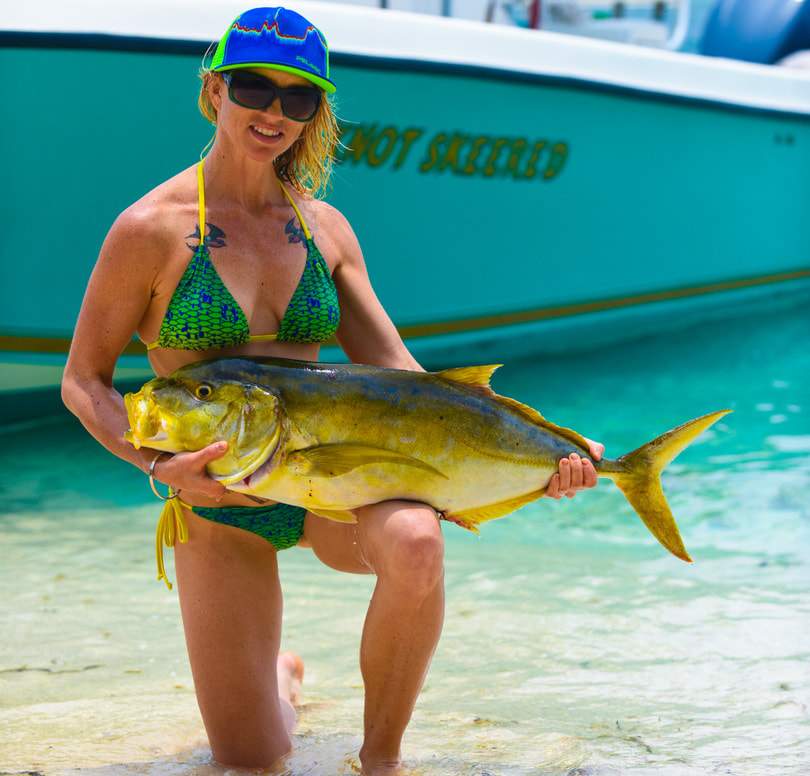 Marisa Anthony took the big fish of the day on this trip – a nice 20-lb. class YellowJack. pic: Sean Sullivan 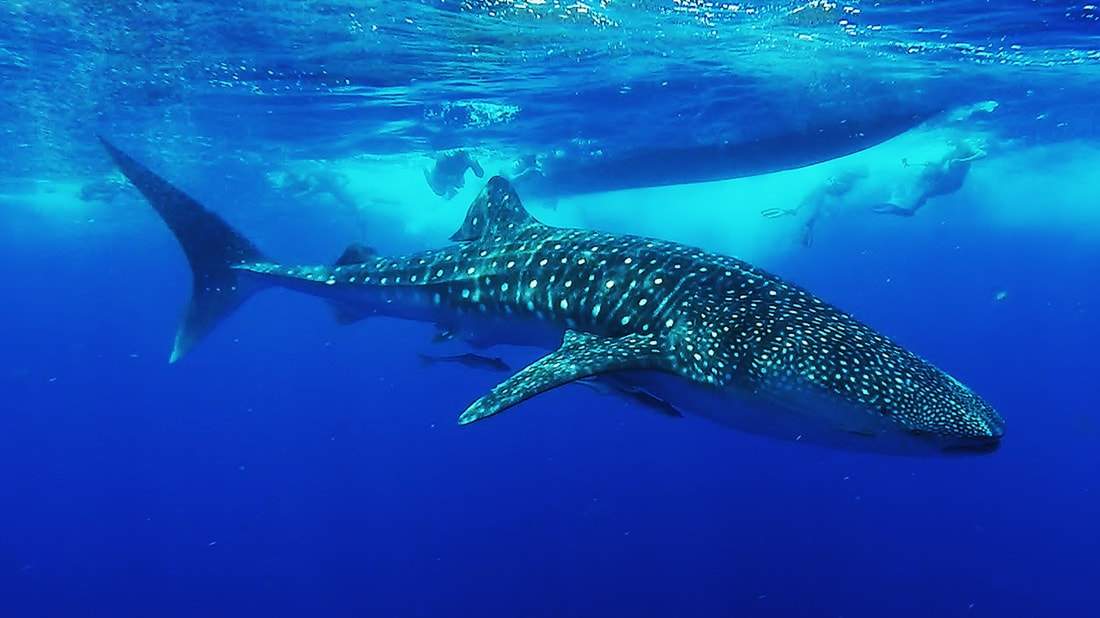 During the Spring snapper run just outside the reef, Whales sharks congregate to feed on the rich microflora that blossoms here. photo: Sean Sullivan

The tuna here are generally small – 5-25 lbs – as are the Wahoo and other topwater game fish. The bigger models reside out in the deep blue water 30 or more miles out from the edge of the reef. Despite this being a "blue water fishery" by name, most of the species pursued out here are not the typical game fish listed above. Anglers out here are on the hunt for big snapper, abundant school-size tuna, big Barracuda, etc. 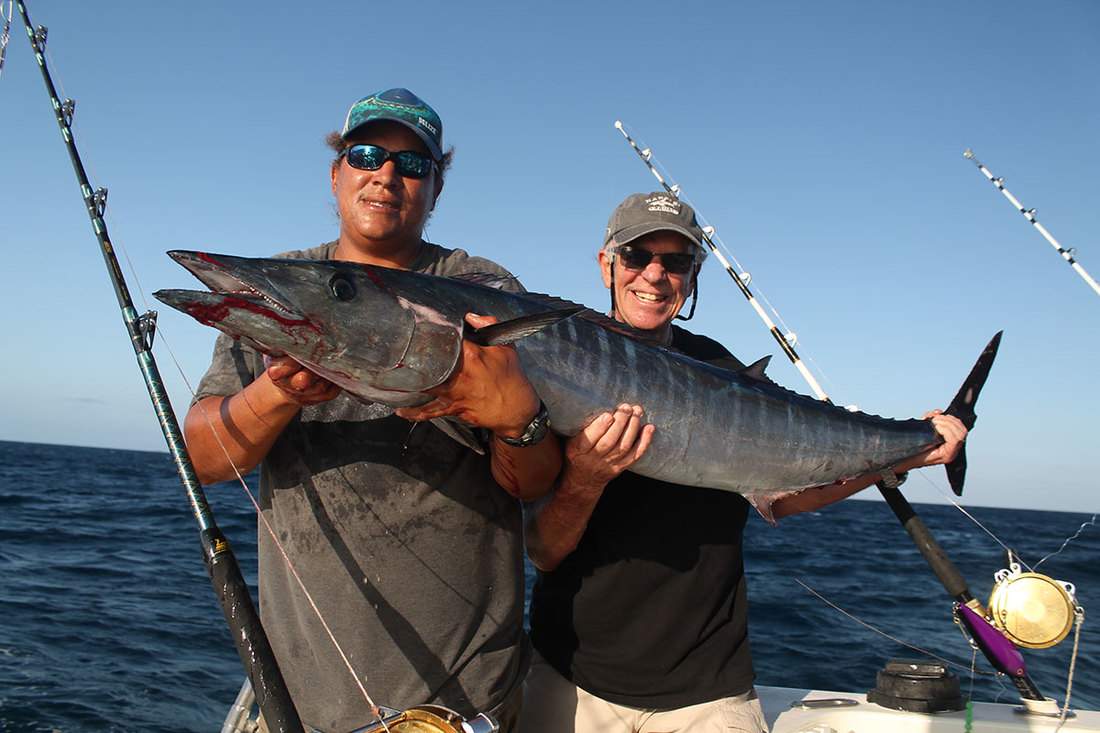 While Wahoo can be found throughout the outer reef zone, the bigger models like this slug are generally found out past Glovers Reef, 35 miles from the reef edge; and beyond. Image courtesy Polly/Bluereefadventures

While the region just outside the barrier reef is indeed considered "blue water" by many, the Realm of big game doesn't truly begin until one is well past the reef. Pushing out 35 miles from the edge of the reef and more than 50 miles from the mainland is Glovers Reef. This large tropical atoll is surrounded by deep drop offs reported to be fertile grounds for bigger tuna, wahoo, kings, as well as marlin and sailfish. While all these species have been caught out here, the truth is this region is still a relatively unexplored fishery. 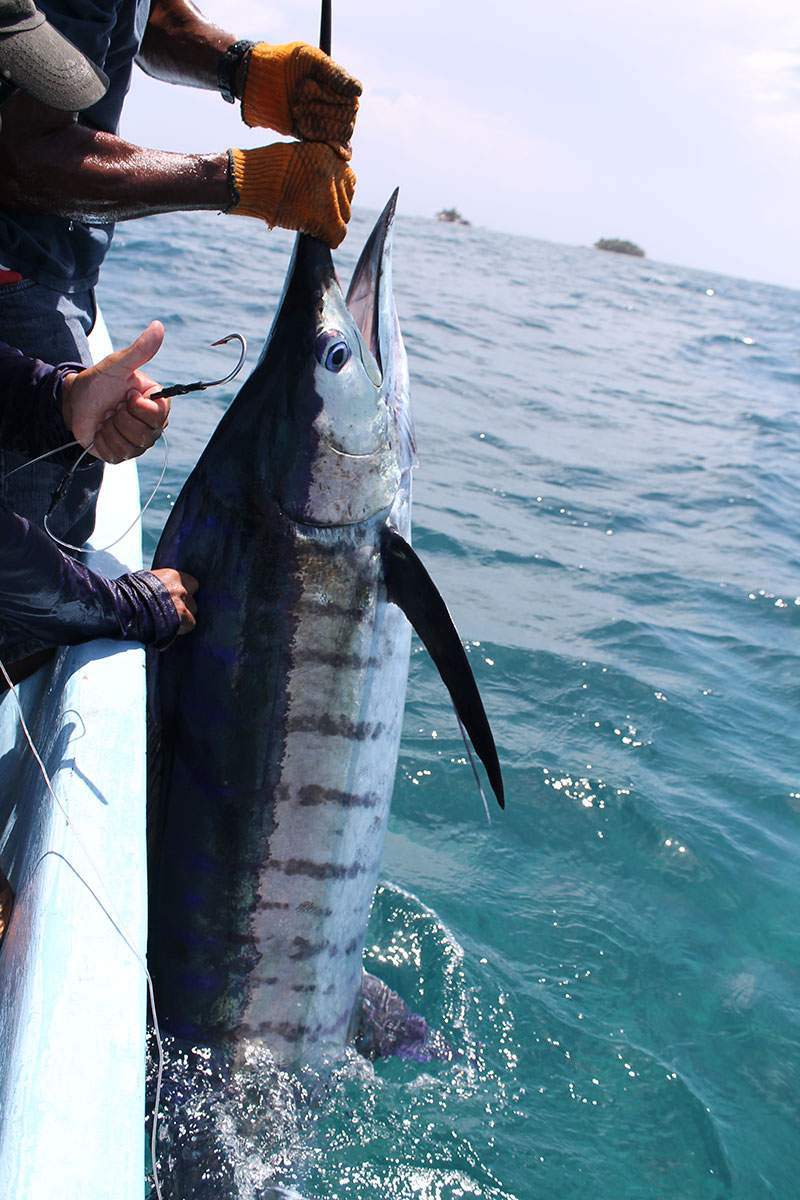 The Gulf of Honduras is an unlikely spot for a Marlin fishery, but during certain times of year a variety of Billfish species congregate in large numbers within the relatively unexplored circular current that flows here. Image courtesy Polly/Blue Reef Adventures.

The potential is here for big fish as we've heard reports of blue marlin up to 600+ lbs, but Belize lacks the infrastructure and fisherman to support a full-blown big game fishery here. A reason for this might be the long distance one must go to get out to the most fertile grounds which generally start at 60 miles out from Placencia. But to the angler in search of rare waters, the cobalt blue outside holds untold monsters! 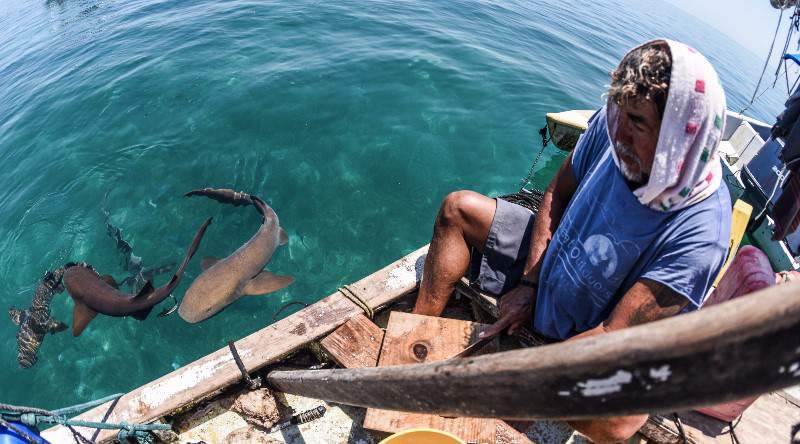 When local gypsy fisherman clean their catch out on the reef, it makes for stellar snorkeling as all kinds of reef dwellers come in to feed. This can include turtles, big rays, spotted eagle rays, and big groups of nurse sharks. photo: Sean Sullivan

One of the great things about fishing in Belize is the local people. Nowhere in the world are you going to find a friendlier more knowledgeable group of locals. Placencia has been a fishing village since it was first established decades ago, and its population has been relying on fishing as their means of survival since the beginning. The elders here have seen it all, and in turn continue to pass this information down to the new generation. 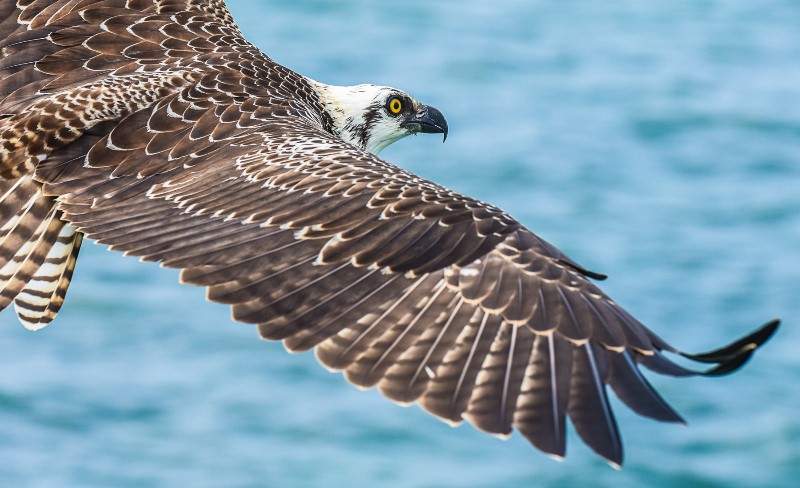 The Belizean Osprey is an apex predator on the reef and one of the only foes of fish like Permit and Bonefish; bringing death from above on the flats. photo: Sean Sullivan

One of the best places to stay out on the water is Hatchet Caye. Sitting 25 miles off the mainland and just a mile from the edge of the barrier reef, Hatchet puts you square on ground zero for any kind of fishing you choose to pursue. To learn more, check out www.hatchetcaye.com . They can also get you to the Blue water zone out past Glover Reef with their larger boats and knowledgeable guides. 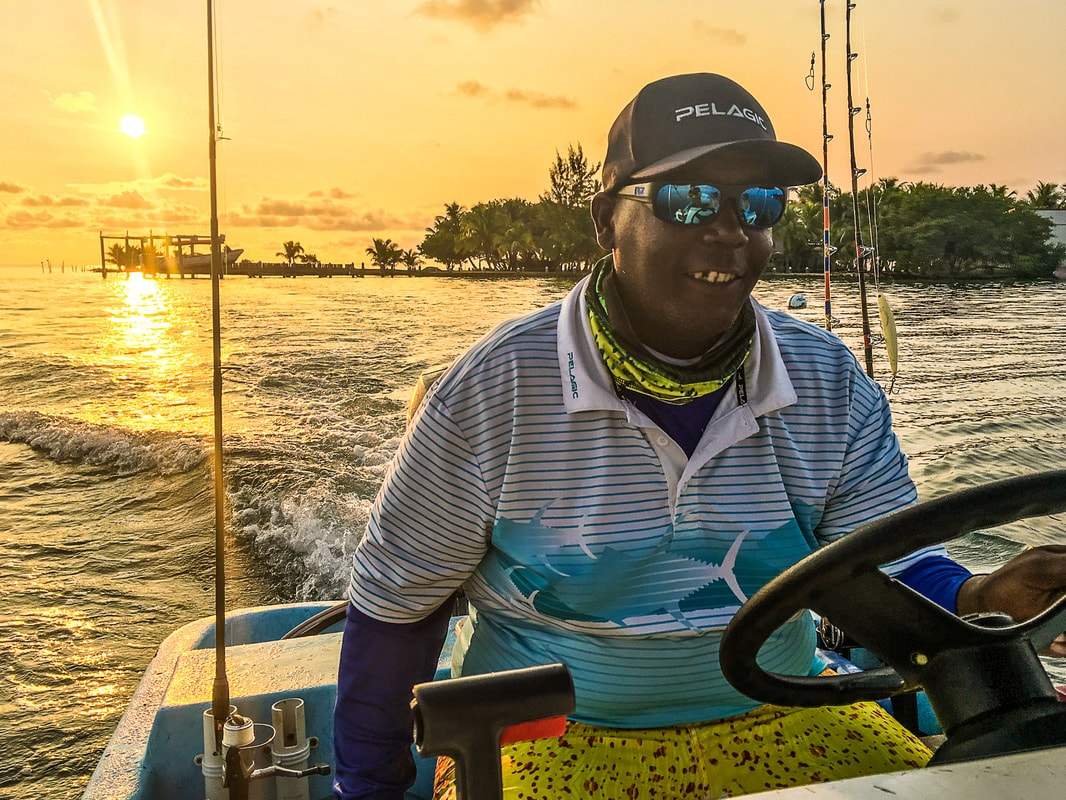 Randy Tucker is one of Placencia's most knowledgeable all around guides and facilitators, he can be reached through Warren At Sunny Side tours. Photo: Sean Sullivan

If diving and exploring the local islands is of interest to you, one of the best in the biz is Warren over at Sunny Side Tours. these guys are super nice people and really know the area, check them out at https://www.facebook.com/sunnysidebelize/. For fishing inside the reef, one of the most noted guides in the county resides in Placencia. Eworth Garbutt has been awarded Belize Fishing Guide of the Year on several occasions. Along with his brothers, he operates Garbutt Fishing Lodge to the south in Punta Gorda. www.flywatertravel.com/destination/Garbutts_Fishing_Lodge 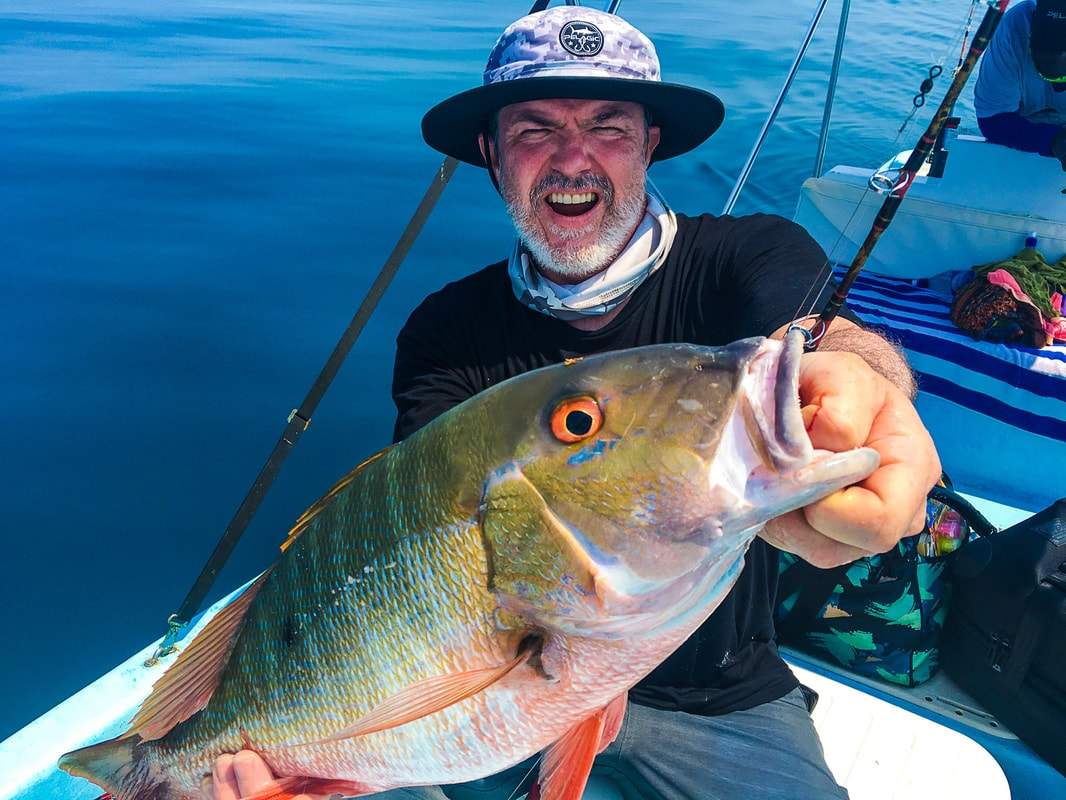 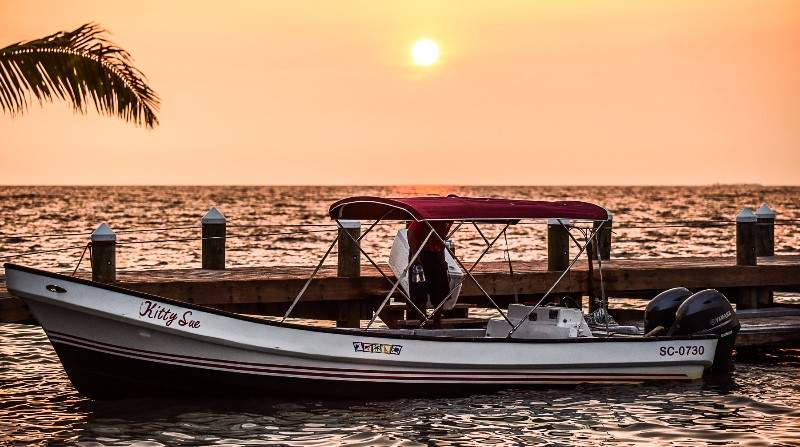 For true Blue water adventures, there is one outfit in particular that specializes in trips to the outer zone. Bluereefadventures.com are well-armed with a large boat and the gear, and knowledge to target the region’s biggest game species. Objectives include blue and white marlin, dorado, big kings, larger tuna and wahoo, as well as trophy amberjack.

Check out more work from the author at www.sulliphotos.com .