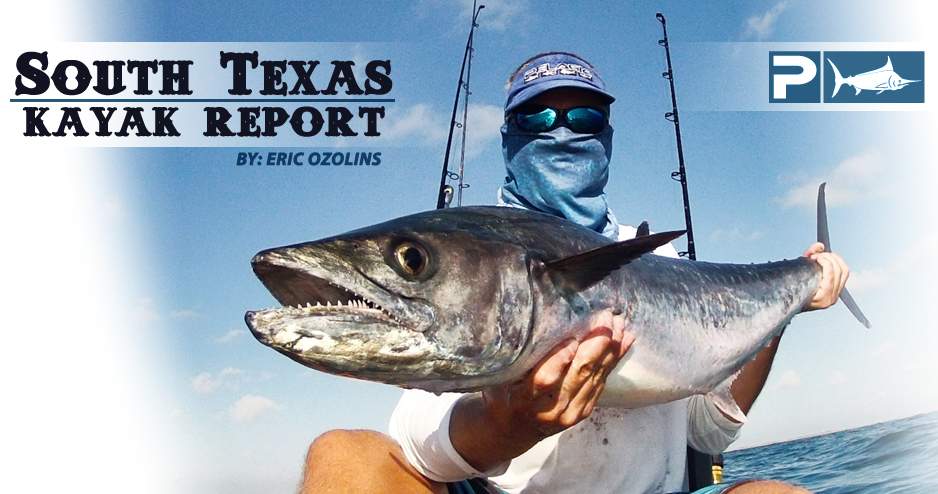 Been hard at it getting into various action... So, here we go with a general wrap-up review/pictorial of the past few trips...

It took a while but after the disappearance of all the sargassum seaweed and cold dirty water, things began to heat up... literally. Daily highs in Corpus Christi were near 100 degrees for much of August and hit a new all-time high of 107. Add the humidity and that is unbearably hot. Since shrimp season my fishing has been 99% in the kayak. I like to take a break in the peak of the summer heat and just get out on the water since the sand is just annoyingly hot. And take to the water I (we) did. Kevin and I have been hard at it since late spring getting impressive and new underwater video deemed EC Classified for the time being. I can't spill the beans at the moment about the things we've captured on video but let’s just say you won’t a need 'goliath' mindset to appreciate the awesomeness of it.

Below: The start to a good day on the water // Oz takes his "fighting stance" on the 'yak 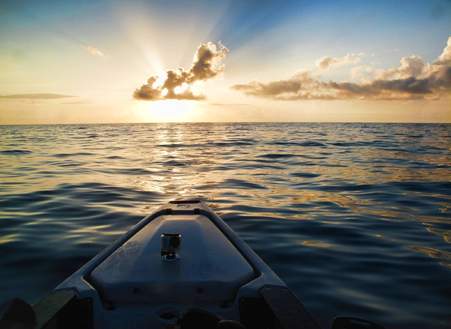 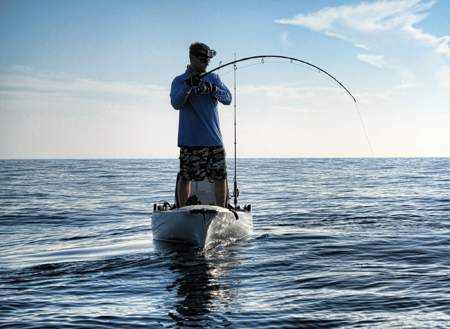 We've kayaked many rigs, open areas, and structure this year thus far and seen certain rigs really come to life, while others may soon be pulled from the gulf (thanks Obama...). I've spent a lot of time chasing the birds and this year I've caught more Little Tunny from the yak then I've ever caught in my life - if only they were sushi grade like their cousins...

Below: A kingfish succombs to the topwater plug // Little Tunny 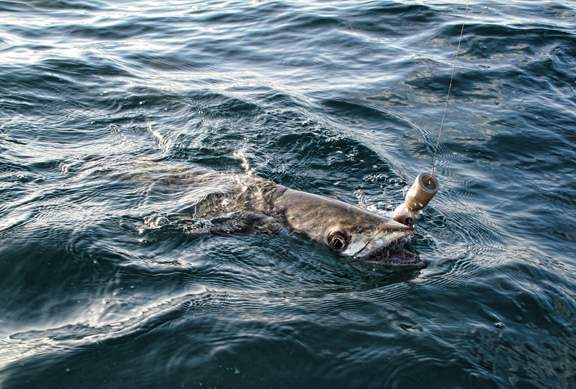 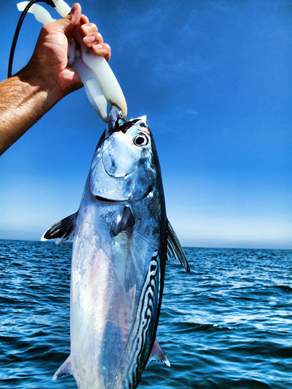 Like last year, our group has been consistent... mainly my bros Brad, Kevin, and myself... and sometimes Steven and Ryan. This year there really were no out of the ordinary 'stellar' catches, just really solid fish. I did catch my first soapfish and African pompano from the kayak though, which was pretty cool. I also got my first yak-tripletail. Kevin and I did slightly lack on the king mackerel production this year due to video priorities and goals. However, we did catch a good number all on artificial. The largest of the Kings we nailed this year were only around 30-35lbs versus the monster toads from the previous year. We did see decent size sharks but not in the numbers as the previous year either. Only until now did we get an influx of blacktips and that is due to the anchovy chaos on the beach right now. 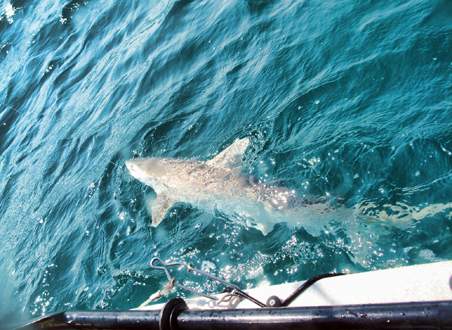 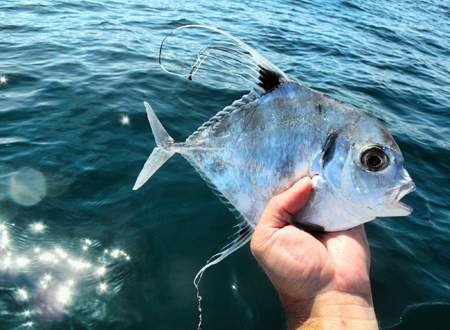 The rigs produced quite a few ling so far and we saw some mega studs. Certain rigs also produced some healthy snapper despite last year's red tide. I briefly fished the Mansfield jetty in the kayak but know of others who have had success especially with tarpon. The conditions were fair and sometimes good down at the jetties this summer, but the dirty water has been a hellacious plague for the past few months and only recently got decent. 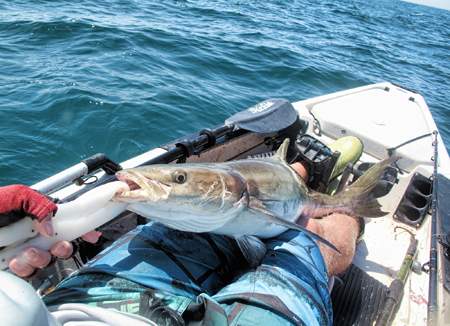 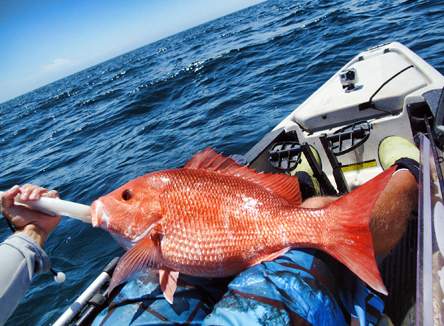 And then there were those anomalies...A couple weeks ago, we could see the bottom in over 40' of water. Knock on wood but it looks like we escaped another hurricane season. Though a strong storm in the gulf would do us good by putting floating debris and trees like last year, and like last year we caught Dorado less than a mile out because of this.

Below: Profile of a Kingfish // Oz presents a beauty King Mackerel - watch out for those chomps... 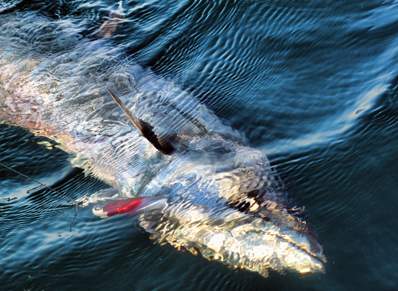 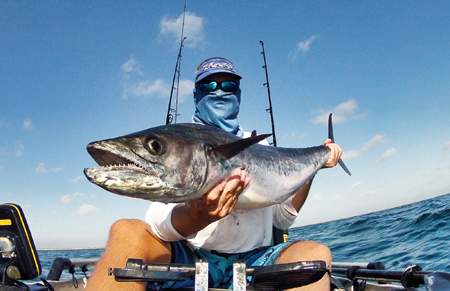 The last couple of trips the King bite has really turned on. We've been jumping quite a few kings in the morning on topwater. The birds and bait have been off and on but recently turned on to 'full blast'. 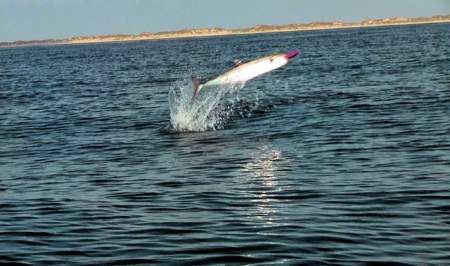 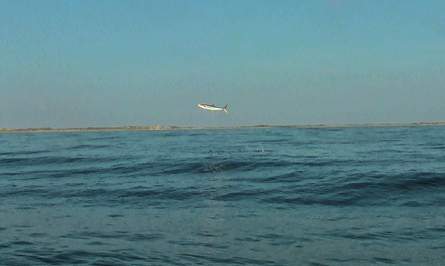 I don't think I am quite ready to pre-fish for sharkathon and blow my mojo so I'll probably stick to trying to obtain bait, in which I actually am lacking this minute. Two days ago the birds were on the beach in the countless thousands and skipjack and sharks devoured anchovies by the acre. My only main gripe is the surf has been so inconsistent this summer... one day the water is primo and beautiful; the next is blown out and dirty. The past few years we've had a pretty good cycle in late summer where we have day after day of calm weather... nope, not this year!

Below: Future "sharkathon" baits // Rigged and ready for the next day 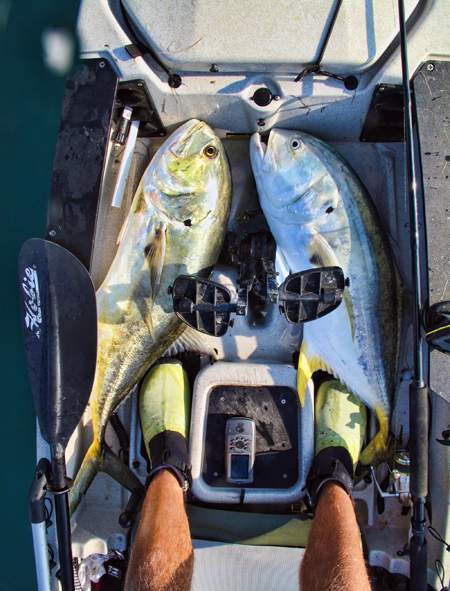 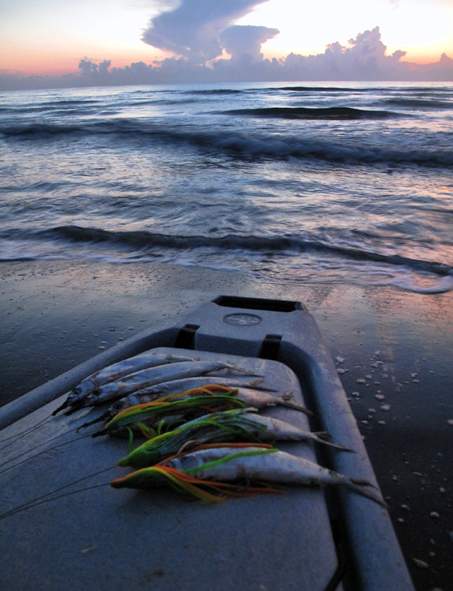 Anyhow, hopefully I have one or two more trips in me before sharkathon, because after that while all you kids are in school and all the other guys are hunting, I'll be down on the beach with big-boy baits out for big-boy sharks!