The air in Mission Bay, CA seemed more like that of a sultry Caribbean day, rather than that of a classic Southern California late-summer eve. As passengers lugged their arsenals of gear down the ramp from Seaforth Landing, the sweat poured off their brows. Most didn’t mind – in fact, the only thing on their minds were the throngs of mixed yellowfin and bluefin tuna that have been consistently making their way up the Pacific coast of Baja for the past few weeks.

We loaded our gear aboard Captain Mike Pritchard’s 80-foot Tribute for the Pelagic sponsored 2.5 day trip over Labor Day weekend and headed for points south. The overnight trek would put us in position over 100-miles south in hopes of cashing in on tuna gold.

Below: Captain Mike Pritchard steers his Tribute _to it's berth at Seaforth Landing // A sensational sunset sets the stage for our trip ahead. 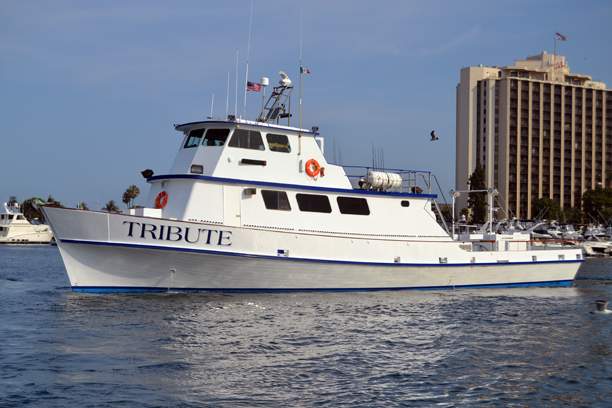 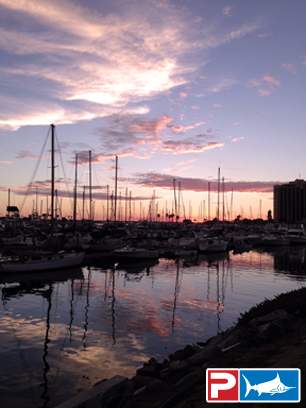 As we awoke to flat-calm, tropical conditions our excitement level began to overflow. Captain Pritchard got on the boat’s loudspeakers and announced that we had spotted our first kelp paddy – finding a nice kelp in the right water can produce fantastic outcomes.

“Wow, this thing is just CORRODED with yellowtail – load up guys!” Captain Mike shouted as we rolled up to the floating fish attractant.

Our passengers commenced to catching their fill of tasty California yellowtail (“Hamachi” in your favorite sushi restaurant). It was aquarium-style fishing, with thousands of the hungry jacks smashing any bait, jig, or anything else that hit the water. This one kelp alone produced near limits for all on the species for our first day of fishing.

After everyone had their fill, we pushed south with the goal of finding the right school of tuna. We passed countless kelp paddies that surely were chalked full of yellowtail, but we needed no more – Captain Mike had visions of tuna.

A blind jig strike on our trolled offerings produced the first tuna of the trip – a handful of beautiful grade Pacific Yellowfin. These 20-40 pound torpedoes were bruisers and put up a great fight, even on the heavy trolling gear. 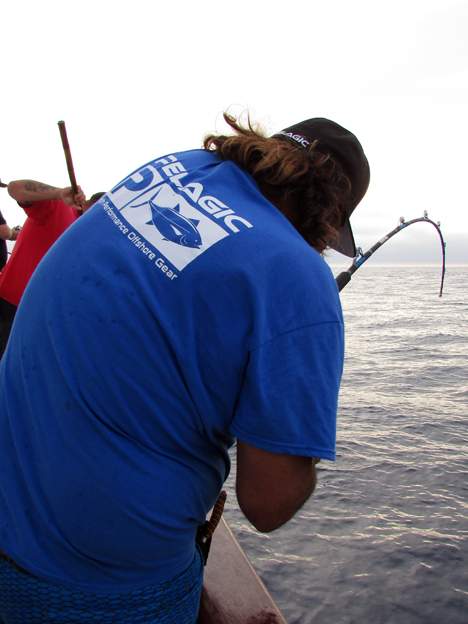 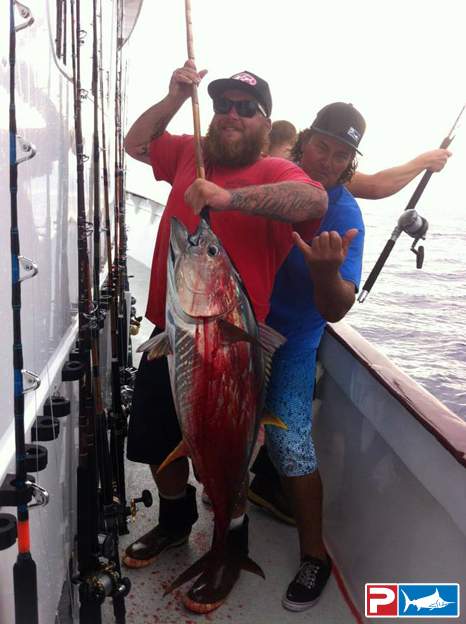 As the sun began to get lower on the horizon, we could see multiple fishing vessels in our view – we knew we were in the right area. Five trolling rods screamed, signaling our first frenzy. These were tuna, and they were good ones. Chummed and hook bait hit the water and the frenzy ensued with most passengers hooking their first tuna of the trip. The mixed yellowfin and bluefin tuna put on a show as our chummers kept the school hungry and close to the boat.

Below: Most of the passengers hooked-up on this frenzied school of tuna // The author with a yellowfin caught while drifting a sardine off the bow. 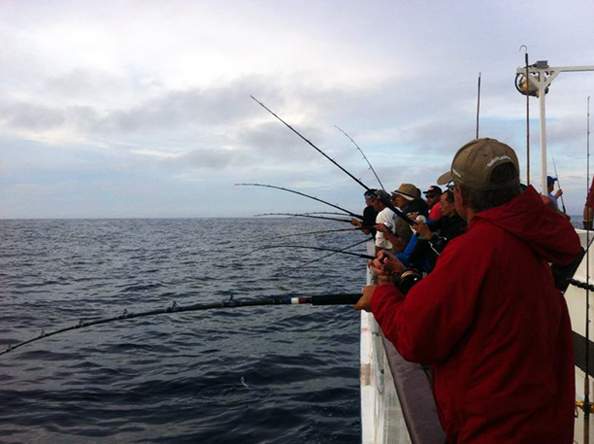 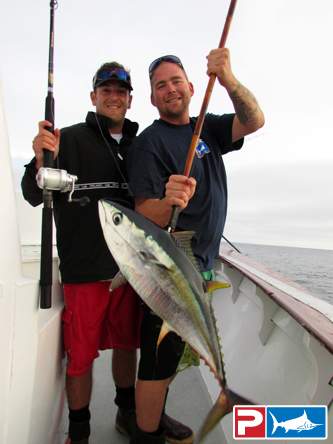 We drifted on this school for hours through an incredible sunset right into dark – a true tuna “sunsetter”. When all was said and done, we had scored into the triple digits on tuna of 20-50 pounds.

Below: The sunset-action in full force as _Tribute _deckhand, Blake, helps a happy passenger with a nice Pacific bluefin tuna. 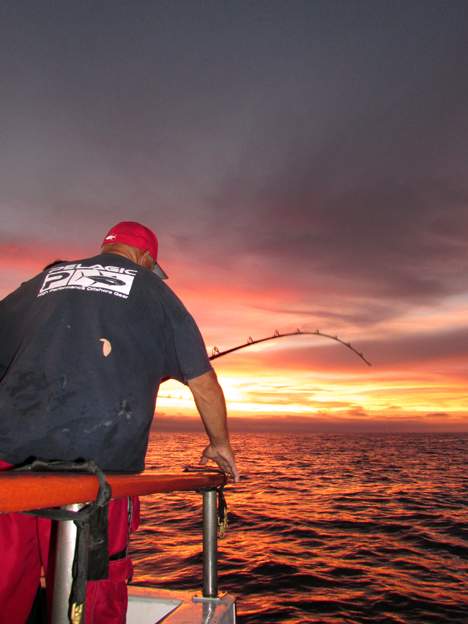 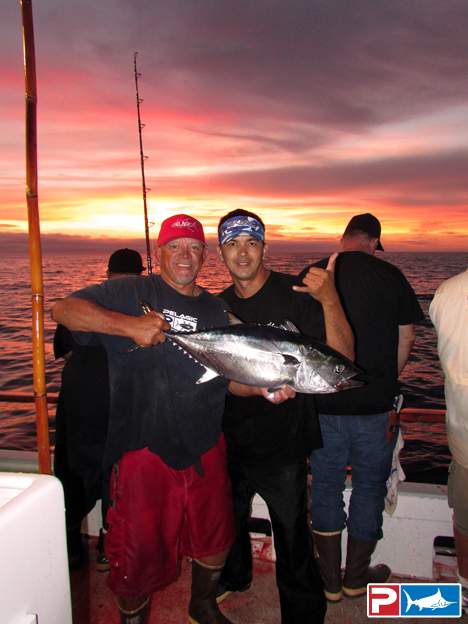 The next morning, most woke up early to get in a shot at hooking a tuna or two during the “grey light” hours on chrome jigs. A few were hooked in the dark, but as sunlight broke through, more and more fish were caught.

While the bluefin were the dominant of the tuna species on the previous day, it seemed they disappeared overnight, as we only caught yellowfin. Both bait and jig worked and were able to post a good score on these quality yellowfin.

Below: Second Captain, Jake Hensley, with some of the early morning yellowfin that were gilled, bled, and perfectly presented for the refrigerated saltwater hold // Eric Lewis all smiles with his primo ahi. 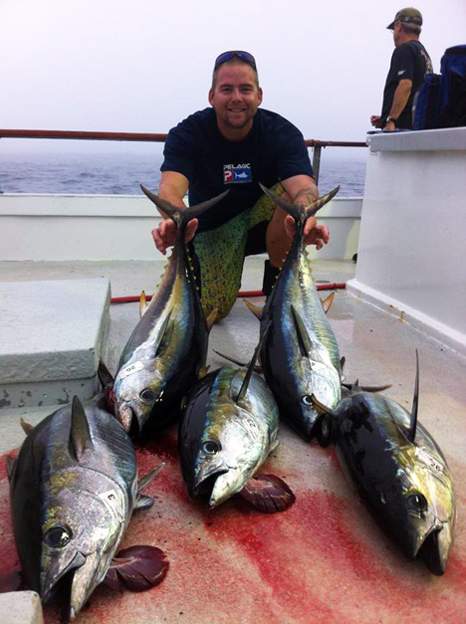 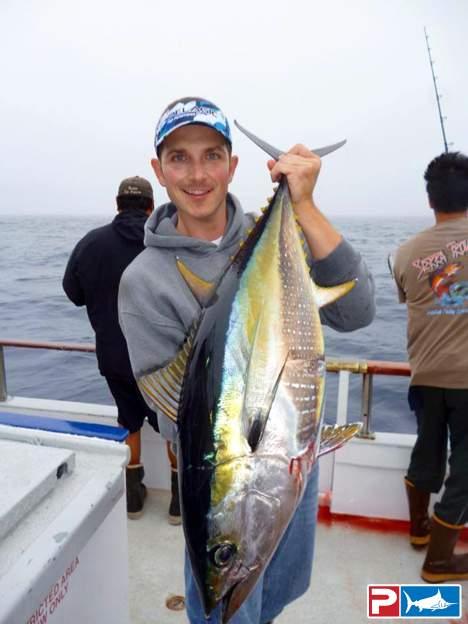 As the day wore on and the bite petered, Captain Mike began heading north, trolling along the way. A few jig strikes produced a couple more fish on the slide, when the school is most frenzied.

At 4:00 PM we had to call it a trip and head for home. Chef Randy cooked us a fantastic meal of tri-tip steak, mashed potatoes, stringed beans, and fresh biscuits. That was all topped off with hot apple pie.

Below: More action aboard Tribute // One final tuna before calling it a trip. 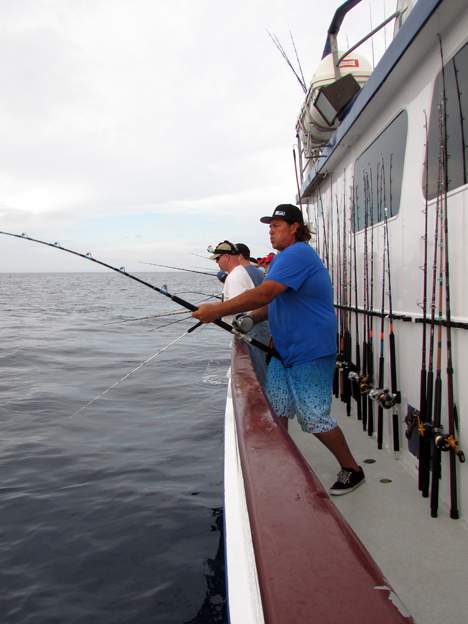 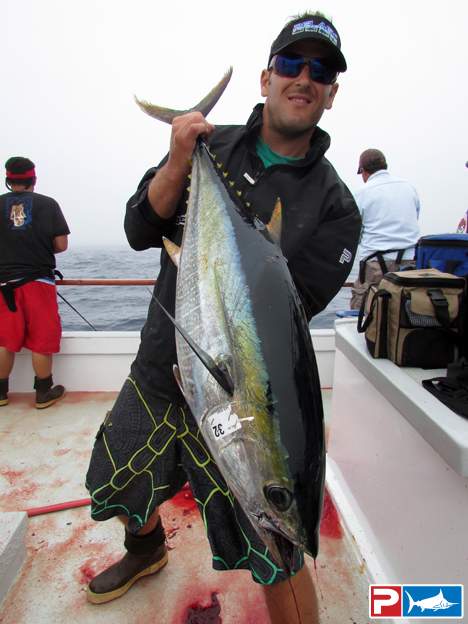 Captain Mike Pritchard and his crew aboard Tribute worked hard for the entirety of the trip. Thanks to Jake H., Brian, Blake, Jake W., and Randy, many heartbreaks were avoided due to their persistence and finesse in untangling lines.

The fishing is hot right now near San Diego. Do yourself a favor and book a trip aboard Tribute by visiting ** www.TributeSportfishing.com** .