People have been bantering about El Niño for the past few years on social media, fishing forums, and down at the docks, but have no idea what is actually going on. Most of these people just associate good fishing with El Niño and leave it at that. Hopefully, I can help inform you about what is really going on. El Niño is an abnormal weather pattern that is caused from the warming of the Pacific Ocean near the equator. This happens when the trade winds switch directions or reverse and it causes warm water currents to flow eastward. This change in sea surface temperatures causes abnormal weather patterns around the globe, but especially for the Baja Peninsula and California coastline. Some of these abnormal weather patterns include: increased frequency and strength of hurricanes, abnormally warm water, increased rainfall, increased humidity, and many other changes depending on the specific region. This warm water that is carried up the California coastline brings with it ecology that we rarely see. A few months back, various beaches in SoCal were plagued with Pelagic Red Crabs, which is synonymous with an El Niño year. Pelagic fish, such as Tuna, Marlin, Dorado, Opah, Wahoo, and many more make their way up the coastline to areas that they rarely visit. 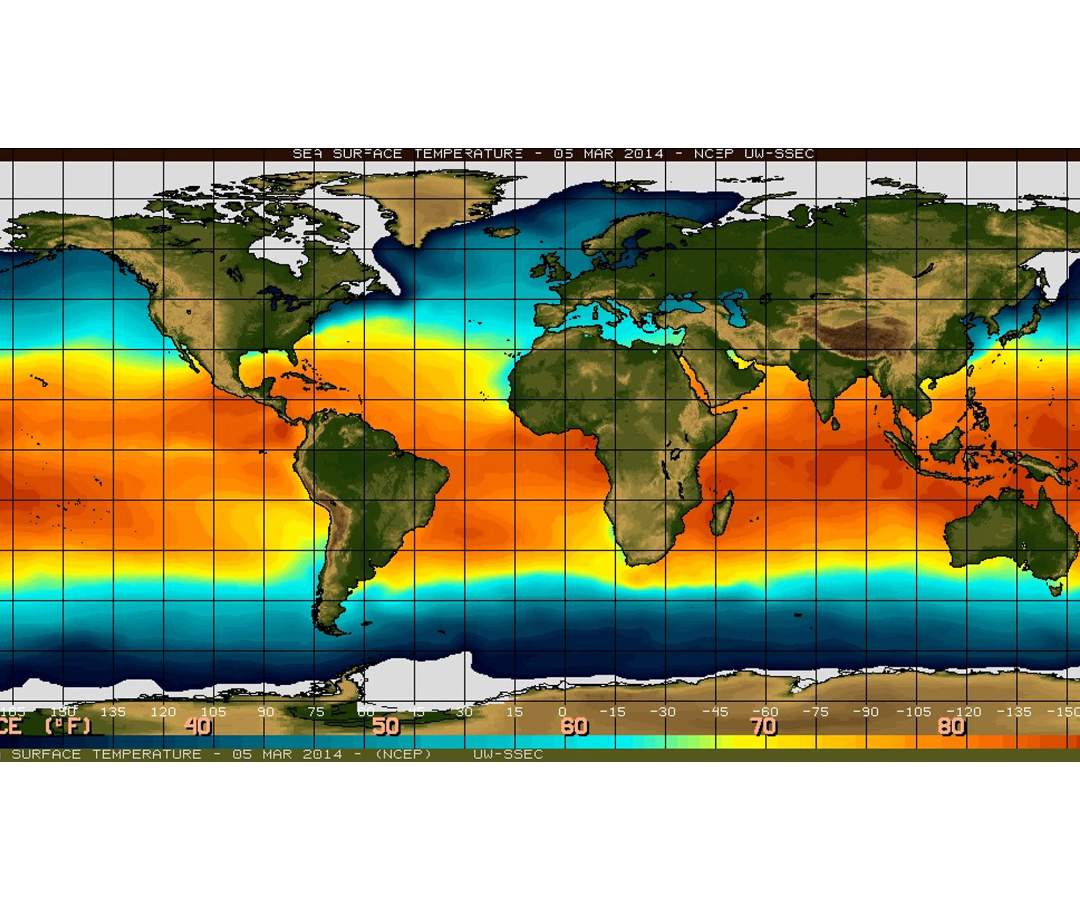 Lets start off mid summer 2014 and work our way through the archives of some historically great fishing that Southern California has been experiencing over the last year. Last summer was some of the best local offshore fishing that I have personally experienced in my short time (10 years) fishing the California coast.

Working as a deckhand for four years on the ¾ day boat, Patriot , out of Newport Landing, I got to experience what it was like to make a living on the water. There are ups and downs when working on boats; but the downs that affected me personally the most was slow fishing. My first years working on the Patriot were during the summers of 2010-13 and this was when California was experiencing a pretty severe La Niña, or cold water cycle, which made the fishing slow to say the least. Summers were spent pounding the same Sculpin and rockfish grounds that we had been fishing all winter long, when we should have been out catching Bass, Barracuda, Yellowtail, Tuna, and other local pelagics. The cold water plagued the beaches and offshore waters for years and it really was taking its toll on me. I wasn’t getting excited about fishing anymore because all I had to look forward to was the same mundane bottom fishing. This was all about to change.

Last July, I was working on the Patriot and the tuna were starting to make a showing in our local waters, which is what I had been waiting for all of these years. We had started catching Yellowfin in great numbers and the season was looking like it was going to go off for the next couple months. The great local Yellowfin fishing continued with many 200+ fish days and we were reaping the benefits. I was as happy as I had ever been working on the boats and that’s because the fishing was epic. I was now excited to get up in the morning and go to work because I knew that we were going to slay it.

After a few months of epic tuna fishing, the bite slowly tapered off and the fish moved out of our ¾ day range. This wasn’t a problem because big bruiser Yellowtail had moved into our local waters on the beach and they were ready to play. The grade of fish was from 20-35lbs and they were all fat and jugged with rockfish. These fish were staging up in deep water spots along the SoCal coast from Baja to Santa Barbara. The local bite for me was at Box Canyon off the San Onofre Power Plant, a few deep-water spots off Long Beach, and a couple spots at San Clemente Island. Most of the Yellowtail we were catching at this time was on the Yo-Yo jig technique in 100-300ft of water. Those same Yellows that showed up last year are still here, but now that the water is upwards of 70 degrees they are biting the surface iron with vengeance. 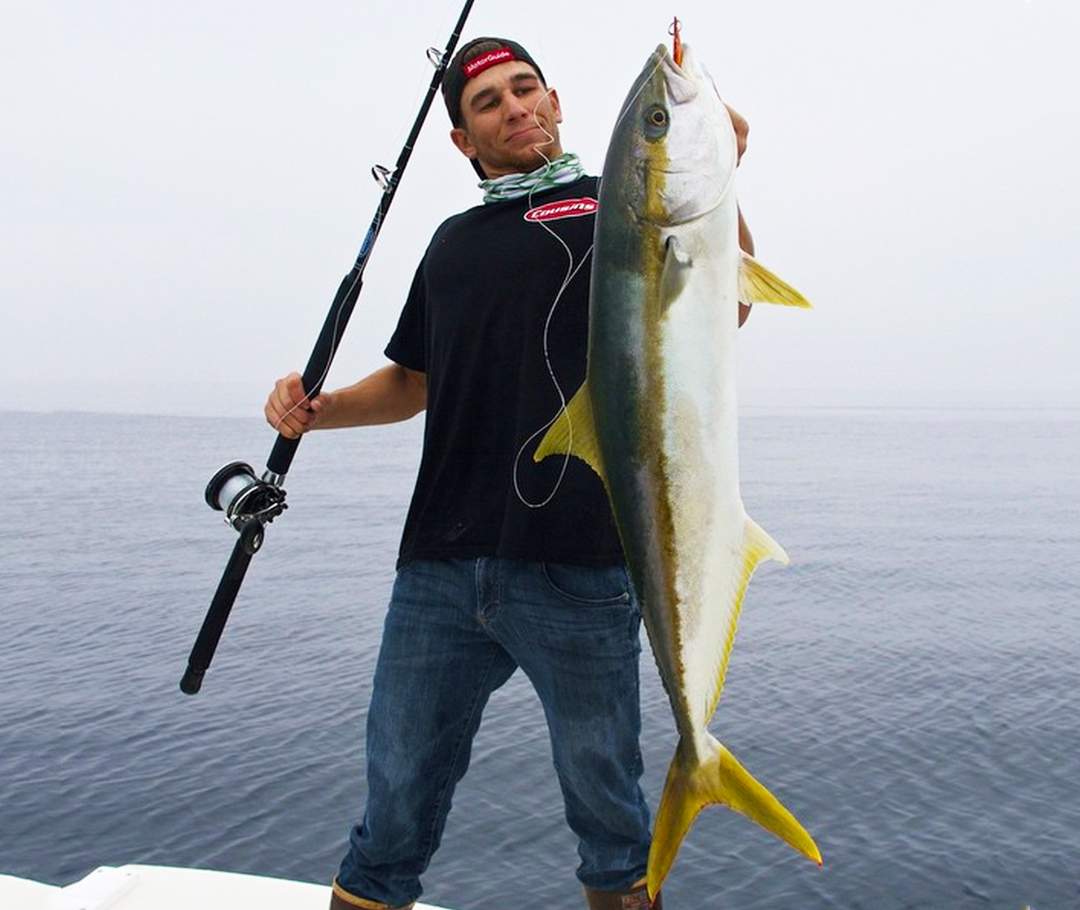 The tuna that were in our local waters last summer never really left California; they just went offshore a little ways and were cruising around the offshore banks like the Tanner and Cortez. I made a trip out there with Pelagic Pro Team Captain Evan Salvay a week before Christmas and experienced the most insane Yellowfin bite in 61 degree water. Yep, that’s right 61 degrees and still catching tuna. We had one stop shopping out there that produced 30 nice Yellowfin that bit everything that hit the water. This, again, was a week before Christmas. 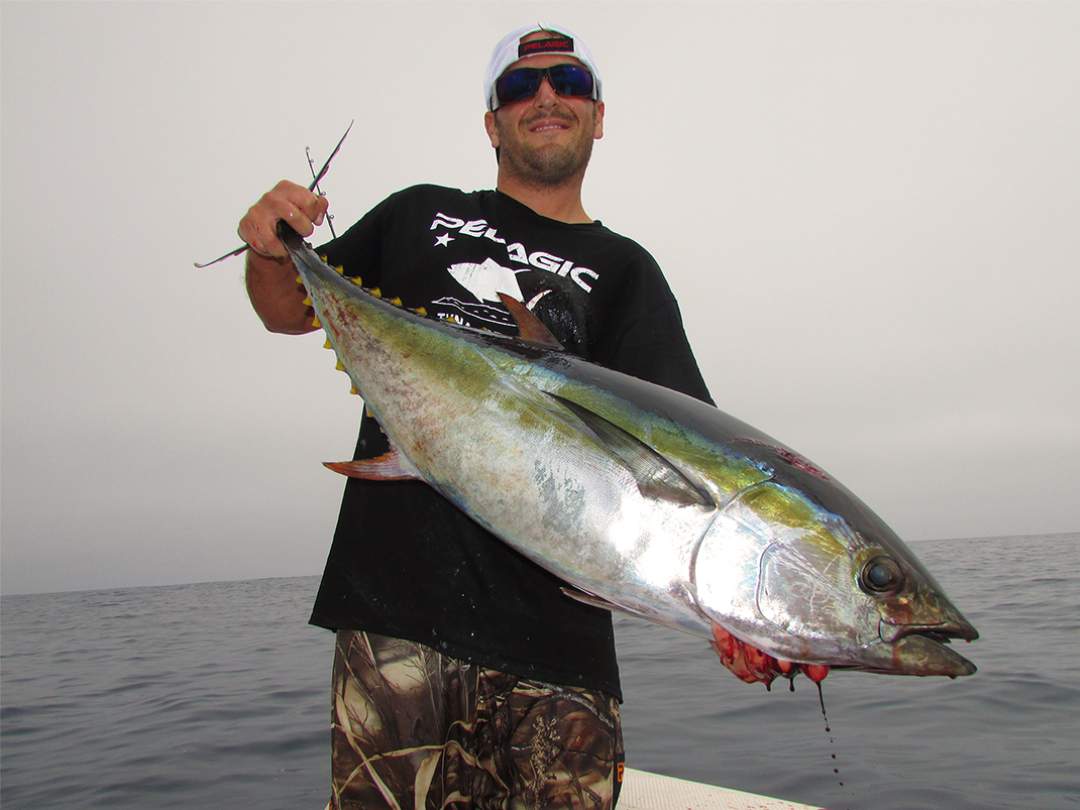 Lets jump forward to May of this year when a wave of Bluefin Tuna started to make a showing in our local waters. At this time we had a massive volume of Pelagic red crab that these tuna were keyed in on, which made it challenging to get a bite on live bait. If you found the right school you were able to pick up a couple fish. These Bluefin that made a showing first were all good size ranging from 30-60 pounds. After a few weeks of chasing this school sized Bluefin there were some reports of giants being hooked locally just off of Dana Point. When I say giant, I’m talking over a 100+ lbs, which is a very large Pacific Bluefin for our local California waters. These fish were literally 3-10 miles off the beach, which is insanely close to be catching trophy sized Bluefin. There were lots of reports of these giant fish being hooked on 30-40lb test and people were either getting spooled immediately or they would be on the fish for hours on end. I heard multiple reports of guys fighting fish for 6+ hours just to have the fish break off at the boat. Ouch!!! 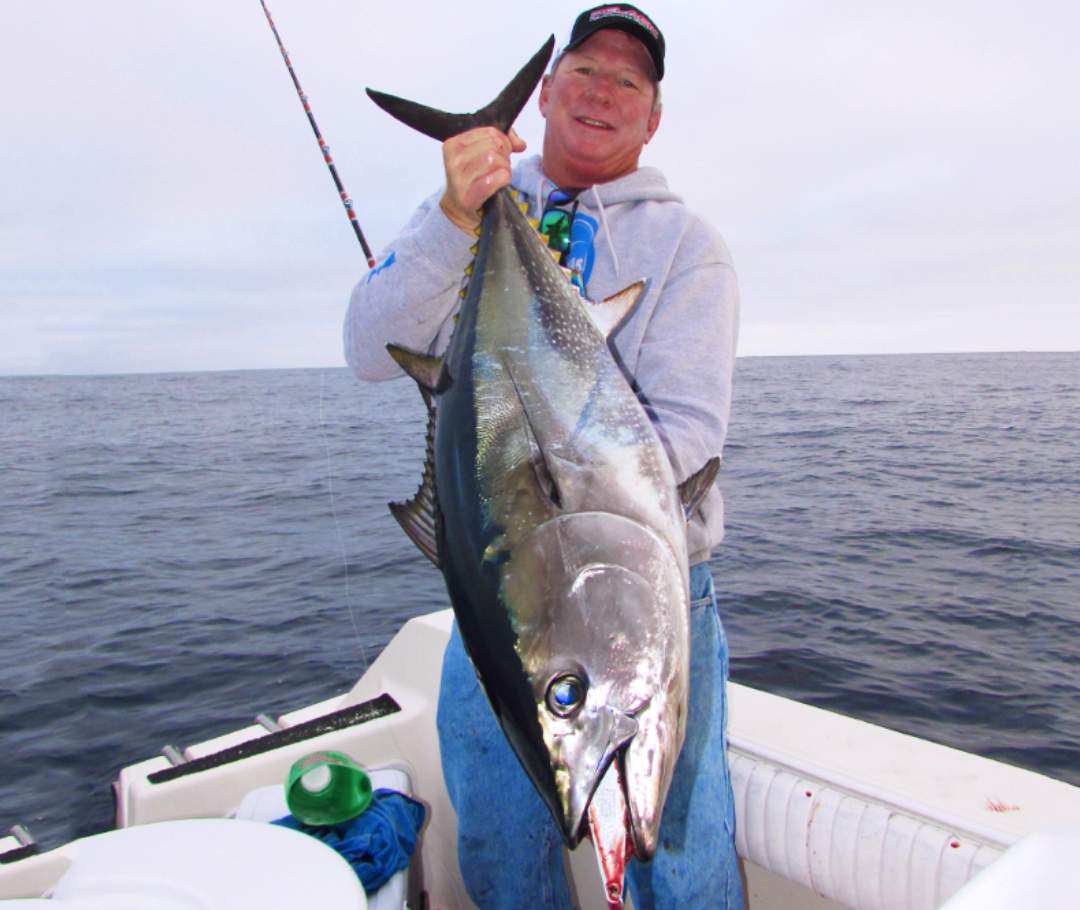 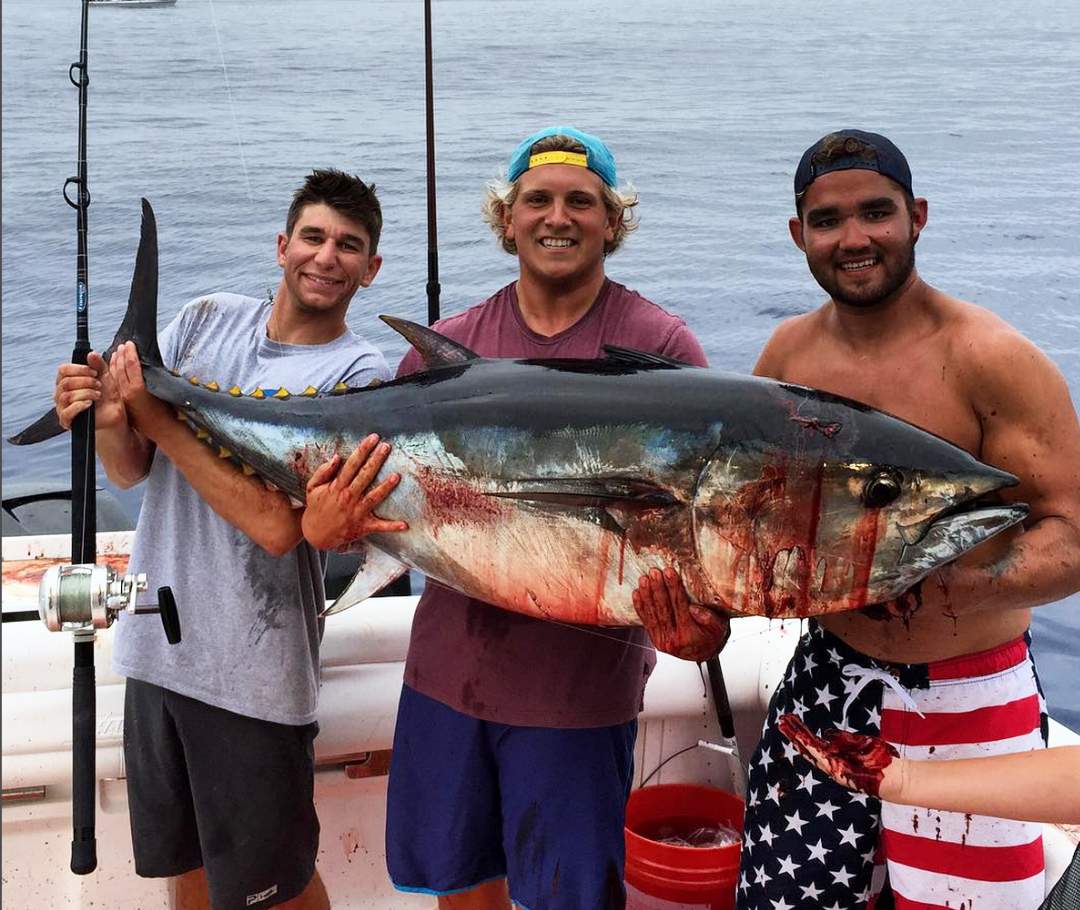 After a couple weeks of insane local Bluefin fishing the bite slowly tapered off and the fish moved off the beaches to the local offshore banks. The warm water that has been pushing up the coast for the past few months has got our local waters up in the mid 70’s and now we are seeing good numbers of Yellowfin and Dorado. The grade of Yellowfin is larger than it has been in previous years and we have seen fish up in the 60-90lb range. The kelps offshore are loaded with Dorado right now and if you happen to stumble upon the right kelp you can get into a full blown ripper bite on all 4 species of pelagics, which are Yellowfin, Bluefin, Dorado, and Yellowtail.

The Striped Marlin have also made a good showing in our local waters and there have been reports from boats getting upwards of six fish in one day. Pelagic Pro Team Captain Evan Salvay went out this past week on a billfish expedition and was rewarded with three Striped Marlin for his efforts. He had eight knockdowns on the jigs and connected with three quality billfish. 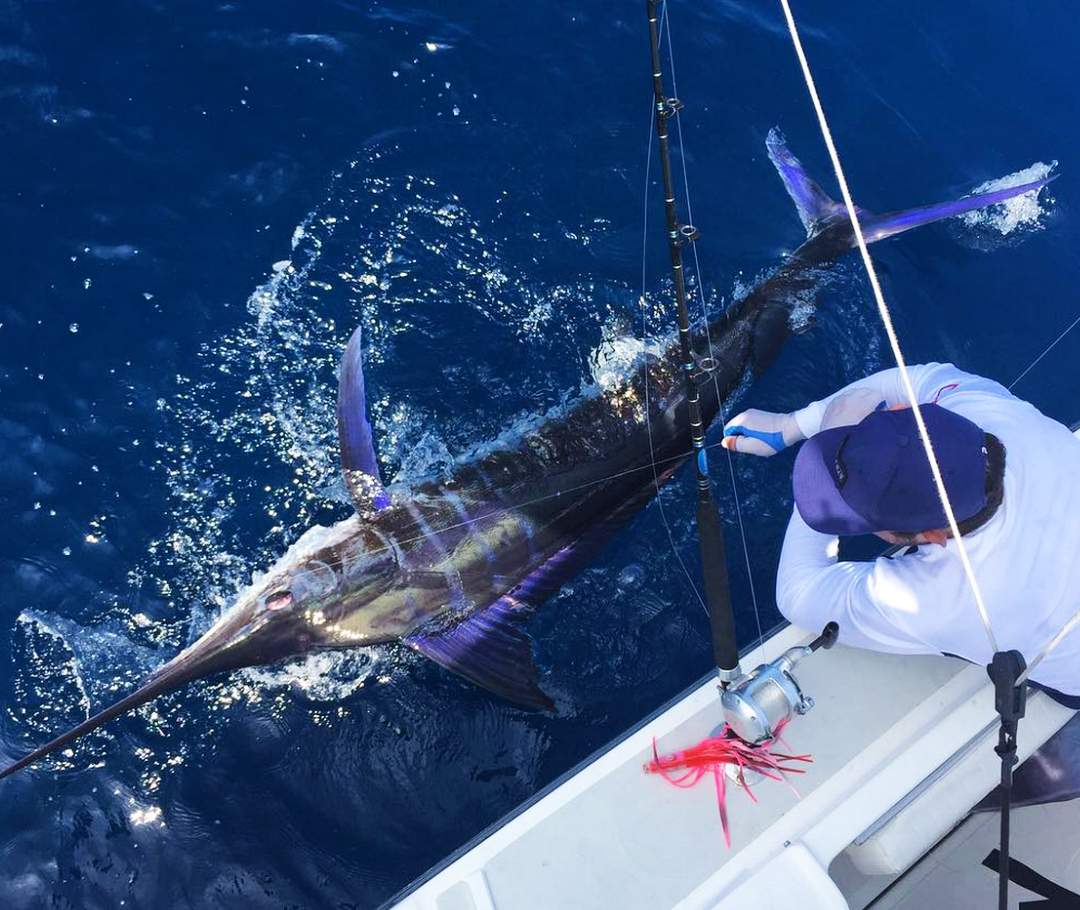 The fishing on the Southern California Coast is as good as gets right now and people are calling it the “bite of the century”. It seems like everything is biting right now and its just the start of the offshore season. The billfish bite is continuing to heat up. The Yellowfin and Dorado fishing is all-time right now for people who can get on the fish. The Bluefin are still around but they are being a bit fickle to catch. Last year we saw a small wave of Wahoo make their home in SoCal waters and there were also a few Blue Marlin caught; so with the epic fishing we’ve already had this year, can expect those rare pelagics to make a showing? El Niño is expected to bring more warm water up the coast of SoCal and who knows what we are in for in the next couple months. Possible hurricanes? Hope not. We will just have to ride out this El Niño summer and see what it brings our way. 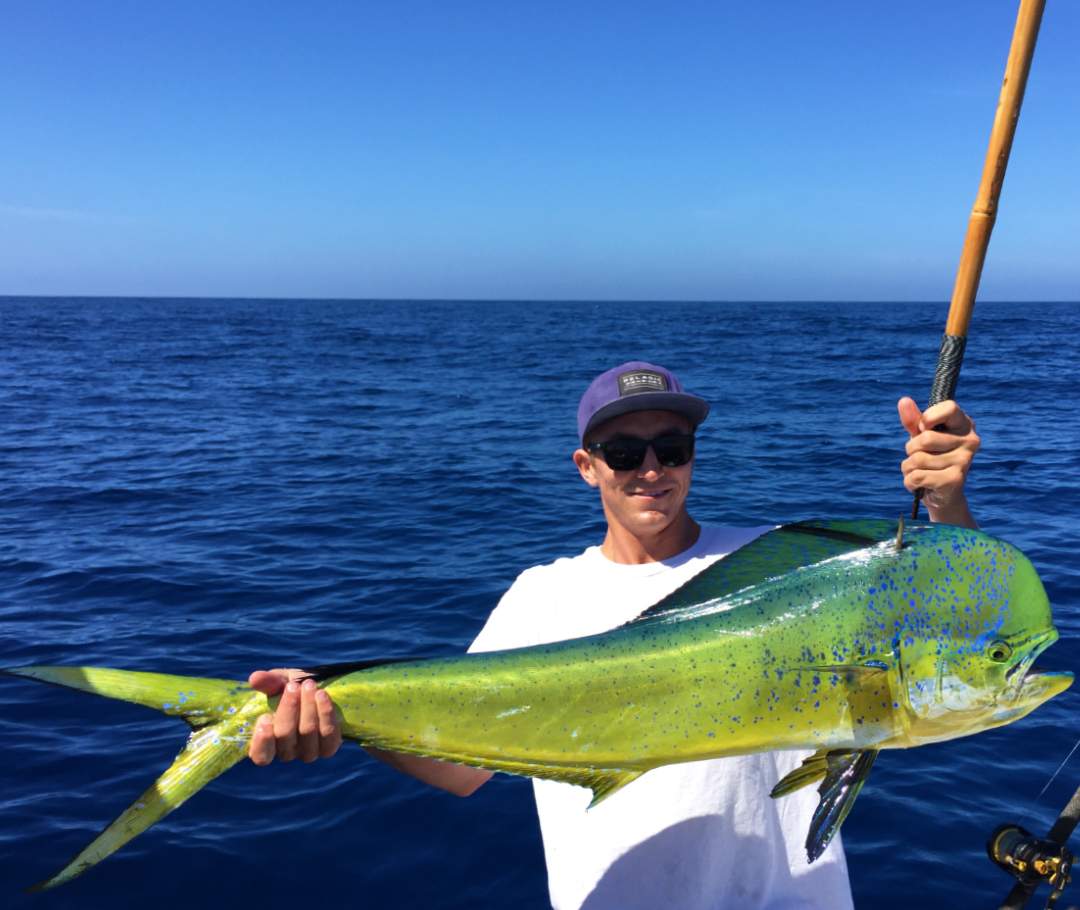