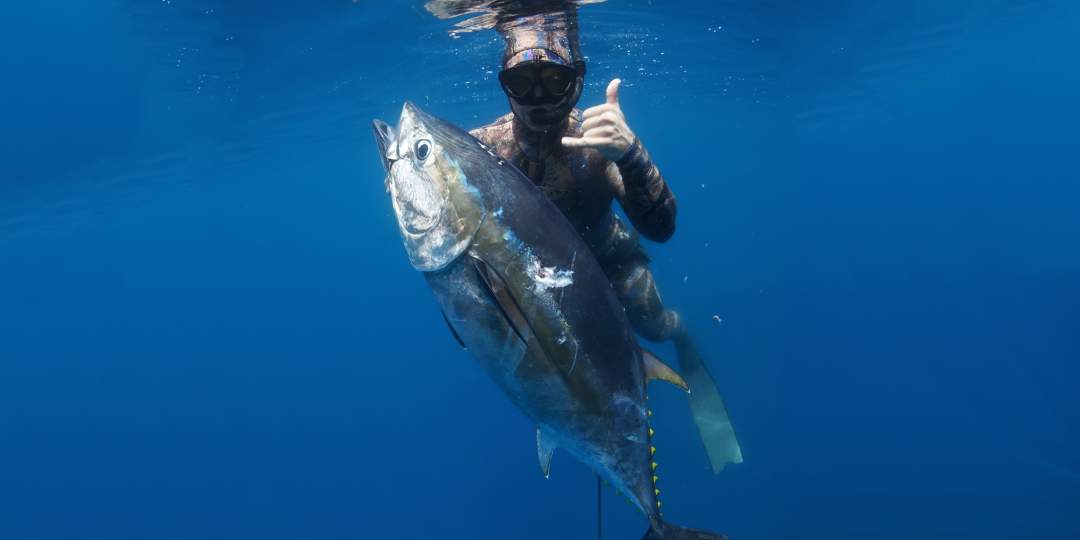 Since early in the season we all knew this year was going to be something special. The fish were thick last summer and after an especially warm winter we all had our sights set on an epic el niño summer.

As far as California fish go bluefin tuna has always been at the top of my list of most desirable species. In my 11 years of spearfishing I have only had a few opportunities to even see these fish in our local waters and had never had the opportunity to shoot one.

It was the middle of June and I was getting ready to go back to work when I heard the first reports of big blue fin in our local waters. As luck would have it the day before I left for a 42-day hitch at work I got the first report of big fish being shot. It was terrible, a twisted feeling in my gut, knowing I was leaving just as things were turning on. I wished I could just quit my job and stay home to fish but obviously this wasn’t a well thought out option. Over the next 6 weeks more and more reports, pictures, and videos poured in to torture me. I just couldn’t stop thinking about the possibility that I might completely miss what could be the best chance in my lifetime to shoot a big tuna at home. 6 weeks passed and I was eager to get offshore.

It was my first day back on the water in CA and as Steele Shaw, Dylan Sims, Greg Minobe, my brother Justin, and I headed out at 4 am our expectations were high. We fished rod and reel all morning and filled the boat with some quality yellowfin tuna up to 40lbs. As the day went on we jumped some paddies but didn’t see much but small yellowtail. Satisfied with our catch we were just preparing to make our way back to Mission Bay when Greg spotted a large area of strange rippling on the surface. Greg was sure he was looking at breezing tuna and insisted we get in the water and check it out.

I had my doubts; I thought these must be the small yellow fin we had been catching all day. I had jumped in on schools of small tuna many times in the past and was fairly certain we probably wouldn’t even see them. I played along, grabbed my Riffe Island Gun with a horizontal reel, and slid into the water.

As Steele and I approached the rippling water I noticed silhouettes below me. At first I thought they were bonito but I soon realized they were far too big. I dove, leveled off at about 25 feet and watched a wall of tuna pass in front of me. Gun extended I kicked hard to close the gap and pulled the trigger on the closest fish. The shaft hit the fish but unfortunately pulled out soon after tension came on the line. I couldn’t believe what had just happened, the fish must have been bigger and further away then I thought.

Quickly we got back into the boat and re-set scanning the water around us for more tuna. It didn’t take long to find more schools and in the next hour we unsuccessfully jumped in on close to 10 groups of fish without even a sighting. I started to doubt whether we would actually have another chance. It was Greg and my turn to dive the next time we saw them. I had switched to my trusty Riffe Bluewater Elite tuna gun and 100-foot bungee setup hoping to not let any more opportunities pass me by.

I saw Greg punch a dive and although I couldn’t see anything yet I figured it couldn’t hurt to try something different. Almost as soon as I dove they showed up, 30 feet below me there were too many to count. Some of the fish in the school must have been pushing 200lbs wide backed and waddling. I heard Greg’s gun go off right as I leveled off. Not wanting to pass up what could be my last opportunity of the day I scanned frantically for a fish close enough for a shot. On my left a school approached, there was one 30lb-ish looking fish close to me with a group of MUCH bigger fish on the outside. Not wanting to take any chances I lined up and pulled the trigger watching the shaft punch far into the closer tuna and my floats rip across the surface. Back on the surface I yelled to the boat for another gun for a second shot and soon had my fish up to the surface.

Unfortunately, Greg’s tuna had turned right as he shot causing the shaft to glance off its back but he said it was a monster. In hopes of putting more tuna on the boat we tried a few more times but couldn’t get on the fish and decided to call it a day. Back on the dock my fish weighed in at 78lbs, a dream fish for me. Thanks to Pelagic and the Riffe International for the gear that keeps putting the fish in the fish bag!