Searching the World on the Fly - Pary IV 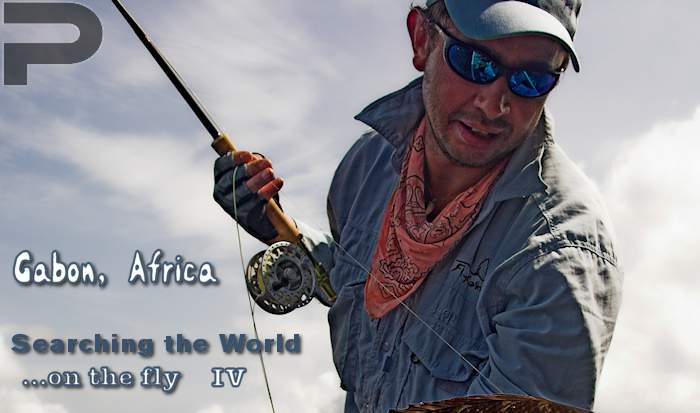 Join the FlyCastaway crew as they continually search the world for the elusive!

Gabon , like Kenya, is growing to be regarded as a major African destination and to be recognized in the world for both its Sport and Fly Fishing. While its conditions are random, the fish call this shoreline of coast home. Gabon also claims its rich waters unmatched while holding some of the largest Tarpon on the planet. The Flycastaway guys will explore this great venue and share their experience with the Waterman's Journal.

Below: Gabon lies along the coast of the eastern Atlantic Ocean ... 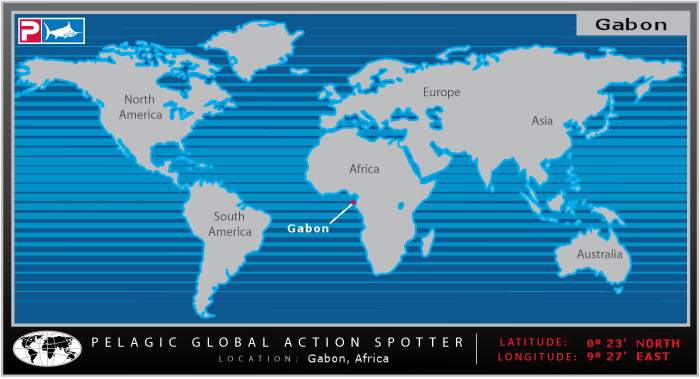 With a unique location right on the equator, Gabon has a very humid climate with rainforests covering the majority of the country. Gabon is also the continent’s least densely populated country. Due to recently designated areas and lands that were announced as National Parks, it throws a great interest into a tourism geared towards both wildlife and beauty. The coastal plains of the country form a large section of the World Wildlife Fund's Atlantick Equatorial Coastal Forest Ecoregion.

So what is it that attracted the Flycastaway crew to Gabon?

It is really an untapped resource. Until recently, the secrets of Big Game fishing, both inshore and offshore, have remained fairly quiet and dwarfed by the word of mouth by its African counterpart Kenya , located on the east coast of Africa. Being able to take part in the fishery of Gabon's coastal waters and being regarded as a pioneer to the sport and the fish it has to offer is extrordinary by all means. Some of the largest Tarpon in the world have been caught here, and even larger ones have been lost. Giant Threadfin are an explosive inshore species that would have never been thought to be taken on a fly. Snapper including Cubera's also roam the waters and have a vicious smile to greet its anglers. The waters are rich with a grand food-chain.

The Flycastaway crew makes their way to another excting destination. Anxiety is through the roof. It is a very real present day Jurassic Park to these guys. They can not wait to hit the water and almost instantly they are out in the realm. It is time to explore this inshore haven teaming with fish big and small.

Below: Getting ready to take part in another incredible adventure... 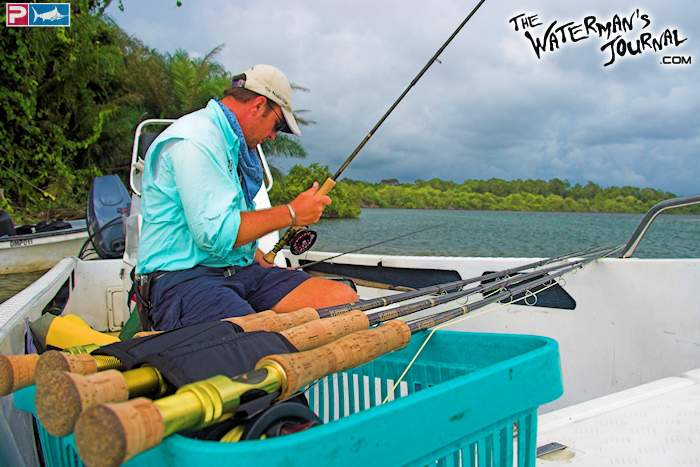 Giant African Threadfin roam the waters off Gabon. With over 30 species of Threadfin in the world, these are among the largest. They are powerhouse swimmers. Their 'V' forked tail is built for speed and agility. Threadfins frequent open, shallow water in areas with muddy, sandy or silty bottoms; they are rarely glimpsed at various reefs. They often school in large numbers and since their flesh is of desired table fare quality, they are highly targetted both commercially and recreationally. However, to get one of these fish to take a fly in the fairly common tea-stained waters of the coast require skill and patience.

Below: A great way to start off the trip. A Giant African Threadthin is check off the list for Arno and Flycastaway. 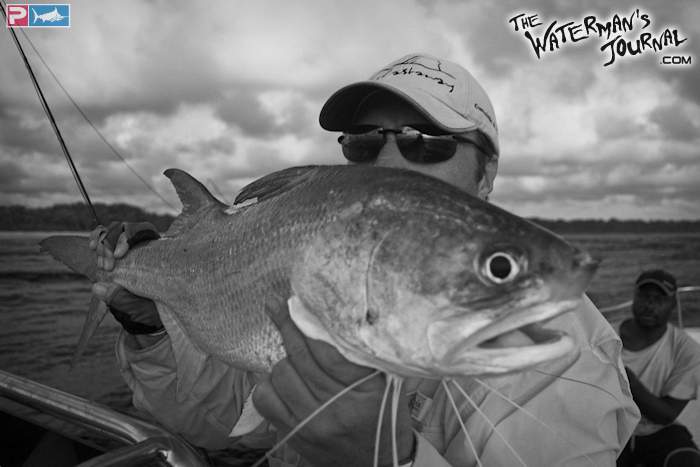 West African Ladyfish is native to the coastal waters of the eastern Atlantic Ocean from Senegal to Angola. Some have been known to grow as big as twenty pounds. Like their Western Atlantic cousins, they prove pound for pound that they are true aquatic warriors, often breaching out of the water when hooked.

Below: Arno strikes back to back this time with a West African Ladyfish . 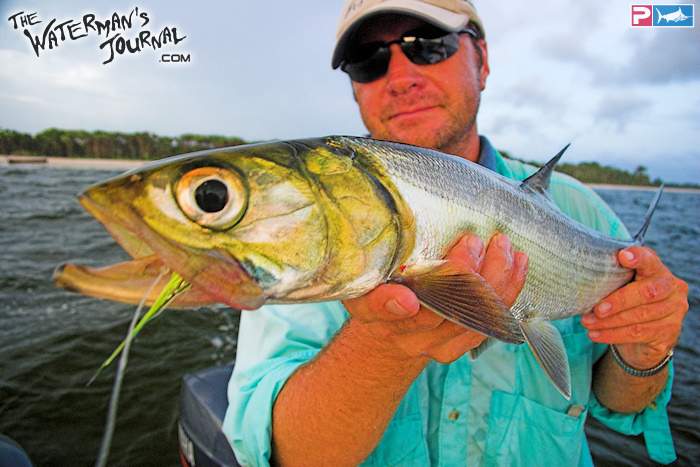 Below: Gehard all smiles lands a Giant of his own ... 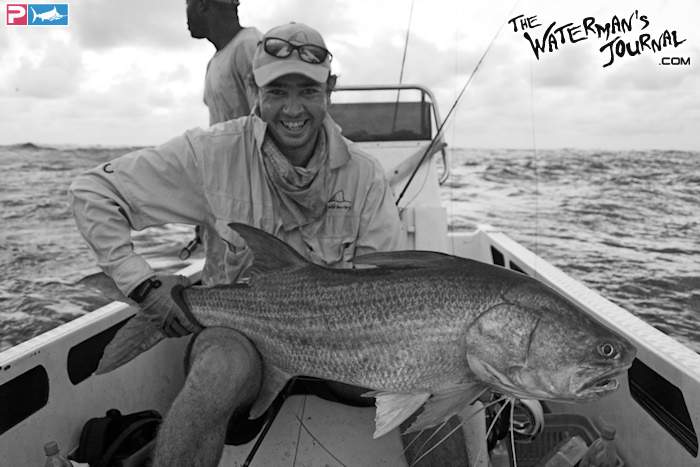 Below: Gerhard goes back to back with another Giant to be displayed for a photo. 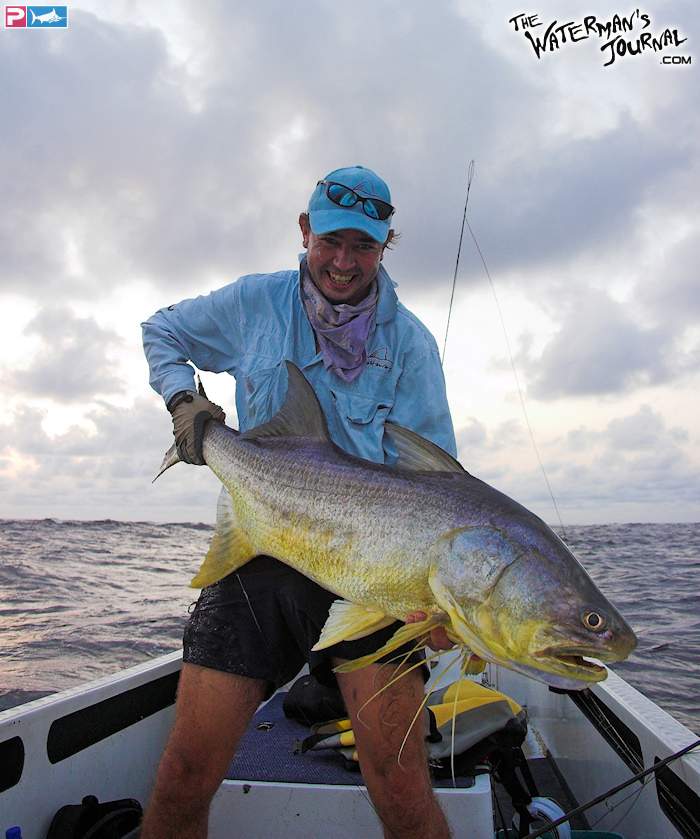 Below: Gerhard is hooked up yet once again. 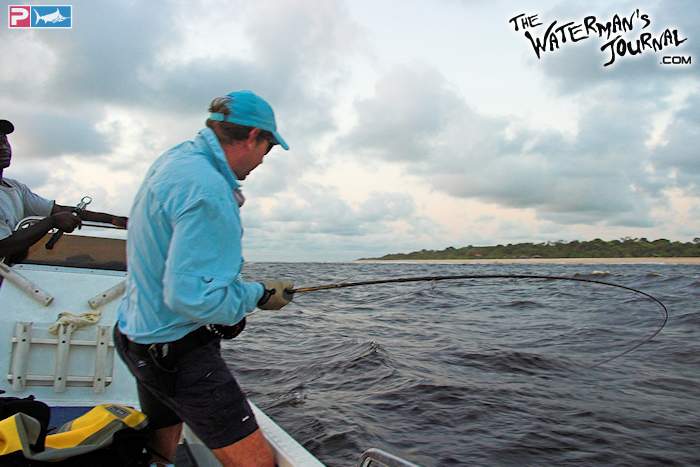 Along with Mega Tarpon and the largest species of Barracuda in the world, various Grouper and Snapper are also abundant in these waters. The Cubera Snapper , is a predatory Snapper with ferocious teeth. Exceeding weights in excess of 100lbs is not uncommon. The Waters off Gabon hold these fish and while very difficult especially in off color water, it is possible and has been done by these guys on several occasions.

Below: Gehard gets into the action with a small Snapper... 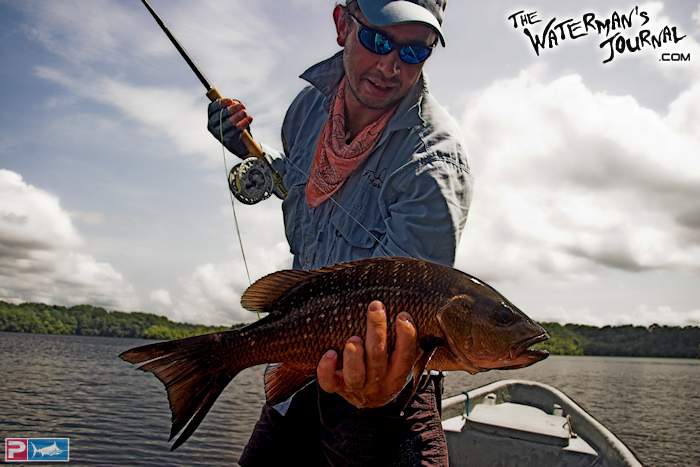 It is not every day when you get to fish in one of the most remote coastal regions of a continent. The fish are teaming in these waters and can be seen boiling under the bird activity. The land and marine game in Gabon is some of the worlds finest and should be experienced by those who ever have the chance and thrill for adventure. Flycastaway has been an icon in traveling the world in pursuit of new species and new fisheries and this trip to Gabon was just another round of icing on the cake.