Searching the World on the Fly - Pary III 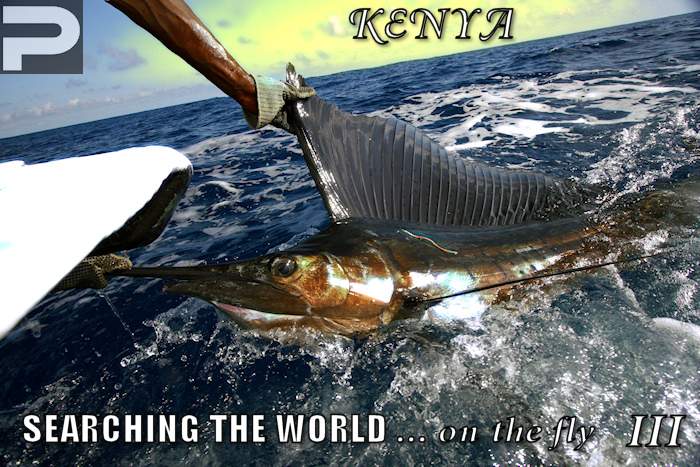 Join the FlyCastaway crew as they search the world for its most desired big-game fishery!

Kenya is and will always remain one of the top game destinations in the world, both land and sea. It is one of the true placest on earth where you can find an untainted ecosystem where wildlife and natures marine predators flourish. It is here that the FlyCastaway crew has chosen to test their skill with a variety of Pelagics.

Below: Kenya lies along the coast of the Indian Ocean ... 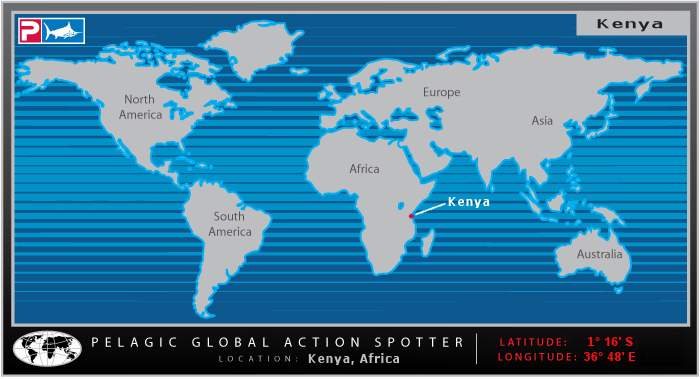 "The billfish angling is simply world class, where on one occasion up to ninety Sailfish were raised in a day. Although billfish form the main attraction to this venue, other species like Giant Trevally, Largemouth Queenfish, Blacktip Trevally and King Mackerel can be targeted inshore. Oxeye Tarpon can also be targeted in the creek close to the lodge. The fleet consists of a 33 foot Lochin sport-fisher for offshore fishing, while smaller skiffs are used inshore....

The offshore fishery of Manda Bay is unquestionably the finest going around on Africa's east coast. Striped, Black and Blue Marlin together with our prime target, Indo-Pacific Sailfish, as well as a host of other pelagic species abound in this pristine piece of ocean.

As far as other pelagics go, Tuna, Dorado and Wahoo are abundant throughout the year. There is also the chance to lock horns with the night feeding Broadbill Swordfish, which some might say is pound for pound the strongest fish that swims. All the offshore fishing is done aboard the 33 foot British built Lochin sport fishing boat, known as the Cheza. The crew of the Cheza are simply world class, being more than proficient in raising all forms of billfish and other pelagics for fly anglers to cast at. The guides of FlyCastaway together with the crew of the Cheza will guide and instruct you onto the fish dreams are made of."

Below: A mouth full of razors, a quality Wahoo is taken on a fly... 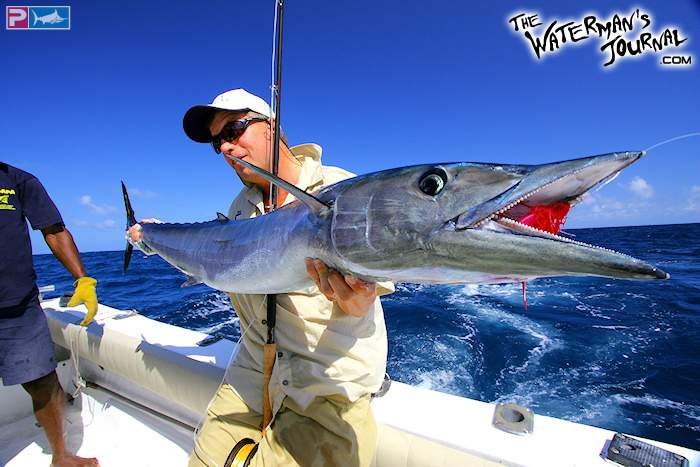 Dorado (also known as Dolphin and Mahi) will forever be one of the worlds most efficient marine species. They are found in ALL tropical and sup-tropical waters around the globe. They have an extremely fast growth-rate, and are recognized as one of the most beautiful and impressive gamefish in the world. It is because of this that they are highly targetted by sportfishermen. Their table fare also remains on the top of the list as well. As long as our oceans have a supply of food for these fast replenishing species, then future generations shall be able to share the fun in hooking up with an aerial Mahi. The waters off Kenya have some of the healthiest and largest Dorado in the world.

Below: Hardie lands a brilliant lit up Bull Dorado from the waters off Kenya. 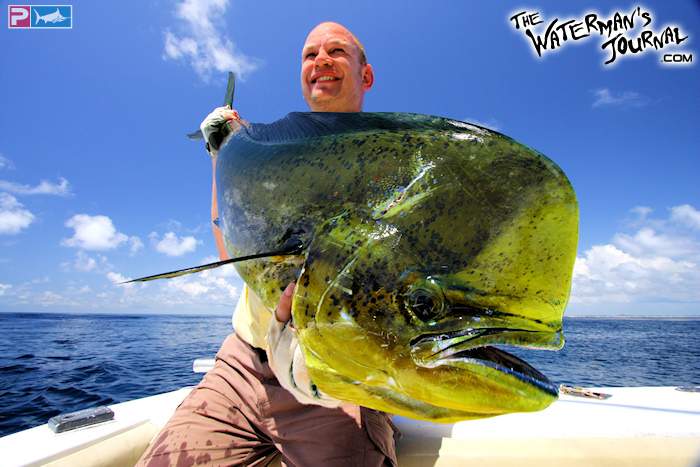 Below: Hardie also shows off a Yellow Dot Trevally . 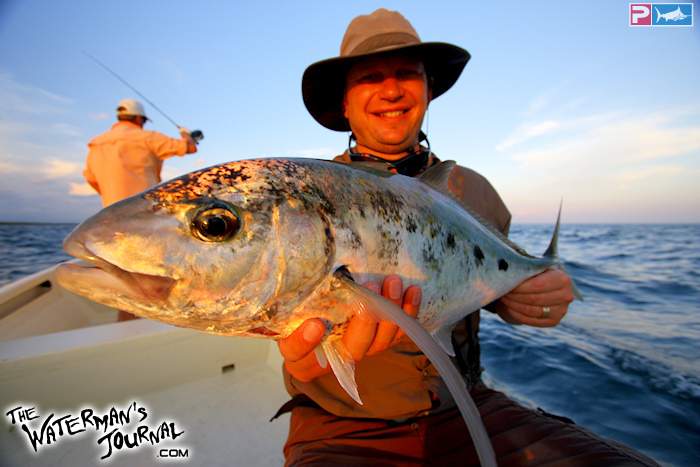 Below: A Tuna on a fly can be pound for pound one of the most amazing fights you can have in the sport ... 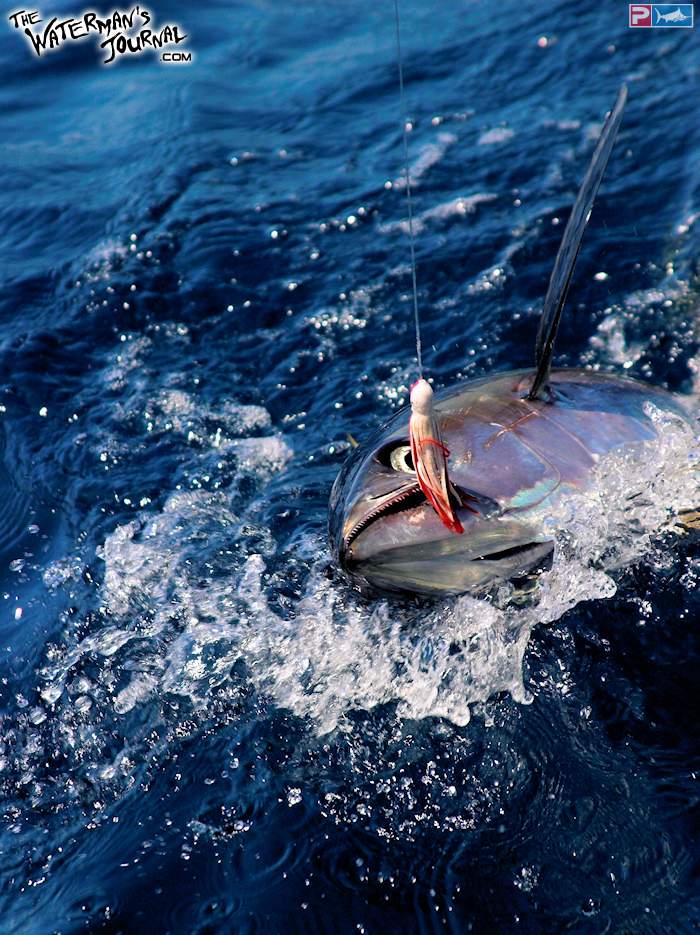 The Sailfish season kicks off in October and runs through until April, with huge numbers of fly rod size Sailys' arriving to feed in the food rich waters which surround Manda. The Striped Marlin along with their larger cousins, the Blue and Black Marlin follow later on in the year to join in on the banquet of baitfish which congregate around these waters.

Below: Gerhard hooks up on a Sailfish . 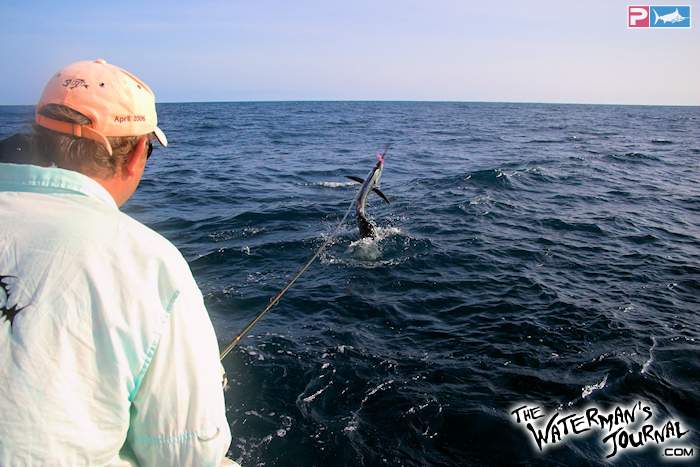 Below: Posing with a Sail on a fly, Gerhard is all smiles. 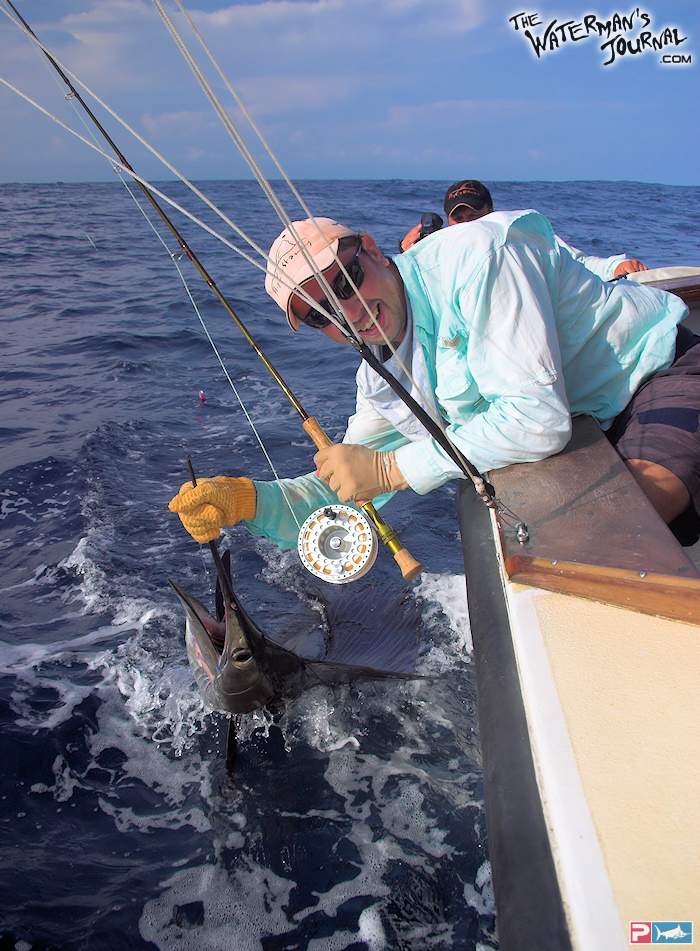 A variety of techniques such as the teasing of billfish, sight casting and deep water dredging can be experienced. The experienced guides from FlyCastaway invent and perfect necessary techniques that assist with the particular application to ensure the success of their trip.

Below: Arno gets into the action with a fine lit up Sail himself... 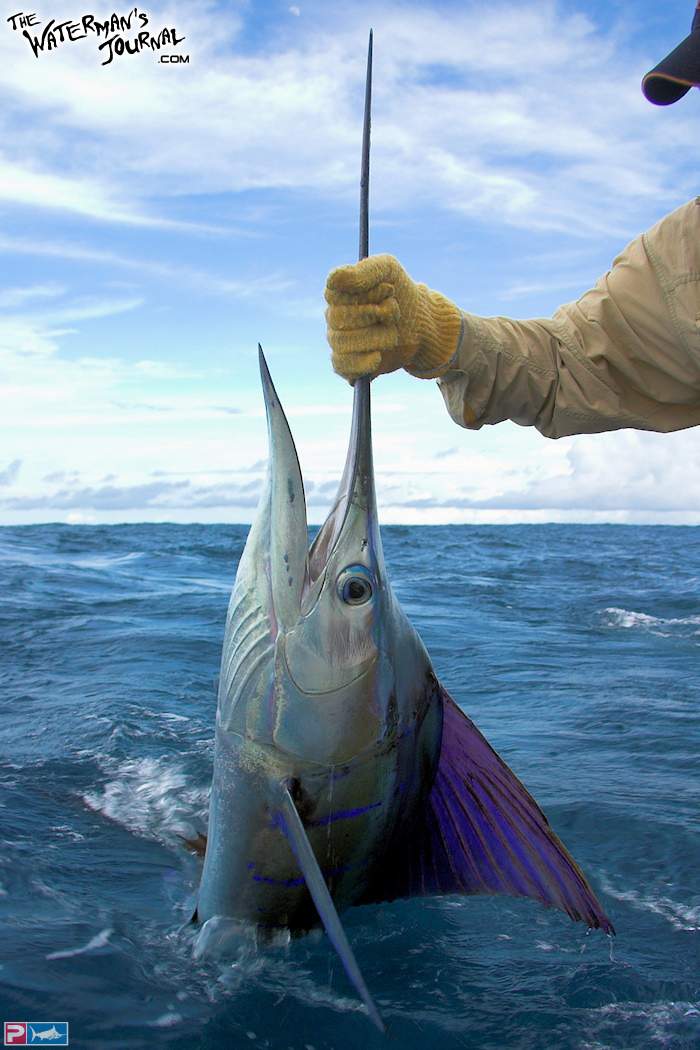 Below: Hardie gets hooked up on a large breaching Sailfish . 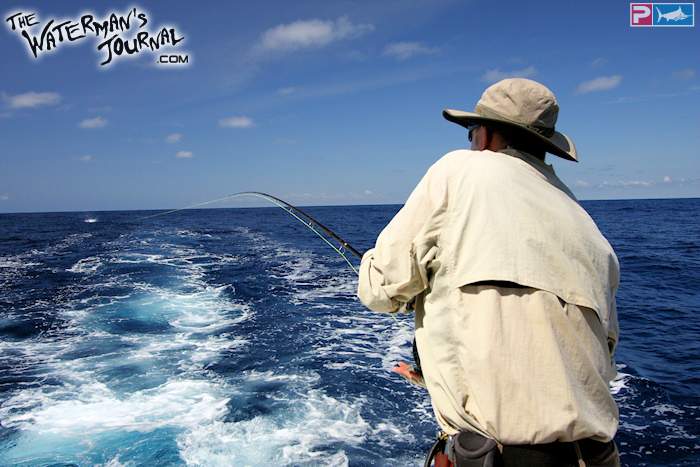 Below: A quick pic and the beauty is released, with a tag . 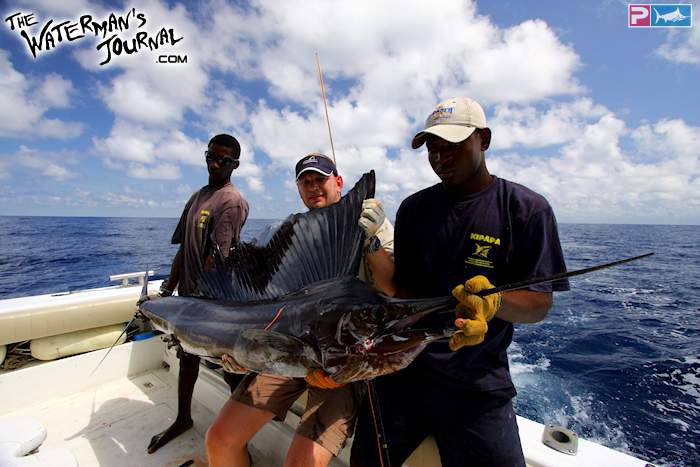 Below: Showing the tagging process on a Sail at the boat. 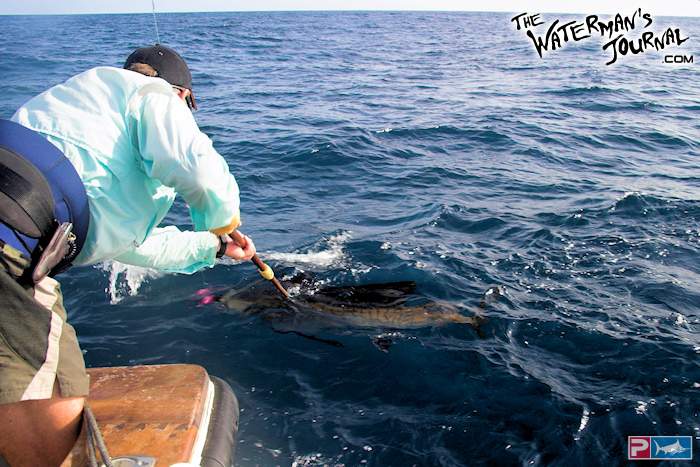 "Northern Kenya's Manda Bay offers anglers the opportunity to target billfish such as Sailfish , Striped Marlin and even Broadbill on fly. Over the last few seasons Manda Bay has proven to be the premier Sailfish destination on the East coast of Africa. The lodge is situated on Manda Island in the Lamu-Kiwayu archipelago. The island is surrounded by beautiful white beaches, most of which are fringed with large coconut trees - a truly idyllic setting!"

Below: World Class Action by the crew of FlyCastaway ! 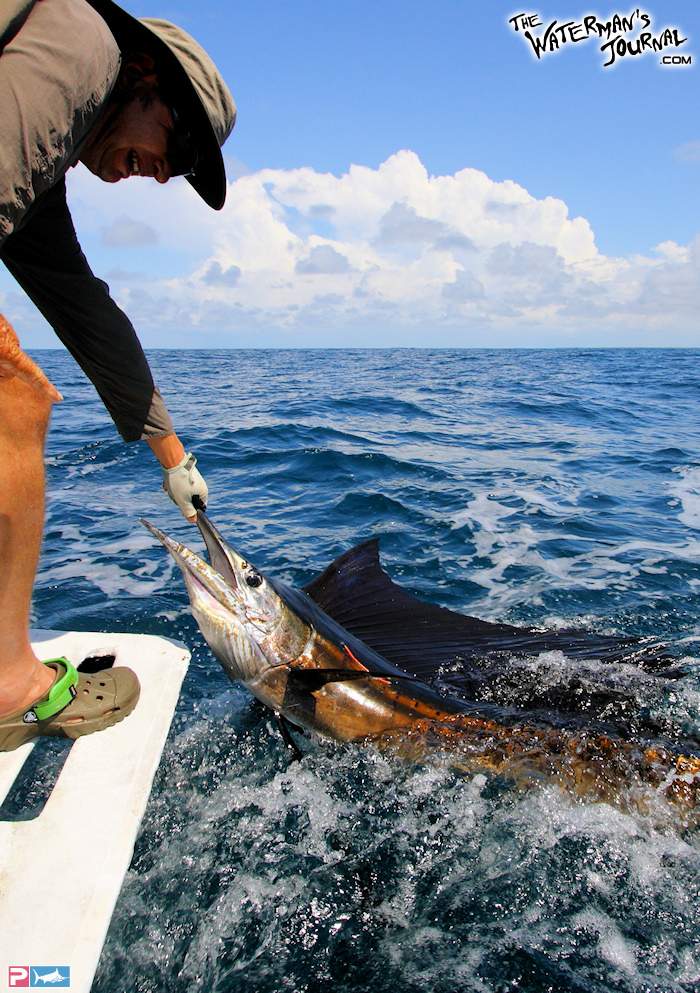