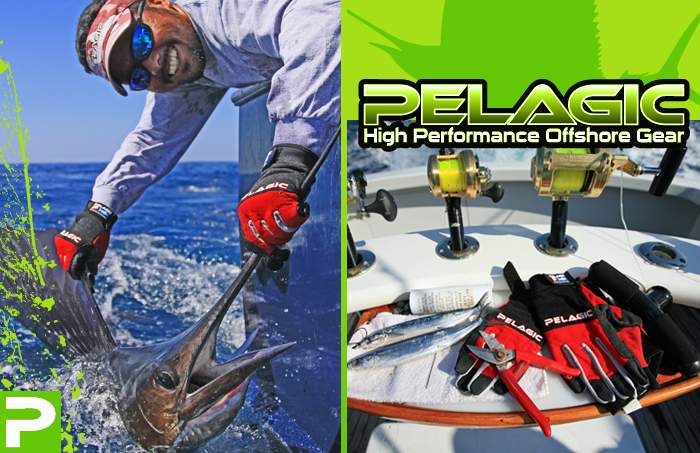 PELAGIC Pro Team Captain Brad Philipps provides an incredible report with some amazing photos taken by world famous marine photographer Bill Boyce ... (check out ** www.boyceimage.com** ) The report from Philipps combined with Boyce's images makes you just want to get on a plane, fly down to Guatemala, and get on the boat!!!!

see below, a first hand report from Captain Brad Philipps himself:

The fishing off the Pacific Coast of Guatemala aboard the 'Decisive' with Capt. Brad Philipps has been extremely good this past March. We have seen blue water with many big release days on the sailfish as well as some good blue marlin action to keep our anglers extremely happy and finished the month off on a huge body of sailfish giving us high hopes for the rest of our season. 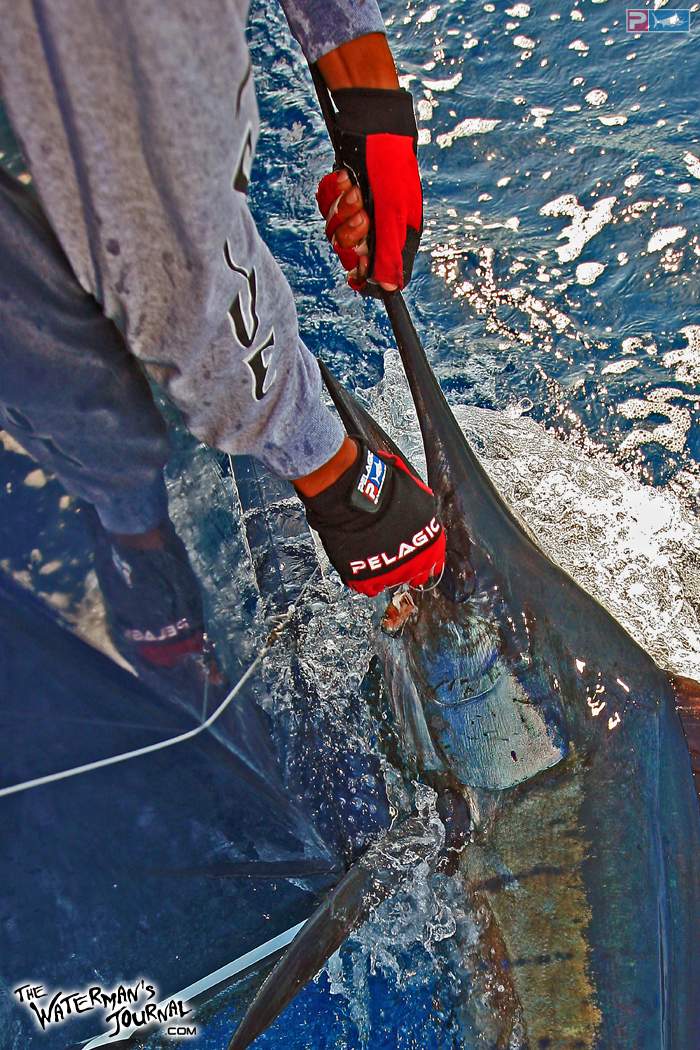 We started the month with our loyal friend Brad Watkins and his partner Lori Hazel going 16 from 23 on the sailfish with a 500lb blue that looked like eating but never really did it's thing. The next day they went 13 from 19 with Lori really getting into the swing of things hooking her own fish and a great double header for the couple. On the 3rd we had an exciting day with Brad catching a very lively sailfish on 2lb test, as well as another 4 on our standard 20lb Alutecnos gear. We also missed a nice blue on the rigger and late in the day released a 300lb blue to finish it off in style. The 4th saw us release 4 sails before returning early for a little tour of the surrounding sights. Running a little wider, Brad went 20 from 26 on the sailfish, with an awesome 500lb blue released on the 50# standup on the last day while Lori and Cindy enjoyed a relaxing day at the Antigua Golf and Country Resort, to finish off another wonderful trip to Guatemala.

Things started slow for Frankie Mirandes, Mike Cromwell, Chuck Matheny , and Jim Gill on the 7th with only a handful of releases but every new day starts with hightenend optimism in Guatemala with the promise of a big day. This is exactly what we found on the 8th with 34 releases from 45 bites for an outstanding day on the water with a great bunch of guys. The 9th saw us release 10 sailfish on bait, 2 on the fly and a 250# blue for Frankie to see them off on a triumphant note. 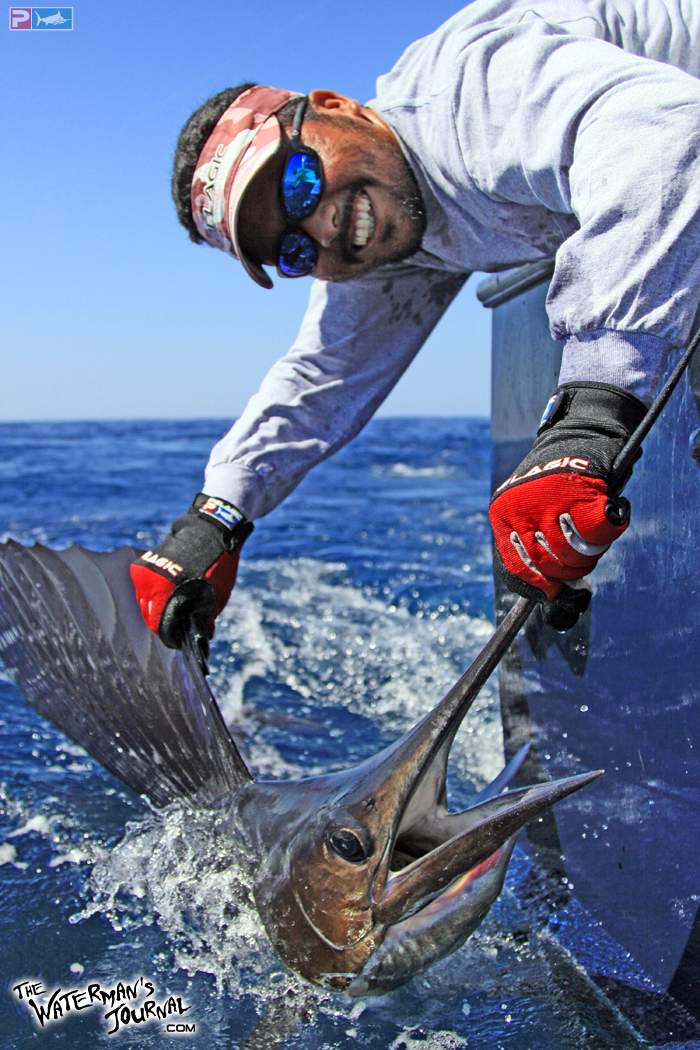 The 10th saw our long time friend Gary Hughes along with Rob Geldenhuys, Chris Phillips and Gary O´Neill start their trip with a busy 13 releases from 18 bites. The sailfish bite slowed a little on their second day and after finding some huge schools of marauding bonito we switched gears and live baited for blue marlin. Only minutes after soaking the first bonny, we had a large blue crash the bait but unfortunately came unstuck. With expectations raised after this quick bite we plugged away and before the afternoon was over Gary was hooked up to a solid fish of around 400lb's which put on a great display. After releasing 4 sails the following day we found some floatsome with an unbelievable amount of bait and life around it and couldn't resist the temptation to live bait the area. We pulled the hooks on a small blue and had some sail and dorado action but unfortunately could not find the big girl we hoped would play but had a great day never the less.

Taylor Glover and his sons Frank and Chris, all of Atlanta Georgia graced us with a visit the 14th through the 16th. We found fish out on the western edge and missed a nice 400lb blue early in the day, finishing the day with 10 sailfish releases. Things had slowed in the same area the following morning and we made a move over to the east and were rewarded with a spectacular 500lb blue for Chris, along with 5 sails. We finished the Glover's trip on a high note with 15 releases from 25 bites on a shortened day so the guys could make it up to fly out early.

We raised 16 fish for our champion fly angler Scott Lund on the 18th but only managed a single bite which Scott converted.. Finding new water things picked right up the next day with 8 on spin and 3 fly releases, for another enjoyable monthly trip for Scott. 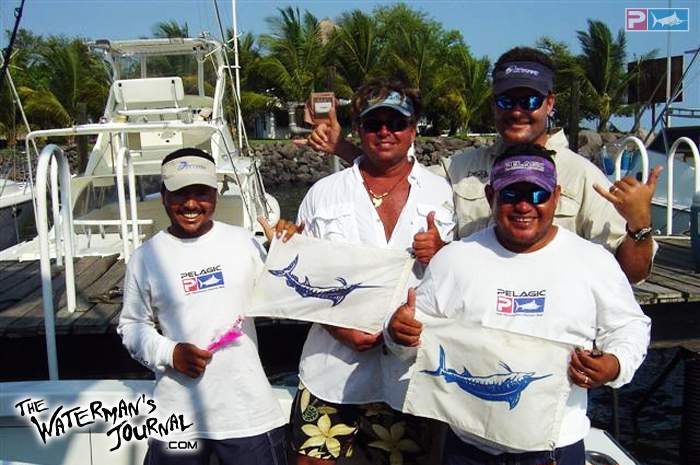 Joe O'Brien was on the fly the 20th through the 22nd. There were still quite a number of sailfish around but getting them all to tease and bite was not easy. We converted for 3 releases the first day and another 3 the second and also added a sturdy 350lb blue that second day. Joe's final day saw him release 5 sails on fly and with another perfect dropback of the mackerel he again added another similar size blue to give him two blues in two days to add to the sails on fly. Nice work Joe!!

It'd been years since we'd fished with Duke Gallagher, S. E. Ellender, Tad Blevins and Vic Tedesco and what a pleasure to have them with us again. They fished the 'Circle Hook' on the 22nd releasing 10 sails with Capt. Eddie Bariez. On the 23rd aboard the 'Decisive' they released 7 sails and a couple dorado. Mixing it up the following day we released 15 sails on bait and Duke released his first sail on the fly. With the boys revved up after having a taste of the previous days fly action we got both SE and Tad each their first sails on fly to make for a memorable trip for the close angling friends out of Homer, Louisiana.

Our long-time Guatemalan friend Philip Klose and Manuel Torres had invited Ecuadorian friends James brown, Ricardo Yarad and Robert Suber to taste Guatemalan's finest resource. The guys had a wonderful day fighting the sailfish from a dead boat, the "Ecuadorian way", releasing 13 sailfish from 23 bites, along with 3 dorado for sushimi. The following day we were joined by Christian and Peter Klose, Mikey Fernandez, and friends, splitting the group between the 'Circle Hook' and 'Decisive'. Eddie found the fish inshore on the 'Circle Hook' and released 13 sailfish while the 'Decisive' went looking out wide and didn't get on them. 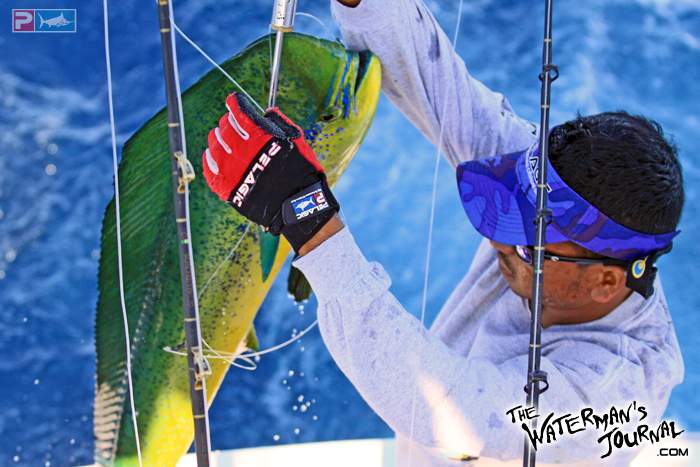 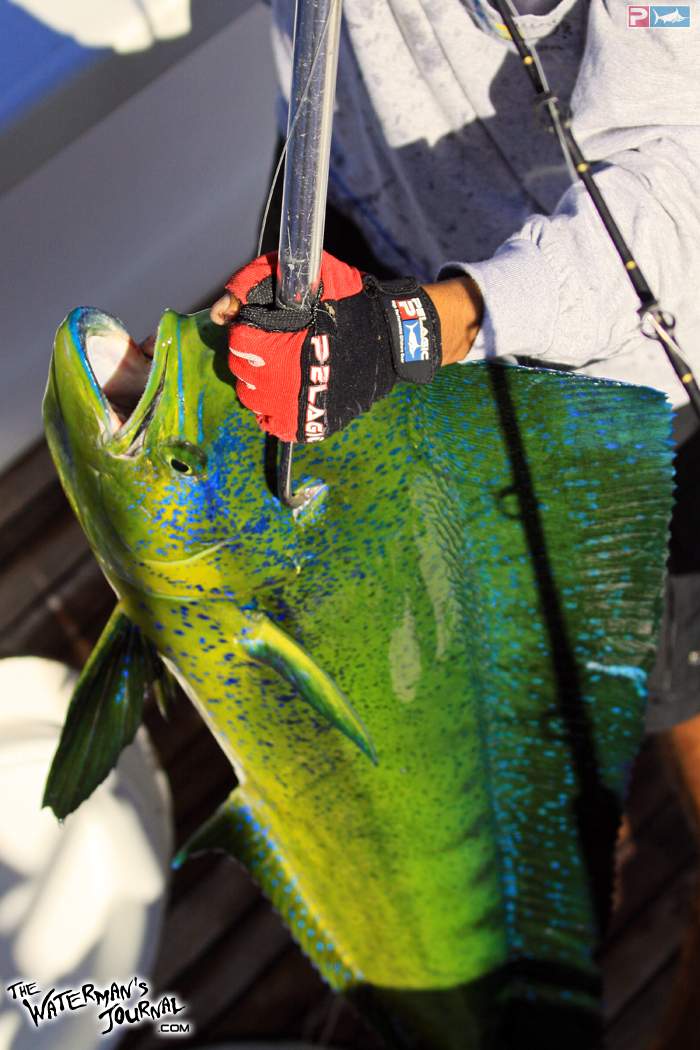 John, Rick and Eric Bailey fished with us the 28, 29 and 30th for some excellent family action. In our usual flat blue seas they went 25 from 35, 22 from 33 and running out wide finished it off with a really hot afternoon their final day releasing 44 sails from 66 bites for an unreal trip. 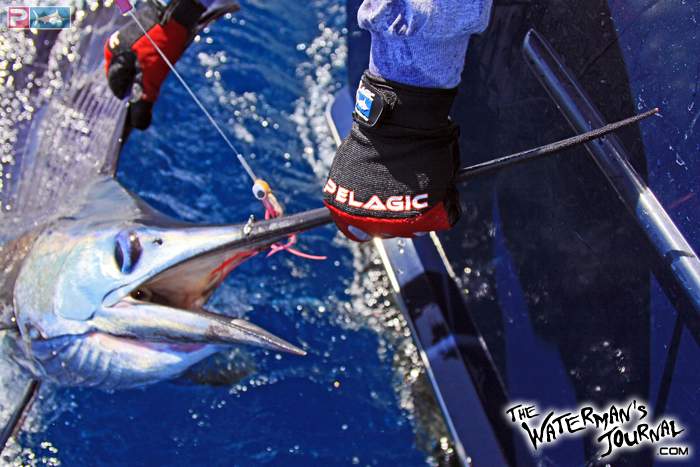 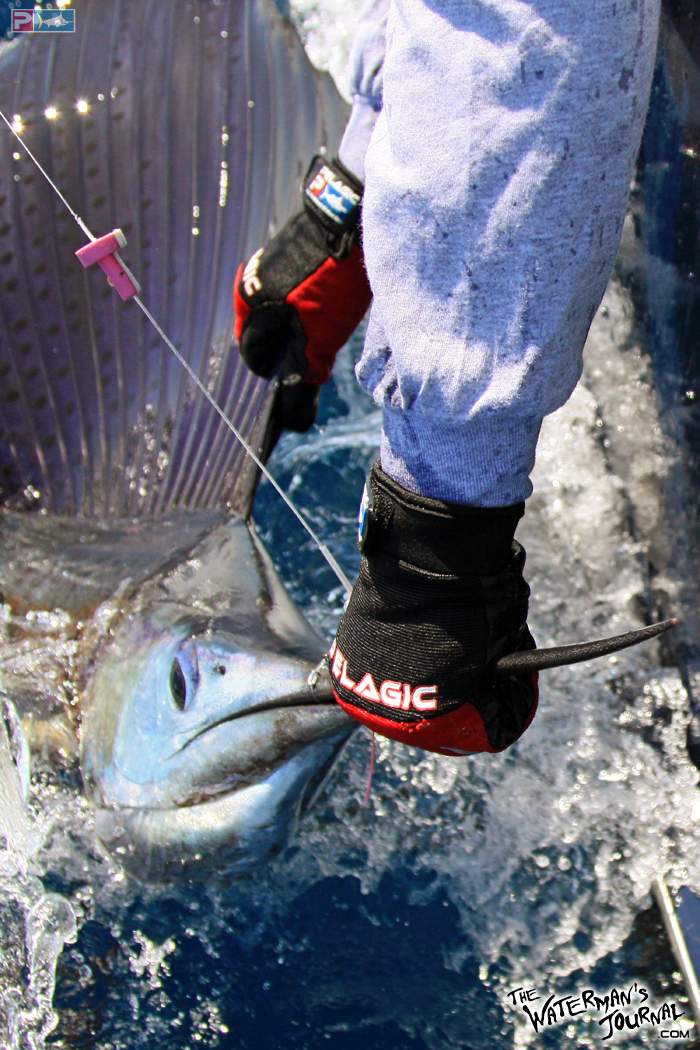 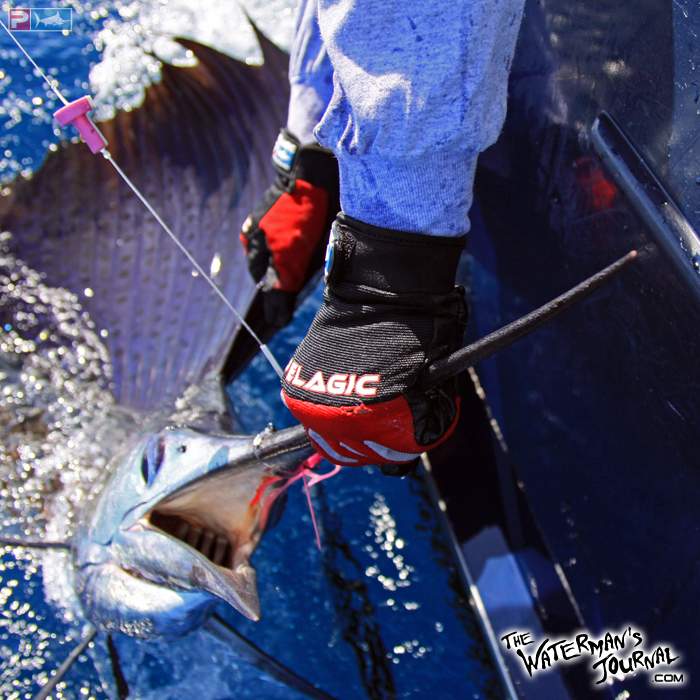 Returning to the same offshore bite the following day with Barry Fitzpatrick and John Carbone of Ocean City Light tackle Club, we saw the month out in true Guatemalan form with 33 releases from 50 bites on a huge group on fish that spread for miles. We also had a 400lb blue up on the teaser while we idled up to a hooked sail and had an exceptional bite from the fish only feet off the transom but in all the excitement unfortunately pulled the hook, but what a spectacle. With such a finish to the month and seeing probably the biggest body of sailfish we have seen here in years, cutting and feeding on the surface we are in for an unbelievable April that is going to see some big release days. 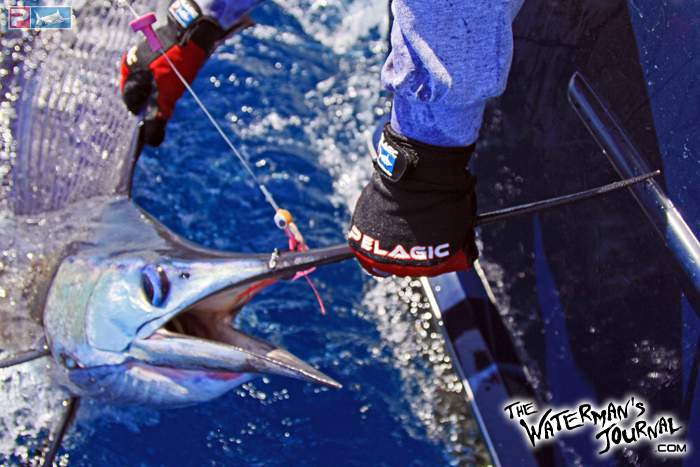 Until next report, circle hooks, tight lines and healthy releases. 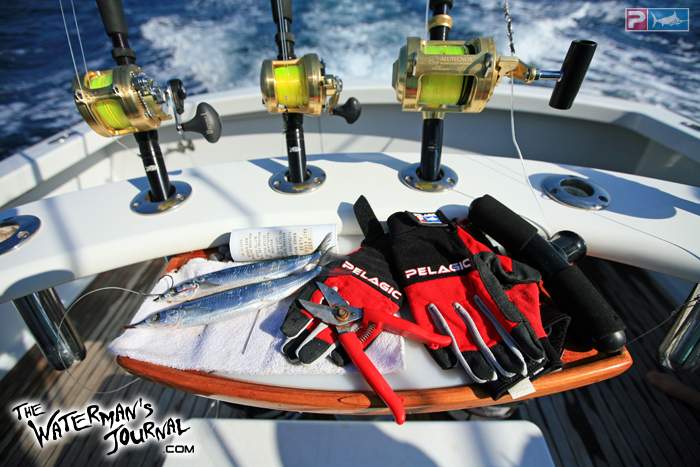 Check back often at PelagicJournal.com for more epic photos and reports from Captain Brad Philipps...

For more information or to fish with Captain Brad Philipps, check out www.GuatBillAdv.com or simply click below: