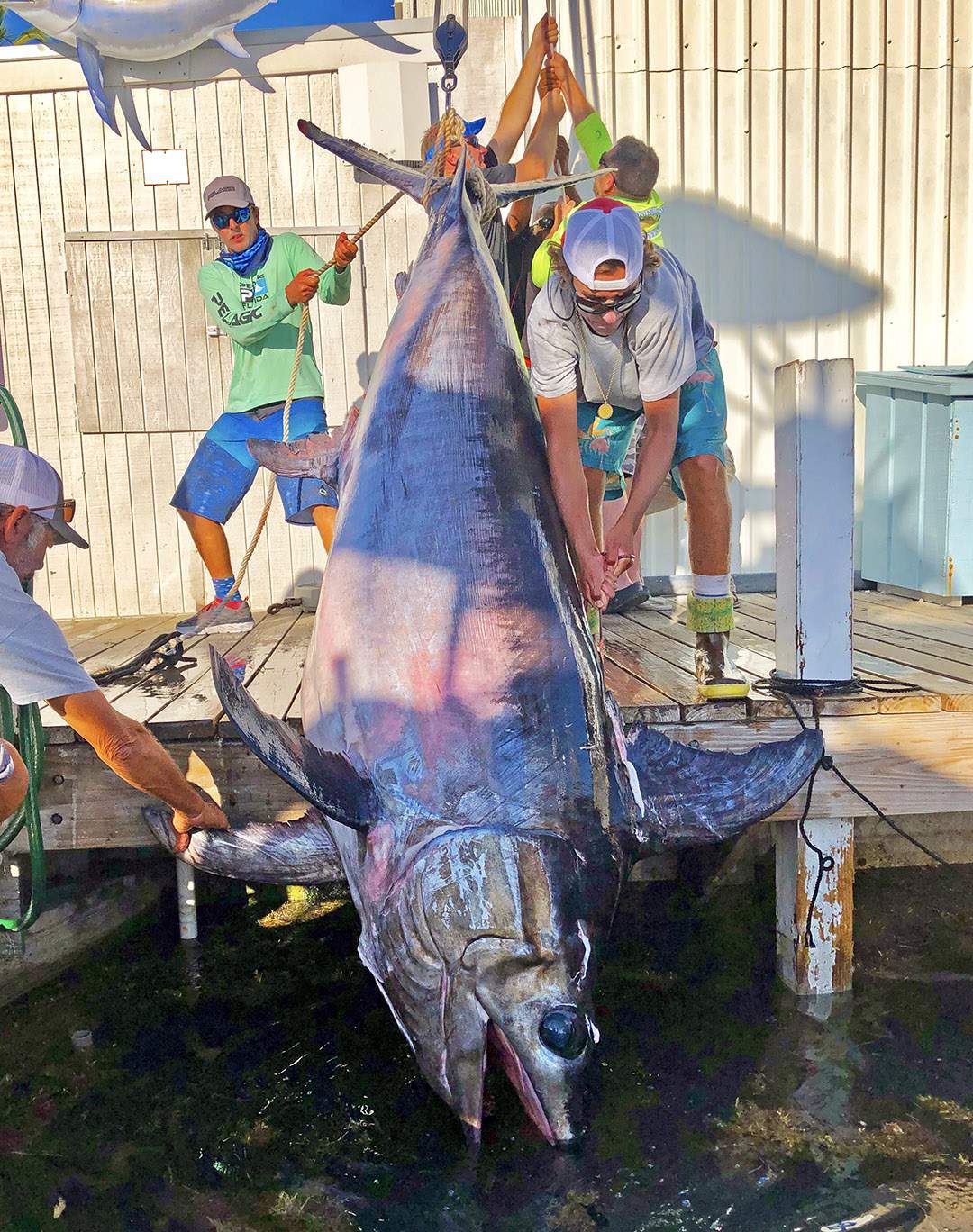 PELAGIC Pro Team Captain, Nick Stanczyk, reflects on an epic 8-hour battle with the 757.8 lb. swordfish that shocked the fishing world. We wanted to share his tale with you…

March 31st, 2019 – Bud ‘N Mary’s Marina [Islamorada, FL Keys] - The day started like any other day… I woke up at 5:30am, made a batch of oatmeal, jumped in my truck, and made the 2-minute drive to Bud n’ Mary’s Marina. I pulled in at 6:15am and my mate-for-the-day, Konnor, was there ready to load the boat. His father, Capt. Paul Ross, is a fishing legend in Islamorada; however, Konnor had never seen a swordfish caught and wanted to learn the ropes of daytime swordfishing.

We loaded the rods and ice, I rigged a few baits, and then Bill and Debbie (our charter clients) showed up ready to go. Like Konnor, this was their first time swordfishing, and they were excited to see how it was done.

At 7:00am, I plugged my target swordfish spot in the GPS, put the throttles down, and let my 37’ Freeman Broad Minded ride. Within an hour we were at the spot and I crimped the baits on the rods. We put a fresh mahi belly on the back rod and a bonito belly on the front. At 8:10am we set our baits out. We put a buoy on the back rod at 1500’ and fished the front (tip) rod right off the bottom. I gave my usual talk about what to look for when watching the rods. A bite on the tip rod would just be a funny bounce at the rod tip, while a bite on the buoy rod would either suck the buoy under or lay it over on its side.

Swordfish bait prepared to be deployed into the abyss 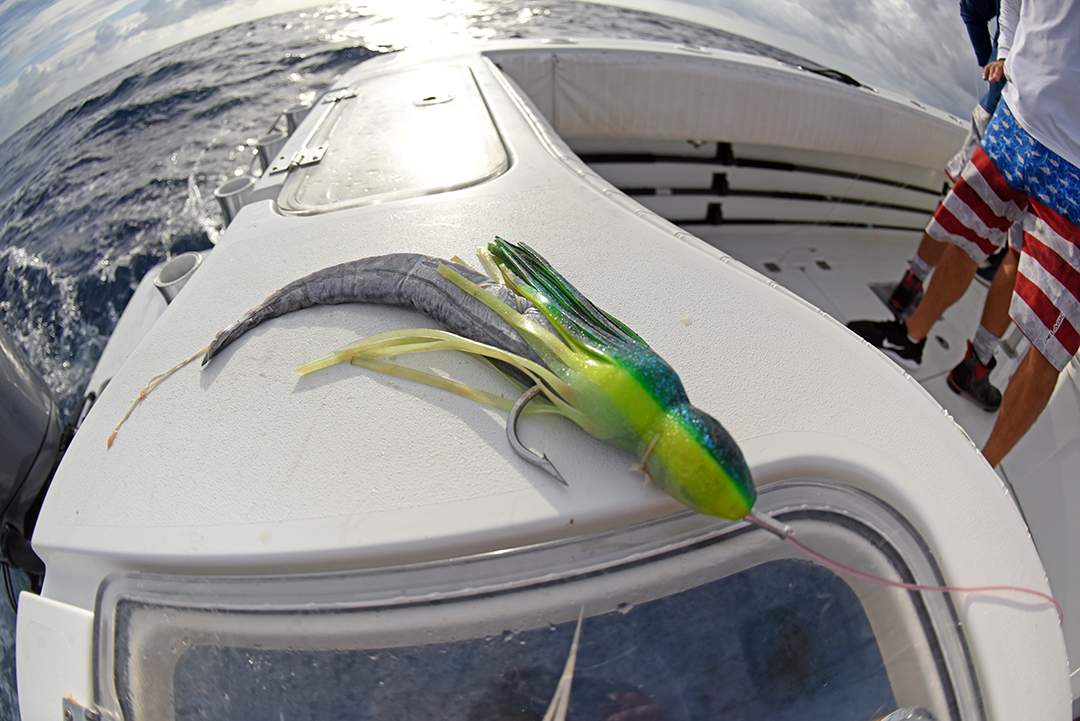 Roughly 10-minutes into the drift, I saw the buoy lay over on its side for a second. It usually bobs up and down vertically with the 8-lb. lead on the line, but when it lies over it means a fish is swimming the weight up. I didn’t say anything for a few seconds because I wanted to make sure I wasn’t seeing things. Once I was certain of it, I told everyone that we had a bite.

Bill got on the reel and Konnor cleared the front rod. The fish swam all the way to the surface and luckily, we were able to get the lead off. However, we couldn’t get a visual on the fish as it was a bit cloudy and dark out. After 40-minutes, we got the fish to the wind-on leader and I could see an electric blue swordfish swimming down deep. I told them it was big, but I wasn’t sure how big. I said it could be 400-plus-lbs., but I wasn’t able to get a great look.

The next couple hours went by quickly. The fish was erratic as it would dive deep towards the bottom and then change course dramatically and swim all the way to the surface. When the fish would make a fast run, Bill would back off the drag slightly. When it would settle down, he would bump up the drag and add more pressure with his hands on the line. 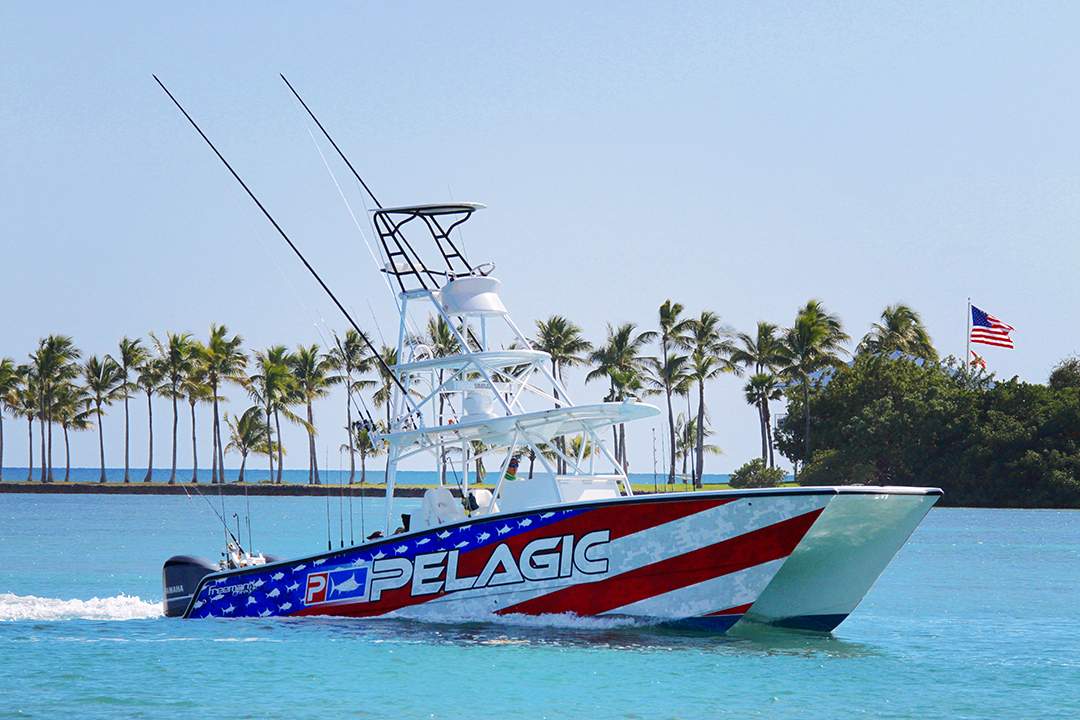 We were 4-hours into the fight at this point and hadn’t seen the fish since first thing in the morning. Bill was able to get the fish back on the wind-on leader a few more times over the course of the next hour; but, every time we got close to seeing the beast, it would take off.

Finally, at the 5-hour mark, she scoped up and broke the surface. I just saw the splash, but Bill saw the fish. I assumed we had a giant hooked up, but Bill claimed the fish wasn’t ‘that big’. I was puzzled as we were already hours into the battle, yet she hadn’t tired. I had some doubts now that it wasn’t a true giant, rather just a decent-sized fish that was foul hooked. Moments later the fish left the surface and sounded again.

We decided that we needed to really put pressure on this fish in order to tire it out, so Bill got more aggressive on the rod and reel. About thirty minutes later we had the fish near the surface and I finally got a good look at it. She was a giant! Well over 500-lbs., and maybe even over 600!

Capt. Nick rigs a squid, another favored bait when deep-dropping for swords 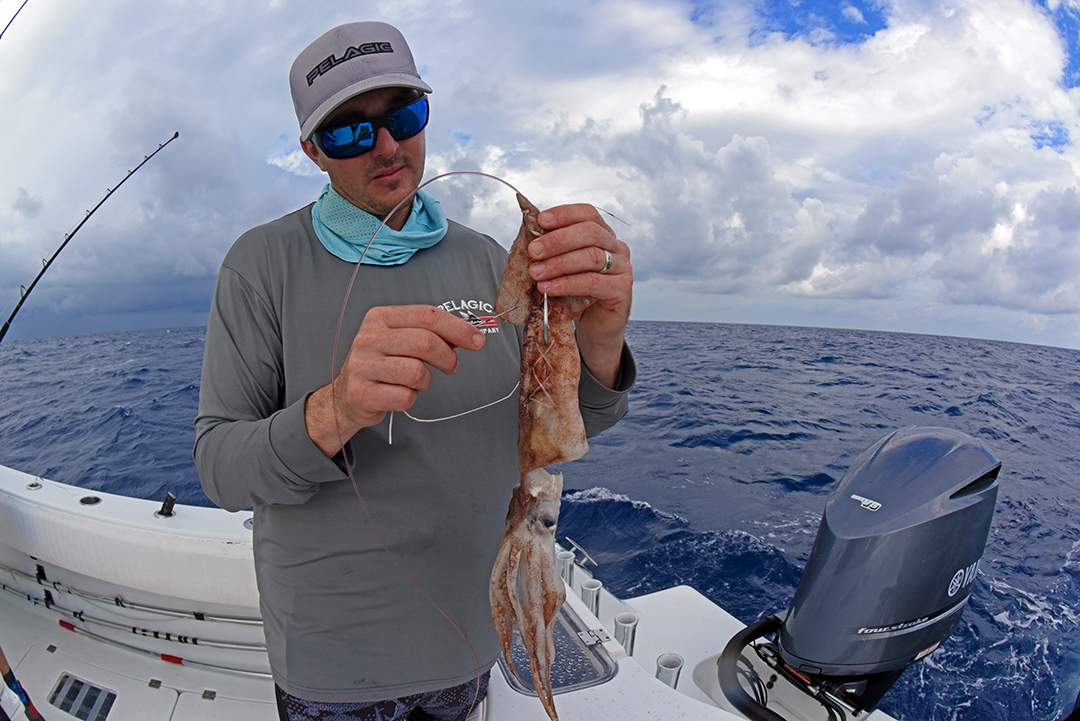 She charged the boat and I throttled up to get away. It was time to pay attention; we couldn’t afford an error on something we could control. It’s one thing to pull a hook, but another to lose a fish under the boat. Within seconds she made another run back down to 500’.

I thought we had the upper hand at this point, but I was wrong – she was still in charge. Twenty-minutes later we got the wind-on leader back and Bill was able to roll the giant on its side. We were slowly gaining line and I thought this might be our shot. We could see the electric blue 25’ down, but she got a second wind and raced back to the abyss.

I calmly said to everyone, “Just be patient, she can’t do this for much longer.” As it turns out, I lied… because an hour later she was still swimming hard, and by 3:00pm we had drifted more than 15-miles east of where we hooked the beast.

As we entered the seventh-hour, I started feeling doubtful. Maybe we couldn’t catch this fish after all? I started thinking we should’ve had 100-lb. braid backing. I worried about where the hook was and the hole it was wearing in its mouth. I was watching the floss slowly unravel where the dacron meets the mono at the wind-on leader… I was losing focus.

Today was that day and none of us were giving up!

She kept making deep dives then scoping up to the surface, and eventually we got her back on the wind-on leader. I looked at Konnor and asked if he had ever seen the movie The Sandlot . He said yes, and I explained to him that this is like the scene where Babe Ruth visits Benny the Jet and tells him he has to pickle the beast…

The Babe says, “You only get one shot to do something great. Some people are afraid to take it, and some people don’t know that the opportunity is even there.”

I said to Konnor, “Be ready on the harpoon. And, when the shot comes… take it!”

Konnor had never thrown a harpoon before, but he was ready to give it his best. A couple of minutes later the fish charged the boat and got underneath us. Bill was able to swing the rod tip out while I throttled to spin off. We avoided a near catastrophe, but unfortunately the monster sounded again… I couldn’t believe it. 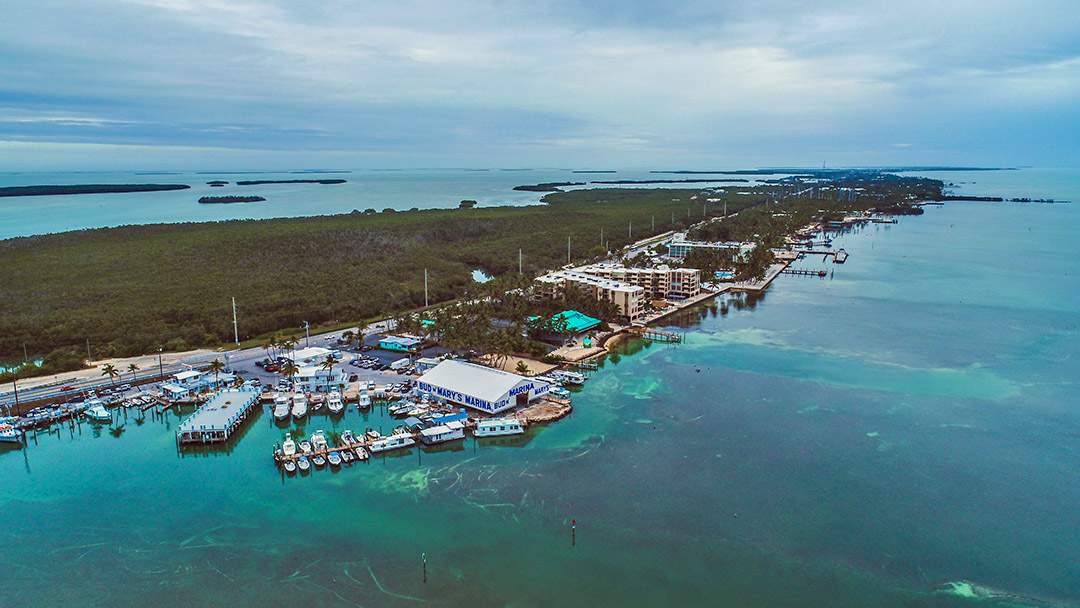 Finally, at 4:00pm we started gaining line again, and ten minutes later the wind-on was on the reel. The fish was coming at us, and we all knew that this was our shot…

It was kind of like the scene from Jaws when you know the shark is coming back one last time. Bill and Debbie were ready, Konnor was ready, and I was ready. Either we were going to catch this fish, or we weren’t.

Referencing Babe Ruth from The Sandlot again, I said to Konnor, “Heroes get remembered, but legends never die.”

At 4:20pm, this submarine-of-a-fish came at us. Bill pulled the line on the reel hand over hand, I put the boat in a slow left turn, and Konnor grabbed the harpoon. She swam at us in slow motion. The leviathan was 10’ down, and Konnor threw... It was a direct hit!

Bill pulled on the leader and I secured a second dart. It thrashed all over kicking its massive tail as water sprayed everywhere. The end of a gaff knocked Bill’s sunglasses in the water. I started losing it here; I thought it might break free. I kept my cool the entire battle until now.

After a minute, the beast settled down and we secured a tail rope. The swordfish was big, REAL BIG! We broke out the block and tackle to get the giant in the boat. I ran to the tower and tied the pulley up as high as it would go. It took the three of us to pull the great fish over the side of the 37’ Freeman. The rope crackled and the tower creaked as it came in one inch at a time.

Swordfish carry their weight all the way through their tail, making them one of the most powerful fish in the sea 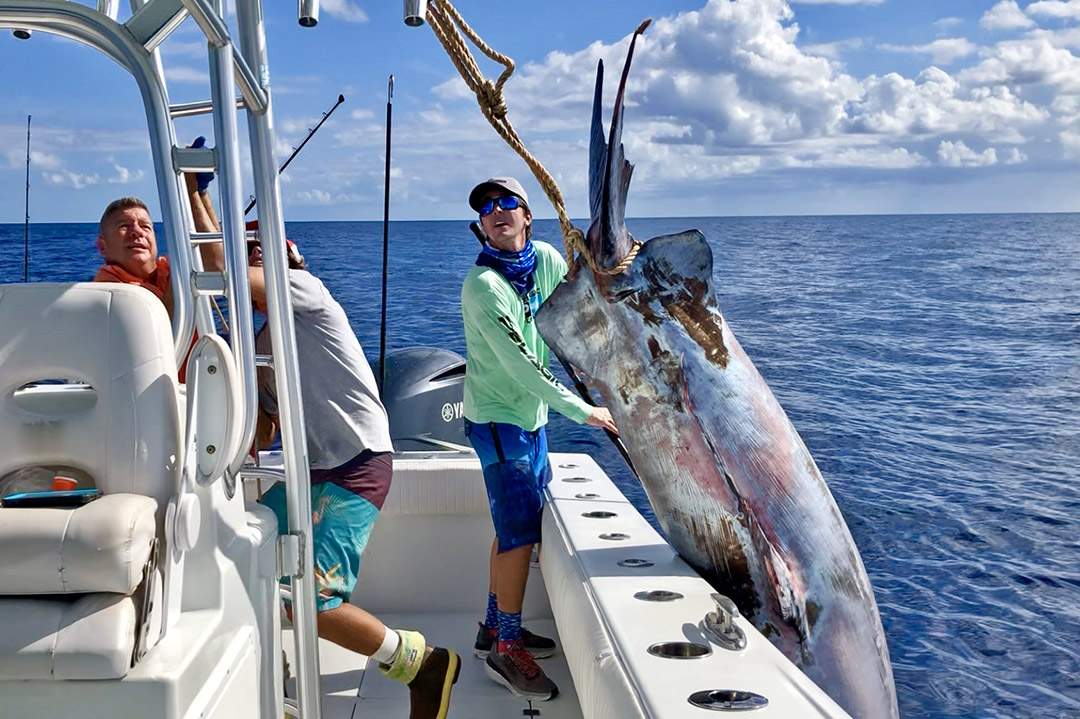 Finally, the fish hit the deck… This was the fattest swordfish I had ever seen! I caught one the year before that tipped the scale right at 600-lbs., but this one was a lot thicker through the tail. I knew it was a lot bigger.

I took a few seconds to put my hand over its massive eye and give thanks. One of our buddies said that’s the proper way to pass a fish’s soul, so I did it out of respect. It took years of hard work to finally land a giant swordfish here in the Florida Keys. We have lost so many big fish over the years, but we finally got the one I’d always dreamed of.

After celebrating, we pointed the bow of Broad Minded back towards Bud n’ Mary’s Marina and began the jaunt home. By the time we hit the dock, word had spread of our incredible catch as a decent crowd waited to lay eyes on the behemoth. 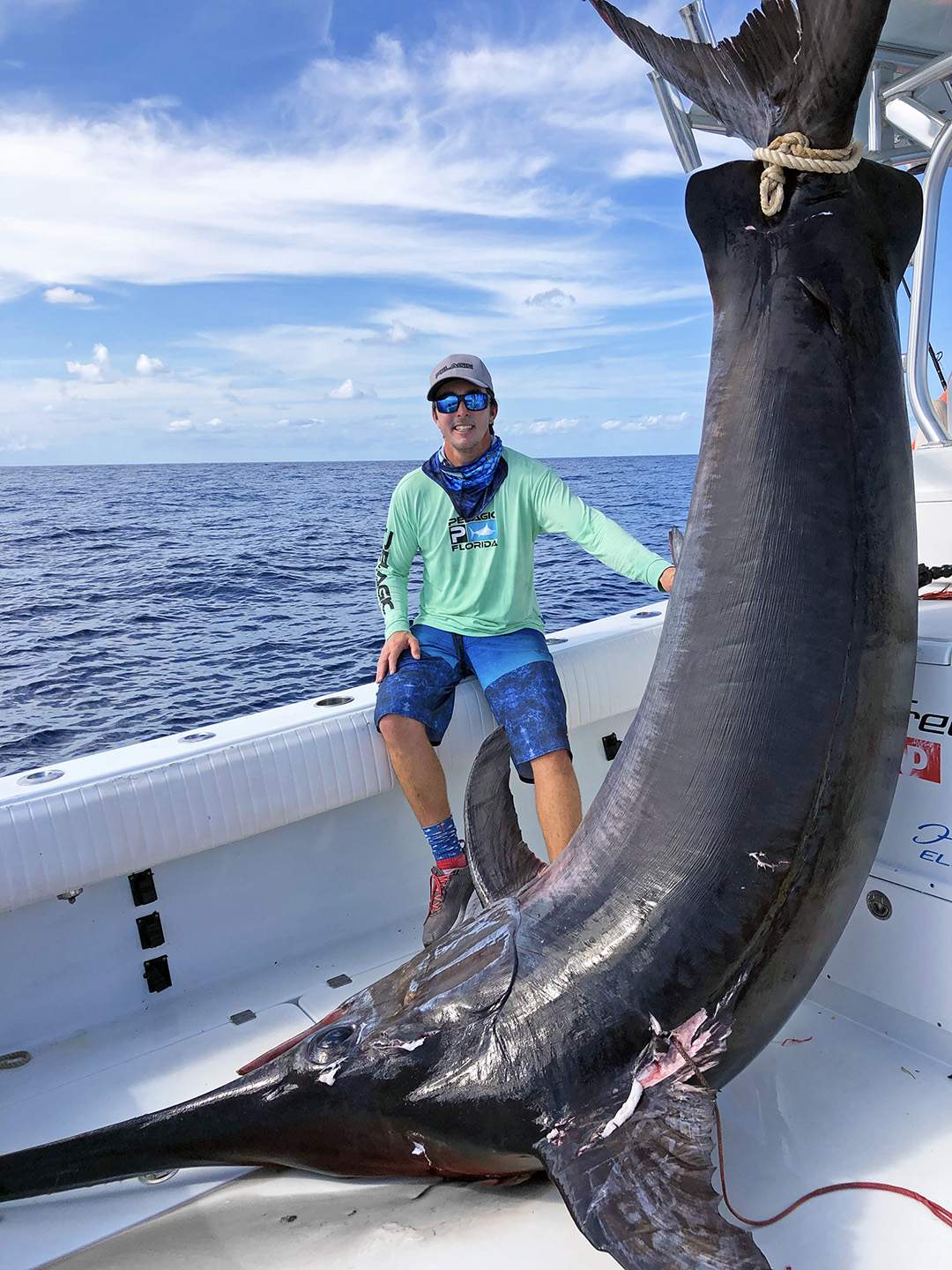 It took seven of us to get the fish out of the boat with the pulley on the corner of the iconic Bud ‘N Mary’s barn. She was massive. When we finally hoisted her up, the digital scale rested at 757.8 lbs!

The crowd erupted and it was celebratory hugs and high fives all around! It was one of the largest swordfish ever landed in the United States by recreational fisherman.

Bill, Debbie, Konnor, and I had witnessed the ultimate strength of a broadbill swordfish. These fish have endurance and stamina like no other in the seven seas. They are gladiators! 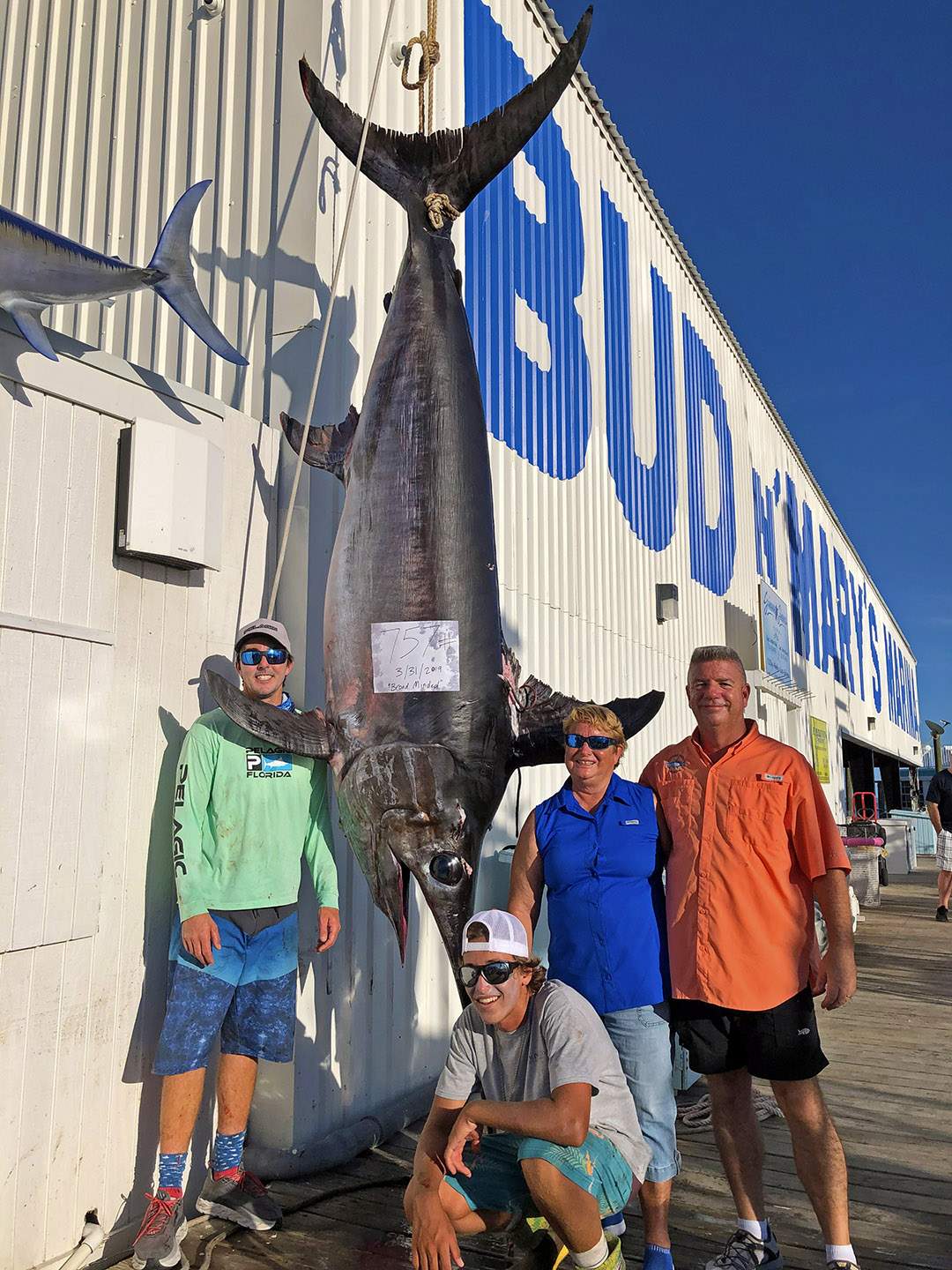 For dinner that night, I threw a few of the great swordfish’s steaks on the grill. It was the best fish I’ve ever eaten. I don’t know if it was because of the fish’s diet, or if it was simply the sweet taste of victory… but, it was good. Damn good. 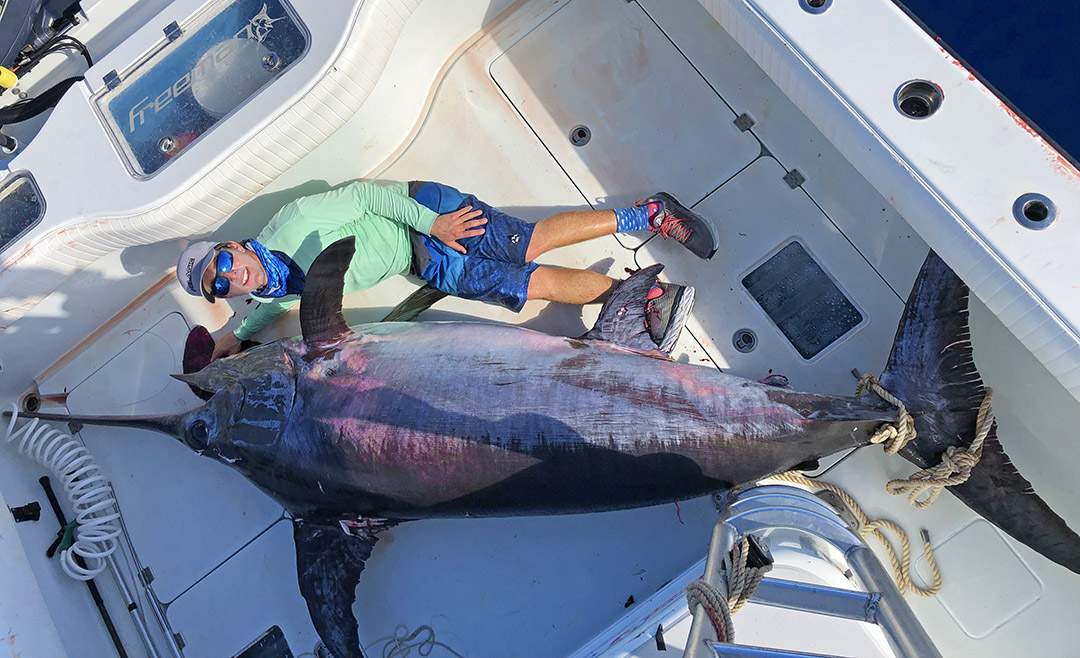