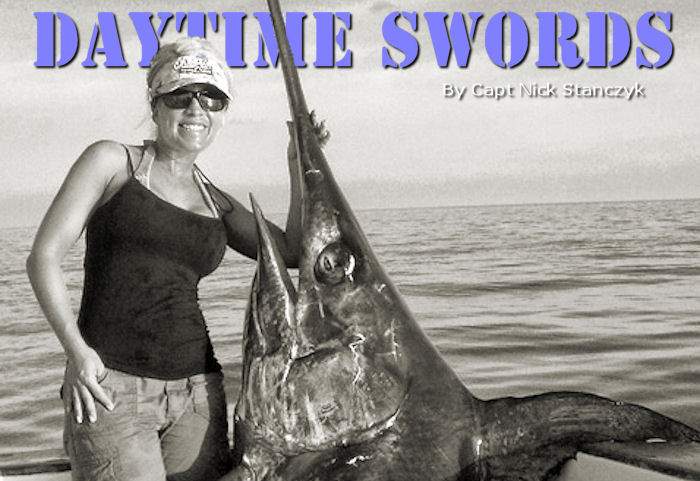 We've caught swordfish on our last 3 trips on the BNM out of Bud n' Mary's Marina in Islamorada, FL. The Catch 22 also had a great day with 2 broadbills and a mako yesterday. On the BNM we had Luke from Australia out for some daytime swordfishing two days in a row. The first drop on the first day he caught his very first broadbill which was a 113 lbs. His girlfriend Sarah also released her first swordfish at the end of the day.

Below : Tagging and Releasing a daytime Broadbill Sword .... Epic... 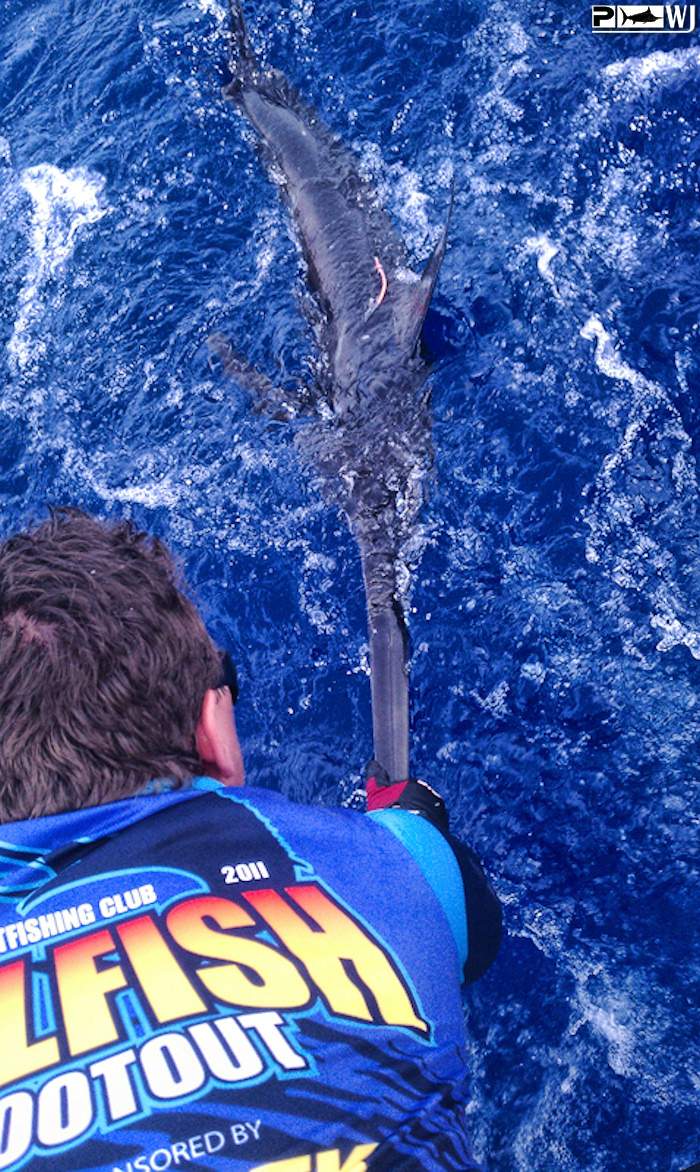 On day two we had a very slow morning. Finally late in the afternoon we had a solid hook up with a nice sword. I didn't realize the fish was as big as it was until I saw him racing around the boat lit up with an electric blue colored back. After a quick swim on top the sword went down 700 feet and Luke went to work. After 1 hour and 30 minutes we had the gaffs into a fat 248# Broadbill! Congratulations Luke!

Below : All smiles with another quality Daytime Swordfish... 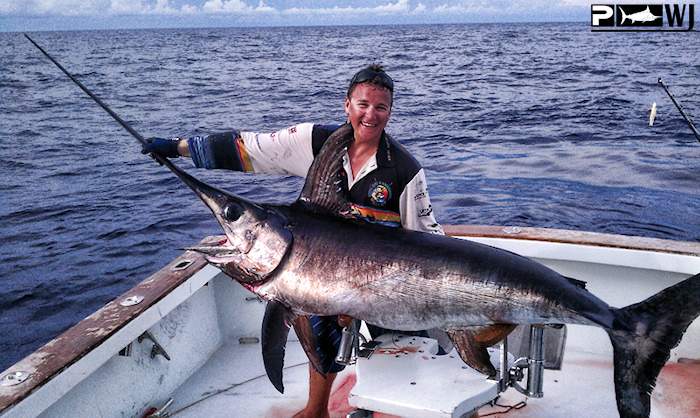 We then had John and Pam aboard the BNM out of Bud n' Mary's Marina in Islamorada, Florida for a Florida Keys Fishing Trip on 9-24-11. Pam insisted they were lucky and we were going to catch a swordfish guaranteed. I told both of them we had a good shot, but there had been quite a few small fish around which can be very frustrating when trying to hook them in the daytime. John is a Navy vet returned to the U.S. and was very much looking forward to a fishing trip! Well it wasn't long until their luck kicked in, on the way out at 15 knots our high speed lure starts screaming and 10 minutes later John catches his first wahoo, a nice 28 lber. I was thinking at least we didn't get skunked today.

We continued out to the swordfish grounds and a few miles inside we found a nice weed line with some mahi on it. We hit one school and caught 15 nice schoolies and a couple small gaffers. Both John and Pam were all smiles and I though maybe they wouldn't even notice if we didn't catch a swordfish. An hour later we were on the bottom in 1500' drifting for a broadbill. After 30 minutes we hooked up, the fish seemed small, and after 10 minutes he threw the hook. We make another drift in the same area, but after an hour with no bite, we wind up. I run a few miles south and drop again. After 45 minutes without a bite, we get ready to wind up, and there she is. We're hooked up to a daytime sword.

John gets in the chair and goes to work. After an hour I see the fish, I know she's big, but not quite how big. The fish dives all the way back to the bottom and John goes back to work. At 2 hours he has her near the boat again, I see the swivel behind her tail and realize the fish is foul hooked in the belly somewhere. After a couple quick loops the fish goes back to the bottom. Now we're 3 hours into the fight, and John gets the fish within 50' of the boat again, we get a quick glimpse, but down shes goes. At 4 hours into the fight, and everybody exhausted, John gets the fish 10 feet away! We get a harpoon shot, but it pulls out after a few seconds. The fish looks like it's getting tired though, but still dives back to the bottom. We've drifted 11 miles now and John has been on the fish 4 and 1/2 hours! It looks like the fish is dying, since we've been trying to pull her backwards, but she still keeps swimming. The fish makes one last dive, down to 700', luckily not the bottom again, and then races back up. I look at the clock and realize we've been on the fish 5 hours. Before I know it the fish is at the back of the boat, I run back, throw the harpoon in her, hit her with a straight gaff, Pam hands both Matt and John the other gaffs, and we get all of them in the fish. But she isn't done yet. For 5 minutes she kicks and throws water everywhere next to the boat. Finally the fish is subdued and we bring her through the door. It was the hardest fight I've ever seen on a swordfish.

Below : Bringing in a massive Sword to the docks for the official Weigh-in.. 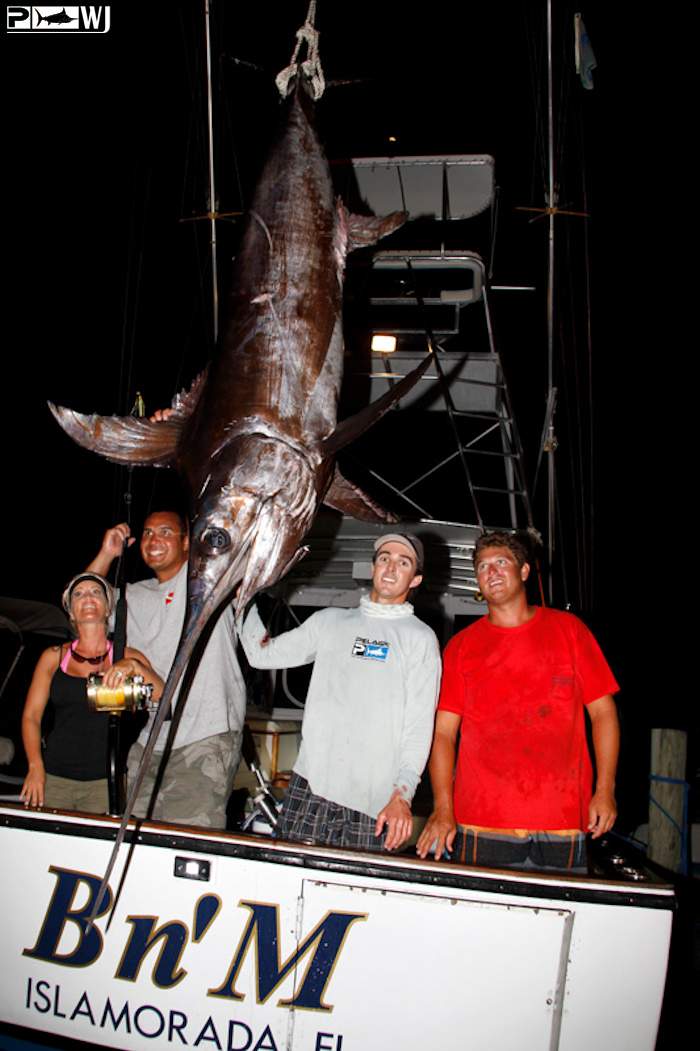