A Battle of Goliath Proportions 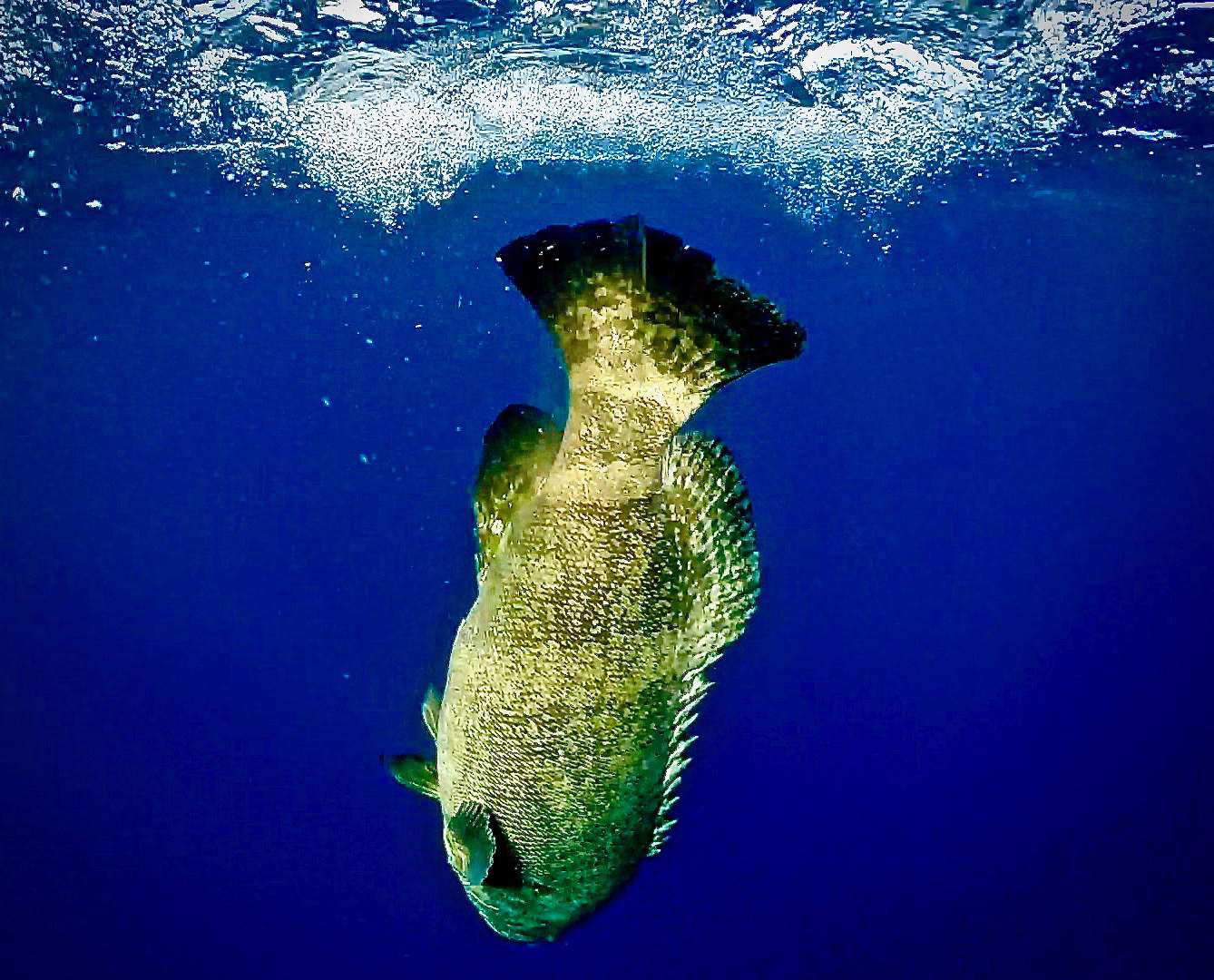 It was on a calm January day that NFL hall of famer Warren Sapp and I decided it was time to chase some sea monsters off of St. Pete Beach, Florida. Armed with literally some of the heaviest tackle known to man, baitwells filled to the brim and nothing but miles of glossy Gulf of Mexico ahead of us, we charged offshore at full throttle.

Our destination was a sizeable shipwreck that had nearly been overrun by some truly mammoth creatures of the deep. The territorial behemoths had gobbled up nearly everything else in the area and had become so brazen that they were regularly chasing away experienced divers off of the wreck! A fish capable of that that must be as massive as they are aggressive and we were eager to do battle with them. This fish of course could only be the largest grouper known to man, the goliath grouper. 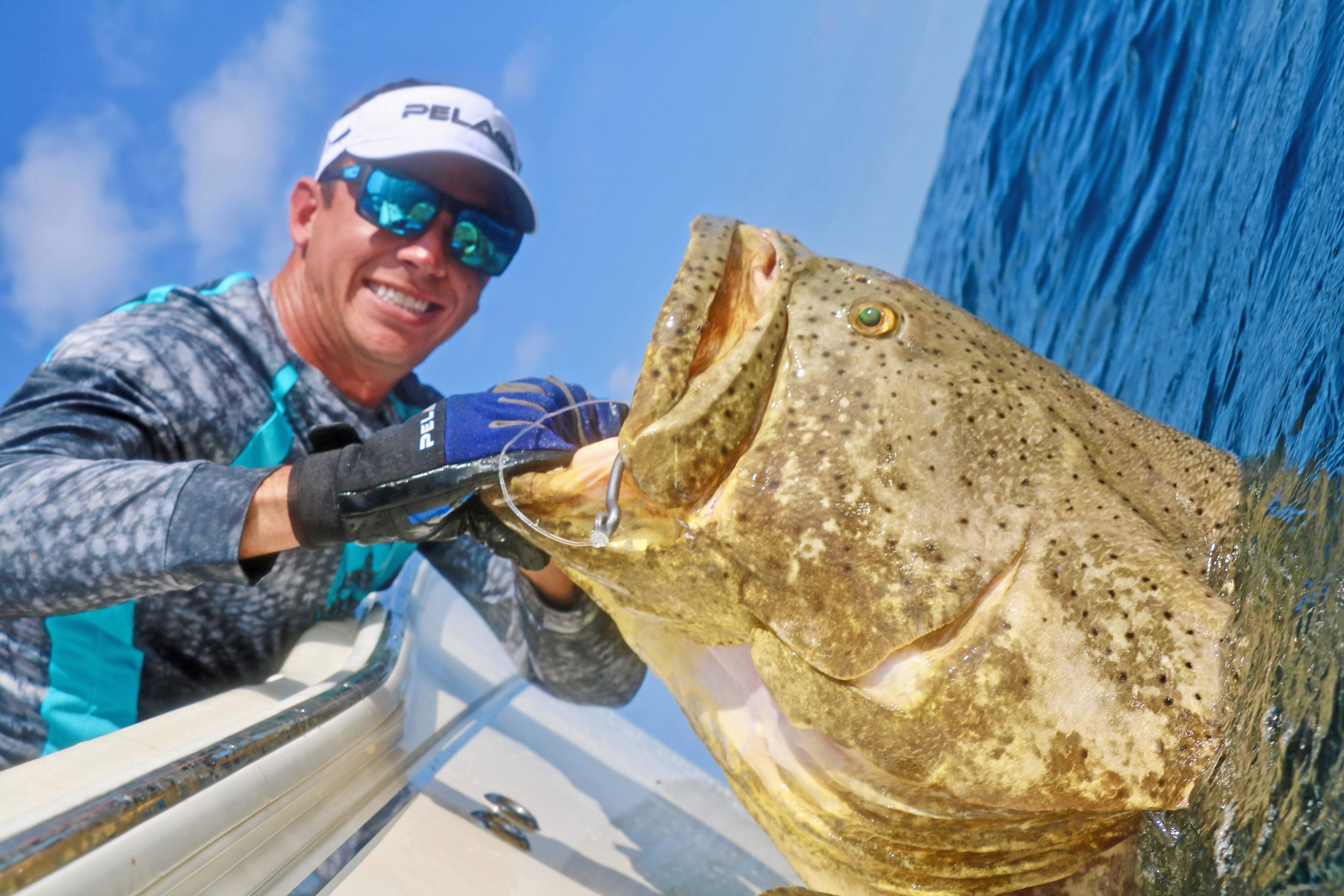 On the way out I explained to Sapp that the largest goliath grouper (formally known as the jewfish) ever recorded was shot by a spear fisherman in the Florida Keys and weighed in at a whopping 863 lbs, though there are some reports of fish over half a ton! I even heard a story of a guy that had his jeep pulled off of a bridge by a true monster after attempting to catch it using a cable wench. Whether that’s true or not one thing is for sure, a grouper that size can generate some serious torque and certainly demands the highest level of respect! I also knew Warren Sapp made a good living eating massive NFL offensive linemen for breakfast so I was curious to see how he would hold up going toe to toe with the biggest baddest grouper on the planet! It wasn’t long before we arrived at the wreck. 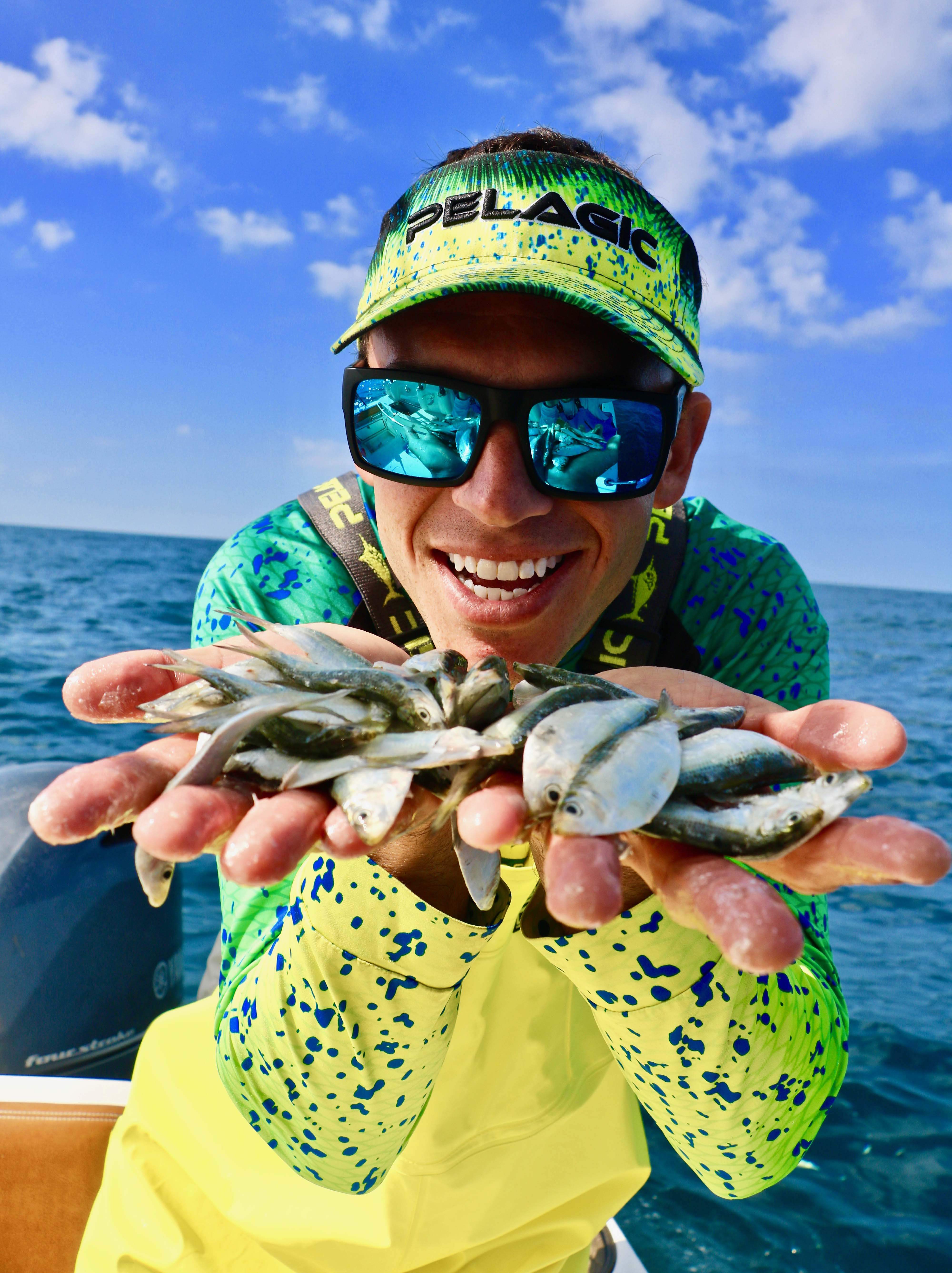 Once anchored it was time to get the food chain started by throwing healthy handfuls of dead bait and live sardines all around the boat inevitably ringing the dinner bell for all of the wrecks inhabitants. It didn’t take long before we had schools of bonito, amberjack and a whole list of other goliath grouper snacks lighting up the depth finder. We quickly loaded up on 5lb-10lb bonito to use whole and butterflied as bait and it was time for the main event! 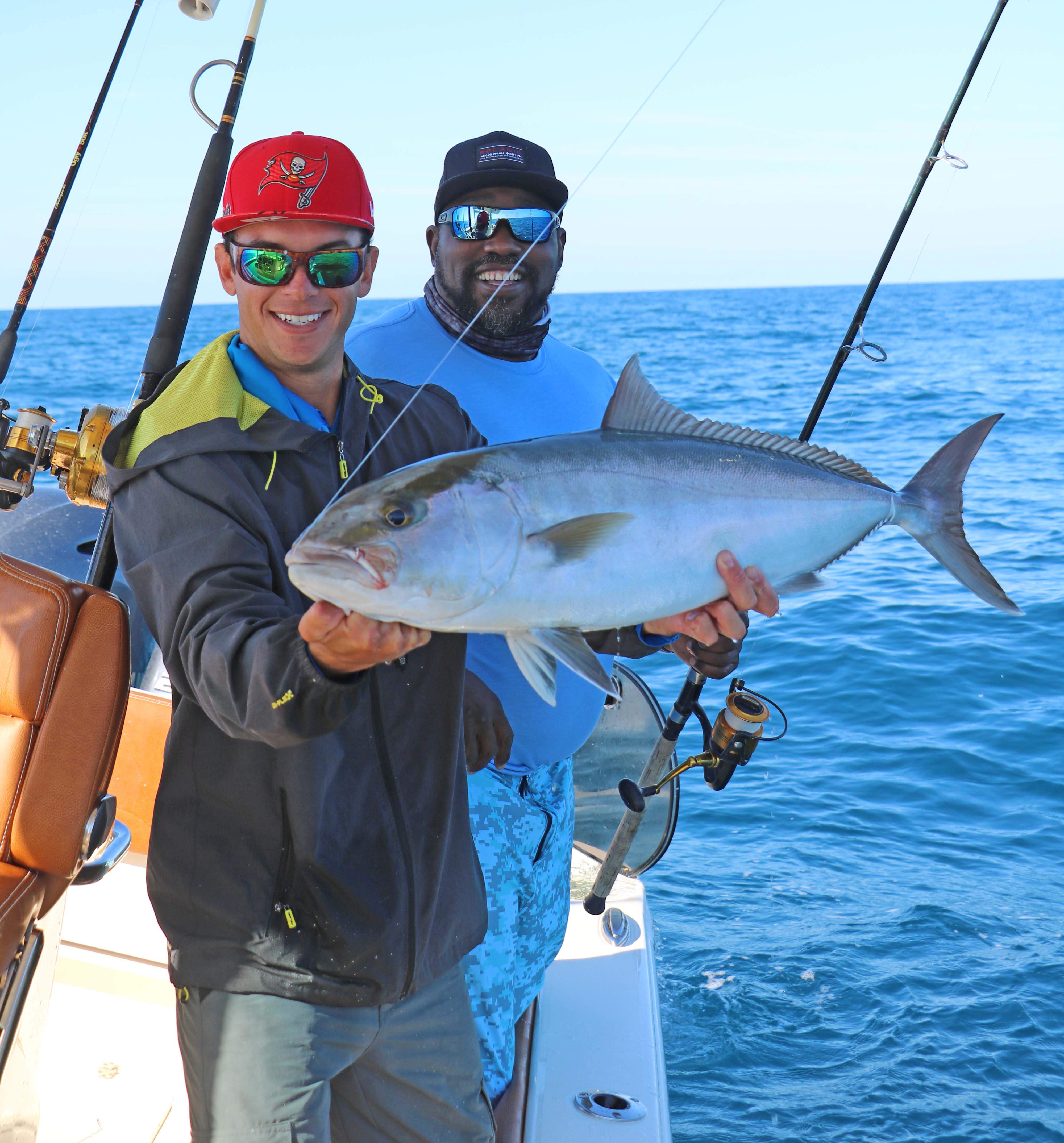 Instead of rod and reel, our tackle consisted of a good pair of pelagic gloves, a 20/0 hook and some paracord tied to a boat cleat! Instead of doing battle with conventional tackle, we were going to handline the beasts!

On the first drop, I was explaining to Sapp how important it was to keep the cord tight as he was threading the cord through his hands when the line jolted with an electrifying thump! To my surprise, all of the action around the boat had brought a monster goliath up off of the bottom to engulf the bait just a few feet below. He pulled on the line with all of the strength one would expect from an NFL hall-of-famer, but he was all but powerless against this giant fish! He had to allow the cord to slide through his hands all the way until it came tight to the cleat. As the monster continued to surge, the boat began to list to the side and we could all see that the 750-lb. paracord was under immense strain. 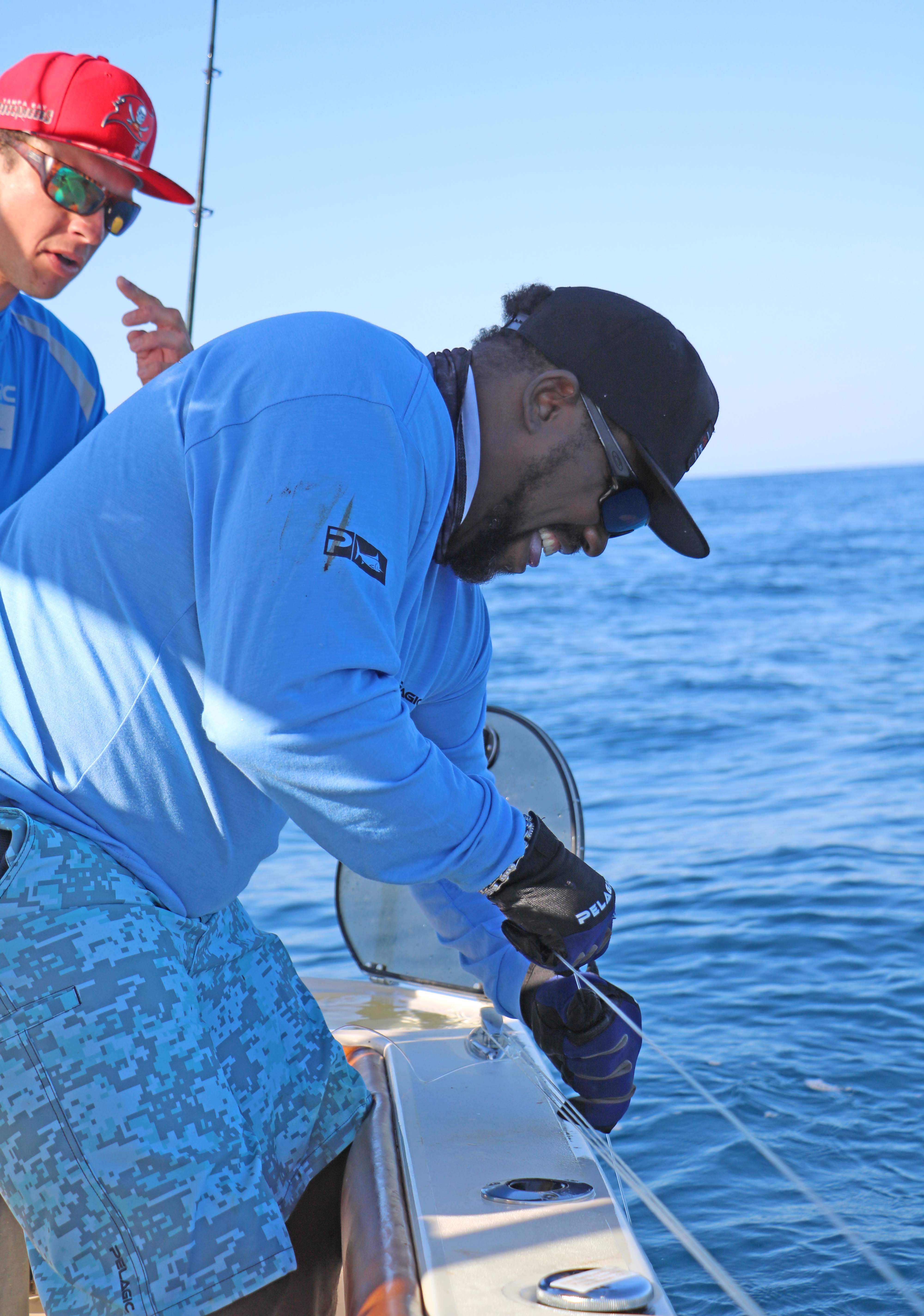 When the cord snapped the boat rocked and it sounded like someone had fired off a rifle shot! To my absolute astonishment, the brand new piece of paracord rated for 750lb test couldn’t handle the immense power of the presumably massive goliath grouper that it was connected to and snapped! I couldn’t believe it! Let me tell you, whether its football or fishing Warren Sapp does not like to lose!

Time for plan b. With nearly all of the paracord gone, all we had left that could handle a goliath was one spare spool of 400lb fluorocarbon so I rigged up another 20/0 circle hook and tied it to the cleat for round two. As soon as the next butterflied bonito hit the bottom, BOOM! It was game on for Sapp. 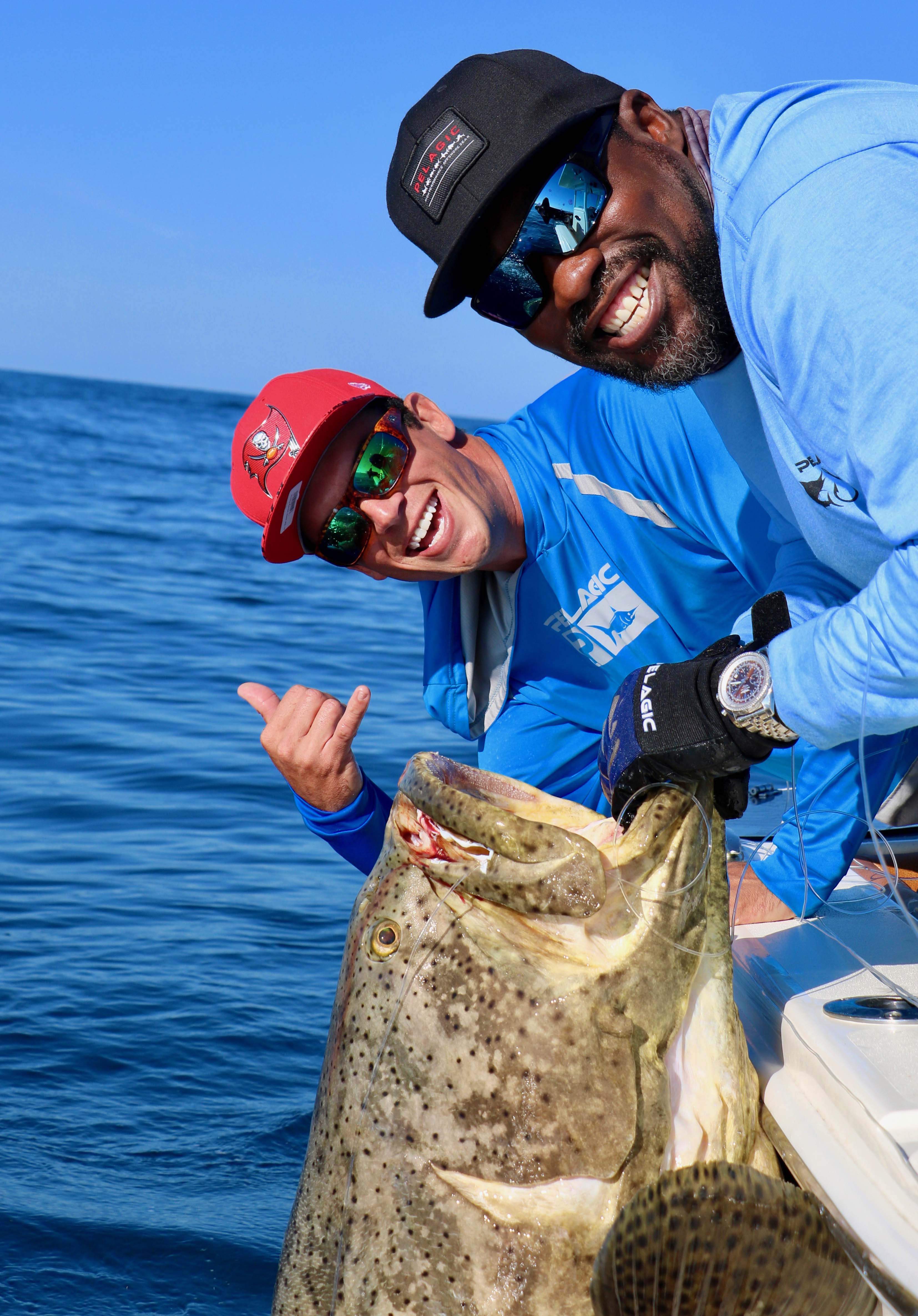 All I remember was a ton of hooting, hollering, grunting and all hell breaking loose as Sapp took part in an epic tug-o-war with another big goliath! This time however he was able to make some headway. After an immense struggle, the goliath finally rolled over and gave up. Sapp was pumped! He had caught some big goliaths before but he had never gone "mono y mono" with one. At around 250 lbs. it was a solid fish though not a giant by goliath standards. After a few quick pics we sent the mid-sized beast on its way. Then it was my turn. 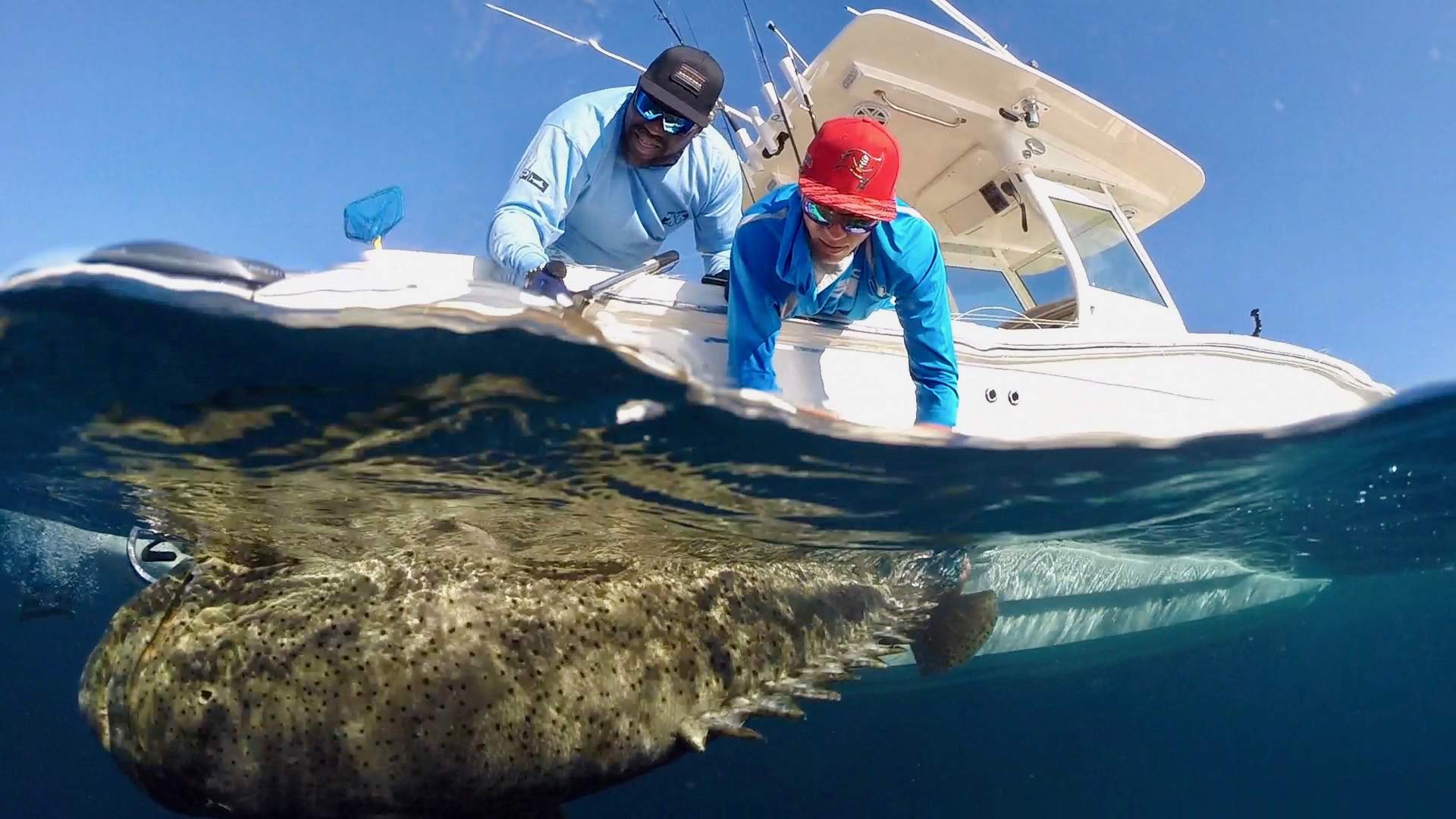 I hooked up the biggest bonito we had and sent it to the bottom. It laid there for no longer than a couple seconds before it felt like it got hit by a truck! As I pulled up on the line I was immediately pinned to the rail. Then the boat began to list as the stern actually started to lurch in the direction of the wreck. Incredibly, a few seconds later it made it to the structure and I could tell that the beast was buried in it. The fish had literally pulled the boat! Sapp joined in on the battle but even our joint efforts did nothing to budge the great fish out of the wreck. It had to be a big one to pull like that and I wanted this one bad. That left us with one option. We were either going to pull it out with the boat or break the 400-lb. trying!

I fired up the engines as Sapp pulled in the windless anchor and started to idle away from the wreck. We were definitely pinned for the first few seconds but the momentum of the boat eventually pried the giant fish away from his domain and I knew we had a shot. I decided to tow the fish a good 50 yds from the wreck ensuring there was no chance it could make it back to it while leaving the engines on just in case. Then I went to work on the monster. Despite dragging the boat, burying itself in it for minutes and being towed a good distance, the goliath still had plenty of power and I knew we had a monster. Pulling on the beast with everything I had, I walked the line from cleat to cleat until I could see a mass of mottled yellowish brown color below. The good thing about goliath grouper fishing is that once you finally get them off the bottom, you got’em. 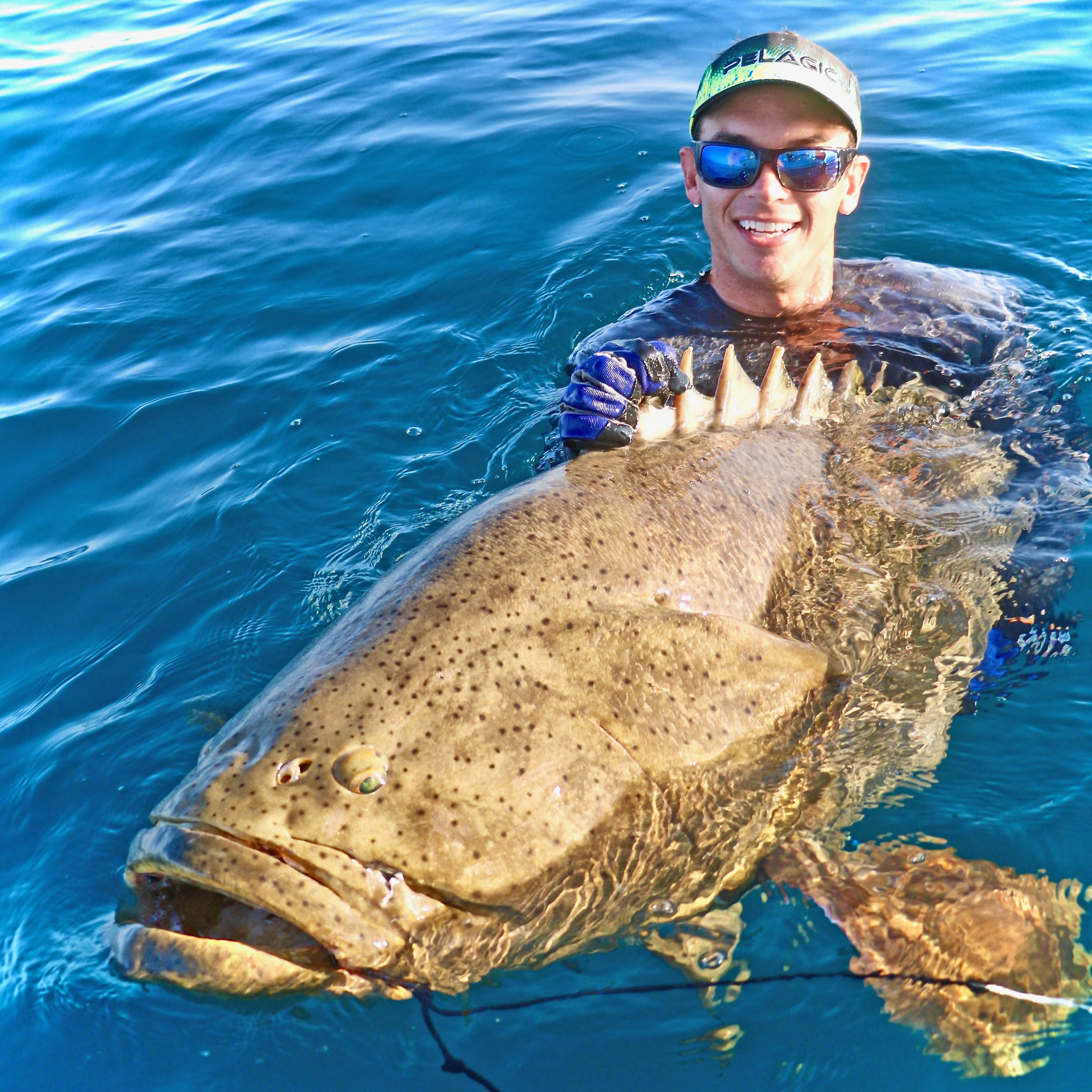 With the massive goliath laying boatside I was elated to see that it had to be the largest one I had ever caught! It had a length of around 7 ft. and I estimated the fish to be somewhere between 450 - 500 lbs! I got in the water for a once in a lifetime photo opurtunity then swam around with the massive fish for a minute to pump oxygen into its gills and in one quick burst it charged back to the bottom. We had done it! We had caught a truly giant goliath grouper on a handline!! Sapp and I enjoyed a celebratory beer and we headed back to the dock victorious!