The 2019 Pelagic ROCKSTAR Offshore Tournament saw 52 teams compete for over $500,000 in what is now "Central America's Richest Fishing Tournament". The fleet released a staggering 424 sailfish & marlin, while keeping the weigh station busy with plenty of dorado & yellowfin tuna over the course of an action-packed, two-day, offshore extravaganza.

January 13, 2019 – Marina Pez Vela [Quepos, Costa Rica] – At day’s first light, a quiet harbor came to life as fifty-two tournament teams, anglers, and crews assembled in anticipation for what has quickly become “Central America’s Richest Fishing Tournament”. As the sun rose above the lush, rainforest canopy adjacent to Marina Pez Vela, a choreographed procession of participating vessels – both large & small – exited to the Pacific, greeted by the vibrant tunes of a solo, heavy-metal guitarist. The clock struck 0700 and engines purred as inboards and outboards throttled up in a race to the fertile, bluewater grounds in hopes of capitalizing on Costa Rica’s incredible offering of game & billfish species. The 3rd Annual PELAGIC ROCKSTAR Offshore Tournament had begun…

Team BIG OH takes the Billfish crown and a check for $122,400 // The fleet waits in anticipation for the shotgun start // The Kin Rivera Band rocks the Marina Pez Vela stage. 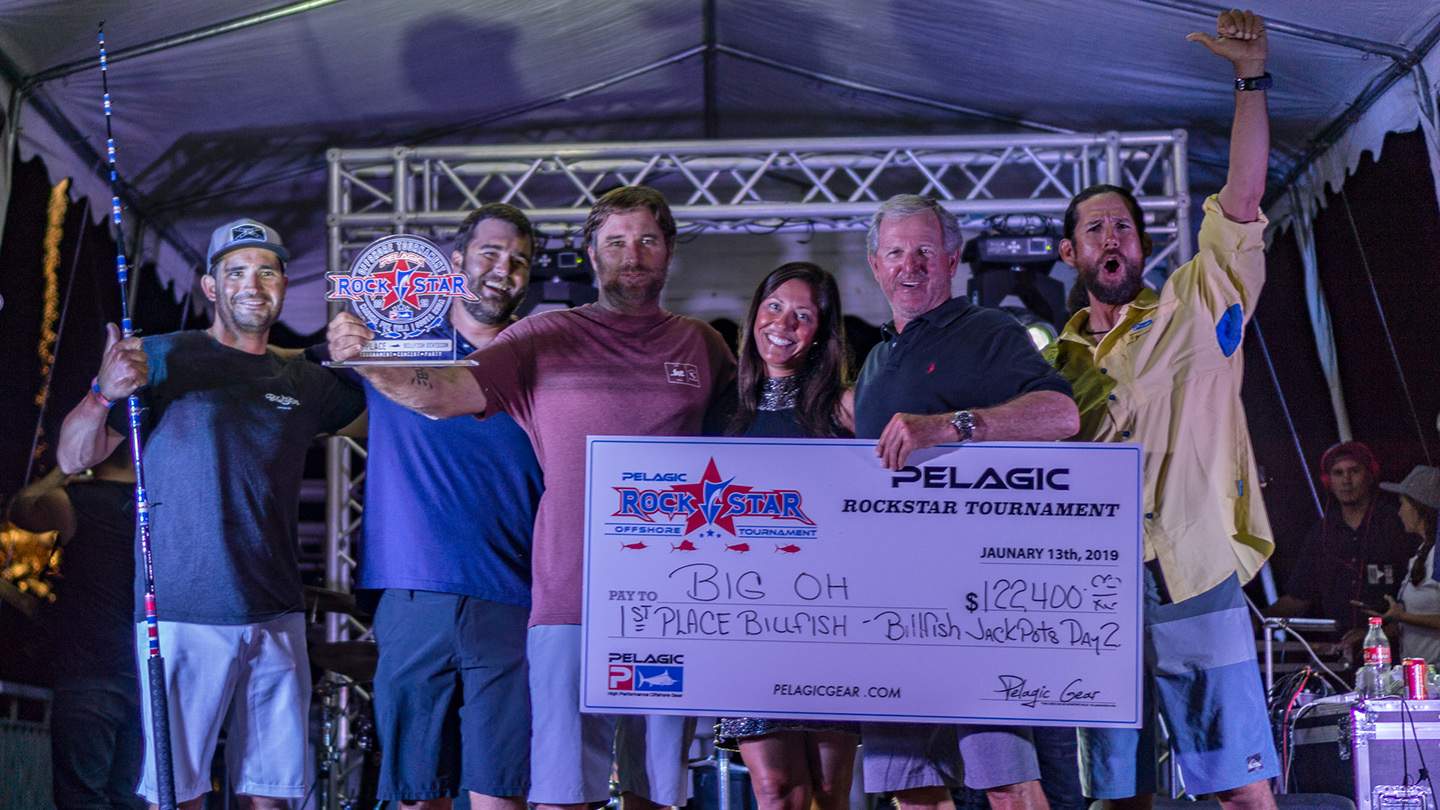 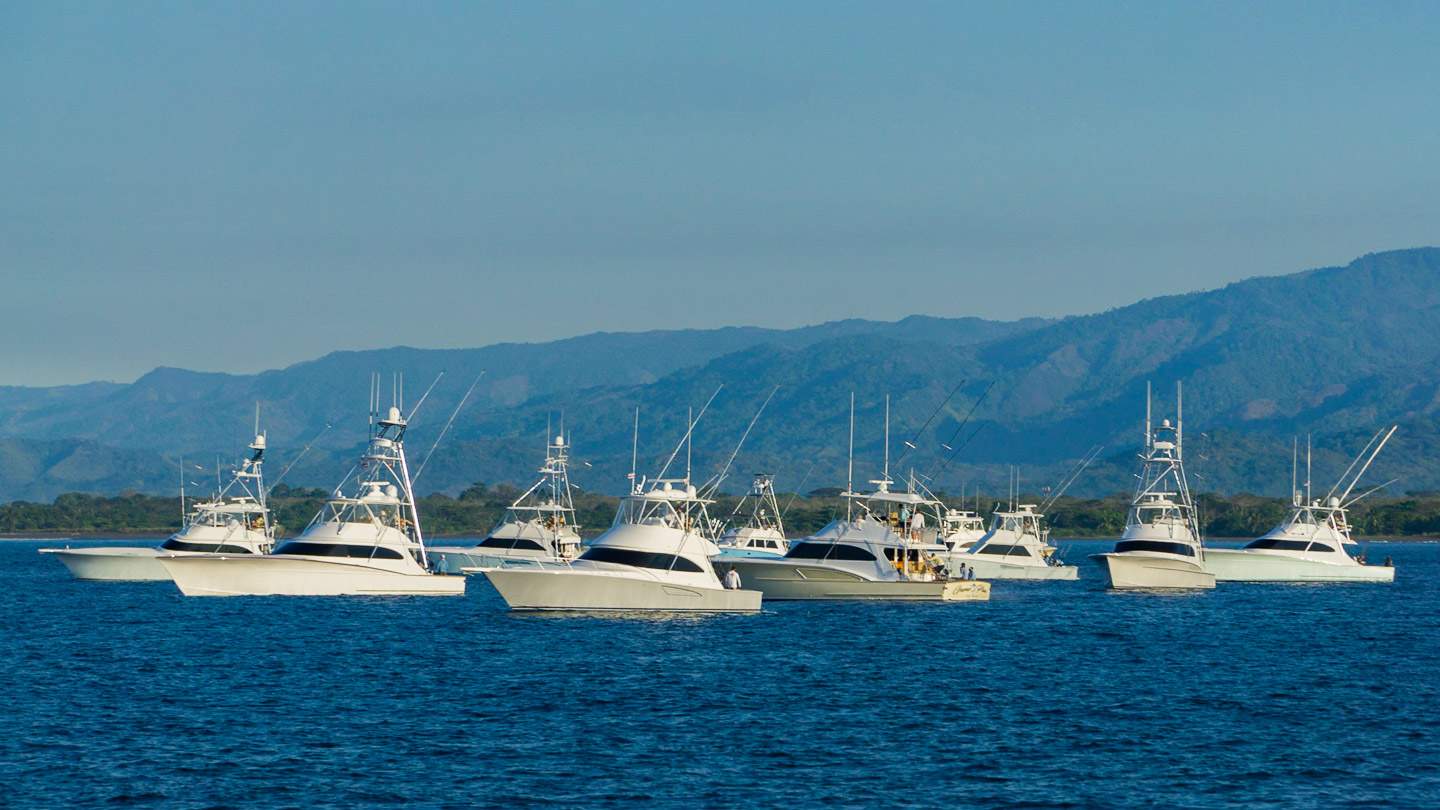 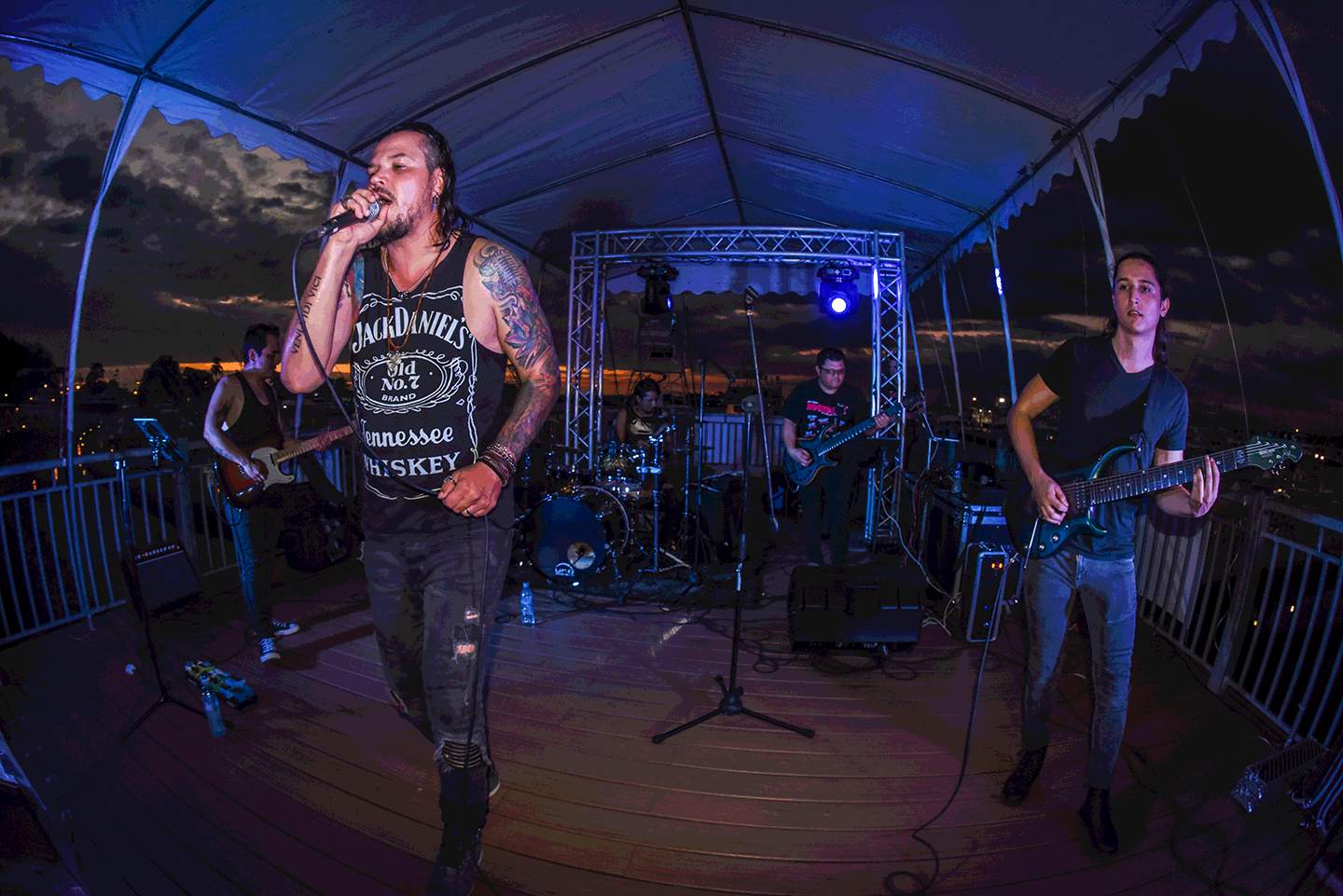 The ROCKTAR Offshore Tournament is a team event held annually each January which focuses on the diverse variety of species available in the waters of Pacific Costa Rica. Featuring multiple marina-side bashes, live rock ‘n roll concerts, and an offshore tournament extravaganza, the ROCKSTAR is the event both new and savvy tournament teams look forward to every year.

It's go time! The always-incredible sight of the ROCKSTAR tournament shotgun start. 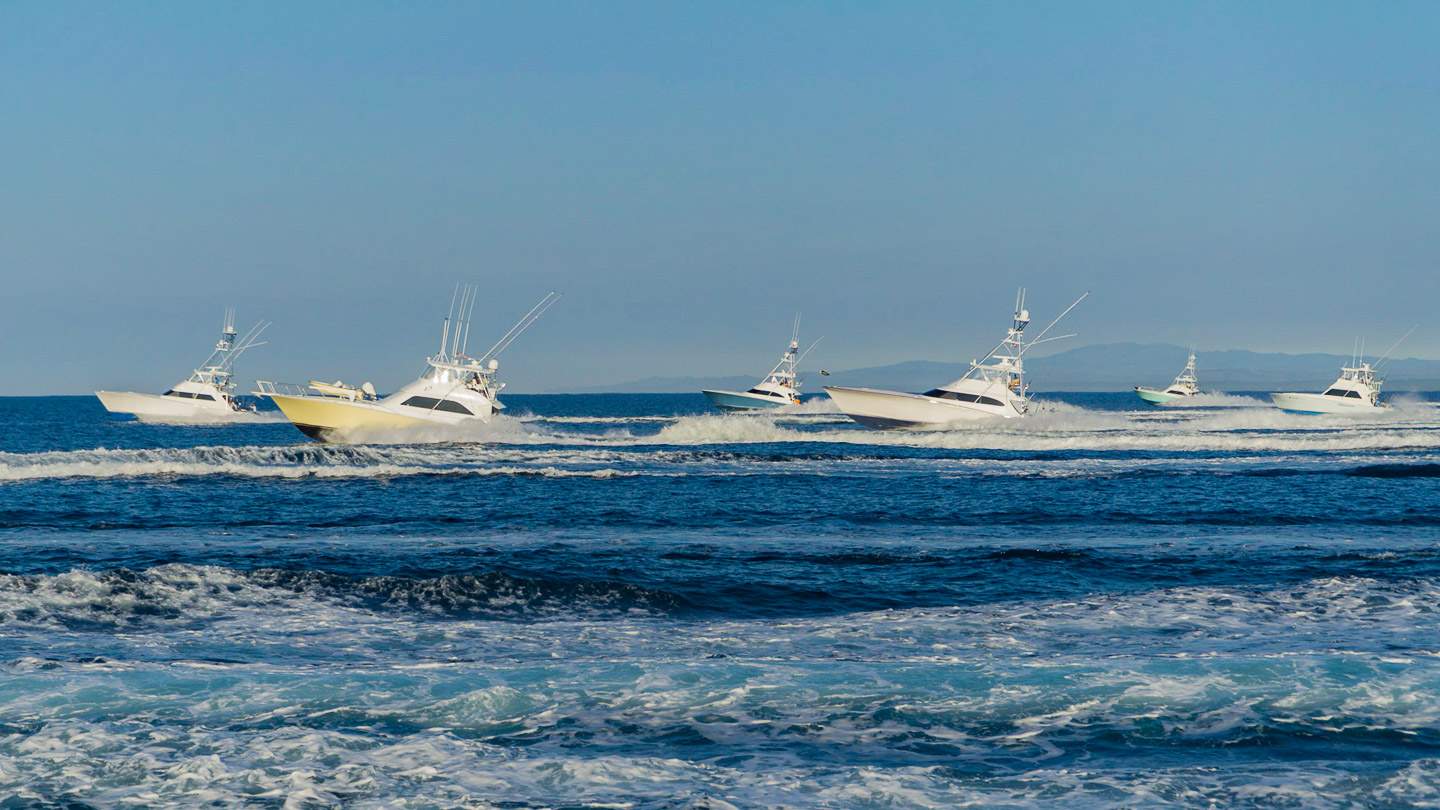 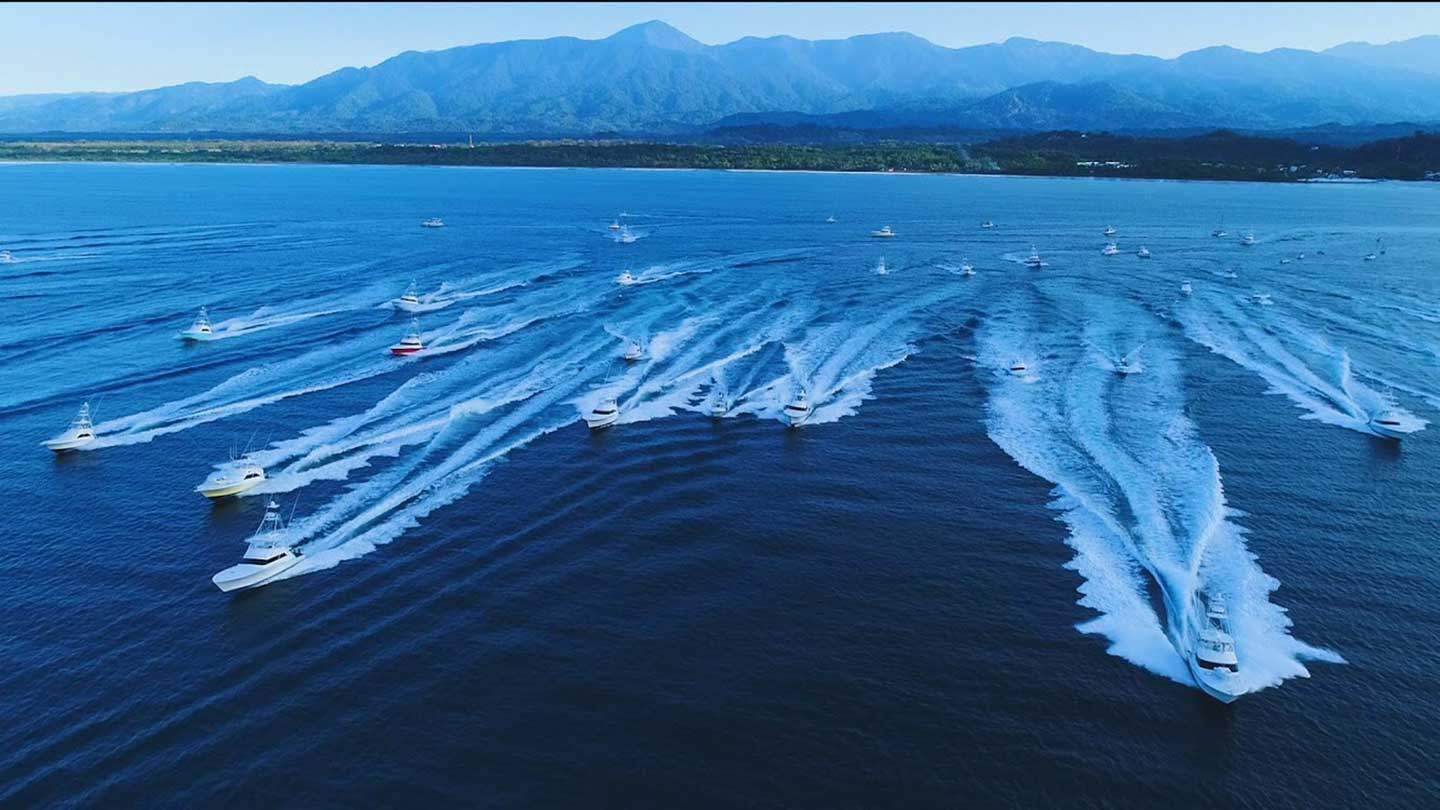 Nestled at the foot of where rich rainforests and the rugged Pacific coast meet, host Marina Pez Vela is a must-visit sport fishing venue in Costa Rica. Dividing the town of Quepos and Manuel Antonio National Park, Marina Pez Vela is an angler’s paradise offering over 200 wet slips, 8 restaurants/bars, luxury condos, a charter and tour center, and full-service yacht-yard with a 200-ton Marine Travelift.

A true gem of the Pacific: Marina Pez Vela 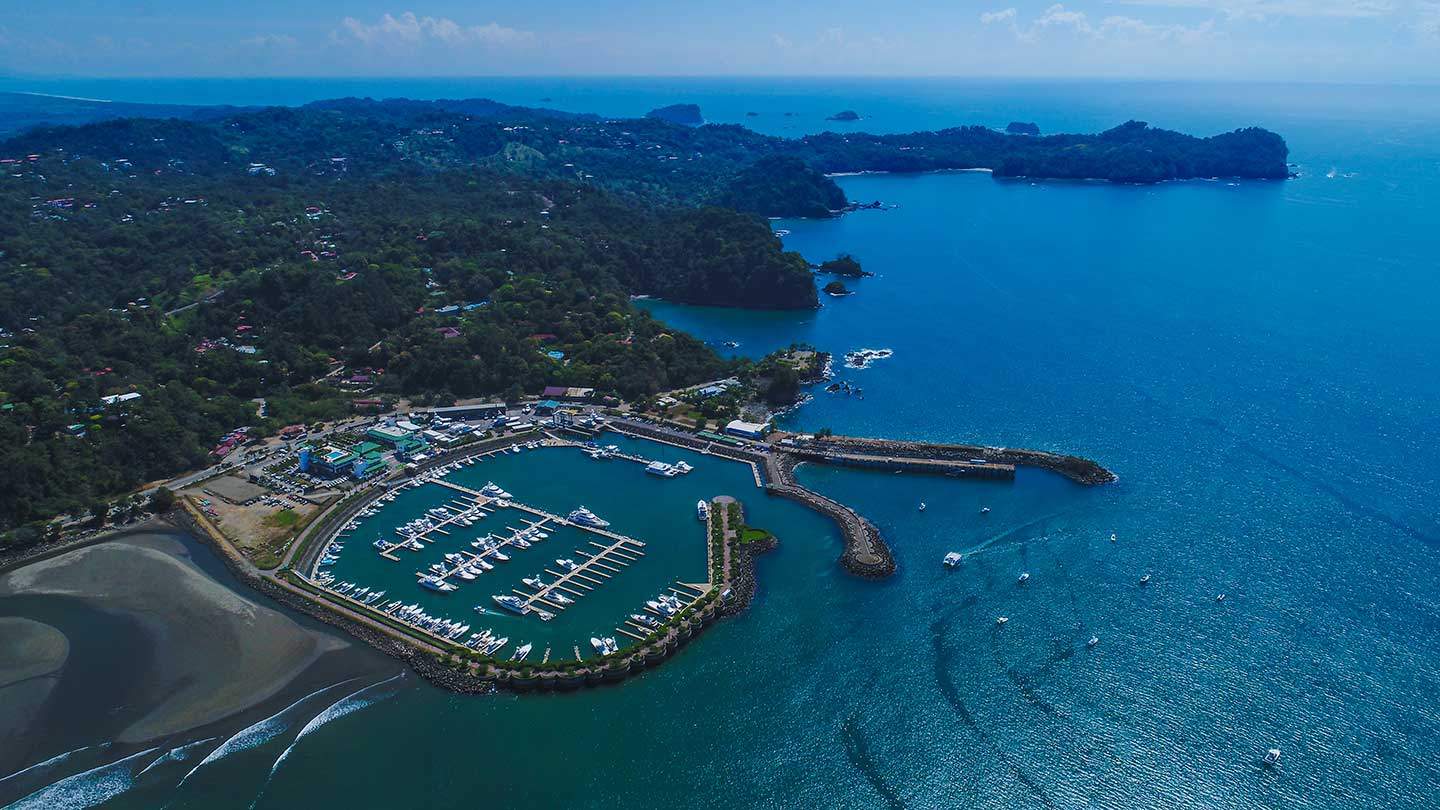 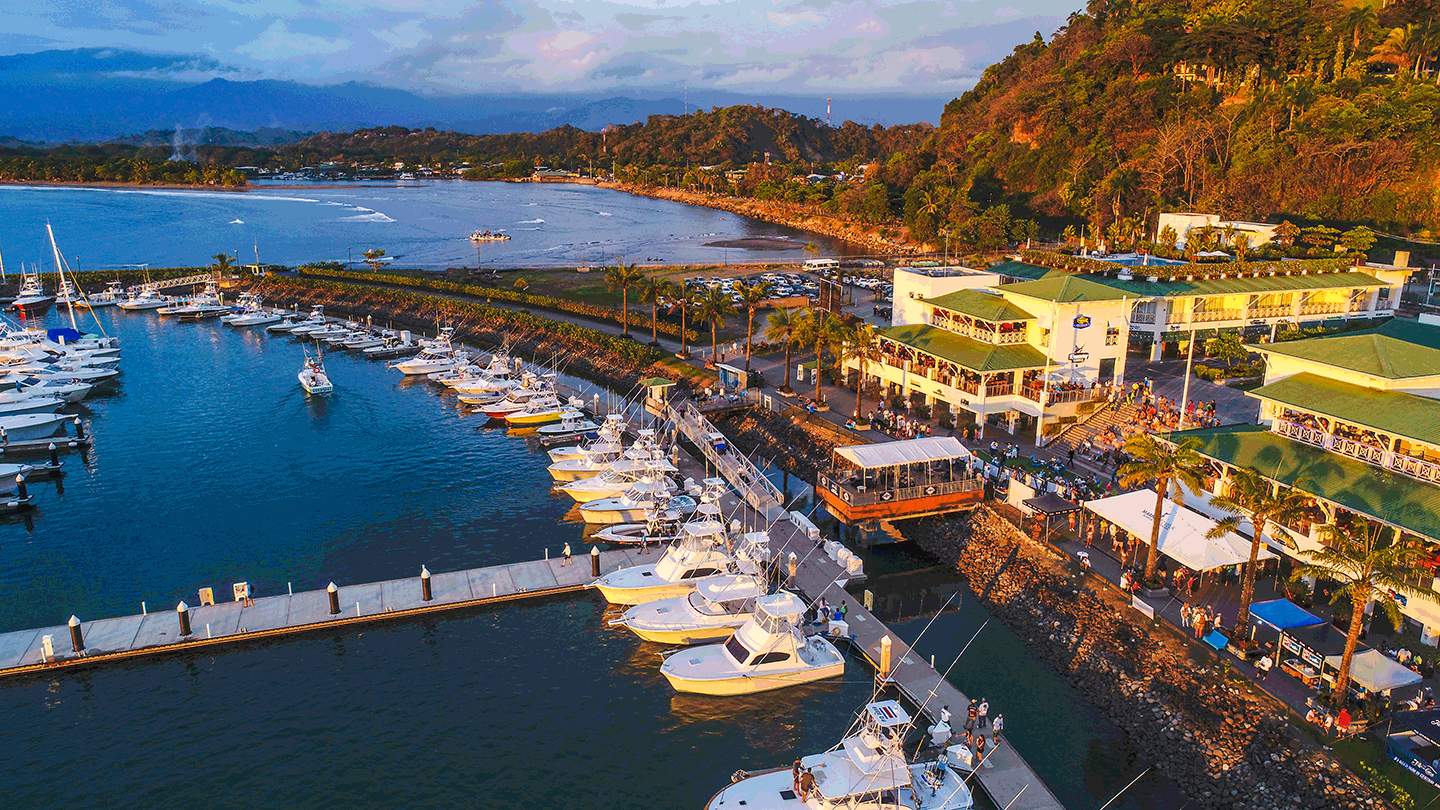 This tournament hosted both a large (35’ and over) and small (34’ and under) boat category, with general divisions of: Billfish Release, Tuna, and Dorado. $500,000 in cash prizes were presented to teams for their performance in releasing the most aggregate billfish points (sailfish, blue marlin, black marlin, striped marlin) and/or weighing the heaviest two-fish total of each gamefish species (tuna & dorado) during the two-day tournament. 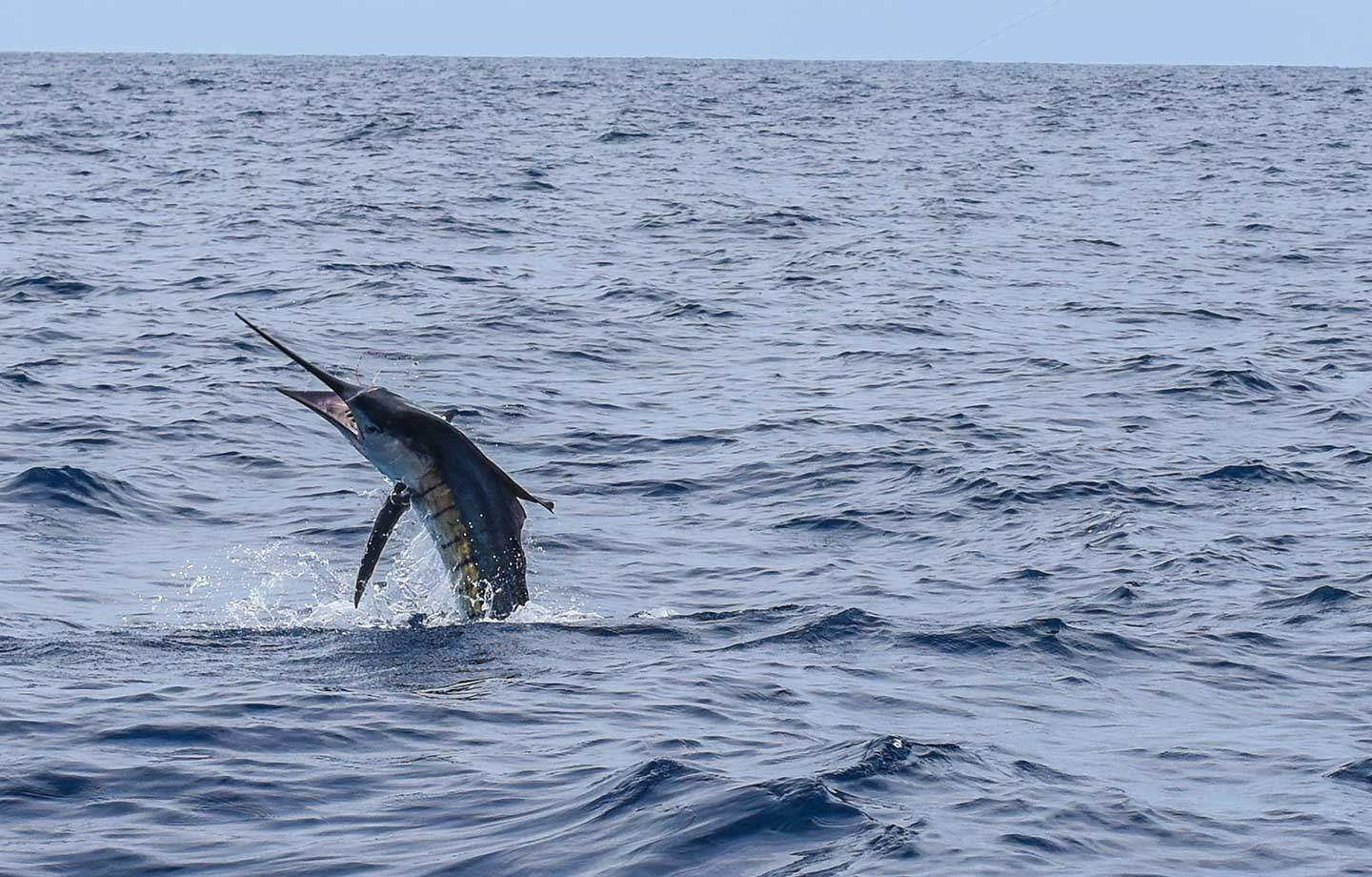 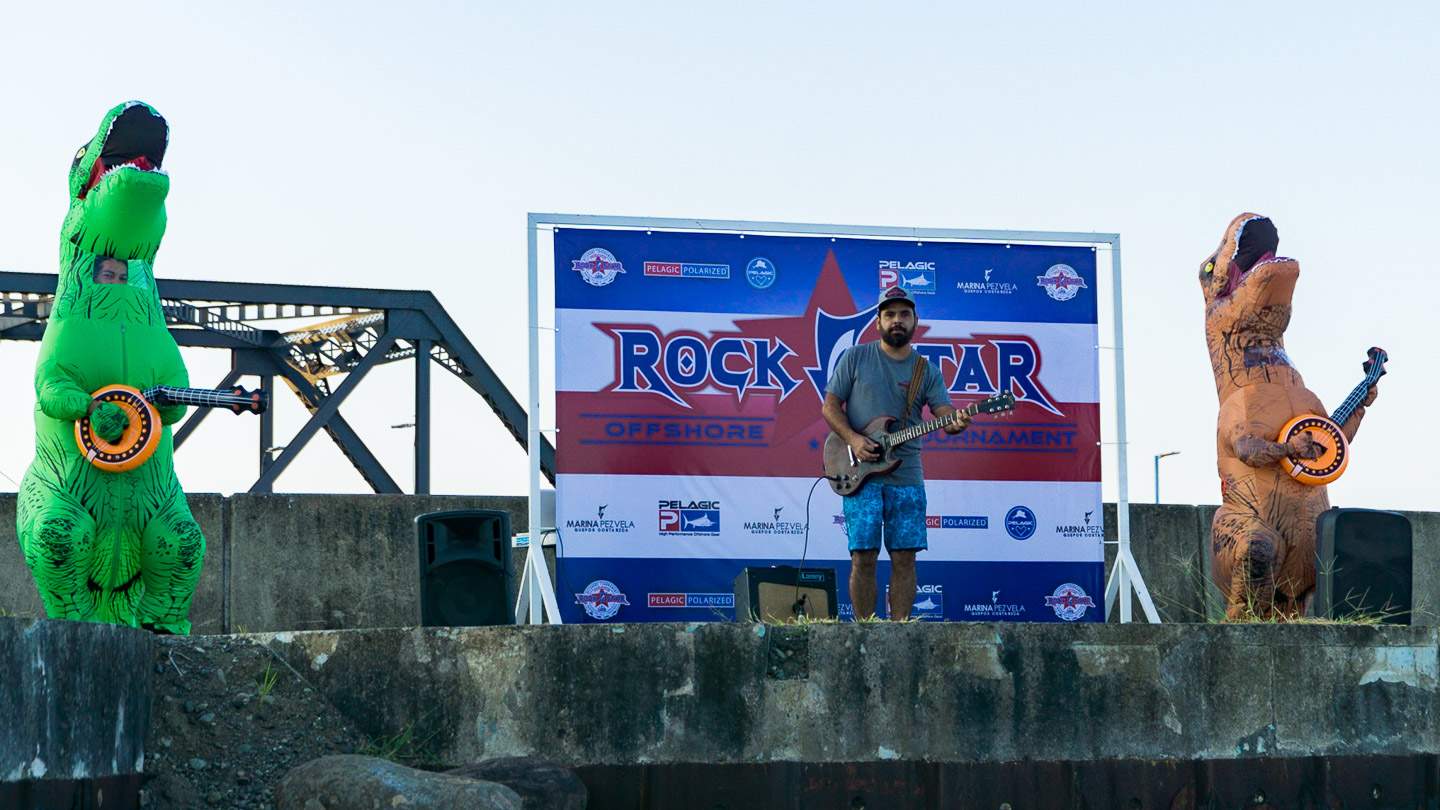 The 2019 event rocked Costa Rica beginning on January 11th as 52-teams with 261-anglers finalized their registration and jackpot bets to a live rock concert playing live on the main amphitheater stage. ROCKSTAR Tournament Village was bustling with energy as crowds flocked vendor tents where tournament apparel and merchandise was available; and to PELAGIC’s Flagship Superstore – a unique addition to Marina Pez Vela’s waterfront retail landscape. Here, patrons can shop the largest selection of PELAGIC products found anywhere in Central America. 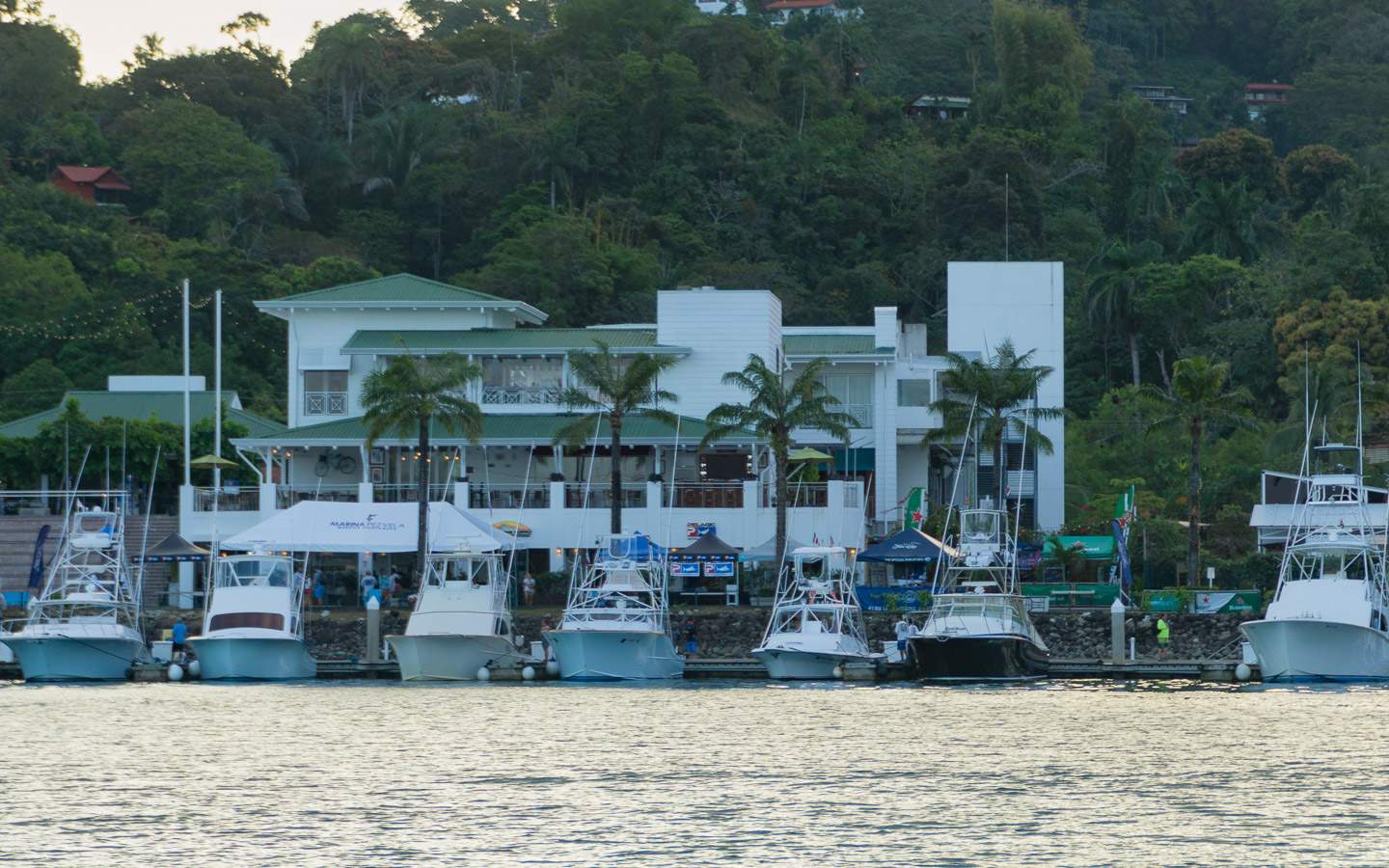 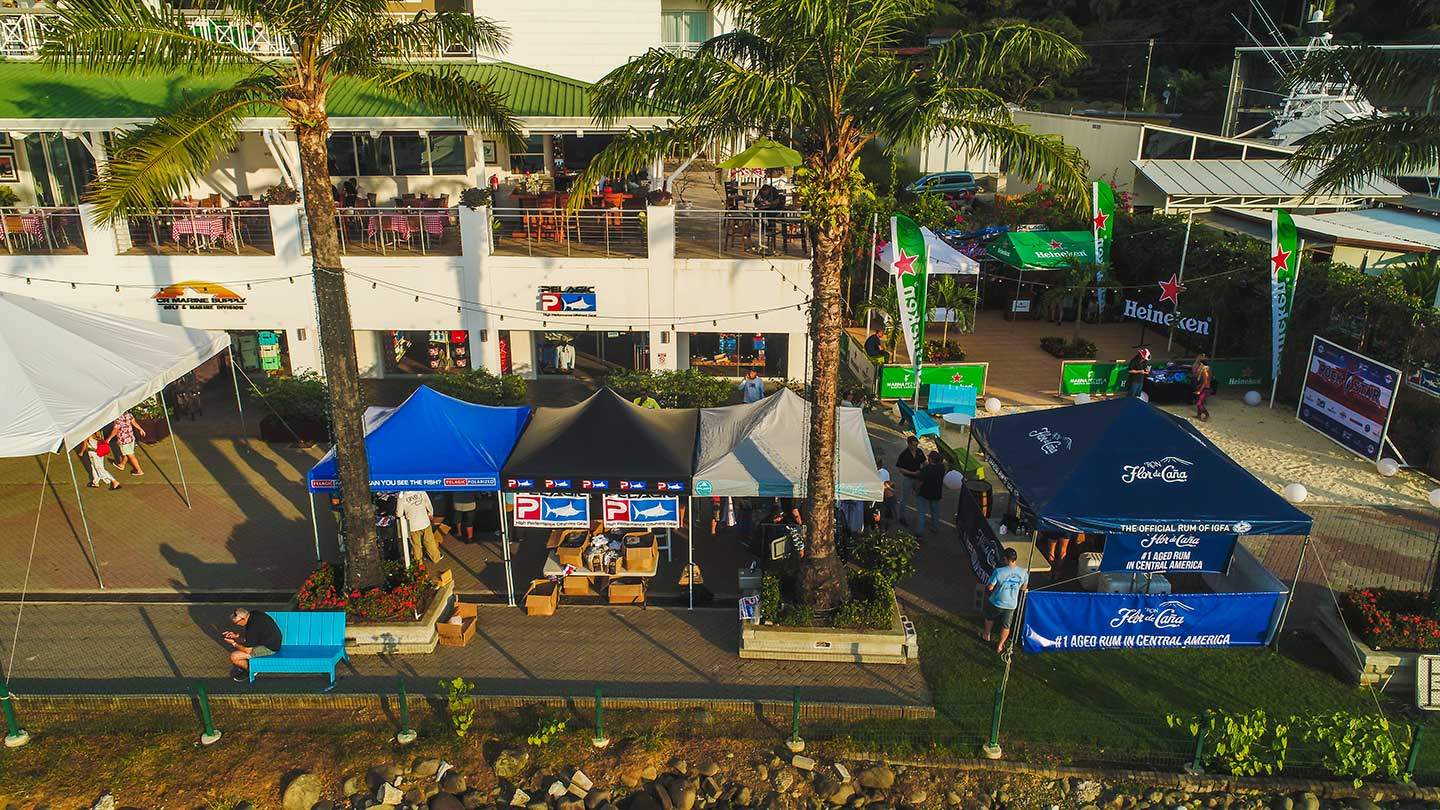 Parallel to the Flagship Store, the PELAGIC “Pura Vida” Beach Club was the hub of all things party. Teams could pose with the PelagicGIRLs with the option of using props from the “Rockstar! Photo Station”; food service was provided by Z Gastro Bar; while our friends and sponsors at both Flor de Caña & Heineken hosted open bars for their respective liquor or beer offerings.

Teams getting in the ROCKSTAR spirit at the photo station 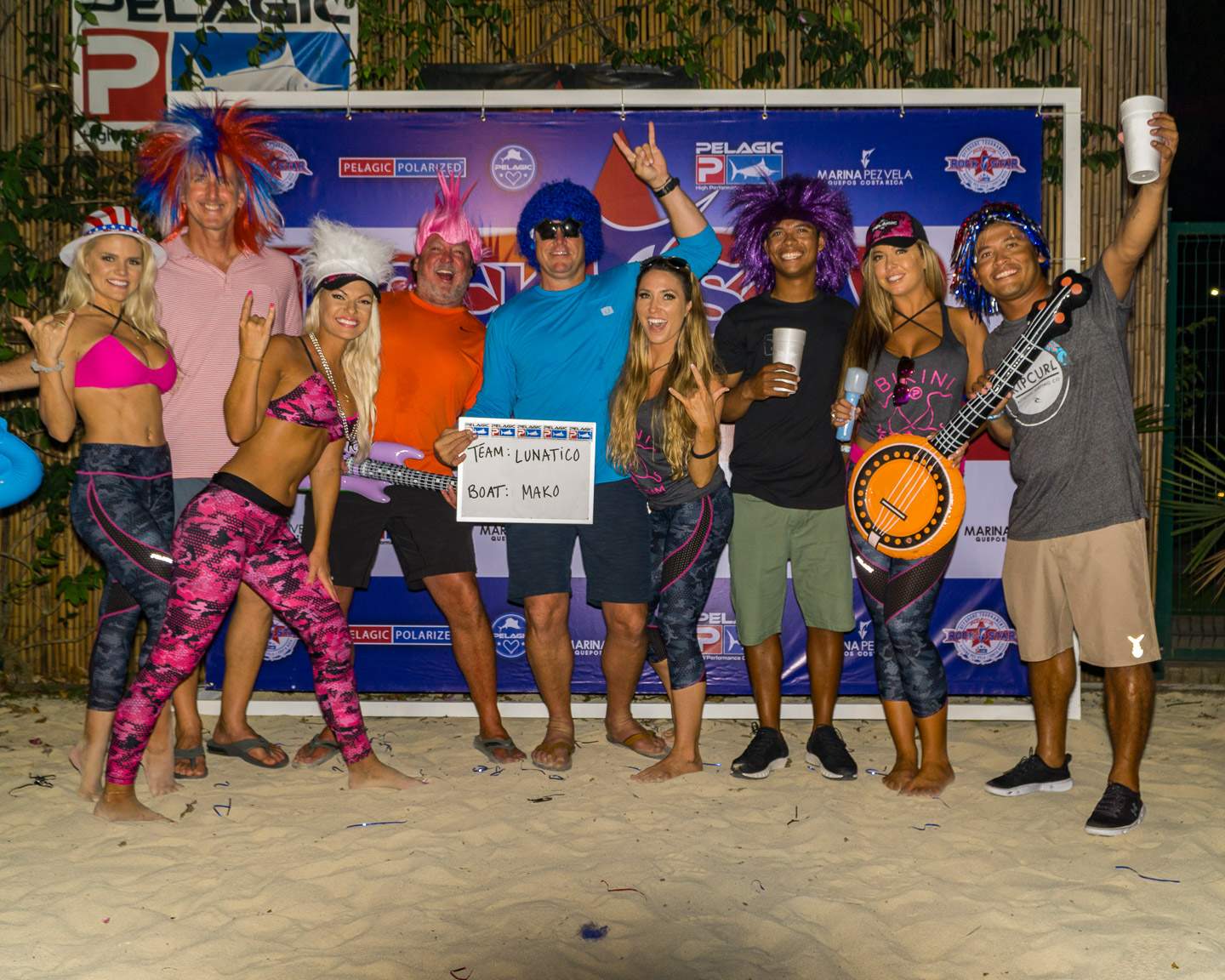 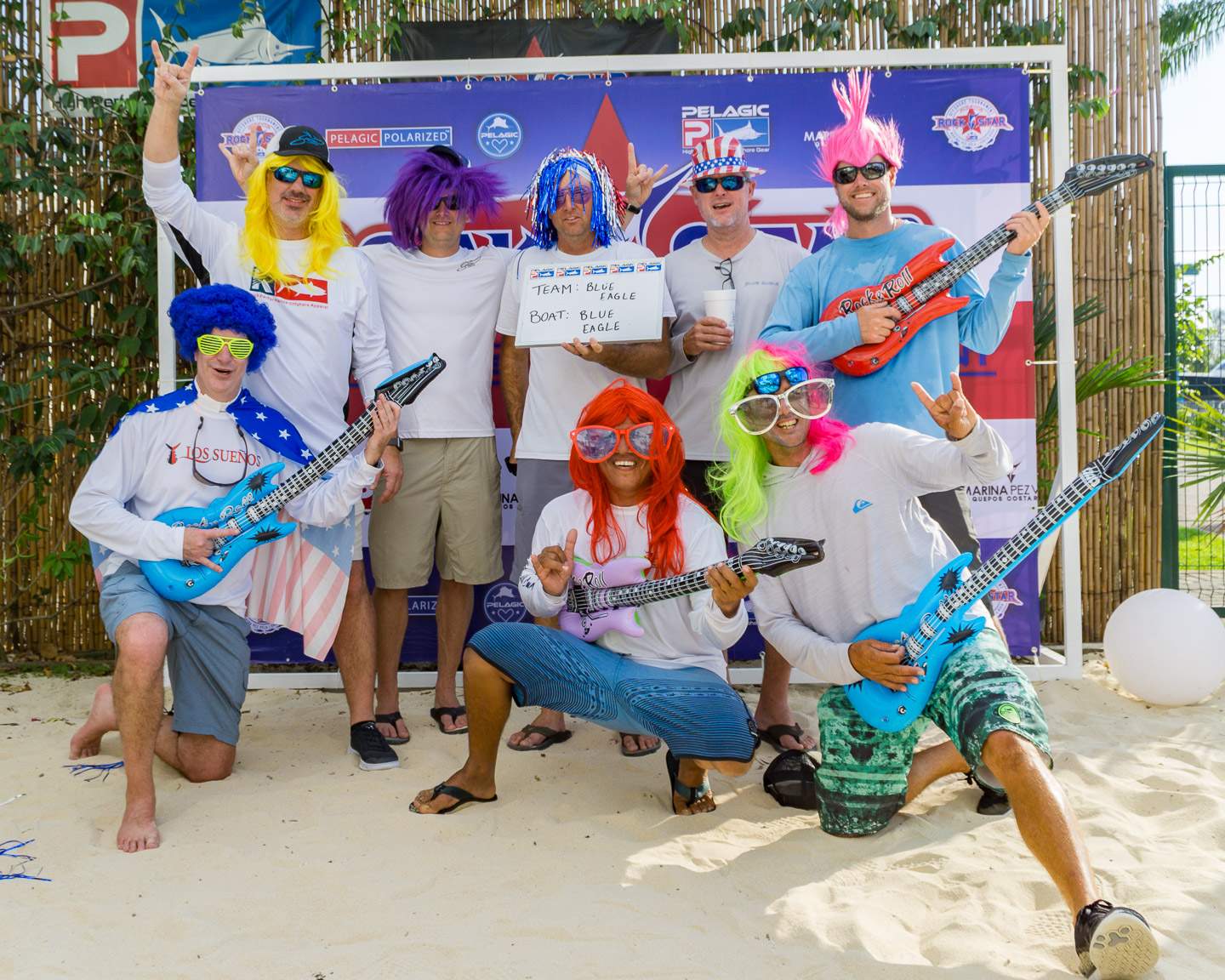 As the night came to an end and the band exited the stage, the evening’s vivacious ambience kicked things off for what would be a thrilling two-day tournament ahead… and with over $500,000 on the line, excitement was at an all-time high…

Sailfish on the line! 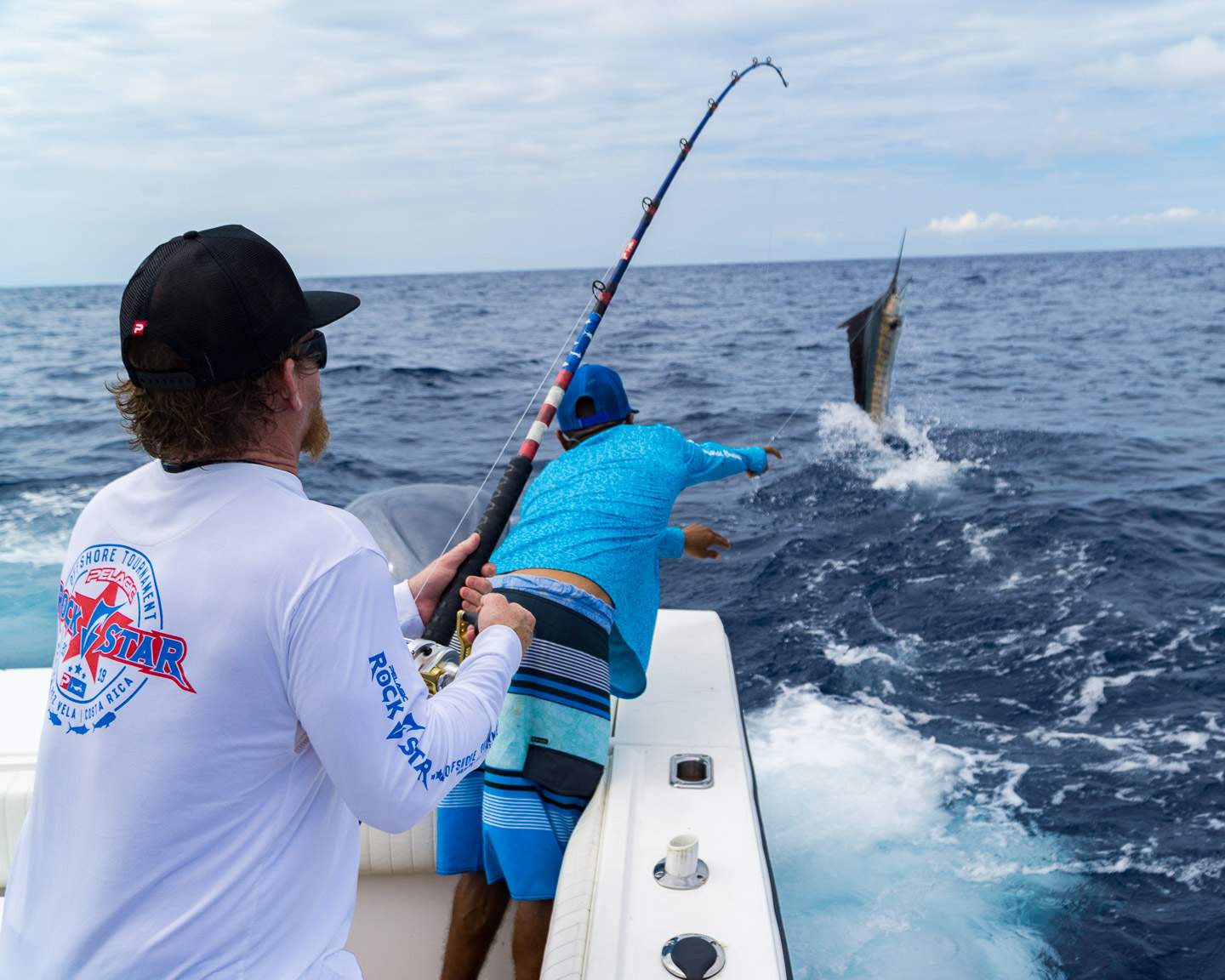 The 52-team tournament fleet experienced incredible fishing on day-one of the tournament, with a total of 209 marlin and sailfish released, and a busy weigh station hoisting a steady stream of quality dorado and yellowfin tuna. In the Billfish Division, Team NSATIA BILL cleaned up shop by accruing 1100-points for 11 Pacific Sailfish releases which was good enough to sweep the daily billfish jackpots. Combined with their 3rd Place performance in the Dorado Division, NSATIA BILL took home a check for $93,600.

Team NSATIA BILL cashed in big after their day 1 performance 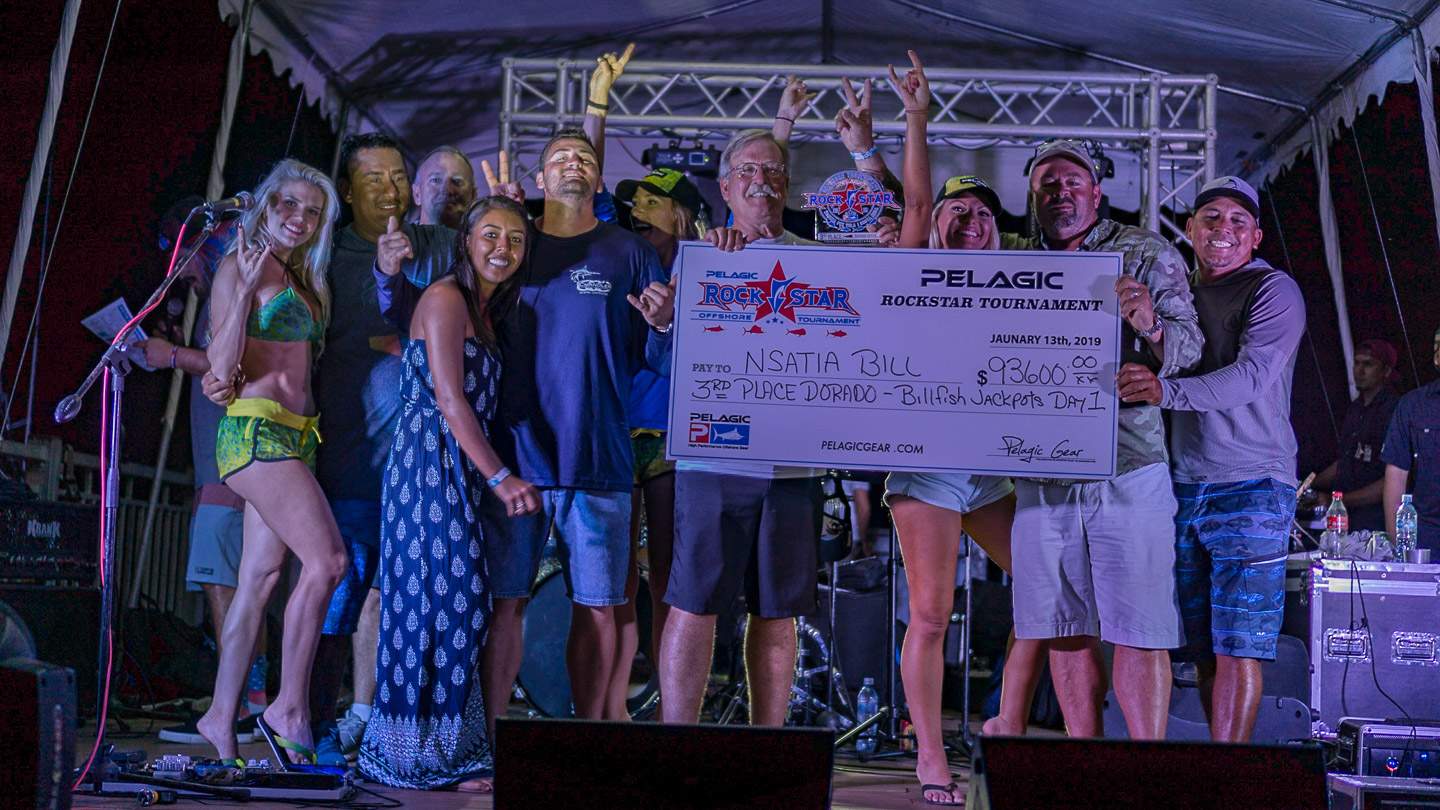 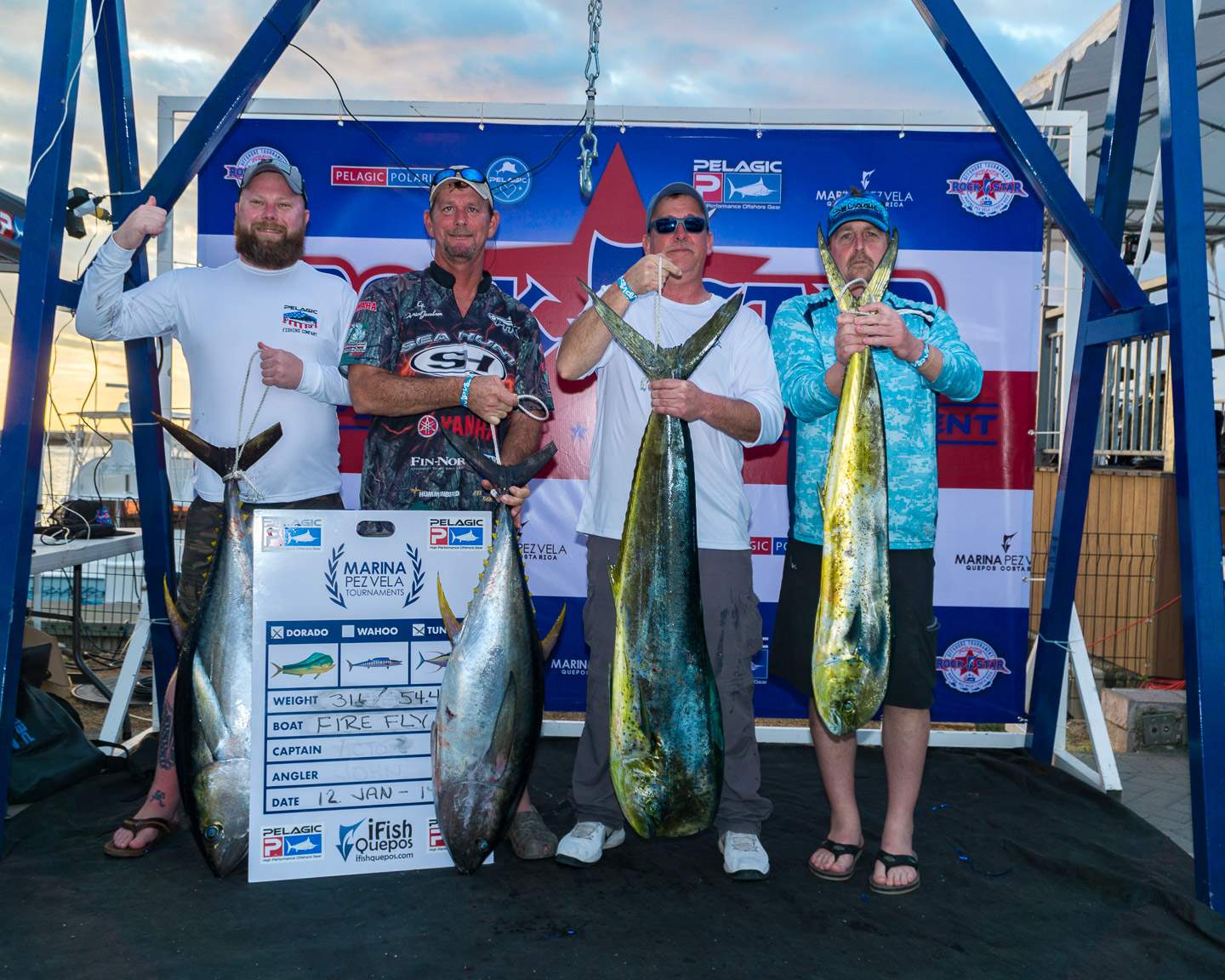 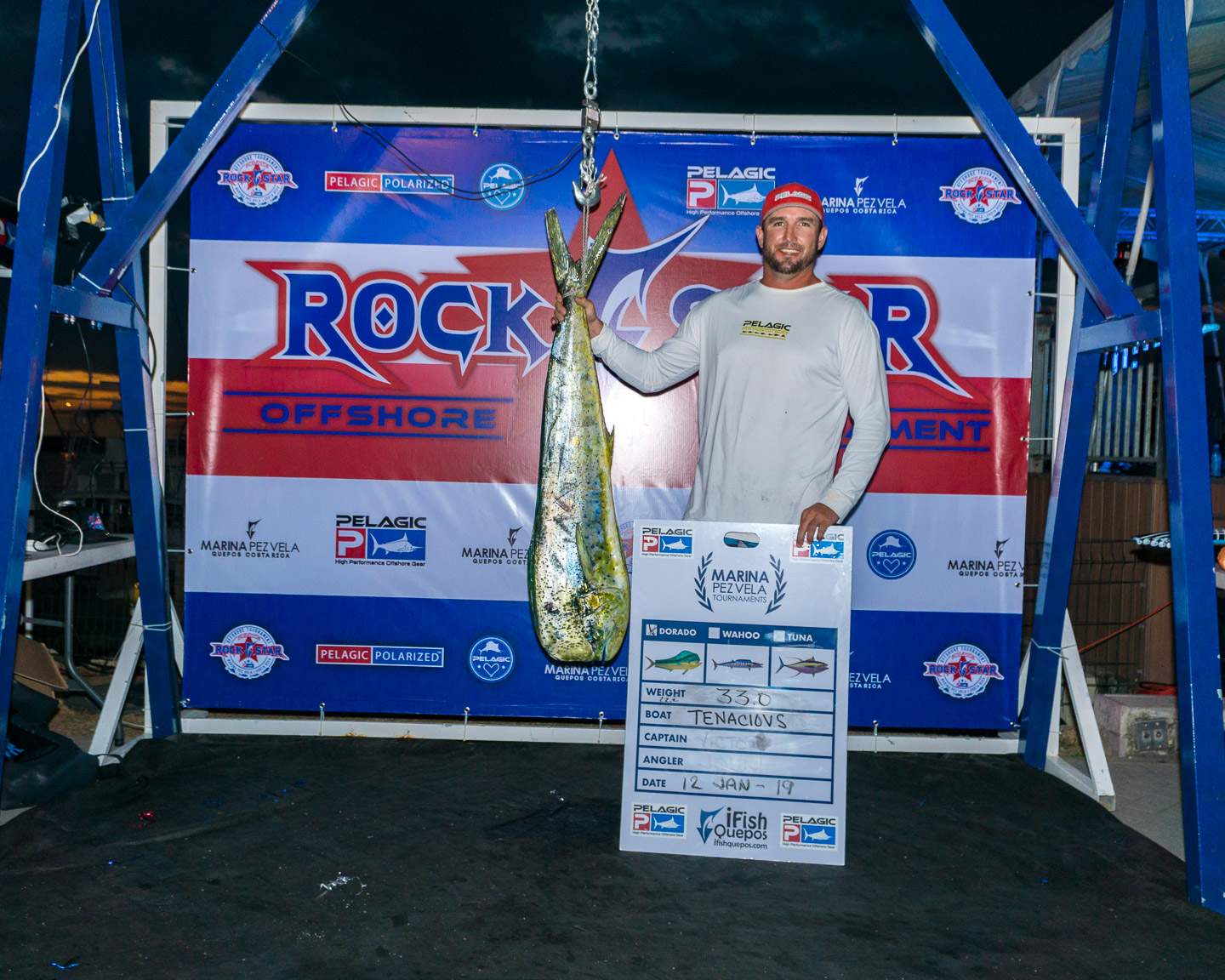 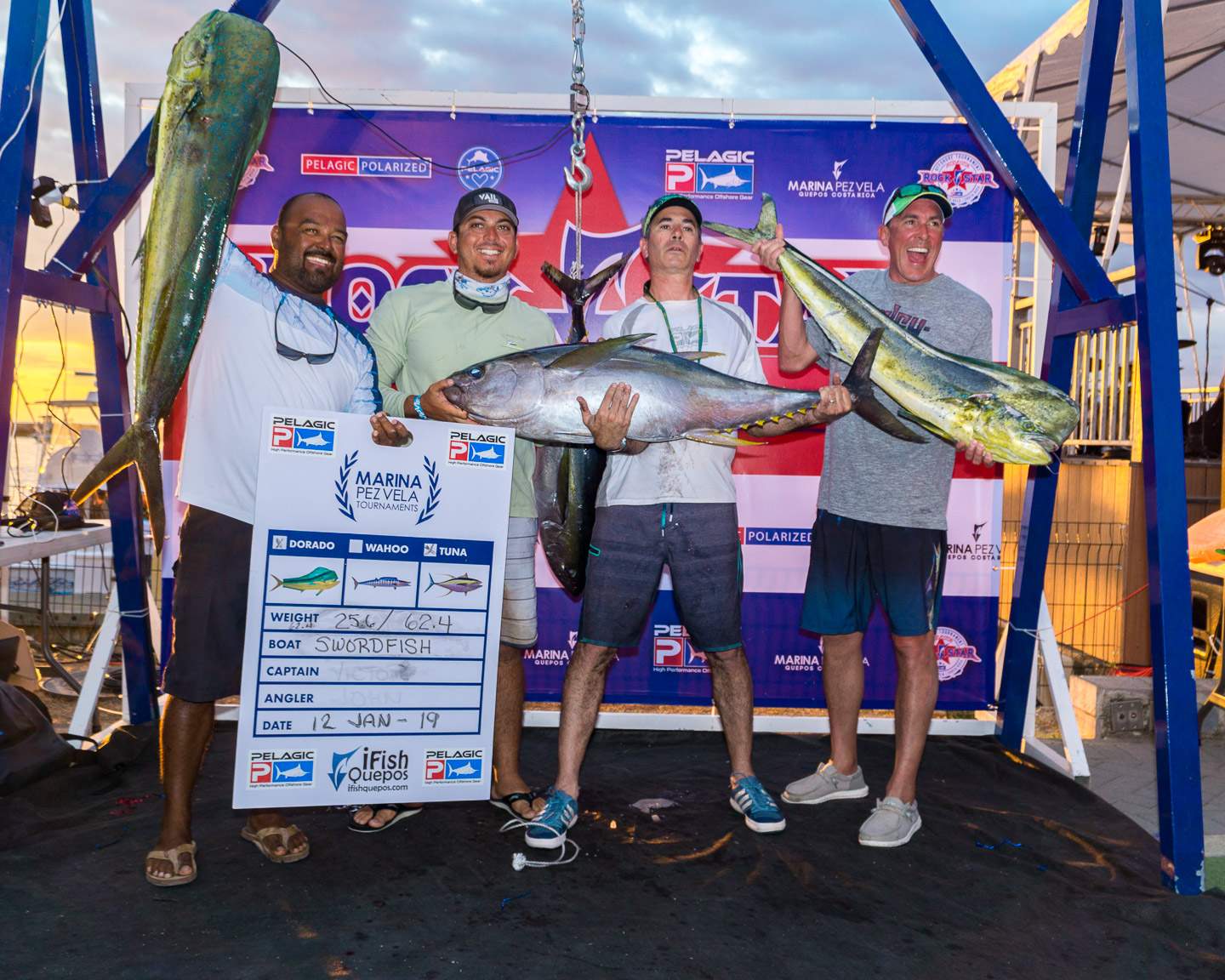 Fishing continued to fire on day-two of the tournament as 216 combined billfish were released and the dorado bite was on fire. Team BIG OH stole the show with 16 sailfish releases, earning them 1600-points and sweeping all levels of daily billfish jackpots. MISS BEHAVIN’ scored the largest tuna of the day (60.8-lbs) to take the tuna daily jackpot, while TAG TEAM took home the dorado daily with a solid 44.2-lb. fish. 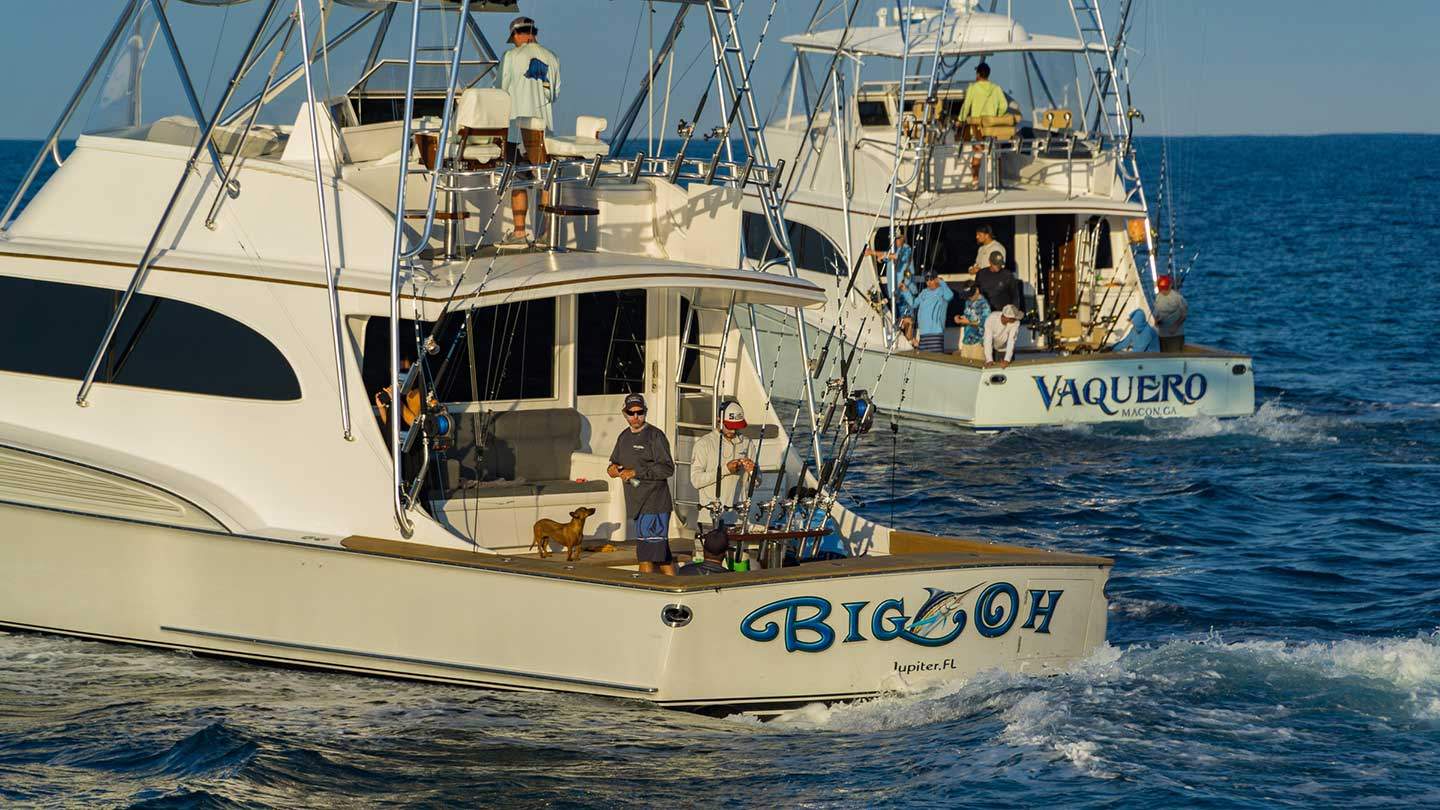 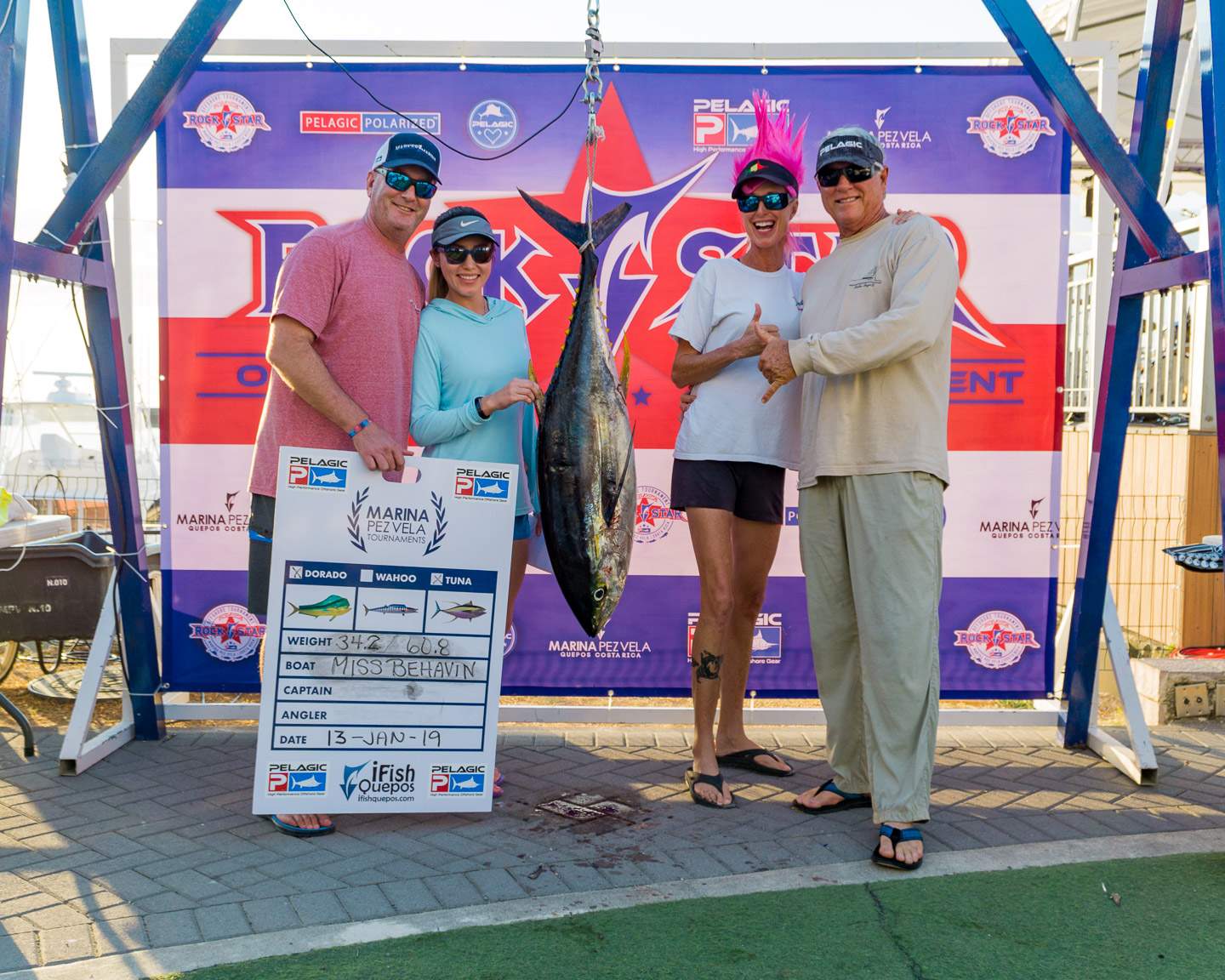 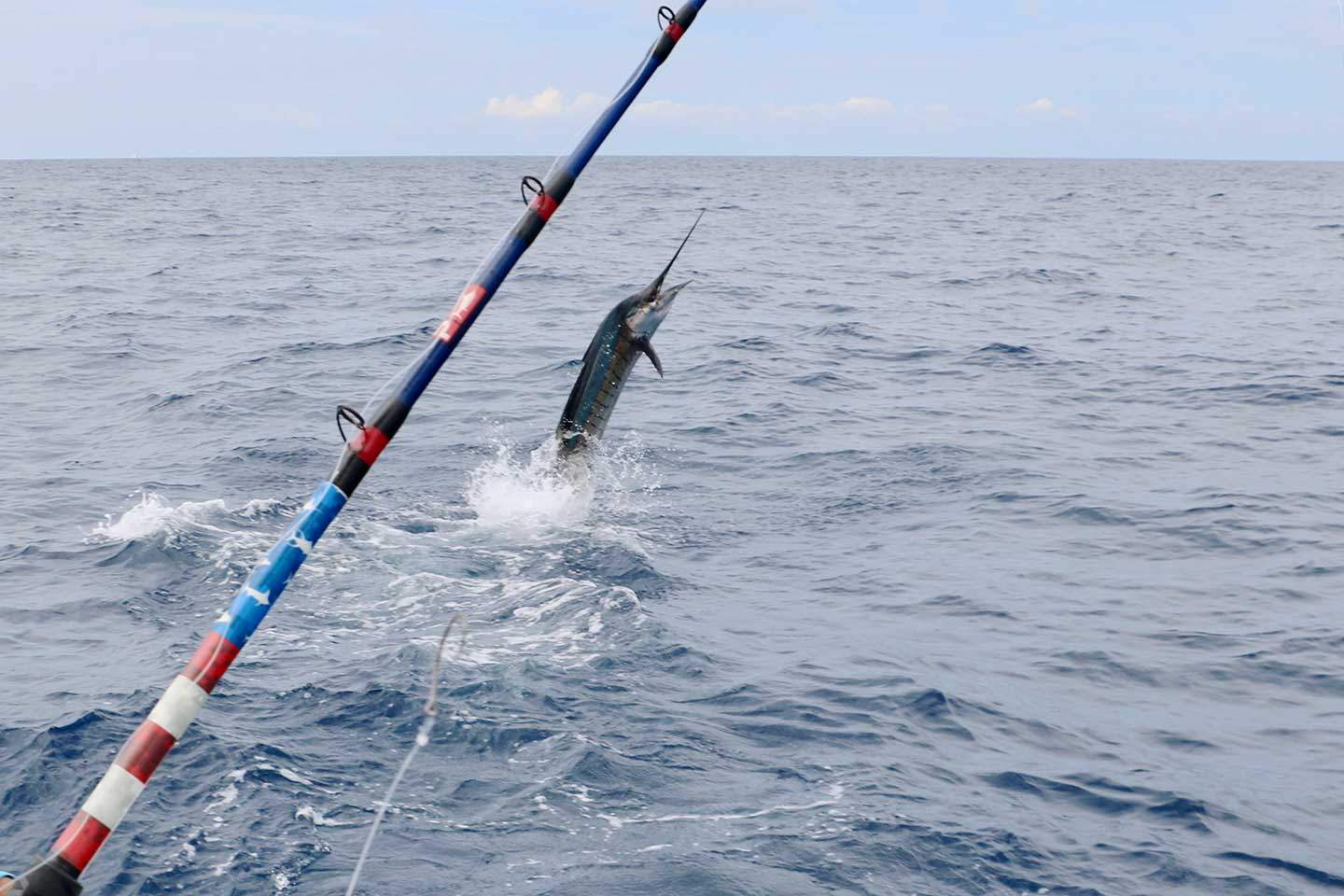 In the Small Boat Category, KELLY DAWN weighed-in the tournament’s largest dorado – a stud 49.0-lb. bull dorado – to earn their division’s Dorado victory and the day-two jackpot, good for $4,600. 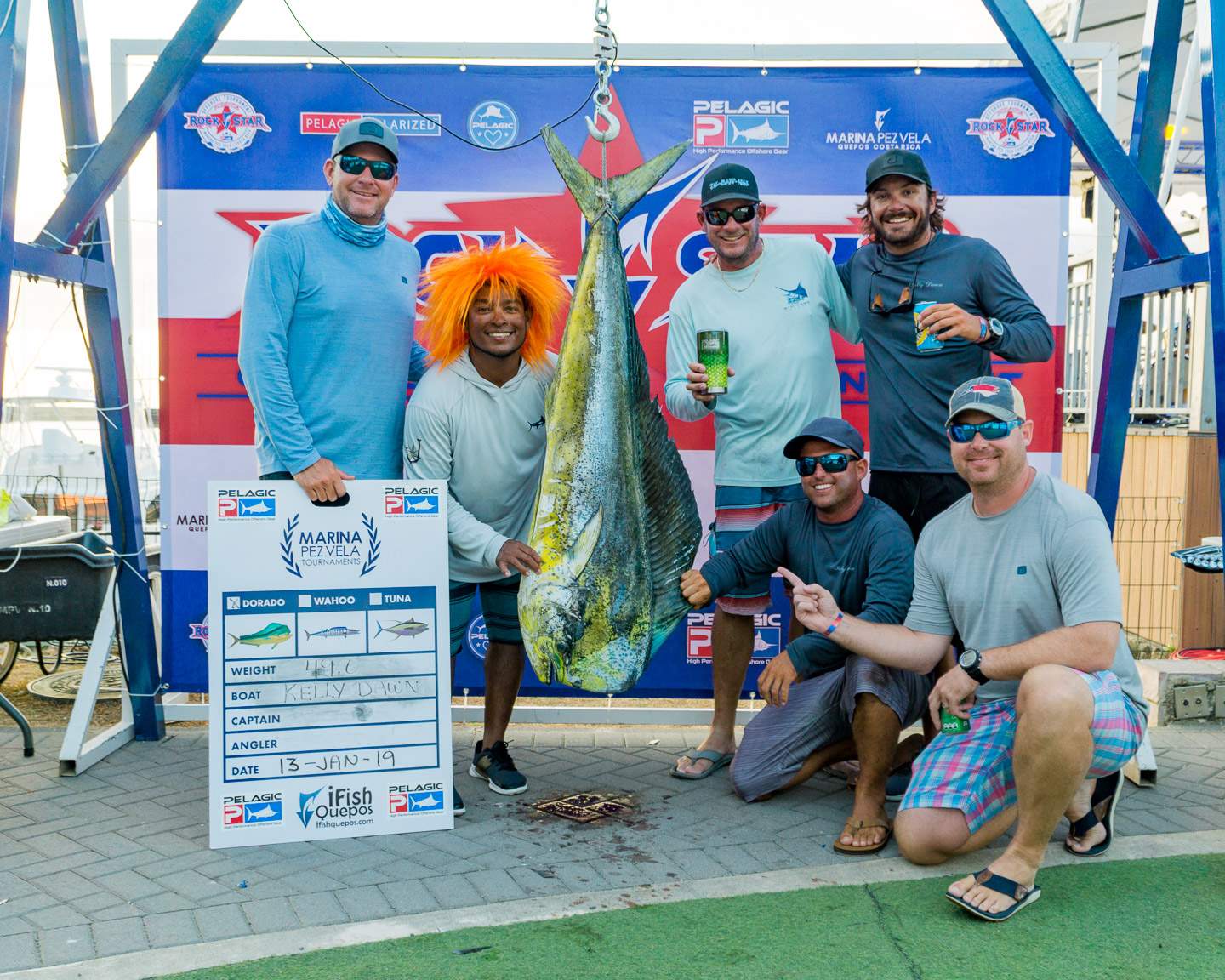 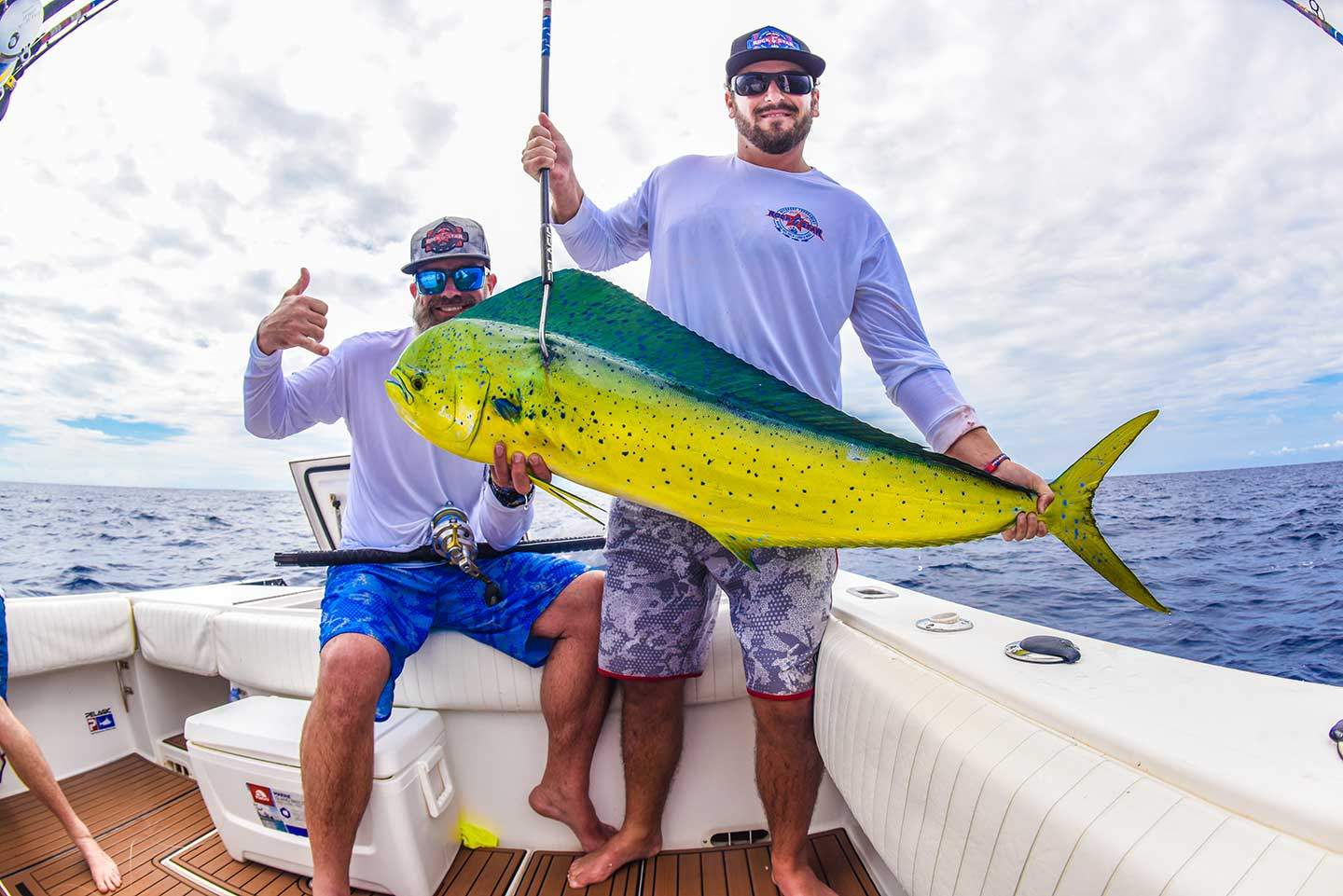 Upon the tournament’s conclusion, the marina was amplified by the sounds of The Kin Rivera Band as teams and onlookers alike were anxious to hear the final results. Z-Gastro Bar, Flor de Caña, & Heineken once again provided a great party atmosphere in the PELAGIC “Pura Vida” Beach Club, while a giant inflatable TV screen was erected just before the awards ceremony as the entire crowd was treated to an incredible Rockstar! Tournament recap video. 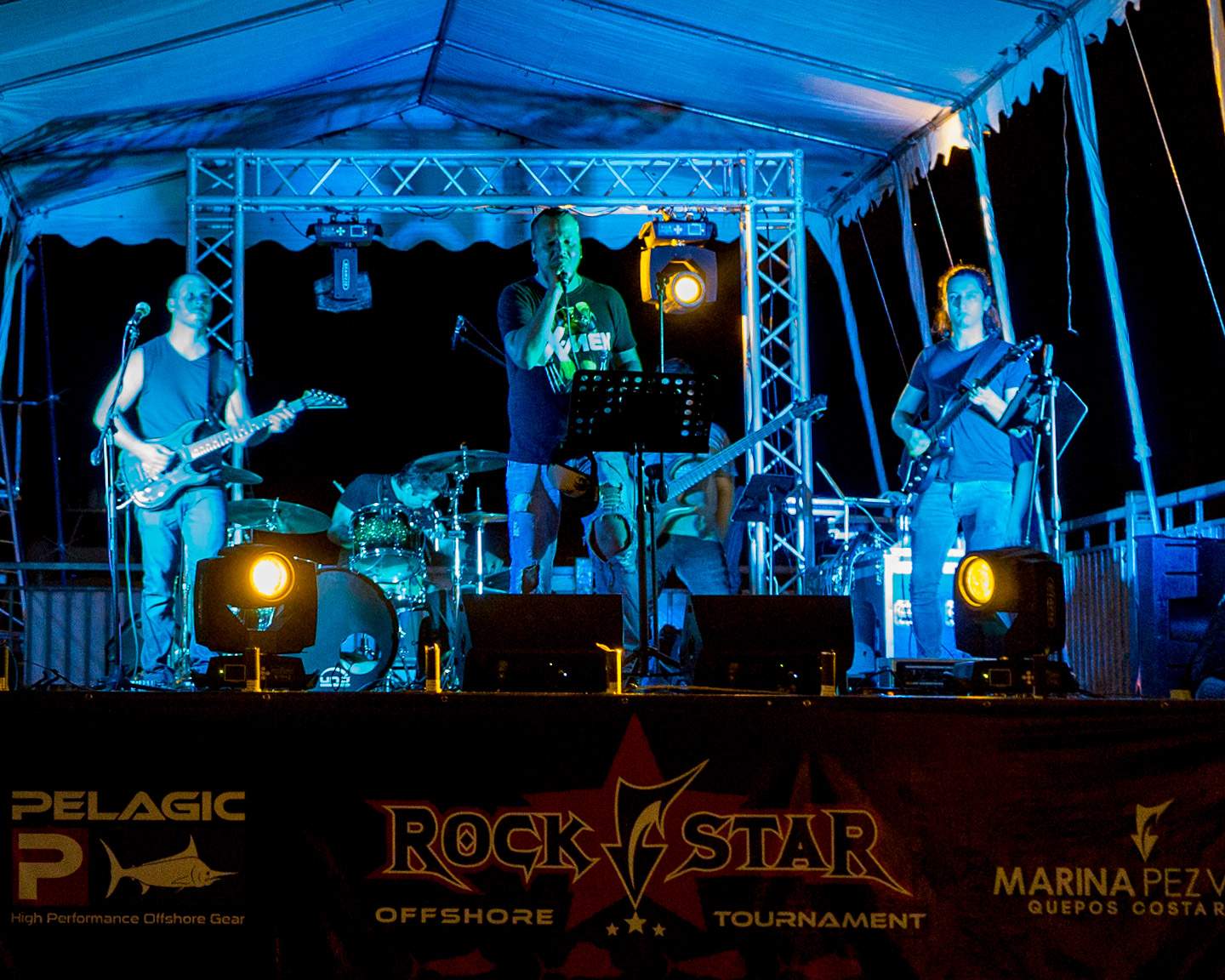 Tournament Director, Colin Sarfeh, and the beautiful PelagicGIRLs soon took the main stage, welcomed by an explosive pyrotechnic display as a large crowd roared with excitement. Awards were announced, and ceremonial checks & trophies were presented to each winning team.

And the results are in…

When all was said and done, the 2019 ROCKSTAR Offshore Tournament crown went to Team BIG OH. A high-scoring second day - spearheaded by the tournament’s Top Overall Angler, Gray Ingram - catapulted the team to the top of the leaderboard as they tallied a total of 26 sailfish releases for the two-day tournament and a score of 2600 points to earn 1st Place Billfish Division honors. In conjunction with sweeping all levels of the day two billfish jackpot, BIG OH won an impressive $122,400! 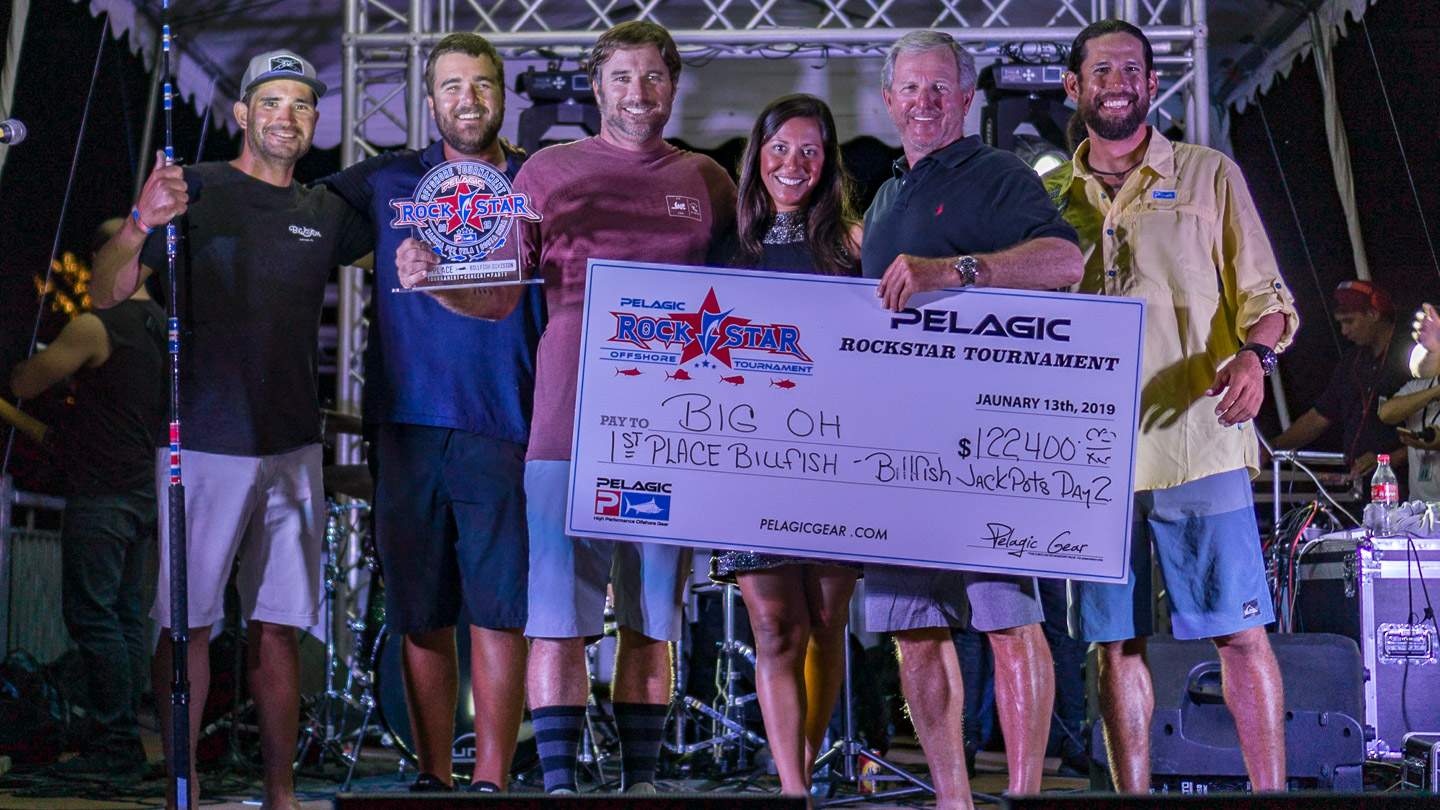 TAG TEAM weighed a 44.2-lb. dorado on the second day to take the daily jackpot. Combining that fish with their day one dorado of 22.0-lbs. gave them a 2-day aggregate total of 66.2-lbs. – enough to take 1st Place in the Dorado Division and a total winnings of $30,800. 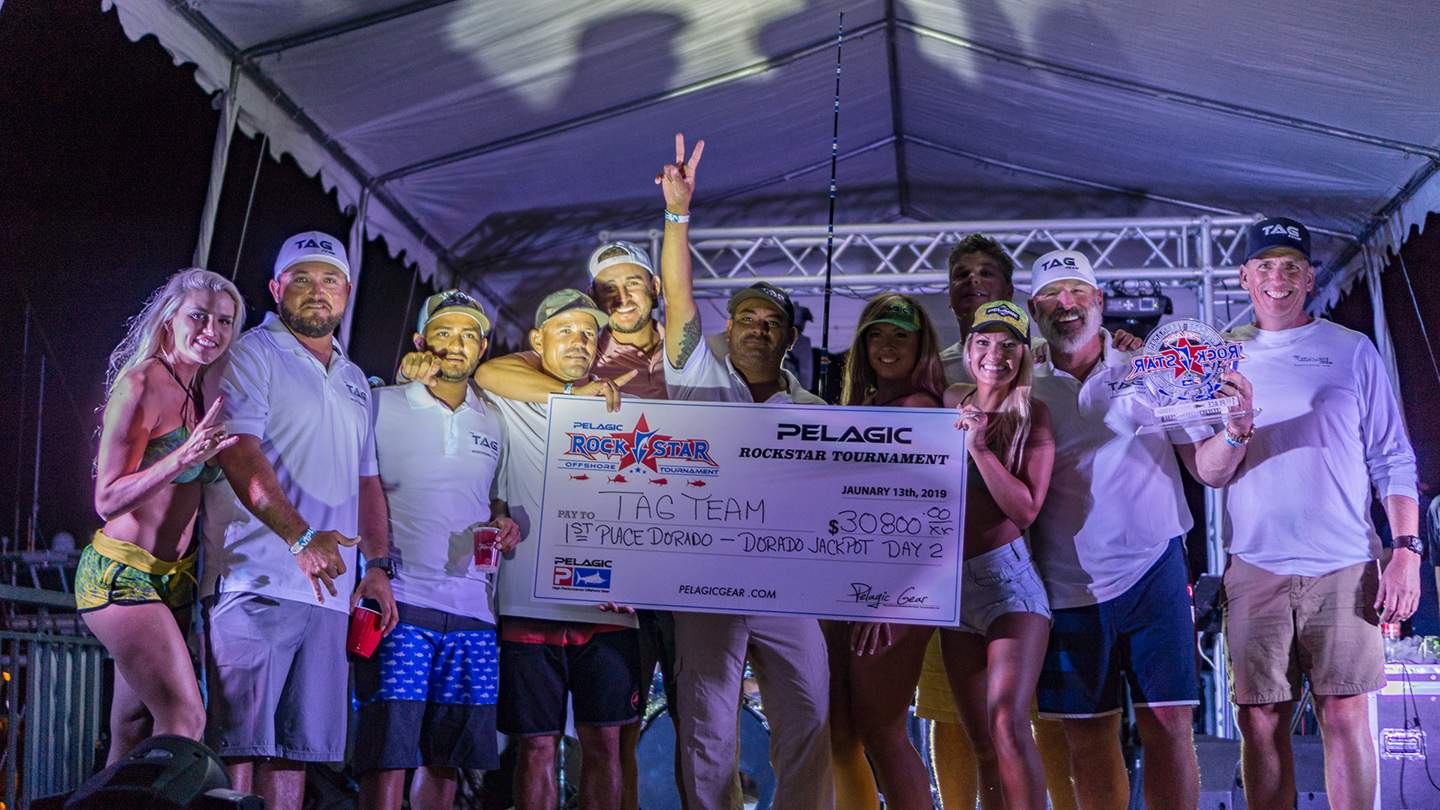 Weighing respective 41.2-lb. and 38.8-lb. yellowfin tunas on days 1 & 2 of the tournament was Team Sea Hawk Paint aboard OPEN FLY. Their combined weight of 80.0-lbs. won them 1st Place Tuna Division and an earnings of $15,600. Team Desert Plastering aboard AMY’S DREAM was the top overall team in the Small Boat Category. They took home the 1st Place trophy in the Small Boat Billfish Division, as well as both daily billfish jackpots with their combined 9 sailfish releases (9000-pts.) to win $9,600. 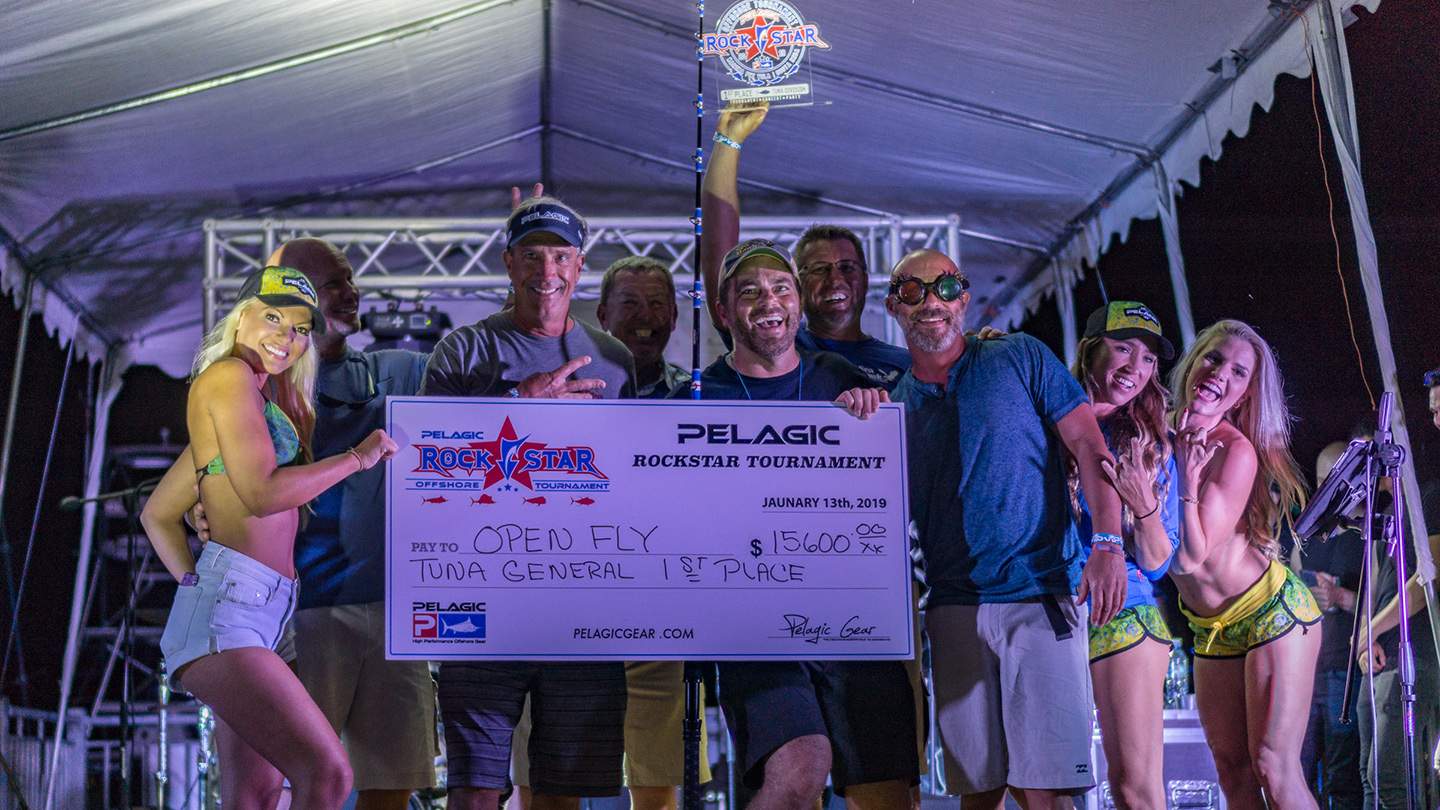 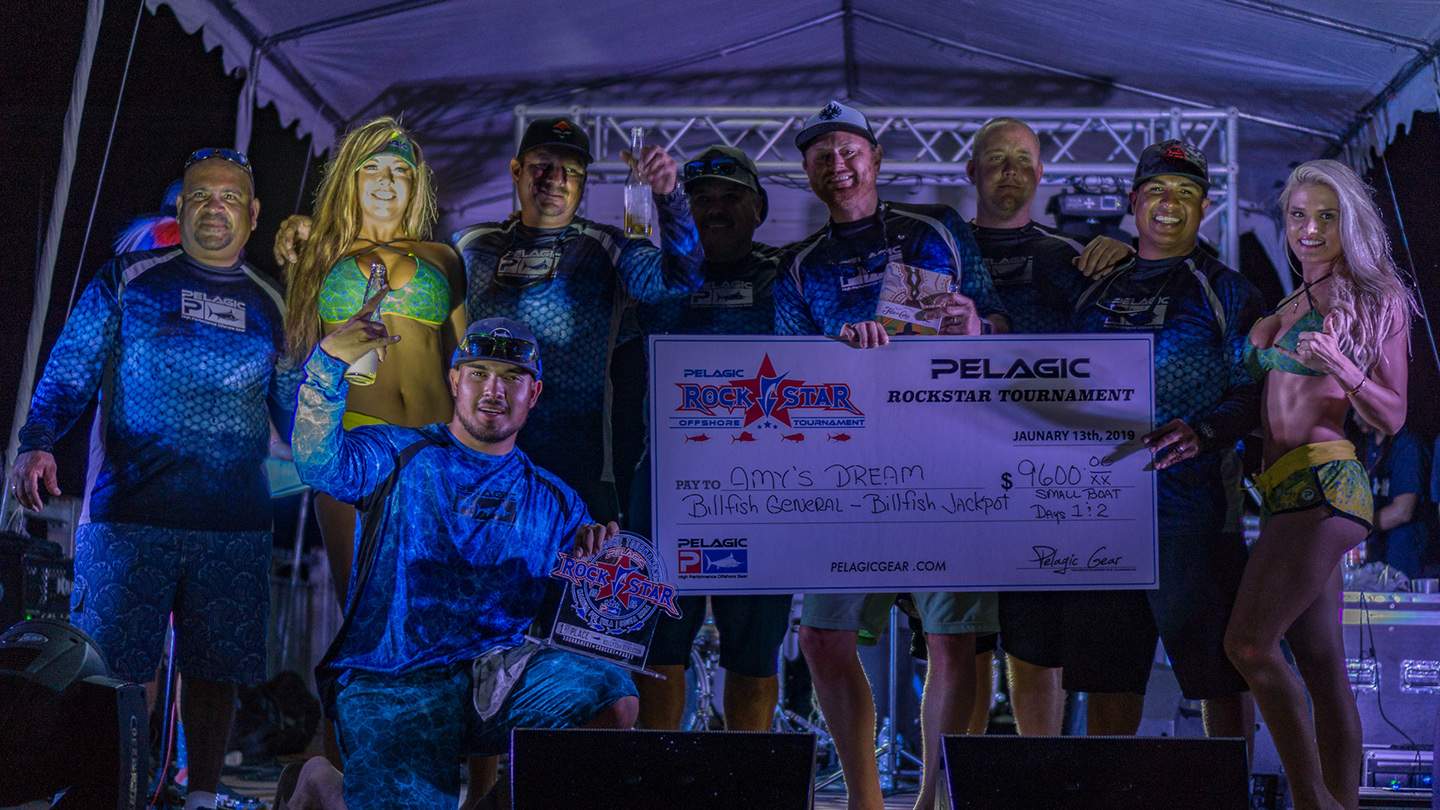 The evening’s celebration continued as Queen's hit single “We are the Champions” resonated through amplifiers and fireworks filled the skies above Marina Pez Vela as thousands of onlookers and tournament participants honored the captain, anglers, and crew of BIG OH on their resounding victory. The partied continued well into the night as Kin Rivera Band once again rocked the stage with an eclectic mix new and old rock hits, while tasty cocktails and beers were provided by Flor de Caña & Heineken.

A fireworks send-off to cap the 2019 Rockstar! Offshore Tournament 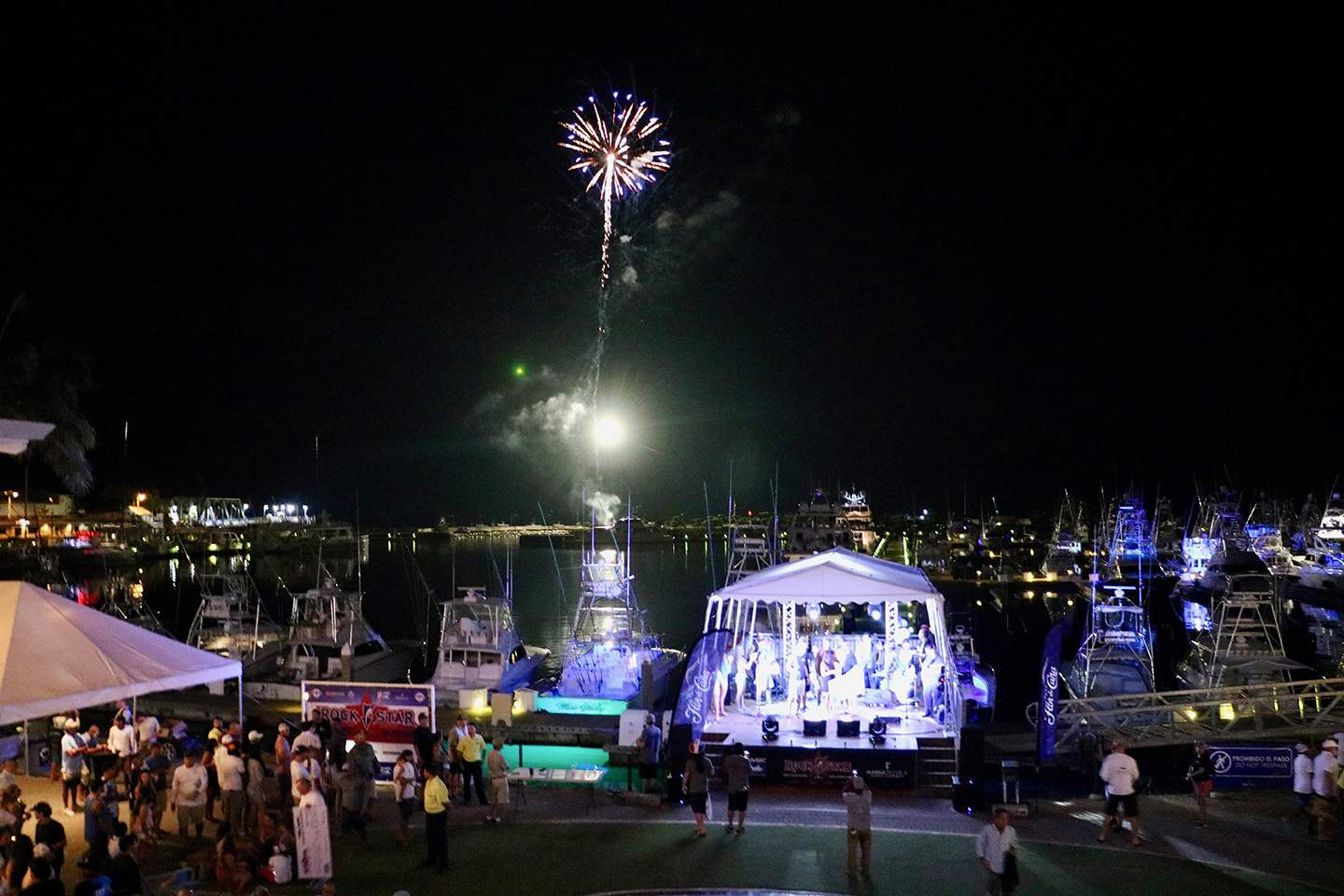 PELAGIC would like to give a sincere THANK YOU to Marina Pez Vela for hosting this incredible event each and every year, as well as our fine sponsors and friends at Seeker Rods, Flor De Caña, Heineken, Z Gastro Bar, Runaway Bar & Grill, Double Hook Bar & Grill, and iFish Quepos for always stepping up to help make this such a fun and successful event.

Thank you to all tournament participants and be sure mark your calendars as the 4th Annual Pelagic ROCKSTAR Offshore Tournament is set to return to Marina Pez Vela next January 10-12, 2020 !