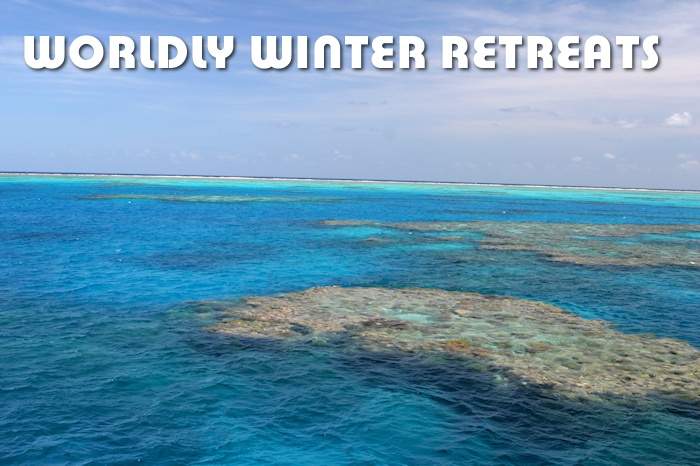 North America has some of the greatest saltwater action this planet has to offer. However, when winter approaches things quickly change. Many species move out seeking warmer waters while some other species do migrate in. One of the greatest challenges we have is with the unpredictable and yet occasionally harsh winter weather. Lucky for you, the Waterman's Journal is happy to offer some smoking hot suggestions to warm up your season. There are some incredible locations that rank very highly in the desire category for sportsfishermen this time of year. Lets take a look at a few of these pristine locals...

Costa Rica is known the world over for its killer surfing and a tremendous Sailfish fishery. Lying just north of the equator in Central America , it is a very tropical location. The terrian varies but is generally mountainous along the coast. Think of Costa Rica as a present day Jurassic Park. Costa Rica is home to a rich variety of plants and animals . While the country has only about 0.1% of the world's landmass, it contains 5% of the world's biodiversity. Around 25% of the country's land area is in protected national parks and protected areas, the largest percentage of protected areas in the world.

Costa Rica's fishery has attracted anglers for decades. Many have the opportunity to flock to the Zancudo Lodge, where over 70 I.G.F.A. records have been set. It is also Costa Rica's premier fishing resort - world renowned for both its inshore and offshore fishing. Recently voted as the #1 fishing lodge in Costa Rica, they are prestigiously endorsed by Orvis and supported by corporate sponsors such as P-Line, Pelagic Gear, Yo-Zuri, Navionics and Mustad. No matter what route you go, Costa Rica is a worthy destination to escaping the harsh bitter Winter.

Below : A Pacific Sailfish is leadered at the boat 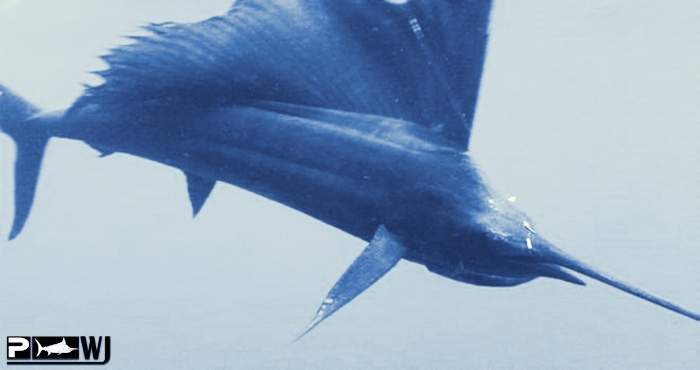 Vanuatu sounds like the name of an exotic planet out of a science fiction film, while not too far off, Vanuatu is a tucked away little chunk of paradise due 1000 miles east of Australia. This archipelago in the southern Pacific though quite tropical in appearance, in truth has a limited amount of plant and animal life. With that being said, the status of the marine life is quite opposite. There are over 4,000 different species of clams and marine mollusks alone. The multi-specked vocanic island chain that makes up the geography helps create a substantial structure for all marine life, attracting a vast array of predators including many top quality bilfish and gamefish.

But discard the fact that Vanuatu is prone to random Cyclones and Hurricanes, then you will find a hidden fishery that is not normally talked about in the sportfishing world. Much of the fishing is strictly done for personal consumption by households and various minor commercialization. However, if you are in the small niche for big game fishing, you have then landed in a phenomenal location.

Billfish, such as Giant Black and Blue Marlin roam these waters feeding on anything they can devour. Tuna run rampart when conditions approve, and inshore Giant Trevally action can be out of this world. Top-waters and jigs and provide for these beast along with hard headed Dog-tooth Tuna. All in all Vanuatu is an isolated spot on the globe and one to be explored by the adventureous at heart.

Below : Raw power owns your tackle... get your gameface on for battle in the South Pacific's Vanuatu ! 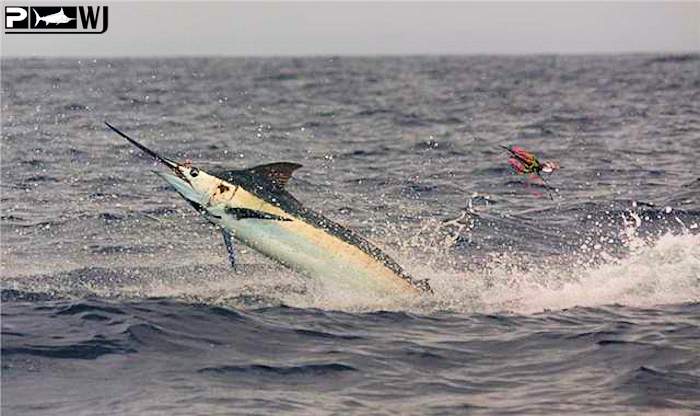 At the southernmost part of Central America lies Panama. It is place like no other with the Atlantic Ocean on its eastern coast and the Pacific Blue on its western coast. The world-famous Panama Canal is the only place you can travel from the Pacific to the Atlantic, and vice versa. But the true impressive fact about the country is its spectacular fishery. Off the coast of Panama lies the Hannibal Bank . Here, the Hannibal Bank is a mecca for some of the largest game-fish on the planet. This region is responsible for countless I.G.F.A. records that continually get demolished. The Pacific coast is known the world over for it's Black and Blue Marlin, along with a killer Sailfish fishery and not to mention an abundance of Tuna and other pelagics.

Panama's diversity is amazing. Pinas Bay and the Hannibal Banks provide anglers with a chance at getting into fish of a lifetime. There are not many places on this planet that give you the access to the variety that this great place holds. With fishing spectacular year-around, and especially rocking from now until late winter, it is an ideal getaway spot to hook into many different massive gamefish.

Below : A truly raw and epic experience as a Marlin explodes away from the boat... 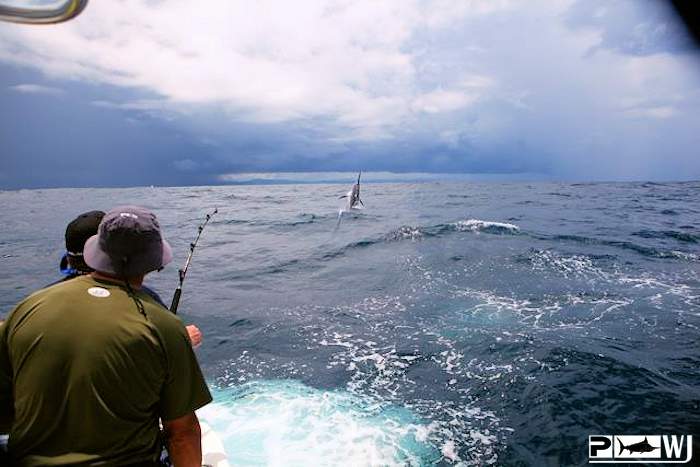 Ask any true Marlin fishermen... Where is perhaps the best Giant Marlin waters that exists anywhere in the world?... and your answer will likely be off Cairns, Australia . Australia is home to the Great Barrier Reef, the largest reef system in the world so large it can be seen from space. Here, there is a near infinite supply of bait to stabalize large populations of the largest Marlin on the planet. Hands down, Australia is tucked away down under, in their own part of the world protected from many of the world's reckless commercial fisheries.

Every year, many... many mega Marlin, including Grander Black Marlin are taken during the southern hemispher's summer. It is almost a sure bet that if you put in the time on the water for a good week, you'll end up with some very impressive fish... and even a very good chance at hitting 800# or greater. Hooking up with a knowledgable crew is the key. PELAGIC Pro Team Captain Luke Fallon of the KEKOA and Kelly Dalling on the REEL CHASE are world-class Marlin-Masters on Australia's Great Barrier Reef.

The fishery off Cairns and it's surrounding waters is simply the most productive in the world for Giant Black Marlin. Year after year granders and landed... with many being released. The waters off the Great Barrier Reef will not disappoint even the most adrenaline thirsty angler in their quest for mega Marlin.

Below : A Black Marlin at the wire on Australia's Great Barrier Reef... 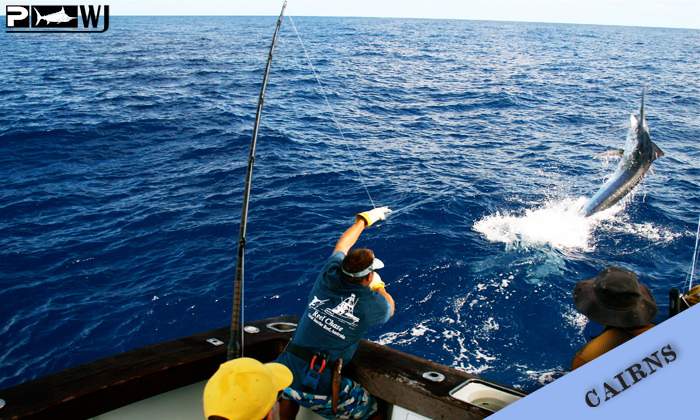 Guatemala is known the world over as having one of the best sailfish fisheries in the entire world. However, within the masses of Sails does roam Guatemala's share of Marlin. If numbers is your game and don't mind a mixed bag of billed treats, then consider the waters of Guatemala for your '11 Marlin adventure!

Below : Captain Brad Philipps with another respectable Billfish release out of Guatemala 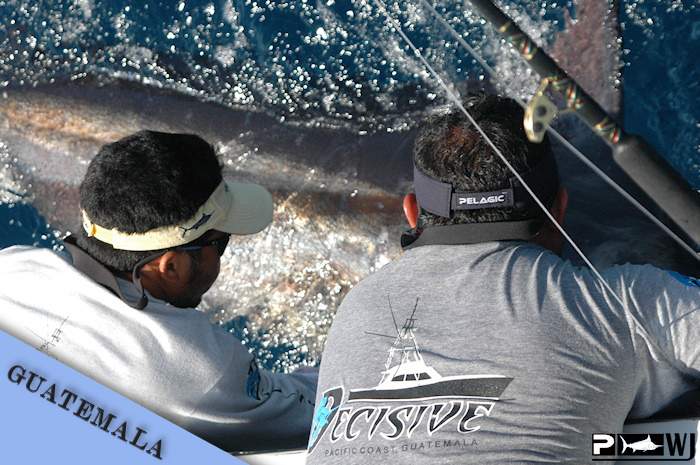