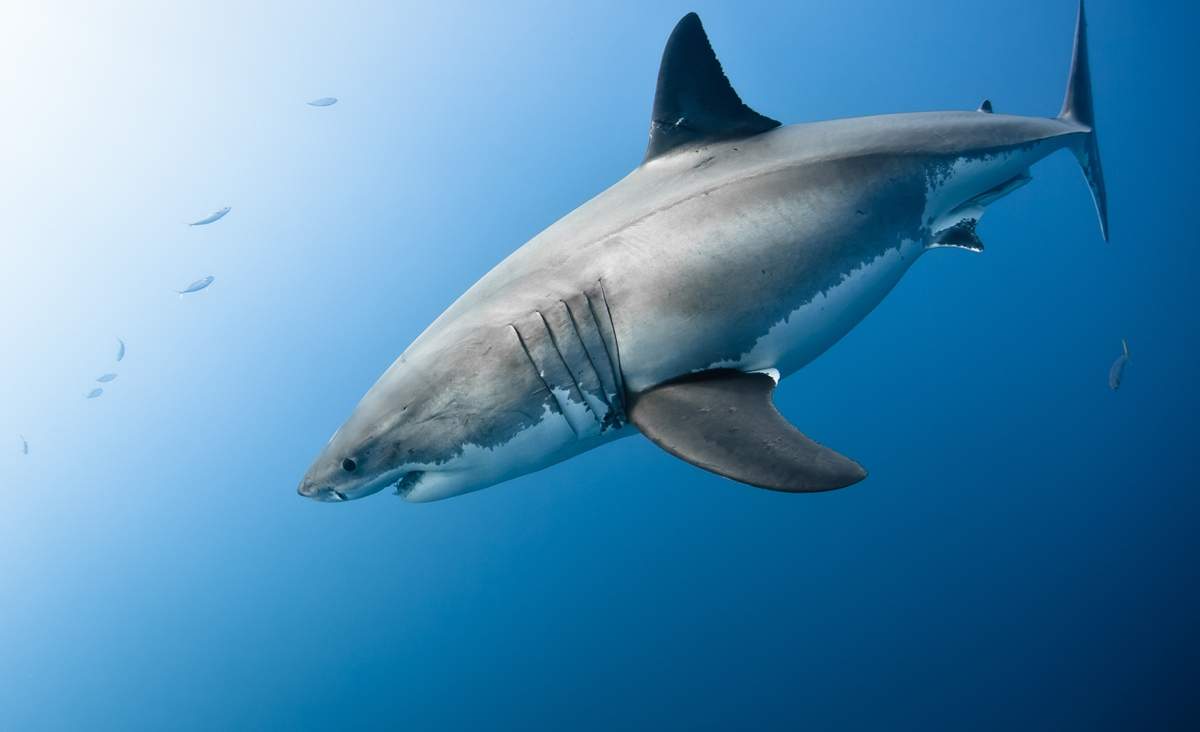 Typically, spring is the beginning of shark season in southern California waters. This is the time of year when most of our pelagic sharks (e.g., blue, mako, salmon, white, common threshers) are migrating back to the Southern California Bight to give birth to their young and tank up on abundant anchovy, sardine, squid, tuna crab and mackerel. 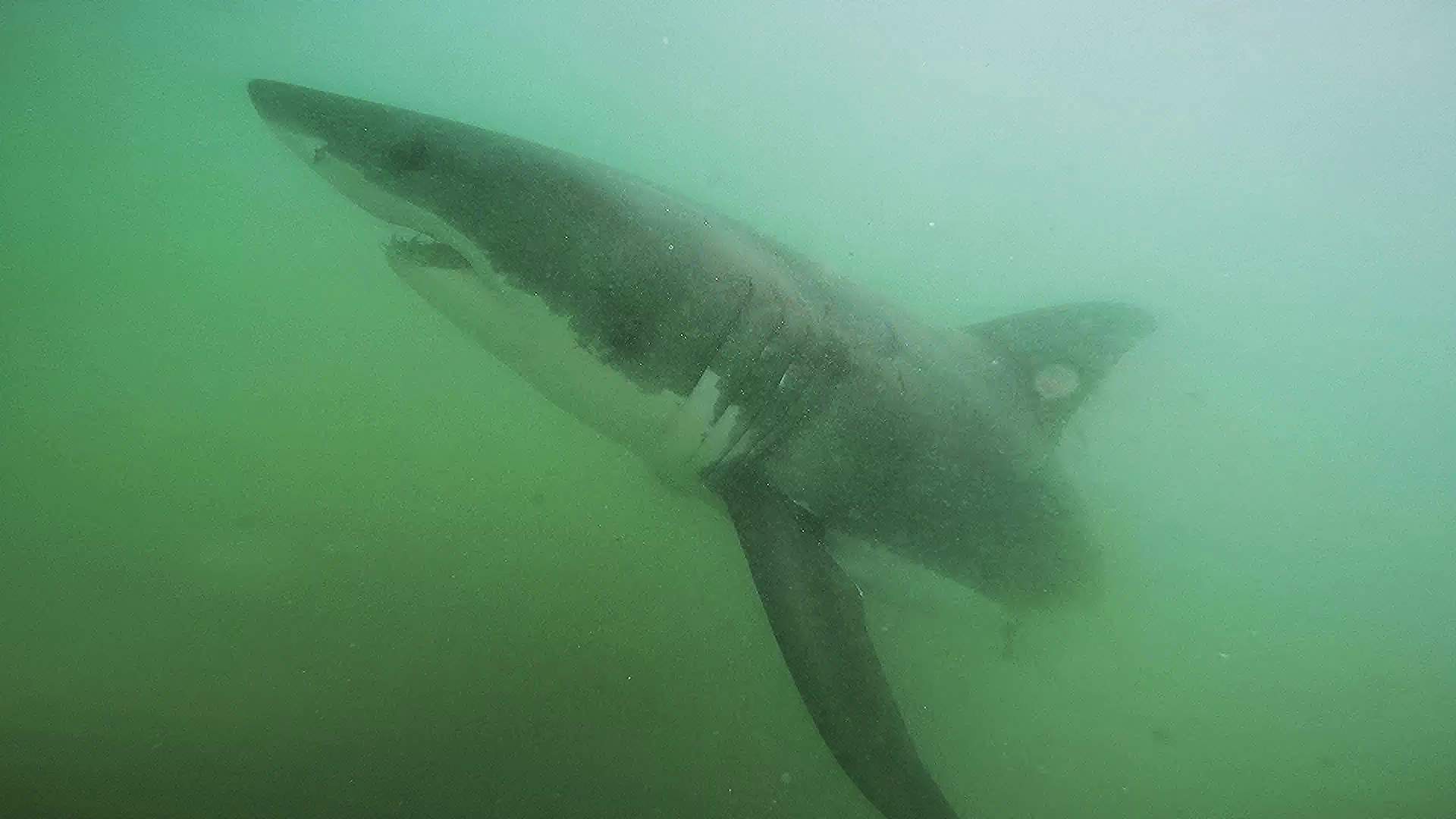 Selfies of a baby white shark. The Shark Lab deploys Remote Underwater Video Systems (RUVS) along SoCal beaches once a week in order to try and get shark selfies. These images can be used to identify individuals since they have unique markings along the face and gills. The Shark Lab is currently working with computer programmers to develop facial recognition software for these sharks.

Young white sharks will come in close to shore using shallow beach areas as a nursery and to learn how to feed (mostly on abundant stingrays). Over the last 10 years we have been seeing more and more juvenile white sharks along our beaches. Based on our research, we believe this is because the white shark population is increasing due to protection under State and Federal law. 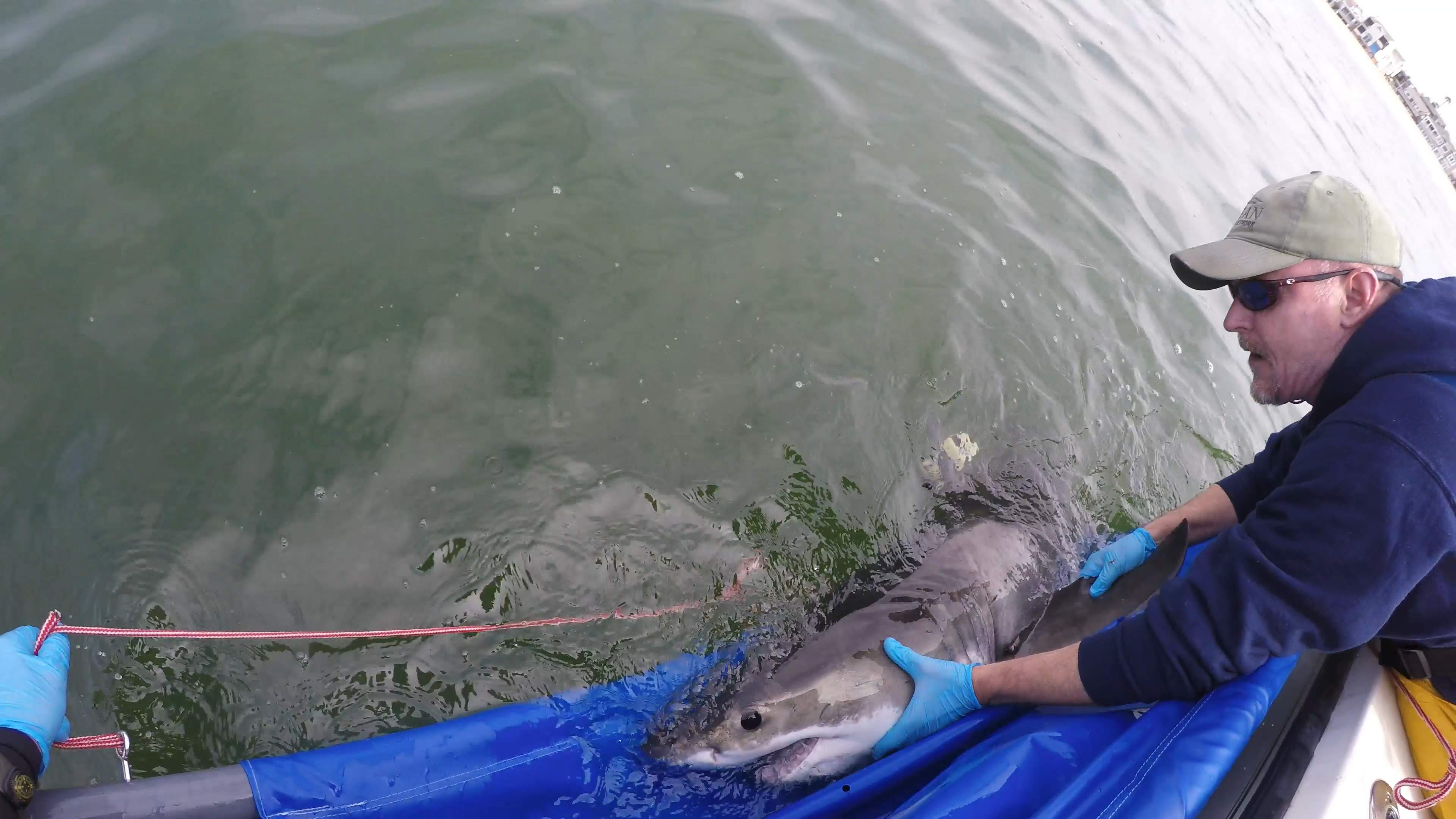 A one-year-old white shark getting released off Belmont Shores, Long Beach, after being fitted with a Smart tag (shark fitbit) which measures 3D acceleration, temperature and depth. The system – which clamps on the dorsal fin – also has an acoustic transmitter so it can be tracked from a boat, a videologger (so we can see what the shark sees) and a radio transmitter so we can recover it after it pops off the shark after 24 hrs. 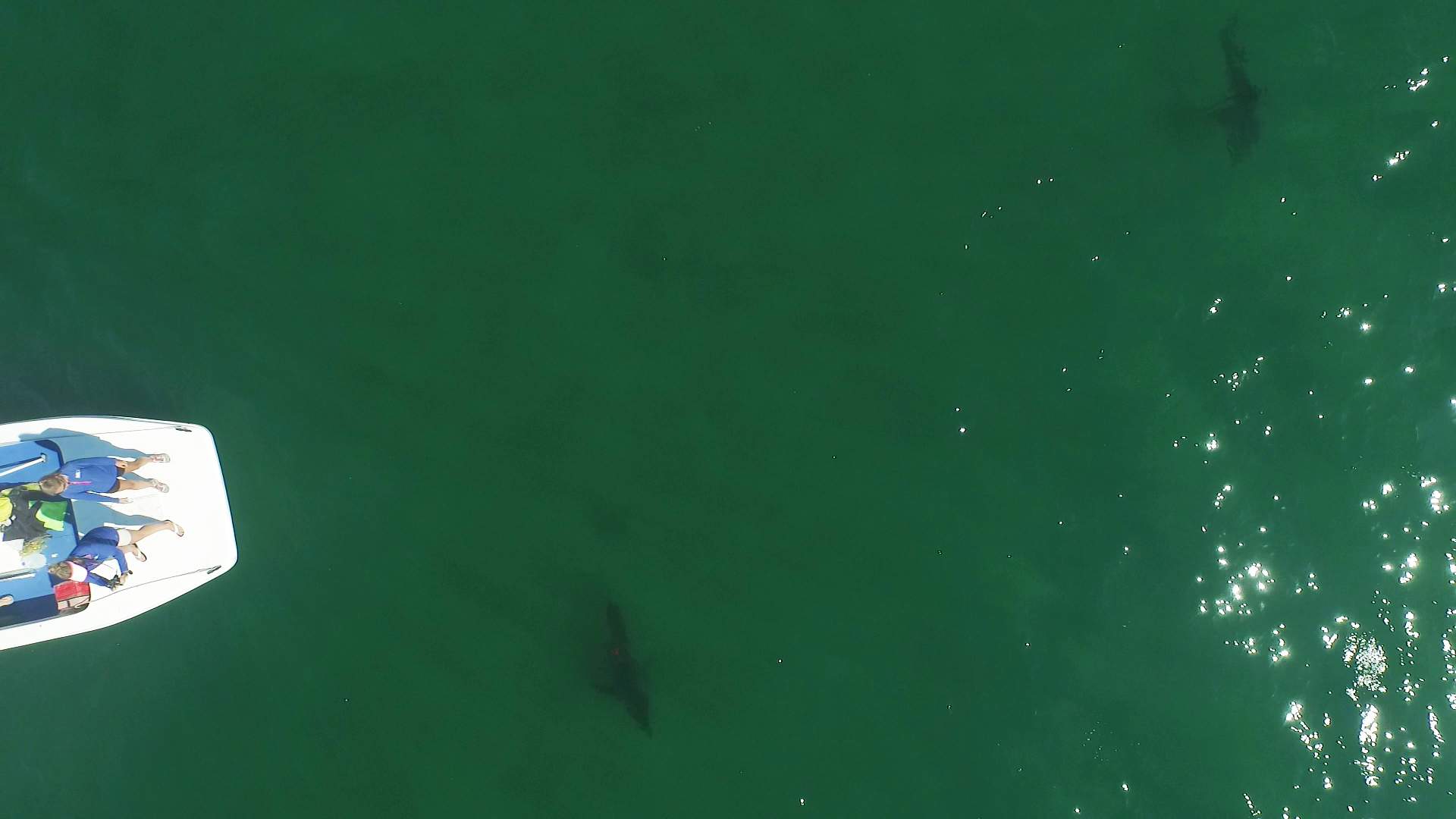 Drone footage of a baby white shark off Sunset Beach. These young sharks like the habitat just outside the wave break and will mill about these areas for days at a time. We believe they are there because they feel safe from predators, there’s an abundance of food (stingrays, etc.), and the water is warmer.

Our tracking research has shown that young white sharks typically migrate to Baja coastal waters during winter months; however, they remain in SoCal waters during strong El Nino seasons. 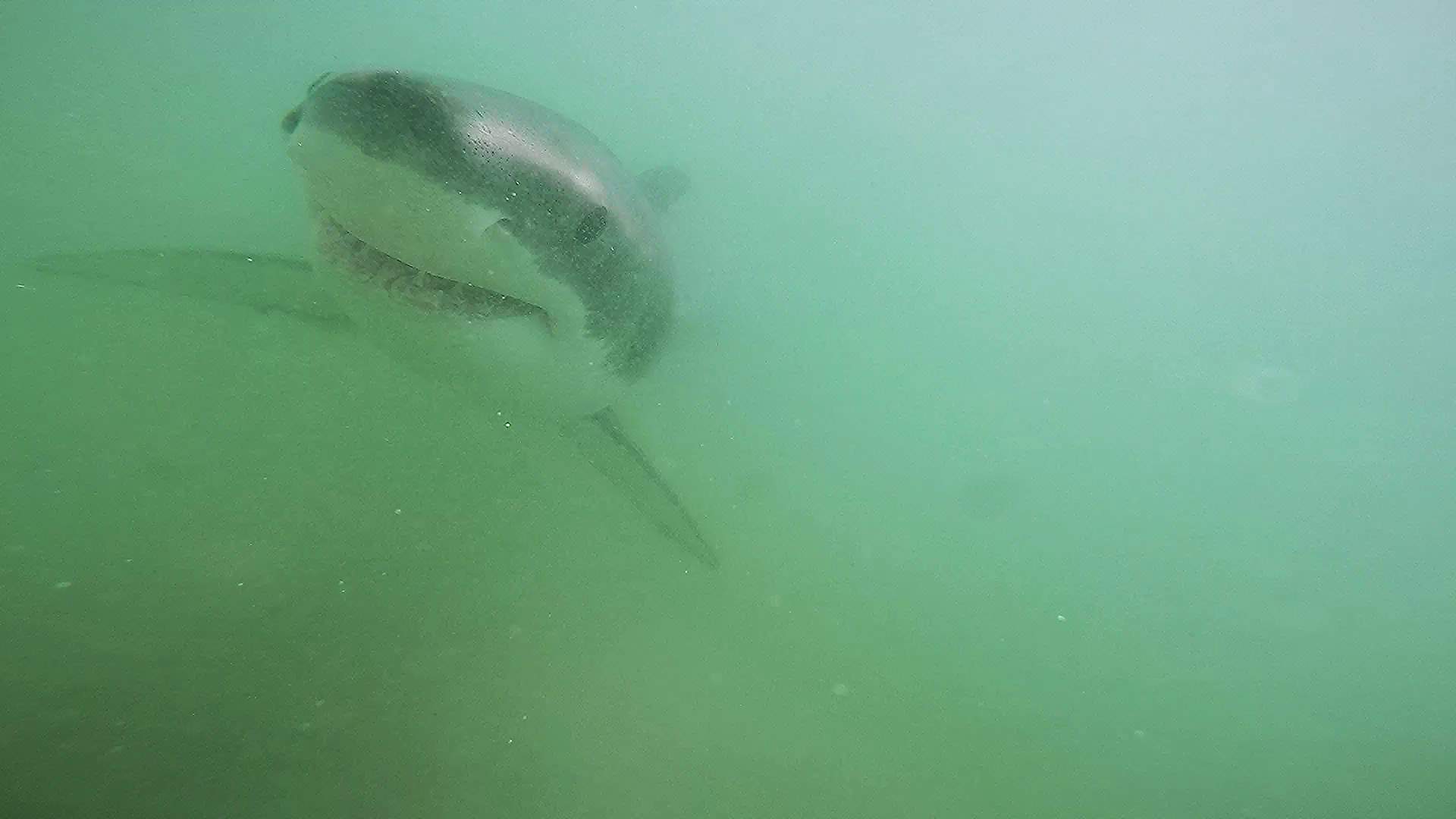 It’s important to remember that it is illegal to target or land white sharks in most places where they occur in numbers (e.g., California, US waters, Mexico, New Zealand, Australia, and South Africa) and the fines are pretty steep. If you incidentally catch a juvenile white shark try to remove the hook if you have a good de-hooker, or cut the line at the terminal tackle – steel hooks will rust out over time. White sharks are pretty hardy and we need those sharks to help keep the marine mammal population in check.