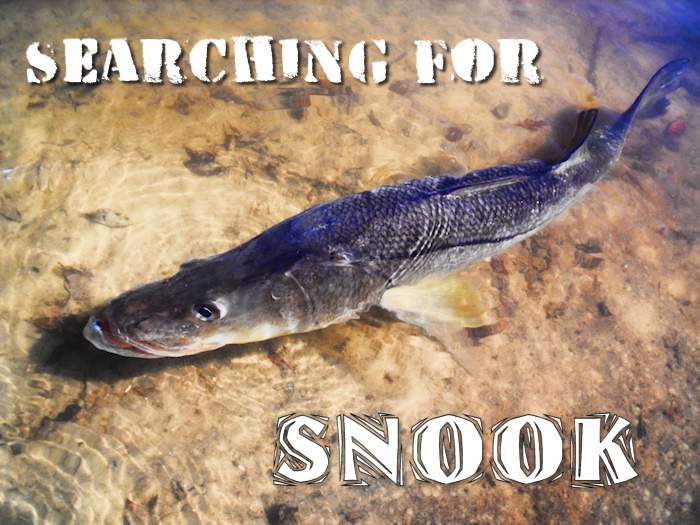 With several different species of Snook inhabiting our oceans, it is the Common Snook which dominates the ecosystem of the Florida shallows. The common snook ( Centropomus undecimalis ) is a species of game fish in the family Centropomidae of the order Perciformes. This species is native to the coastal waters of the western Atlantic Ocean and Caribbean Sea, from southern Florida and Texas all the way down to Brazil.

One of the largest snooks, Centropomus undecimalis grows to a maximum overall length of about 4-1/2' and can maintain a weight of over 50lb, though true brutes of that size are rare. The common snook possess drab coloration except for a distinctive black lateral line. It can also possess bright yellow pelvic and caudal fins , especially during spawn.

Below : A Solid Snook is taken from kayak by the Mangohunter 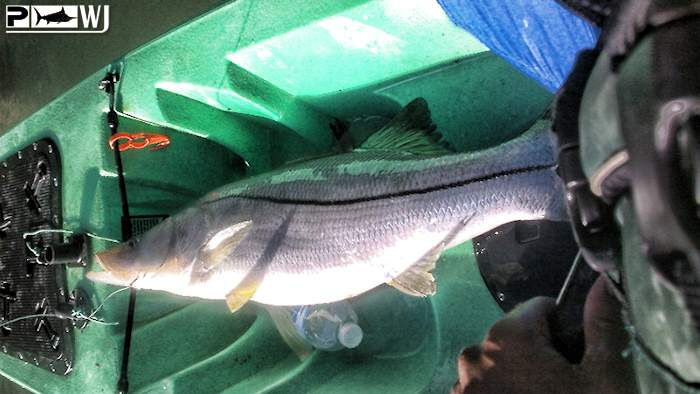 Due to careful game restrictions, Florida has a healthy population of Snook. It is amongst the very favorite gamefish of shallow water anglers due to their hard-to-fool enticing and powerful fight. Snook are often taken by wading, kayak, and casting in the shallows via flats boat. They will often hit a variety of baits and lures, but presentation will always be key with these shallow water brutes.

Below : Doug with a beautiful Snook in the Florida shallows 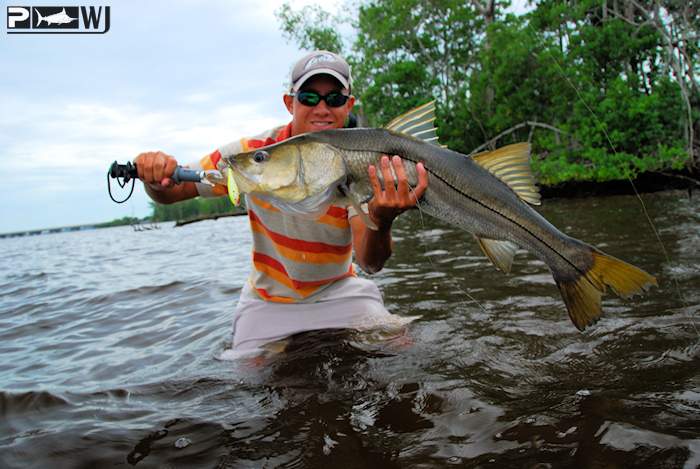 Snook are most commonly found in the shallow coastal waters up to 50', along with inhabiting nearby estuaries, and lagoons. Snook have even been known to enter fresh water. It is a very carnivorous species, with a diet dominated by smaller fishes, and crustaceans such as shrimp, and occasionally crabs. Live-baiting using fluorocarbon leader is often essential to make presentation as natural as possible.

Below : Doug releasing another awesome Snook taken in the Mangroves 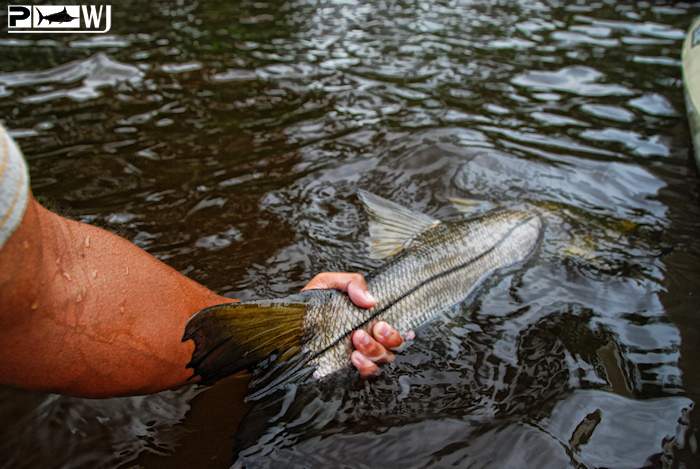 Considered an excellent food fish, the common snook is fished commercially and raised in aquaculture although it is not available for sale in the United States. It is also prized as a game fish, being known for their great fighting capabilities. That is why countless anglers take to the water to pursue these highly regarded fish. The state record for Snook in Florida waters is 44lbs 3 oz. Interestingly enough, the state record Texas Snook is 57lbs 8oz in 1937. Due to heavy overfishing in the middle of the century, the population of common snook in Texas dropped to nearly nothing. Today they are making a slow and steady come-back.

Below : Tim posing with a quality Snook in the Mangroves 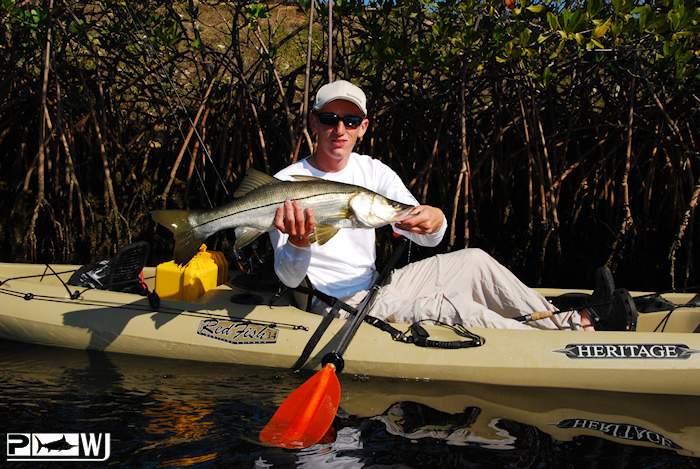 Perhaps one of the most exciting methods to hunt down Snook are by way of Kayak. Stealthy anglers are able to manuever around and explore the mangroves of south florida where many of these common snook love to call these structures their home. Throwing jerk baits, gulp, and live shrimp can often produce positive results. As always, it comes down to presentation.

Another area of interest is the grass flats off the Florida Everglades where Capt. Benny Blanco has mastered the art of stalking these hard to tempt fish. Snook are also often taken via fly-rod if conditions permit. Regardless of whether in the boat or in a molded plastic kayak, if you do hook in to a snook of any size you will have a great inshore battle on your hands. 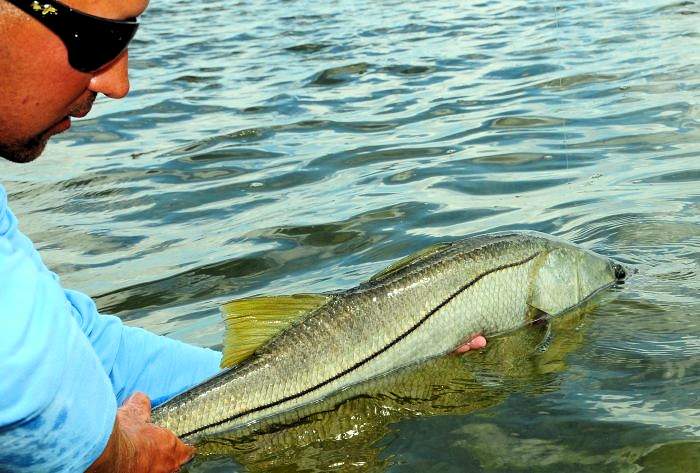 The Snook fishery is very sensitive. Snook are very suseptible to any red tide and to unexpected harsh winter freezes. They do not grow as fast as other reef and pelagic species, however can be sustained if properly managed. Thankfully Florida has careful restrictions and bag-limits along with a 'season' to even be able to harvest these fish. While the table fare is indeed very good, many anglers are condoning and promoting catch and release of this species. This fish is highly regarded by the anglers of Florida and thye respectfully want to keep it around for future generations to enjoy.

Below : Another massive common Snook being released to fight another day... 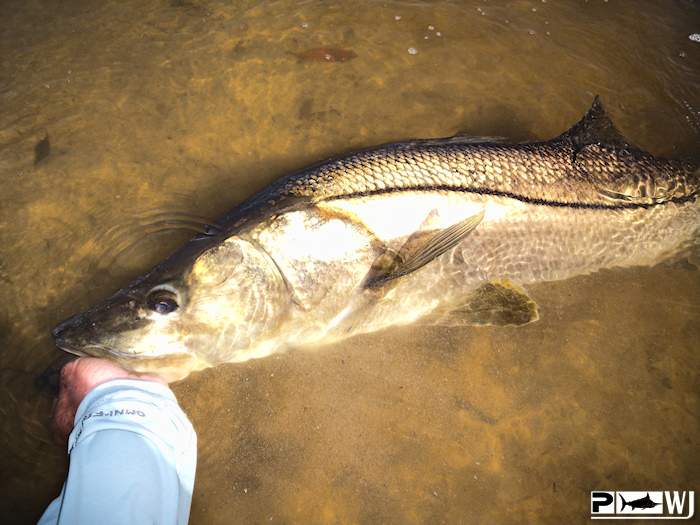