The glow of a new sun glistened a shimmering crimson hue where the warm Pacific and Sea of Cortez waters converge at Baja Peninsula’s famed Land’s End. As the hour turned to 0700 on June 4th, 2016, twin flares – playing chameleon to an astonishing sunrise – were shot to the sky by Cabo San Lucas’ Port Authority and Naval Commander from the bow of the industry-iconic Baja Cantina Center Console. The ocean turned to a racetrack of churning, frothing liquid as 32 teams with $100,000 in cash and prizes on the mind galloped towards their desired fishing grounds. The 2016 Cabo Summer Slam presented by PELAGIC was underway. 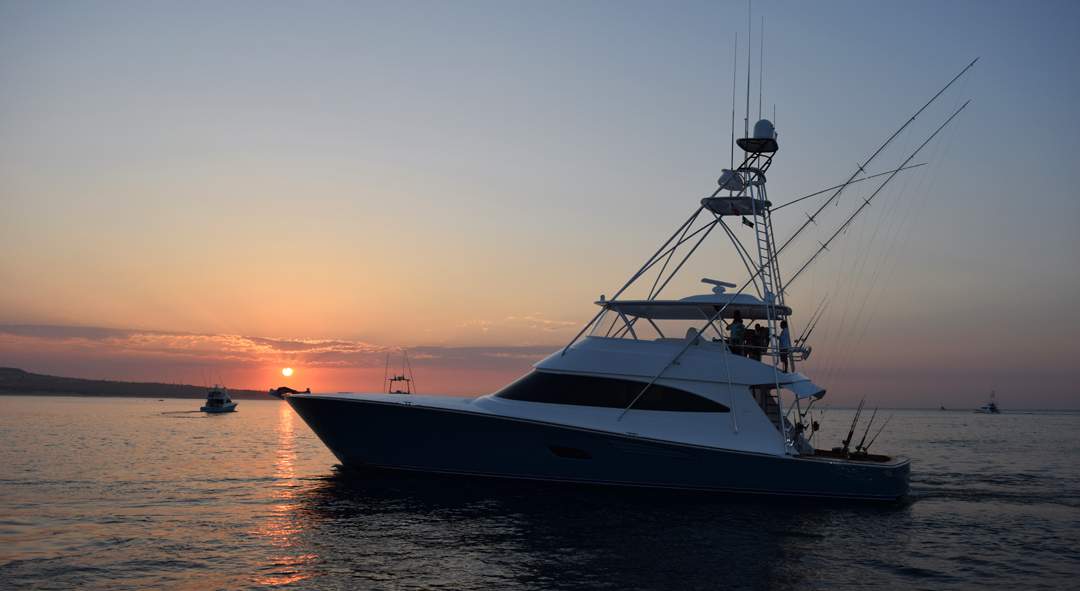 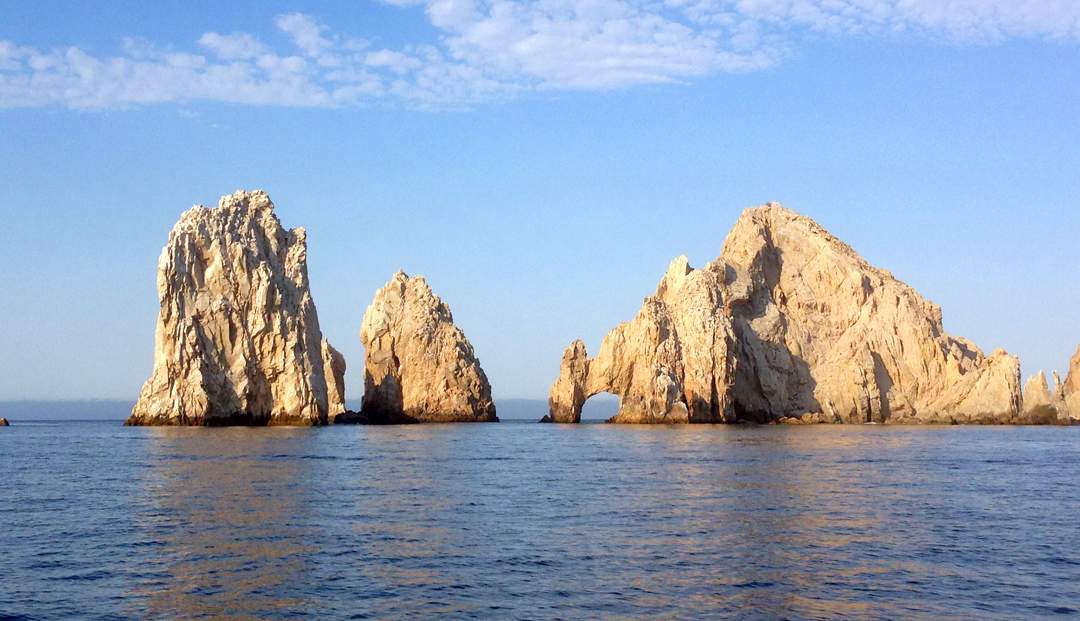 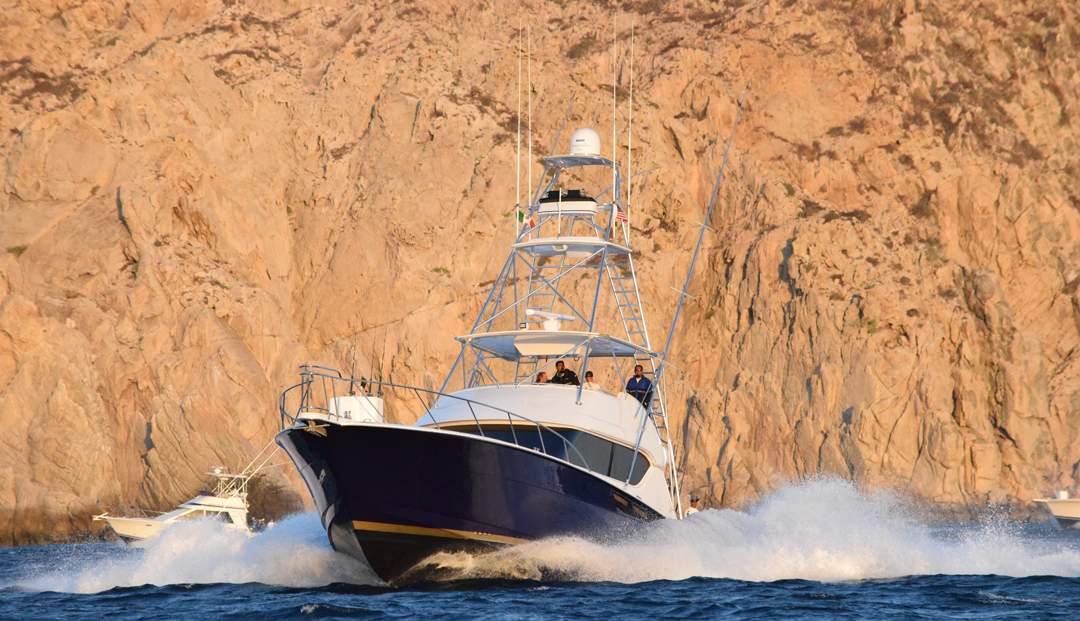 The Cabo Summer Slam is a multi-species, four-division tournament structured to focus on catching a variety of Pelagic gamefish species; a trait that Cabo San Lucas is so well-known for. In the Billfish Release Division, teams can score 100-points by releasing Striped Marlin and Sailfish; while Blue and Black Marlin, and even swordfish provide 300-points per release. In the Tuna, Wahoo, and Dorado Divisions, teams are ranked by their single-heaviest fish of each respective species. With the added option for daily jackpots and over 80% of the field registered “all-in” across the board, there was a $100,000 purse in cash and prizes on the line. 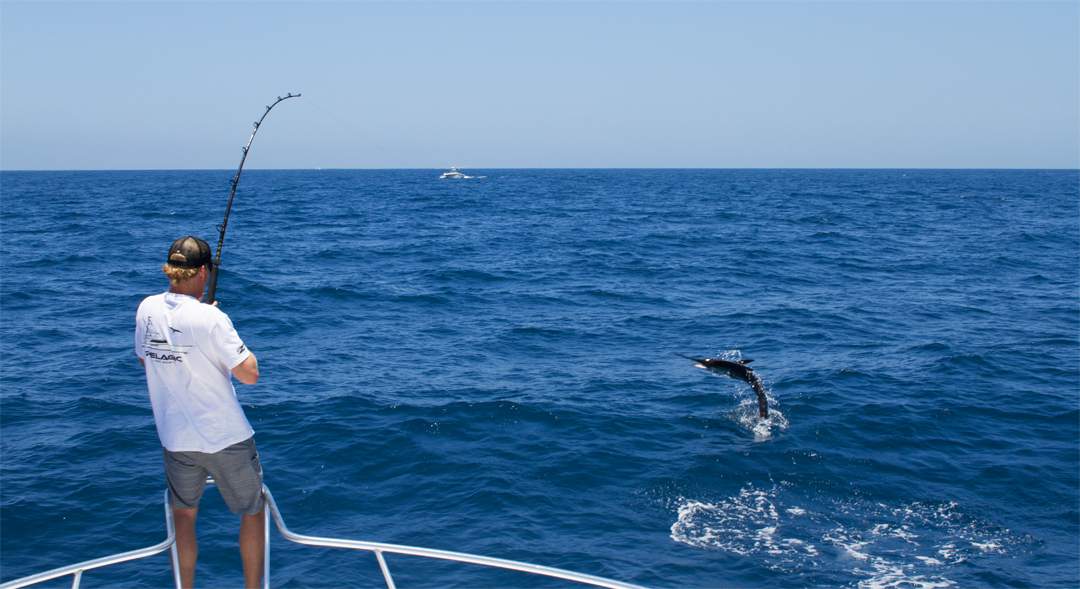 At registration on Friday, June 3rd, all teams were welcomed with some fantastic prizes during the tournament kick-off party extravaganza and super raffle hosted by Baja Cantina in Marina Cabo San Lucas. Participants received fluorocarbon spools from Seaguar, drink and food vouchers from Tanga Tanga Sports Bar, clothing and polarized sunglasses from Pelagic Gear, and a chance to win some excellent products from Crane Lures, Ballast Point Brewing & Spirits, TrollPro, and PENN Reels. Many other incredible prizes were on display to be awarded after the conclusion of the weekend event including a general entry into the prestigious Bisbee’s East Cape Offshore Tournament, a full-day charter from Picante Sportfishing, custom-made tournament rods by SEEKER, and trophies for all first, second, and third place winners from Gray Taxidermy.

[ Below: A large crowd on hand in Baja Cantina for the kick-off extravaganza and captain's meeting | All smiles from the Pelagic Girls | Tournament trophies and prizes ready for the taking]

Day one provided great action for our tournament fleet with 71 billfish released in total, as well as some competitive gamefish counts. Team NICE RIDE aboard Turning to the Right captained by Ty Valli sat atop the division for billfish released with 800-points (7 striped marlin, 1 sailfish), securing them a daily jackpot as well. Our Gamefish Divisions were extremely tight during day one’s weigh-in at the official tournament weigh station held in Gricelda’s Smokehouse; a few teams separated only by mere ounces. When all was said and done, our first day gamefish leaders and jackpot winners were settled accordingly: Team SEA DUCE ME – 25.6 lb. yellowfin tuna; Team TEJAS – 36.6 lb. wahoo; Team GO DEEP – 18.1 lb. dorado. Overall, a productive day on the water with all but two teams putting points on the scoreboard.

[ Below: Team NICE RIDE aboard TURNING TO THE RIGHT heads off in search of the day one billfish lead | The beautiful Pelagic Girls awaited teams at the weigh station | Angler Dave Brilhante (San Diego, CA) of SEA DUCE ME weighs in a jackpot yellowfin | Angler Will Dicey and Team GO DEEP present their catch of the day | Angler Edward Cobb of Dallas, TX poses with the day one wahoo jackpot earned for TEJAS]

Excellent sea and weather conditions set the stage for the final day of the 2016 Cabo Summer Slam – mild swells and little wind encouraged a large group of the fleet to make the longer runs to some of the famed offshore banks and seamounts within reach of Marina Cabo San Lucas in hopes of large tuna and high billfish counts. This decision proved to be the turning point for a handful of tournament boats; one team in particular reaped the benefits of the long run and cashed in on some excellent fishing. 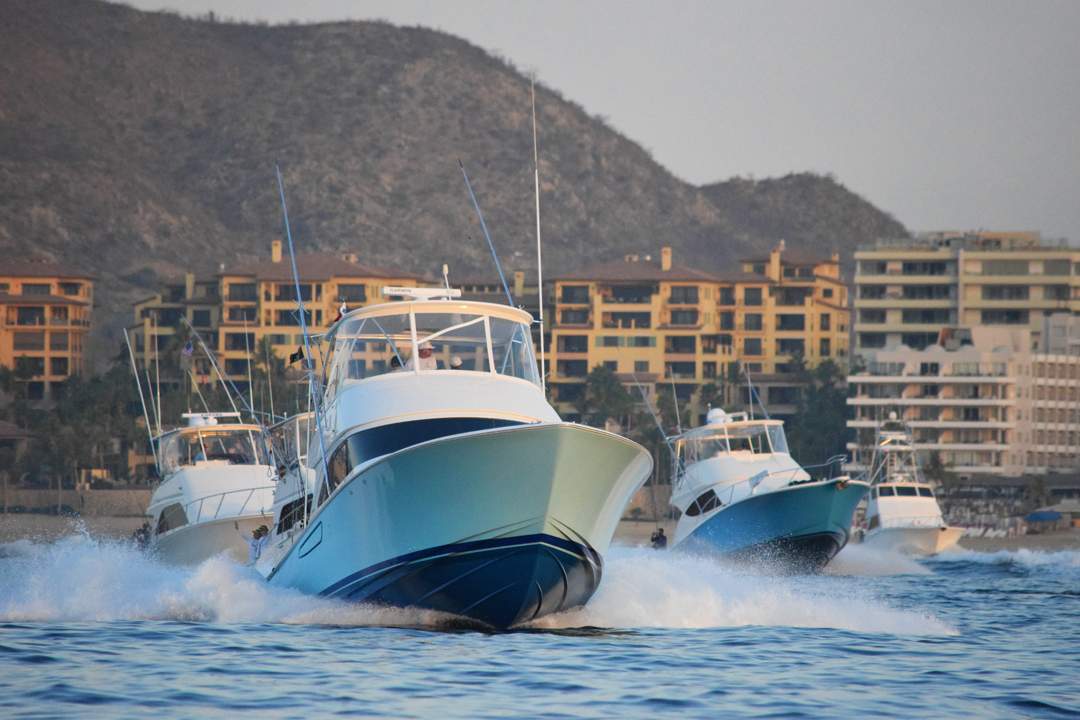 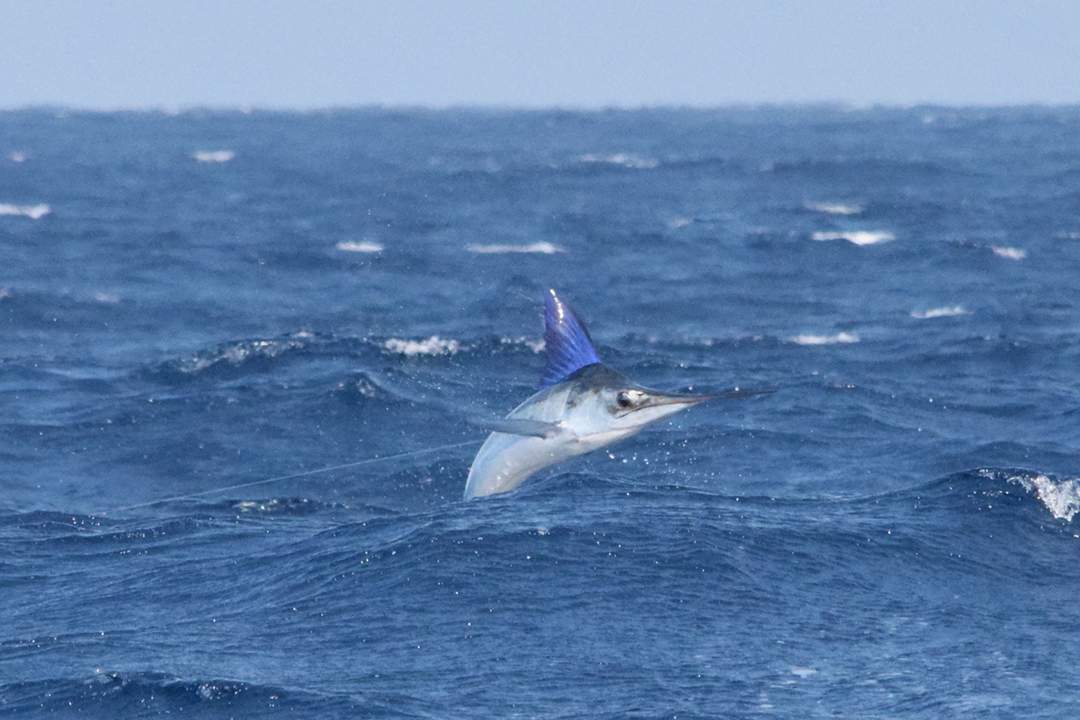 Returning to the docks was the aptly named TEJAS – a group of anglers from the Lone Star State – who weighed-in both the tournament best 97.6 lb. yellowfin tuna and 41.1 lb. wahoo to earn them their second and third daily jackpots of the event, plus first place in both respective divisions. Their total tournament earnings: $25,695.00 , plus a great package from our fine sponsors including the general entry birth into the 2016 Bisbee’s East Cape Offshore Tournament. 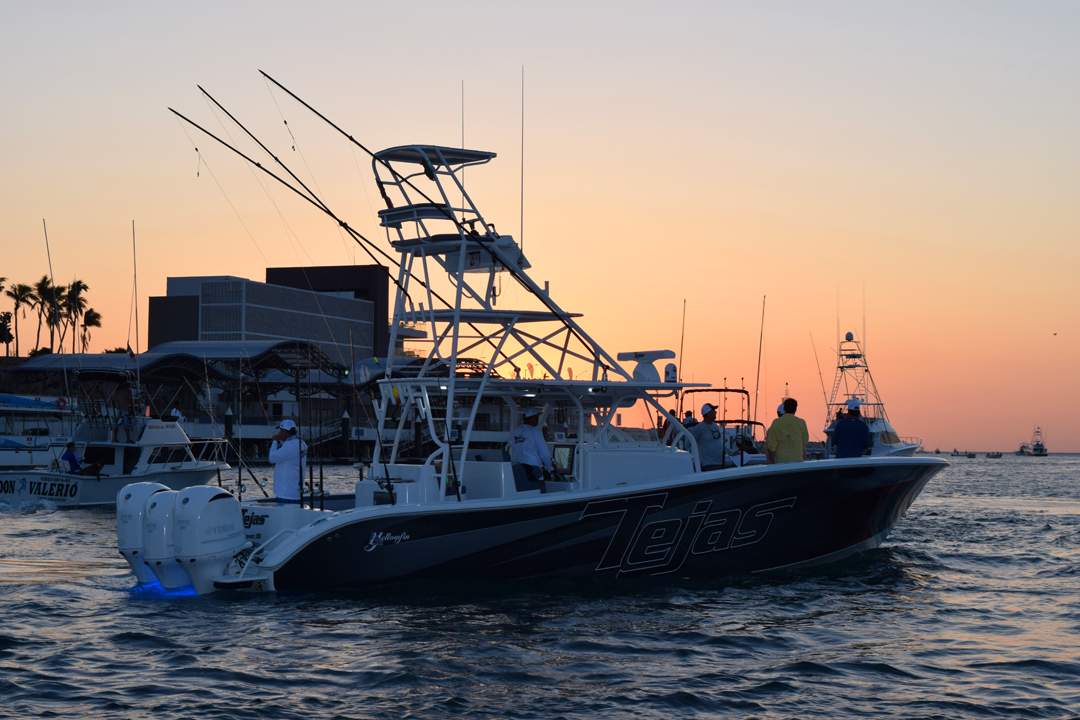 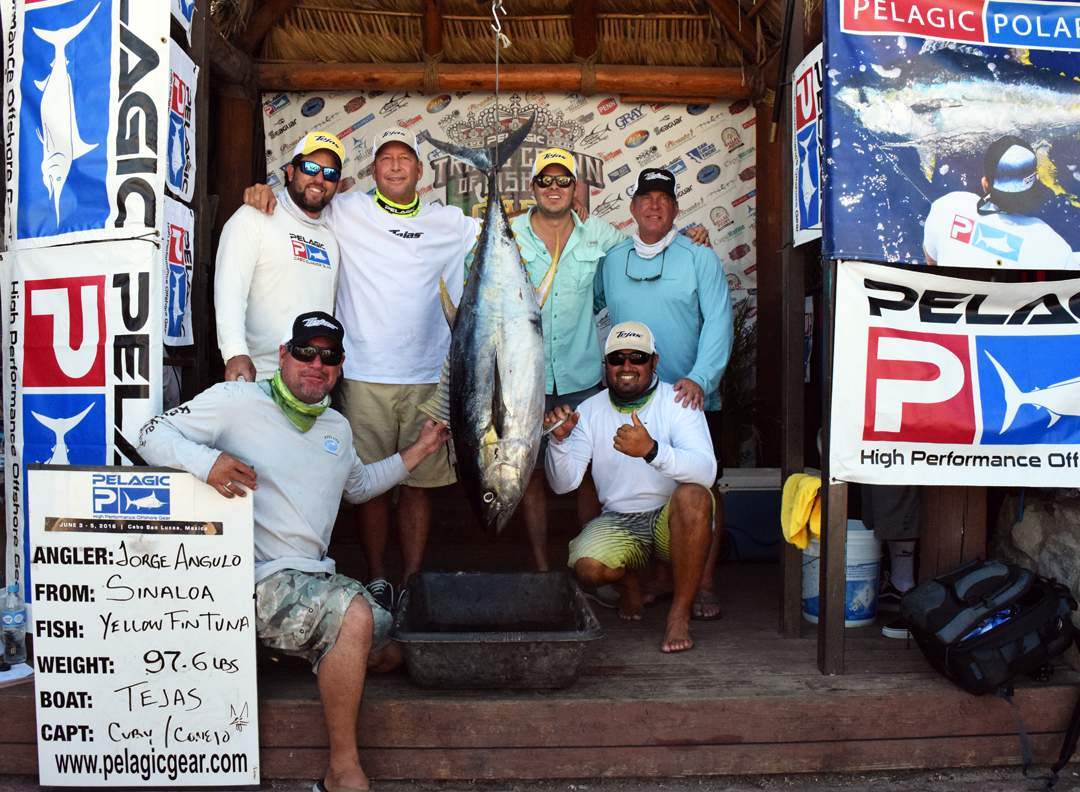 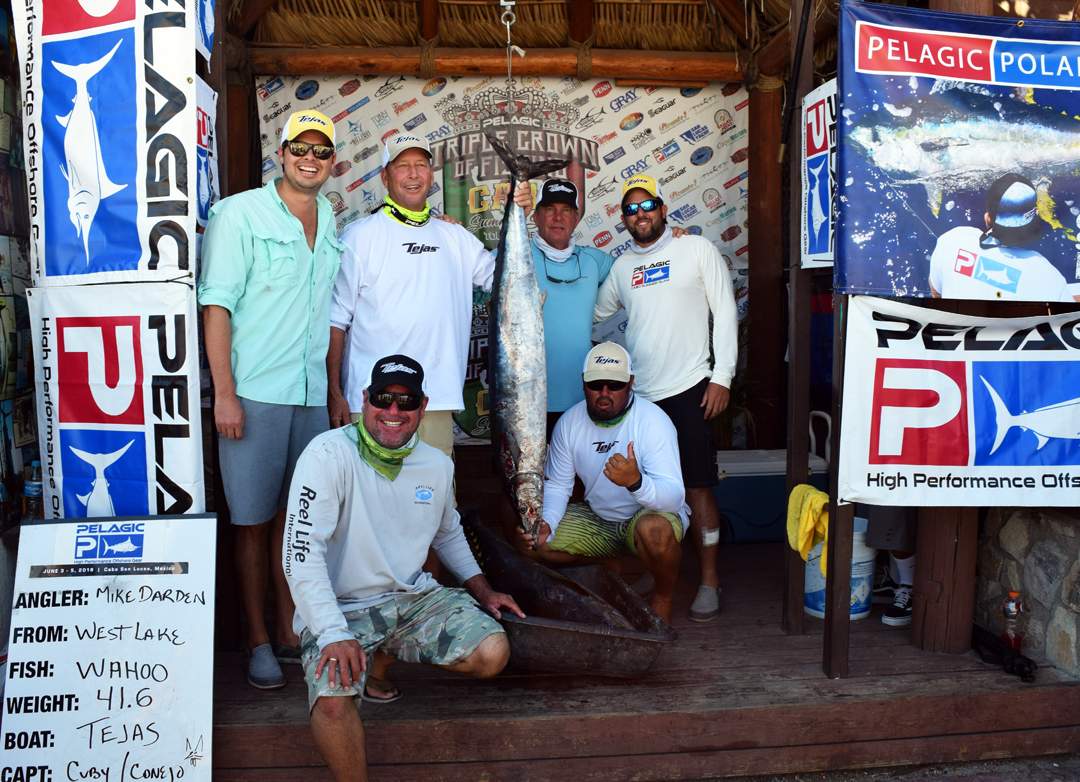 The billfishing remained red-hot during the final day of fishing with 93 combined striped marlin released by the 32-team tournament field. There were many teams that posted great numbers of billfish, but in the end it was Team HOT ROD that, well, had the “hot rod” throughout the event and scored 1300-release points on the final day to give them the daily jackpot. Combined with their day one score, HOT ROD secured first place in the division with 2000 total release points. Their tournament earnings: $10,935.00 , plus a full-day charter from Cabo-based Picante Fleet aboard their brand new 33’ “Magnum” by Mag Bay Yachts. 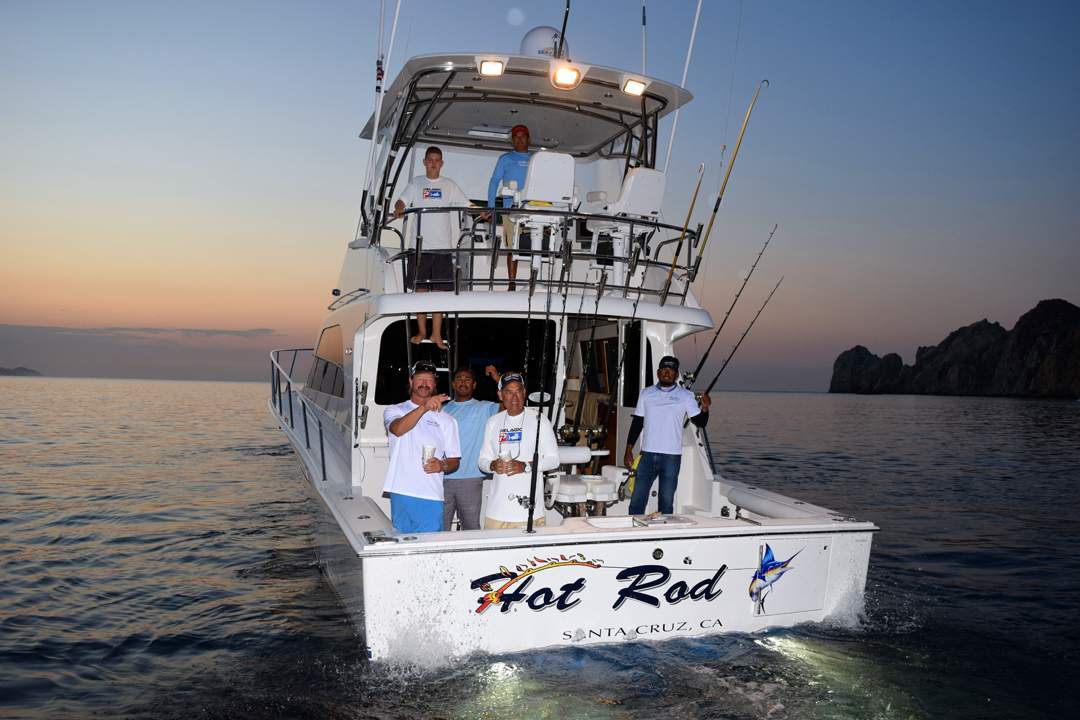 It was a tight race in the Dorado Division, with the two biggest of the tournament coming into the scales during the event’s final weigh-in. A group of first-time tournament anglers from Newport Beach, CA, aboard Whata Journey emerged victorious with their 25.6 lb. fish, earning them one of our first place trophies from Gray Taxidermy, multiple tournament rods custom made by Seeker, and a Penn 30VSW Reel. Unfortunately for the Newport crew, they chose not to enter this jackpot category, so it was our second place dorado, a solid 23 lb. bull from Team EL DIABLO and angler Steve Erwin (Irvine, CA), that earned the daily jackpot. 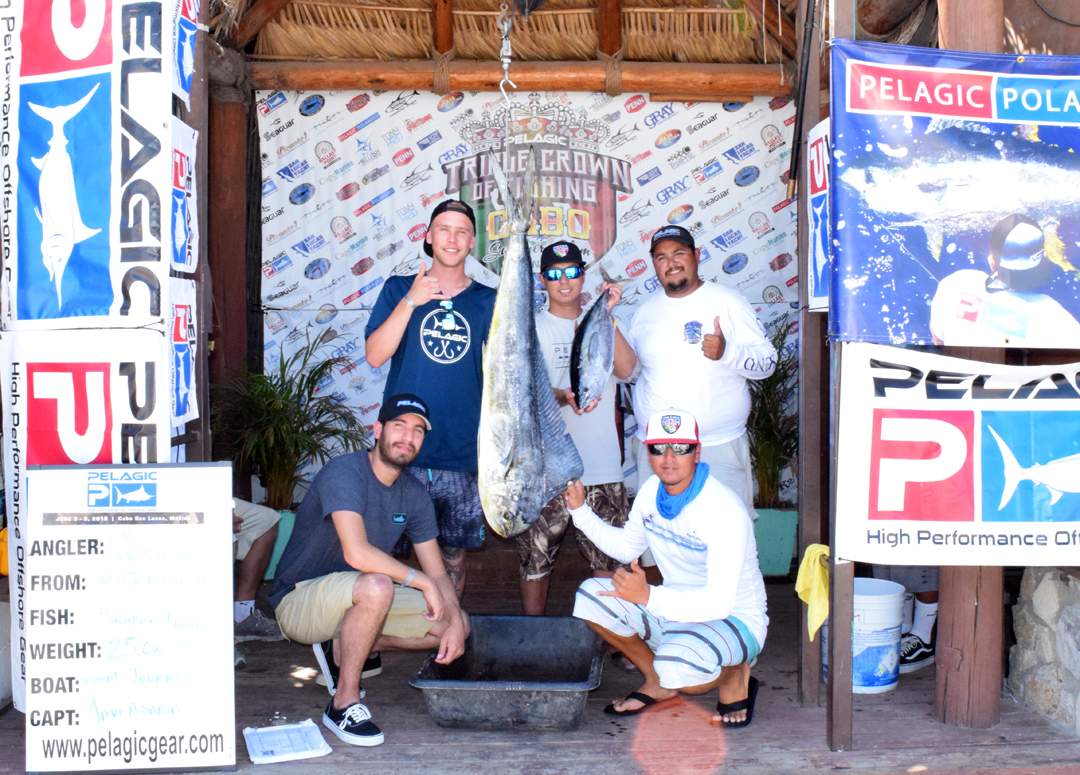 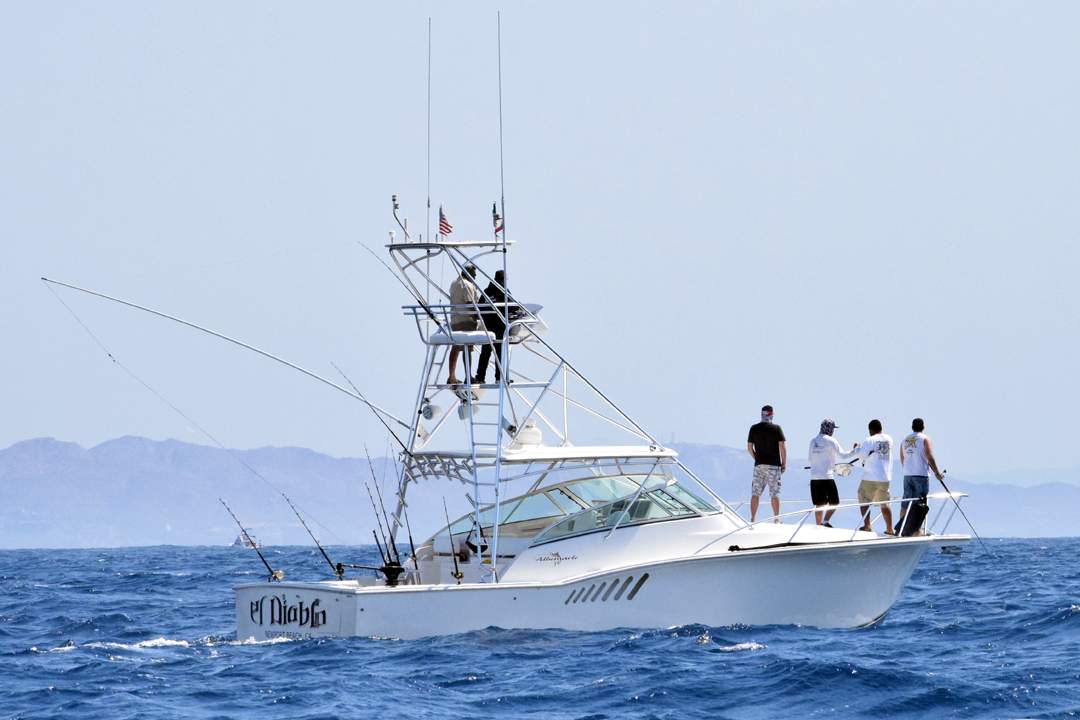 After all was said and done, all fish weighed-in at Gricelda’s Smokehouse, and all 164 billfish releases documented at tournament headquarters in Baja Cantina, the results were announced and trophies/prizes awarded to all winning teams: 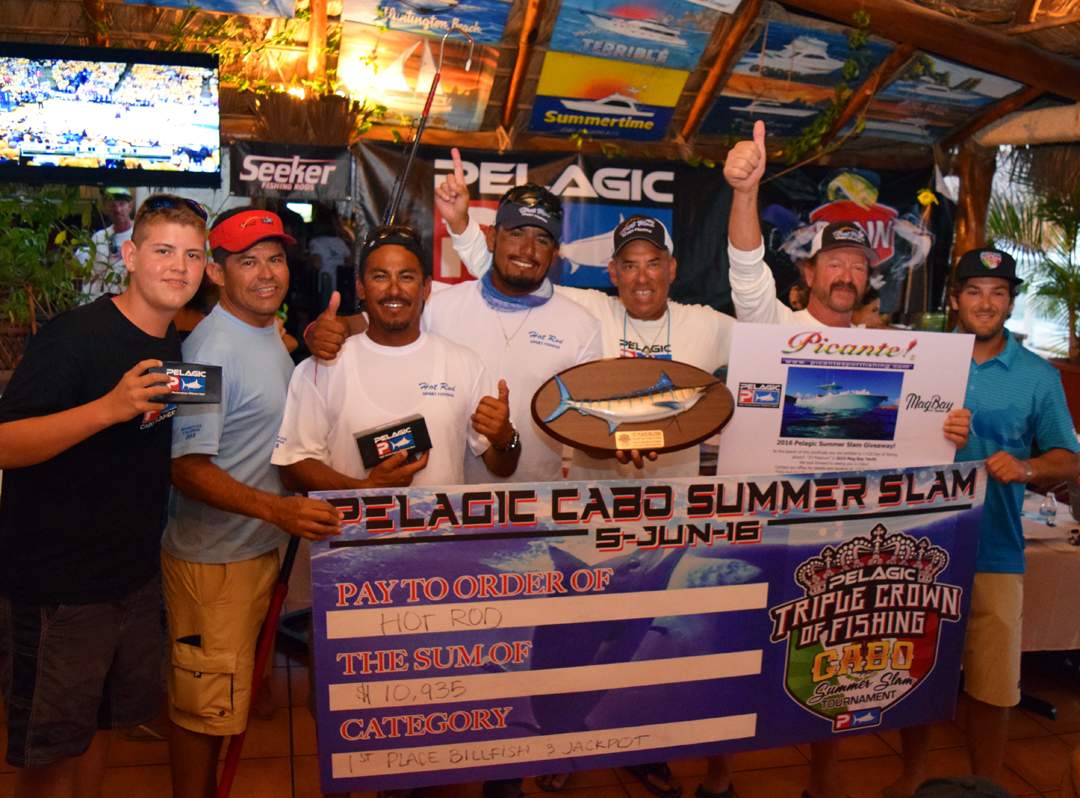 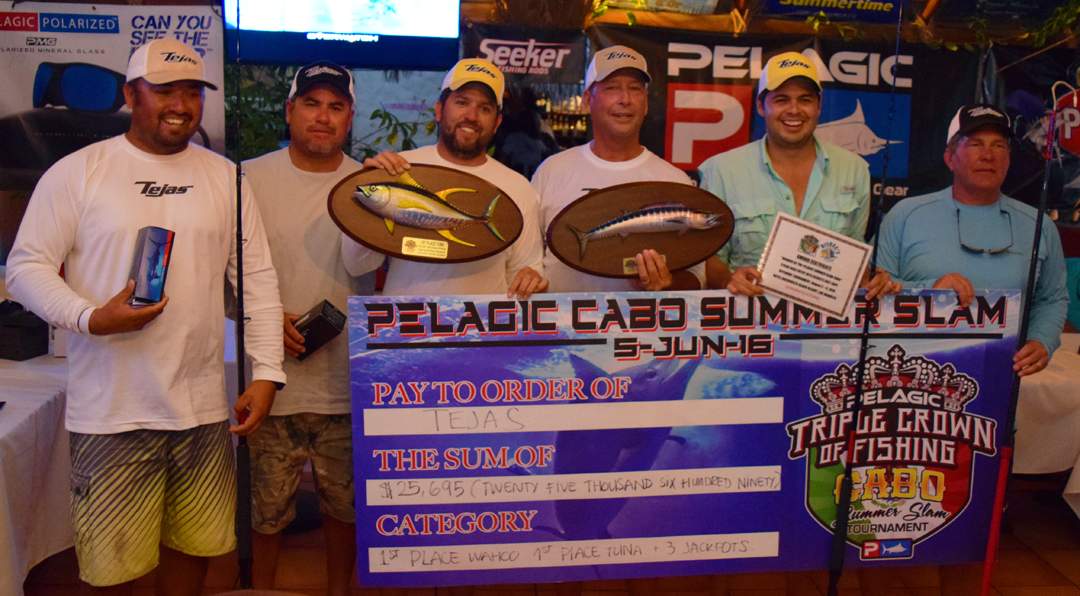 This event is rapidly gaining popularity in Cabo as the most-fun tournament south of the border and as a great way to start the summer. With large amounts of cash on the line, an entertaining kick-off party in the marina at Baja Cantina, and incredible prizes/donations from our sponsors, it’s no wonder the Cabo Summer Slam has more than doubled in size since its inception in 2014. Dates are set for the 2017 event... mark your calendars for June 8-10, 2017!

Thank you again to all tournament participants for making this another fun-filled, yet competitive event… We hope to see you again next year! 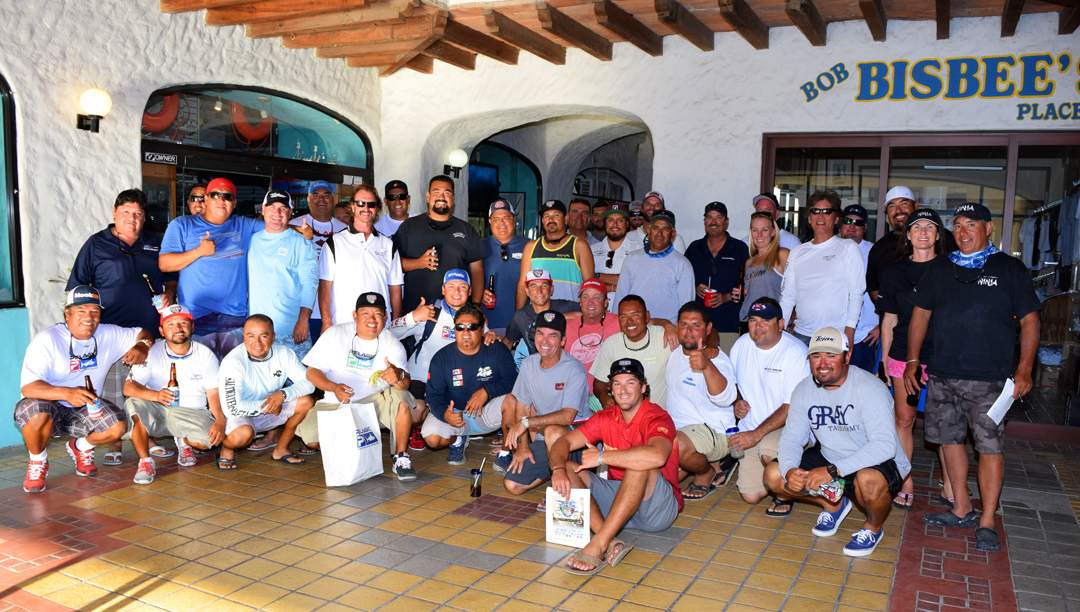 And finally, we’d like to give one last THANK YOU to our generous sponsors; without their support, prizes, and donations, we simply wouldn’t be able to create the welcoming atmosphere we’ve envisioned from the start!