Beyond Granders: Chasing the World Record 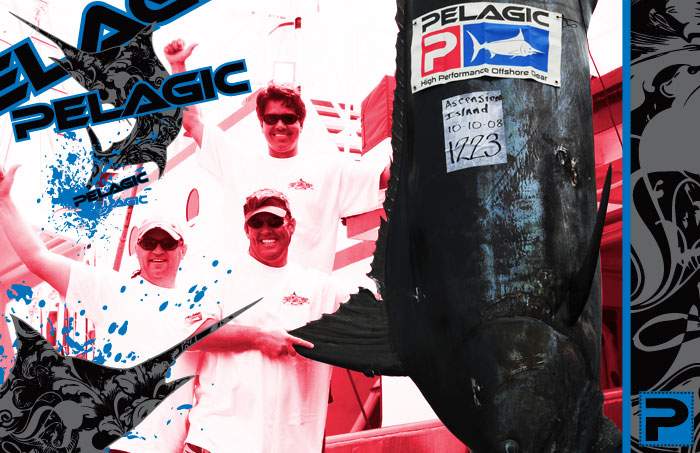 An all star crew consisting of PELAGIC Pro Team Captains Clay Hensley , Laine Landry , Oskie Rice , and Al Roper have recently reported back from Ascension Island in the south Atlantic Ocean. The group is part of an elite team affiliated with the legendary worldwide mothership operation "M_adam & Wild Hooker." _

The team is on an ambitious global mission to explore the planets most fertile oceans, seeking world-record-sized gamefish. One record that is certainly in the minds of this crew is the all tackle world record for Atlantic Blue Marlin, which currently stands at 1,402 pounds, two ounces (set in Brazil 1992).

Below: Completely upgraded and custom built for comfort, performance, and safety, the 115 foot mothership Madam _and the 61 foot Carolina-built Blackwell sportfisher Wild Hooker _are purpose built to travel to remote locations where fuel and supplies are scarce. These fine vessels are what many sportsmans dreams are made of, and represent the ultimate pinnacle of offshore sportfishing. 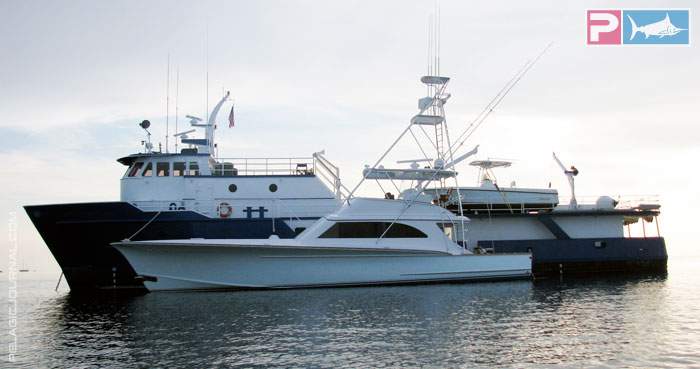 Below: Ascension is a tiny British island in the middle of nowhere in the Atlantic Ocean. It is located 1,450 miles east of Brazil, and approximatley 1,800 miles northwest of Angola, Africa. With a tiny land mass of only 34 square miles, Ascension Island is actually the peak of a huge underwater mountain that rises over 13,000 feet above the sea floor. With a "high spot" like that, its no wonder the place has a reputation for attracting large pelagic predators. 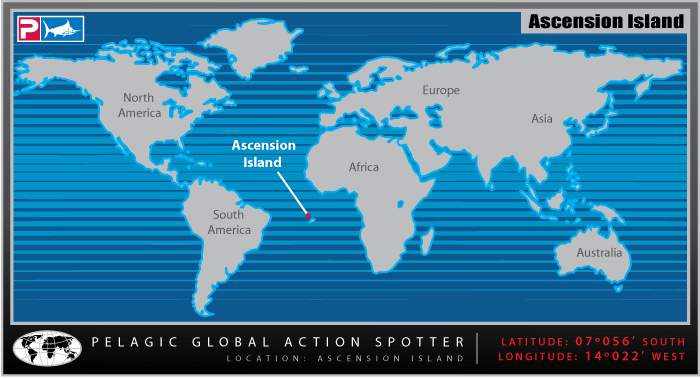 Below: Ascension Island as seen from the air, certainly looks like a fishermans paradise. 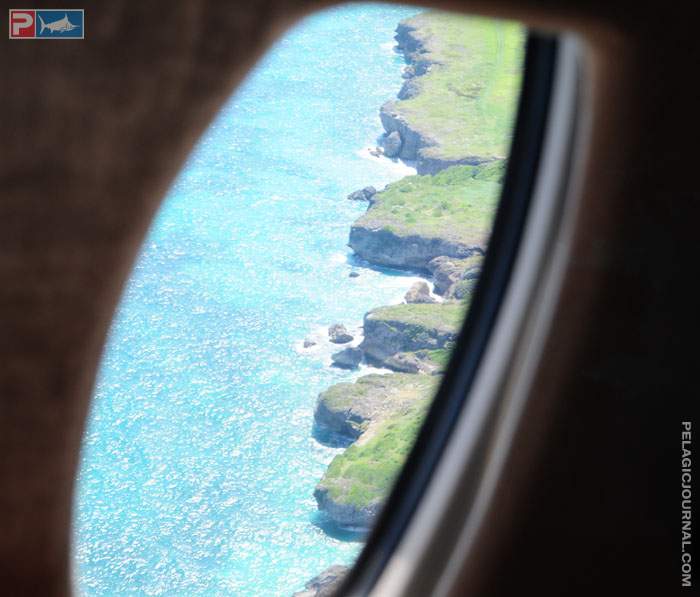 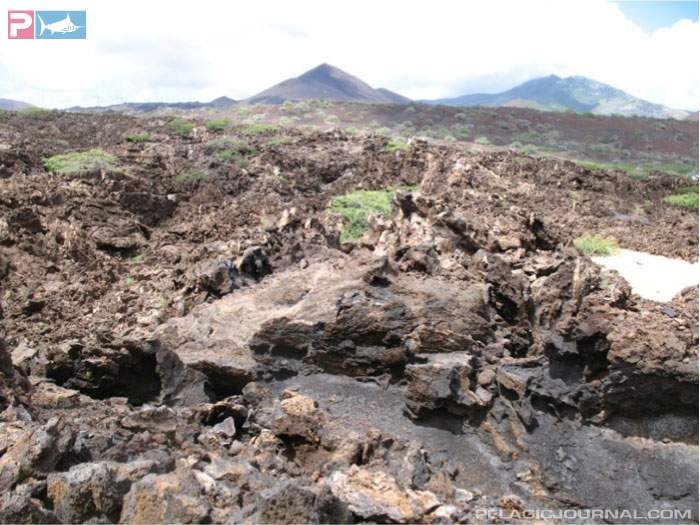 Hensley reports on Ascension: "We had excellent blue marlin fishing, with over a dozen large blue marlin released, and one weighed in at 1,213 pounds. The angler was Allen Stuart, and the boat was captained by Oskie Rice." He added, "In addition to the epic marlin fishing, we had daily catches of yellowfin tuna from 200 to 250 pounds. Our next stop is Brazil, where the bite is currently red hot..."

Below: 1,213 solid reasons to celebrate. 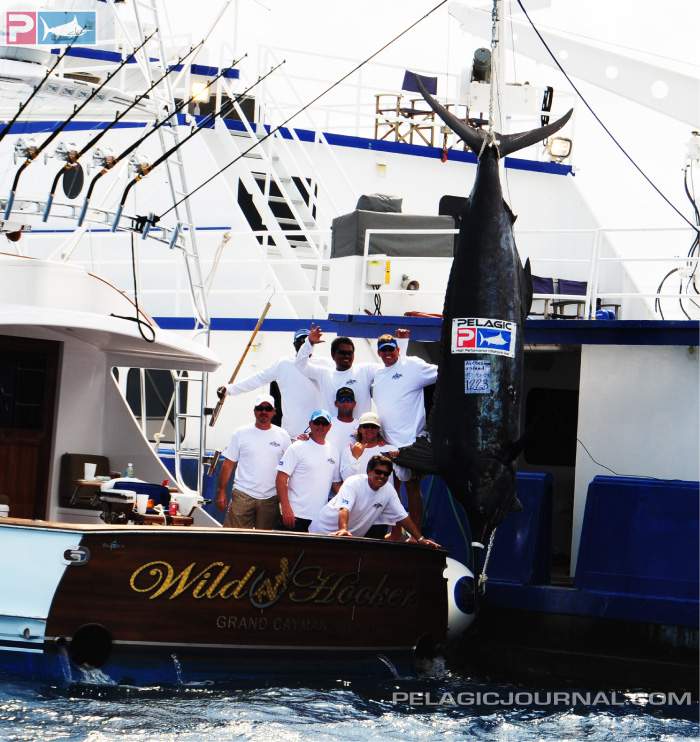 Below: Owner/Angler Alan Stuart (right front) with a 1,213 pound blue marlin he caught at Ascension Island aboard the _ Wild Hooker _with PELAGIC Pro Team Captain Oskie Rice at the helm. 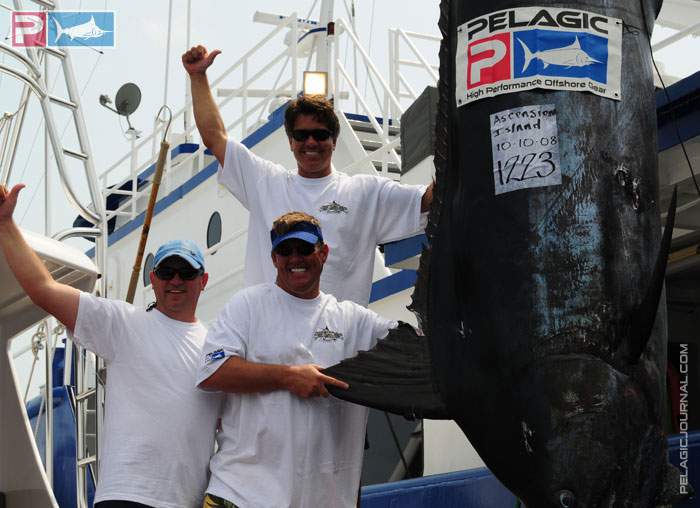 (Note: the fish was weighed initially on the boat at 1,223 pounds (hence the sign in the photo) but was subsequently weighed on land to receive a more accurate and officially certfied weight of 1,213 pounds.) 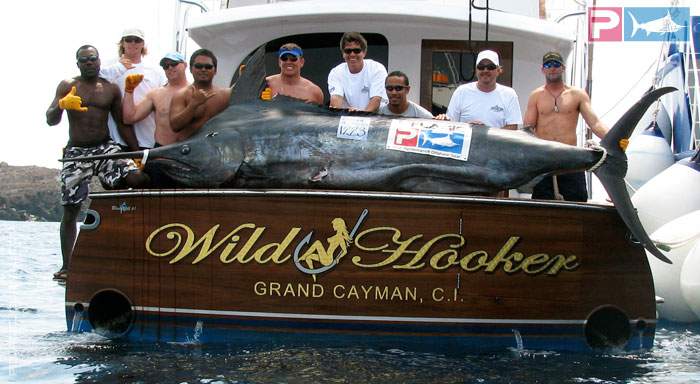 Below: PELAGIC Pro Team Captain Oskie Rice is no stranger to these waters, he weighed a 1,337 pounder at Ascension several years ago. 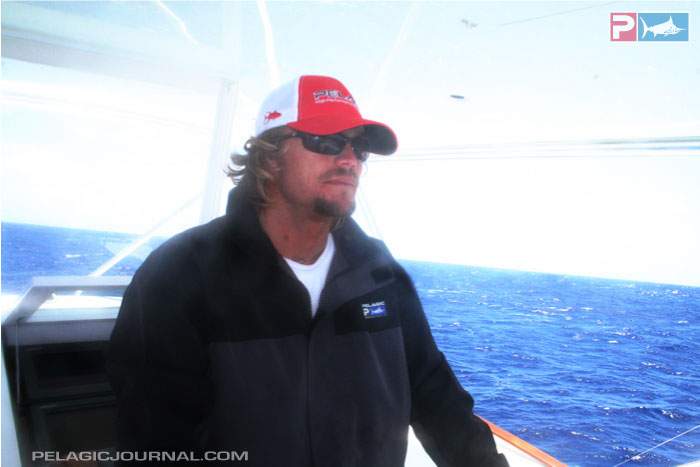 Below: PELAGIC Pro Team Captain Clay Hensley (left) and Frank Kokolegba (right) are all smiles while waiting for a bite at Ascension. 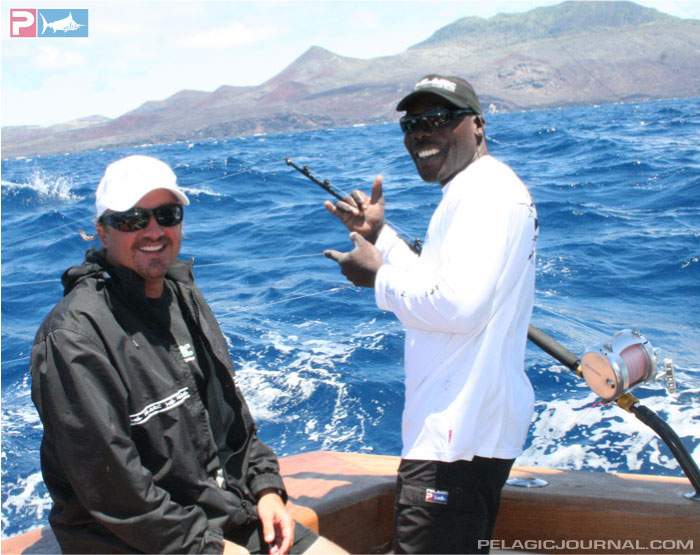 Below: A 61 foot Blackwell Sportfishing Yacht, the _ Wild Hooker _is just about as good as it gets. 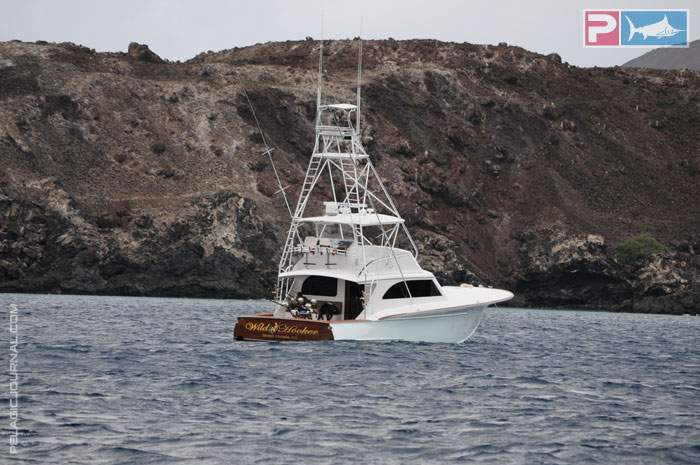 The tuna were thick out there at Ascension Island, with a daily dose of large yellowfin tuna ranging from 200 to 300 pounds. Lets take a look at some of the highlights in the sashimi department...

Below: PELAGIC Pro Team Frank Kokolegba is a master on the wire, making quick work of this giant yellowfin tuna. 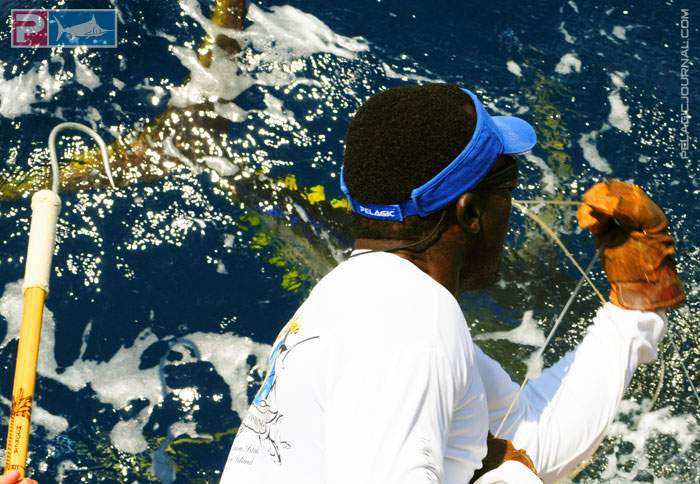 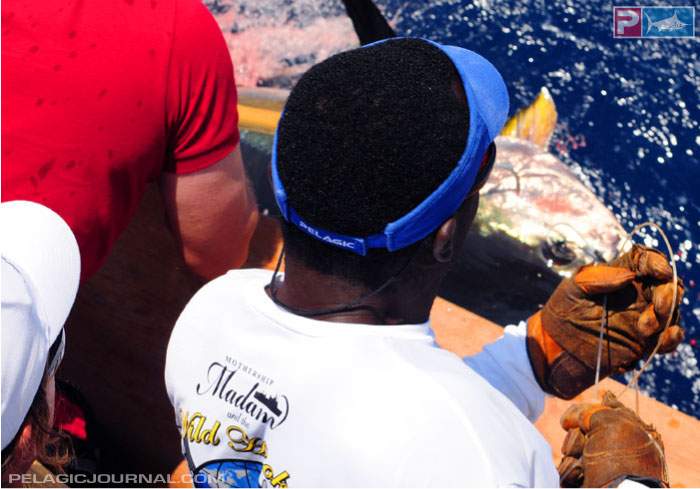 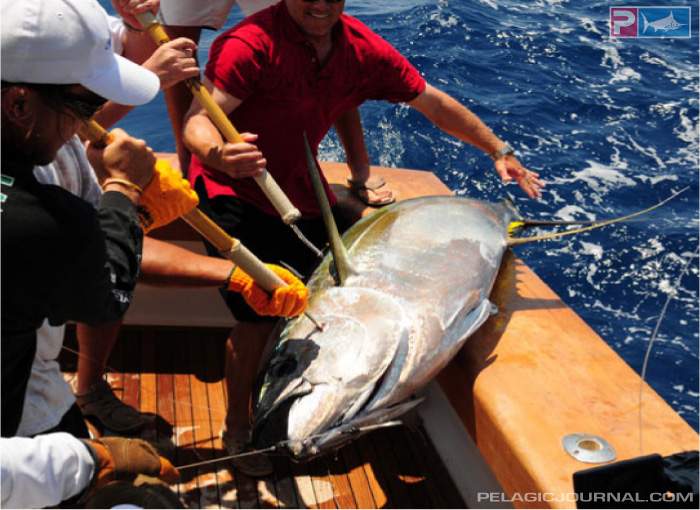 Below: PELAGIC Pro Team Captain Al Roper on the wire at Ascension. 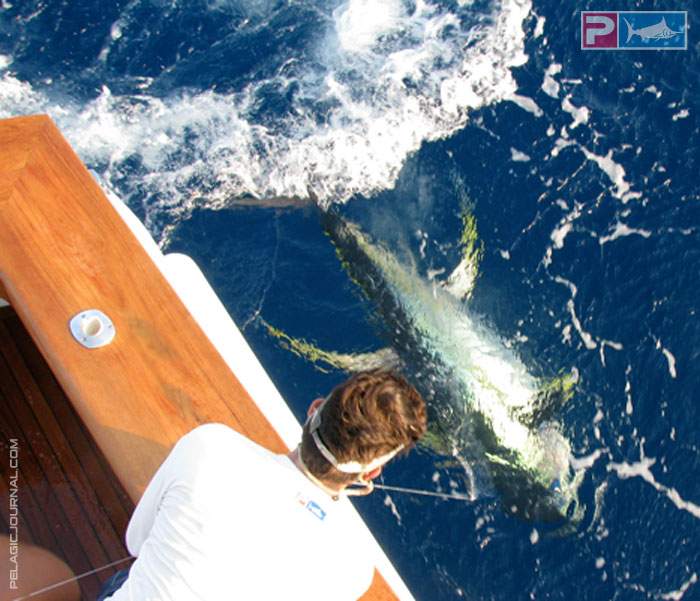 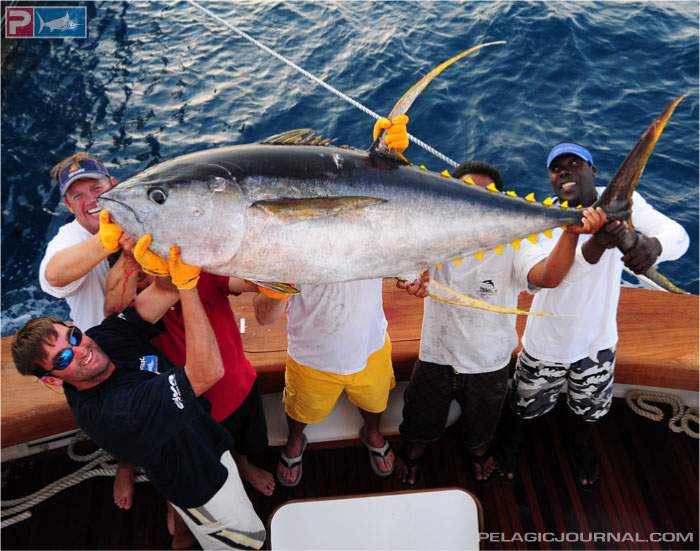 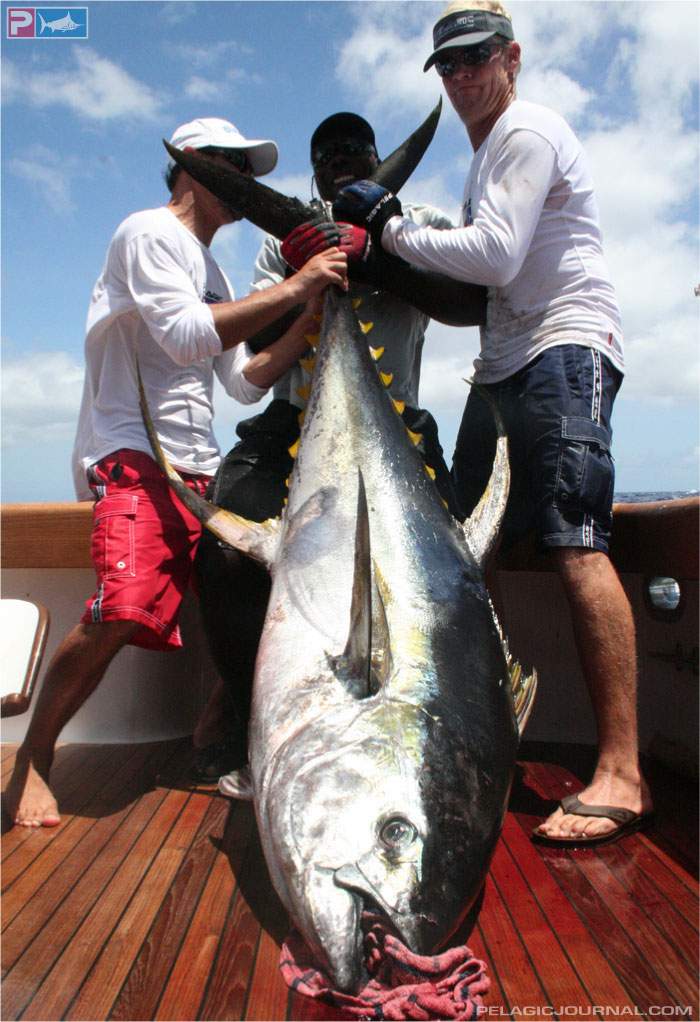 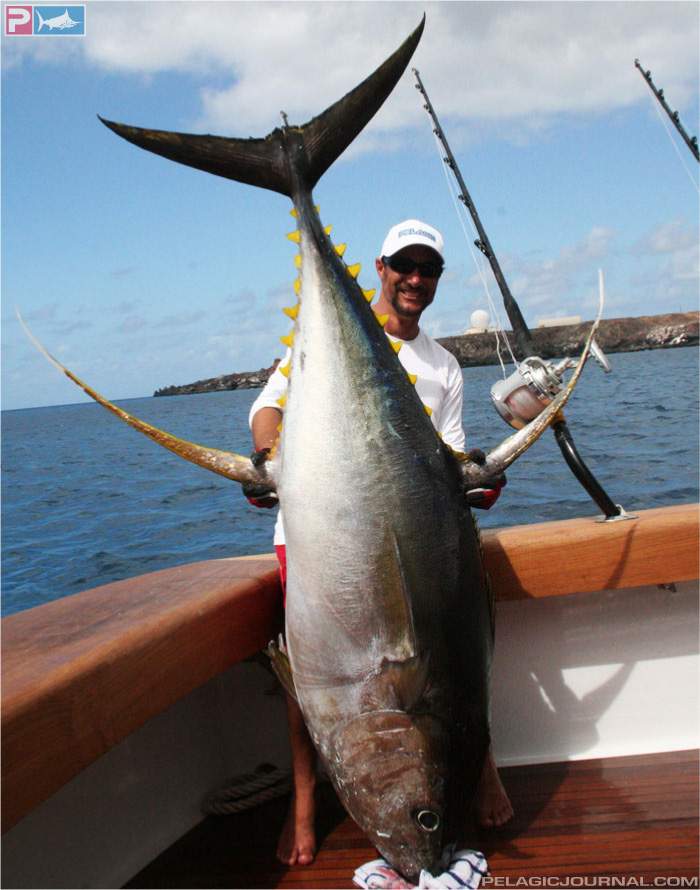 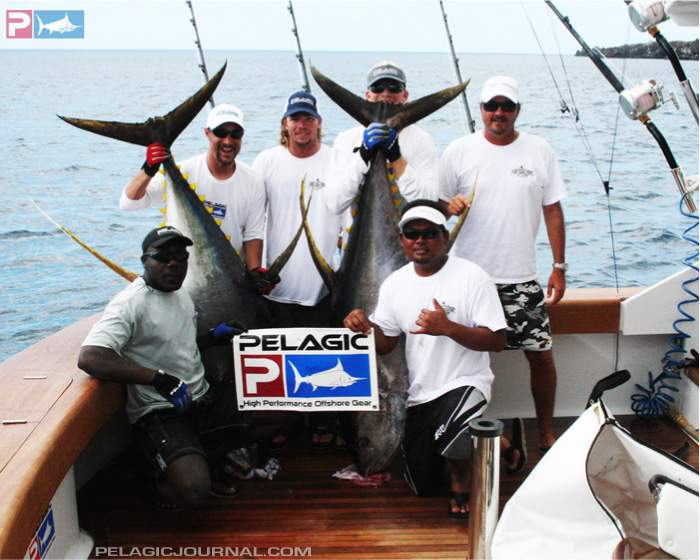 It is no small feat, to take a 115 foot mothership and 61 foot sportfishing yacht around the world accross the oceans and to remote locations. The journey one undertakes when attempting to travel the globe in search of blue marlin can be downright monumental in terms of logistics, planning, and seamanship... In the latest edition of The Journal , PELAGIC Pro Team Captain Al Roper checks in with a photo report that gives us a rare glimpse of the Mothership Madam, which is certainly a beatifully appointed long range vessel. We also get to see some incredible imagery from the crews amazing journey from Brazil to Ascension Island. Lets take a look...

Below: The Mothership Madam , with Captain Al Roper at the helm. 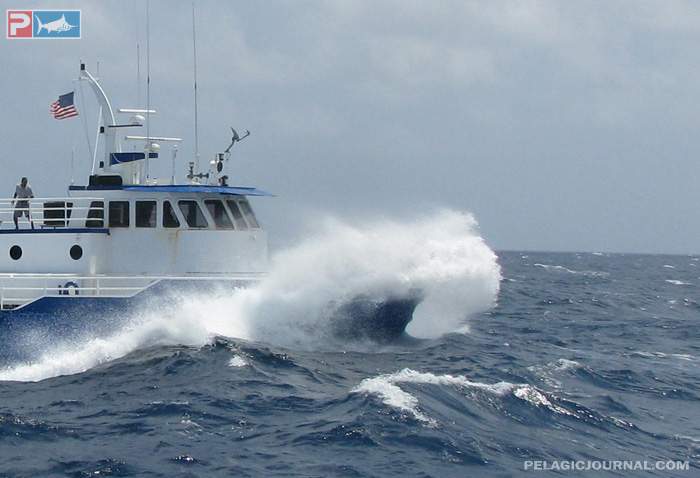 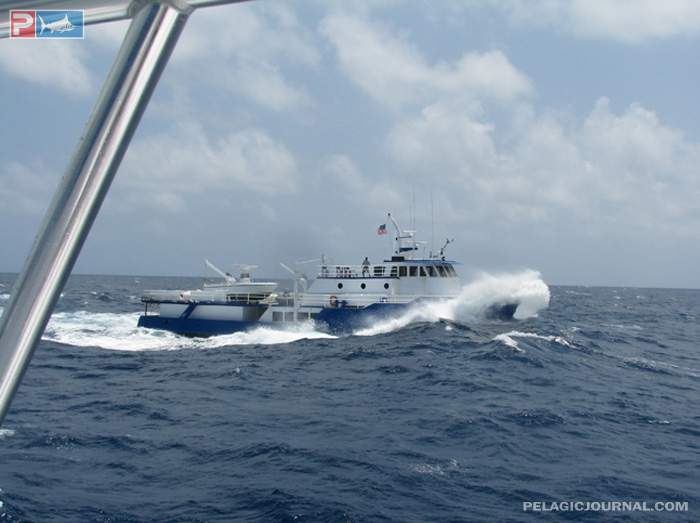 Below: The Mothership Madam _and sportfisher Wild Hooker _, in a quiet cove in Brazil, where the rainforest meets the sea. 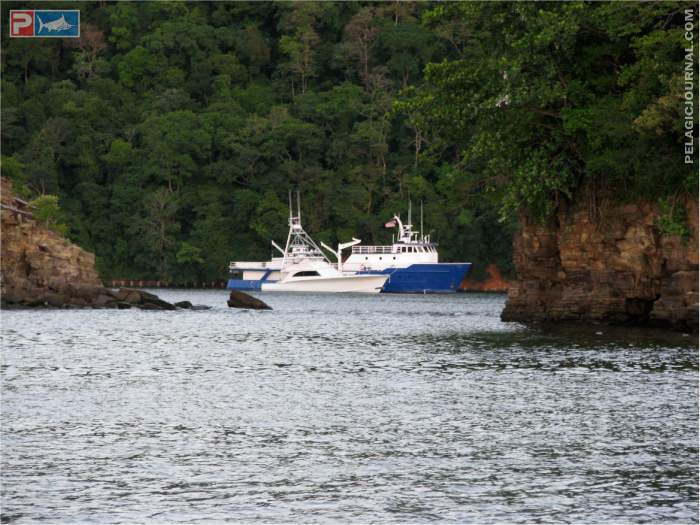 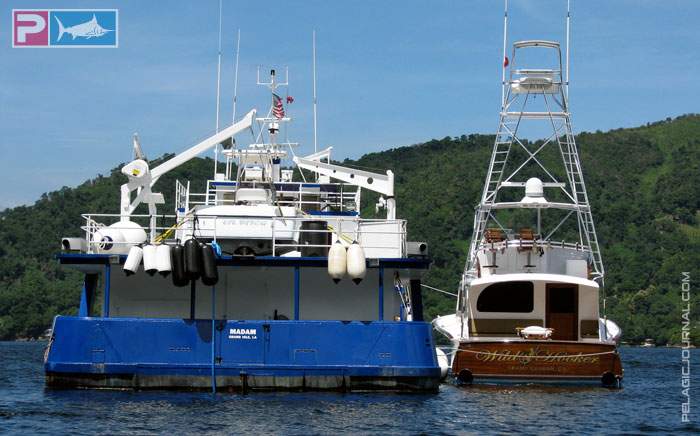 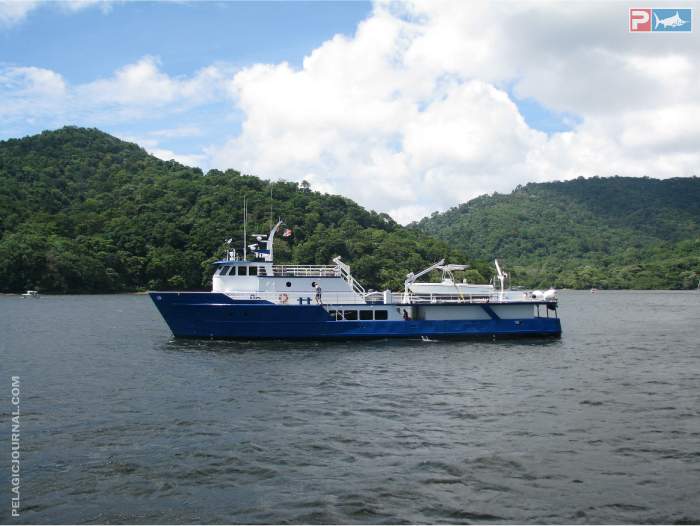 Below: The journey from Brazil to Ascension was over 1400 miles... sometimes the seas were flat. 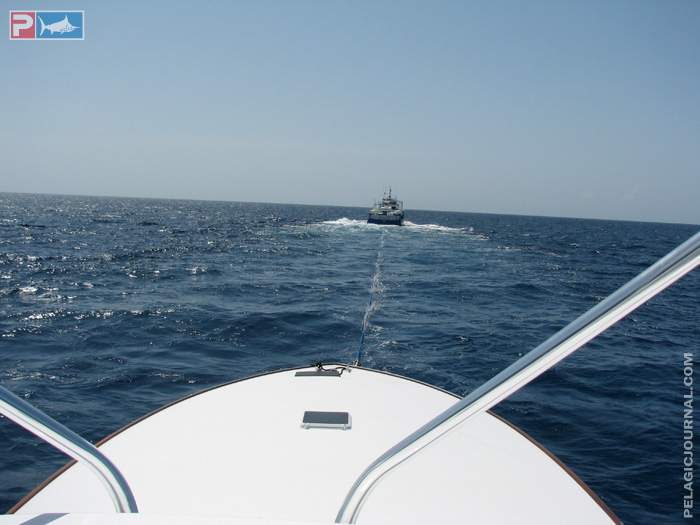 Below: Sometimes the seas were rough, here we have PELAGIC Pro Team Captain Oskie Rice and Bronson Cablet getting tossed around while being towed in snotty sea conditions. Said Oskie, "Rough... no, that was nothing." 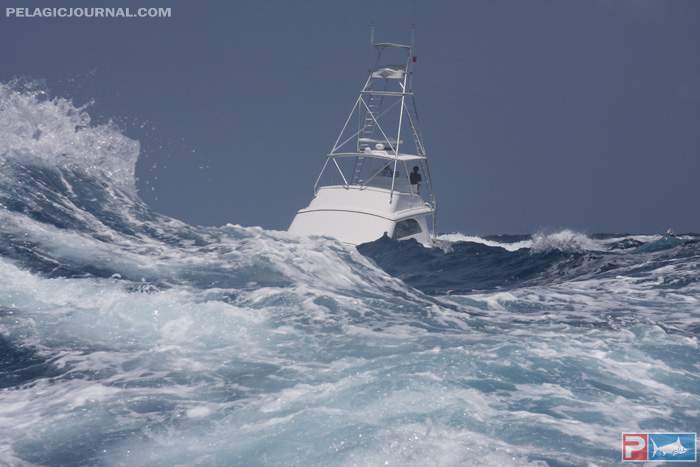 Below: After the long journey of 14 days and nights alone at sea, the Madam & Wild Hooker made it safely to Ascension Island, arriving just before sunset. 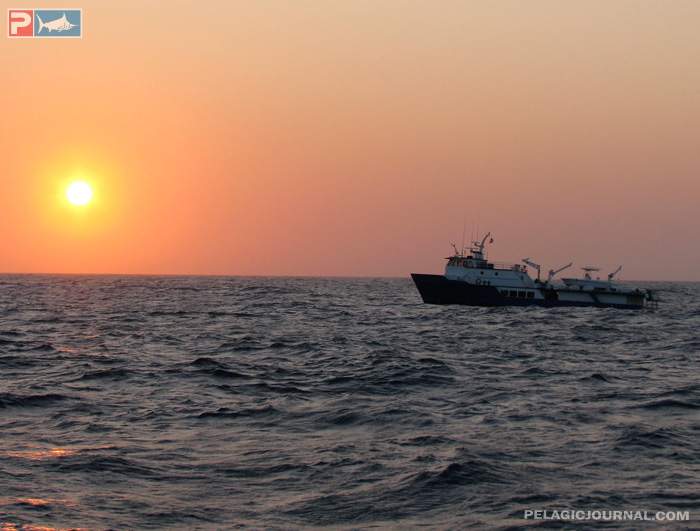 Below: Arriving at sunset, the guys decided to put the lines out and start fishing... 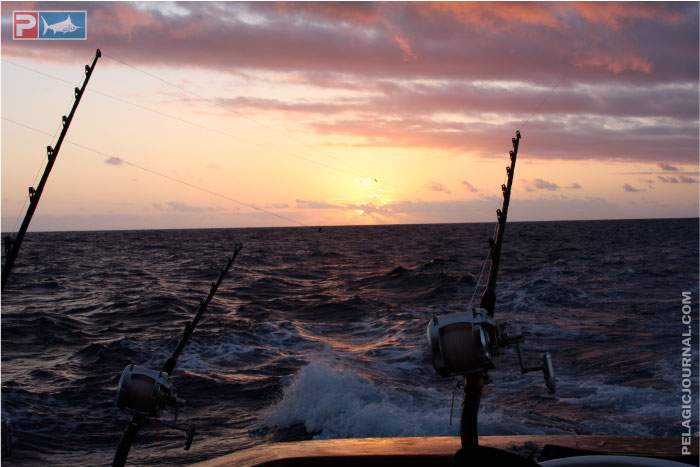 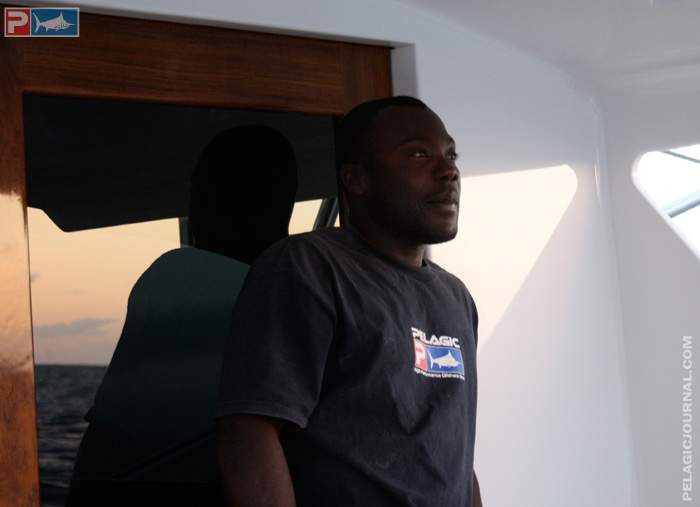 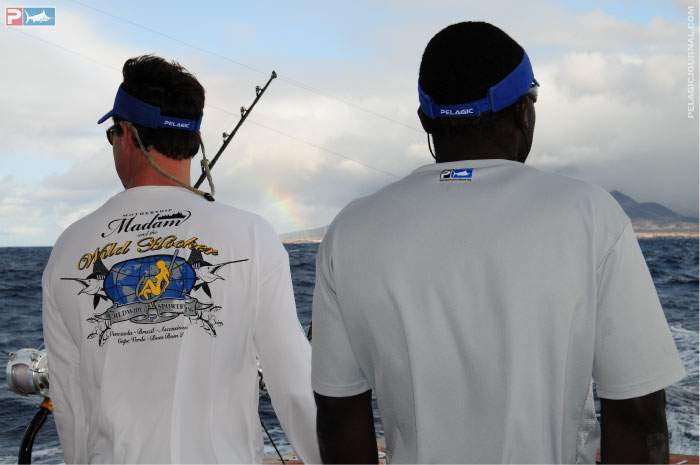