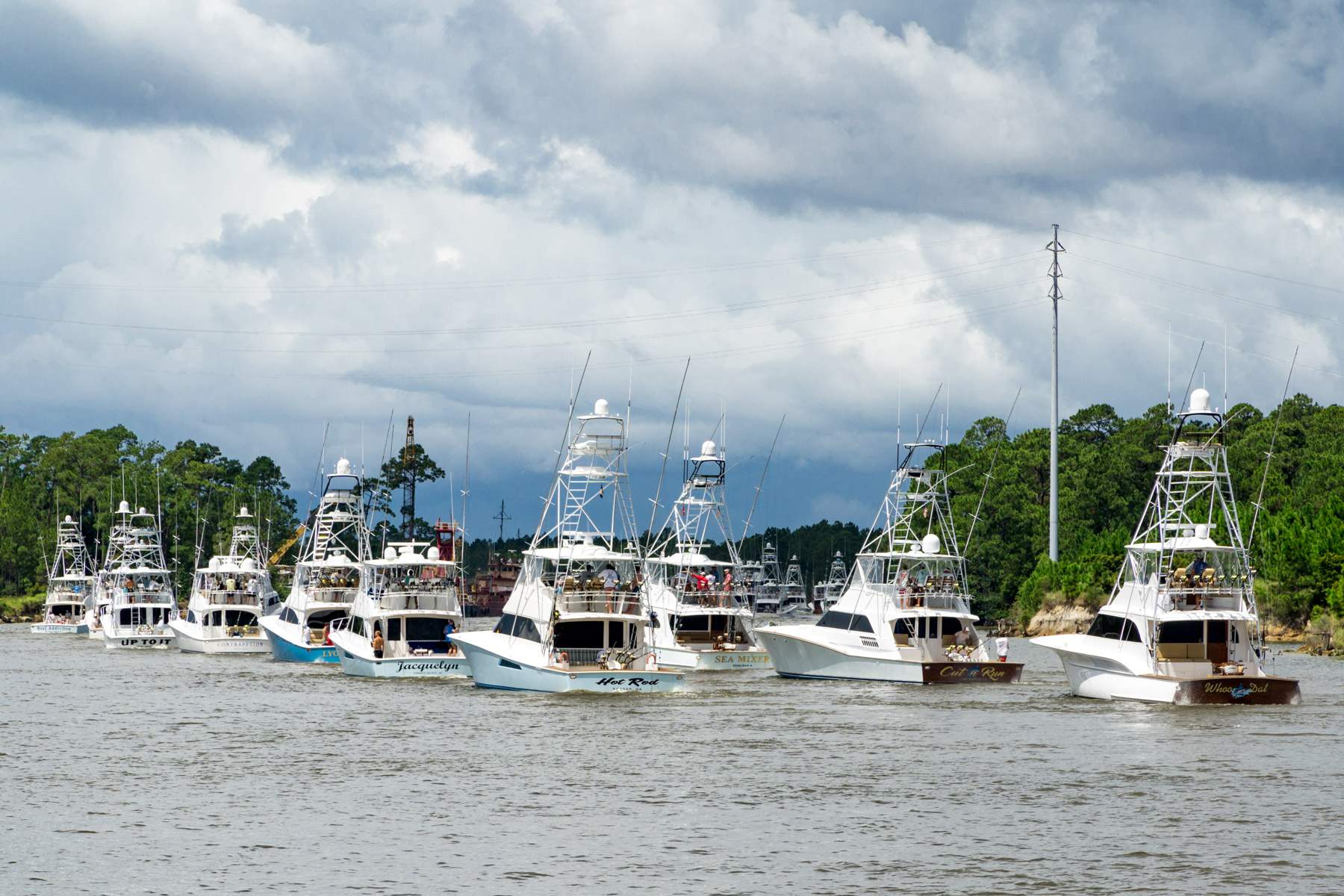 And They're off! The 2017 Blue Marlin Grand Championship 11:00am Boat Fleet Departure

The 6th Annual 2017 Blue Marlin Grand Championships went off again in Orange Beach, Alabama July 11-16, 2017, with a record $1.55 Million overall purse. We were excited to once again be on the scene as the Official Outfitter for the event, and thoroughly enjoyed our time from Tuesday night’s Crew Party to the Miss Billfish USA Competition to the final weigh-ins on Saturday night. All in all, 4 Blue Marlin were brought to the scales with Chasin’ Tail , a beautiful 80-foot Weaver, taking the crown and $460,845 for their 502.0-pound fish.

Below: Twas the night before the greatest show in Sportfishing. 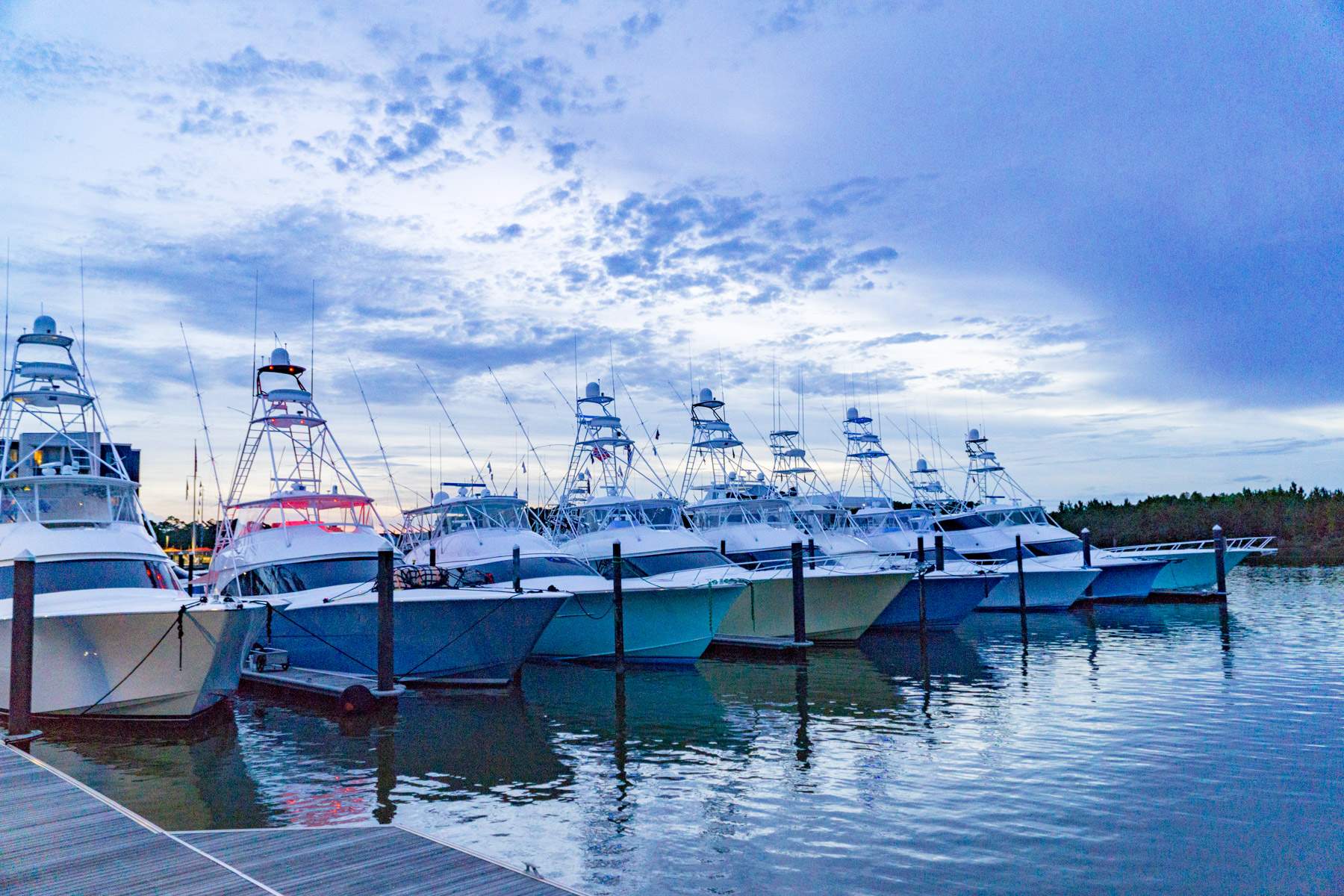 Below: The docks were buzzing prior to the fleets 11:00am departure. 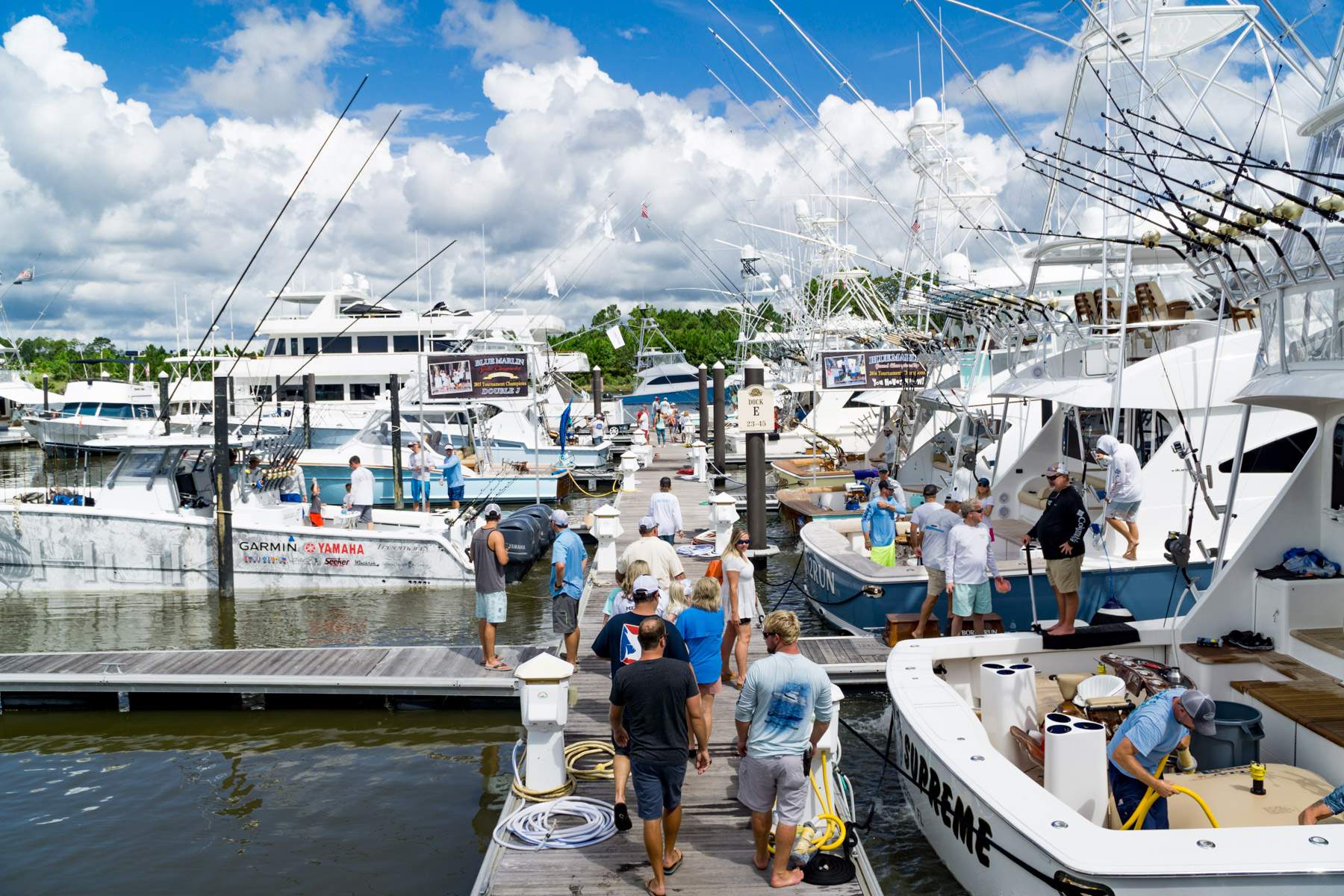 Below: The lovely ladies of the 2017 Miss Billfish Bikini Competiton. 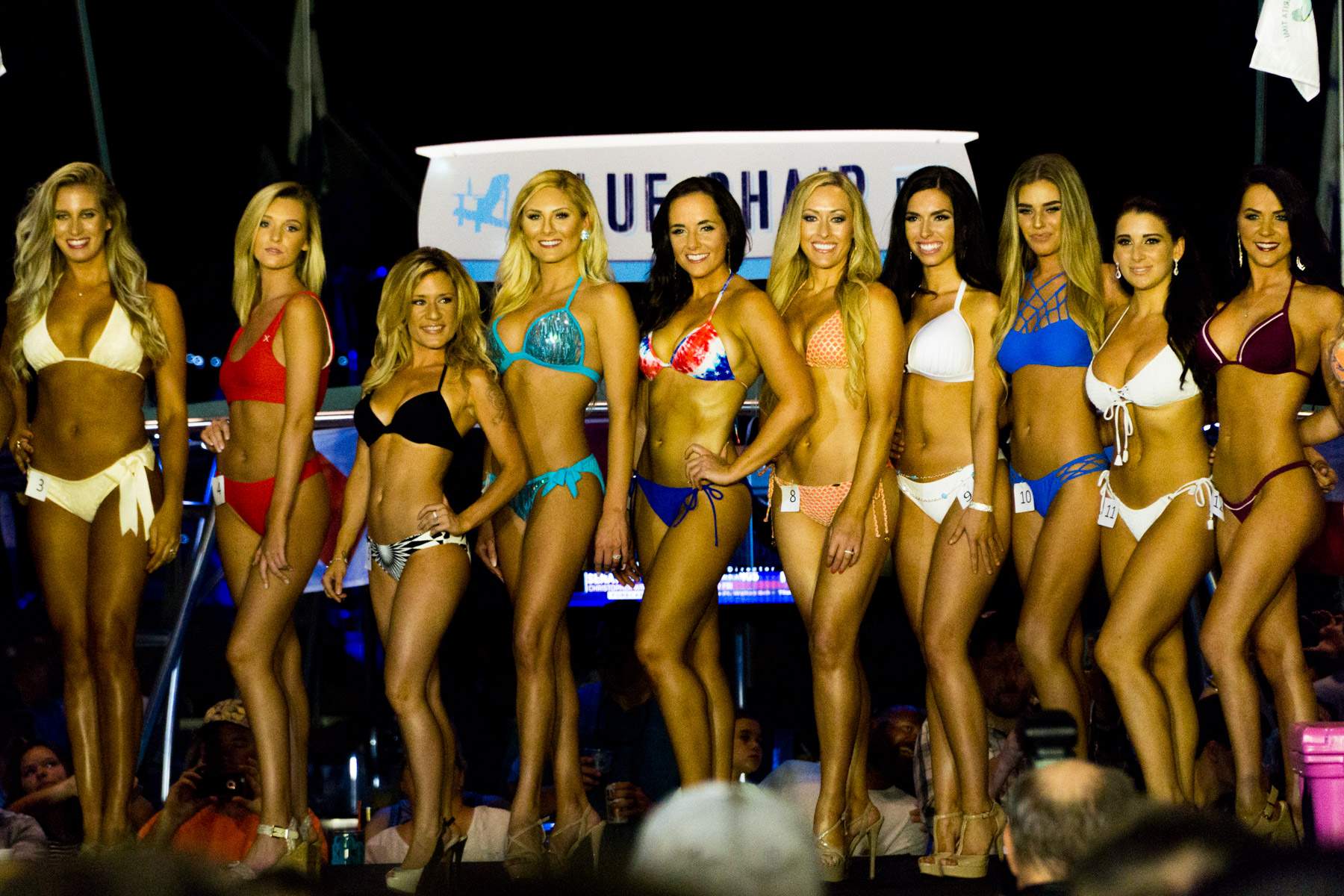 While many tournament participants and sponsors had been at The Wharf in Orange Beach for a few days, it's the Annual Miss Billfish bikini competition that officially kicks off the tournament for the public. As you'd expect, large crowds gathered to see the 14 beautiful contestants battle it out on the catwalk. No doubt, it was a close call and tough decision for the judges, but in the end it was Chanel Cegielski who was crowned Miss Billfish 2017.

Below: Congratulations to Miss Billfish 2017, the lovely Chanel Cegielski! 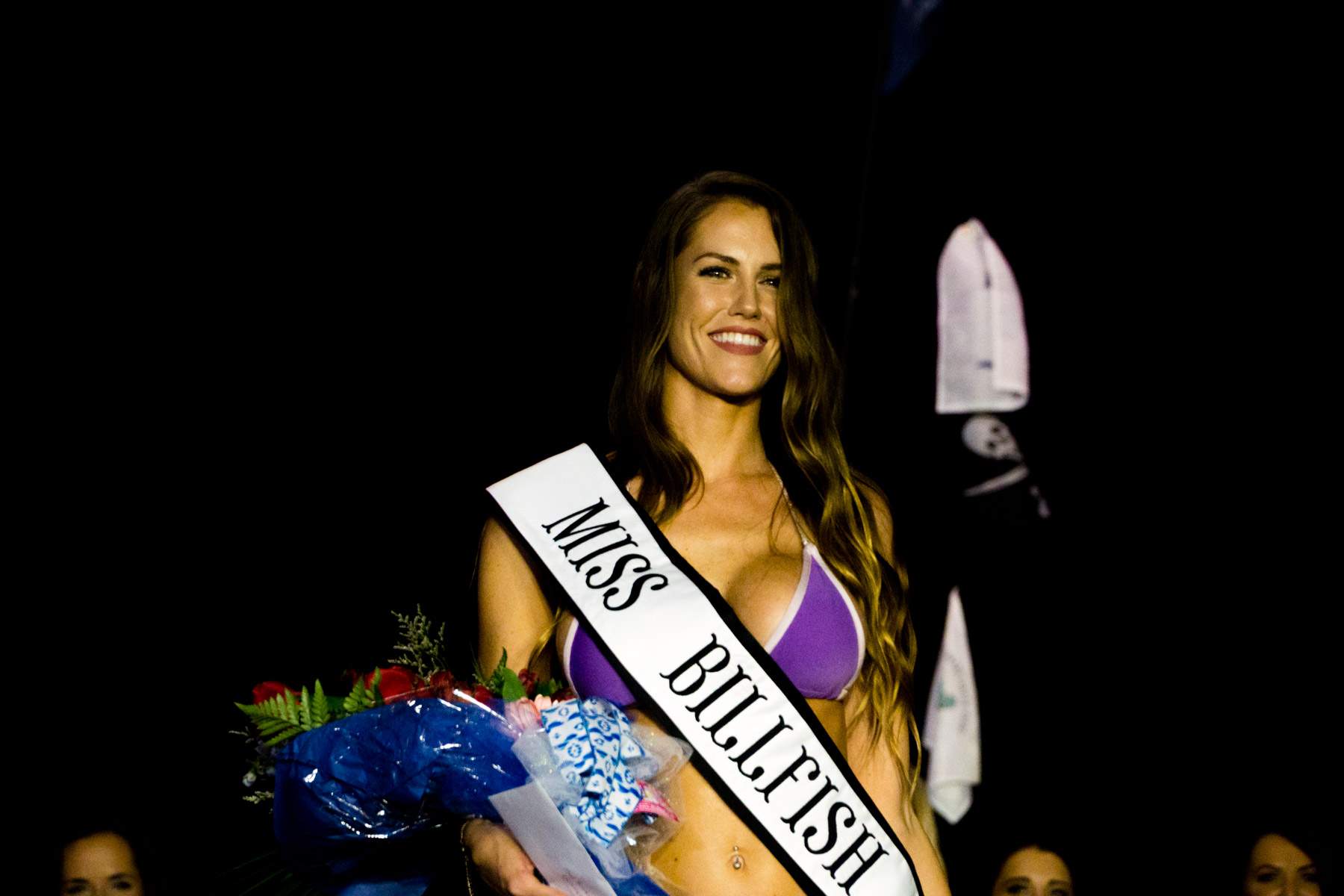 Below: A lucky junior angler taking on Miss Billfish in the Fighting Chair Contest. 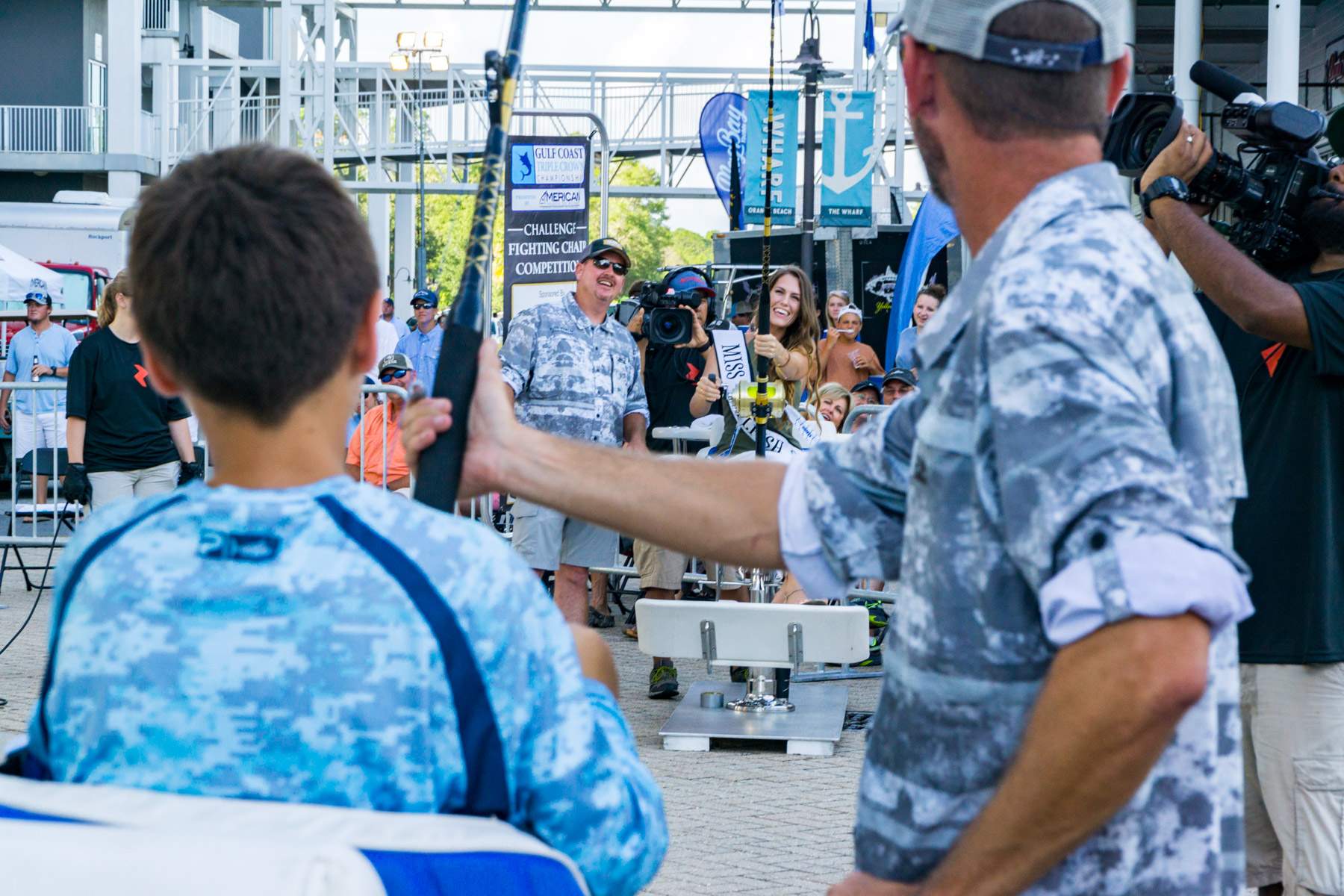 With only one fish weighed on Friday, a first ever 7:00am call time featuring a 437.6-pound blue caught by 14-year old Ryan Cooper aboard the CE , it paved the way for a busy and exciting Saturday finish. By the end of the night, 3 more blue marlin where brougt to the scales, including a 466.4-pounder from the Rascal owned by Harris Morrissette and run by Capt. Nick Milsap.

Below: A 466.4-pounder caught by Bonner Williams and his team mates aboard Rascal. 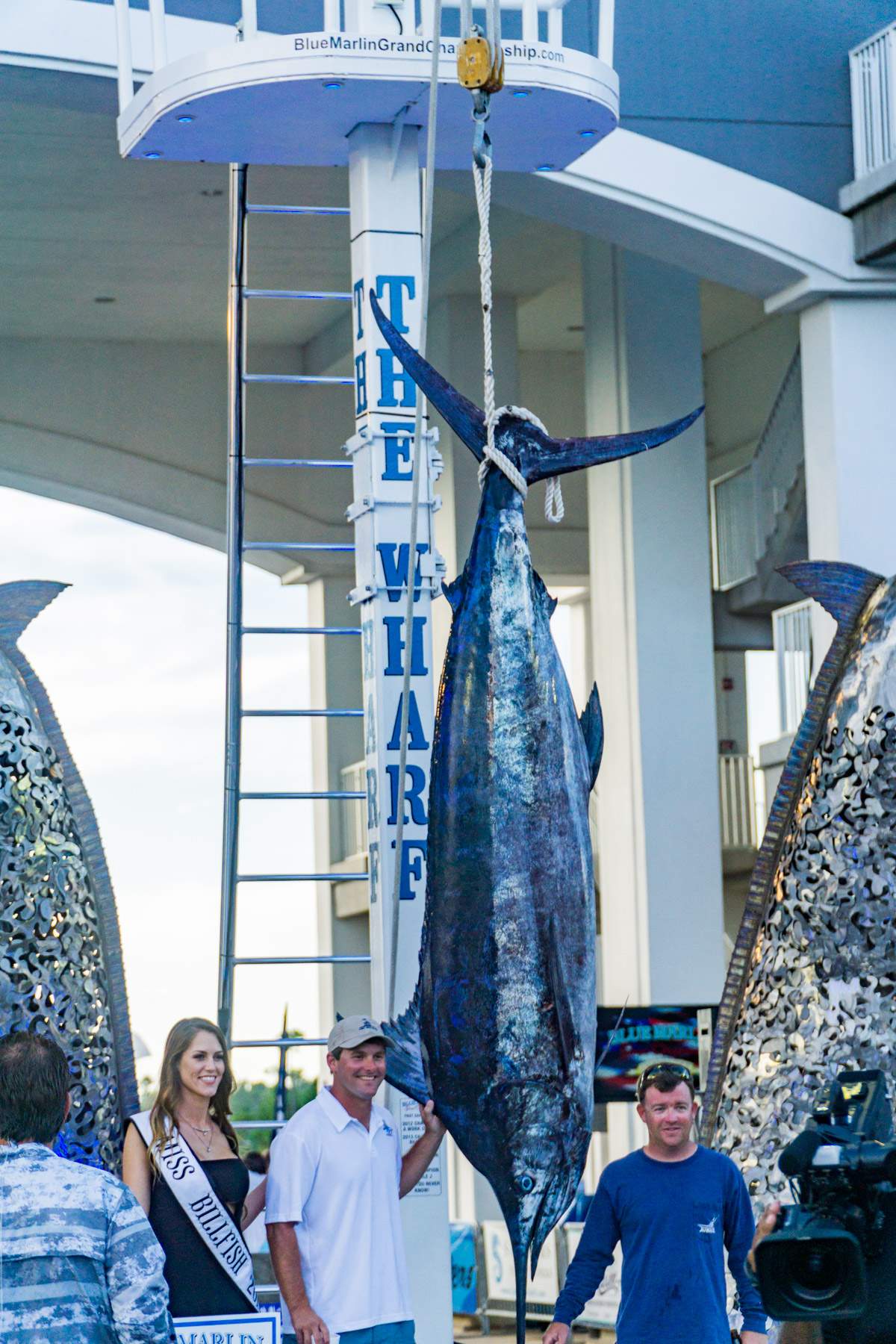 Below: No shortage of sportfishing fans at the 2017 Blue Marlin Grand Championship 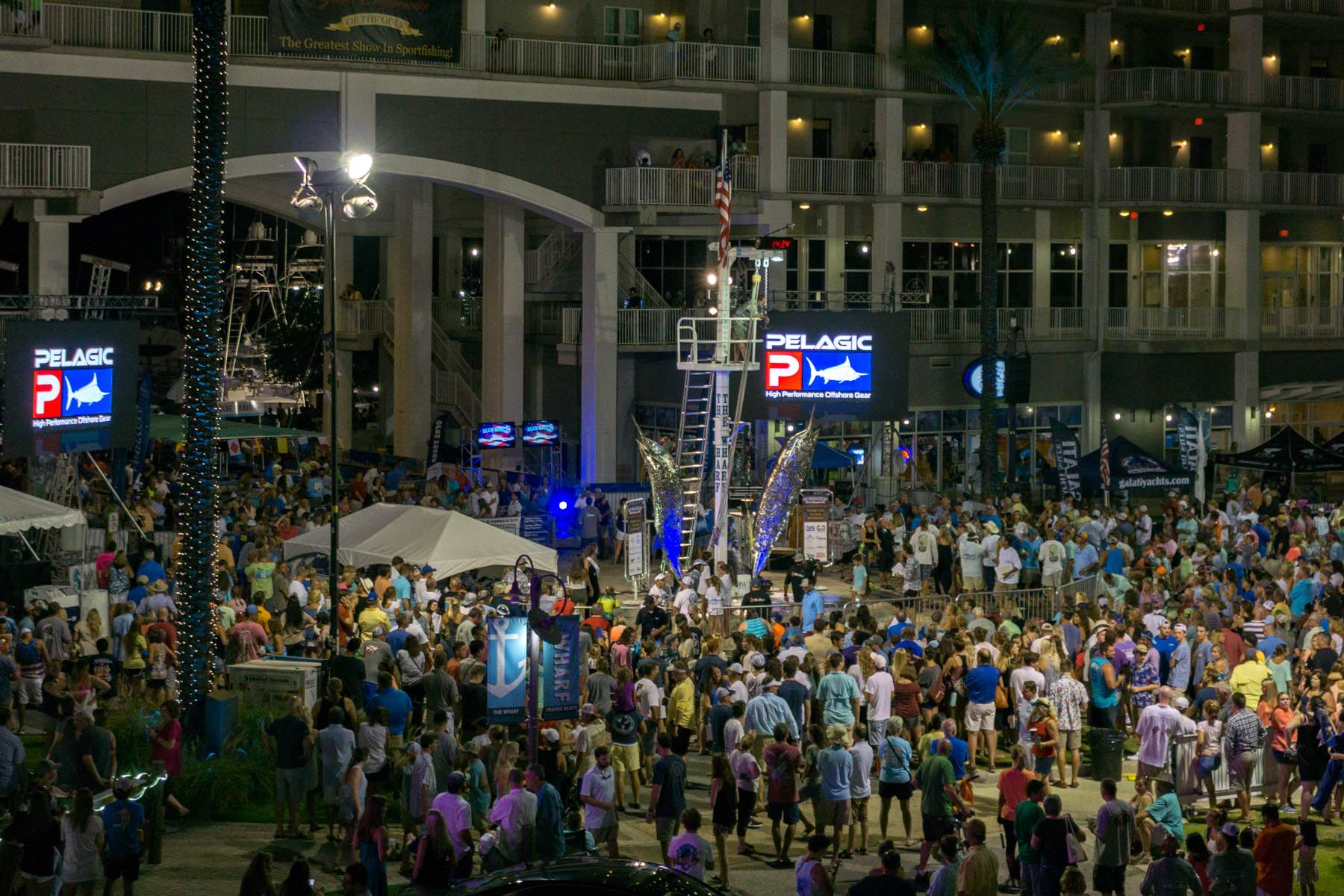 Below: Congratulations to the 2017 Blue Marlin Grand Champion, Chasin' Tail!

Below: Congratulations to all the winners! 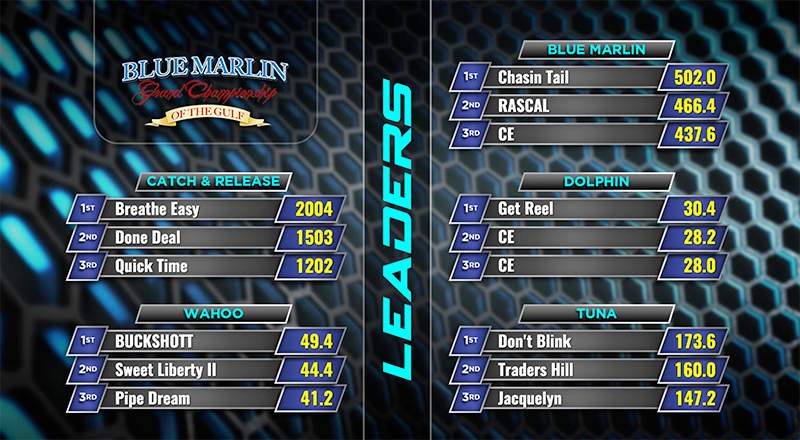 All said in done, the 2017 Blue Marlin Grand Championship truly was one of the greatest shows in sportfishing. The entire production from the the bikini contest to the massive fish being brought to the scales, is a sight to behold. We'd like to thank our retail partner, The Wharf Marina Outfitters Store , for working with us durning the event and keeping everybody in Orange Beach dialed in with Pelagic Gear!

Below: The Pelagic Merchandise Tent was up and running throughout the event. 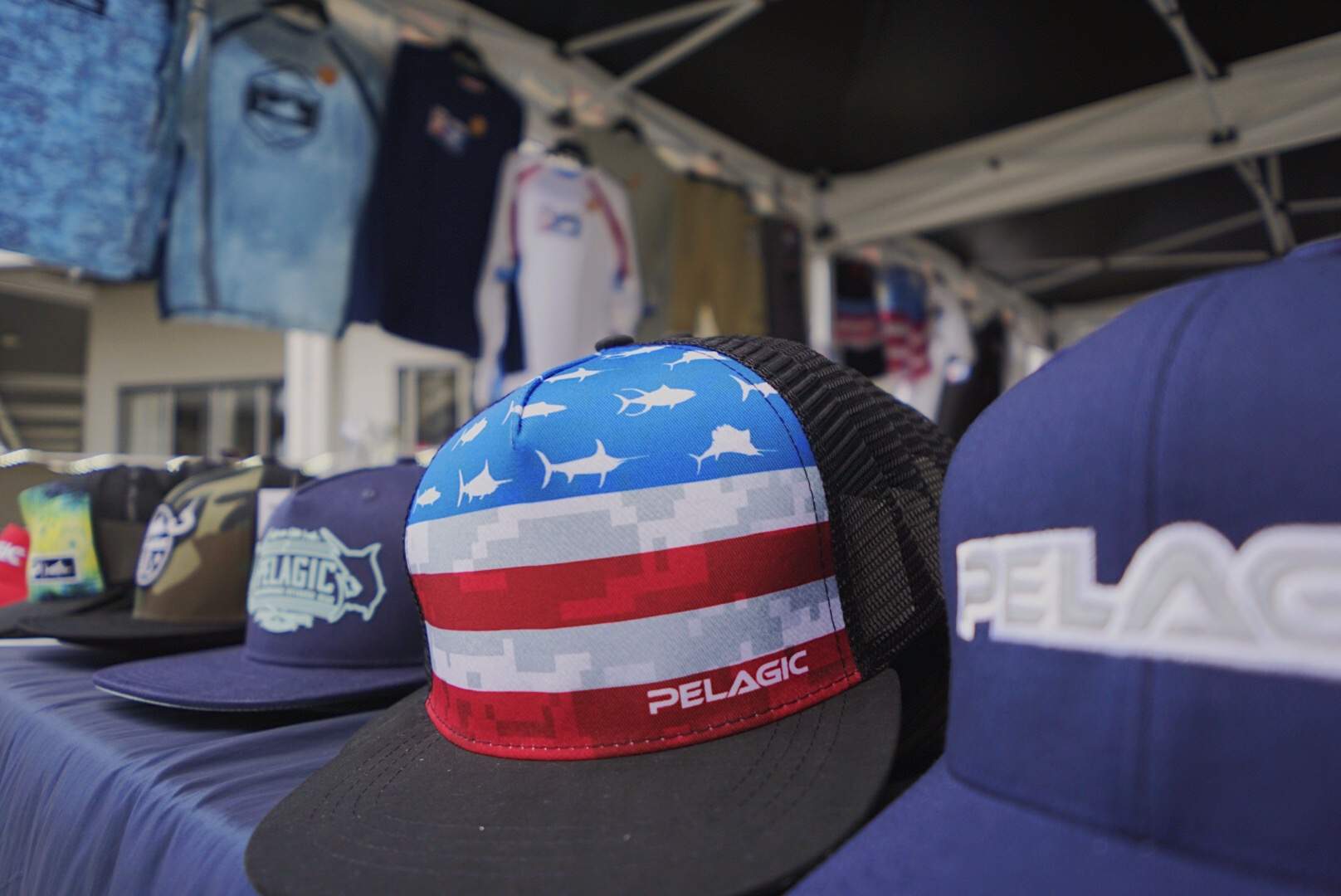 Below: When in Orange Beach visit The Wharf Marina Outfitters Store for the largest selection of Pelagic Gear in the area. 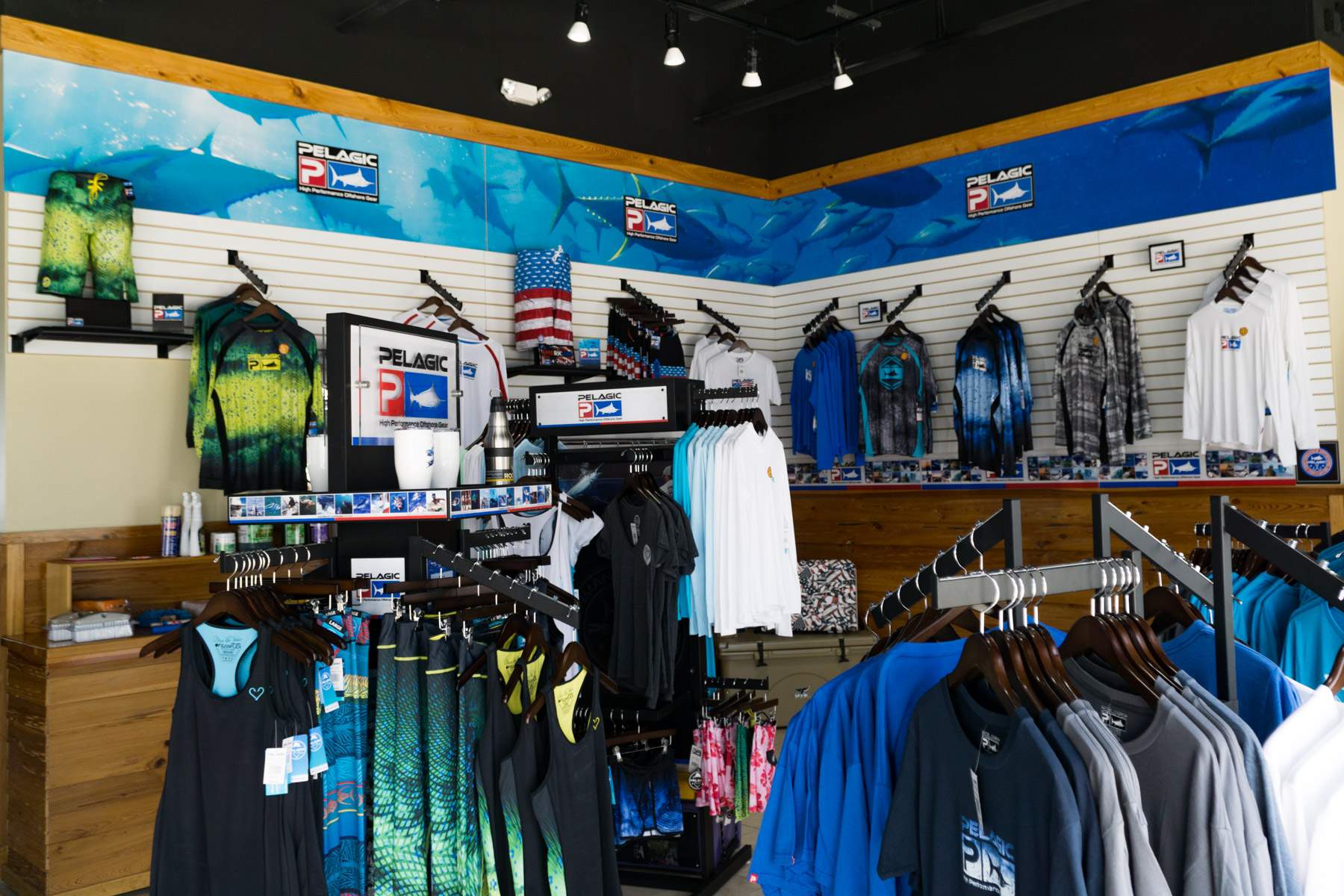