It takes confidence to bet heavily when the stakes are so high. Yet that’s exactly what Team Tranquilo did this past week during the 35th edition of the Bisbee’s Black & Blue Marlin Tournament. The first-time crew from Costa Rica parlayed a hot streak with a hunch and the move paid off in record fashion. Tranquilo earned $2,511,462, the second-highest single team payout in Black & Blue history, with a blue marlin weighing 327 pounds. That fish was good for third place overall, sweeping all but one optional jackpots on the first day. Michael Moretti was the angler, with Captain Victor Julio Lopez at the helm of the 57-foot Spencer. 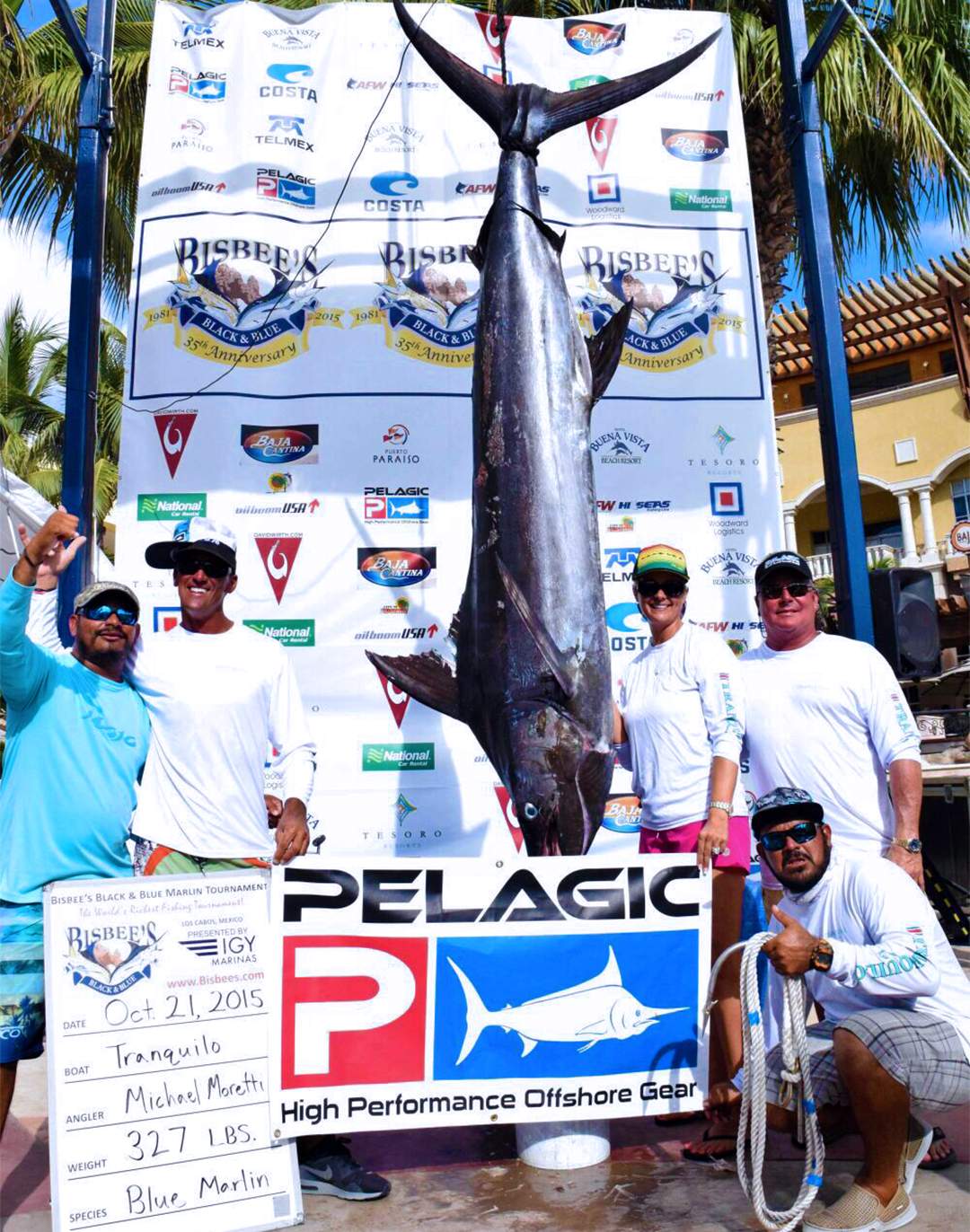 “This is the best third-place finish ever. It really means a lot, coming from Costa Rica with the boat and the team,” Moretti explains. “The competition here is the best in the world. It’s a different style than what we’re used to, but it’s very tough. The whole experience has been top notch and we’re already making plans to fish the Black & Blue again next year.”

Moretti & Company are coming off a first-place win in the Bisbee’s Los Cabos Offshore Tournament earlier this month. A 399-pound black marlin then earned Tranquilo $460,200, another tournament record, for a combined payout of $2,971,662 for the two events. The team caught a Pacific slam consisting of a black and blue marlin, a striped marlin and sailfish during the two contests. Both marlin were fooled by the same green/black plunger lure.

The international flavor of 2015 continued with a Canadian contingent from Thunder Bay, Ontario. Team Catching A Buzz, led by angler Tyler Squire, caught the heaviest fish of the week. The 500-pound blue marlin, Squire’s largest, earned the buddy team a check for $356,225. The awards included first-place team and jackpot, first-place captain and crew and the $1,000 daily for Day Three. Carlos Dominguez guided the team to the victory aboard the charter boat Rondinella. 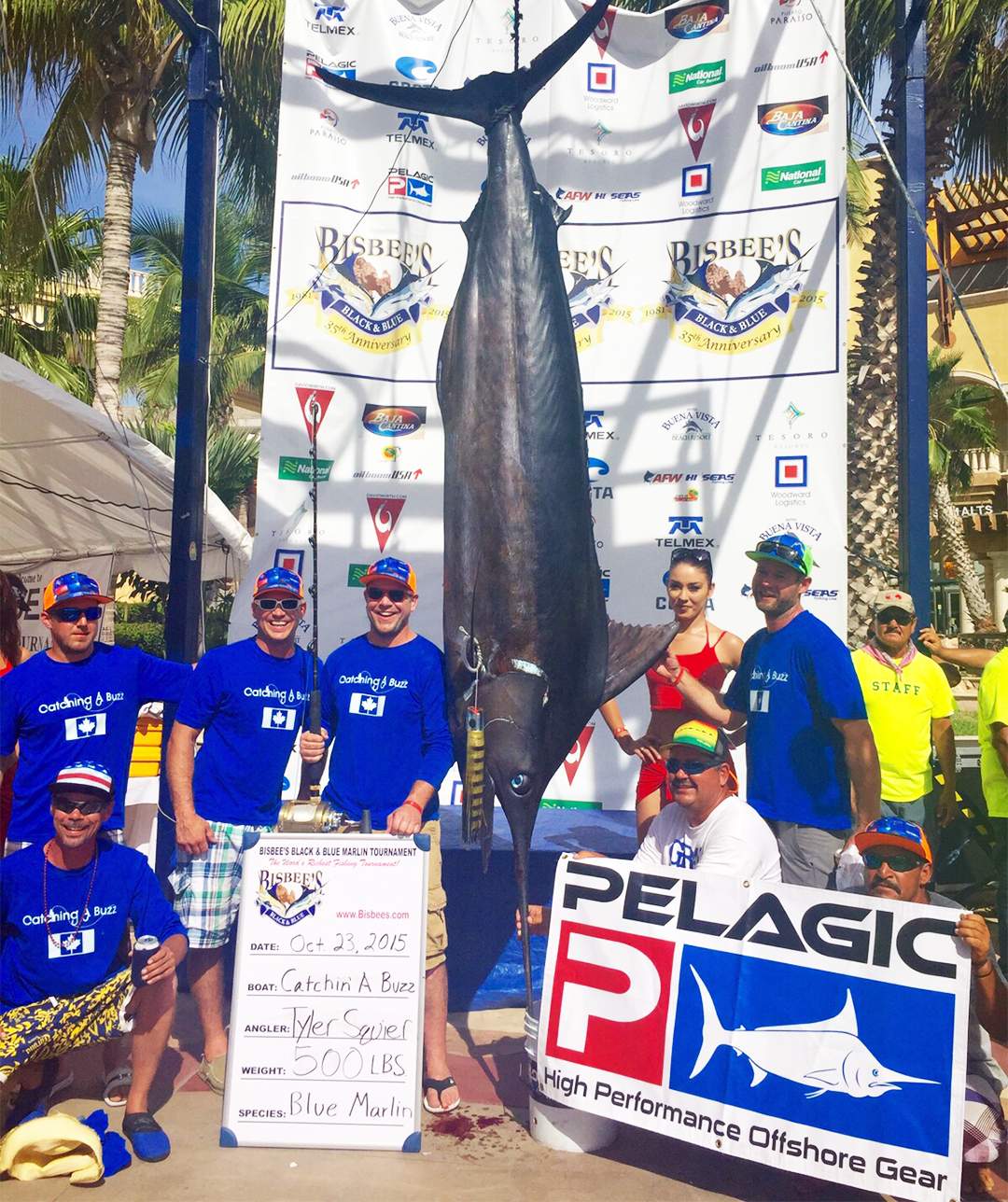 Five More Minutes, another buddy team from Texas, is taking home $156,937 after landing a 356-pound blue marlin, also on the first day of fishing. The team won second-place honors and the $1,000 Daily with that catch. Jave Abaroa was the skipper of Whata Journey.

In the tight release division, Team Nice Ride came out on top after releasing two blue marlin. Those efforts earned Capt. Tyson Valli and the team a $76,295 payout. Fantasma, with Maricio Wenges at the helm, took second-place honors with two blues released. Fantasma earned $26,392, based on time. Predator, led by Capt. Morgan North, came in third place with a single blue, good for a check totaling $14,662. Only blue and black marlin are eligible in the release division.

One-hundred and twenty-one teams competed in the 35th edition of the Black & Blue, the richest tournament in the sport. A total of 945 anglers fished hard for three days and caught 44 blue marlin and one black. Teams had to contend with a noticeable absence of baitfish due to the warmer El Niño conditions. Squid were prevalent in certain areas, however, and all three winning marlin were caught on lures.

“Congratulations to all our winners,” said Tournament Director Wayne Bisbee right before the customary fireworks show at Saturday’s awards banquet. “Thank you for joining us for our 35th edition, and thanks to all our wonderful sponsors for making this possible. It’s been another one for the history books, and my family and I look forward to welcoming you all back again next year. Bueños noches and safe travels home.”

Pelagic Gear has been the proud clothing sponsor of the Bisbee's Tournaments for 13 consecutive years. During the week of the tournament, the entire town of Cabo is crawling with fishing folk and nearly everyone has a piece of Pelagic Gear on. With the help of the Bisbee's staff and Pelagic Gear, the fishing lifestyle is spreading its' roots and attracting more and more people to this awesome sport we all love.