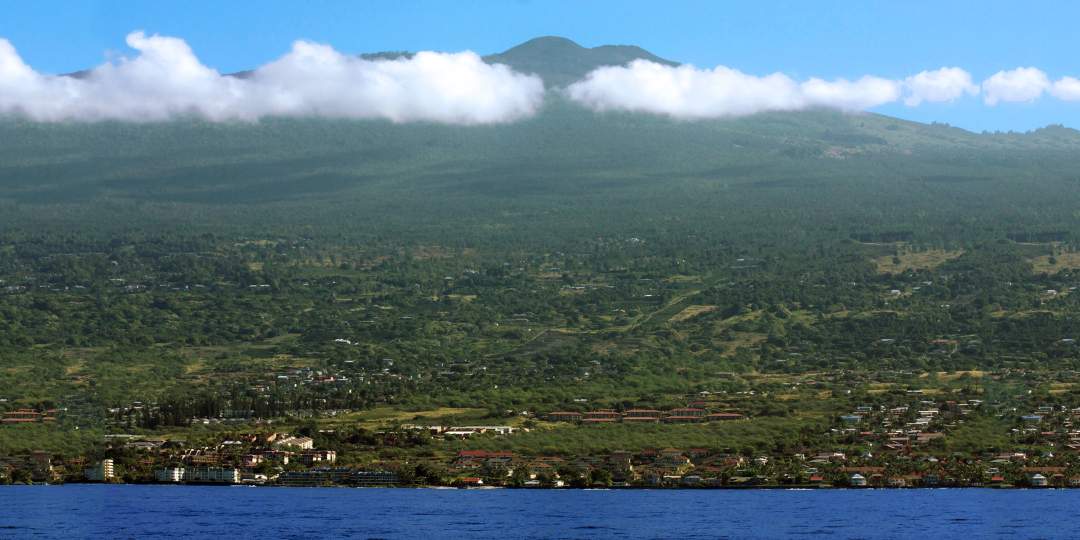 Aloha, this is Capt. Mark Johnston reporting from Kailua Kona, Hawaii. To say the fishing in Hawaii in 2015 has been spectacular would be an understatement. From January through November, the captains and crews fishing the beautiful cerulean waters of Hawaii have produced some of the finest sportfishing catches in the world, especially on the Big Island. Rich in tradition and sportfishing history, Honokohau Harbor in Kona is the heart of the action in Hawaii. Undoubtedly one of the best sportfishing destinations in the world, Kona is home to some of the world’s finest captains and crews. The fleet here is always ready for battling big fish, evident not only by the remarkable grander catches, but by the good portion of big blue marlin that get released on a regular basis. This inaugural 2015 Hawaii regional report briefly summarizes an unbelievable grander blue marlin season in Hawaii and Pelagic is proud to be featuring more frequent reports from this Pacific hot spot.

As of November, eleven blue marlin over 1,000 pounds have been caught worldwide. Seven of the eleven grander blue marlins have been caught in Hawaiian waters. Six granders were caught off the Big Island, five off of Kona (two over 1,300 pounds!) and one on the eastern side of the island off Hilo, another huge blue was caught off Maui, approximately 30 miles away from Kona. Below is a quick review of the seven Hawaiian granders, and congrats to all involved, including those who may not be mentioned. 1. February-Kona: Capt. McGrew Rice and Carlton Arai on Ihu Nui put angler Kai Rizzuto on a 1,058 pound blue marlin. 2. May-Maui: Captains Jay Rifkin and Chris Cole on Jun Ken Po caught a 1,058 pound blue marlin. 3. May- Kona: Capt. Chip Van Mols and Shawn Bebeau on the Luna landed a 1,226 pound blue marlin for angler Dean Lamman after a two-hour battle. This was the fourth grander for Capt. Chip Van Mol’s career. 4. July- Hilo: the 25′ Liberty Dreams caught a 1,010 pound blue marlin. Boat owner Paul Andrade and crew Damien Ching, Chante Ching, Gilbert Abalos and Levi Boteilho caught the fish in about 3 1/2 Hours. 5. July 29th, Kona: Guy Kitaoka caught a monster 1,368 pound blue marlin while fishing for ahi on the 21’ skiff Dayna. The boat was captained by Darrell Omori. The fish was caught on an electric reel – so it would be automatically disqualified by IGFA rules - regardless, this was an impressive feat and a huge fish, worthy of attention.
6. August 19th, Kona: Capt. Kevin Nakamaru on Northern Lights II put angler Brent Nelson on a 1,075 pound blue marlin. Capt. Mat Bowman and Kyle Vannatta were along as crew. The fish had a 143” short measurement and a 77” girth. The tail stump girth was 21”; this measurement coincides with a 1,100 pound fish. 7. August 26th, Kona: Capt. Mat Bowmen and deck hand Kyle Vannatta onboard the Northern Lights I put angler Michael Bilch on a 1,309 pound blue marlin. The fish was landed after a 2 ½ hour battle. Both Bowmen and Vannatta were working the deck on Northern Light II when that grander was landed a week before. Worth noting: this fish broke the tail stump rule – the girth of the tail stump was 19.5 inches, which predicts a weight of 950 pounds.

Worth noting is: with three months to go in 2015, the fifth grander caught in Kona more than doubles the long-term average of two Kona granders per year. The Kona fleet has met or surpassed four granders only six times since 1960. The year 2015 joins Kona’s hottest years hot years for granders - 2012 (4 granders), 2001 (4), 1986 (5), 1985 (5 including, 1 black marlin), and 1978 (6). With El Nino keeping water temps well above average, it would be no surprise if another grander got reeled in before 2016. Maybe Honokohau Harbor should be known as - Grand Central Station!

While the big blue marlin have been getting the majority of the spotlight, it’s important to mention the unsung heroes of Hawaiian waters too- the ahi ranging from 50 to over 200 pounds that are caught regularly and the frequent striped marlin and shortbill spearfish bites. Last but not least, the gastronomical delights that swim in Hawaiian waters– the mahi mahi (dolphin) and ono (wahoo) that are always found here too.

In closing, the warm waters in association with El Nino will probably keep water temps above average into November. I am predicting a steady blue marlin bite through November. Last year the warm temps keep the big girls chewing until December! Remember, Kona is the only place in the world where a grander has been caught every month of the year. There are always blue marlin here and this is a great place to charter a boat –anytime of the year. Look forward to future more in-depth reporting to you. Aloha! Mark 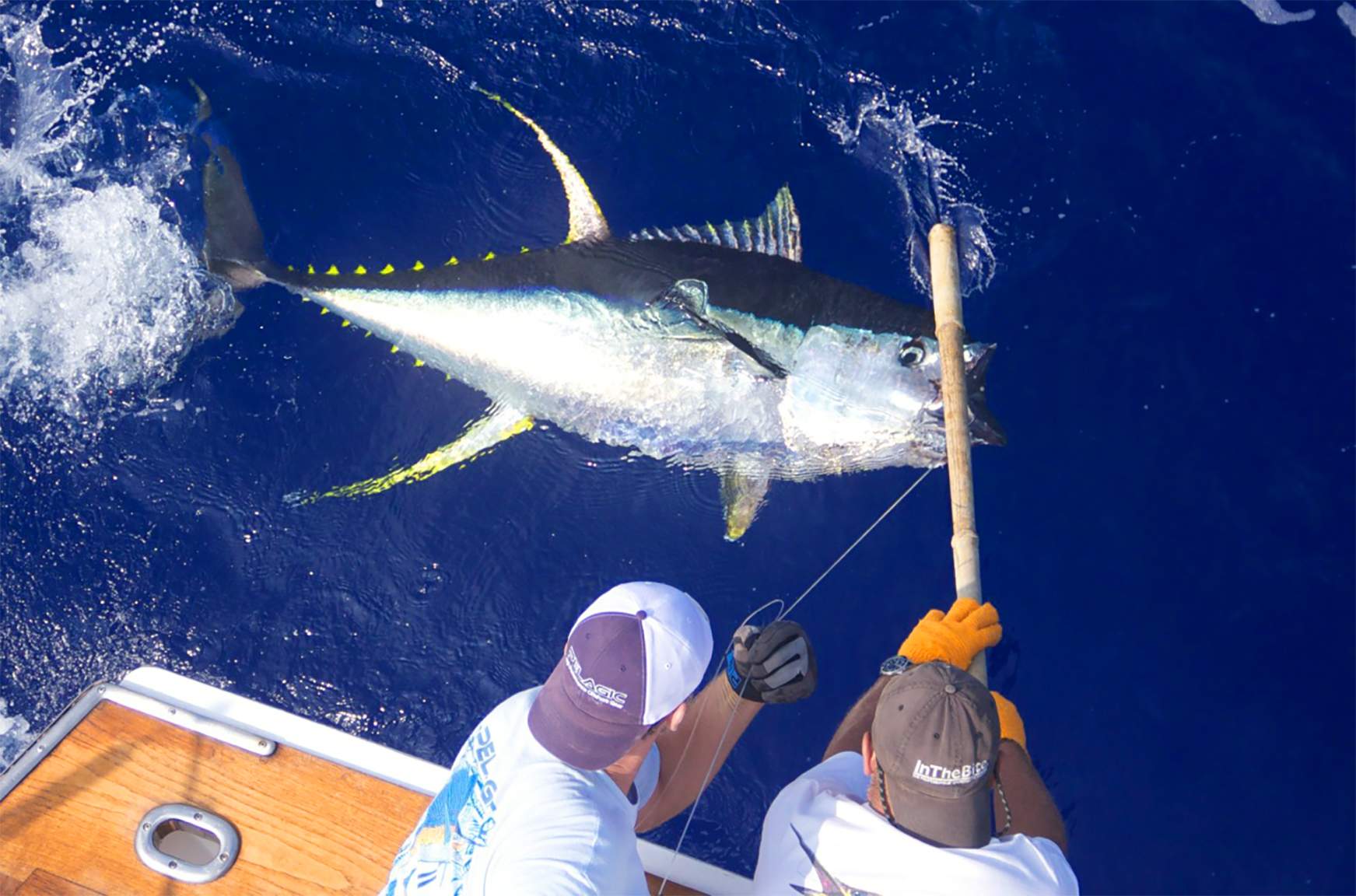 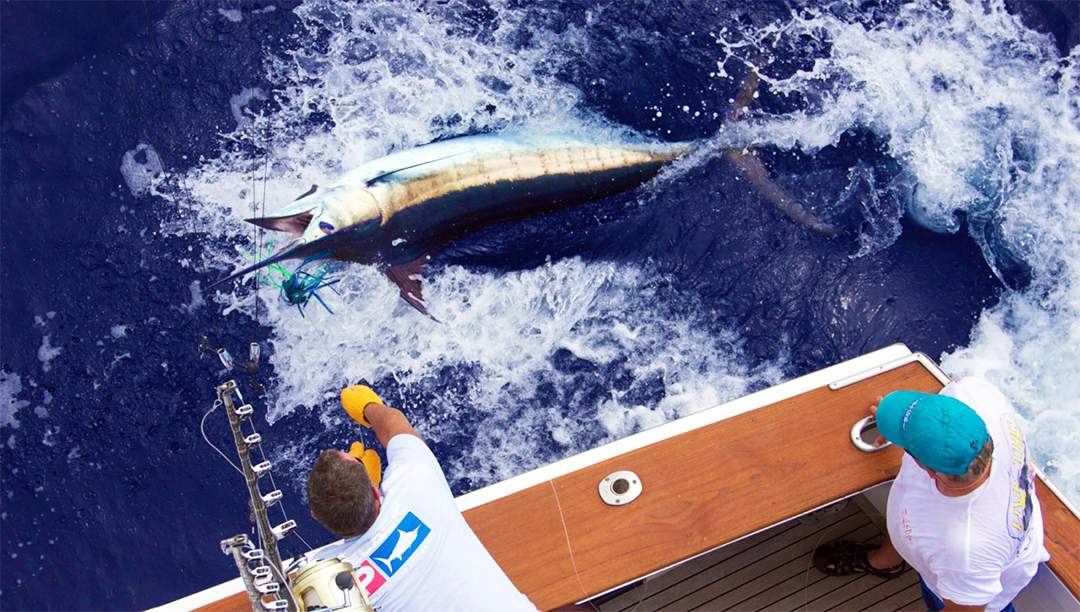