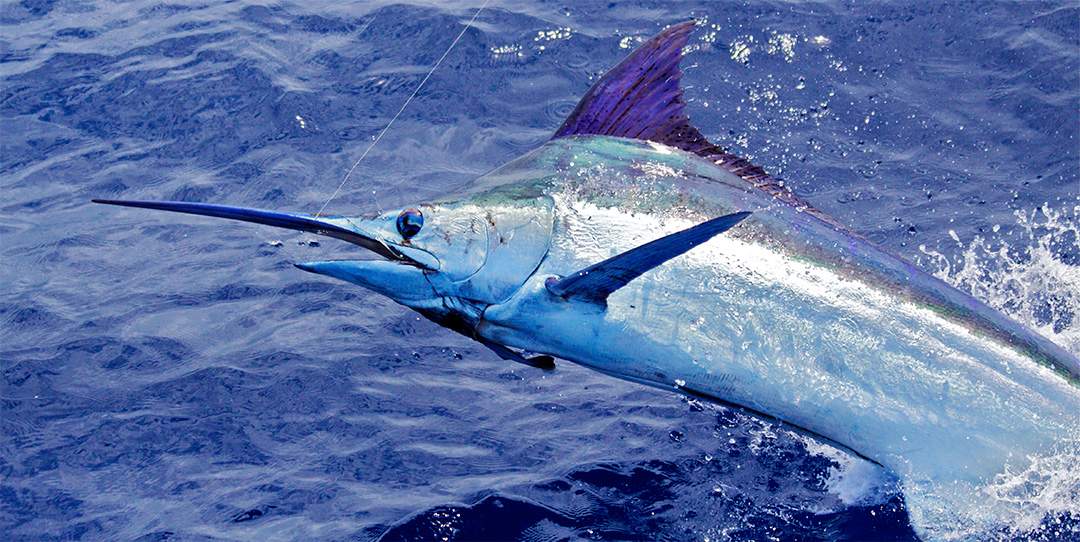 Hawaii is undoubtedly one of the world’s greatest fishing destinations. Home to eight principal islands that encompass a diversity of undersea topography, coastlines, tides and currents- the fishing around this tropical paradise is consistently good year round. When we speak of getting the winter blues in Hawaii- it means the blue marlin are biting. If you are planning a trip to any one of Hawaii’s beautiful islands during the months of January, February or March - rest assured excellent fishing opportunities abound - regardless of what island you go too.

Some people think the offshore fishing slows down here in the winter but that is a relative statement – it’s comparing the winter bite to the red hot summer spawning season. In reality, even in the winter, a day on the water in Hawaii offers greater opportunities for an amazing catch than 80 % of the world’s fisheries during their prime seasons.

There aren’t many fishing destinations where it’s possible to catch blue, striped marlin, shortbill spearfish, big ahi, mahi mahi, ono, along with the possibility of a rare black marlin or Pacific sailfish on any given day. There have also been more than 30 recorded grander blue marlin caught in Hawaiian state waters in January, February and March – so keep an eye on that short  corner bait. On top of all that - there is also amazing bonefishing found in Hawaii that most people don’t even know about.

A couple reasons while fishing is so hot here in the winter. Lying between the Equator and the Tropic of Cancer, Hawaii isn't affected by drastic seasonal temperature changes, but the water does cool in the wintertime and migratory striped marlin, shortbill spearfish and mahi mahi make a greater appearance joining the existing blue marlin, shortbill spearfish, ahi, mahi mahi and ono found here year round. Winter storms originating off the Aleutian Islands pushing south create big northern swells (opposite of the southern summer swell), that not only produce sea temperature change, but push a variety of floating debris (natural and unnatural FADs) into our fishing areas. As the flotilla of drifting FADs pass by the Hawaiian islands- so does the entire food web, from baitfish to granders. The appearance of new debris complements the fish found around the already existing FADs the State of Hawaii has placed in the waters surrounding the main Hawaiian Islands. These buoys attract schools of tuna and other important pelagic fishes, such as mahi mahi, ono and billfish. 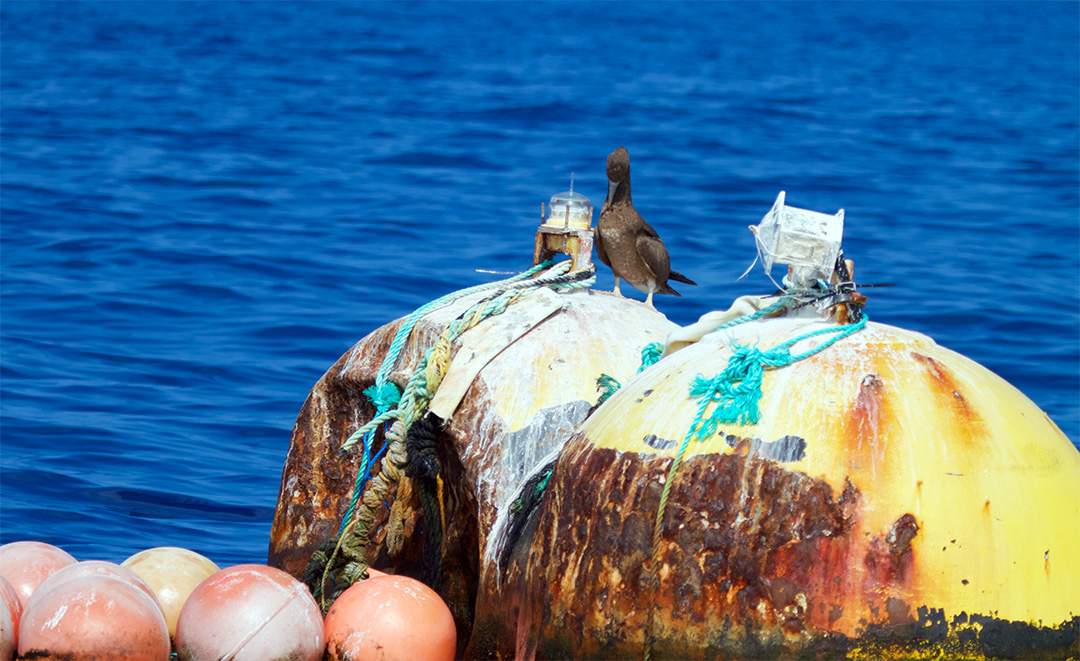 So if you’re headed this way or just interested, here’s a brief synopsis of Hawaii’s fishing opportunities found on the four main islands in the months of January, February and March.

During the winter months, fishing out of Port Allen, the charter captains typically find short bill spearfish, striped marlin, ahi, mahi mahi and the occasional blue marlin. Capt. Darrin Auger of  Nemesis Sportfishing says “when we have charters that want more action, especially when we have kids, we target smaller yellowfin (20-70lb range) on light tackle at the buoys. Live baiting opelu on the ledge for them also. Kauai gets a lot of them on the ledge in the winter time”. Be advised this is just a prelude to Kauai’s good blue marlin fishing and an off the charts ahi bite right around the corner. 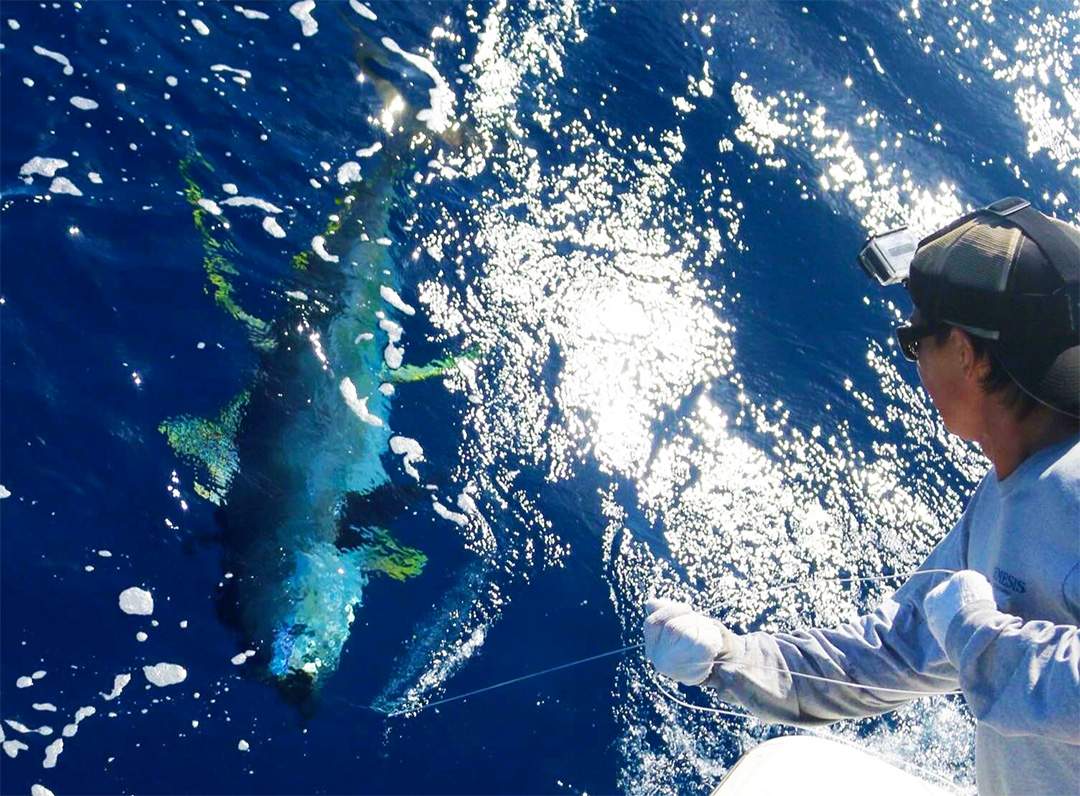 [XL Ahi on the wire | Photo courtesy of Darrin Auger] 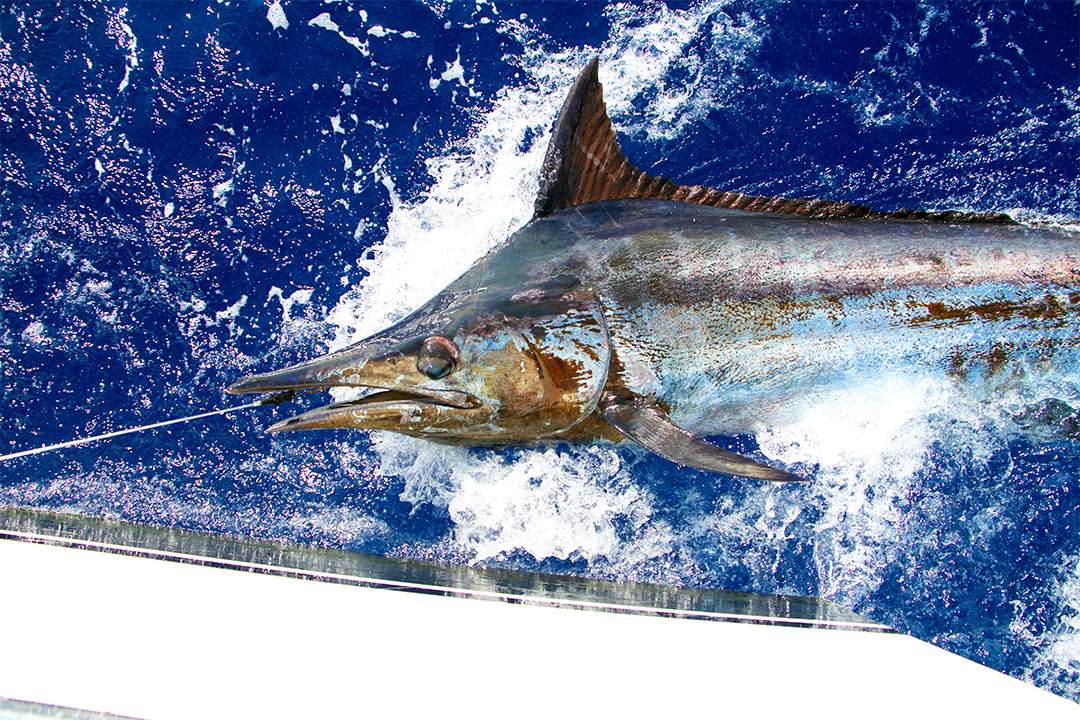 Oahu offshore fishing is good in the winter time. Striped marlin and shortbill spearfish appear, and the winter surf provides natural floating debris in current lines for good mahi mahi fishing. Remember, always keep an eye on that short corner lure - ten grander blue marlin have been caught off Oahu in the winter months and there are always blue marlin in the vicinity. 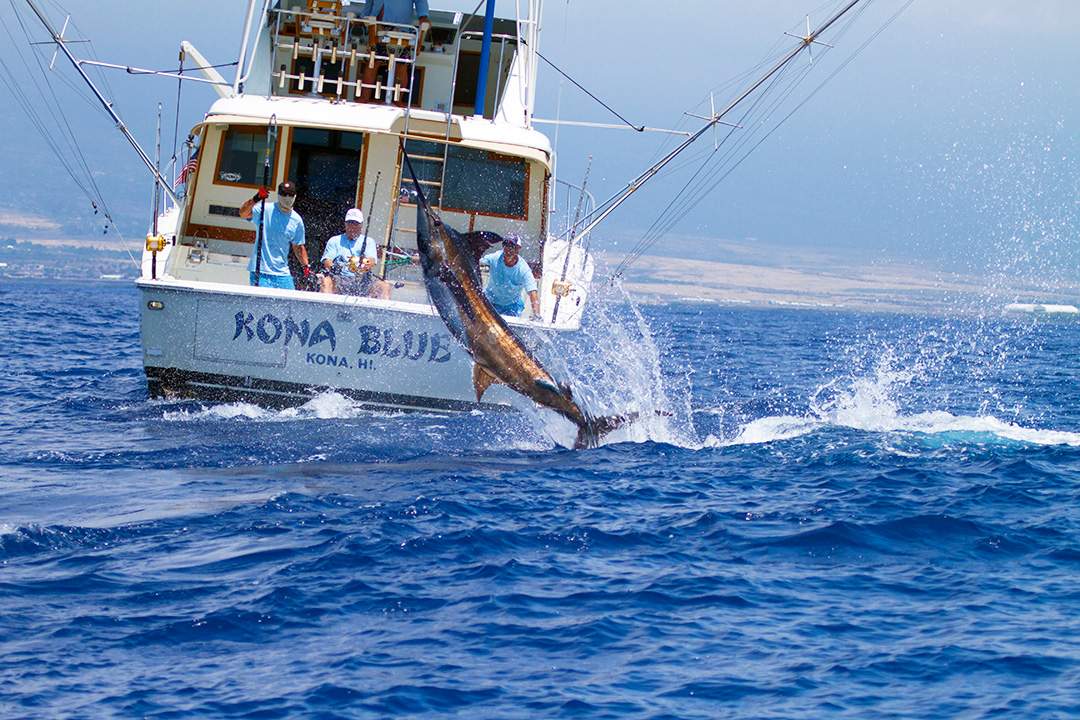 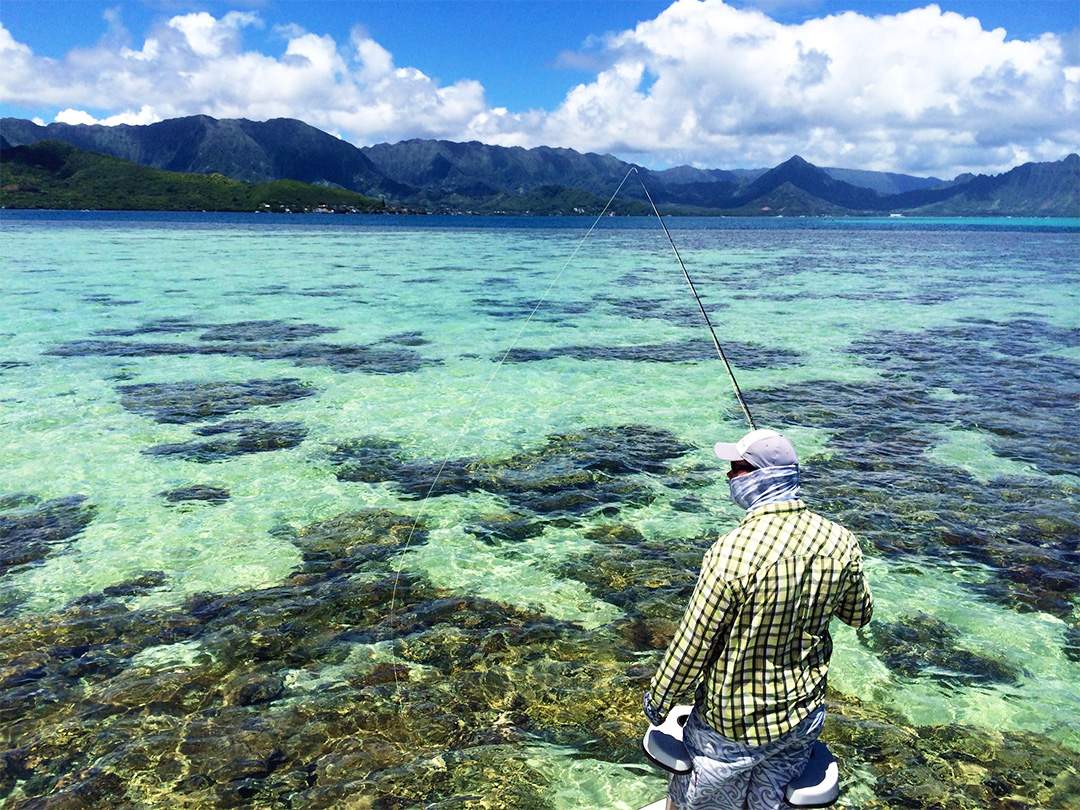 [Bonefishing the flats on Oahu | Photo courtesy of Mike Hennessy]

What many people don’t know is that Oahu has amazing bonefishing all year long and some of the world’s biggest bonefish, with a few nice golden trevelle mixed in on the flats. Oahu has the most extensive flats system of all the Hawaii islands which is very strange for a volcanic island in the middle of the Pacific. The bonefish average around 8 pounds and usually are in singles or in very small groups making them a great target for fly fishing and light tackle spinning rods. Sight fishing is incredibly fun and on the right tides these big fish will tail up in skinny water chasing mantis shrimp and crabs. Wade fishing can be very technical with not much competitive drive to get the bite you have to really get it done and make them think your fly is a real animal! 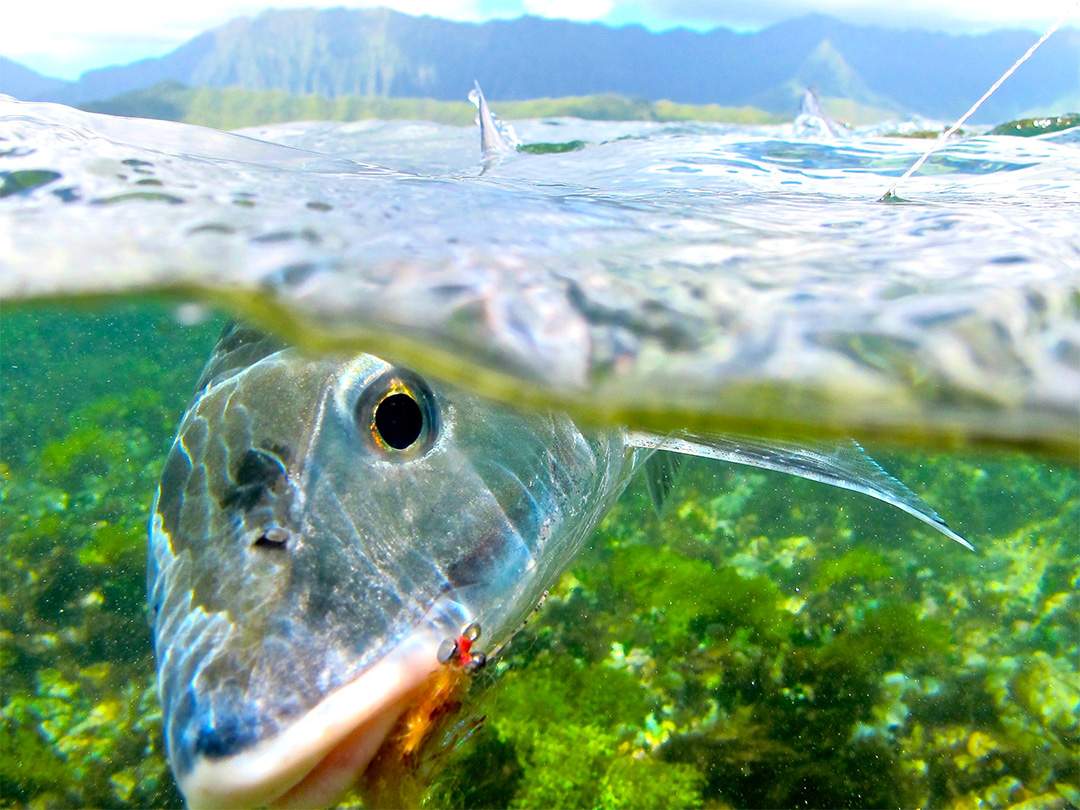 A good striped marlin bite is found in the winter months along with shortbill spearfish, and the occasional blue. The mahi mahi fishing is good too -with most fish over 20 pounds. Capt. Jeff Kahl on the Piper relays that there have been good waves of striped marlin coming through so far this year with boats getting 5-10 shots a day at times. 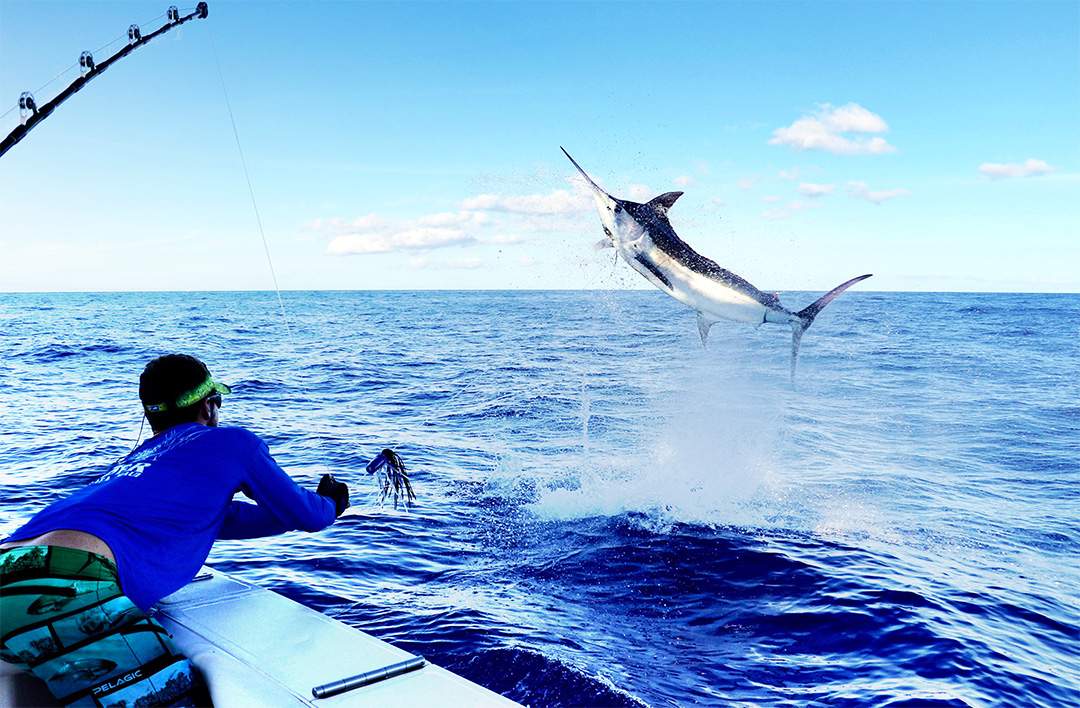 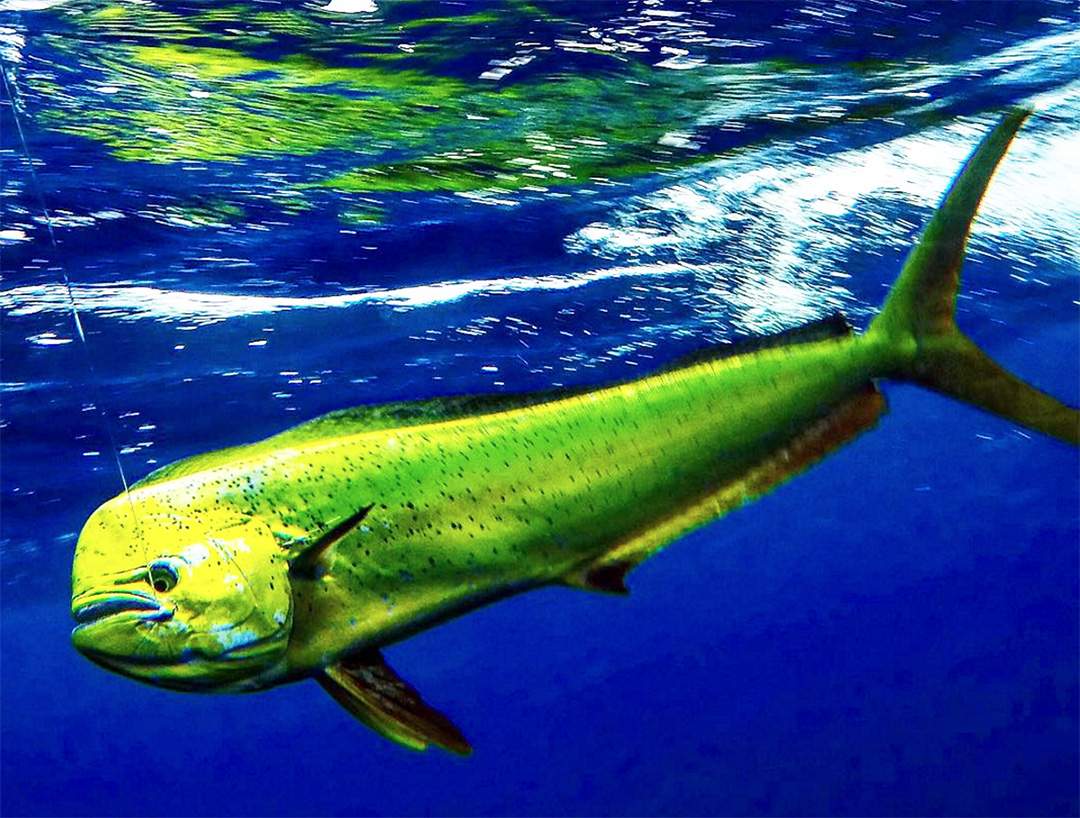 Molokai is an easy to get to, hidden gem found off the island of Maui Bonefish may not be as plentiful as in other places in the world, but what they may lack in numbers, they make up for in size, as average bonefish are from 5-8 pounds, with double digit fish being caught as well. 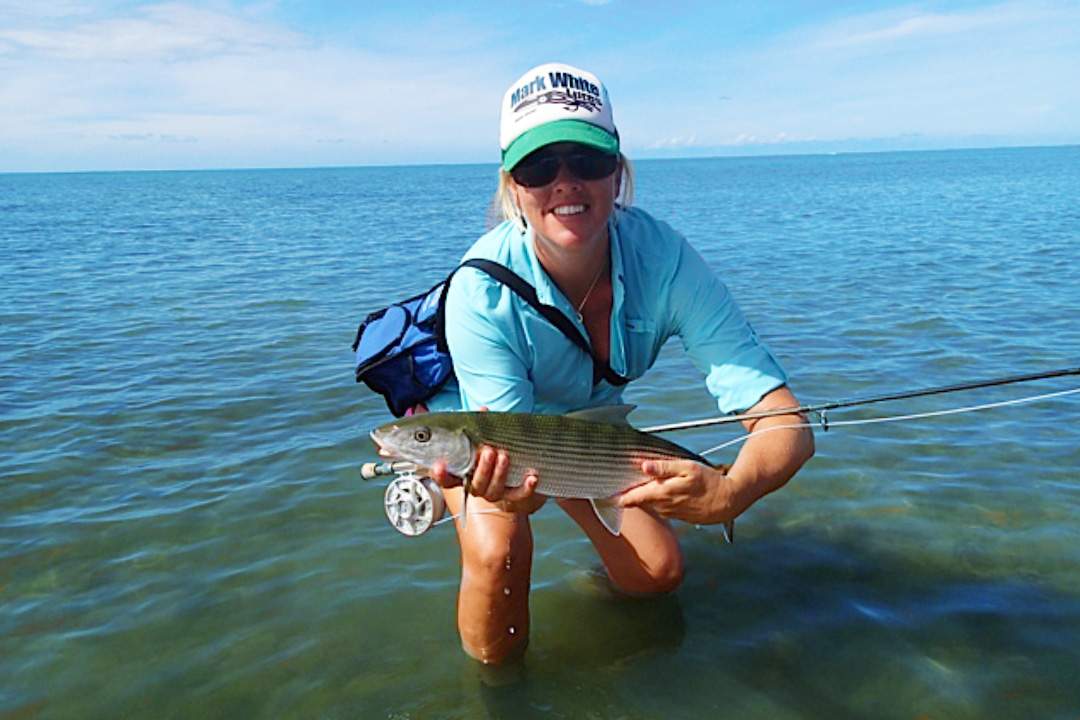 The Big Island of Hawaii

Simply put, fishing off Kailua Kona is amazing at any time of the year. January, February and March are no exception - evident by 20 grander blue marlin that have been caught off Kona during the winter months. A red hot bite has already taking place in 2016. Captains have been catching grand slams (blues, stripeys, spearfish) on a regular basis and lots of flags are flying at Honokohau Harbor identifying blues, stripeys, spearfish, ahi and mahi mahi. Big blues, typically caught at this time of the year, are center stage. So far in January, a 700 pound blue was released by Marlin Magic, a 625 pound blue was weighed by Hula Girl and several captains including Capt. Marlin Parker on Marlin Magic II have raised or had several blues on over 500 pounds. As for other notable catches in January, a 136.5 pound striped marlin was weighed by High Flier and the ahi fishing has been off to a good start too. Russ Nitta’s weighed a 227 pound ahi, and several other charter boats have weighed ahi’s over 190 pounds. Finally, it’s important to remember that Kona means “leeward”, and the seas found here are the calmest in the state. If you are a serious fishermen- Kona is a place that shouldn’t be missed. 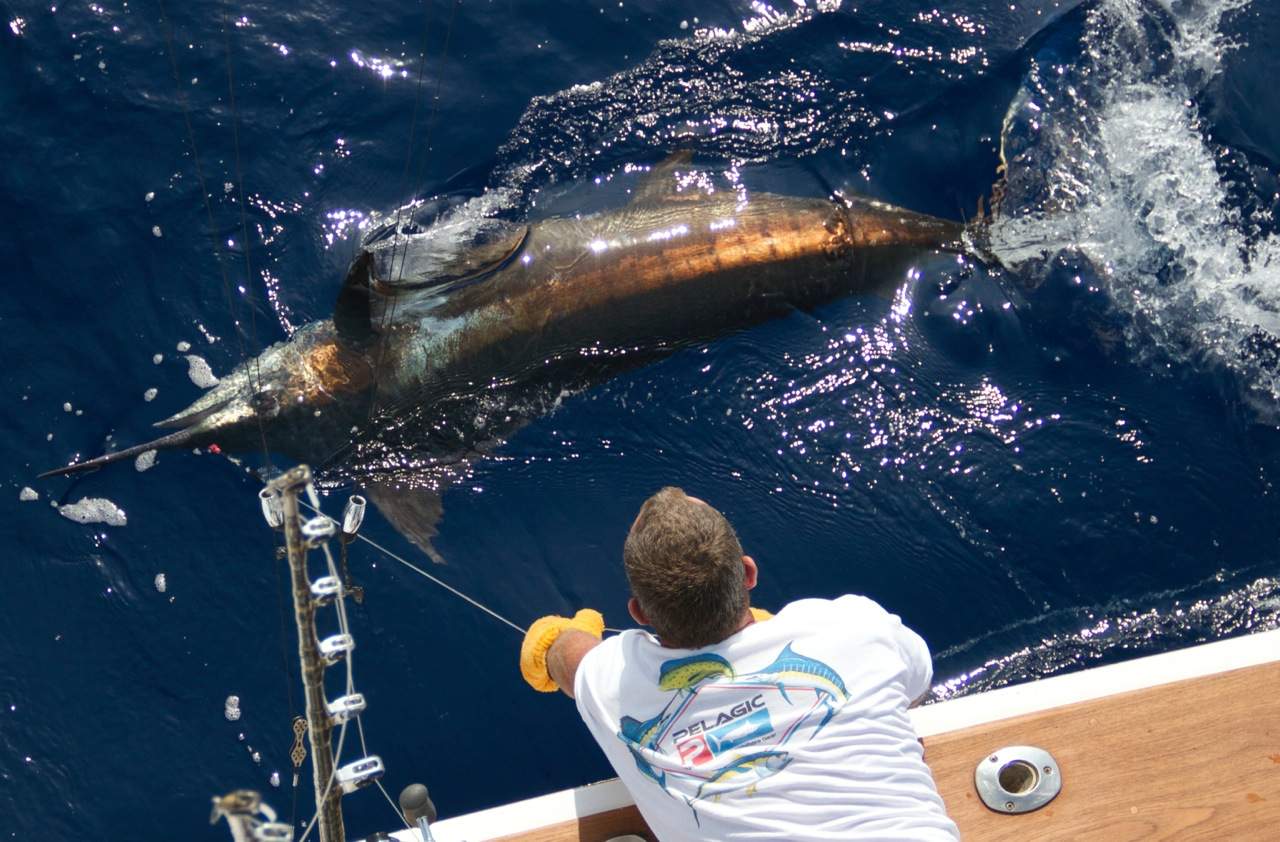 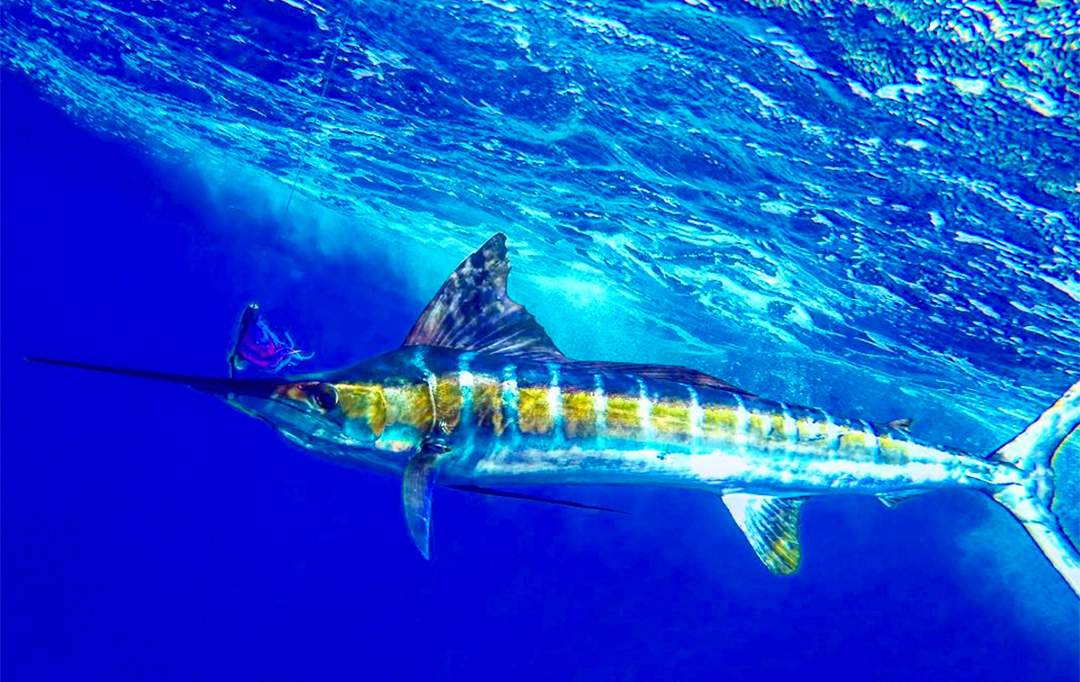 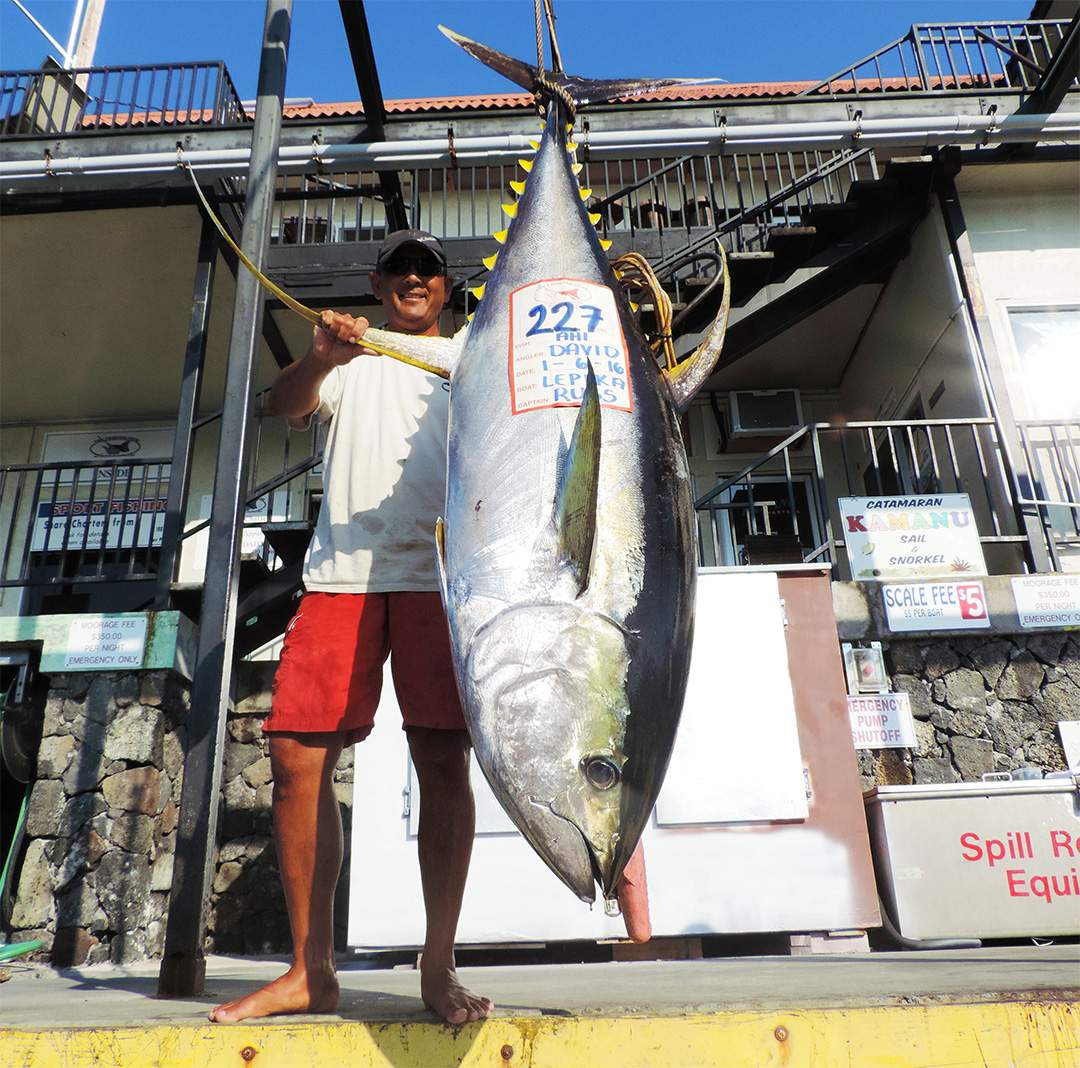