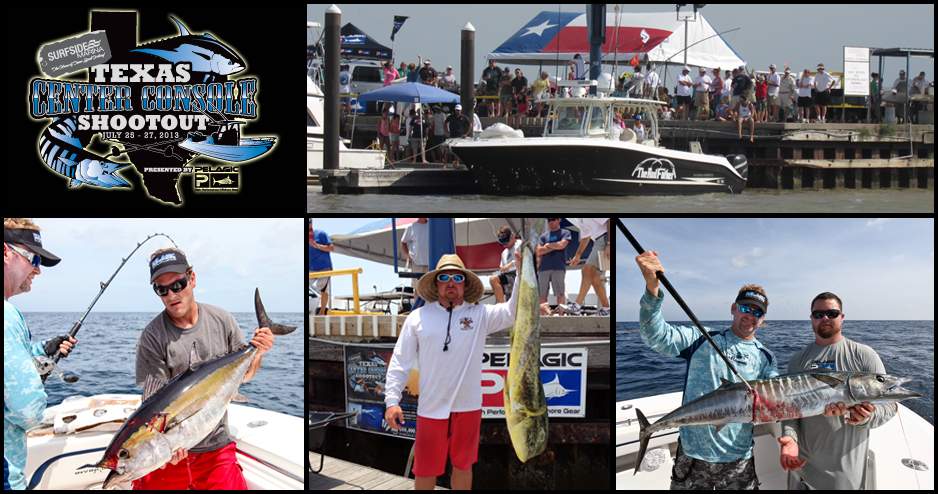 As I sit here writing this, I milk the aching wounds of Mother Nature at her finest. Though she more often than not shows her kindness in the form of favorable weather conditions, this vixen turned a flat calm Gulf of Mexico into a washing machine of mixed 4’ seas at four-seconds and 20 knots of wind within only a matter of hours. Pounding through the confused waters, Pelagic Pro Team Captain, Bill Platt, had the bow of his 36’ Invincible pointed towards Surfside Beach, a small fishing village tucked in along the coast of Texas, in hopes of taking home the victory in the Texas Center Console Shootout presented by Pelagic. Bruised knees, sore shoulders, and a mild case of plantar fasciitis in my feet were the result of a grueling 200-mile run to make it to the scales in time for final weigh-in of the first annual tournament. But, as we learned, that’s all a part of the game if you want to cash in on the incredible fishing that can be experienced in the outer waters of the United States' Third Coast. 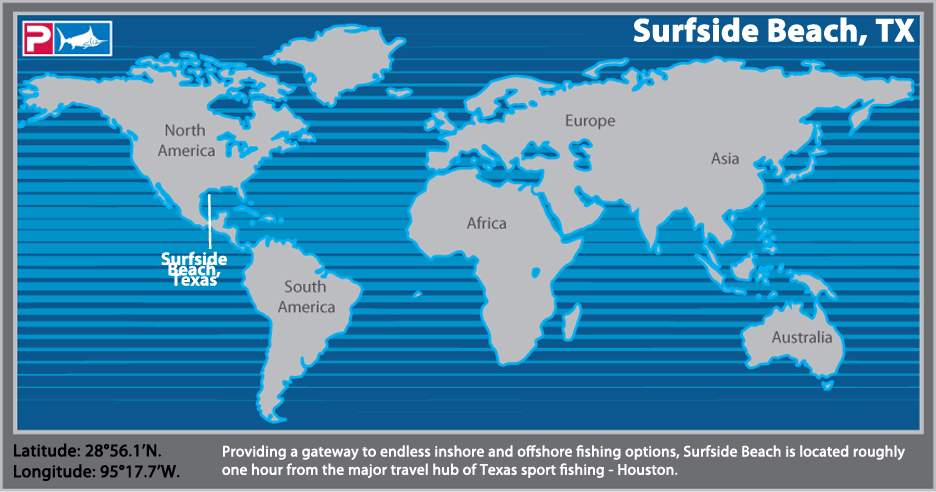 Hosted by Surfside Marina, the tournament saw twenty boats enter to take on the challenges of the two-day, overnight event. A $500 payment bought teams into the three-division general entry, where each boat could score their two heaviest fish in each category of tuna, wahoo, and dorado, gaining one-point per pound. Teams that managed to score at least one fish in each of the three categories were awarded the “Gulf Slam Bonus” of 100 points by tournament director, Tony Berkowitz, a factor that would ultimately separate the bulk of the pack. Additionally, optional jackpots were available for teams who wanted to up the ante in any or all of each of the categories, on a single-heaviest, winner-take-all basis. There was also a “bonus” swordfish jackpot option; however, none were weighed in the 2013 installment of the TCCS.

Surfside Marina can only be described as a gem of the Gulf Coast. The facility boasts a monstrosity of a center console dry-stack; on-the-water slips for larger sportfishers; private tackle lockers; full-service equipment, tackle, and refreshment center (now carrying a large selection of Pelagic products); fish cleaning services; as well as multiple showers. And, being conveniently located only one hour from Houston, Surfside Marina is a fisherman’s paradise which offers endless options for both inshore and offshore adventures, with small, mid, or big game options.

Below: The incredible dry-stack facility of Surfside Marina, stacked four high // Now that's what I call a fork-lift! 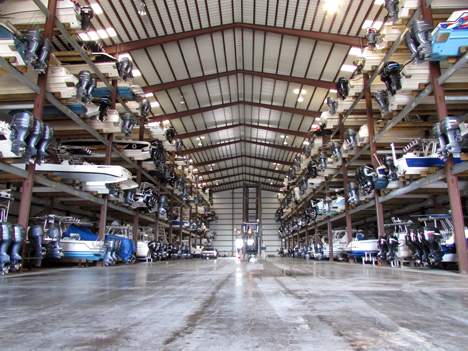 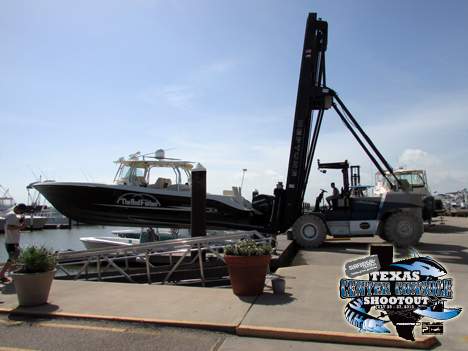 One could write a novel of their own about the incredible inshore fishery available in the Gulf – stories of giant bull redfish, ferocious speckled seatrout, and monster sharks from the beach trace the paths of the shallow waters of the coast. But, let’s face it, we were there to experience the bounty of bluewater pelagics found far offshore near oil drilling platforms, or current rips collecting weedlines that span for miles, or the generous supply of anchored buoys and drifting shrimp seiners that all gather life. A 4:30 am Friday departure called for an early night, leaving tournament angler’s dreams filled of big-game offshore and a chance to hoist the first TCCS Cup.

Below: Team Pelagic's John Nau hoists a hefty bull redfish caught while waiting for tournament boats to arrive for weigh-in // The sun sets over Surfside Marina the eve before launch. 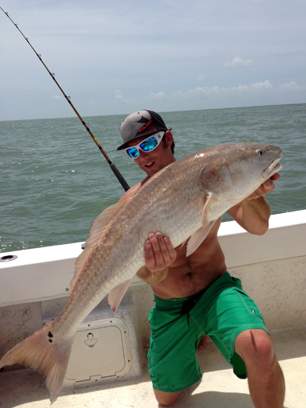 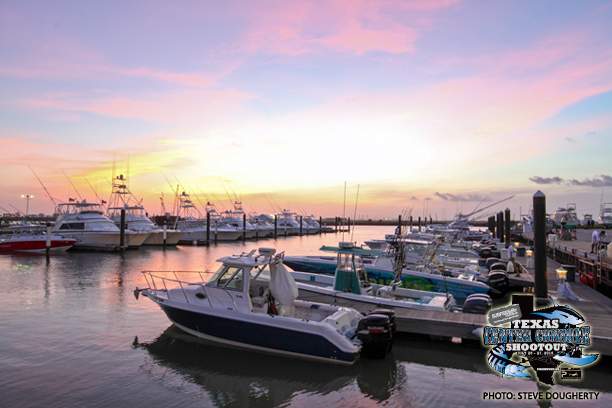 Jumping on board Captain Bill Platt’s Papotanic , a 36’ Invincible newly rigged with triple 300 Yamahas, and loaded with nearly 600 gallons of fuel, including two 55-gallon drums, we were ready to go the distance and fish hard. Our crew along with Captain Bill included Captains Preston Mixon and Joey Austin – two very experienced Gulf fishermen – and joining us onboard was Captain Steve Dougherty of Florida Sport Fishing Magazine .

We galloped offshore along with the fleet of twenty vessels vying for win. Our first stop would be to load up on live bait at a shallow-water oil rig. The quick sojourn produced a healthy tank of blue runners, and we picked up and steamed on to our next destination – The Flower Gardens.

Below: Making live blue runners for bait was a quick and easy task at an inshore oil platform. 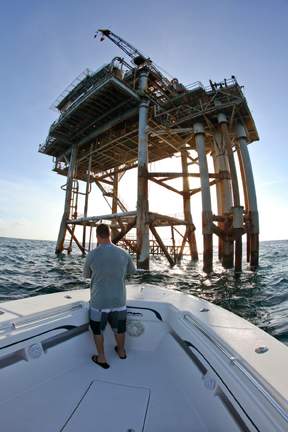 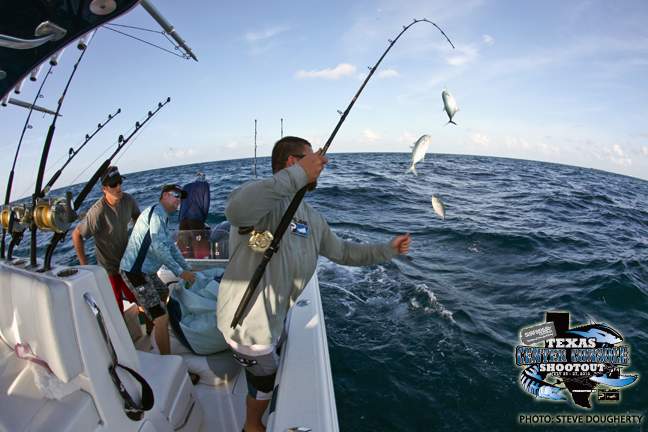 En route to the National Marine Sanctuary, we came across a promising current rip that was showing off a distinct color change and a phenomenal weedline. No more than five-minutes after our lines hit the water did we get the first adrenaline rush of the trip. A speeding wahoo came skyrocketing out of the cobalt blue water, wreaking havoc on our left outrigger and screaming drag – we were hooked up. The fight ended with Joey boating a beautiful 25-pound wahoo gaffed by Capt. Bill. Trolling for only a few minutes more, we managed a couple of small, “chicken” dorado, before racing on to the next hot spot.

Below: Capt. Bill Platt and Joey Austin show off a trolled-up wahoo // This weedline was endless. 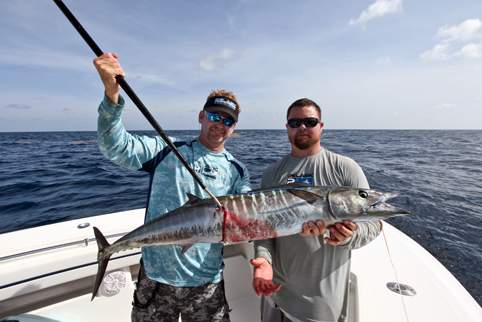 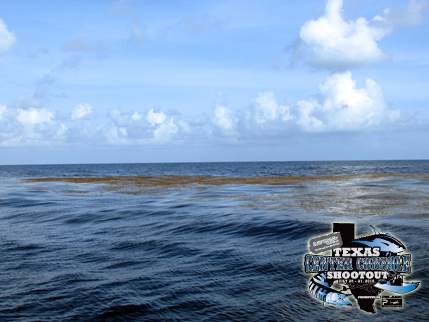 It’s amazing to me the life one can find when discovering something adrift offshore. Now, imagine that drifting object as a shrimp seiner, lazily discarding unwanted “chum” particles in its wake… Goldmine! We spotted the shrimper off our bow and decided to give it a try. The experience is something that will last a lifetime…

The area was teaming with life as large blackfin tuna, bonito, cobia, and open-water sharks immediately bombarded our boat when our chum and bait hit the water. In less than twenty-minutes, we maxed out our ice-box – but not our fun – with hard-fighting cobia and blackfin, as well as a few bonito that would later be chunked for the much larger yellowfin tuna.

Below: Life teaming around an offshore shrimp boat // This is just ridiculous - photo: Steve Dougherty 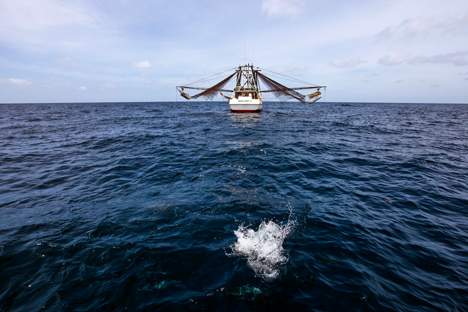 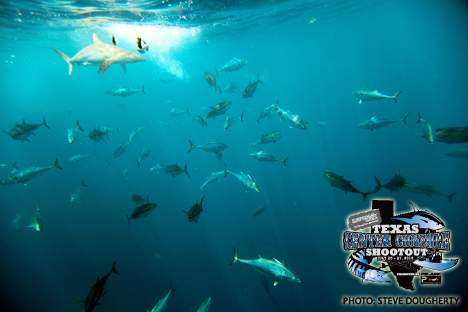 Moving on and leaving the fish biting at the shrimp boat behind us, we made it to the Flower Gardens, our initial target destination. After only picking up a few more small dorado, we decided to leave for the further offshore oil rigs and fish for large tuna overnight.

Our oil rig of choice was one named Auger , a platform operated by Shell and residing in roughly 2,800’ of water and well-over 200-miles offshore. Seeing the rig in person was impressive in itself, but watching the sun set into the Gulf’s pristine waters behind it was simply a sight to behold. Soon, a waning full moon rose and we began drifting for large tuna beneath the stars.

Our fish bit in the early-morning hours of Saturday, our bonito chunks producing respective yellowfin tuna of forty and fifty-pounds, the latter of which was the largest tuna landed in the tournament and scored us the divisional jackpot.

Below: The sun melts into the waters of the Gulf of Mexico with _Auger _in the foreground // Nothing wakes you up more than a screaming drag at 3am - the author got in on the action with this 50 lb. YFT that bit a bonito chunk on a sinker rig. 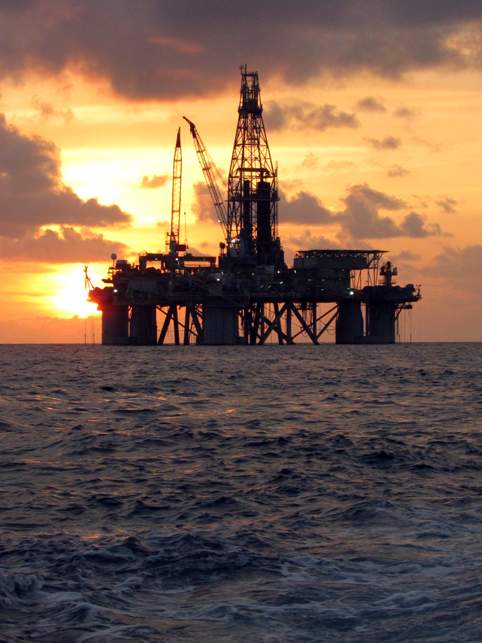 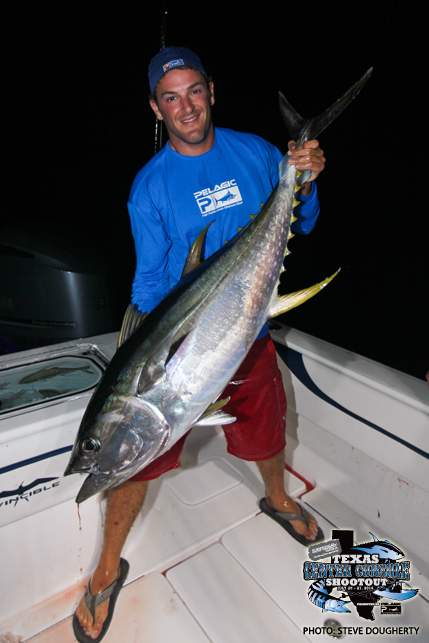 At around 4:00 am, Mother Nature showed first signs of crankiness; by daylight she was in a full-blown temper tantrum. She kicked up the aforementioned high winds and rough seas, leaving us with no other option than to prepare for the unpleasant ride back to land. It would be an all-day journey to make it to the scales by no later than 6:00 pm for final weigh-in.

The unrelenting run into Surfside Marina took a perilous eight-hours of throttling jolts as the Invincible pounded the waves, leaving our five-man team battered and bruised, but excited to be back on land. We were welcomed by a large crowd that had gathered to see the final tournament results.

Below: A large crowd awaits the final results as one-by-one, entrants return from the long run offshore // Team _Johnny B _weighs their largest wahoo. 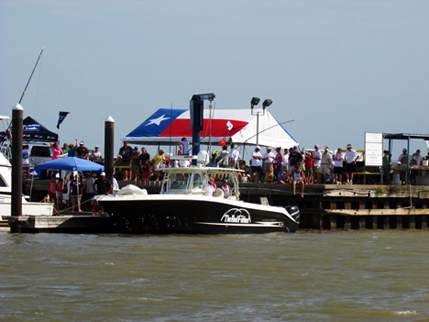 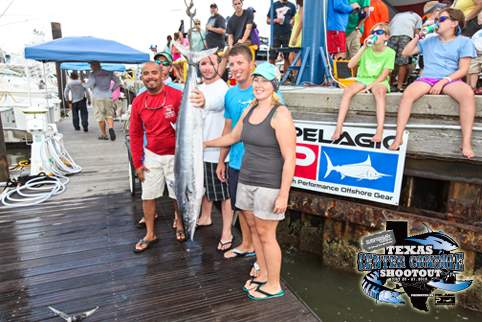 In the end, our team aboard Papotanic prevailed over the twenty-boat field, taking first place honors in aggregate points. We managed to score 223 points, including the “Gulf Slam Bonus”, for our catch, as well as top tuna jackpot. Our combined winnings saw a $12,057 payday. Team Johnny B was awarded $2,137 for second place overall with an aggregate total of 218 points, while Prima Donna took home a $6,500 wahoo jackpot for their 39-pound fish. Also landing a nice $7,355 check was Under Cover for third place overall with 170 aggregate points and top dorado jackpot honors with a 24-pound fish.

Below: Team _Prima Donna _weighs their jackpot-winning 39-pound wahoo // _Under Cover _all smiles with their trophy, jackpot print, and, of course, their check. 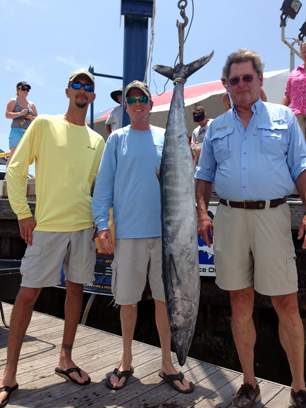 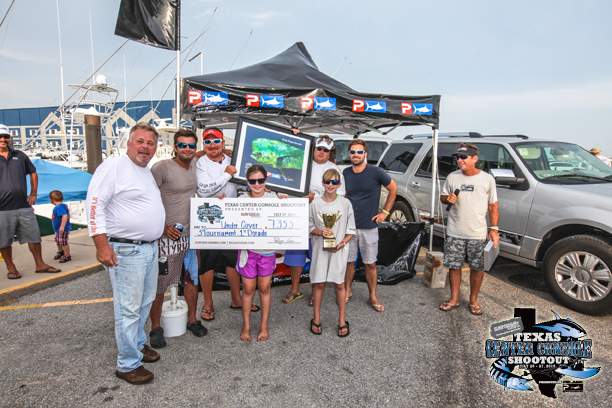 As the old saying goes: “Expect the best, but prepare for the worst.” This is particularly true for the fertile, yet unpredictable waters of the Gulf of Mexico. Anything can happen out there, especially at distances of hundreds of miles. We experienced the incredible fishing that the Gulf has to offer, though it came with a price paid in the form of sloppy, almost dangerous return conditions. One thing is for sure, the rewards are great for adventurous anglers that go the distance – just be sure to constantly check the weather forecasts, and be prepared to pick up and leave if the weather turns on a dime.

Below: It was a very close finish, with only 5 aggregate points separating first and second place overall. Team _Papotanic _took home the win in the First Annual Texas Center Console Shootout presented by Pelagic. 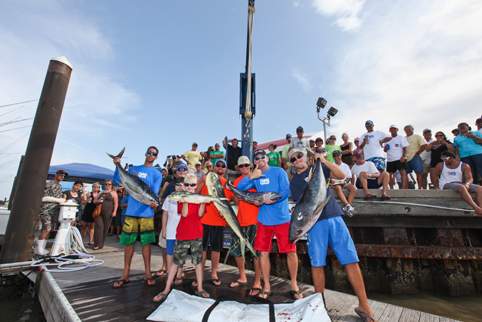 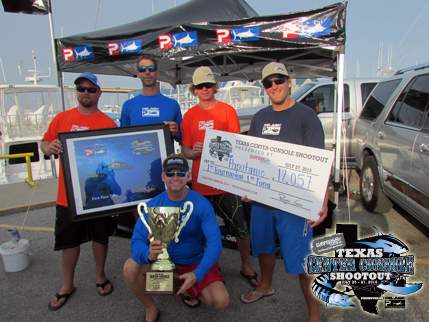 Congrats to all captains, anglers, and crew who fished hard, went the distance, and battled the elements on the way in. Needless to say, all followed the same mantra during the tournament: GO DEEP, OR GO HOME!