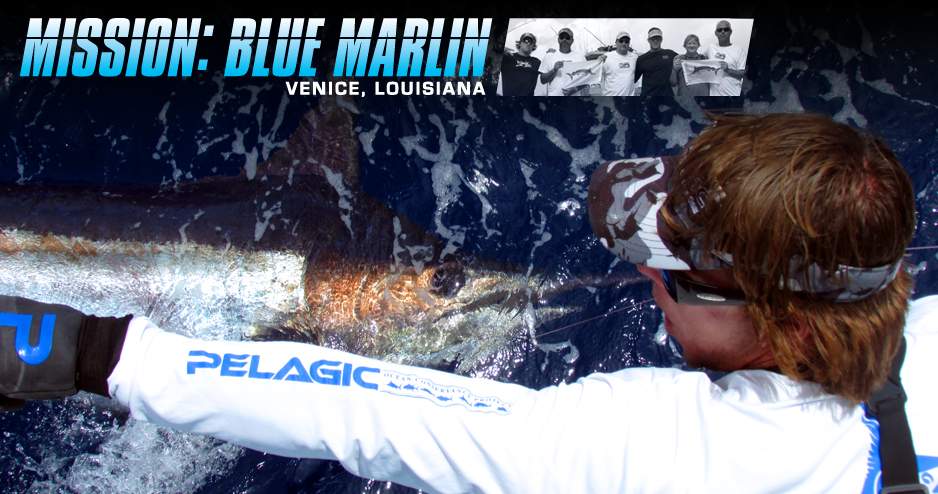 The twin V8 Yamahas on Pelagic Pro Team Captain Hunter Caballero’s 41’ Custom Catamaran Tailwhipped purred as they slowed from a brisk 40-knot cruise and settled to trolling speed. We had made it to the first destination on day one of a two-day charter. The goal of this excursion was to target blue marlin, and blue marlin only. With a smile on his face, first mate and fellow Pro Team Captain, Woody Woods, deployed an arsenal of lures and rigged ballyhoo, as Capt. Hunter began steering the vessel around the azure waters of a chosen Louisiana offshore oil-drilling platform.

Five minutes later, we had detonation. No, we did not just bear witness to another Gulf Coast oil disaster; this explosion was in the form of an incensed blue marlin crashing through our trolling spread. The right rigger snapped and drag screamed as line began to melt off the singing Tiagra 50. It was game on.

Hit the pause button and queue the clichéd time machine warping sounds - lets back up to a few days earlier. Captain Woody Woods had called me to ask if I wanted to tag along on their upcoming two-day charter and experience what the gulf had to offer.

“We’re going after blues only … my kind of fishing,” Woody said. “It’s MISSION: Blue Marlin. We’re going to get one, I guarantee it.”

Big words... but, I liked where his head was at.

I had a few days to kill in between events on a tour of the gulf’s coastal states and could think of nothing I’d rather do than spend some time on the water. I agreed to jump on board to help out and snap a few photos. 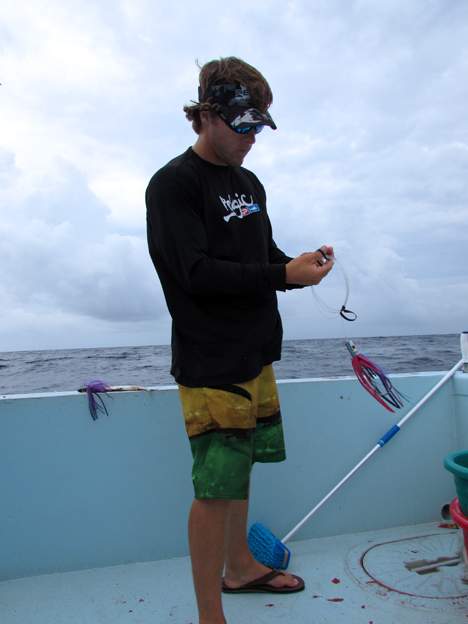 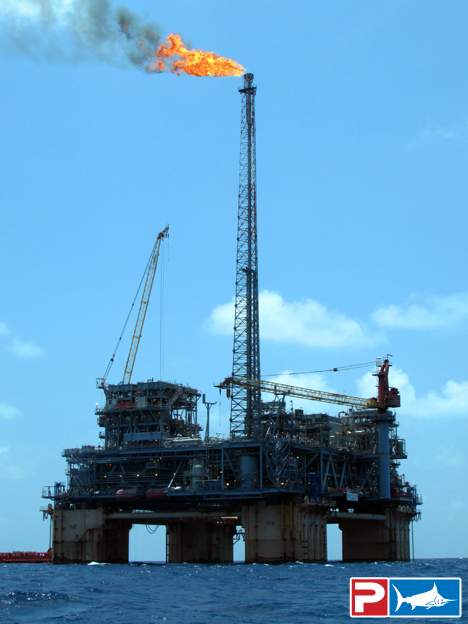 We departed from Paradise Outfitters, based out of Venice, Louisiana, with a charter group of four, and settled in for the long run to the offshore grounds. Some of the best big-game fishing in the gulf can be found around the hundreds of oil rigs scattered in the area far offshore. The run out there is no joke – it’s first a 25-mile ride down the Mississippi River and out of the delta just to get to the gulf, and at least another 30-miles to make it to the outer areas – but, the fertile blue waters are well worth the trek.

In booking their trip, a charter group from Alabama asked that they strictly focused on catching their first blue marlin. Captain Hunter Caballero, owner/operator of Paradise Outfitters, explained to them that they might be in for a long day of trolling; but, if the fish were in a cooperating kind of mood, the action experienced would be nothing short of sensational. Willing to take their chances, the blue marlin adventure was put in the books.

Below: Settling in for the long run to the offshore grounds // There is some nice scenery along the way down the Mississippi. 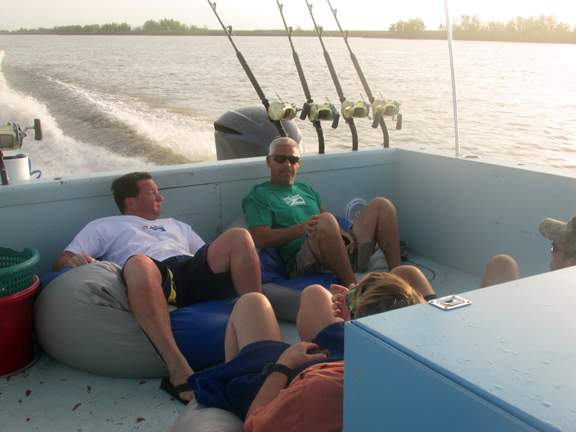 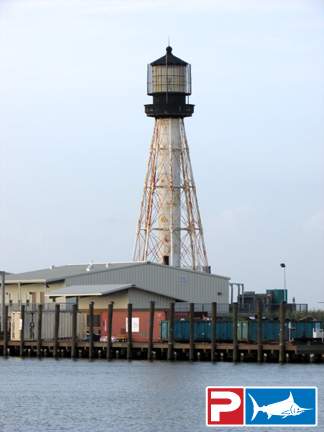 As we pulled into the area of the first drilling rigs we would explore, I got the feeling that we were going to get one. There was a lot of life in the area – yellowfin tuna boiling here and there on bait, flying fish skirting out of our wake, and small free-swimming “chicken” dorado that we would physically see taking interest in our large marlin lures.

We are now in present time, and as I sit aboard Tailwhipped admiring the monstrosity of the oil rig in front of me, the clip on the right-rigger snaps and the Shimano Tiagra shrieked. We were hooked up on the first fish of the trip.

Someone called out, “Marlin!” But, my first instinct was that it is most likely a tuna. Up to bat first was Stacy Spruilll, a first-time billfisherman, and she strapped into the harness preparing for battle. The fish held resolute, digging deep the majority of the fight. This stalwart could almost sense the 30-yard wind-on as Stacy put it back on the reel. On came about 10-feet of leader, followed by a steady dumping that brought us back where we came from, the braid backing.

At this time, I still had not had a glimpse of the fish. Slowly, Stacy was gaining ground, putting a foot or two of line on the reel here and there. Here comes the snap swivel and Captain Woody takes to the leader. Applying his trade to the fluorocarbon leader, the resistant fish showed itself. BLUE MARLIN!

Captain Hunter estimated the fish at around 150-pounds as Woody revived and eventually released the healthy billfish. One hour into the trip and MISSION: Blue Marlin was COMPLETED. It was high-fives and beers all around to celebrate Stacy’s first blue marlin. She also got well acquainted with the Gulf of Mexico by the customary self-overboard toss by the crew.

Below: Stacy Spruill displays a beatifully lit dorado caught close to the oil rig // Woody hoists the first blue marlin of the adventure for a quick pic. 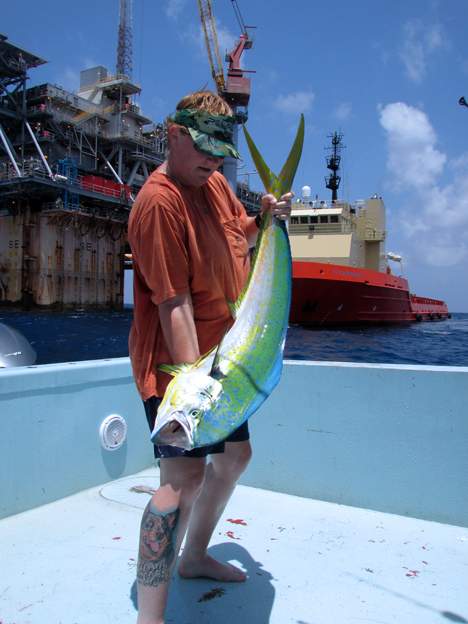 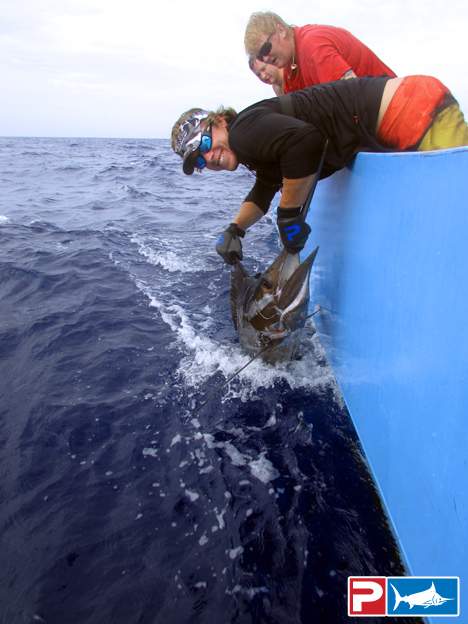 What do you do when you have already caught one blue marlin just one hour into the trip? Try and catch another, of course! Our next tactic would involve catching skipjack for live bait to entice a bigger model to bite. A couple quick laps tucked in close to the rigs using Roddy Hays Dawn Patrol Bullet Jigs was all it took to assemble an arsenal of fiery skipjack for bridle-bait.

A couple hours of live bait trolling ensued with no results. Just as Hunter was about to pack up and head for another offshore right IT happened. I saw it out of the corner of my eye, as a large, billed pelagic came into the spread, mouth open and ready to feed. There was no drop-back necessary – all it needed was one bite and it was game on. Hunter reeled tight on the fish and it began peeling drag.

Other than the initial bite, we never got a glimpse of the fish, as, much like the first, it decided to stay sub-surface, instead of put on the aerial rodeo that most of us recognize billfish by. This fish was stubborn to say the least. On the reel was Scooter Spruill, and he fought the grump for over an hour in the stand-up harness. Eventually, Scooter had to “tap out” and hand the rod off to another Spruill, Kerry, who also fought the fish for over an hour.

It’s hot out there under the Louisiana sun, and combined with the power of the fish, it took its toll on Kerry, who passed it off to Mike Young to finish it off. We’re now officially past the two-hour mark of fighting this fish and finally we are starting to gain some line. Up comes the snap swivel and Woody grabbed the leader. Finally, after a long, grueling battle, we saw the fish.

Below: It's safe to say we're hooked up! // First view of the big blue marlin from the T-top of Tailwhipped . 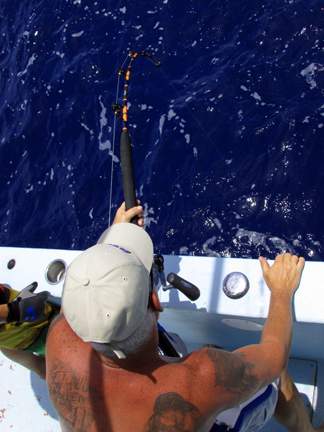 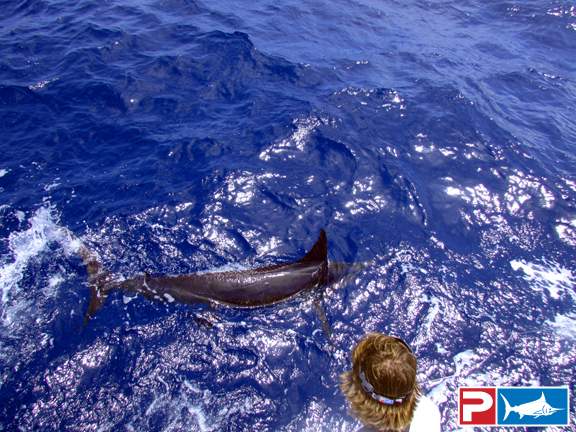 I knew the fish was good-sized, but I did not expect this. While Woody revived the monster blue marlin boatside, Captain Hunter took a solid measurement of the fish and estimated the fish at weighing right around 600-pounds!

Putting Tailwhipped in gear, we swam the fish to revive it and snap a gallery of photos. She was very tired from the long fight, but kicked well after a few minutes and swam off strong and healthy.

Below: The Paradise Outfitters boys play the revival game // Captain Hunter Caballero takes takes the bull by the horns. 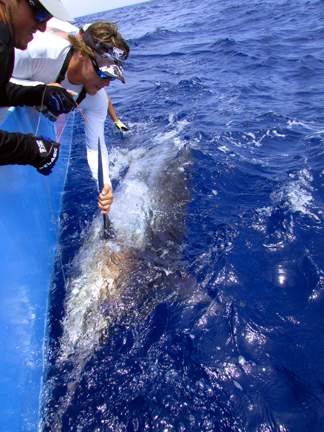 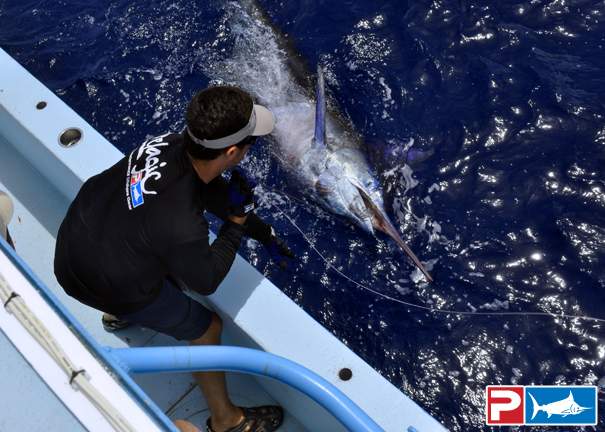 What an incredible fishery the Gulf of Mexico offers. It’s a long run to get to the offshore grounds, but I have to tell you, it’s well worth the travels. Following up the day of marlin fishing, we were able to successfully target dorado on an impressive weedline and land a few quality yellowfin tuna by “chunking” around one of the oil rigs.

Below: 94-pound Yellowfin Tuna hoisted on the day two charter by Capt. Hunter // The group photo with their blue marlin release flags. 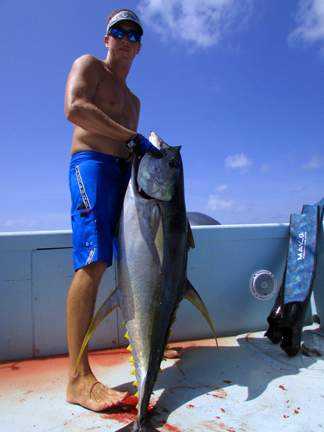 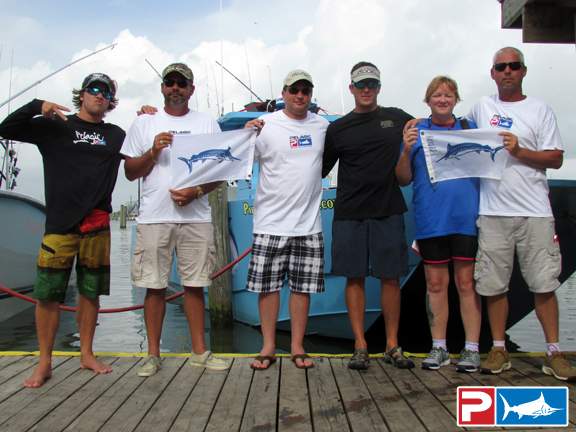 If you are interested in experiencing the Gulf experience for yourself, make sure to head to Venice, LA and book a charter with the guys at Paradise Outfitters. www.Paradise-Outfitters.com