A Dive To Remember

I was trapped again: snorkel out, lungs full of air, dive aborted, and helplessly bobbing on the surface watching a school of big fish pass by so closely that I couldn’t even risk raising my gun. Somehow I find myself in this position over and over again while hunting white seabass in Southern California. It’s almost comical in the most frustrating way: after hours of searching for a white in the cold, green water, your prize materializes at the absolute worst time in the worst place only to disappear just as quickly.

For the last 10 years I’ve been one of the many southern Californian divers who allowed themselves to be fooled by the sirens song of late-winter diving. We think that if we shiver long enough, brave big surf over rocky entries, ignore the cold weather, and spend enough hours in the water staring into a chilly green void, then eventually we will be rewarded with a tanker seabass. Why do we feel this way? Because we let the unbelievable stories of giant, early season fish fill us with the distant hope of someday being able to recount our own such tales and it’s this hope that draws us back to the Pacific in spite of almost certain disappointment. 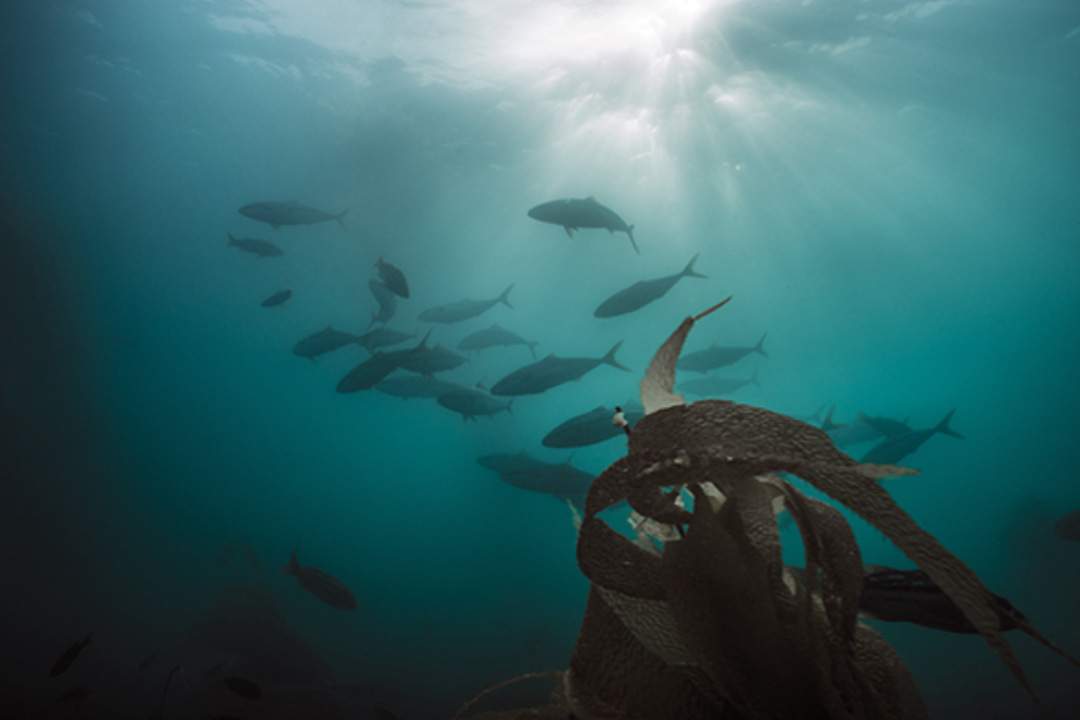 On this particular February day, however, things would play out a lot differently. The dive before I had seen the tail of a big fish slide stealthily into the murk layer only a few feet below me. This surface sighting only minutes afterward was a strong indicator that I was in the ZONE! It was now only a matter of waiting for the right opportunity. I consciously slowed my movements down and continued working the edge of the thick kelp bed. Everything looked so alive: big calicos were facing into the current waiting to ambush anchovies and mackerel from the thick schools of mutilated bait that were cruising in the unseasonably clear, warm water. This was in no way your typical February morning diving in southern California. 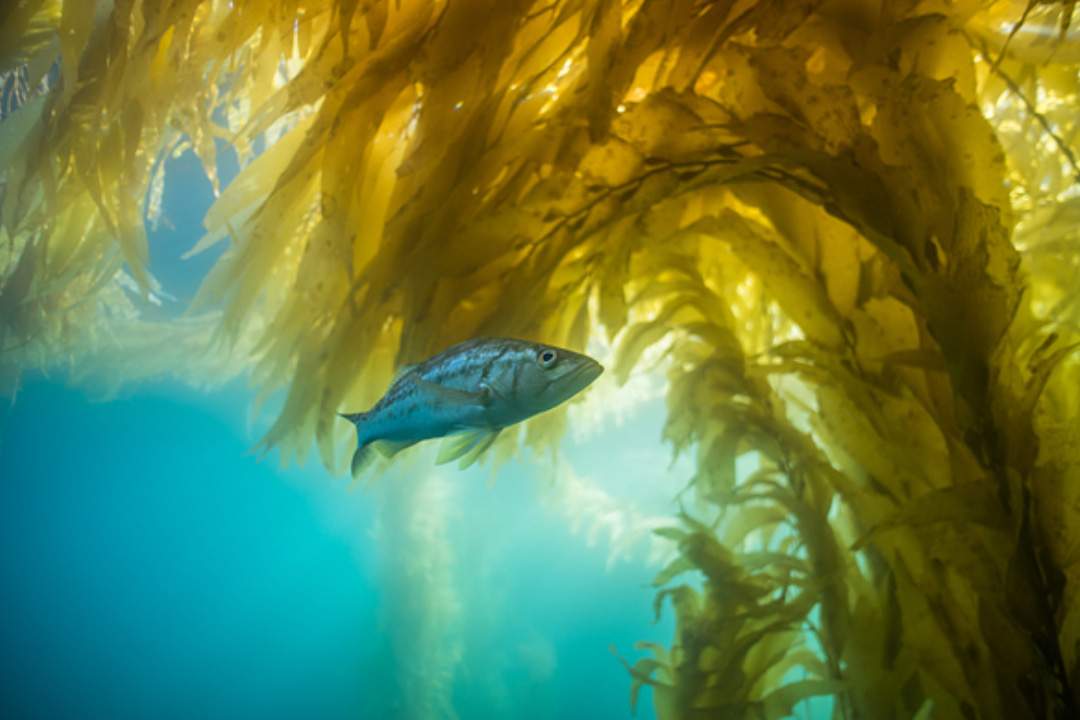 The legendary Bill McIntyre, Austin Derry, and I had headed out for a midweek dive. It wasn’t long before all of the usual winter tales began to surface: talk of the few fish we had all heard had been taken recently, debate over which spot we should start on, and my personal favorite bull session about early season “home guard” yellowtail. “Home guard” yellows are fish so big that they choose to stay in southern California year round rather than migrate, braving cold water and haunting divers and fishermen. A few years back Harold Gibson made a trip south and managed to scratch out 4 white seabass and a solid yellowtail in a 5 day period. When I brought it up, Bill’s reaction to yellowtail was so dismissively apathetic that Austin and I laughed out loud. 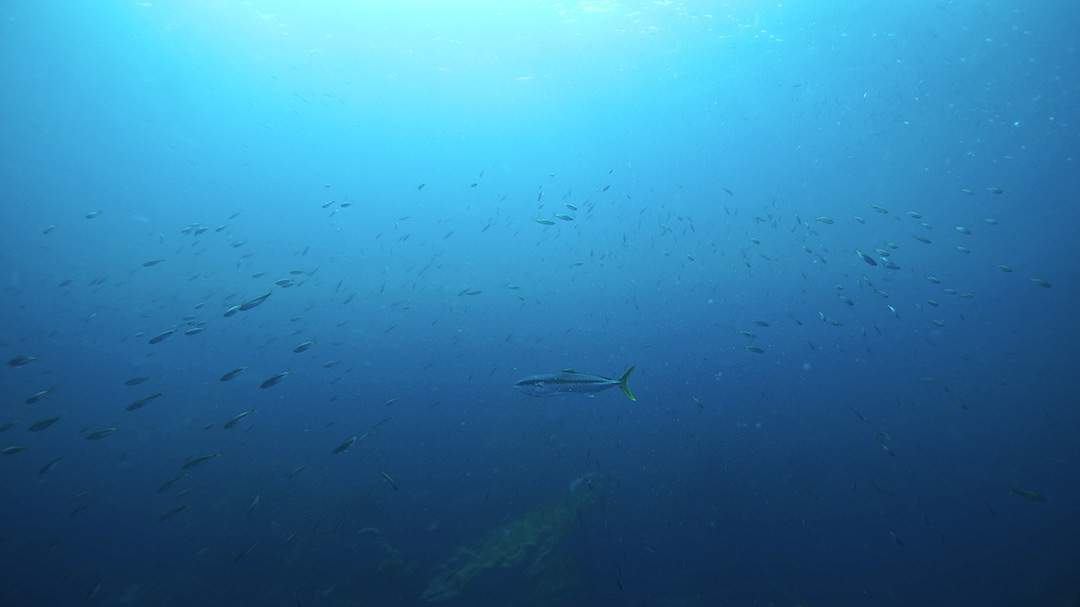 It had been nearly 5 minutes since the last school of 50+lb class white seabass had trapped me. Just as I began to question how good the area I was working really was, I caught sight of a large fish moving past me about 10ft away and just under the surface. I quickly dove and extended my Riffe Island Elite gun, relieved to see 3 more large fish leisurely following the first. I squeezed the trigger and as fast as they had appeared the fish vanished. The float line ripped through my hands as I slid the bands around my shoulder, diving under strands of kelp in pursuit of the seabass. The fight didn’t last long and soon I had the fish up within sight of the surface. I could see that the spectra tip was buried deep in the fish’s shoulder, which eased my nerves while I recovered and dispatched the white. A huge weight had been lifted from my shoulders: my first fish of the season was behind me and anything after that would be a bonus. 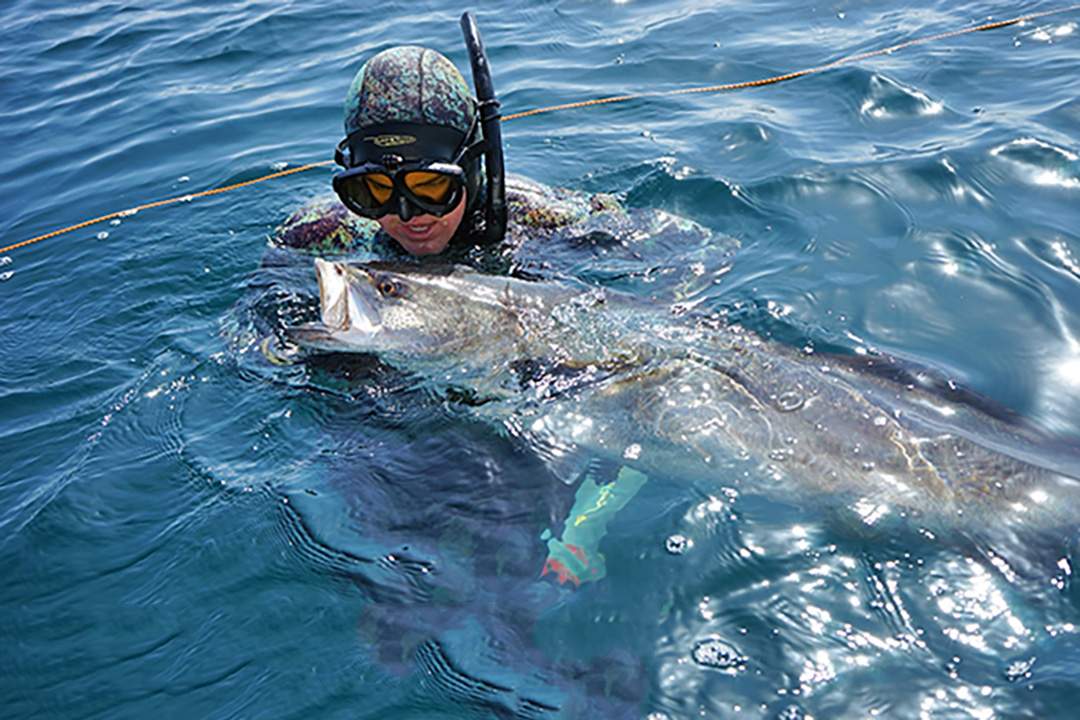 I made my way back to the boat where Bill and Austin greeted me at the swim step. We took a few pictures and then decided to move the boat closer to where I shot the fish. I slipped back in the water and returned to the spot where I’d shot the fish to find that conditions had changed dramatically. The clear water on the kelp edge I had enjoyed only minutes before was now milky and the current was gradually increasing. After a quick consultation, Austin and I decided to move up current toward the kelp stringers where the fish I’d seen were headed. The next few hours passed by with a lot of diving but without much action. Austin saw a large school of big whites and I had seen a huge single fish but neither of us had good shots. We decided to head back to the boat to regroup.

At this point I was ready to call it a day. As far as I was concerned, I had accomplished the impossible by boating a single fish in February. Luckily for me, my dive buddies were still hungry for more, so we decided to stick it out for one more drift of the kelp bed. Kicking hard against the current, Austin and I worked our way back to the up-current end. Earlier I noted a lobster buoy in the stringers close to where I had my last fish sighting and used it as the mark to begin my drift back towards the boat. I was struggling to stay focused while breathing up. I knew that the fish were here and it was only a matter of time before another opportunity presented itself for winter success.

From the surface movement caught my eye on the left. A school of 6 large fish no more that 8 feet beneath quickly swam around a kelp stringer. Instinct took over as I punched a sudden dive, quickly swinging my trusty Island gun at the incoming school. Then, the fish did something I didn’t expect. Almost as if the lead fish had tried swimming into a pocket of kelp stringers he didn’t fit into, the whole school spun a quick 180-degree turn and started to go back the way they came. Kicking hard I closed the gap and lined up on one of the smaller fish in the back of the group. It was only when I was midway through pulling the trigger that I realized I was looking at the unmistakable sight of a yellowtail’s back. It caught me completely off guard, since I thought I was tracking a group of whites in murky water! 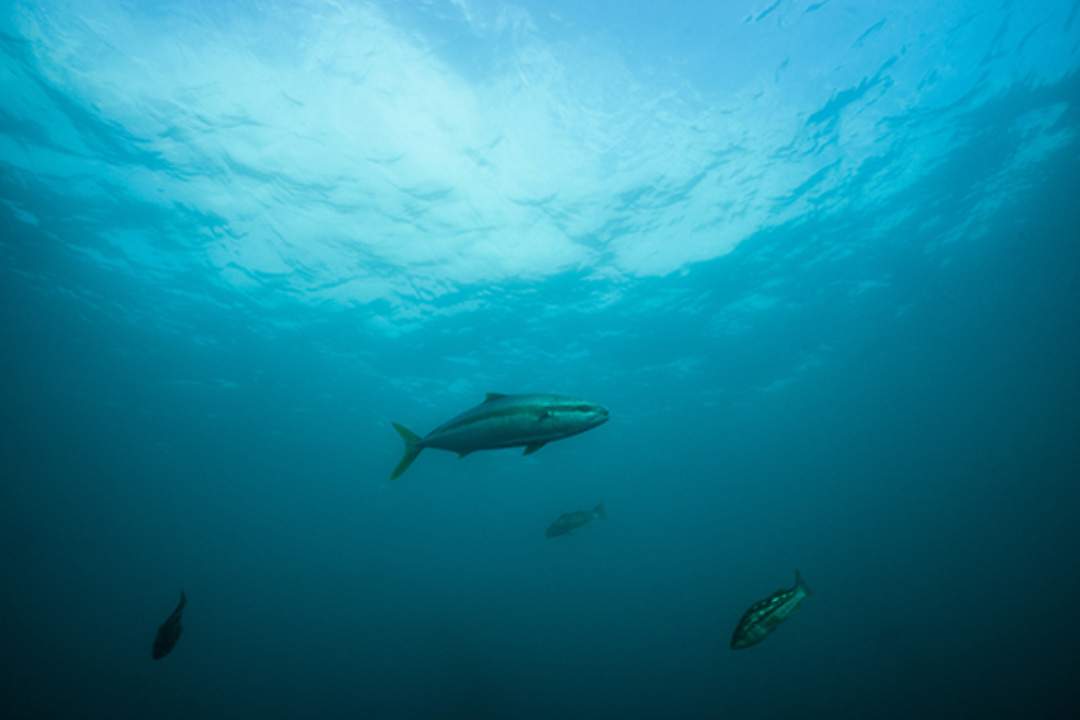 I let the shaft fly and, after another quick fight, found myself pulling the largest yellowtail I’d ever shot in California to the surface. My Riffe Terminator knife found its mark and I strung the slob yellow on my belt. Having heard the commotion, Austin swam over to see what was up. I asked him if he though the yellow was over 35lbs. He nodded and assured me that we were now no longer friends. Back on the boat I was amazed to discover that the yellow was nearly as long as the white.

Later that night I returned home to find Brandon Wahlers, Brian Dreiling and my two younger brothers waiting for me in the driveway, ready to fillet fish and drink rum to celebrate my catch. And with good reason: a day like this doesn’t come around often during the winter in SoCal. Before getting down to business, we put the fish on the scale: the white weighed 49lbs and the yellow 42lbs, making it not only my favorite winter dive in Southern California but easily one of my favorite dives of any season. I want to offer my thanks again to Bill, who has taken out so many divers over the years and always manages to find the fish, and to Pelagic and Riffe, who provided me with the gear that always puts the fish in the boat and keeps me comfortable out on the water. In the most bittersweet of ways I’m sure this small taste of wintertime success in SoCal will only fuel the fire for many more cold, long seasons of searching for trophy fish in cold green water. 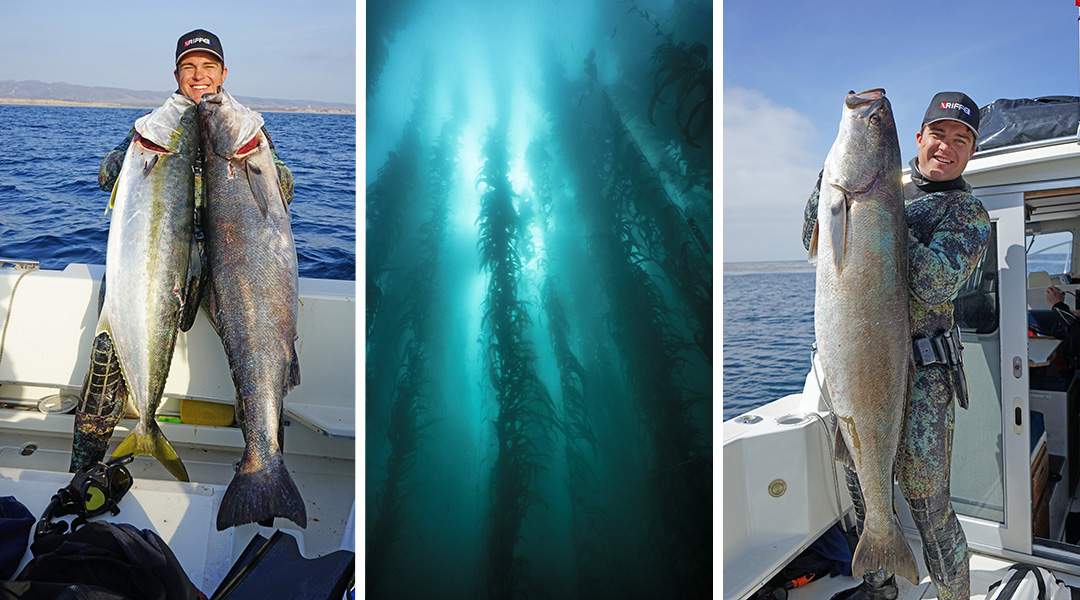