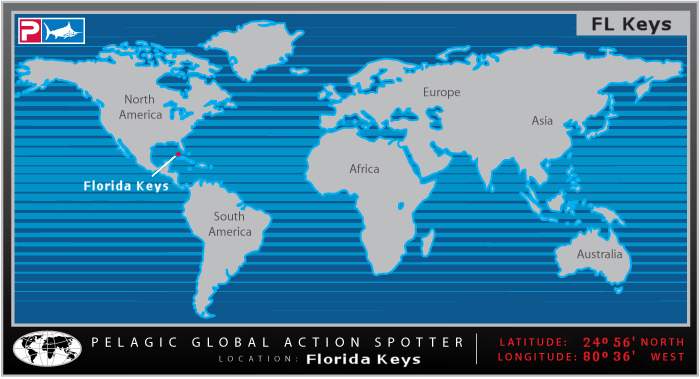 The Florida Keys are an archipelago of 4500 islands in the southeast United States. They begin at the southeastern tip of the Florida peninsula , about 15 miles south of Miami , and extend in a slight arc south-southwest and then westward to Key West, the westernmost of the inhabited islands, and on to the uninhabited Dry Tortugas. The islands lie along the Florida Straits , dividing the Atlantic Ocean to the east from the Gulf of Mexico to the west, and defining one edge of Florida Bay. The unique reef structure and warm shallows are abundant with bait year-around. The Florida Keys hold in close proximity some of the largest species counts for a single place in the Atlantic. With an Abundance of baitfish, be rest assured that giants will not be far away. And of these giants are some of the largest Tarpon in the world.

Below : Hooked up on a Mega Silver King... 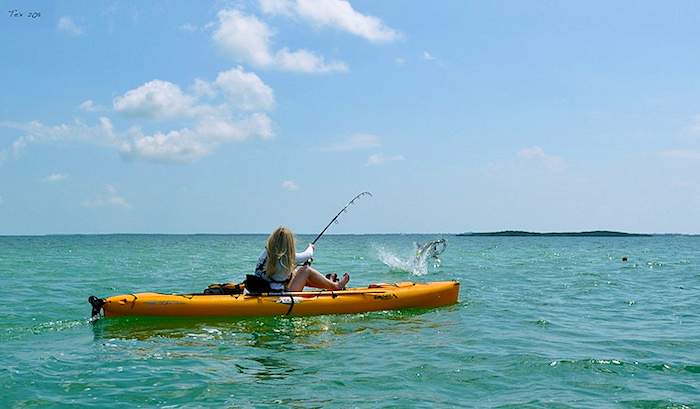 On a recent Keys Kayaking trip, Christopher Lewis from Hobie Fishing Team hit the water with his wife Kristen under great conditions. Chris has been dominating the Flordia kayaking scene with a variety of hugh Tarpon, Snapper, and Cobia. Recently he discovered the art of kayak Bonefish and Permit out of south Florida. On this particular trip they would take their chances at large roaming Tarpon.

The Tarpon Megalops atlanticus is found on the western Atlantic coast from Virginia to Brazil, throughout the coast of the Gulf of Mexico , throughout the Caribbean . Tarpon are found in both salt and freshwater habitats usually ascending rivers to access freshwater marshes which are commonly found throughout FL. They are able to survive in brackish water, waters of varying pH, as well as habitats with low dissolved O2 content due to their swim bladders which they use primarily to breathe with. The habitats are characteristically warm, shallow, dark bodies of water with sandy mud bottoms. It is quite common for Megalops to ascend rivers into freshwater. As they progress from the juvenile stage to adulthood, they move back to the open waters of the ocean, though many remain in freshwater habitats. The whole life cycle of Tarpon can be spent in Florida, and in particular the keys.

Chris with his earned knowledge, knew how to target these beast. And he was eager to get his wife Kristen hooked up and on a sleigh ride of her own. Then it finally happened... Kristen hooked up and after careful guidance and a lengthy battle, she successfully lands the beast. It is among the largest of all Tarpon that have ever been landed by a lady on the kayk. Chris is proud as can be, while Kristen is beyond happy!

Below : Outfishing the men... Kristen posing with a MONSTER KEYS TARPON! 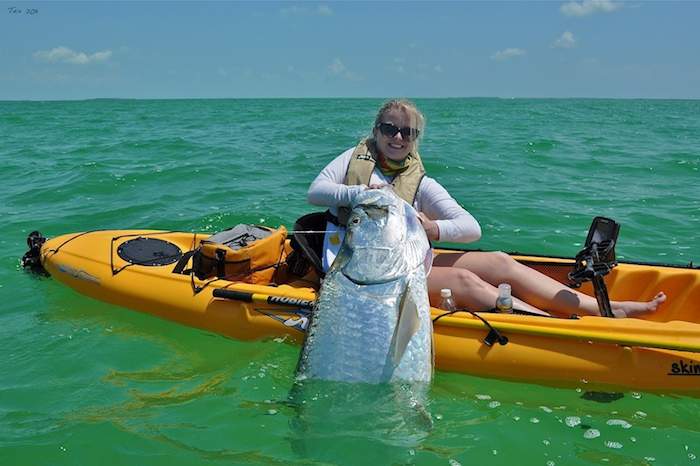 Florida has long been known for their healthy Tarpon stocks. This in return is also why the Keys hold a year-around population of Great Hammerheads that oftten feed on these giants. Just be alert when in the kayak and on the water. Kayaking is a growing sport. For angling, it is an easy way to seek and stalk fish without having the harsh payments of fuel for a boat. Great freedom and the ultimate stealthiness reward those.

There are many area's along the Gulf and Atlantic that can accomodate kayakers. Despite being in the United States, the climate of the Keys is defined as tropical. The stable weather and water conditions help provide year-around habit for bait and predators as such. If you are feeling froggy, take your next adventure to the water to target your local species... you never know, you may just unexpectedly hook into the fish of a lifetime.

Thanks to Christopher Lewis for sharing his great adventure with the Waterman's Journal. 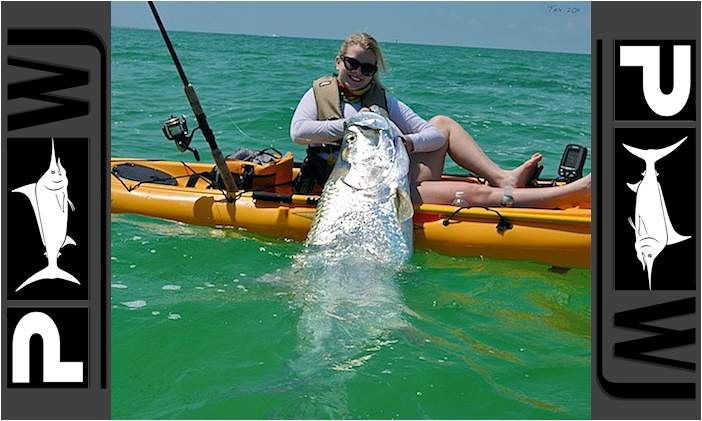 Some relevant info may have been sourced from * Wikipedia**