A Look into the Monsters of the Inshore World

The Waterman's Journal is always on the look out for the anglers and adventurers alike that provide us with stories and pictures that consistently keep you in awe. Thanks to the FlyCastaway crew, we are able to explore some of the great inshore predators found around the world's shallows. Even after landing, the desolation is quite present in these exotic locations. The FlyCastaway boys are chartered off by boat to some of the most epic and virgin waters. It is in these precise locations that their dreams come true and their fly fishing battles become a reality. We are thankful to have them display to us some of the great marine life in their fullest natural beauty. 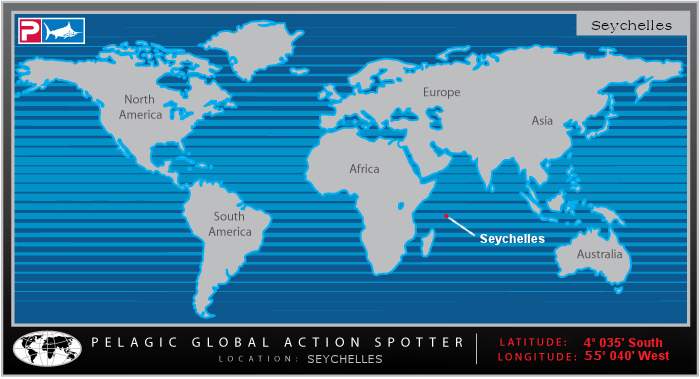 Nearly a thousand miles east of Africa, deep in the Indian Ocean lies one of the ocean's greatest gifts for shallow water fishermen. It is the Island Nation known simply as the Seychelles . The shallow waters and flats around these atolls are truly a haven for a grand variety of species, both ferocious and beautiful. Ultra Clear waters provide superior and unlimited potential on the flats. The abundance of predators on isolated islands like the Seychelles is what shallow water fishing is all about...

Below: Hooked up on a screaming Trevally 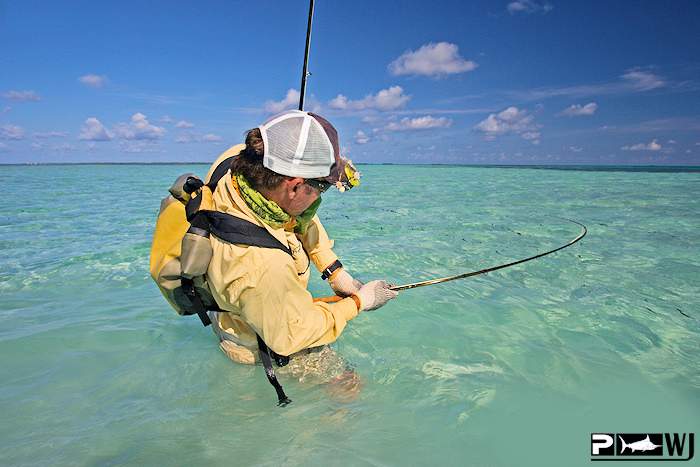 Below: Trevally will provide a fight that pound for pound rivals anything you will ever encounter on the fly rod. 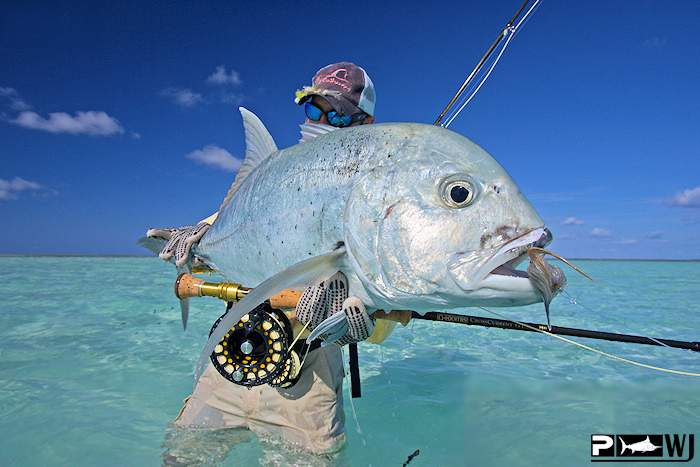 The Seychelles hold a great variety of predators. While Monster Giant Trevally like such are often present, it is highly likely that you will encounter the thrills associated with being hooked up on a big Trophy Bone , a Thundering Permit , or an Exotic Trigger. Also, Milkfish which are the giant cousin of the Bonefish, roam the flats and are one of the more elusive species to take a fly. Fortunately the crew of FlyCastaway have it down to a science. 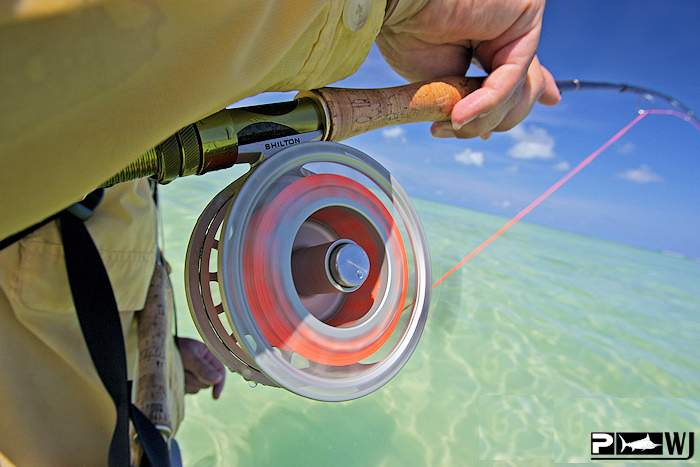 Many large predatory species are present at a single time on these shallow flats and reefs. Permit , the Grander Relative of the Pompano, is a superb fighter found only in tropical waters and will often be thrown in the mix while seeking a Milkfish or Trevally. But these boys are strictly focused on one thing, hammering down on a Trevally on a fly. This may be perhaps one of the best shallow water fights you can possibly ask for. They will test your tackle to the fullest, and more importantly test your patience and commitment to even get one of these beasts to suck down a fly.

Below: A Photo of a lifetime on the flats of the Seychelle Islands ... 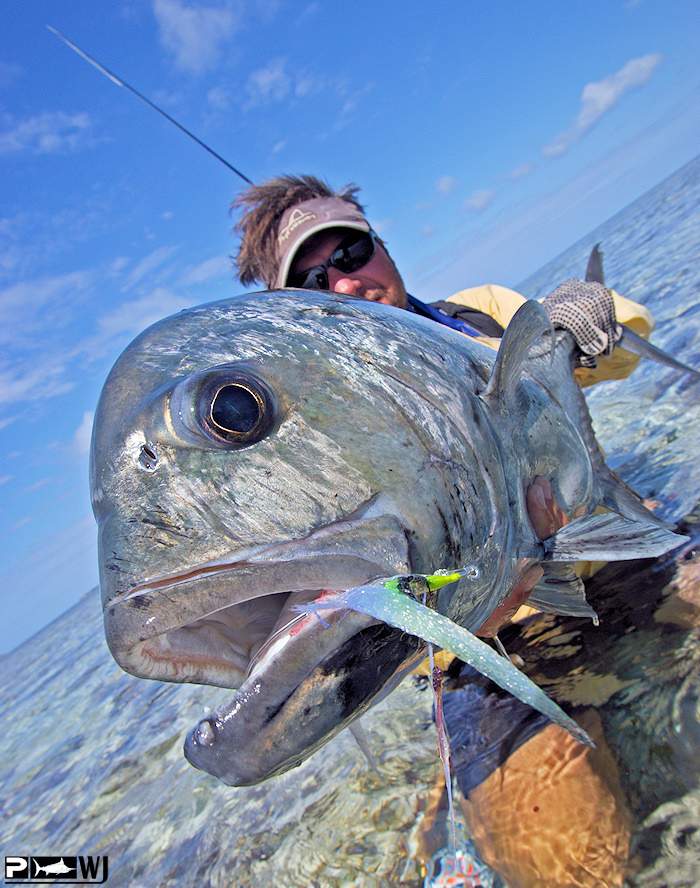 The Seychelles are an incredible place for anlgers of all types and interest. There are inshore species here to suit your every needs. The hardest part simply is just getting there. However, if you are willing to make the epic journey to this Indian Ocean oasis, you may likely be rewarded with the most awesome catches imaginable. Whether you are seeking crunching Parrotfish or the almighty Trevally species, the Seychelles is a place to certainly keep in mind and if you have the opportunity, do not pass it up!

Below: Hard work pays off and the rare catches of a Trevally on a fly is an impressive accomplishment 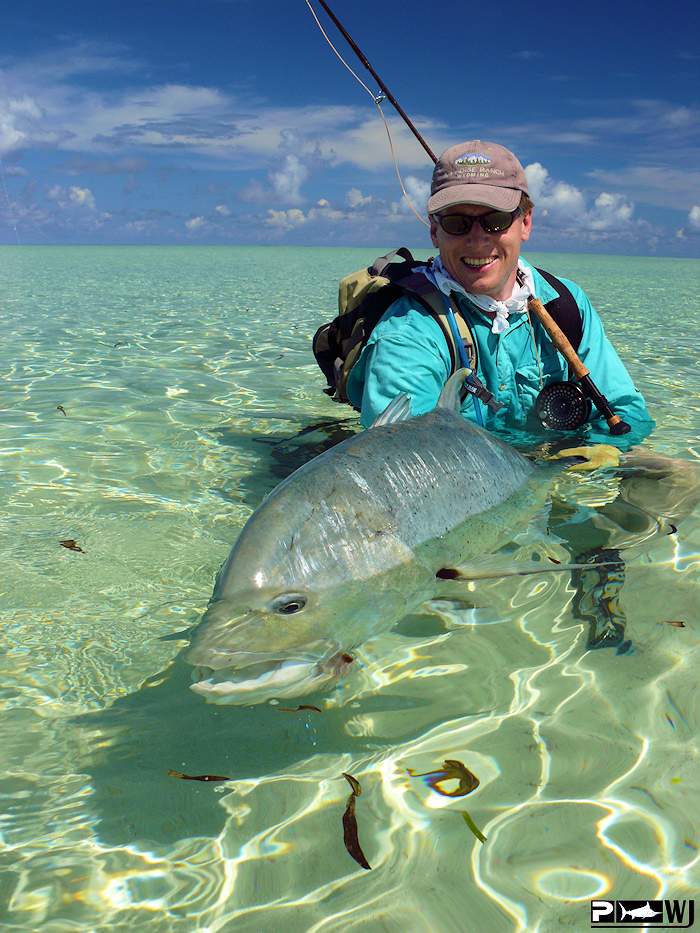 Join us for our next look at some of the Worlds Inshore Monsters as the FlyCastaway crew leads us to Angola... 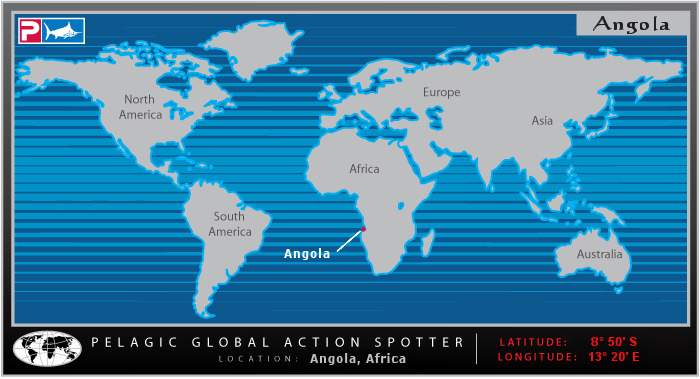 In South-Central Africa where the Atlantic Ocean meets the coast reside the Republic of Angola . The coastal habitat present allows for a great variety of Pelagic and non-Pelagic fish along its great coast. Large beautiful Dorado and vicious Silver King Tarpon can easily be caught in the same day. Overall these waters contain a fantastic fishery, despite mass commercial fishing both foreign and domestic. The inshore fishery here is like no other and remains on the top secret locations in the world for Tarpon.

Thus the FlyCastaway crew travels to Angola to claim their focus on GIANT TARPON .

Below: Hooking up on an inshore Silver King aka Tarpon . 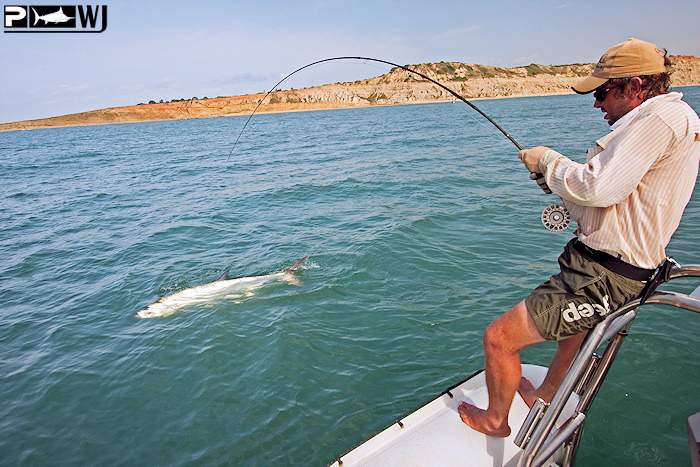 Many people fish the coast of Africa for their chance at some monster Blue Marlin. Aside from the great Pelagic fishery consisting of Dorado and other vicious predators, the inshore waters off Angola provide another treat for thrill seeking fishermen. It may be one of the worlds best kept secrets but truth is Angola has a superb Tarpon fishery. Tarpon are often found crusing the southern Atlantic and make their way along the nearby coast. With great weather conditions, it provides a fantastic opportunity at targeting these silver kings on the fly. It is here that the Flycastaway crew explores and combats in a new battle.

Below: Tarpon are undisputed warriors of the inshore realm and will put on an aerial show... 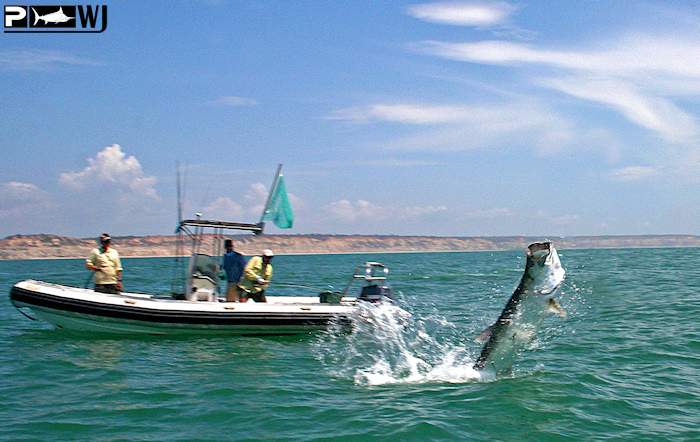 Below: A monster Tarpon is hoisted for a quick photo... 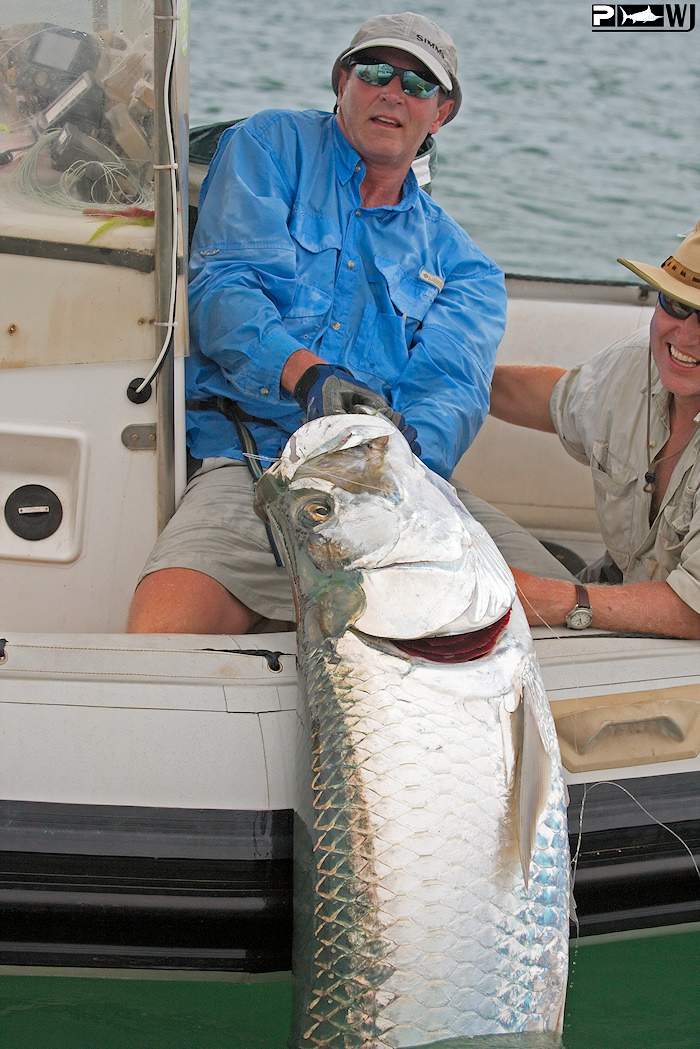 Angola is truly unique in it's coastal structure and marine habitat. A great variety of gamefish can all be found off the coast and the dreams of the angler can be reality if an individual takes a long journey to this pristine fishing location.

Below: A Tarpon fell prey to a fly on a sandy beach in Angola ... 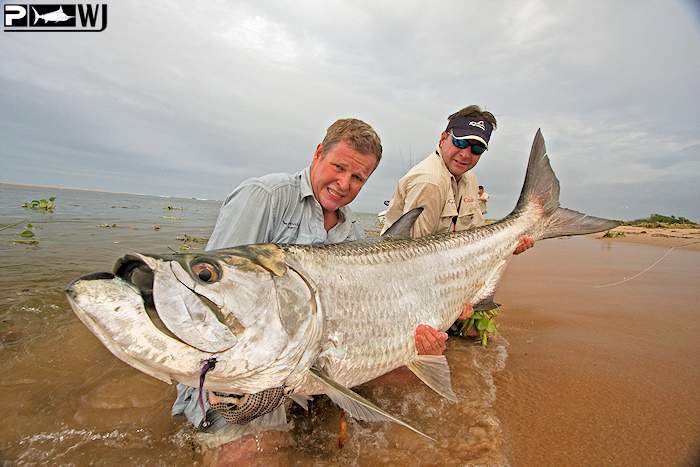 The FlyCastaway guys are highly regarded at some of the best at what they do. It is a great honor to have them share their adventures with the Waterman's Journal bring to life some the inshore monsters that hardcore anglers could only dream of. You may visit the crew at Flycastaway.com for more info on these exotic locations and/or contact them for a possible trip.

Below: Perseverance pays off and another Trophy Tarpon is landed and released. 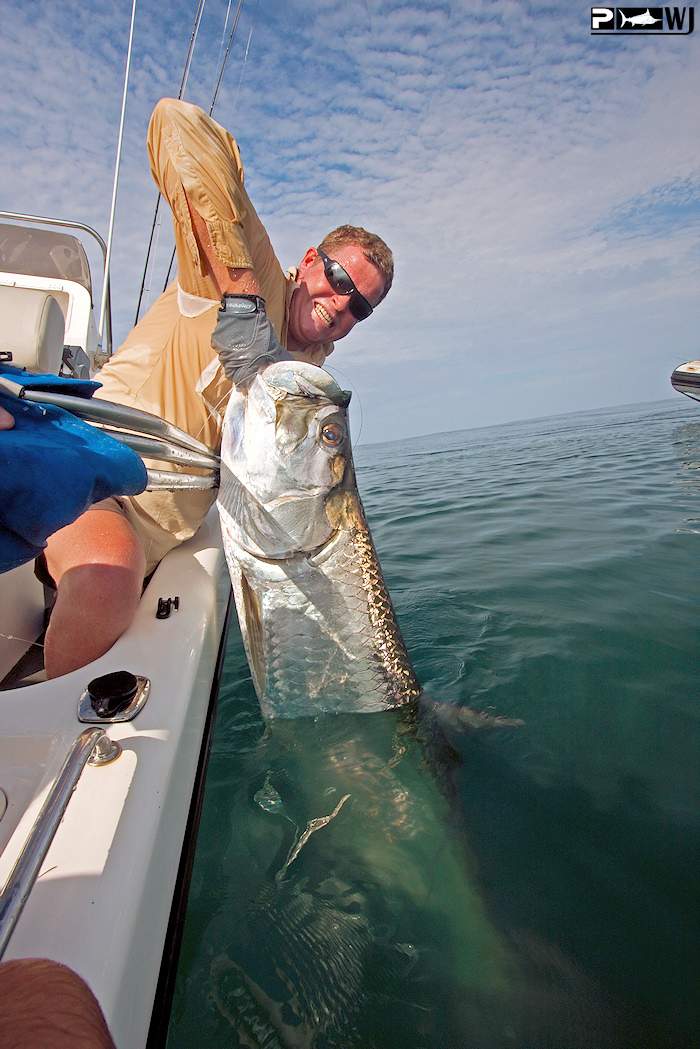