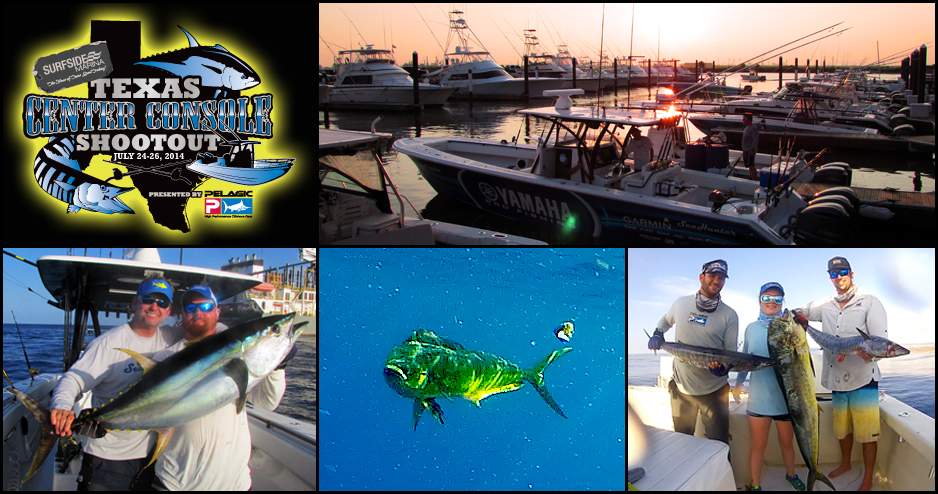 A battalion of 15 teams headed out under the stars onto a flat calm Gulf of Mexico; it was the morning of Friday, July 25th, 2014. Each had one thing on their minds – win the 2nd Annual Texas Center Console Shootout presented by Pelagic.

Departing from Surfside Marina, neighbor of Freeport, TX, the high-speed center console vessels raced far offshore where blue water beckoned. Some teams started on an impressive current rip some 80-miles out, which had gathered a healthy weed line – a prime starting point to kick-off the tournament. This rip, as well as a few others, proved to be a critical factor in pinpointing the target species – wahoo, dorado, and tuna. A few feisty blue marlin were also hooked and release here.

The tournament offered one point per pound of each team’s single-heaviest tuna, wahoo, or dorado. If each species was scored, that team was awarded the “Gulf Slam Bonus” of 100 points. The potential for bonus points encouraged the field to spend time targeting the various gamefish, as opposed to solely concentrating on one particular species. The general tournament awarded first, second, and third place; there was also optional jackpots for each species – winner take all for single-heaviest fish per category.

While most wahoo and dorado were caught along the aforementioned weed lines, the majority of tuna were found at the various oil platforms that dot the gulf. This author fished aboard the 37’ SeaHunter Papotanic with Pelagic Pro Team Captain, Bill Platt, who opted to run the distance to drillship, Discover India , where reports of great fishing for large yellowfin tuna was being had. Joining us aboard was Captain Johnny Walker, Captain Joey Austin, Jose Reyes, and Scott Bradley. Hungry yellowfin bit starting from late afternoon and throughout the night on various offerings – live bait, chunk bait, poppers, butterfly jigs – and we were able to load up on hefty 40-65 pound tuna.

In the end, after the final weigh-in at Surfside Marina on Saturday, July 26th, it was the team aboard Tenacious taking home the 2014 TCCS title with the most aggregate points of 192. These guys also landed the tournament’s biggest fish, a solid 67-pound yellowfin which earned them the tuna jackpot. Their total payout rang the bell at $11,387.00.

Overall, a great event! A fun group of participants and a welcoming atmosphere combined with gorgeous weather, calm seas, and biting fish made for a quality tournament in the Gulf. If you couldn’t make it this year, plan on joining us next summer for the 3rd Annual Texas Center Console Shootout presented by Pelagic… We’ll see you there!