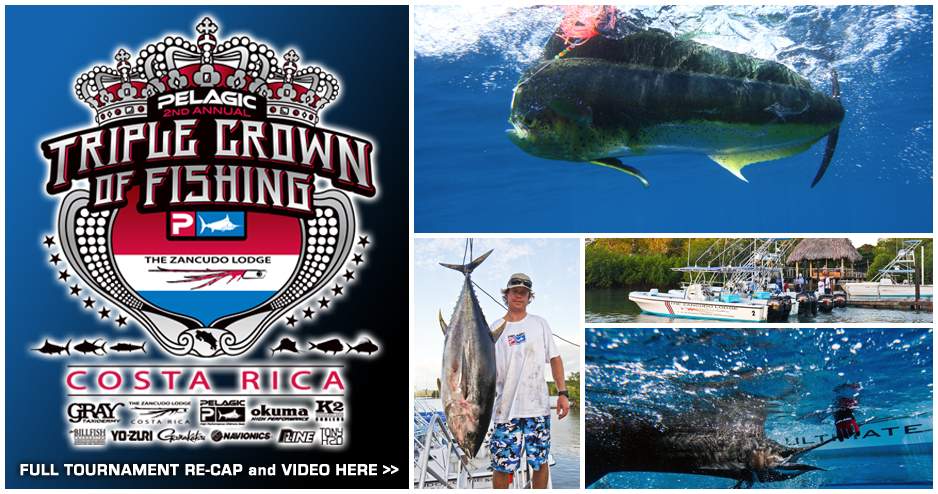 On January 21st, 2013, Pelagic wrapped up another successful tournament, hosted by the famed Zancudo Lodge, Costa Rica. Located on the beautiful southern Pacific side of the Central American country, near the town of Golfito in Gulfo de Dulce, the lodge sits in a perfect setting where anglers can easily fish and have success with both offshore and inshore gamefish species in the same day. Both the location itself, along with a savvy fleet of local captains, made for a competitive three days of tournament action. 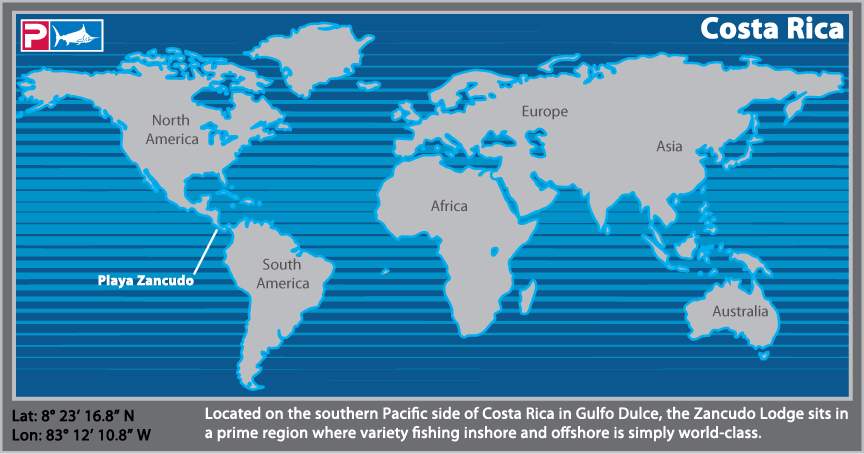 The 2nd Annual Pelagic Triple Crown of Fishing Tournament saw teams from California, Costa Rica, Florida, Maine, Mexico, Nova Scotia, and Texas make the trek to vie for the win and bragging rights as overall Triple Crown Champion. Once again, over $15,000 in cash and prizes were up for grabs, setting the stage for a nail-biting event, especially for those who opted all-in the daily jackpots.

Below: Triple Crown trophies and plaques await this year's winners // Tournament Director, Tony Berkowitz, helps a team sign in for the event. 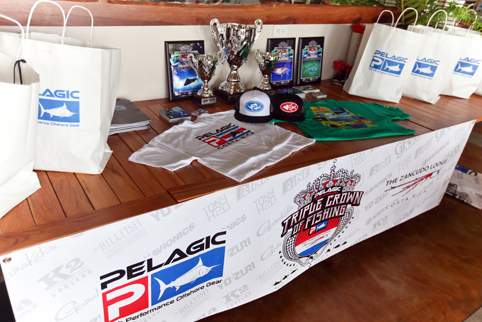 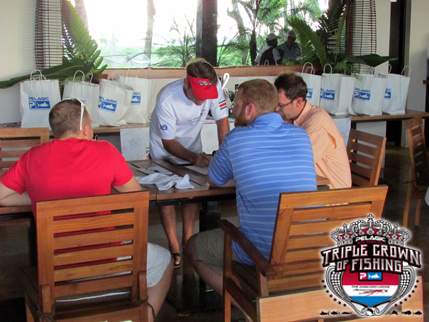 The tournament, held January 19-21, consisted of three divisions – Billfish, Gamefish, and Inshore – where teams scored points per fish caught (or released) in each division daily. The Billfish Division was a release only division where 100 points were scored per sailfish and 350 points per blue, black, or striped marlin. Although, no marlin were scored during the event, teams were able to rack up the points on the plentiful shots at large sailfish to 130-pounds. Tournament MC and official scorer/weighmaster, Tony Berkowitz, awaited teams at the end of each day for photographic evidence of hand on leader or bill of fish.

Below: Steve Dougherty of Florida Sport Fishing Magazine hard bent during day one of the tournament // 100 points - releasing a nice sail. 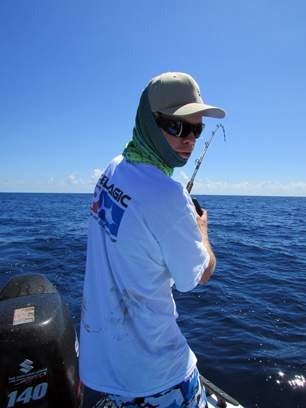 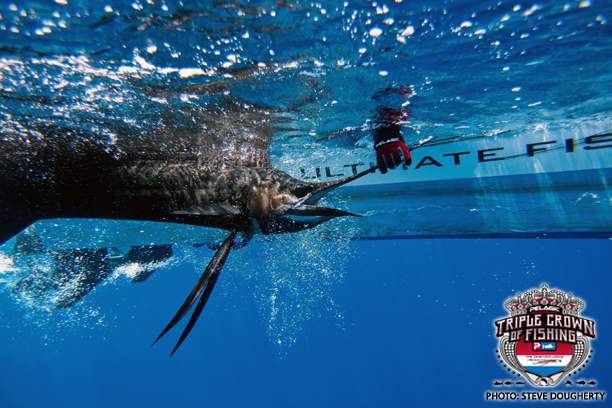 The same rules applied for the Inshore Division – Roosterfish release only – with the difference being that evidence was proven by photo/video of either hand on leader or fish actually in hand. And finally, the Gamefish Division was determined by a team’s single-heaviest tuna, wahoo, or dorado weighed each day, scoring a point per pound plus 150-points.

The fishing was overall sensational this year with quality scores in all divisions on a daily basis. On the first day of fishing, almost every team opted to fish the offshore grounds in hopes of bolstering points in both the billfish and gamefish divisions to start the tournament off on the right foot. Most teams were able to score at least 100 points I the billfish division and weigh-in either a tuna or dorado on the gamefish side of things. Finding a line of debris on a current break offered a good shot at hooking a dorado nearby, while spotting porpoise with birds crashing on bait was a surefire way to engage in battle with tuna in the 100-pound class.

Below: Team Bad Habit all smiles after landing this solid yellowfin // Capt. Elvis brings aboard fish one during a dorado double-header. 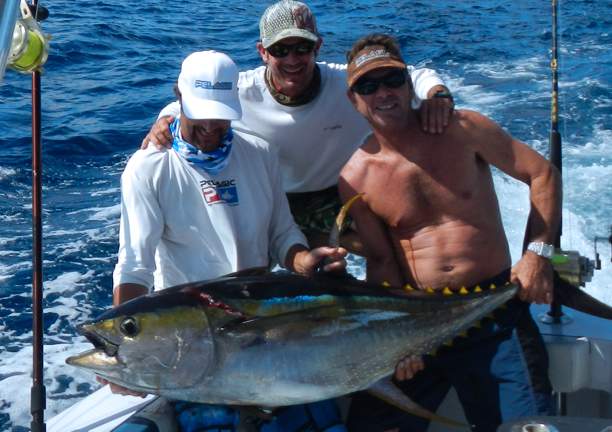 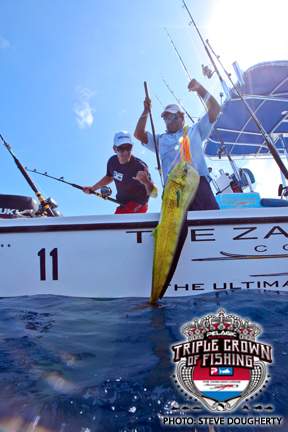 At the end of day one, teams were spread pretty evenly across the board in the two respective offshore divisions. However, since practically all teams focused on bluewater fishing, no Roosterfish were scored, setting up an intriguing day two. The daily jackpot for the Inshore Division rolled over, causing many teams to spend at least half of the day fishing the beach for Roosterfish.

Day two proved to be “moving day” of the tournament, with a few teams significantly separating themselves from the pack. High roller of the day was Team Bad Habit who took home the Inshore Division double daily jackpot with eight roosterfish, and also managed to swing outside to release a sailfish and pick up an 80-pound yellowfin tuna to weigh. The team accumulated a massive score of roughly 1150 points for the day, putting them in a significant lead going into the third and final day of the event.

With day two in the books, teams began scheming on how they would spend the final tournament day of fishing. The eight-roosterfish day put up by Team Bad Habit got a lot of people excited about the prospects of scoring big points inshore. The morning hours on the final day saw roughly half the fleet tucked in along the beach, slow-trolling baits and casting poppers in hopes scoring Inshore Division points.

Below: Team Triple J weighs in a plump ahi // Colin Sarfeh of Team Young Gunz releases a roosterfish for 100 points. 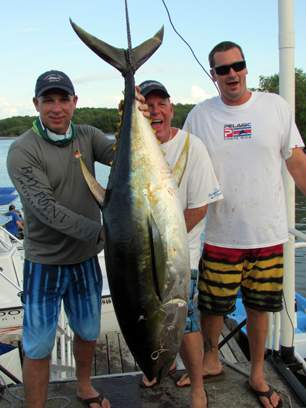 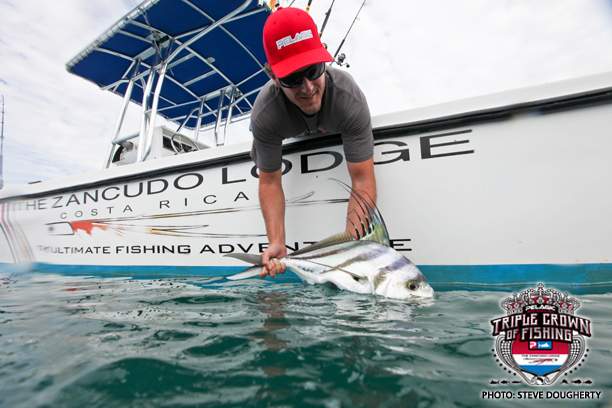 It’s funny how tournaments can sometimes play out. The first two days of fishing saw most teams spend their days marauding the offshore waters to gain points in the Billfish and Gamefish Divisions. But, when it came down to it, it was the neglected Inshore Division that catapulted a few teams into the winner’s circle.

Coming in third place overall was Team Young Gunz, consisting of Florida Sport Fishing Magazine’s, Steve Dougherty, and Colin Sarfeh of Pelagic Gear. Consistency was the name of the game for YG, as they were able to post solid scores in all divisions over the three-day tournament.

Below: Team Young Gunz with Captain Elvis and the third place trophy // Steve Dougherty with a good-sized dorado. 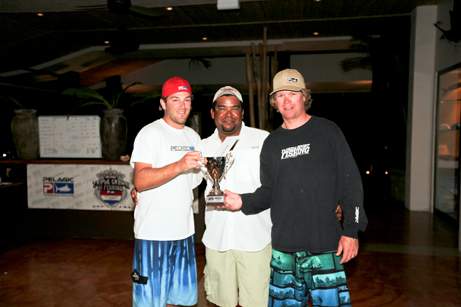 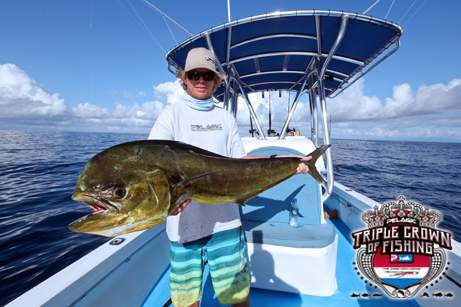 Placing second overall, with their monster day two performance and first place Gamefish Division finish, was Team Bad Habit. Their 99-pound yellowfin tuna was the biggest fish to hit the scales throughout the event.

Team representative, Ron Kawaja, when asked about the tournament, stated, “Absolutely phenomenal fishing both inshore and offshore. There were wolfpacks of roosters all along the beach, and sailfish, tuna, and dorado were fairly thick on the outside.” 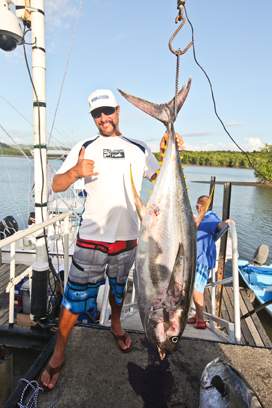 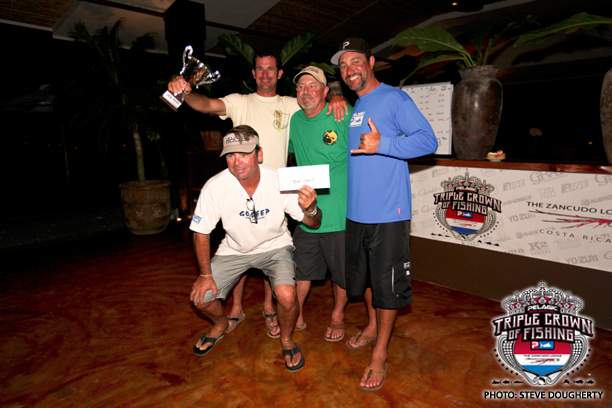 And coming from behind to win it all was Team Blackhawk. Gregg Muffson and Bobby Lee pulled it off once again to take home their second consecutive Triple Crown Championship. Having scored good numbers offshore the first two days of fishing, the boys decided to focus their efforts during the final day solely on roosterfish. Their gamble paid off as the team managed to successfully catch and release a staggering twenty-four roosters to leapfrog Team Bad Habit and claim the Triple Crown victory. 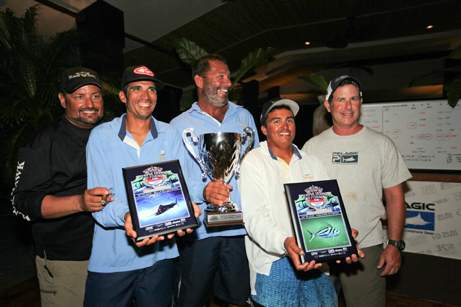 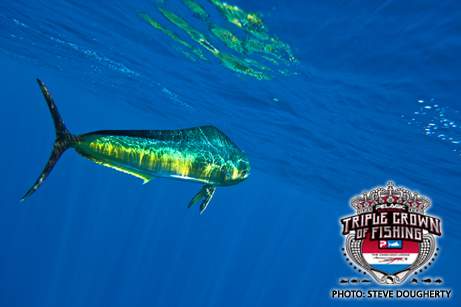 Congrats to all tournament anglers who participated and made the second annual event such a great success. Over the course of three days of fishing there were 33 sailfish released, 46 roosterfish released, 40 tuna caught (13 weighed), and many big dorado to over 30-pounds to add some color.

Thanks again to The Zancudo Lodge for being such a great host for the event. Lodge owners, Gregg and Goldine, have done a beautiful job in creating an environment that is, simply put, a fisherman’s paradise. We can’t wait to do it again next year.

If you are interested in booking your trip of a lifetime to Costa Rica, look no further than The Zancudo Lodge. www.ZancudoLodge.com