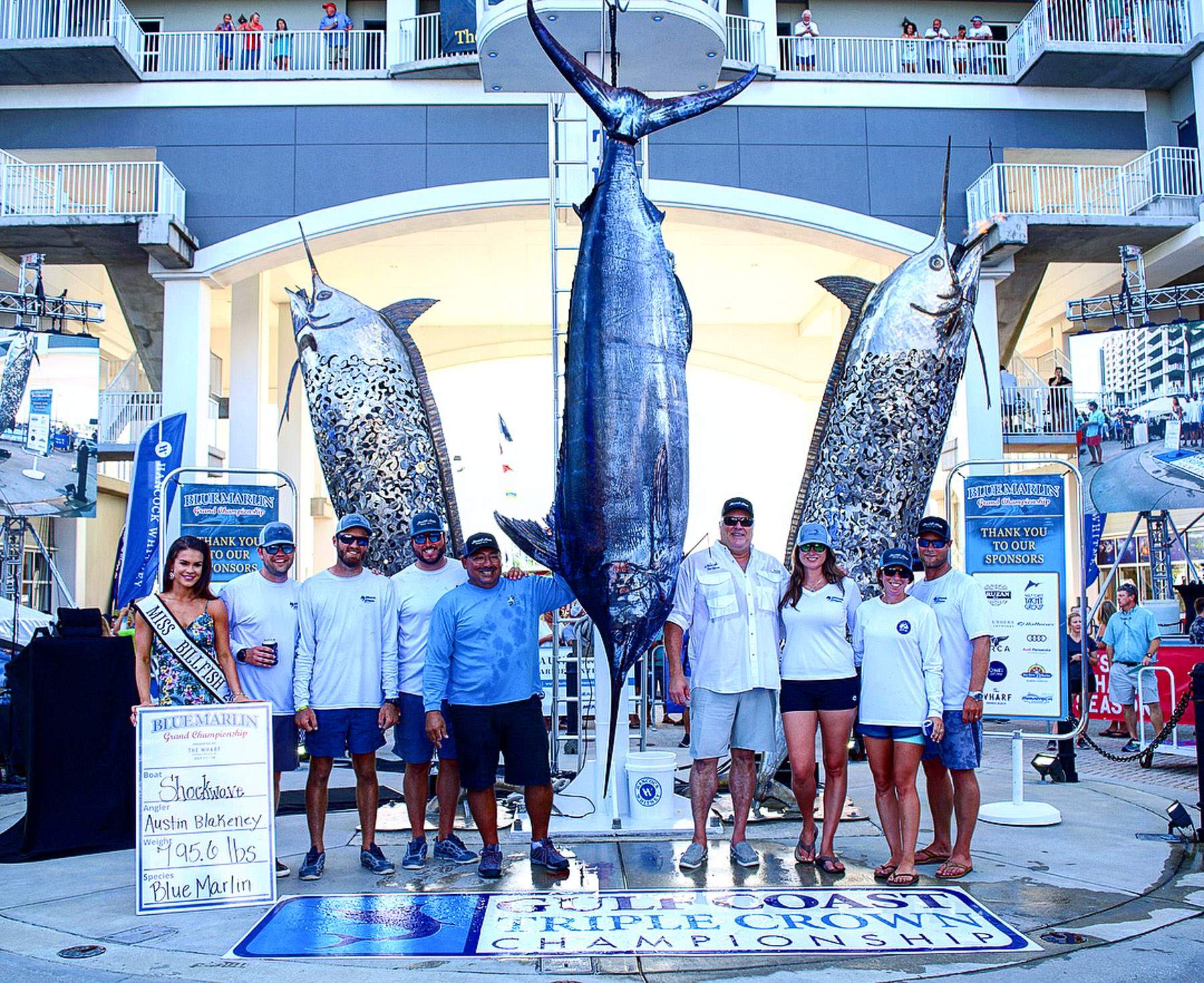 As anticipated, the 2018 Blue Marlin Grand Championship of the Gulf, lived up to it’s mantra - “The Greatest Show in Sportsfishing”. Headquartered at The Wharf in Orange Beach, Alabama from July 10-15, 2018, this years event featured a record $1.88 Million overall purse and a red hot Blue Marlin bite. In the end, a total of 6 Blue Marlin were brought to the scales resulting in perennial contender, Done Deal, being edged out by a massive 795.6-lb Blue brought in by event champion, Shockwave . 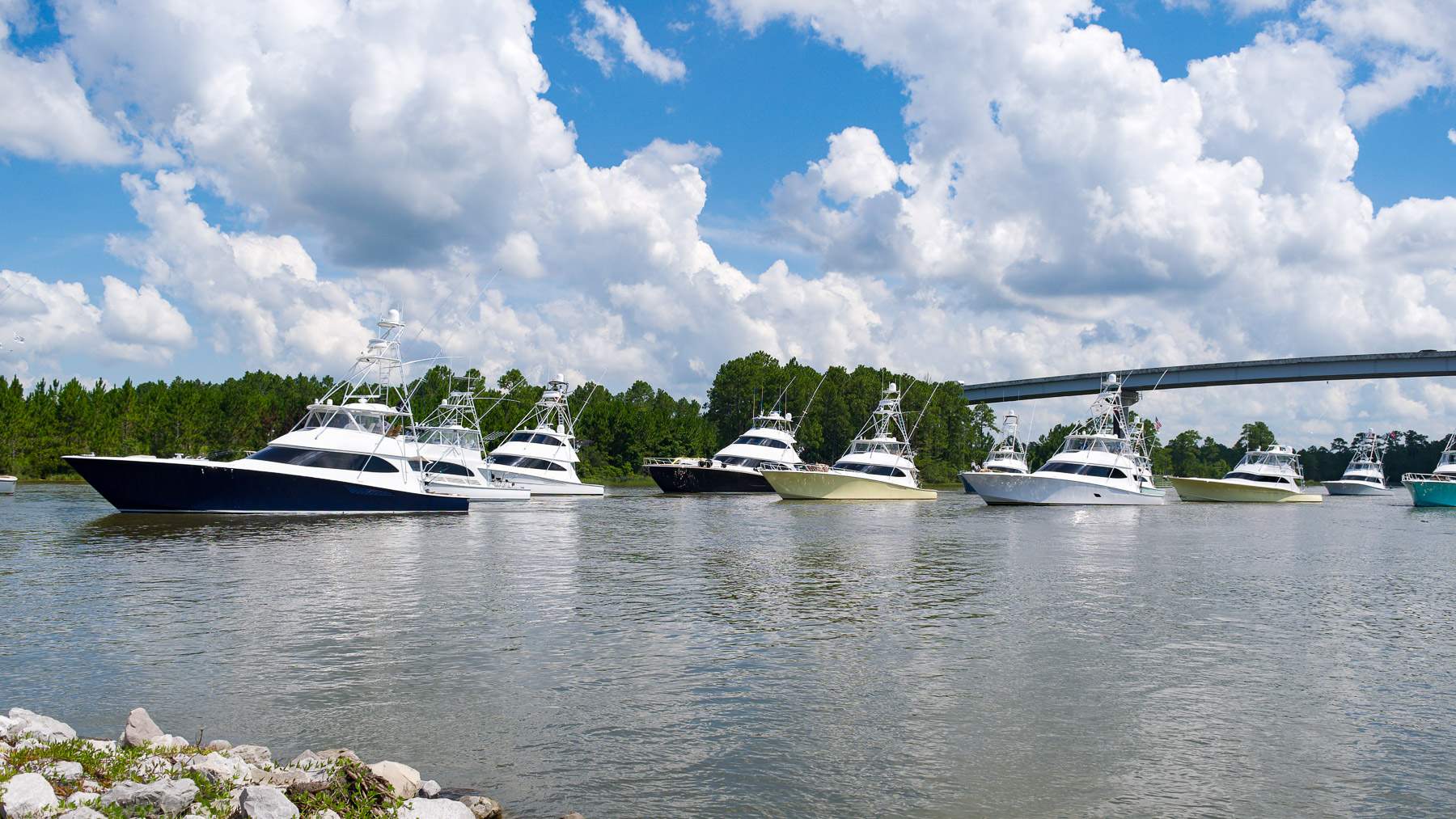 The 11:00am BMGC Boat Fleet Departure is truly an amazing spectacle. 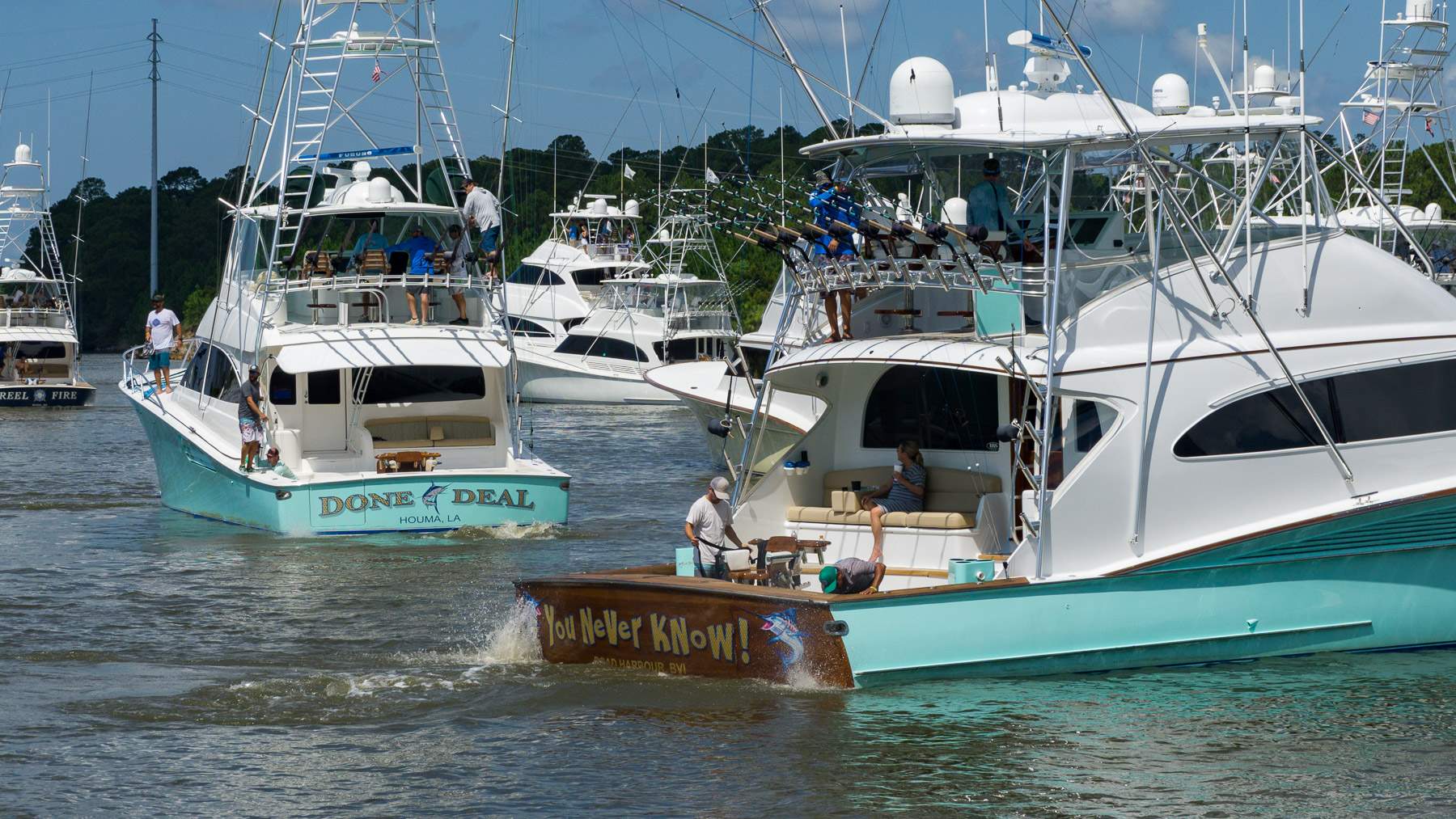 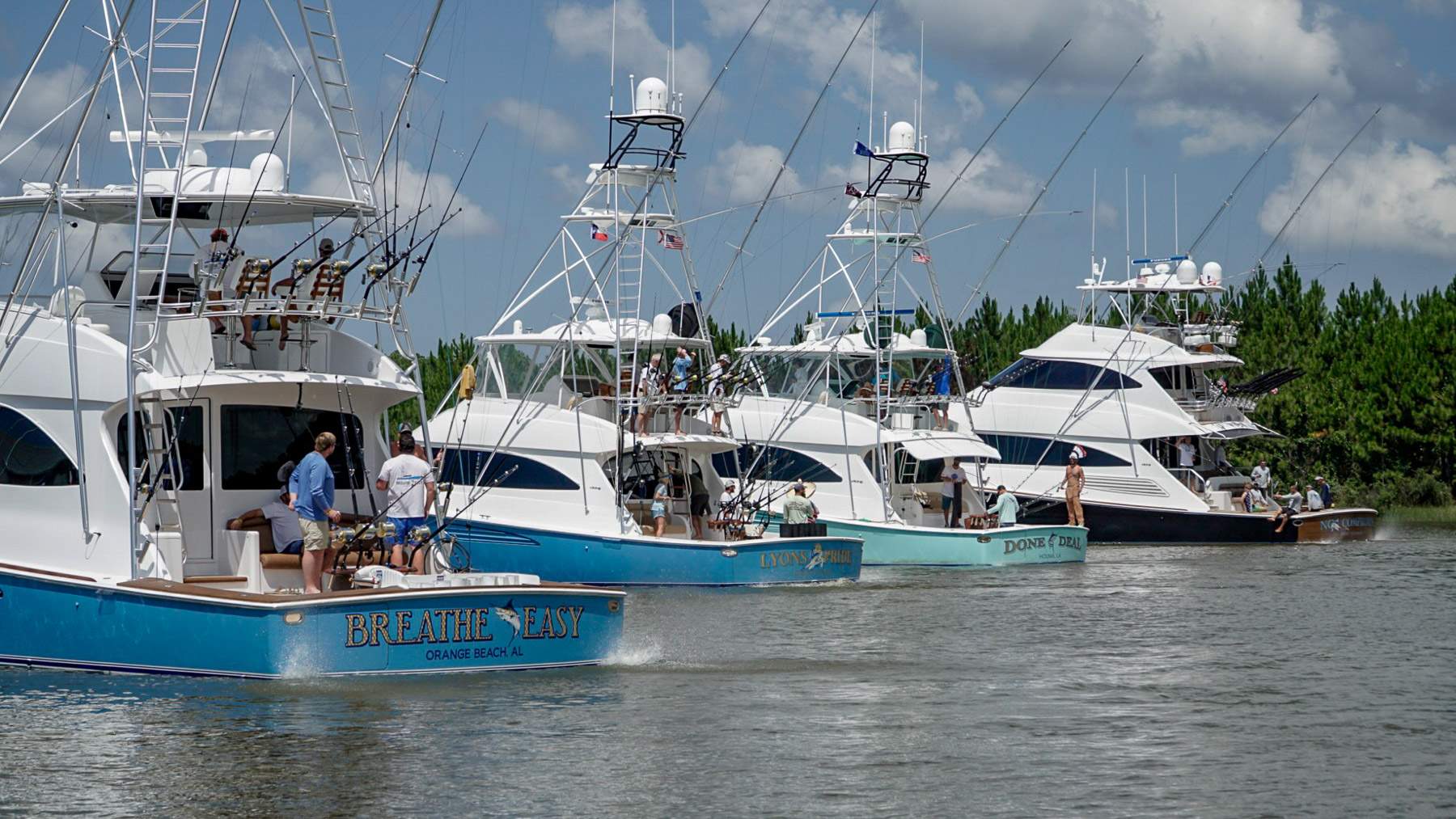 It's all hands on deck as the fleet departs for potentially 2 overnights on the water. 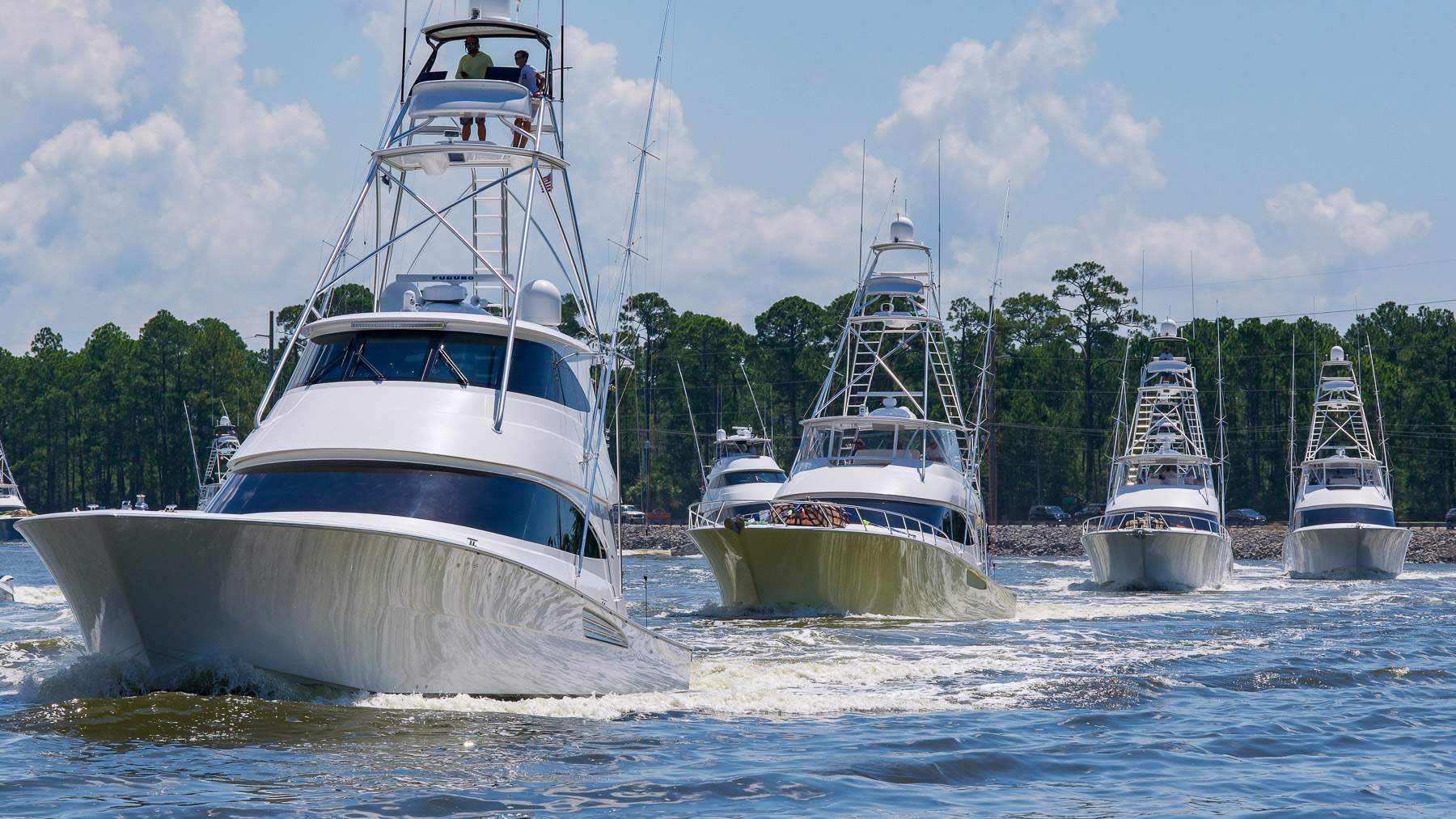 Some of the finest boats in the world marching through Portage Creek towards the Gulf.

As a proud Sponsor, going on our 5th year as the BMGC Official Outfitter, we couldn’t be more pleased with the venue, tournament administration team, and our fine retail partner, The Wharf Outfitters. From the top down, the entire BMGC production is top notch and a must see event for any die hard sportfishing fan. For those unable to attend in person, the event streamed live on the BMGC website and aired on NBC to millions of homes in the Southeast. With out a doubt, the fire breathing marlin added an exciting touch to the Greatest Show in Sportsfishing. 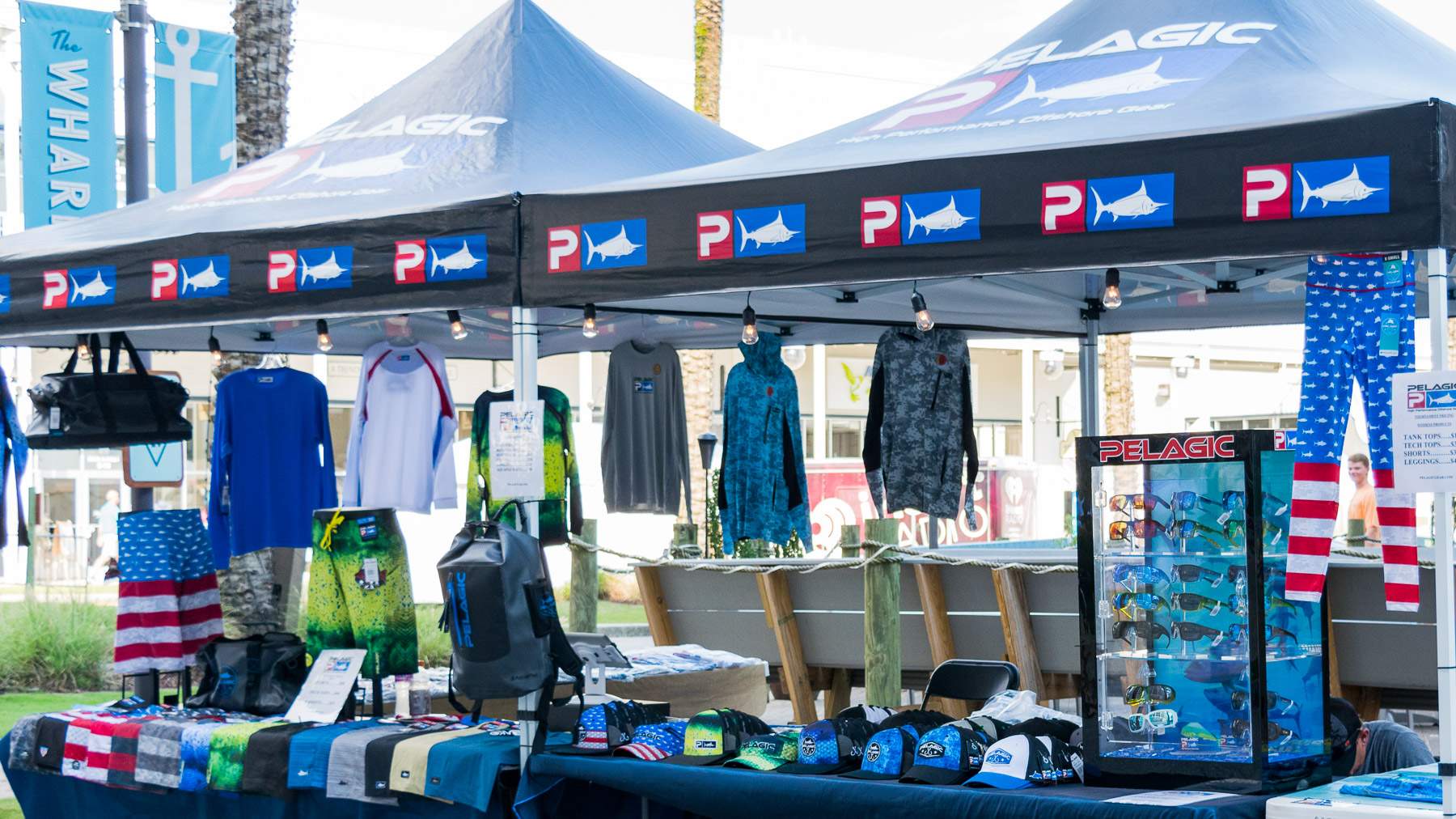 No place we'd rather be. Thanks to the Wharf Outfitters and BMGC crew for the hospitality. 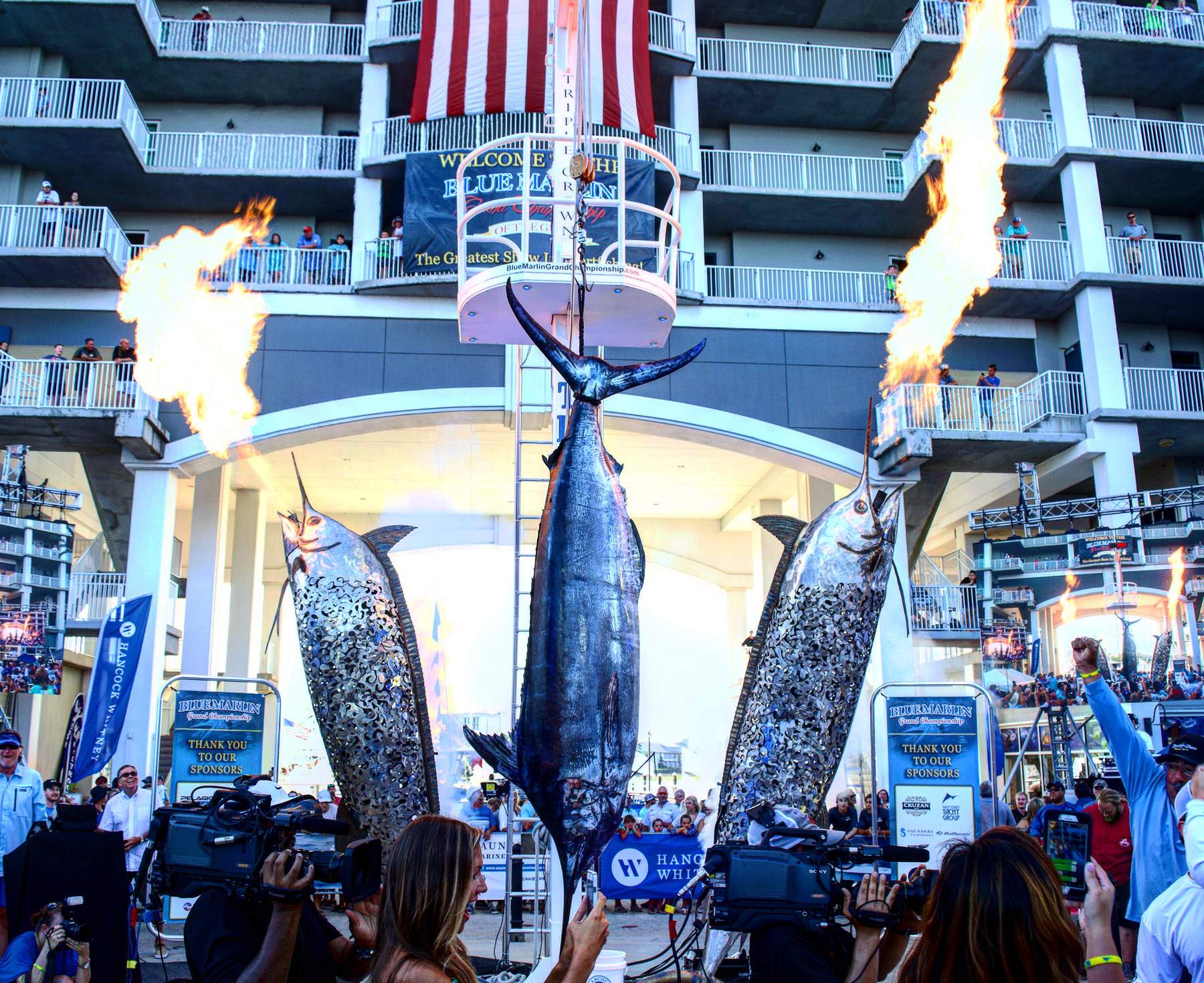 The 2018 production was second to none. Cue the fire spitting marlins.

Despite settling for 2nd Place in the Blue Marlin category, Done Deal , had a lot more to celebrate. Their first place finish in the Release Division coupled with the 2nd Place Blue Marlin garnered Capt. Jason Buck and crew the event's largest payout of $612,000.00. If that wasn’t enough, their 2018 BMGC performance secured them the 2018 Gulf Coast Triple Crown Championship. In addition, the feel good story of the event was Done Deal’s 640.8-lb Blue Marlin caught by Lady Angler Katie Gonsoulin. Katie spent an astonishing eight hours in the fighting chair to land the fish, which had the leader wrapped around its dorsal fin. The epic fight also landed Katie the Top Lady Angler Award. 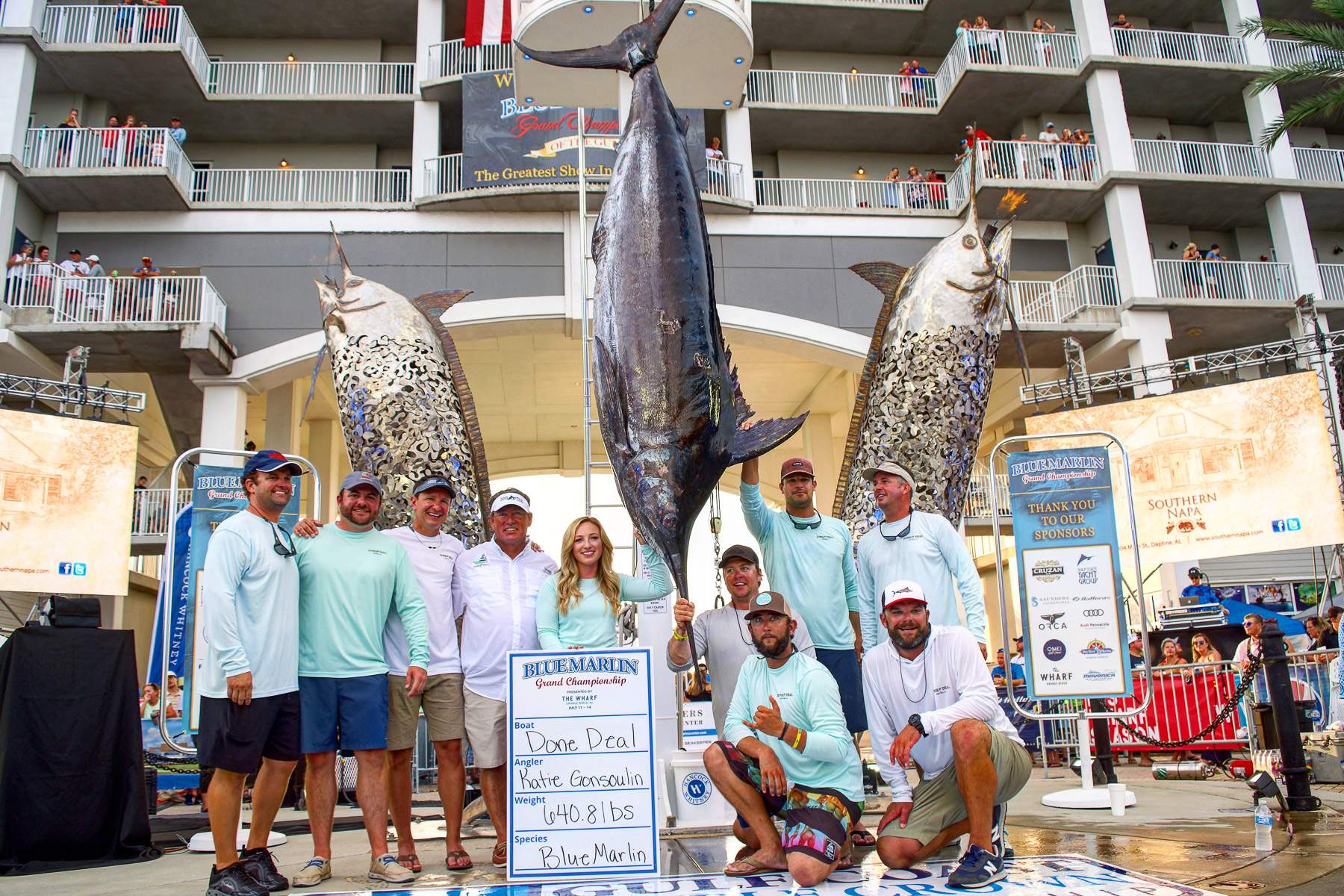 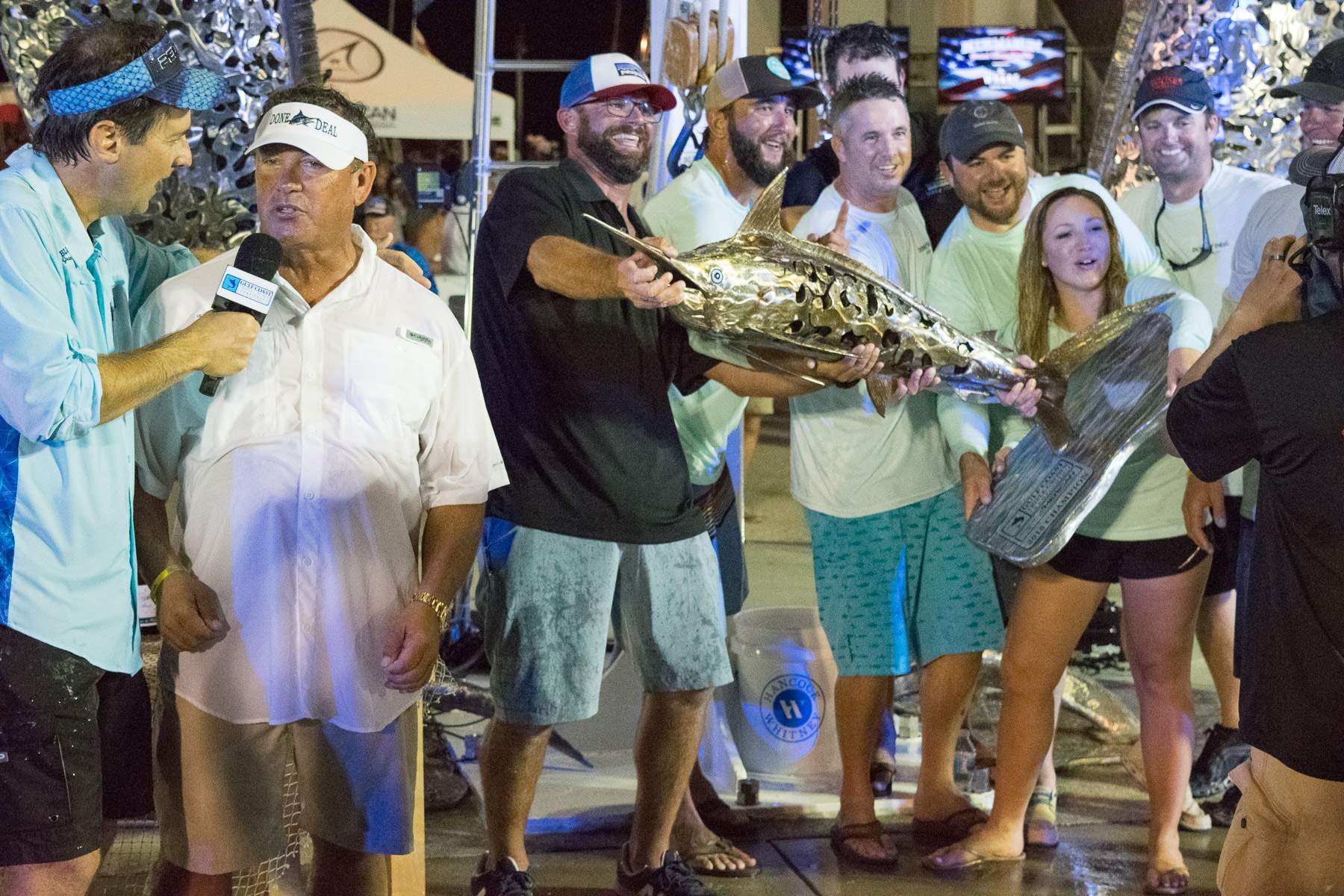 While most BMGC tournament participants and sponsors arrive at The Wharf in Orange Beach early in the week, traditionally it's Wednesday night's Annual Miss Billfish Bikini Competition that officially kicks off the tournament for the public. This year, 9 beautiful contestants battled it out in front of hordes of sportfishing fans. It was a tough night for the judges as the final tally ended in a tie-breaker, but after another run on the catwalk it was the gorgeous Johannh Bosarge who took the 2018 Miss Billfish Crown. 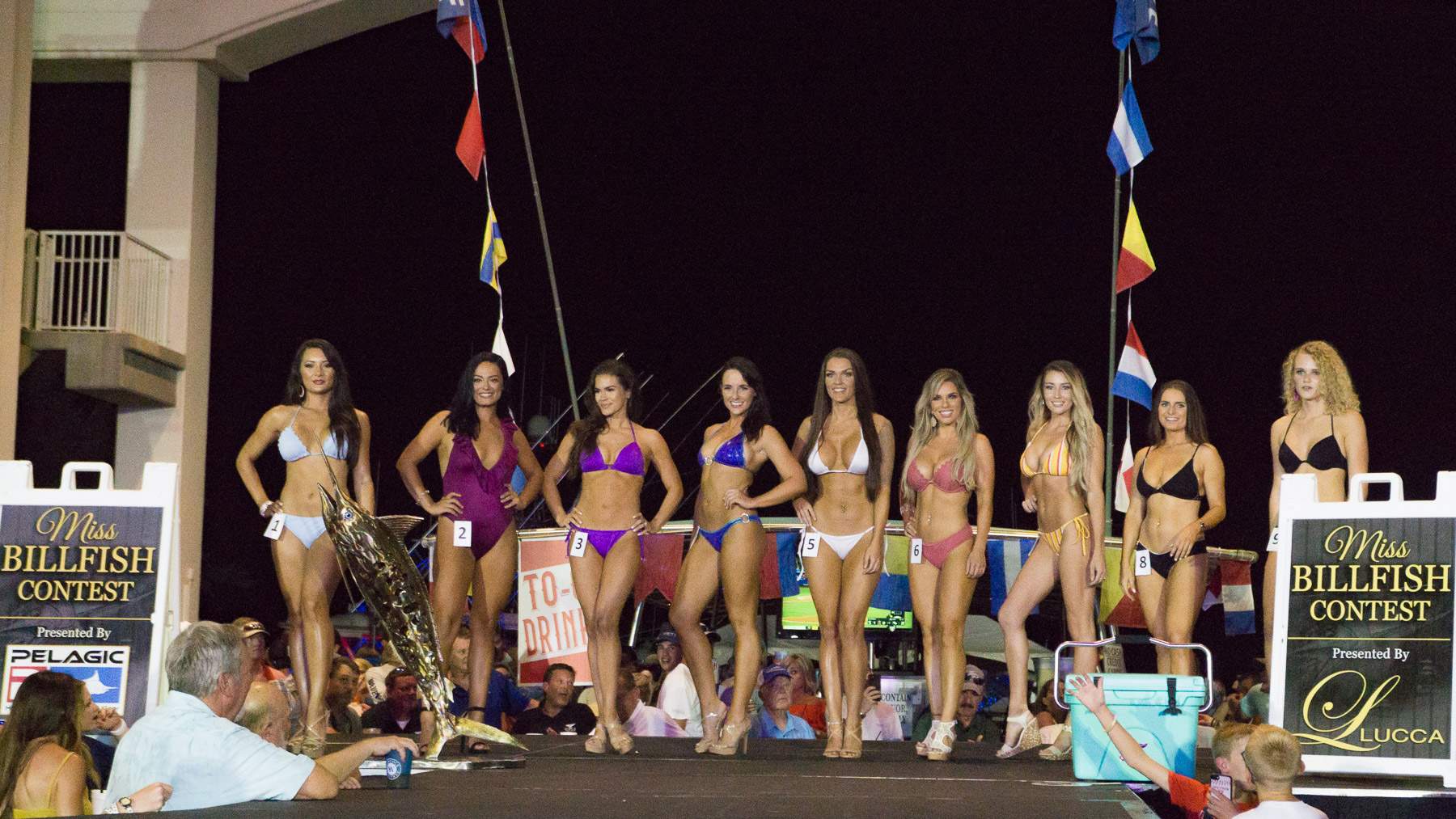 Cleary it was a tough night for the judges... Eeny, meeny, miny, moe! 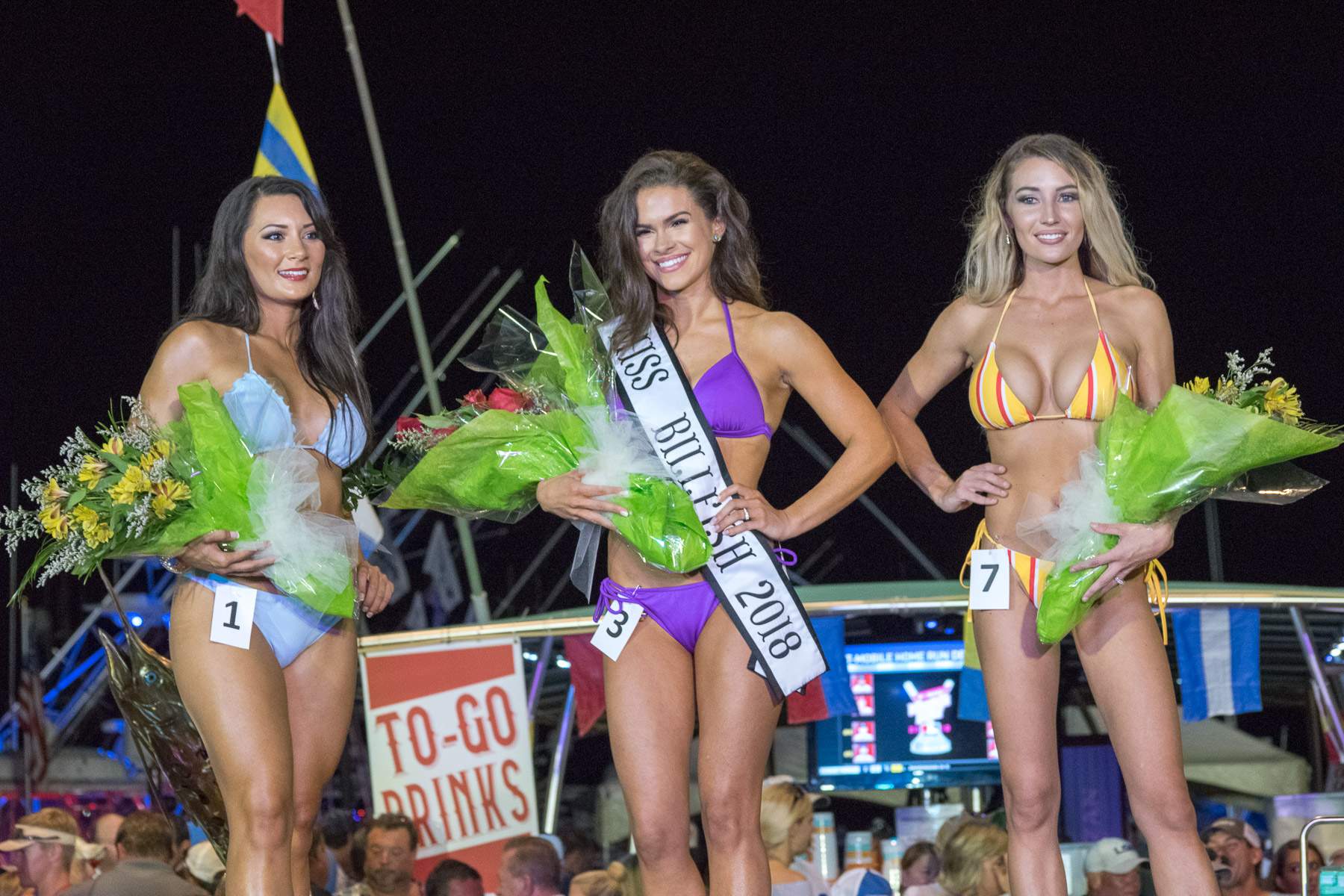 After Thursday’s 11:00am fleet departure the boats ran for hours, some as far as 250 miles out before wetting some lines. As luck would have it, tournament HQ got word that Quick Time boated a blue marlin Thursday evening and were already headed back to the scales for a 7:00am Friday morning weigh-in. 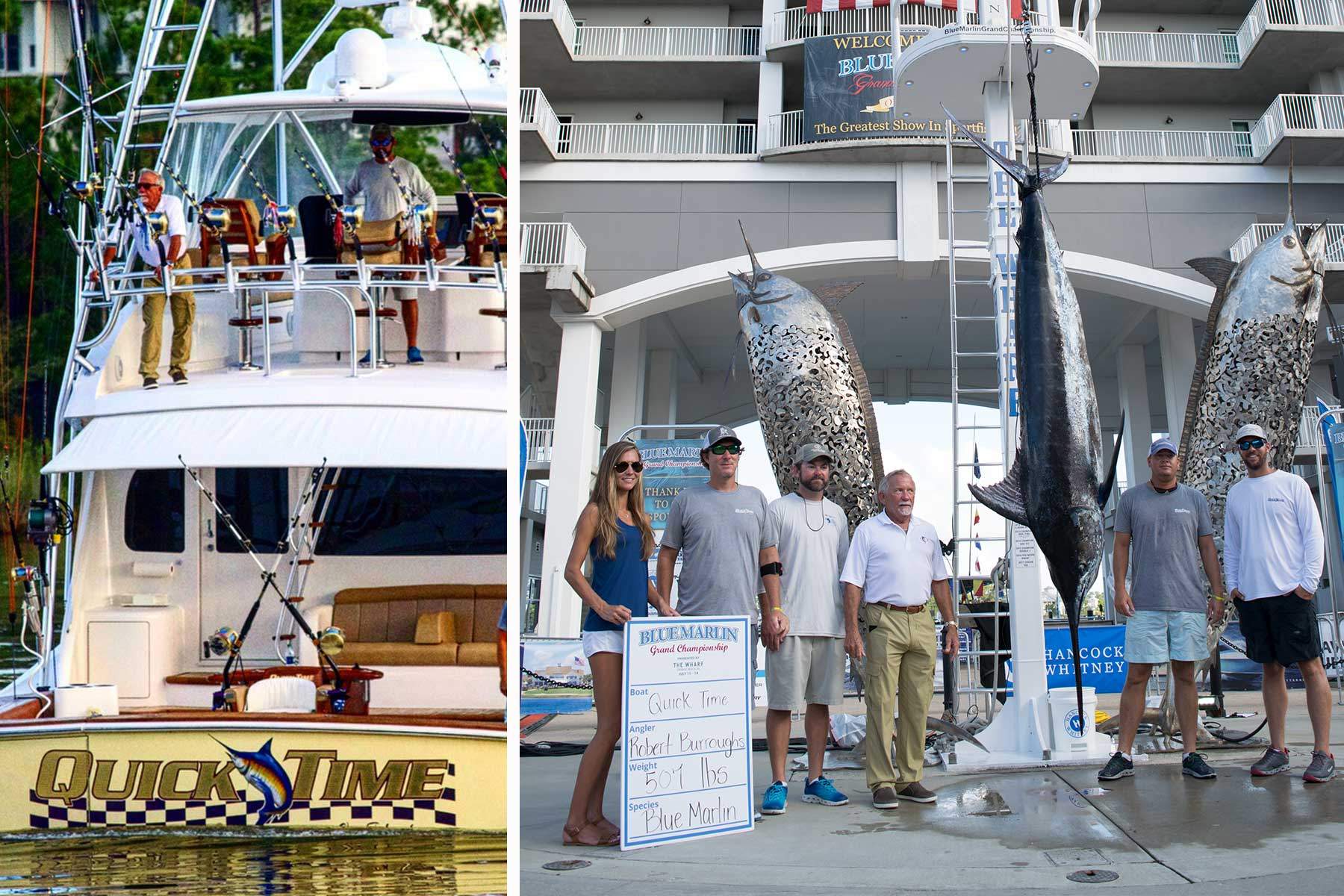 Quck Time backing up to the docks to get the party started with a 507-lb Blue.

By the time Saturday morning came around, you could feel the energy building for the final day's weigh-in. With at least 5 Blue Marlins rumored to be coming to the scales, it was all hands on deck as sportfishing fans began to gather at the Wharf Marina. At 5pm the Greatest Show in Sportsfishing kicked up in fine fashion. 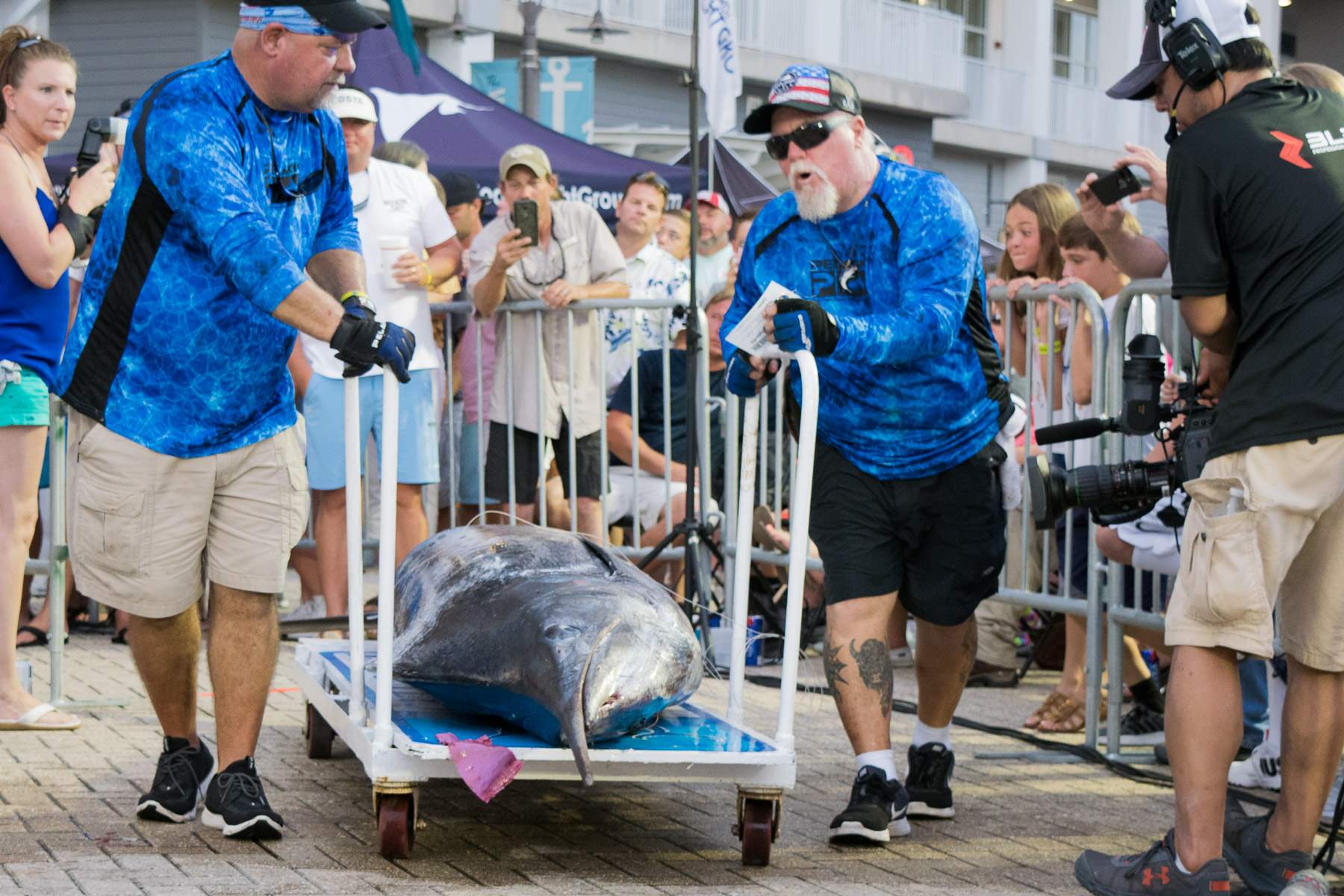 The BMGC Crew, donning Pelagic Vaporteks to combat Alabama's heat and humidity, push in one of the 5 final Day Blues. 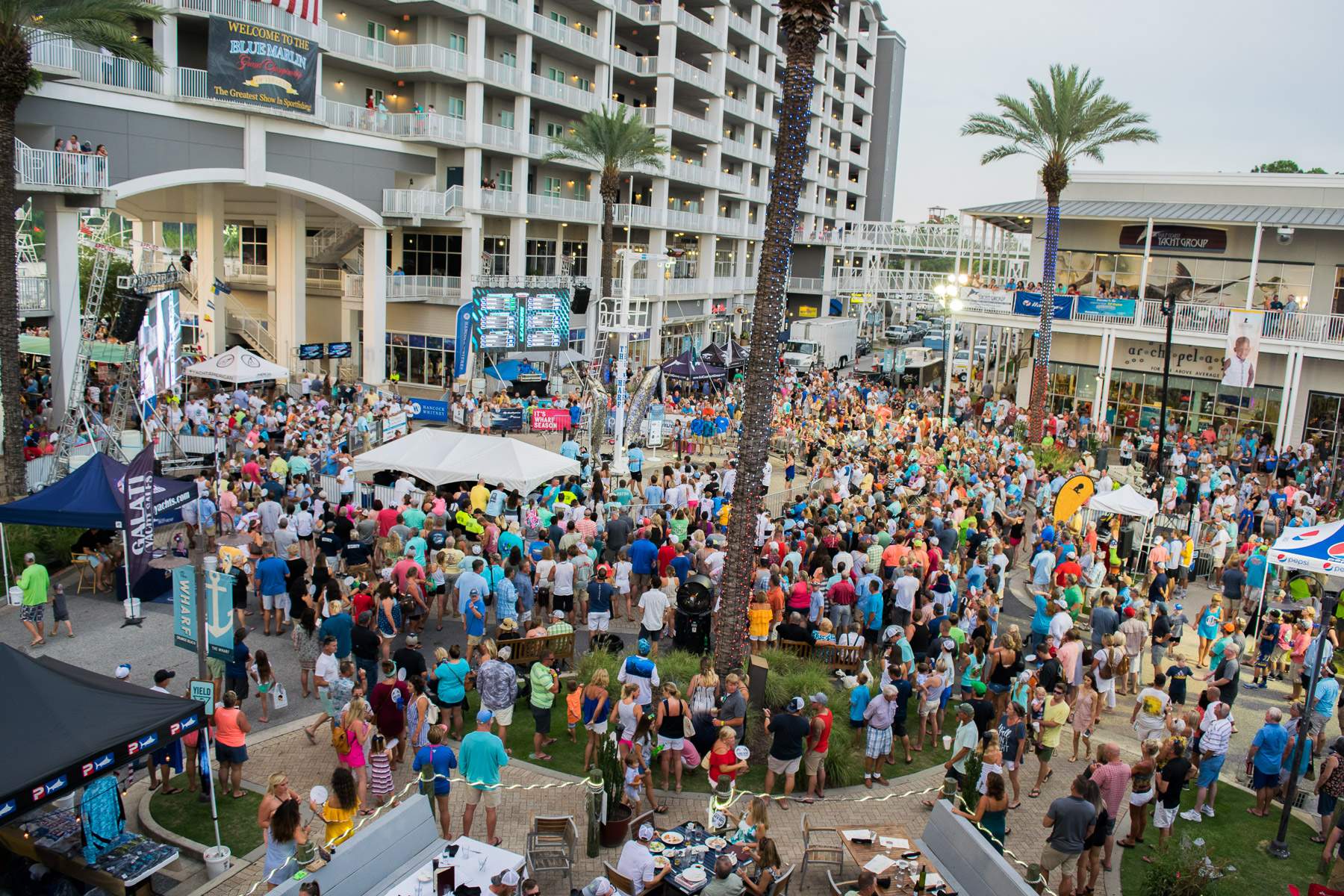 No shortage of Sportfishing Fans in Orange Beach, Alabama. 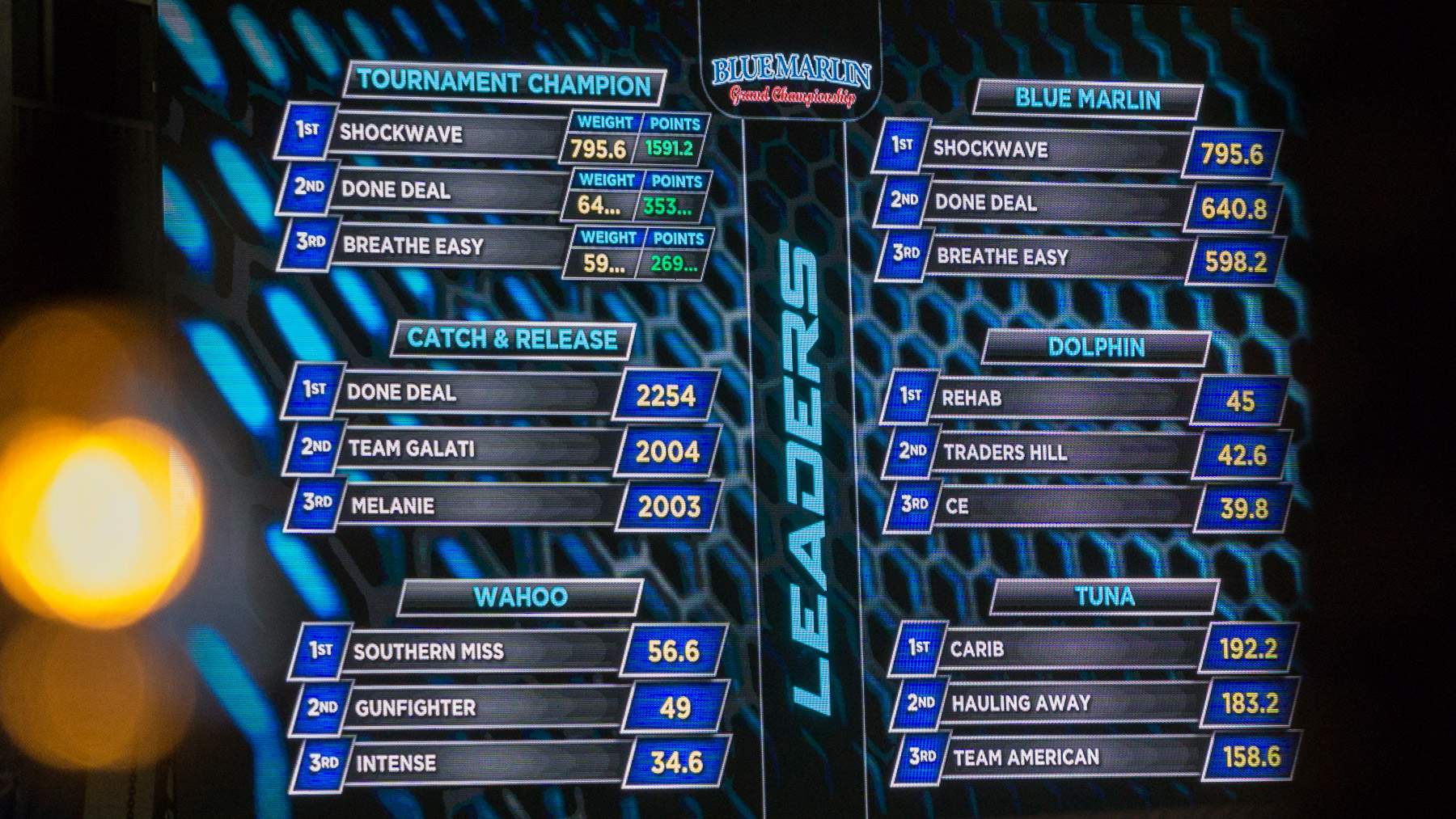 The Final Leader Board: Congratulations to all the Winners. 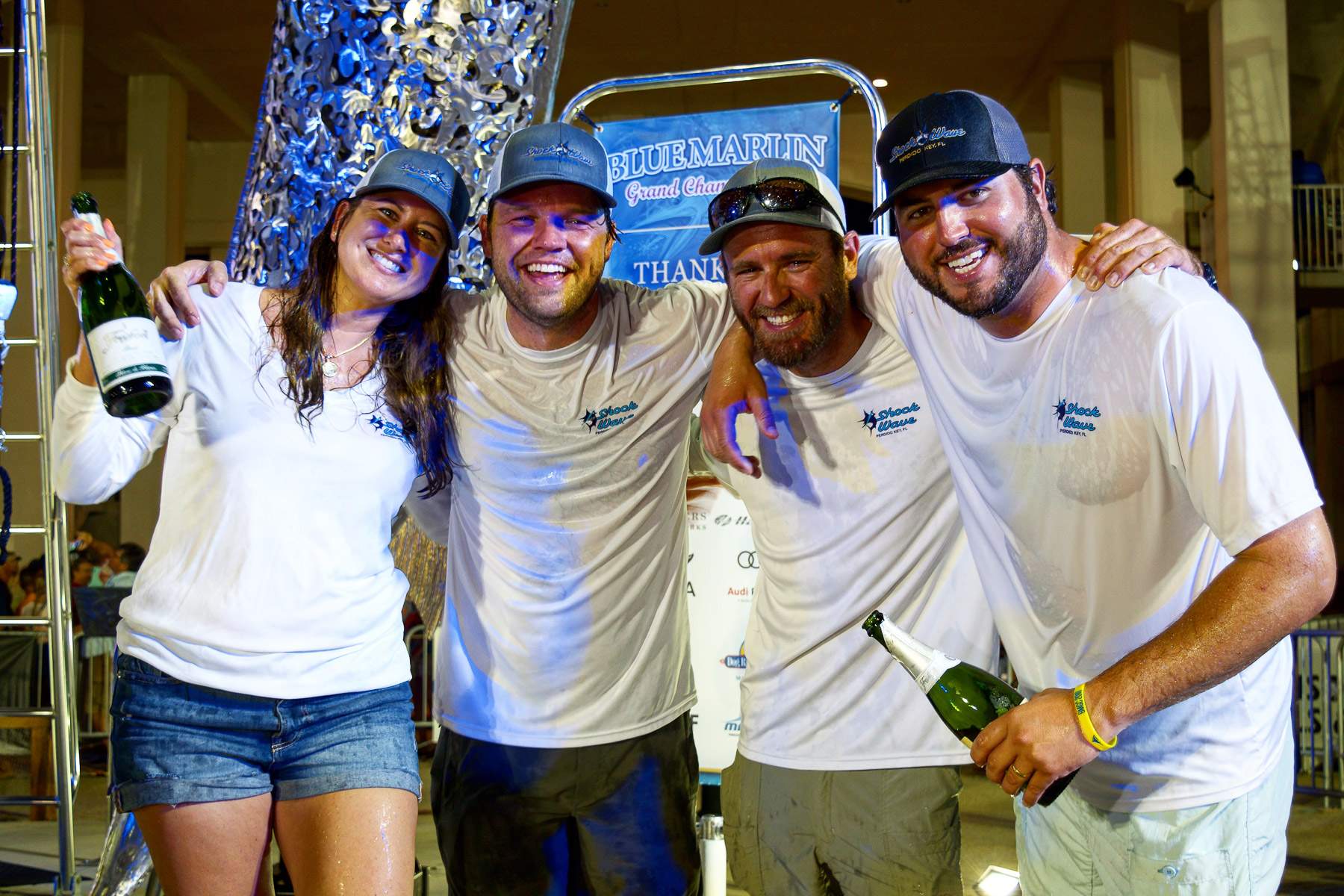 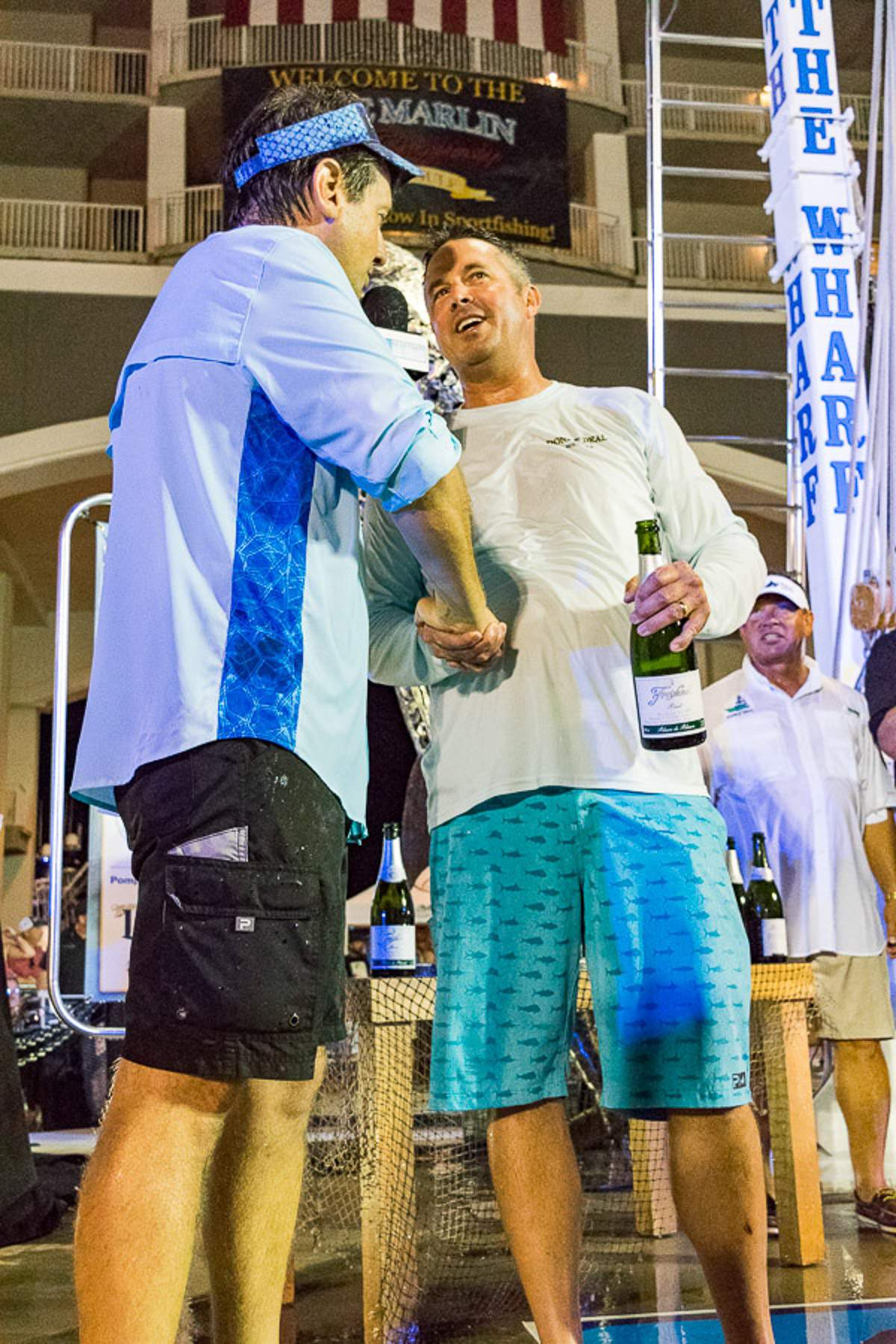 As the dust cleared, the 2018 Blue Marlin Grand Championship cemented it's legacy as the Greatest Show in Sportfishing. From the Miss Billfish Contest to epic fleet depature to the winning fish being brought to the scales, the BMGC is an event that we are proud to support! We couldn't do it without all the great people and organizations that make the event happen, including our retail partner, The Wharf Marina Outfitters Store . Thank you for working with us during the event and keeping everybody in Orange Beach dialed in with Pelagic Gear. 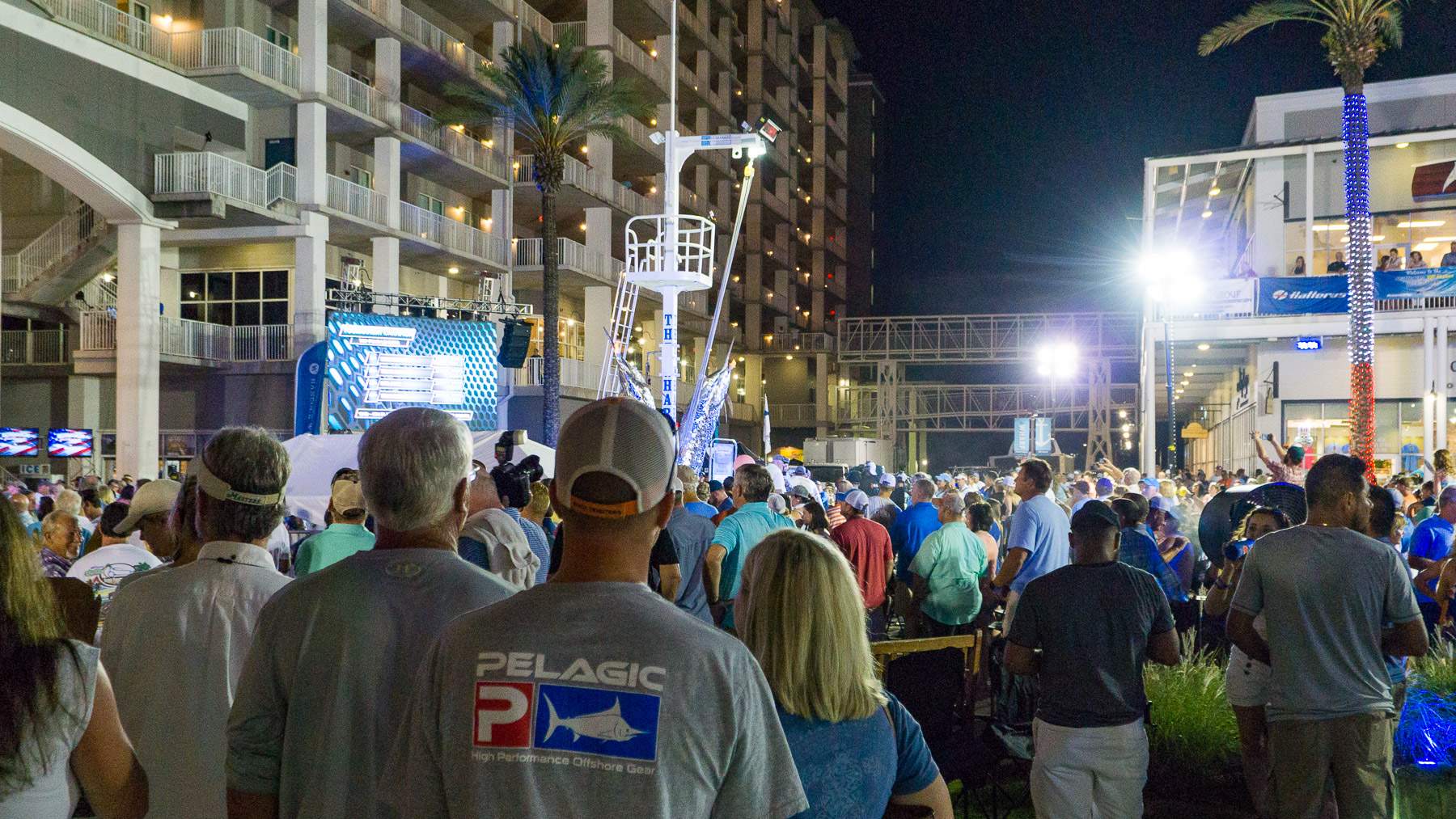 Standing Room Only! Just the way we like it. 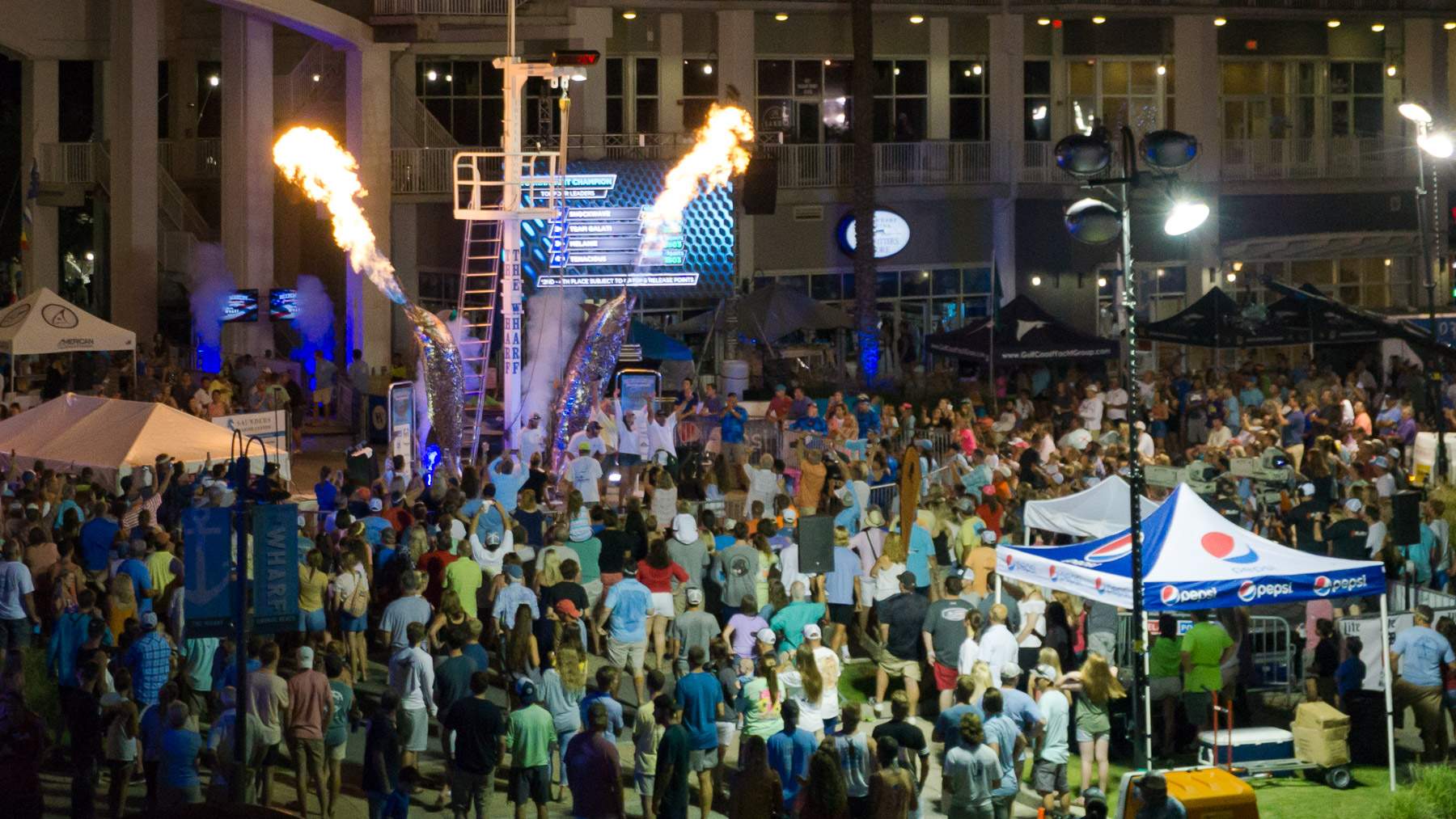 Truly the Greatest Show in Sportsfishing. Thanks for having us! 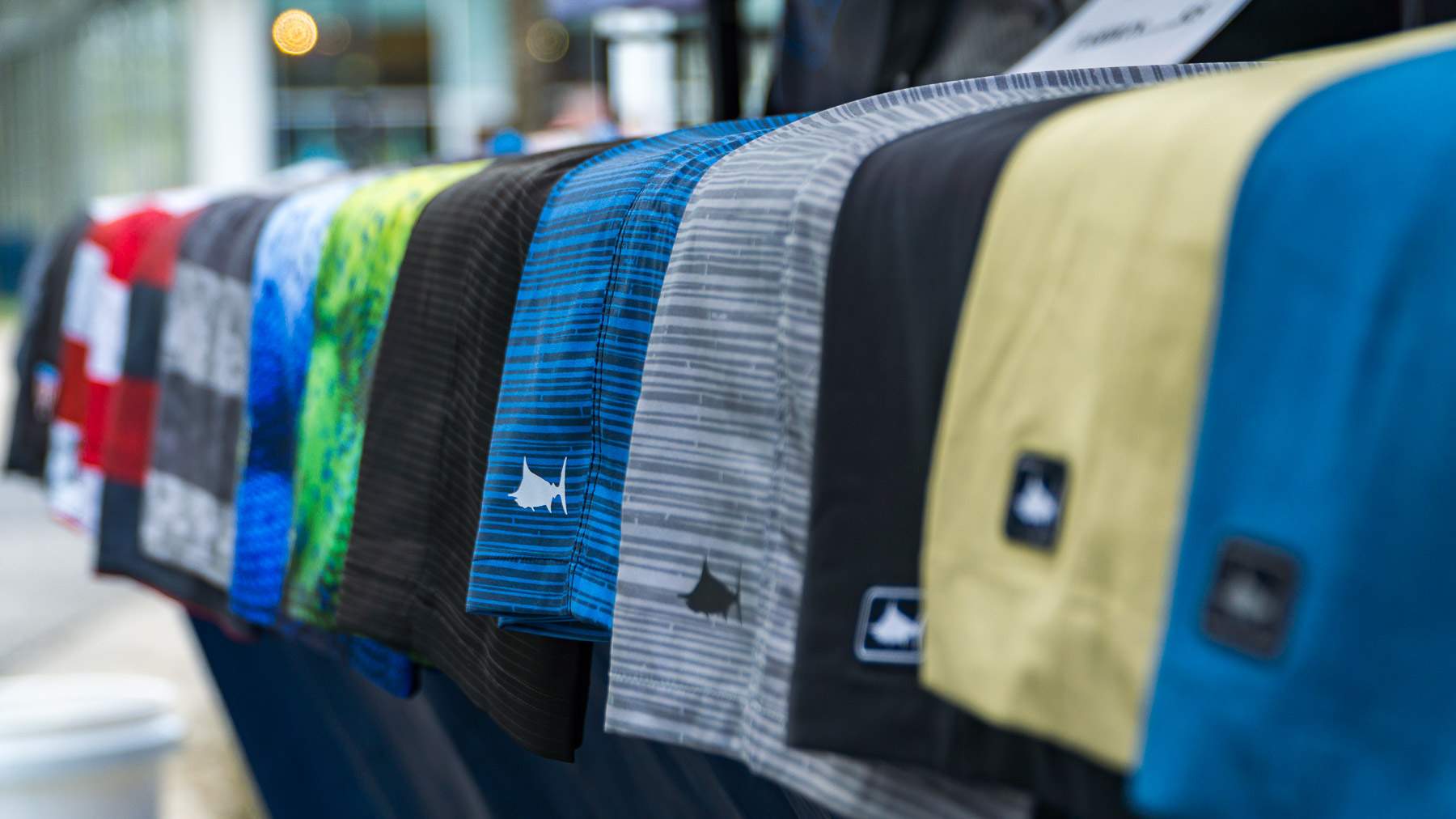 Visit the Wharf Outfitters for all your Pelagic Gear needs. See you next year!