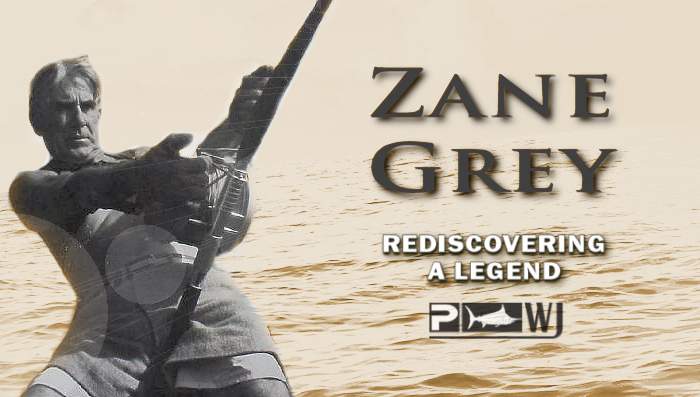 Angler's who have had the privilege to take a look back in the history of the sport of fishing will likely recognize the name of Zane Grey . Grey was born in January of 1872 in the small town of Zanesville, Ohio. Many people knew of Zane as the pioneer of big-game fishing. However, not many people knew much more about his life other than his great and impressive on the water accomplishments. Zane was a very intelligent and adventurous individual. In addition to his obsession with fishing, Zane was also great athlete and a very well accomplished writer.

Below : Zane pictured below in his natural element, also posing with his Nova Scotia Bluefin Tuna 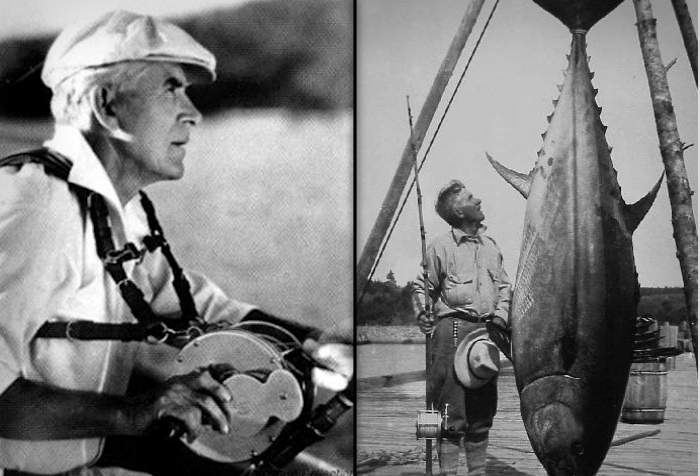 The Early Life of Zane

When time came, Grey chose the University of Pennsylvania on a baseball scholarship. His passion for the game led him to becoming an average pitcher. Grey though an indifferent scholar, barely achieving a minimum average. Outside class he spent his time on baseball, pool, and creative writing, While Zane did eventually play a single major league game in 1903 for the Pittsburgh Pirates, his ultimate career and talent would focus on writing with denistry as a quick speed-bump. After graduating, he continued his work in dentistry by opening up a practice in New York City , for Zane wanted to be close as possible to the various publishers to accomodate his writing. Over the course of the next decade, Zane would marry and have a family. He was often gone spending time fishing, writing, and discovering new mistresses.

Below : Zane had many impressive Marlin under his belt over the years, including the World Record (right) from Tahiti 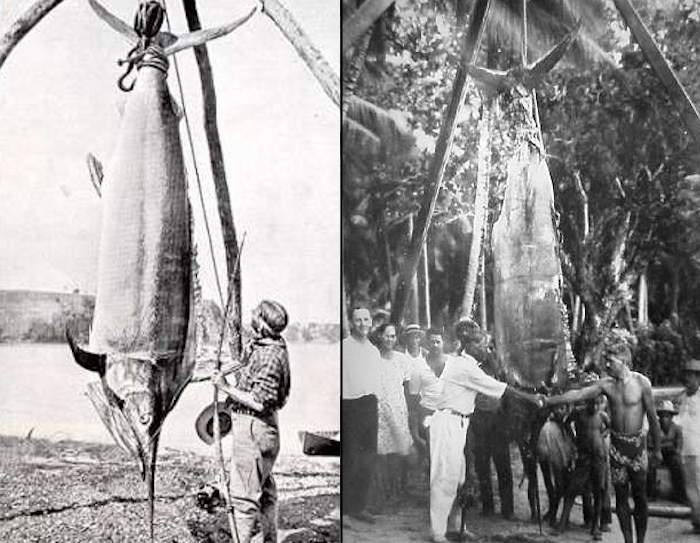 Zane would later move to Altadena, California . Grey summed up his feelings for the city: "In Altadena, I have found those qualities that make life worth living." During his profound writing career, Grey focused on several genres, but the most recognized themes were Western's and also writings about life on the water and fishing in general. One of Zane's earlier works was Riders of the Purple Sage , which Hollywood had bought the rights to. Infact, his Western emphasis on writing had such a strong following that nearly fifty of his novels were converted into over one hundred Western movies, the most by any Western author.

The success of Grey's The Lone Star Ranger (a novel later turned into a 1930 film) and King of the Royal Mounted (popular as a series of Big Little Books and comics, later turned into a 1936 film), inspired two radio series by George Trendle . Later these were adapted again for television, forming the series The Lone Ranger and Challenge of the Yukon . Many famous actors got their start in films based on Zane Grey books. They included Gary Cooper, Randolph Scott, William Powell, Wallace Beery, Richard Arlen, Buster Crabbe, Shirley Temple, and Fay Wray. It is said that Victor Fleming, director of Gone with the Wind , and Henry Hathaway, who later directed True Grit , both learned their craft on Grey films.

While Zane's novels were widely accepted (and also criticized for being over violent and displaying unmoral values in regards to the West), Grey did write several fishing novels. Some of these works are ' Tales of Fishing Virgin Seas ', ' Tales of Swordfish and Tuna ', ' Tales of Freshwater Fishing ', and ' An American Angler in Australia '. Ultimately, Grey would become one of the first millionaire authors.

Below : Zane pictured below (left) with a Mako Shark, and with his brother R.C. (right) with several Amberjack 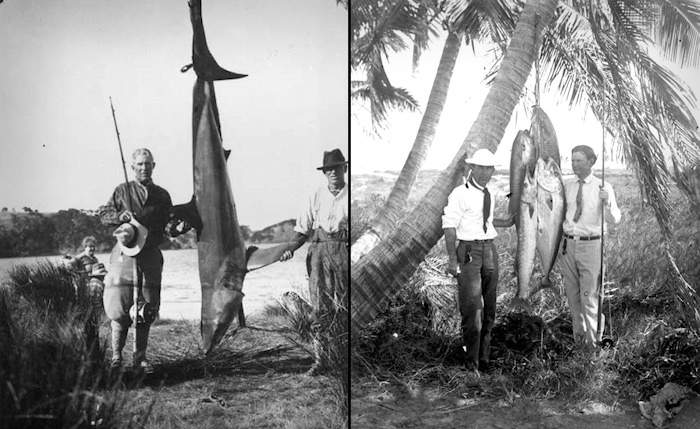 Zane in his Element

With financially being set due to his great writing success (over 90 books, being on Top 10 Best-Sellers list 9 times), Zane Grey would contiue his adventurous ways by traveling and fishing the oceans of the world. It is said that during his adult life, Grey fished over 300 days a year. Grey and his brother R.C. were often found in Florida where they helped establish the Long Key Fishing Club . The brothers were often seen seeking out the great Sailfish fishery. Zanes interest would often bring him to the waters off New Zealand and Australia .

Grey established a base at Otehei Bay Lodge on Urupukapuka Island which became a magnet for the rich and famous and wrote many articles in international sporting magazines highlighting the uniqueness of New Zealand fishing which has produced heavy-tackle world records for the major billfish. Records were set for Striped marlin , Black marlin , Blue Marlin and Broadbill Swordfish . He held numerous world records during this time and invented the teaser, a hookless bait that is still used today to attract fish.

Below : Zane poses with the World Record Tiger Shark caught in Australia 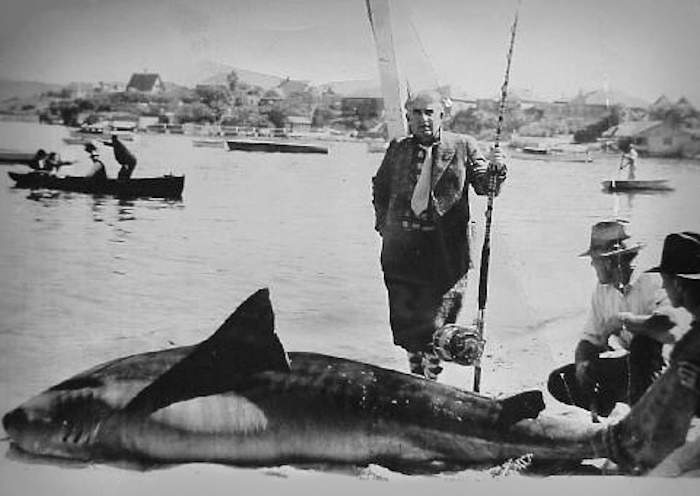 Grey fished out of Nova Scotia for many summers and set a world record for the largest Blue Fin Tuna on August 24, 1924 when he caught one weighing 758 pounds. Grey also helped establish deep-sea sport fishing in New South Wales, Australia particularly in Bermagui, New South Wales, which is famous for Marlin fishing. Patron of the Bermagui Sport Fishing Association for 1936 and 1937, Grey set a number of world records, and wrote of his experiences in his book " An American Angler in Australia ".

From 1928 on, Grey was a frequent visitor to Tahiti . He fished the surrounding waters several months at a time and maintained a permanent fishing camp at Vairao. He claimed that these were the most difficult waters he had ever fished, but from these waters he also took some of his most important records, such as the first grander Marlin over 1000 pounds.

Zane Grey's impact on the sport has made it what it is today. Millions of anglers take to the sea to become one with nature and the hopes of encountering a great battle. With many World Records to his acclaim, Zane built the foundation of big-game fishing. 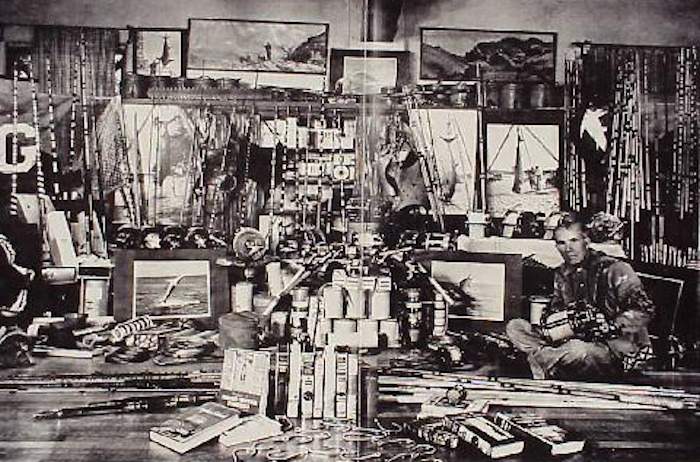 *Some material sourced from wikipedia and other relevant websites